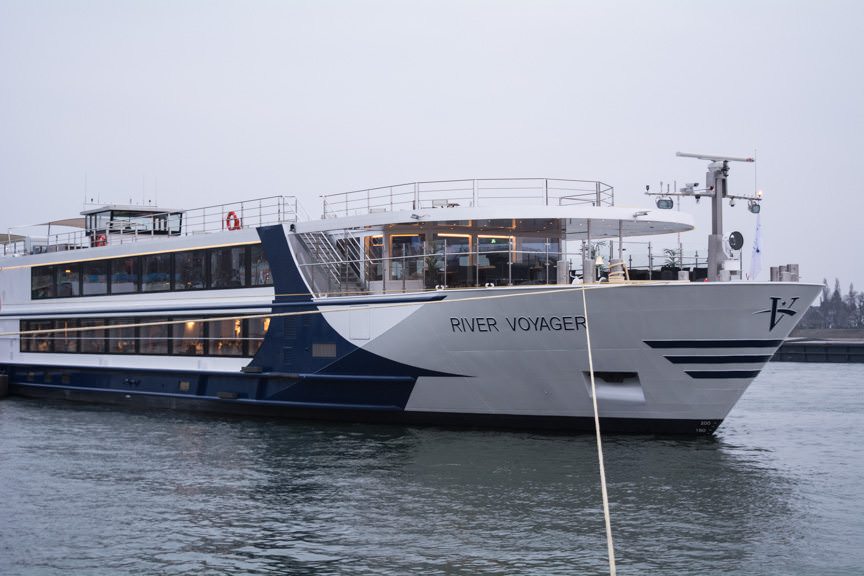 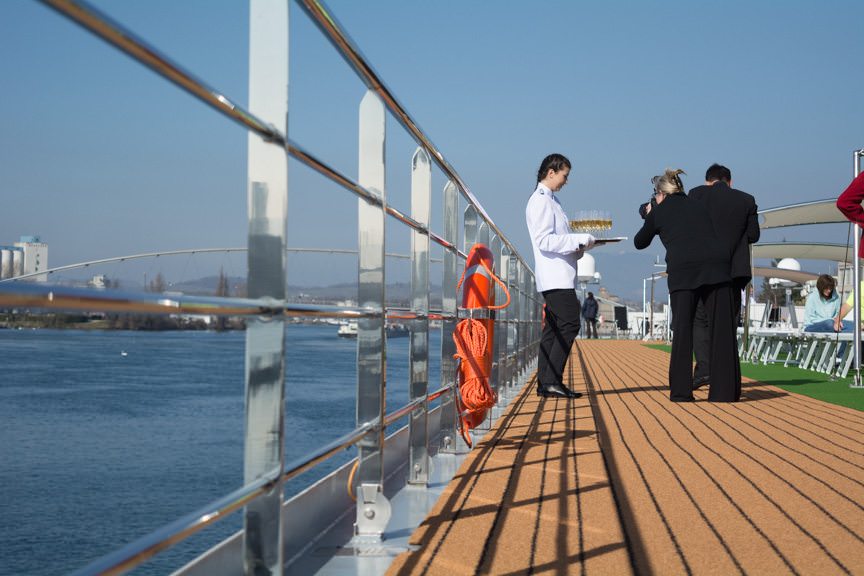 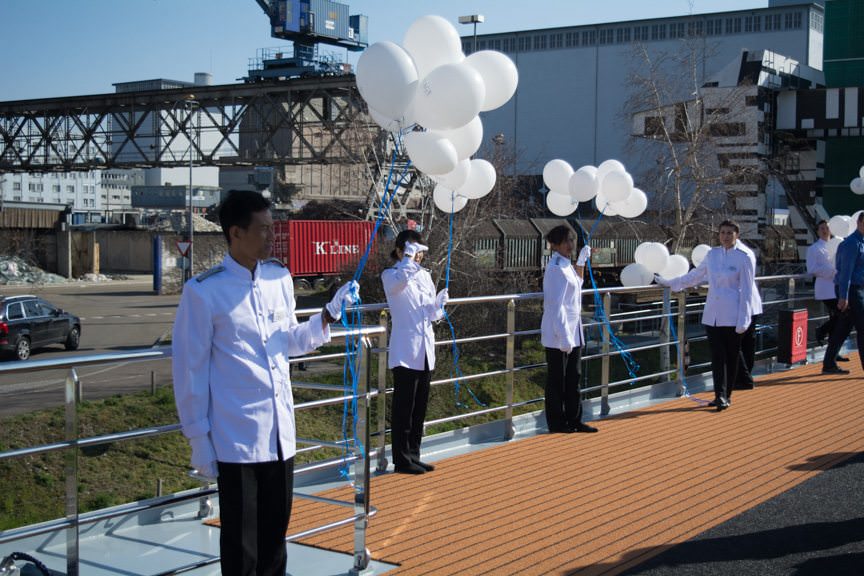 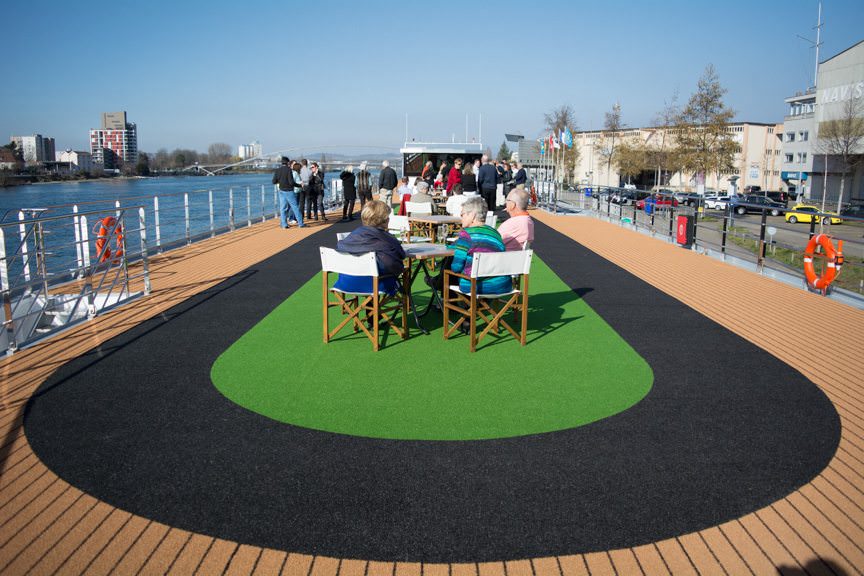 A small group of guests and invited media were on hand for the festivities. Photo © 2016 Aaron Saunders

The newest and most elaborate ship in the fleet, River Voyager has been designed with the American traveller in mind. Its interior design pays homage to the Jazz city of New Orleans and to some of the genre’s most enduring artists. But this new vessel also represents an important new page in the history of Vantage, as the line increases the quality of its newbuilds and reaches out to a more international, English-speaking audience. 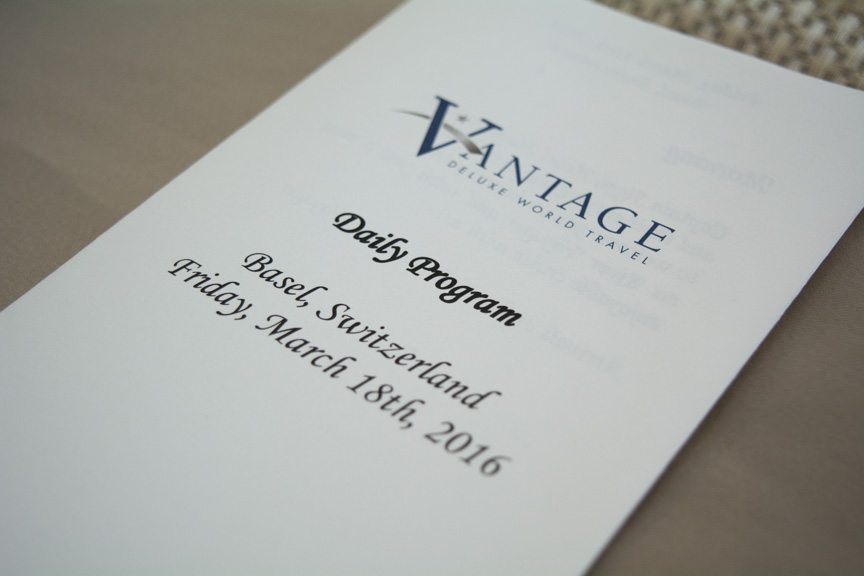 It’s also the first Vantage ship we have covered here on River Cruise Advisor. Since this is a nonstandard repositioning voyage from Basel up to Amsterdam, it only seems appropriate to focus on the line and the ship with more in-depth coverage rather than day-to-day reports. And what better way to start than with five of the things that have surprised me about the brand-new River Voyager. 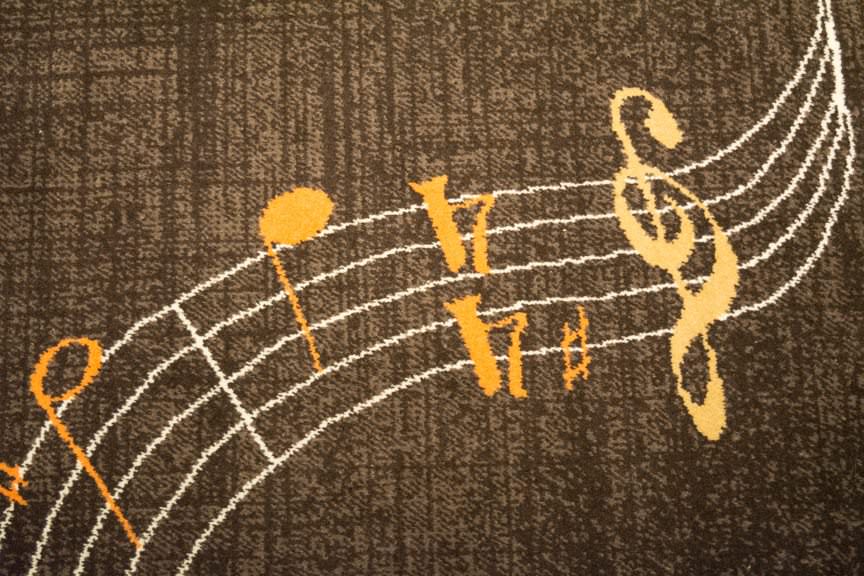 This random River Voyager carpet shot reveals the jazz and music theme that runs throughout the ship. Photo © 2016 Aaron Saunders

The 442-foot long River Voyager features an overriding Jazz theme throughout the vessel; a first for the company. From the Cotton Club Lounge to the named suites that reflect Jazz greats in iconic images, quotations and readable biographies, this Jazz Music theme works better than I’d initially imagined. 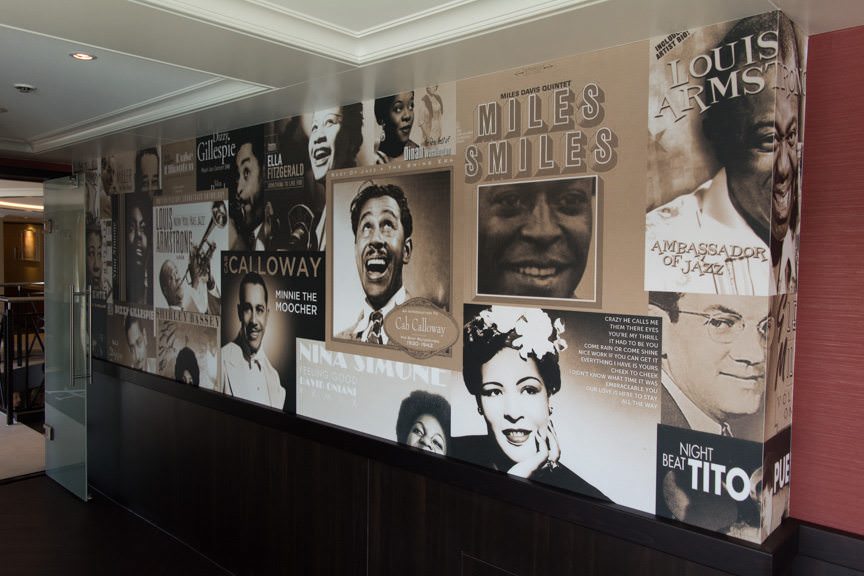 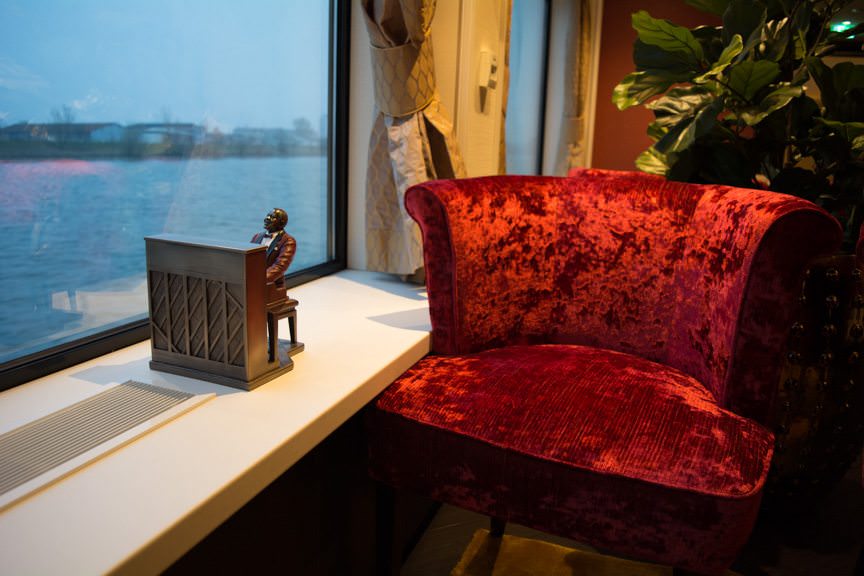 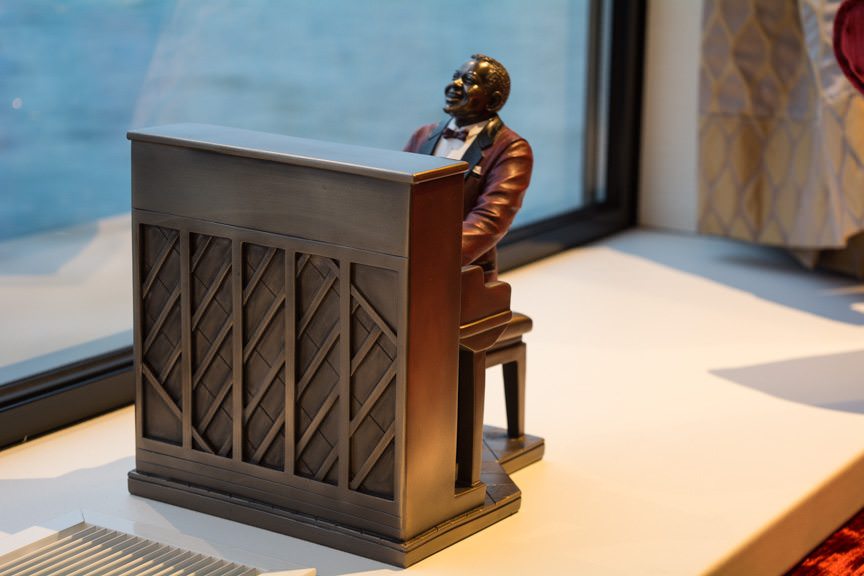 While New Orleans may be nowhere near the Rhine, River Voyager’s jazz gives Vantage a more distinct voice that is wholly unique among American-based river cruise lines operating in Europe.

It’s not all jazz, either. In many ways, River Voyager feels like the designers took a page or two from the AmaWaterways playbook – and that’s a compliment. Trim and general fit and finish throughout the ship reminds me substantially of AmaWaterways’ AmaLyra, from the recessed lighting, crown moulding along stateroom ceilings, and the ship’s “columned” corridors.

The result is a classy-looking vessel that should age well.

2. The Accommodations Will Surprise You 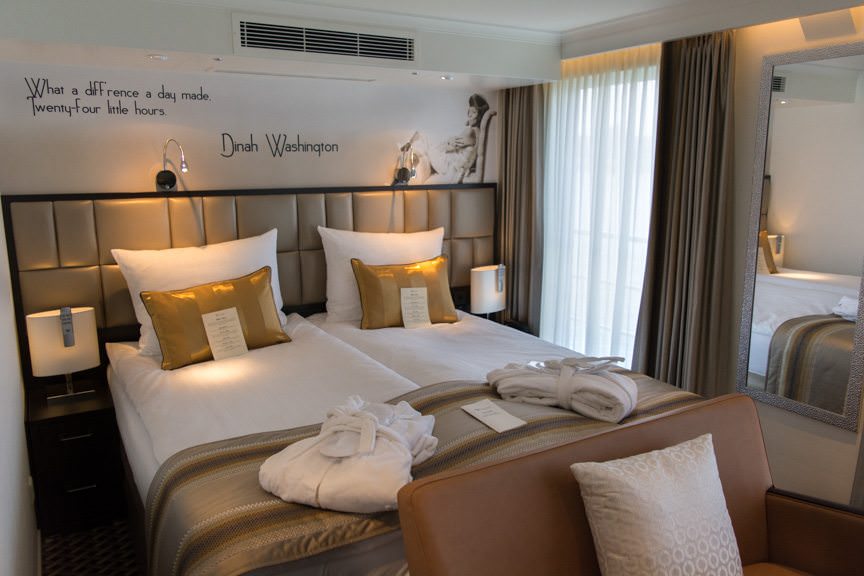 Each of River Voyager’s Deluxe Suites are named after a jazz great. Shown here is suite 411: the Dinah Washington suite. Photo © 2016 Aaron Saunders

If the Jazz theme is inspirational, River Voyager’s suites are worth writing home about. Sure, we can sit here all day and debate whether they’re really suites (Viking insists, rightly, that suites feature separate living and sleeping rooms), but let’s not split hairs: River Voyager’s larger-than-average rooms pack an accommodations punch. 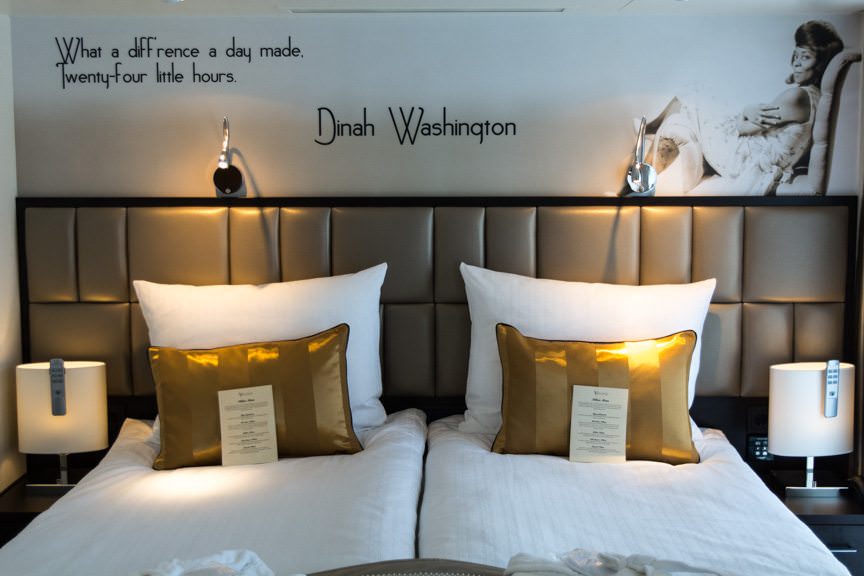 Measuring 250 square feet apiece, the 12 Large Deluxe Suites aboard River Voyager are not the largest on the rivers of Europe, but they are spacious, comfortable and unique thanks to the onboard jazz theme. Each suite is named after a different Jazz legend, with my own suite – 411 – being the Dinah Washington suite. Inside, a biography of Washington has been placed on the desk, and an attractive mural adorns the headboard and features a photograph of Washington alongside a quote. 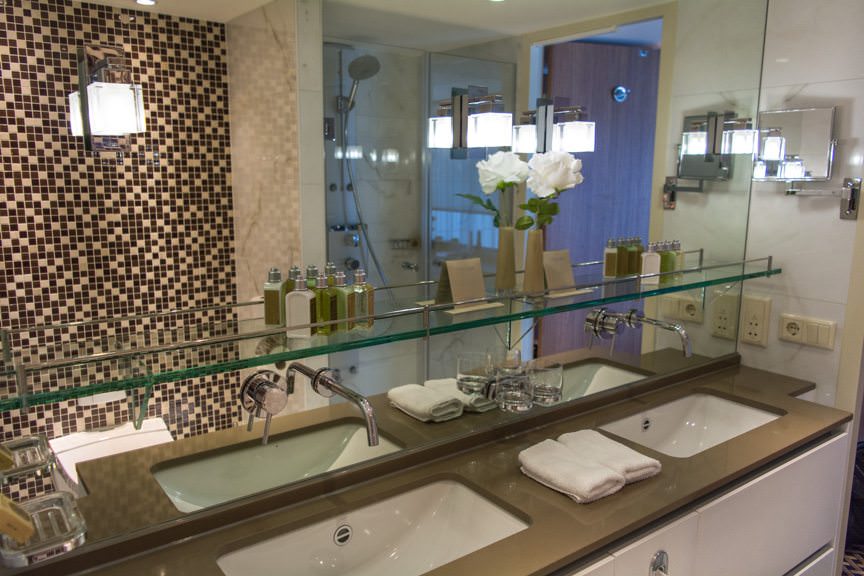 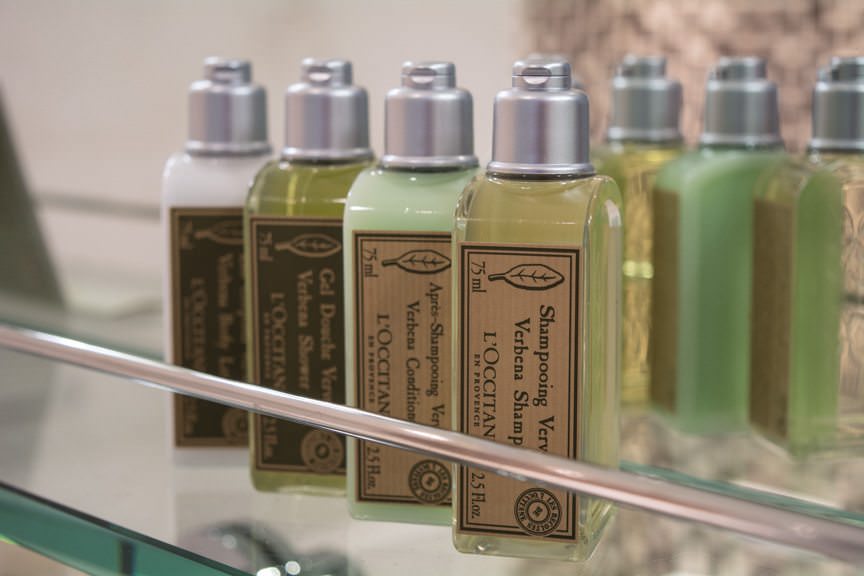 These named Deluxe Suites feature a French balcony and one fixed window adorned with drapes that open remotely via a panel located next to the bed. The beds are also controlled remotely: As Queen or individual double beds, they can be raised or lowered with the push of a button. A pillow menu featuring half a dozen different types from hypoallergenic to horsehair is also available.

A large LG flat-panel television is inset into the wall, and offers up complimentary video-on-demand movies, itinerary information, music, live television, and details of other Vantage river cruises. 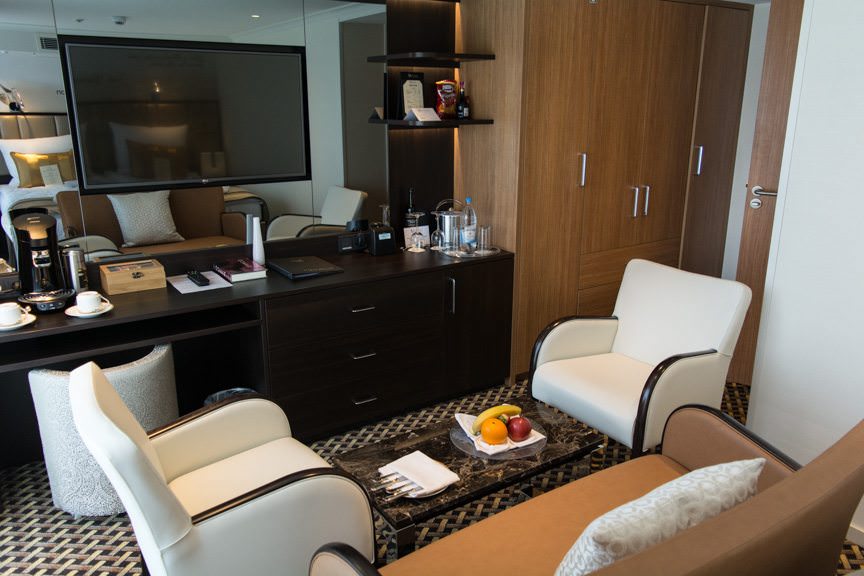 Every stateroom onboard features an iHome dock that is compatible with the iPhone 5 or later. At least one US-style power outlet is featured in every room, and multiple two-pronged European outlets are available, so bring an adapter and converter (if needed) for maximum charging power.

Deluxe Suites aboard River Voyager also include a podded coffee machine and a beautiful little box bursting with Meßmer teas. Closet space is decent, and should be enough for two people travelling together.

Nearly all staterooms and suites aboard River Voyager feature French balconies that are perfect for admiring the scenery. Photo © 2016 Aaron Saunders

The real “wow” factor comes with the bathroom. Excessively large, Deluxe Suite bathrooms are clad with marble and feature dual sinks, a jetted whirlpool tub, and a full-sized shower featuring an adjustable showerhead and up to six horizontal jets that can be turned on or off as needed.

This attractive bathroom also features two separate lighting options, with the ceiling pot lights and mirror lamps on different switches. French-milled L’Occitane toiletries and some of the fluffiest towels you’ve ever felt complement the amenities. You’ll never want to leave. 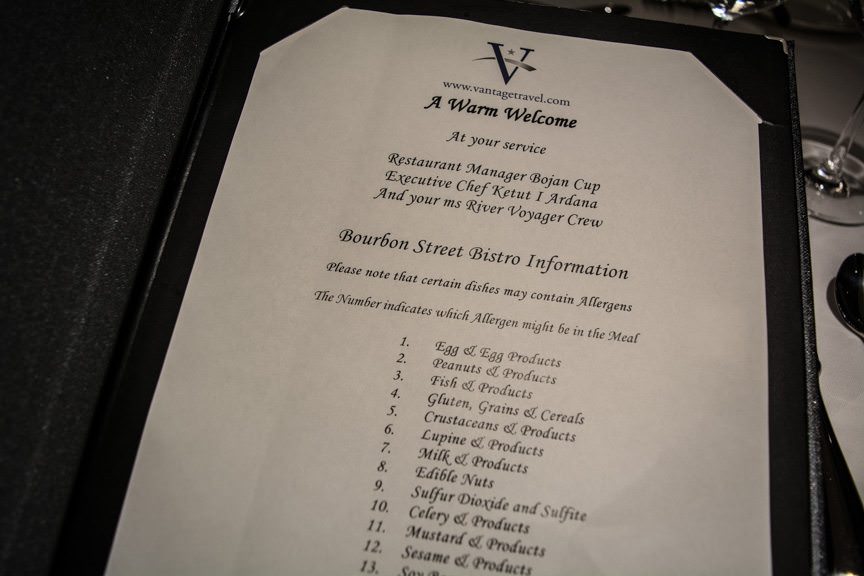 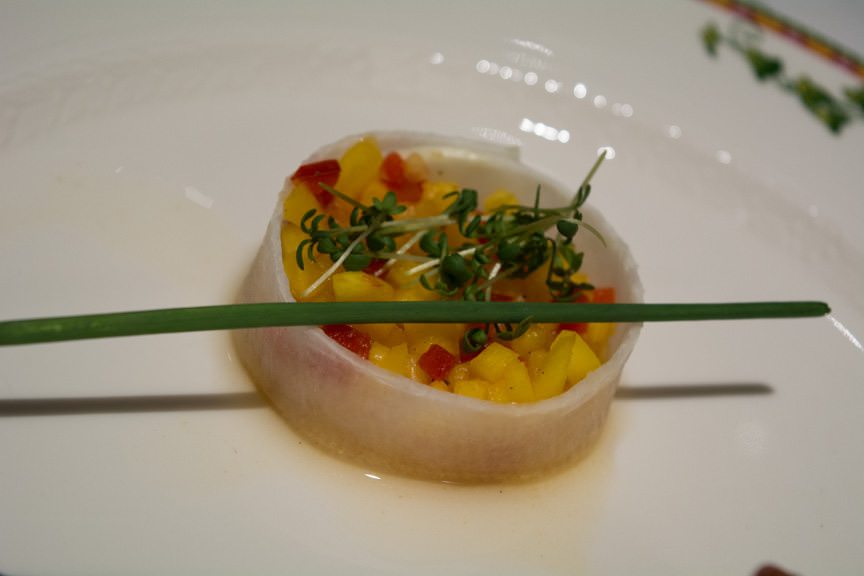 … and those allergens are listed next to each dish via a numerical numbering system. Photo © 2016 Aaron Saunders

I have an allergy to nuts. Because of that, I have to be exceedingly careful when I travel. Vantage, though, dramatically eased my mind during my first lunch onboard by presenting menus with a numbered list of allergens. These numbers are listed next to the dishes onboard, giving you an indication as to what, if any, allergens ae present in meals.

You should still tell your wait staff if you have any specific dietary requirements in order to double-check, but Vantage’s informative menus take the guesswork out of picking the meal that’s right for you.

4. The Ship Is Soundly Built 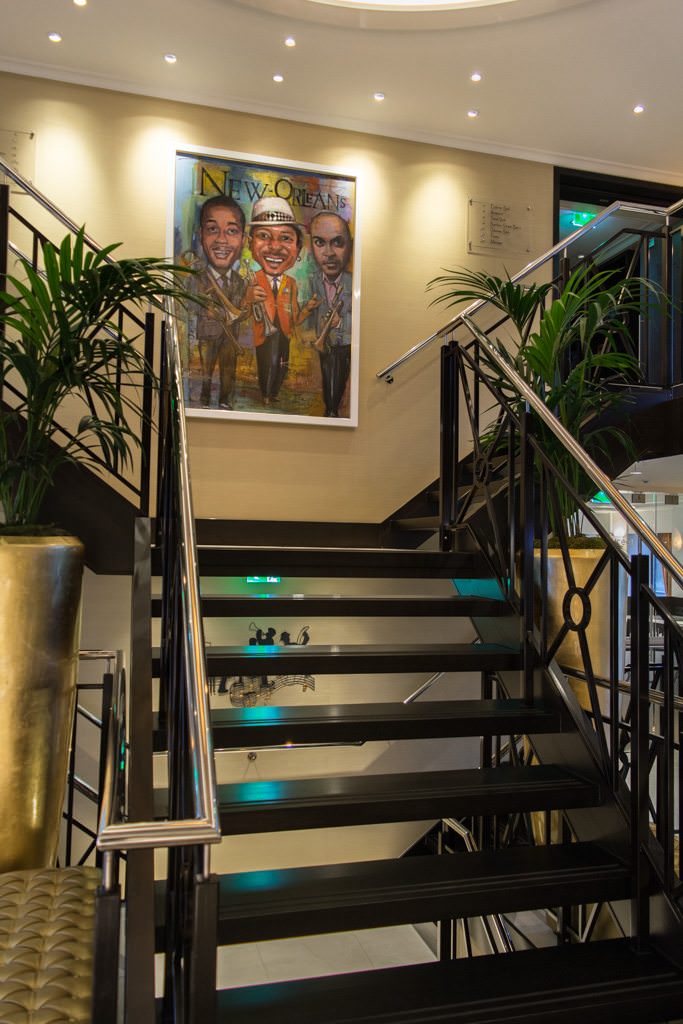 Many river cruise ships aren’t as whisper-quiet as Viking River Cruises’ Viking Longships. A bit of engine noise bleed-through isn’t uncommon, and I’ve been on more than a few river cruise ships that have shook terribly towards the stern of the vessel, where the propellers are.

Happily, River Voyager isn’t like that. Instead, the vessel is quiet and smooth, even at the extreme stern of the ship. Soundproofing between staterooms and suites is very good, with almost no noise bleed-through at all. 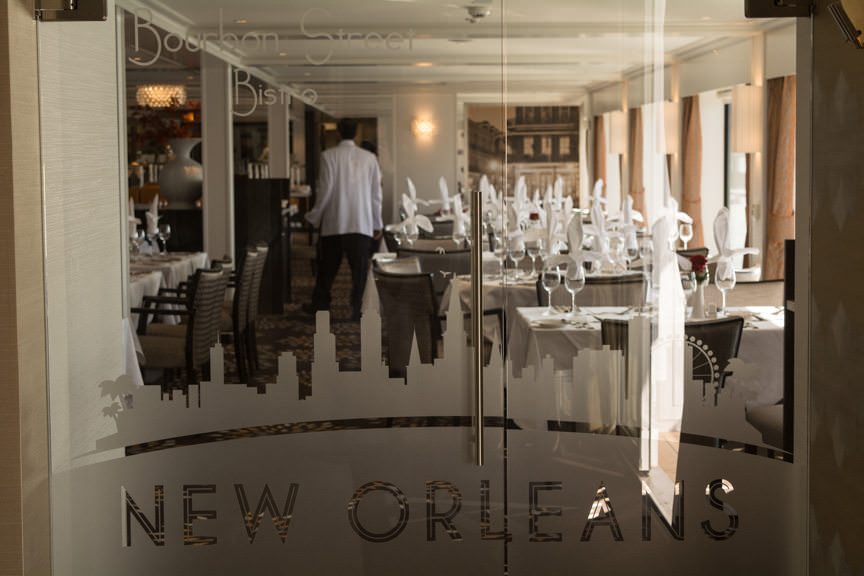 Vantage has historically catered exclusively to an American clientele. Now, the line is reaching out to Canadians and UK cruisers too. Photo © 2016 Aaron Saunders

Vantage has long catered to American travellers; the company’s website even takes great pains to mention this. But with Vantage beginning to court travellers from Canada, the United Kingdom and Australia, that American-ness is being tempered with just the right amount of European and international influence.

Privately, I’d worried about not being able to find local food – from ingredients to beers – onboard. The thought of being inundated by buckets of Pabst Blue Ribbon on the rivers of Europe is more than I can bear. Fortunately, that couldn’t be further from the truth. While it is true that Vantage caters to a largely (North) American audience through things like culinary options and North American outlets in rooms, Vantage is far from being a slice of Americana on the rivers of Europe – and that’s a good thing. 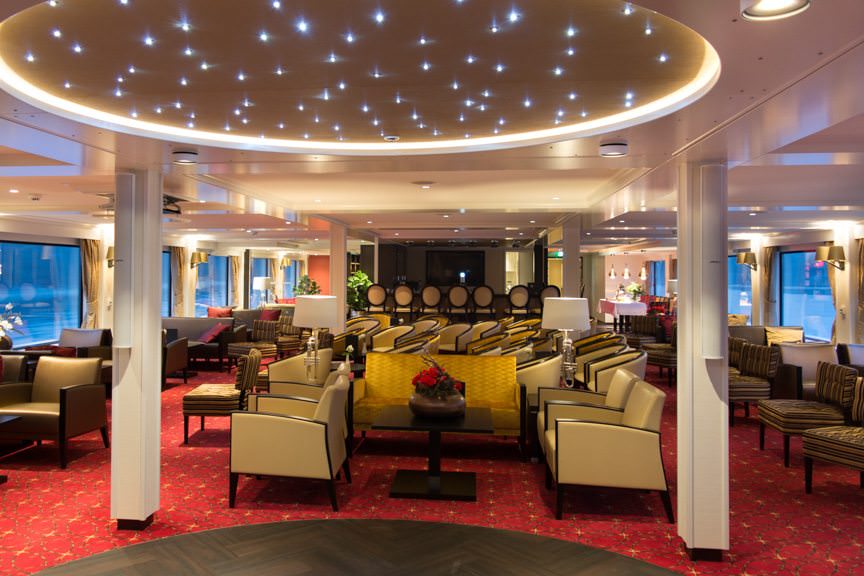 The Blues Note Lounge offers up multiple local beer options, with the standard “go-to” brew being the Veltins Large for €4.90. Dishes are European-sized, yet cuisine has largely been adapted for the American palette. English is spoken throughout the vessel, and North American-style electrical plugs are included in every stateroom category. The crew, both European and Asian, are dedicated and eager to please. 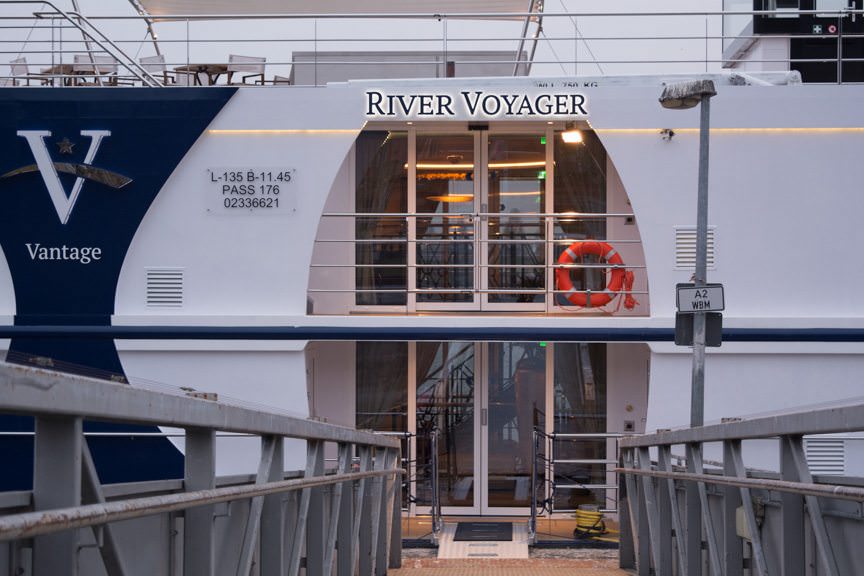 The best way to describe Vantage isn’t “American” — it’s “North American.” And you don’t have to be a resident of the United States to enjoy it.

Vantage has aggressively priced its product within the United States, however, and the new River Voyager is an attractive option for cruisers of any nationality looking to take a European river cruise. 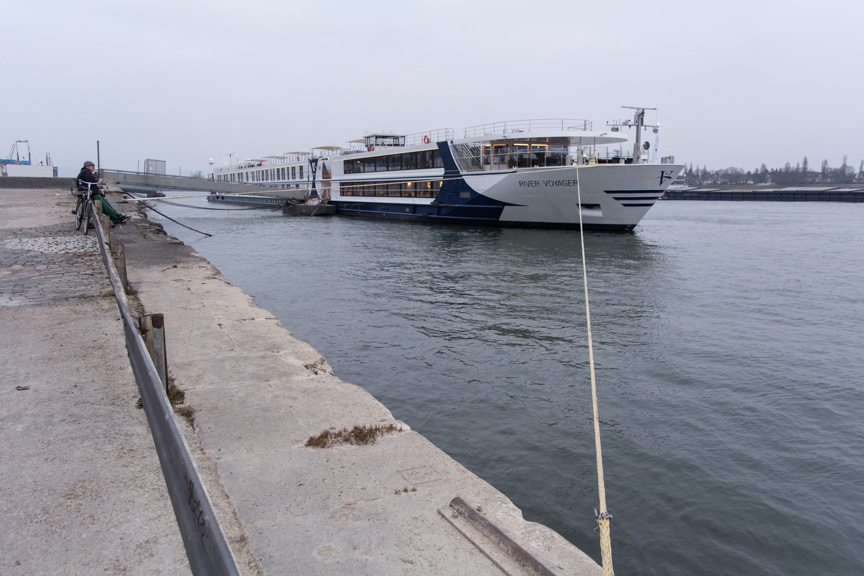