You are here: Home / Destinations / Europe / Germany / A Sunday In Mainz

A few weeks ago, I sailed aboard Vantage Deluxe World Travel’s River Voyager on a short repositioning voyage from Basel, Switzerland to Amsterdam, Netherlands. Along the way, we found the time to stop in Mainz to for a quick taste of this historic German city. 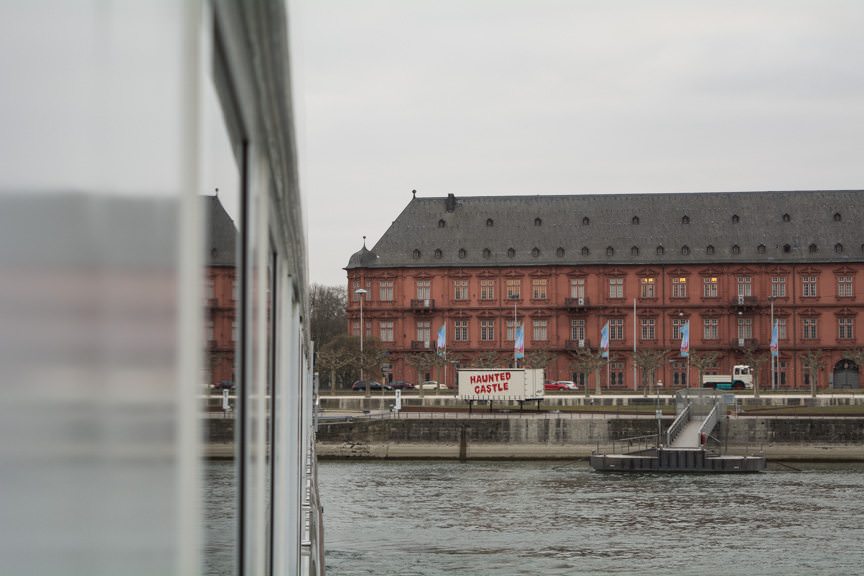 It was under cloudy skies and chilly weather conditions that we set out on a walking tour of Mainz on a blustery Sunday morning. Even for March, the weather was abnormally chilly; if you’re taking a Rhine river cruise near the start of the season, you’ll want to bring a heavy coat, gloves and a scarf.

The capital of Germany’s Rhineland-Palatinate region, Mainz (pronounced mines) was founded by the Romans in the first century and today is famous for two things: it’s long-standing rivalry with the town of Wiesbaden, situated directly across the river; and the movable-type printing press, invented here by Johannes Gutenberg in the 1450’s. 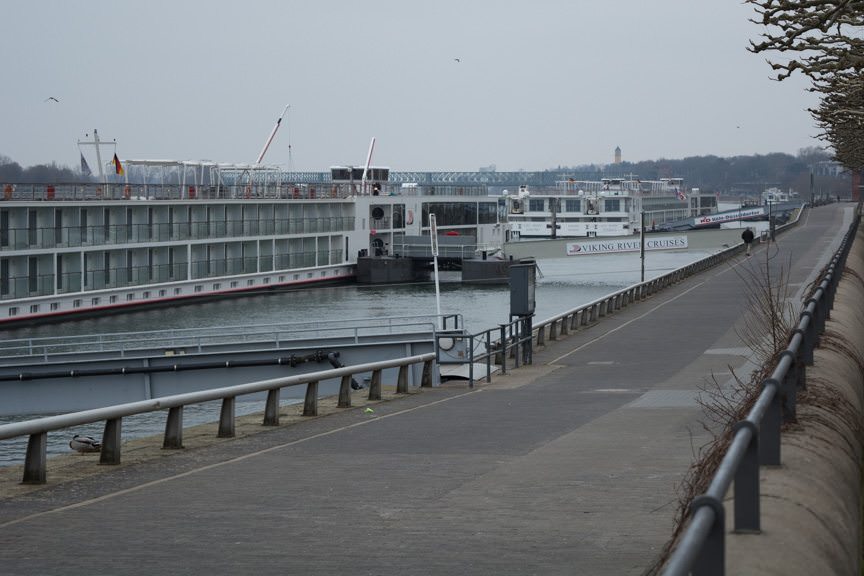 Over 80 percent of Mainz was destroyed by repeated bombing raids during World War II. Interestingly, these raids left the town’s primary cathedral, Mainzer Dom, relatively intact. The Cathedral, it turns out, was used by bombers as a landmark to identify when they were flying over Mainz. You don’t bomb your landmarks.

The cathedral, like the town, was restored to its former glory, just in time for Mainzer Dom to celebrate its 1,000th birthday in 1975. 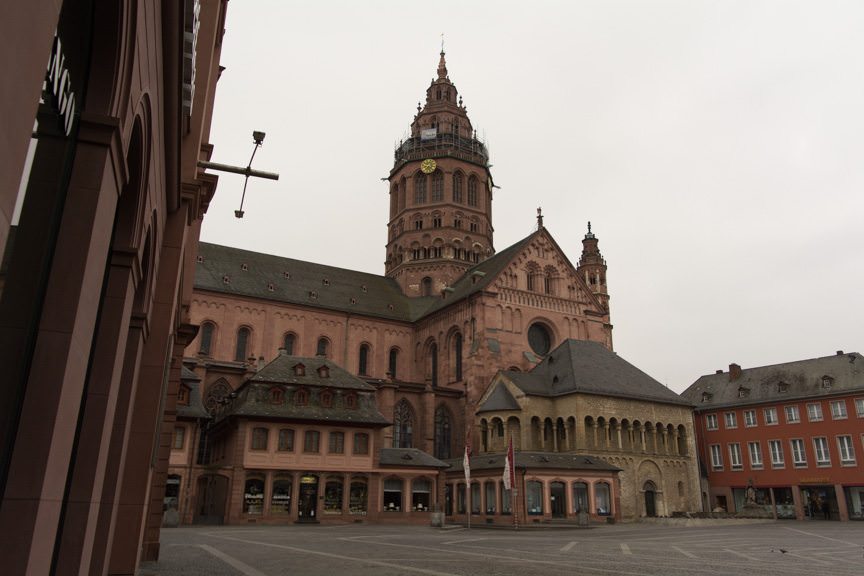 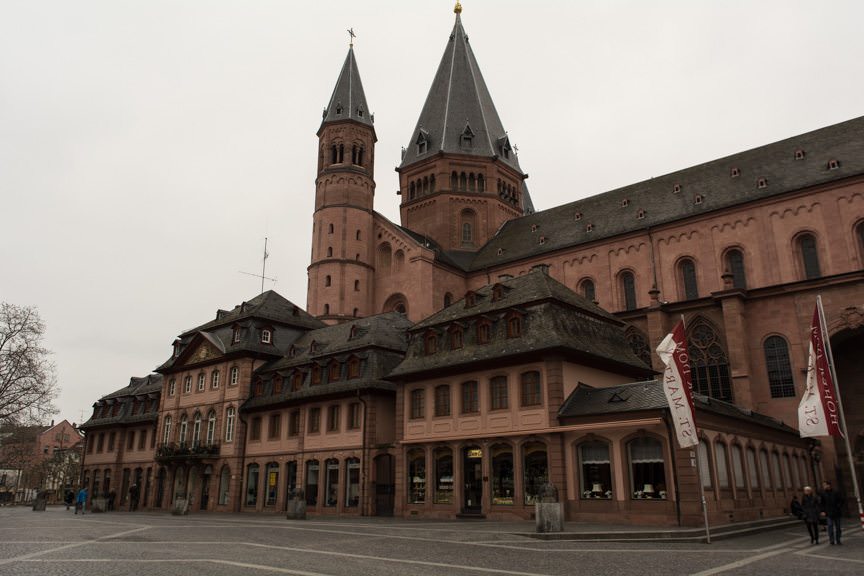 From the river cruise docks, which are separated by the arched Theodore Heuss Bridge that separates Mainz from Wiesbaden, walking into town is a snap. It’s a 15-minute stroll to the historic town center at best, making travelling by foot easy. Our guide led us on a leisurely walk through the town center, explaining the history and the odd hodgepodge of architecture to us as we went.

Like other river cruise lines, Vantage uses the portable QuietVox audio systems for its excursions ashore. If you’ve river cruised before, you know the drill: Pop the headset in your ear. Get near to your guide. Switch the device on. The device finds the frequency your guide is on. You hear her (or him). Begin touring. 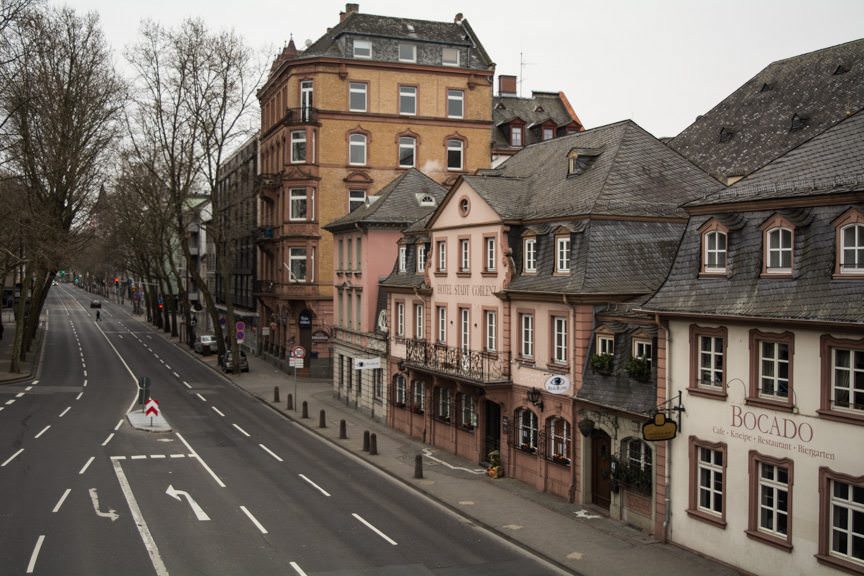 More than 80 percent of the town was destroyed during the Second World War, but some excellent historic buildings have survived. Photo © 2016 Aaron Saunders

Touring with Vantage isn’t so dissimilar from touring with any other river cruise line. Guides are of a high quality. They’re almost always locals, and they speak excellent English.

Our guide for our day in Mainz, Claudia, was no exception. Her stories about the longstanding rivalry with Wiesbaden became a subject of constant entertainment for us. “They say the best thing about going to Wiesbaden,” she said with a smile as we stood along the riverbank, “is that it gives you an excellent view of Mainz.”

Our guide describes the history of Mainz – and its long-standing rivalry with Wiesbaden, just across the Rhine. Photo © 2016 Aaron Saunders

I love Europe, and in particular, I love Germany. I think it’s a beautiful country filled with fascinating people and more history than you can shake a stick at. Sadly, that friendliness doesn’t extend to the town’s principal tourist site, the Gutenberg Museum.

Vantage arranged to have the Gutenberg Museum opened early for us. Which is spectacular, all the credit to the line for that. What Vantage can’t control, however, is the miserable attitude of the employees at the museum. 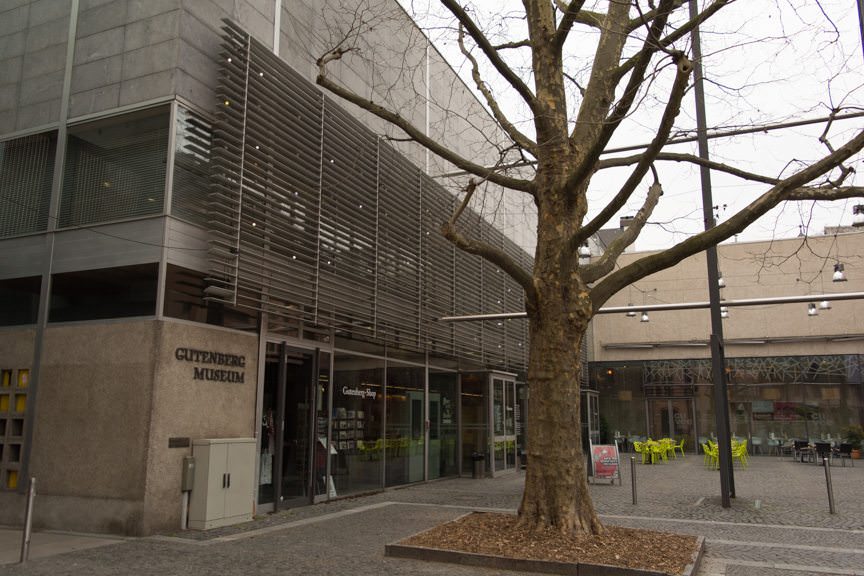 At the museum, you are corralled as if you are visiting a top-secret military installation. You’re not allowed to leave your group – ever. You’re not allowed to look at other exhibits – ever. Simply taking my eyes off my guide and turning around to look at a book – underneath two layers of protective glass and accompanied by an English placard – got me a scolding from one of the staff members. “You must join your group!” he barked.

I turned back around and watched as he continued to bark at other guests who were doing what you’d expect in a museum: looking at the exhibits. Turns out that is simply not allowed. You must look at your guide at all times. If you take your eyes off your guide, you get a talking to. 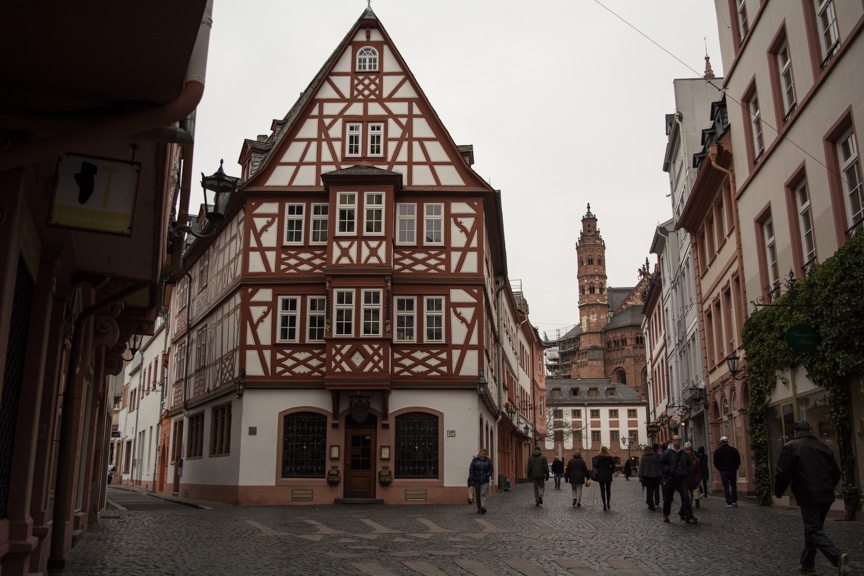 And that’s the cheery welcome you get at the Gutenberg Museum. The printing press is amazing. I was so looking forward to seeing the beautiful books they have on display. Instead, we were herded around by the museum staff as if we were small children with chocolate on our hands. All told, it’s the best museum I’ve never seen – despite the fact I’ve been there.

Our unwelcome welcome aside, it’s worth bearing with the museum if only to see the printing press. But then, it’s best to high-tail it out of there and go explore this fascinating city.

Despite the fact that much of Mainz was destroyed in the war, the city isn’t lacking personality. The main Rathaus – or City Hall – looks like something straight out of Robocop, while art installations transform otherwise nondescript buildings and squares from their bland postwar architecture into unique works.

The city also sports an unusually decent shopping district (closed Sundays) that offers all the latest designer fashions and diversions. 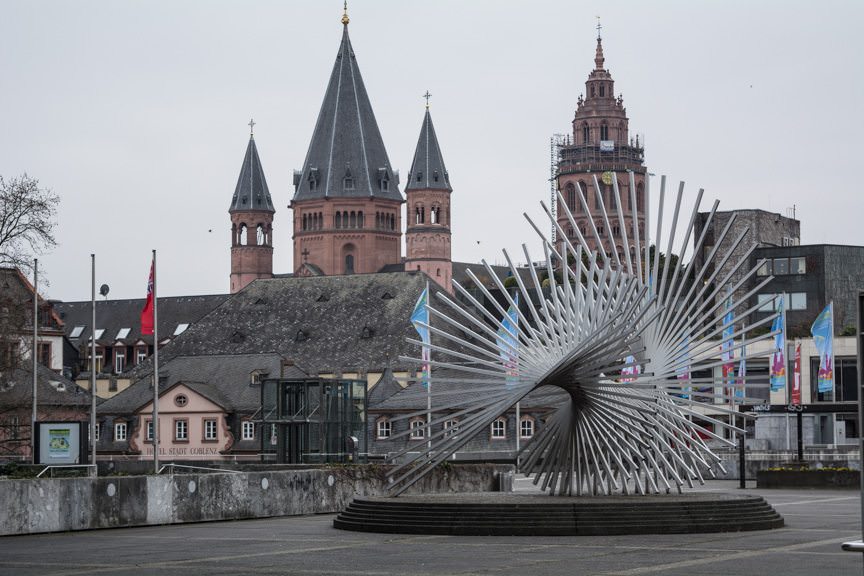 Art installations help give Mainz a modern look and feel, while paying homage to the town’s heritage. Photo © 2016 Aaron Saunders

A cautionary tale: On a quiet Sunday, when you can see people coming from a mile away, three of our guests managed to become the victims of a skilled pickpocket. The one thing all three had in common: They all went to Sunday services at the Mainzer Dom. So, even in church, it’s best to guard your valuables when you travel.

If you’re sailing upriver (toward Amsterdam), be sure to be out on deck following your departure from Mainz. Near the city of Rudesheim, you can spot the remains of the Hindenburgbrucke – or Hindenburg Bridge – that was created in 1915 and destroyed by bombing raids in 1945. It was never rebuilt, but its abutments can still be seen to this day. 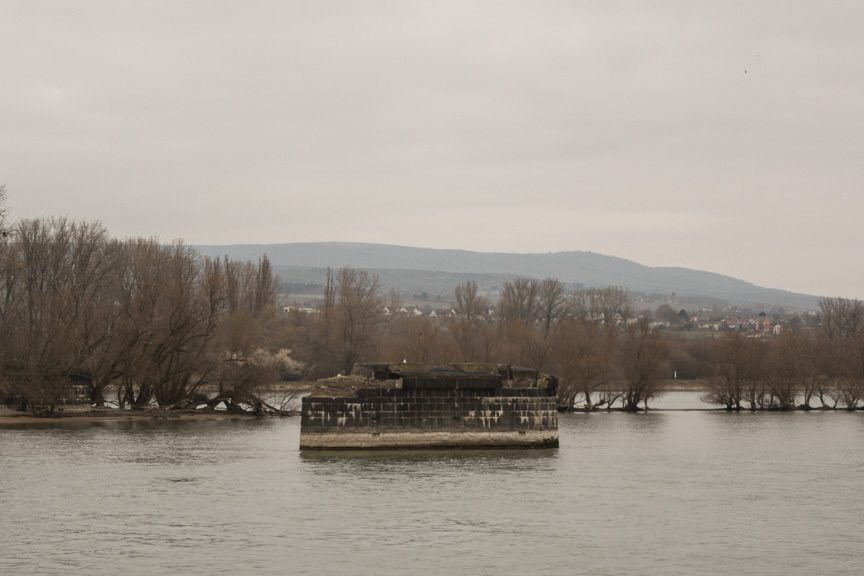 The only remains of the Hindenburg Bridge, bombed in 1945 and never rebuilt. Photo © 2016 Aaron Saunders