You are here: Home / Destinations / Russia / To Russia on the Ingvar: Viking River Cruises’ Waterways of the Tsars 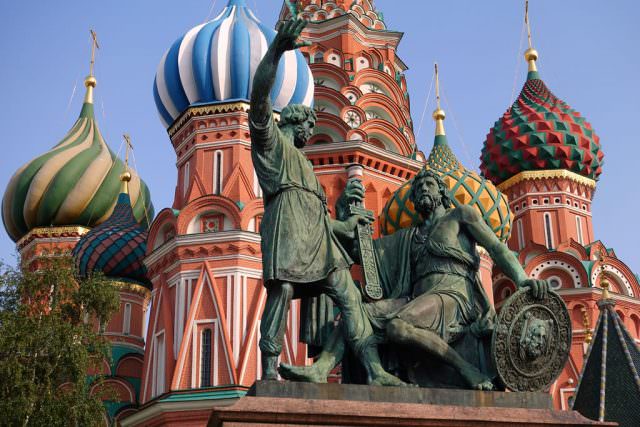 This past July, writer and photographer K.D. Leperi cruised Viking River Cruises’ Waterways of the Tsars. What follows are her impressions of Viking Ingvar, the vessel that transported her through Russia, and of the Viking experience in Russia. 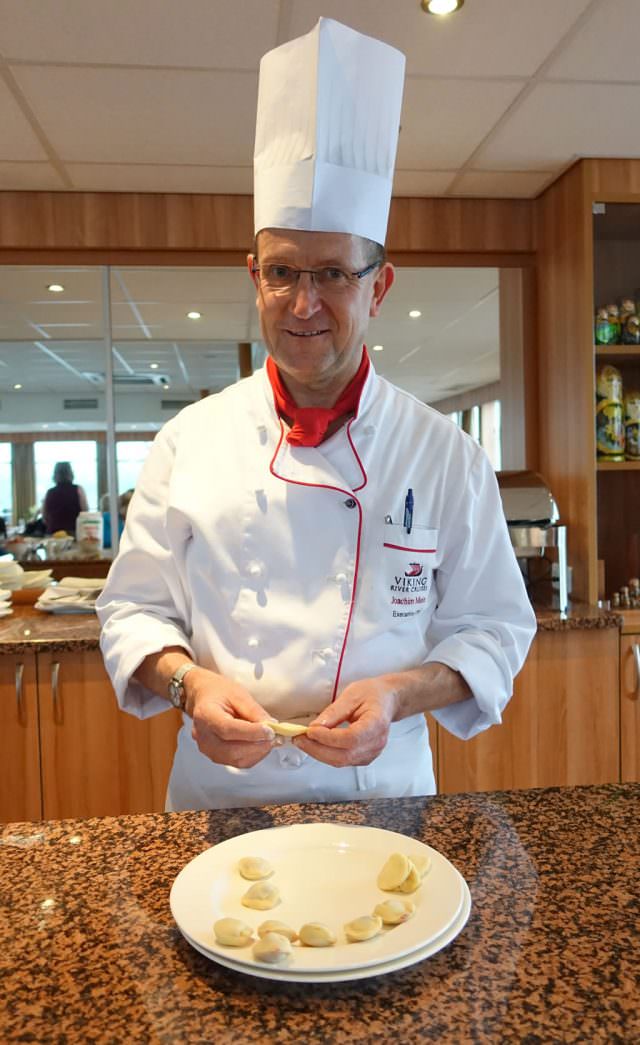 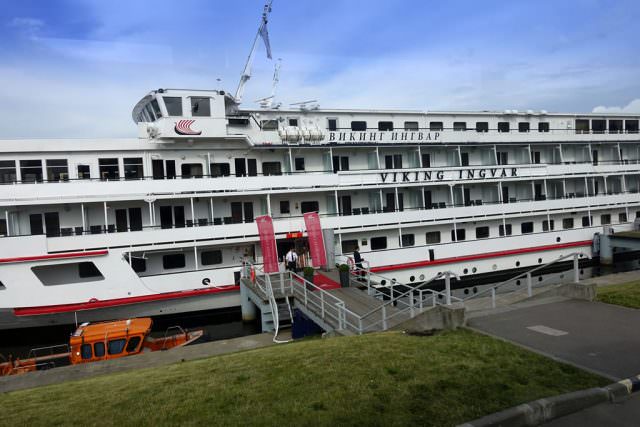 The Viking Ingvar sails the 13-night Waterways of Tsars itinerary with themed trips between St. Petersburg and Moscow. I was hosted on this itinerary, which takes guests from St. Petersburg to Moscow or vice versa. Port calls are customized to maximize the Russian cultural experience and include Yaroslavl, Uglich and Kizhi. Sumptuous palaces, bastioned monasteries, and cathedrals with a kaleidoscope of colors that mesmerize with their iconic onion domes.

The 423-foot-long Ingvar went through a complete dry-dock refurbishment in 2013/2014, rejoining the fleet in 2015 sporting a sleek, stylish European-look. 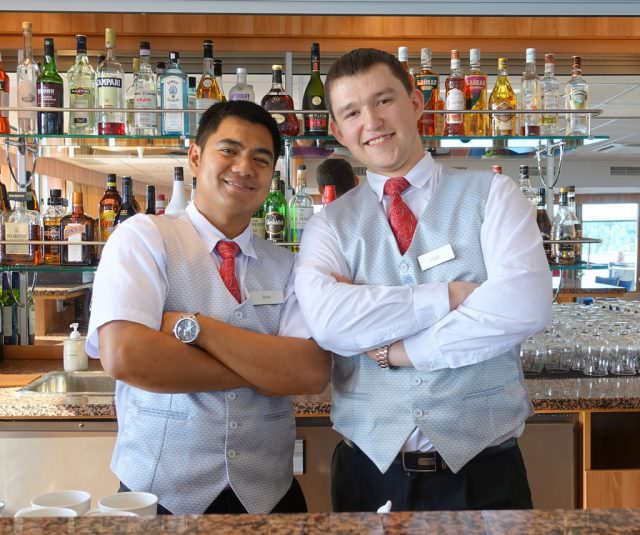 The Viking ship was named after Ingvar (875-945 AD), son of Rurik, the Viking chieftain who founded Rus. After his father died, he was raised by his uncle Helgi, eventually succeeding him to become ruler of the Rus empire.

All staterooms are outside with river views, air-conditioned, and come with a private, modern bathroom with separate shower and hair dryer. Bathrobes and slippers are available upon request. L’Occitane toiletries include shampoo, hair conditioner, shower gel, and body lotion. Laundry service is available for a fee.

Personal room amenities include bottled water replenished daily, a telephone for onboard communications, personal safe, mini-refrigerator, free Wi-Fi in rooms, and a Sony 26″ flat-panel TV with CNBC, CNN, BBC, and other English-language programming.

Staterooms are efficiently designed and include roomy wardrobes with wooden hangars, space under the bed for storing suitcases, and vanities that also serve as desks.

I stayed in a 225-square-foot Veranda stateroom (AX) with hotel-style beds in a twin-bed configuration to accommodate my guest and friend Renee. We particularly enjoyed the floor-to-ceiling sliding glass doors that opened onto our own private veranda. 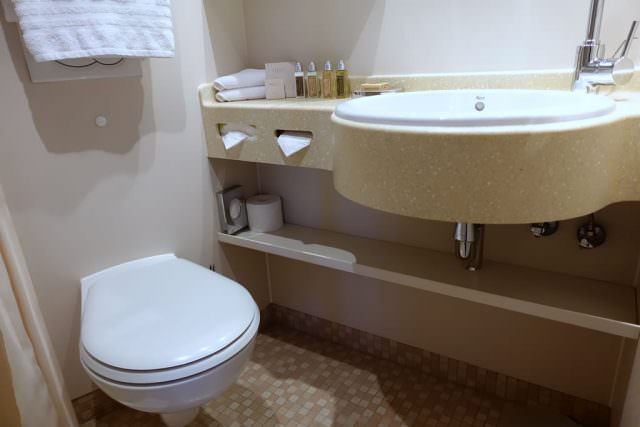 The food onboard the Ingvar includes staple choices for American-inclined palates as well as regional specialties that depict various ports-of-call.

Early-Bird breakfast is set up outside the lounge at 6 a.m., while full breakfast service begins from 7 a.m. to 9 am. in the Restaurant. The breakfast buffet includes scrambled eggs, bacon and sausage, with daily specials ranging from waffles, blintzes and pancakes to French toast. You can also choose from a selection of pastries, cereals, breakfast meats, fresh fruits and cheeses. A dedicated chef mans an omelet station so you can choose your ingredients while your breakfast is made-to-order. 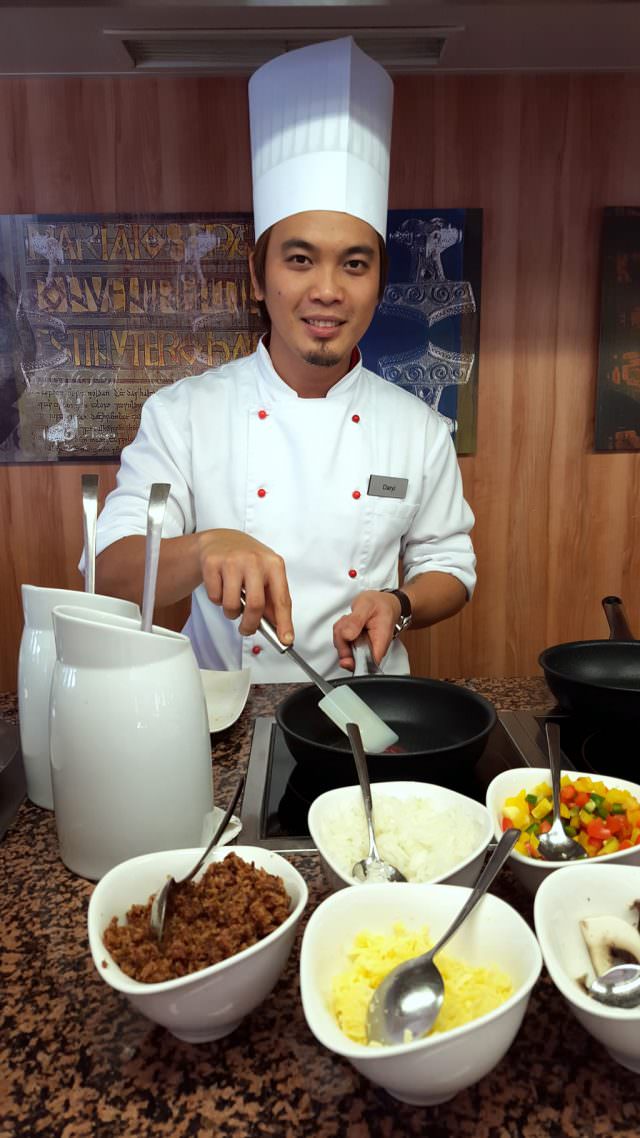 Lunch includes selection from a soup and sandwich bar or a choice of entrees and dessert. Five-course dinners include regional specialties and wines with open seating and a casual, relaxed dress code. 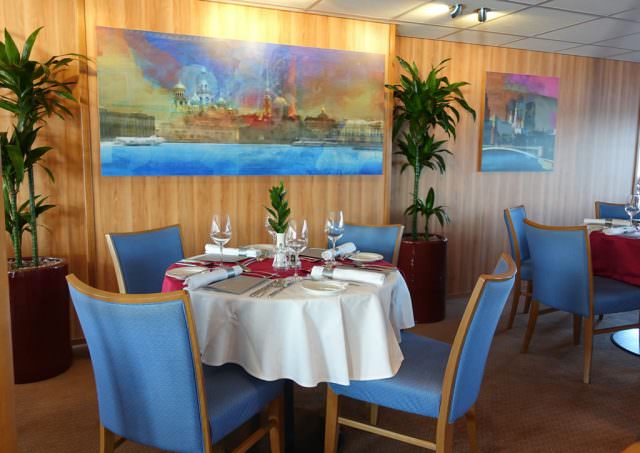 What I really liked was the integration of food, culinary specialties, Russian tea time and cooking demos with the local culture. Some of my favorite dishes included: pelmeni, borsche, vegetable goluptsi, sirniki and strudel. And a big plus was that there were vegetarian choices at every meal. 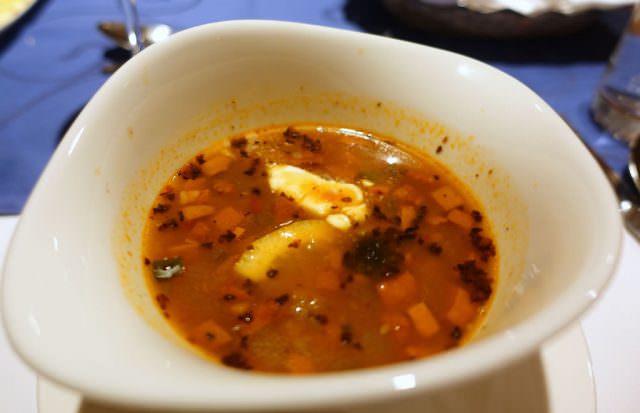 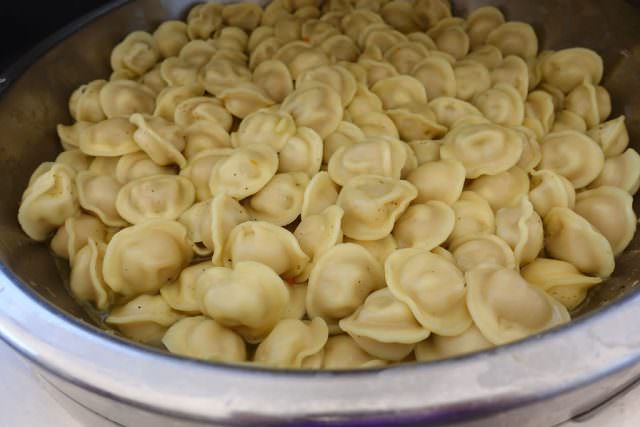 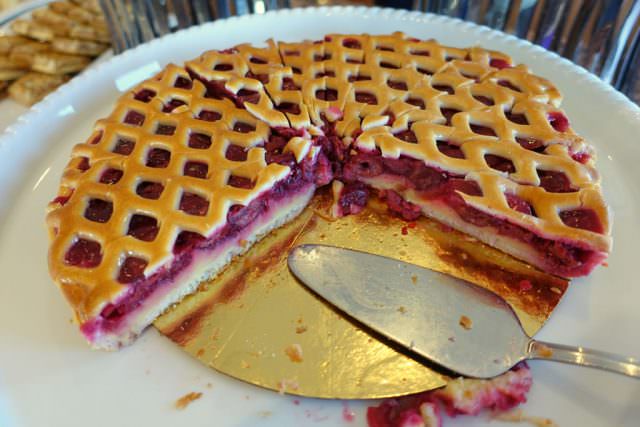 The itinerary – Waterways of the Tsars

Viking River Cruises’ Waterways of the Tsars glides along the Neva and Svir Rivers to Lake Onega (second largest lake in Europe) on to the Volga Baltic Waterway where it meets the mighty Volga (the longest river in Europe) and finally reaches the Moscow Canal. This is the trip that will let you experience the real Russia as you sail through small towns while you learn a little Russian, witness ballet and music performances, and hear about the Romanov Tsars, Soviet Union, and modern-day Russia.

Guests booking this itinerary receive personal tours of iconic museums like the Hermitage Museum, Catherine Palace, a UNESCO World Heritage site featuring some of the tallest wooden churches in the world, vodka and tea with locals in their homes, and an iconic tour of the Kremlin and Red Square with the world renown St. Basil’s cathedral. We rode the city’s Metro and even had a special concert presented exclusively for Viking guests in Moscow – definitely one of the highlights of the trip for me.

A huge part of Viking’s successful equation is largely due to the caliber of the ship’s crew and staff. They went out of their way to make our journey pleasurable, and it’s no wonder that Viking has received such a stellar reputation for their service. No rolled eyes or fake smiles either. From the Captain of the ship to the kitchen crew and housekeeping, everyone was genuinely interested in doing their best on the job, and evaluations at the end of the cruise give ample opportunities for everyone to learn and tweak the experience to be even better the next go-around. 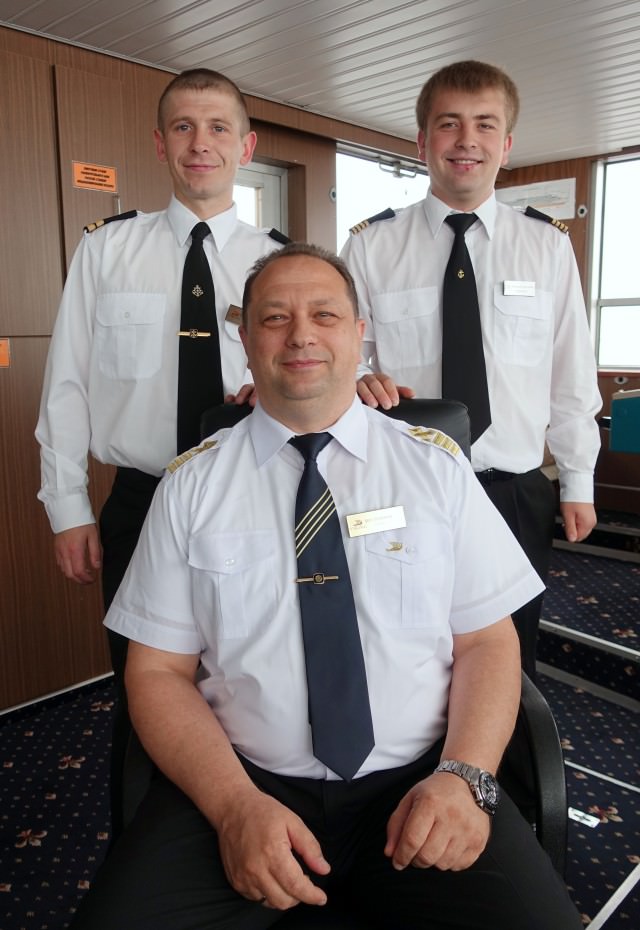 In particular, my cruise was more enjoyable because the Hotel Manager, Frank Bieschewski, made sure my delayed luggage reunited with me before our ship’s departure from St. Petersburg. His attentive and personalized attention were singularly responsible for the timely connection of my luggage, otherwise I would have been without a change of clothes until we reached Moscow, seven days later. A young Russian named Georgy from reception, accompanied us to the airport on his own time, our translator and facilitator with Russian ways. This young man is someone who will truly make a difference in the world. His kindness and insightfulness truly belie his youthfulness. 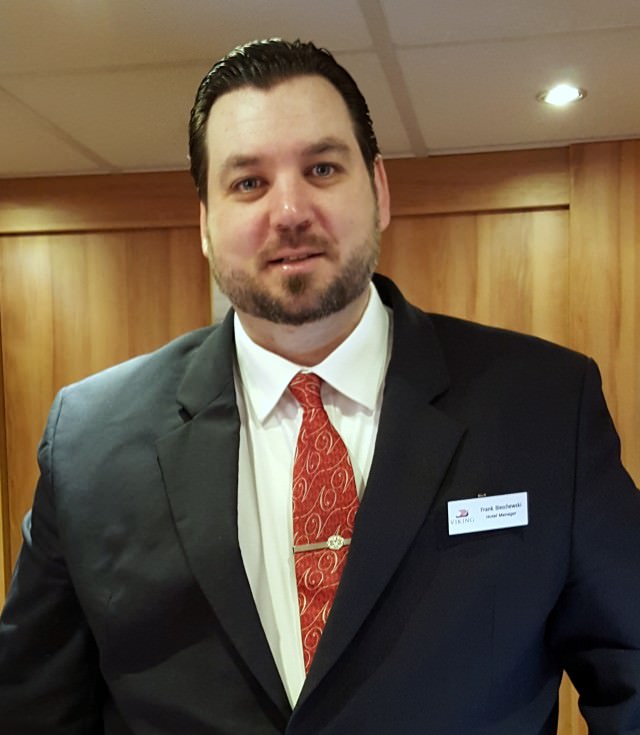 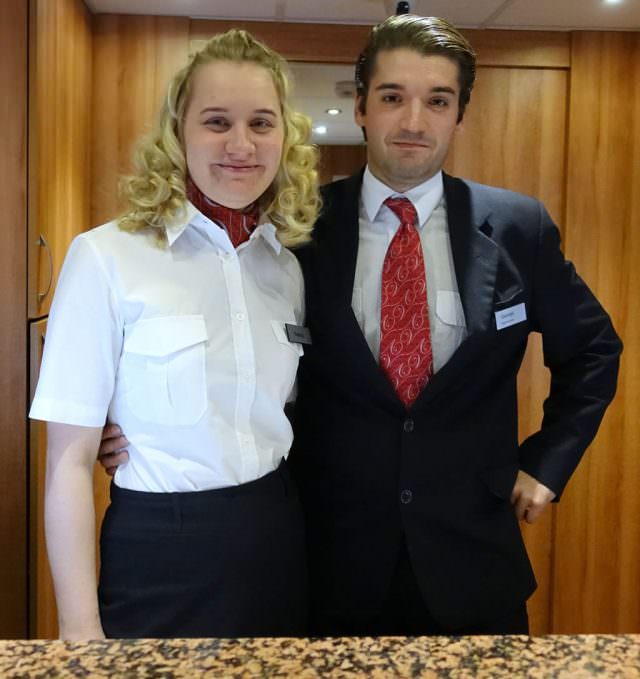 The Program Director Doug Jones is an American with the impossible task of coordinating all excursions and ship-board activities. His positive enthusiasm and professional demeanor always gave the confidence that things were under control, even if he had to resort to “plan B.” 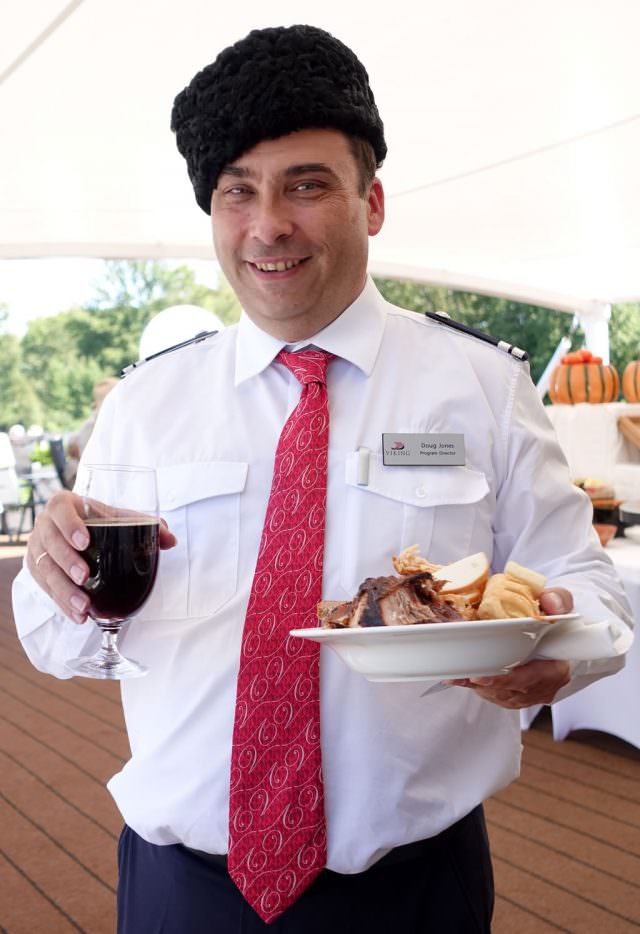 Chef Joachim Meier did a stellar job with the menu and was singularly responsible for an outstanding cooking lesson in the art of making Russian pelmeni. Jeremy (from the Philippines) waited on our table throughout the cruise and was always smiling and yet most professional and responsive in all his dealings. 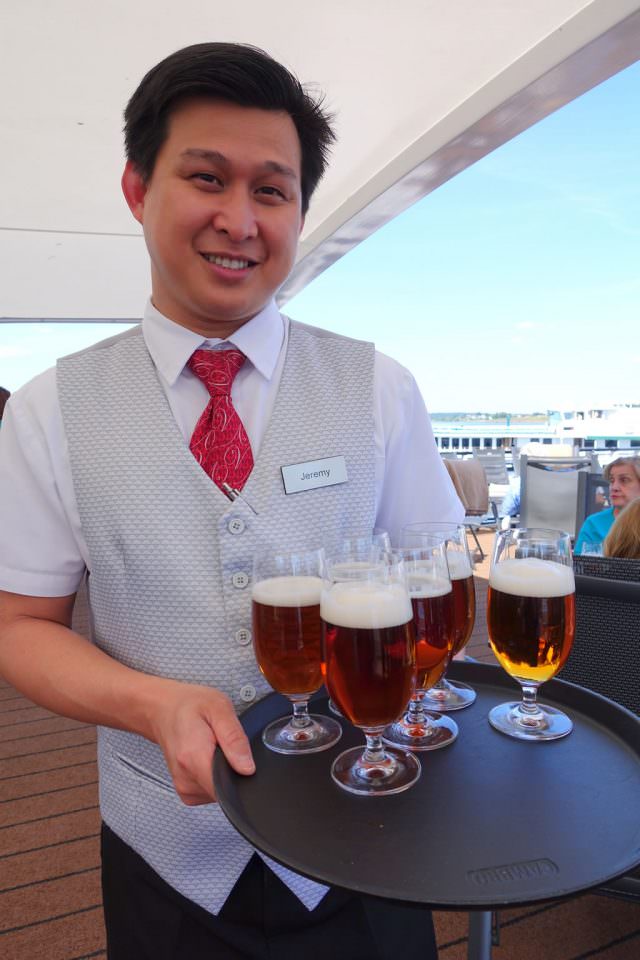 And ship-board guides Tatiana and Polina proffered instructional cultural talks that were collegiate and objective in their delivery. I learned so much in the process, though it totally turned my world topsy-turvy from previous Pentagon days when we viewed the Soviet regime through frozen ice. 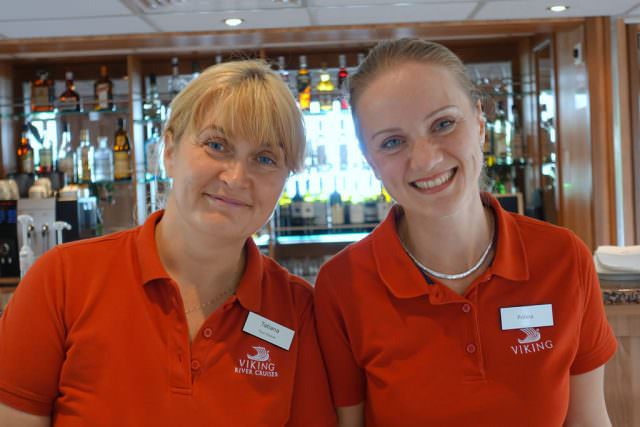 Included tours were the following:

Premium land excursions are extra and many times involve privileged access. For the small change involved, my recommendation is to take advantage of these tours as they are well-worth the extra charge and service. Some of the extra tours I took advantage of include: 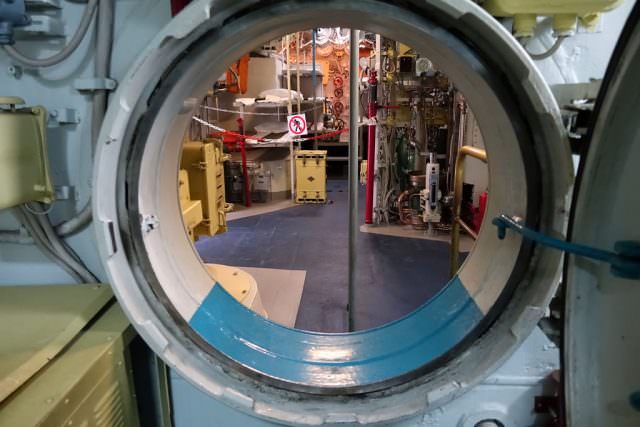 Inside a Russian Submarine – © K.D. Leperi

It can get rainy on this itinerary but don’t fret about packing an umbrella as the ship has loaners available on all land excursions.