The Magic of Myanmar 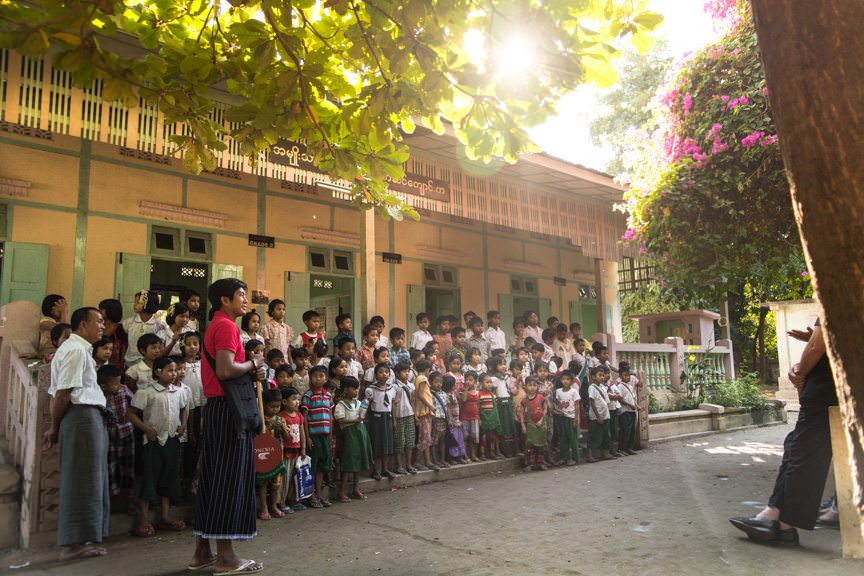 Today was the epitome of relaxation aboard Viking River Cruises’ Viking Mandalay, with a full half-day of scenic cruising along Myanmar’s Irrawaddy River as we made our way along to our afternoon port of call of Yandabo.

Curiously, the Irrawaddy is nothing like the Mekong River that runs between Cambodia and Vietnam. If you’ve done that river and think that Myanmar offers up more of the same, you’re mistaken. Not only do the cities and towns take on a completely different feel, but the two rivers themselves are also quite different. 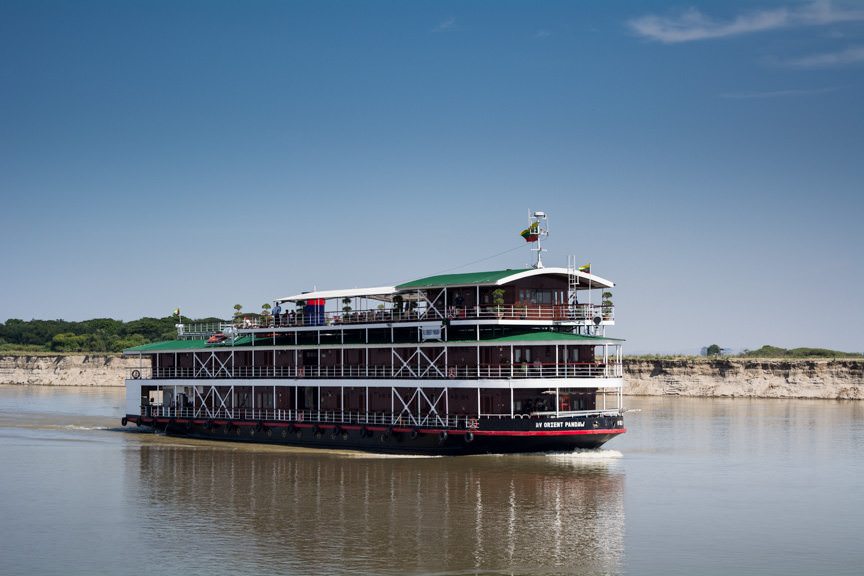 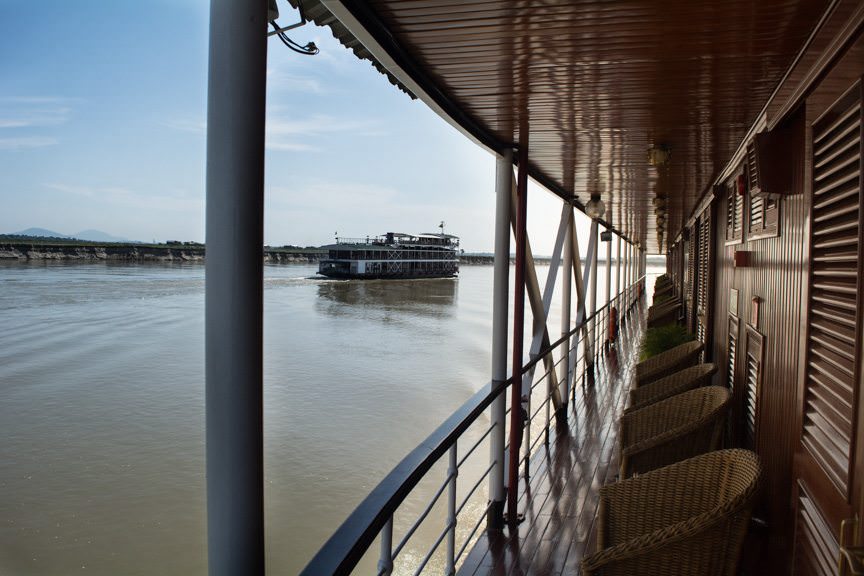 … on our morning of scenic cruising. Photo © 2015 Aaron Saunders

Where the Mekong is lush and lined with trees, mangroves and Wats, the Irrawaddy is barren and desert-like for the most part. In high water season, it apparently more closely resembles sailing on a lake. In low water, the ever-changing sand bars can unexpectedly scuttle planned sailings schedules. 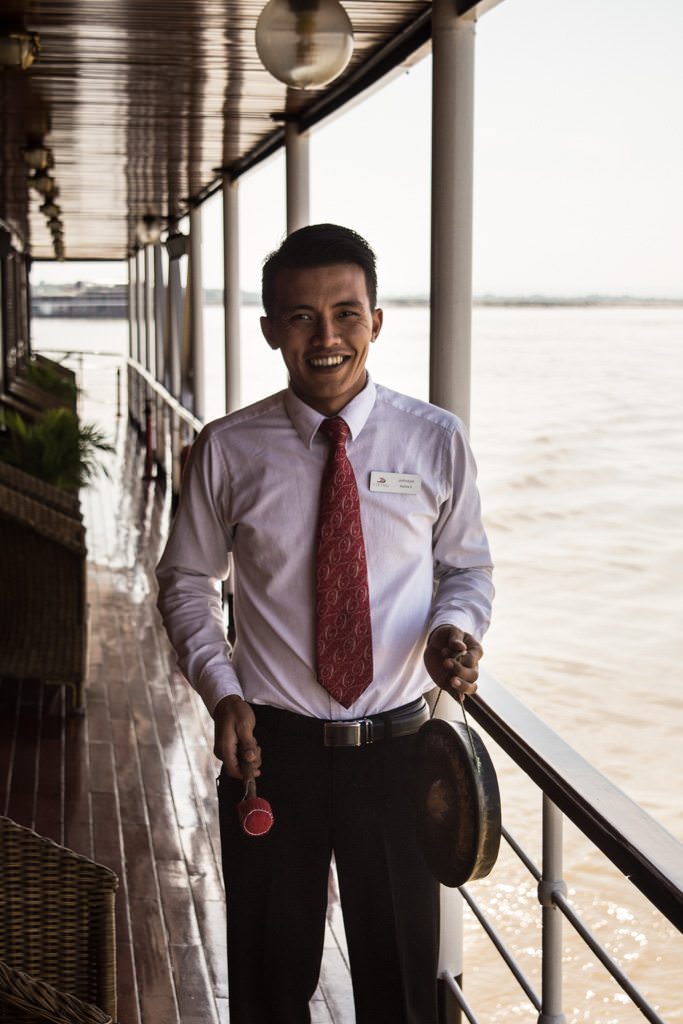 The Sound Of Food: Lunch and dinner are announced by ringing a gong on the ship’s outer decks. Photo © 2015 Aaron Saunders

The Irrawaddy may have the same brackish colour, but it has half the current that the Mekong does – though it still remains a powerful river. Downstream, our Viking Mandalay can make 10.5 knots across the water. Upstream, that number decreases to just 6.1 knots due to the fast-moving current. Still, we’re able to hold our position on the Irrawaddy with just one anchor during our mid-channel anchorages, compared with the two-anchor necessity of the Mekong. 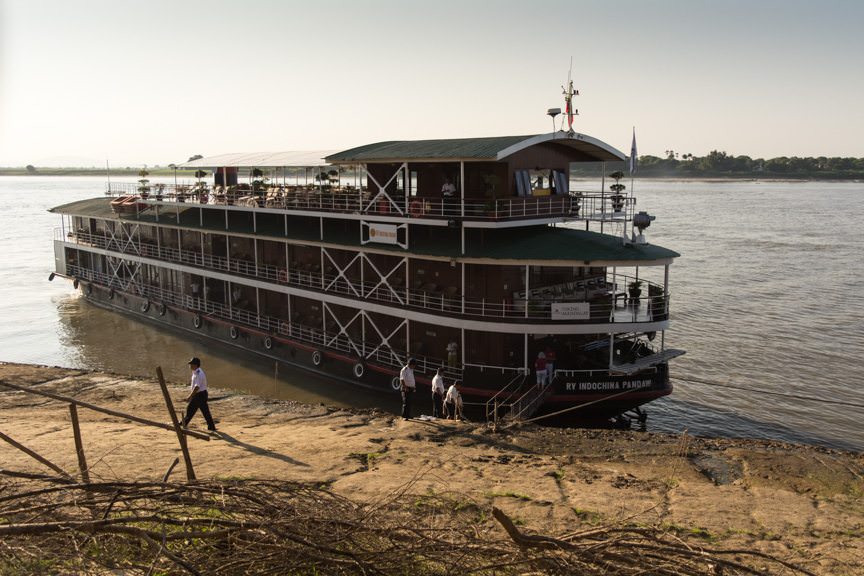 This afternoon, we arrived in the artisan town of Yandabo, which seems to exclusively manufacture pottery of all shapes and sizes. It’s not just a family affair; the entire village is involved in the pottery trade. What is surprising is how little these hand-crafted objects fetch; a beautifully, hand-crafted pot of a decent size may only net 17 cents at market, or perhaps two or three dollars if it ends up being shipped south to Yangon.

Like many of the townships we’ve visited on this Myanmar Explorer itinerary with Viking, you’re unlikely to find Yandabo in your guidebook. What you need to know is this: It’s a beautiful little village that has a school that Viking helps to financially support. 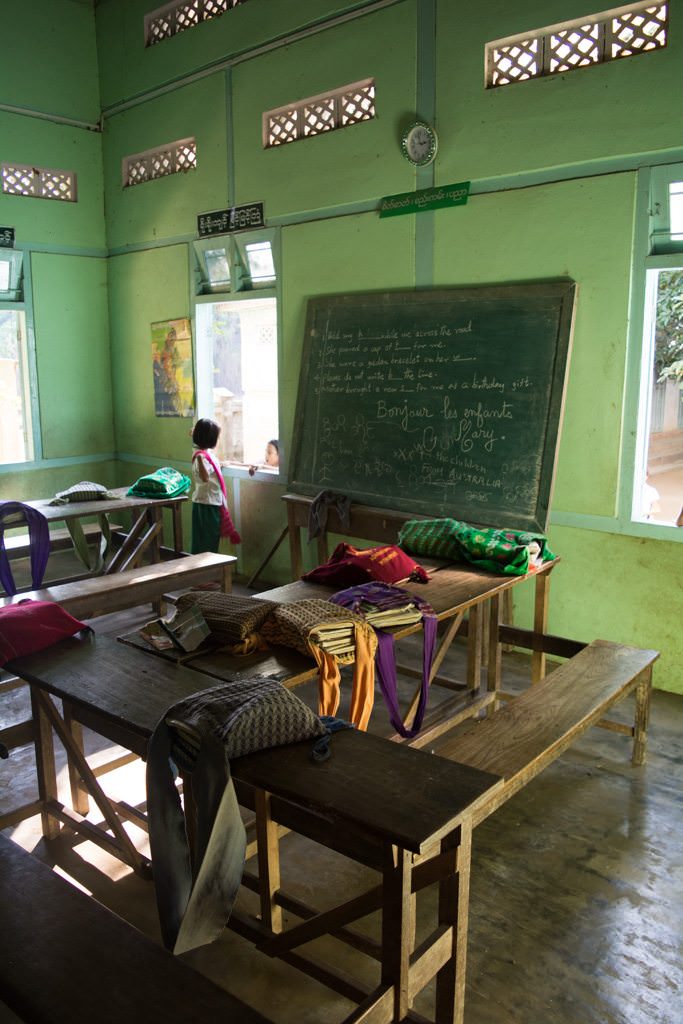 On-tour this afternoon at the local school in Yandabo that Viking helps to financially support. Photo © 2015 Aaron Saunders

We toured the school, where the local schoolkids were all too happy to practice their English with us. A few hid shyly behind columns or entryways, and I can’t say I blame them. With our funny hats, oversized shoes, moisture-wicking shirts and breathable cargo pants, we probably look very alien to them. But they’re used to seeing foreigners here, and by and large they were all excited beyond belief to see us. 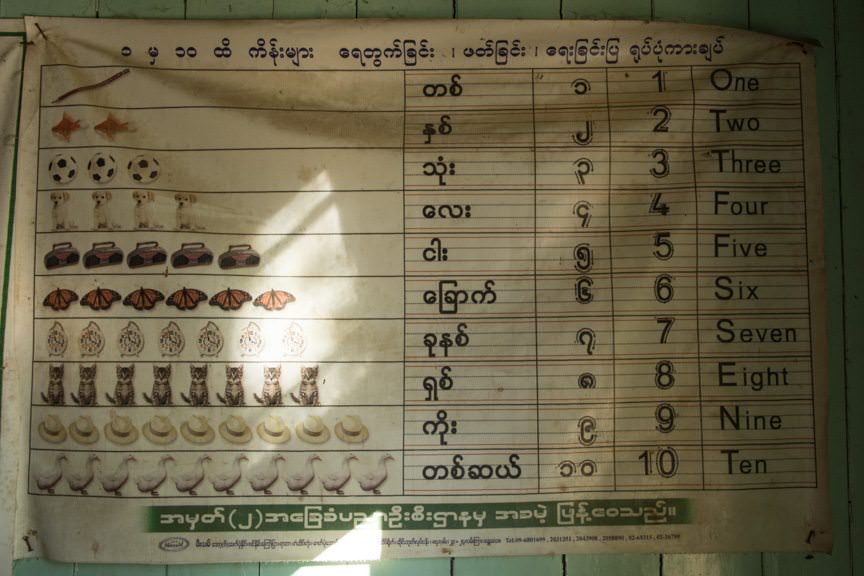 I had mixed an electrolyte package into my bottle of water, which turned it a lime green colour. This, apparently, turned me into an object of fascination for the kids. Many asked for my water bottle but I declined, as frankly I needed it to not faint in the sun! But I mainly didn’t give it to them because I wouldn’t want it to upset their stomachs since I’d already drank from it.

This evening was Burmese Night onboard the Viking Mandalay. Guests were encouraged to wear their traditional Longyi, a sarong-like garment worn by both men and women instead of pants. Longyi’s for men tend to have thatched patterns on them similar to a Sottish kilt, while women’s Longyi can be beautifully decorated like a dress, with elaborate stitching, colours and designs. 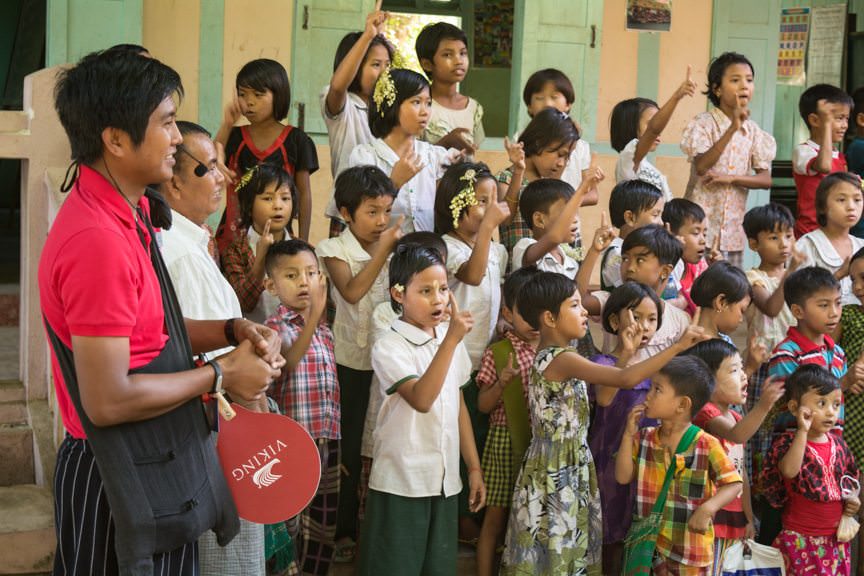 The local schookids sing for us. Photo © 2015 Aaron Saunders

So, clad in my sandals and my Longyi, I made my way up to the Sun Deck. My friends know I never wear sandals, and I rarely walk around in a sarong (incredible, I know), so the look was a new one for me. I was happy, however, to find that each and every guest onboard embraced the Longyi throughout our Burmese cocktail, our Burmese dinner, and our Burmese dance lessons after dinner up on the sun deck.

At one point, our crew gathered us in a Burmese-style conga line, and each and every one of us began to dance and parade around the sun deck. It was dark out, and we had anchored seemingly in the middle of nowhere. There was darkness without light, except for the Viking Myanmar, which was brightly lit. To see her from above would be to look down on a ship full of laughter and merriment; a glistening spec of light in the middle of the blackness of the Irrawaddy. 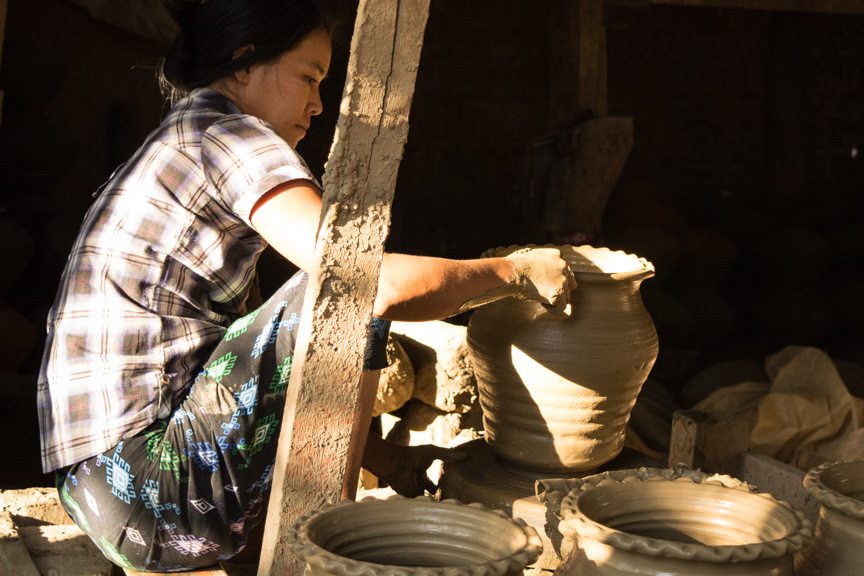 The village of Yandabo makes pottery, and we learned about its production today. Photo © 2015 Aaron Saunders 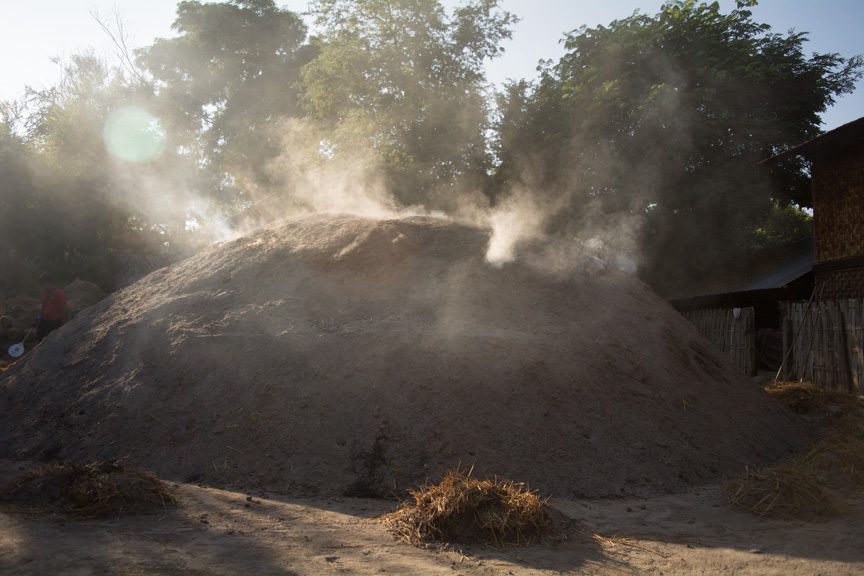 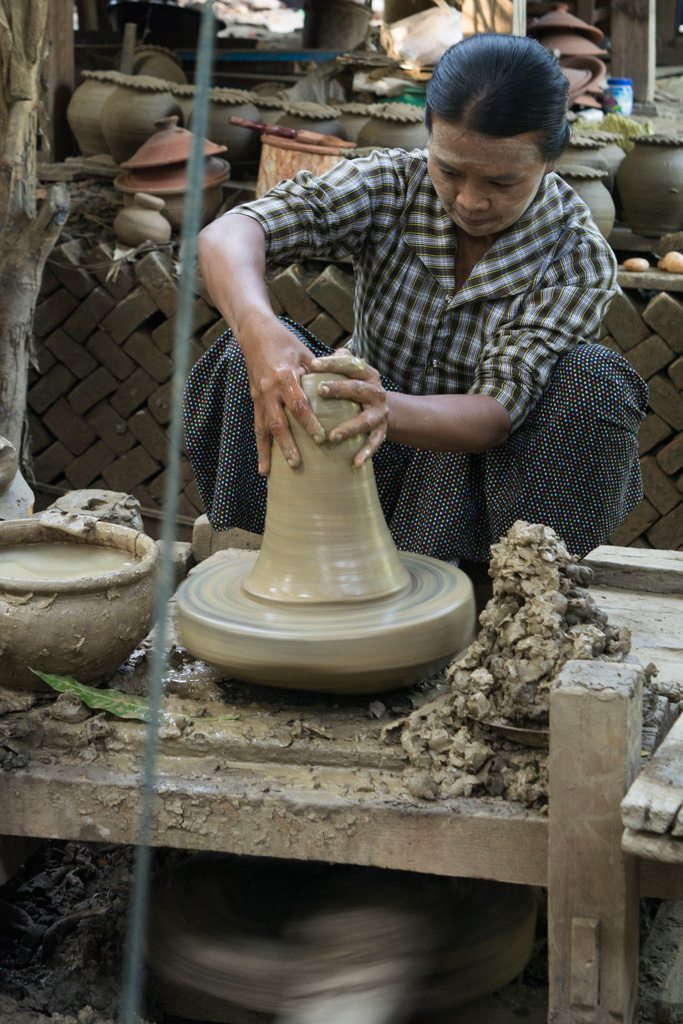 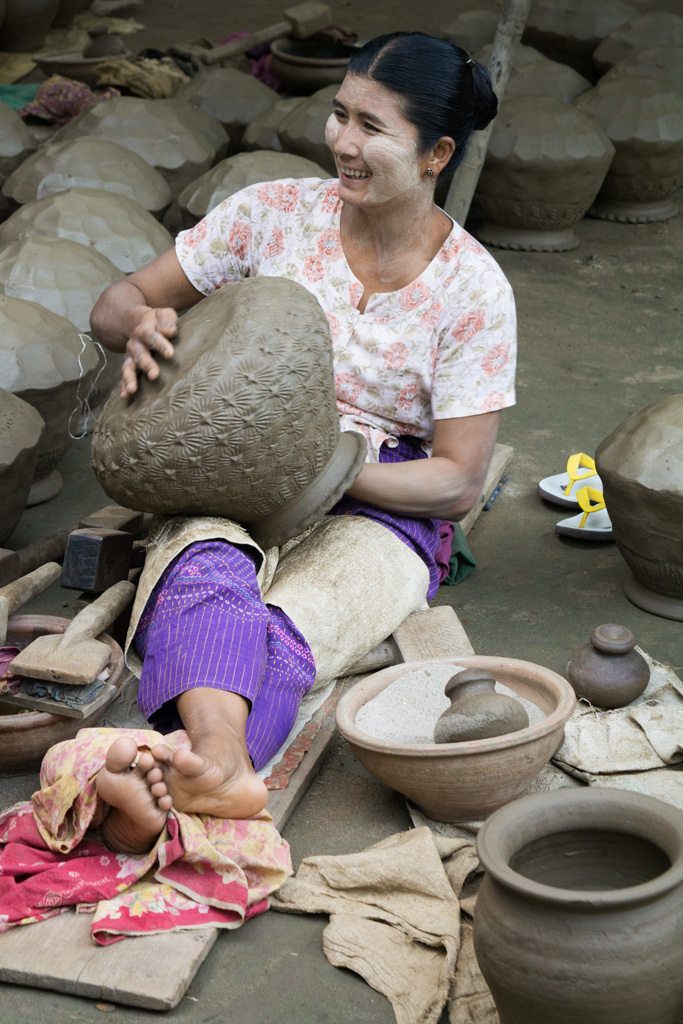 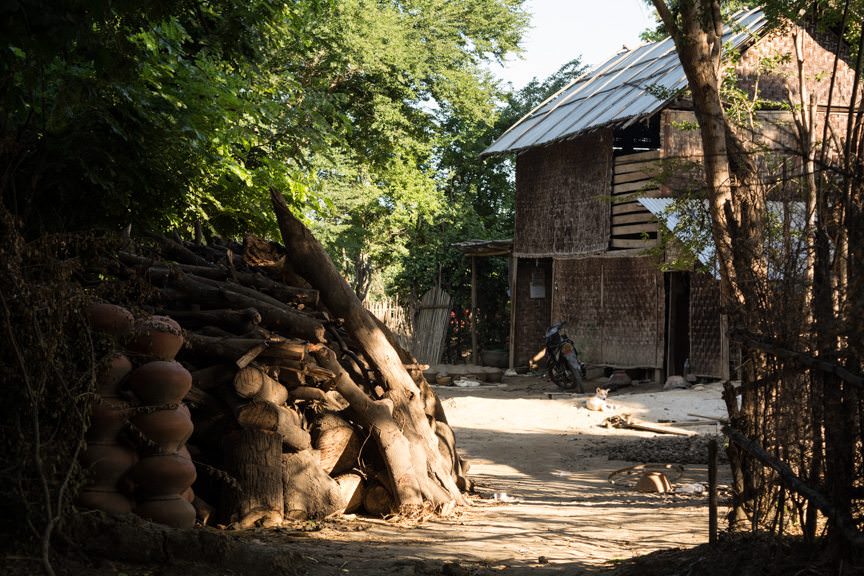 One last look at the village of Yandabo. Photo © 2015 Aaron Saunders

Those are the moments that are few and far between on some holidays, which is why I always tell people this: You can take a vacation, or you can have an experience.

This is the latter – and a wonderful one at that. 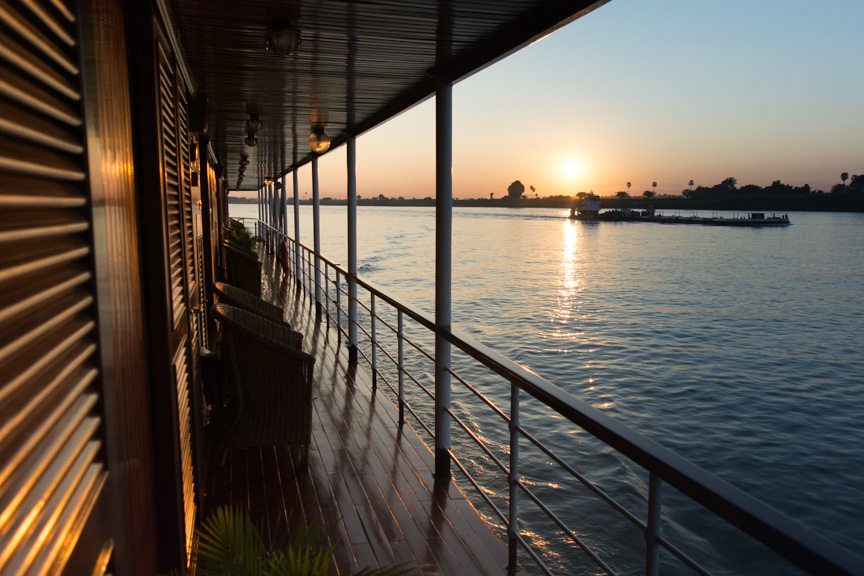 Our Live Voyage Report from Viking River Cruises’ Myanmar Explorer continues tomorrow with one last day in Myanmar aboard the Viking Mandalay! Be sure to follow along with our adventures on Twitter @deckchairblog.