Mandalay, Amarapura, and the U-Bein Bridge

This morning, I awoke aboard Viking River Cruises’ Viking Mandalay after a fantastically comfortable sleep. Despite the fact that the townspeople of Amarapura insisted on blaring music at all hours of the night as part of their Tazaungdaing Festival, or what I’ll just call the Full Moon Festival for the sake of clarity. This occurs in November to celebrate the end of the rainy season, and we just happen to be here at the climax of the ceremony. 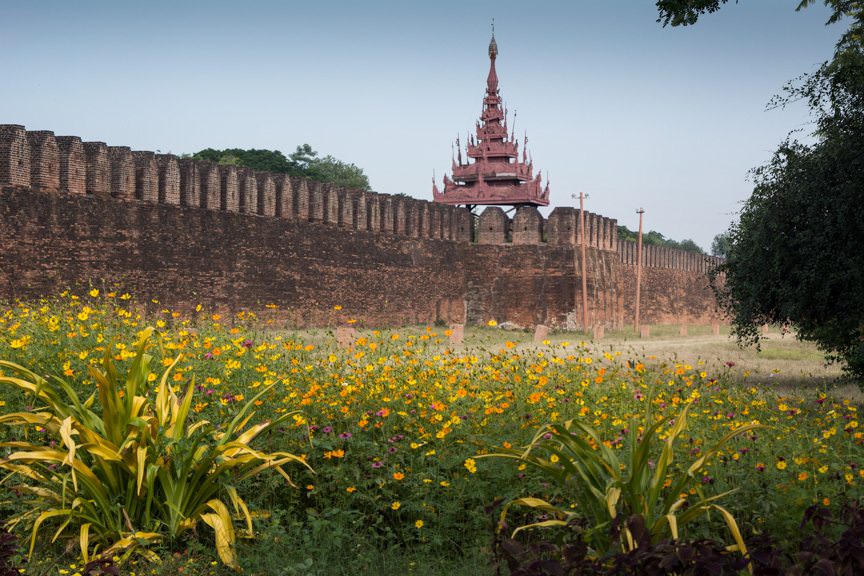 Our day of exploration in Mandalay, Myanmar with Viking River Cruises began with a tour of the (heavily reconstructed) Mandalay Palace. Photo © 2015 Aaron Saunders

The great news is that the rooms are beautifully soundproofed, and you can choose how you’d like to sleep: a set of slatted sliding doors gives way to a second set of glass sliding doors. For maximum effect, close both doors to keep the heat and the sounds out. But, if you’d prefer to sleep with natural fresh air, you can keep the glass doors open and just close the double sliding slatted doors, as they have mesh netting that should keep out most* of the bugs.

*Most. Bugs here – particularly the mosquitoes – have a funny way of getting in through even the tiniest cracks. Bring lots of strong insect repellent, and even then, be prepared to get bit a few times.

Mainly destroyed during World War II, much of Mandalay Palace has been rebuilt during the 1990’s. Still, it makes for an impressive sight. Photo © 2015 Aaron Saunders

Which brings me to Malaria: The risk of Malaria – at least where Viking goes – is very slim. You don’t have to take antimalarials for this journey, though you can if you feel safer doing so. The mosquitoes here are resistant to Malarone, which was my antimalarial of choice in South Africa three years ago. Plus, you’ve got to worry about Dengue Fever, which has no antidote or cure, as well as a host of other infectious diseases transmitted by mosquitoes. The best solution: Cover up as much as possible, and wear lots of bug spray.

Forgot to bring your bug spray, or just left it in your stateroom? No worries: Viking keeps three kinds of bug sprays outside the Reception Desk on Upper Deck for you to spritz liberally on as you stroll by. 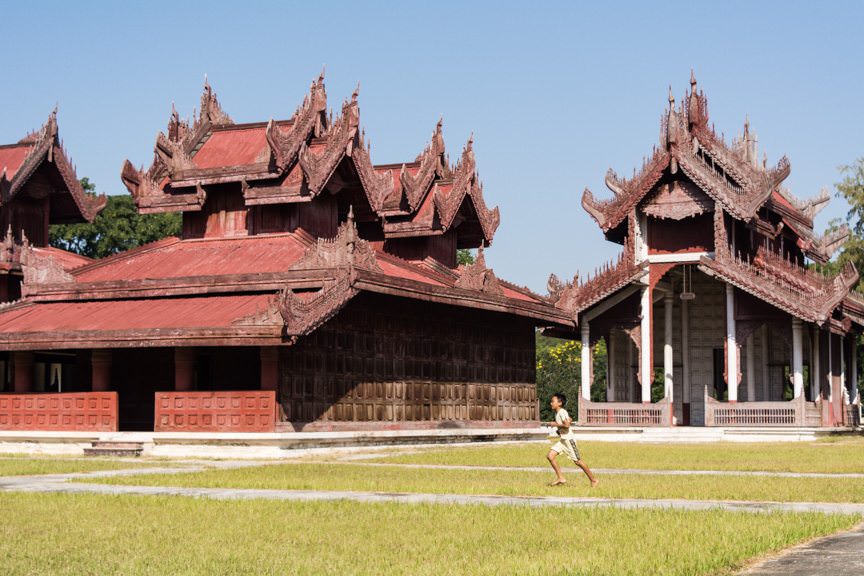 With that cleared up, today brought with it a full day of exploration in Mandalay and nearby Amarapura. In fact, our touring began early this morning and lasted until well after sunset, arriving back at the Viking Mandalay just after six in the evening.

Because of the Full Moon festival, traffic was a vicious mish-mash of cars, motorbikes, and impossibly overloaded one-ton trucks and vans that carried seemingly entire villages within their steel-cage confines. Pedestrians crowded the dusty streets, again collecting cash offerings for Buddha.

That might seem foreign to you – and that’s entire reasonable. But what I really love about Myanmar is how kind, sincere and wonderful the local people appear to be. They also seem to have a genuine love for Buddhism and a passionate love for their country that is infectious. And I have enjoyed every second of being here. My senses may be assaulted with new and extraordinary sights and sounds, but being here today seems to be to be a real privilege. 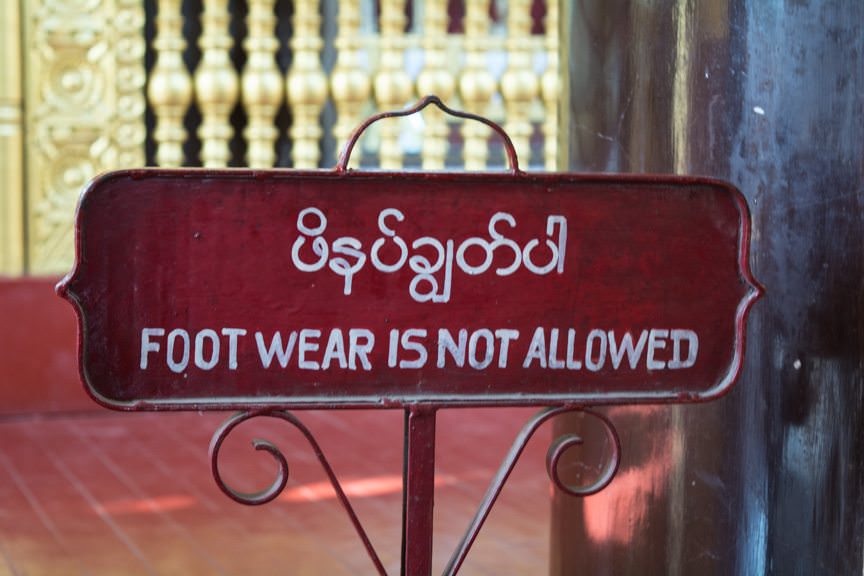 Our first stop – once our coach had fought its way through the melee of people – was the Mandalay Palace. First constructed in 1857 by King Mindon, it was styled similarly to China’s Forbidden City. But the palace was disused by the time the British appeared on the scene, and Allied bombing campaigns during World War II flattened the complex. Today, it is still a working palace, but the buildings have all been recreated in the 1990s.

Myanmar’s military presence is on display at the Palace. We were warned to never photograph the military guards, who patrol in front of the East Gate in their olive-green uniforms. It is the only entrance open to foreigners, and is adorned with the propagandist slogan, “Tatmandaw and the people cooperate and crush all those harming the union.” Still, the armed military guards made a point of waving to all of us as our coach drove past, so it’s not as if the military is unfriendly to foreigners. 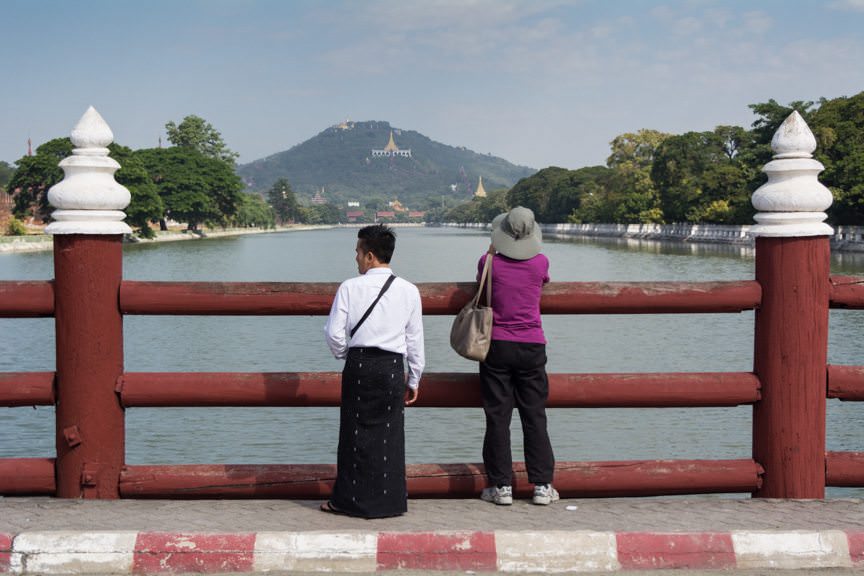 Despite this site being largely recreated (tourists are heavily restricted to a few select areas of the present-day Palace), it still gives a good overview as to how historic Mandalay would have looked at the time of Rudyard Kipling – if he had been here. You see, the famous author and poet never actually visited Mandalay, despite having penned a poem about it.

We also visited the UNESCO World Heritage Site of Kuthodaw Palace, which contains the largest book in the world. This is created from 729 temples that house stone scriptures of the teachings of Buddha. That King Mindon was a busy guy; in addition to Mandalay Palace, he also commissioned Kuthodaw. UNESCO officially recognized the site for its cultural and historic value in 2013; a further indication of Myanmar’s newfound openness to the outside world. 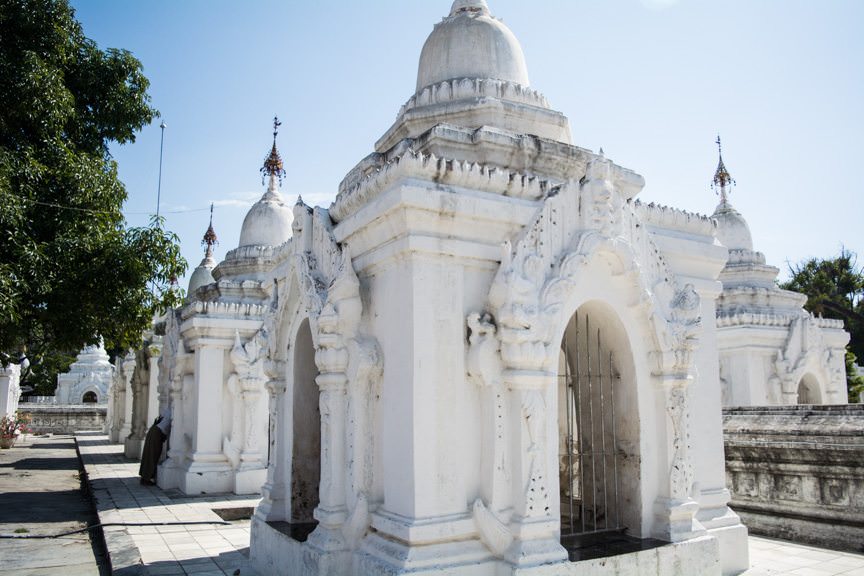 A UNESCO World Heritage Site, Kuthodaw Palace is a must-see on any visit to Mandalay. Photo © 2015 Aaron Saunders 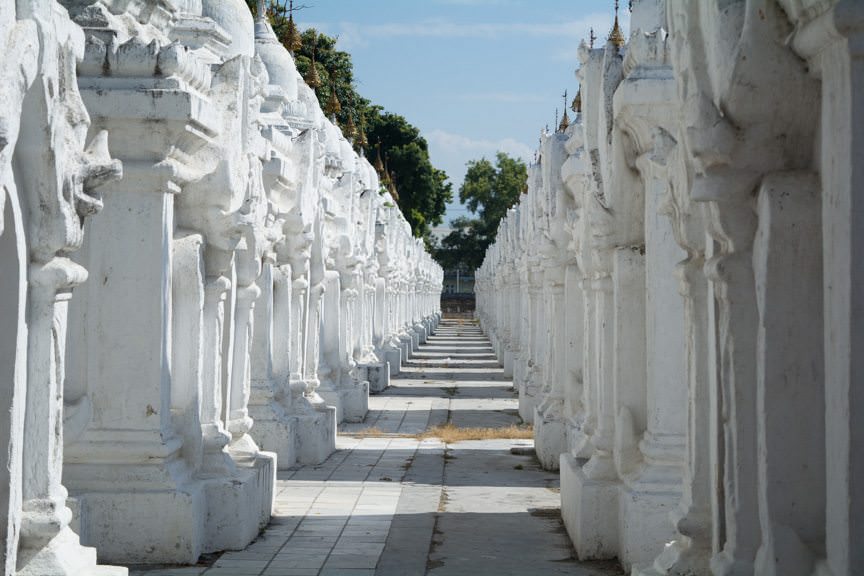 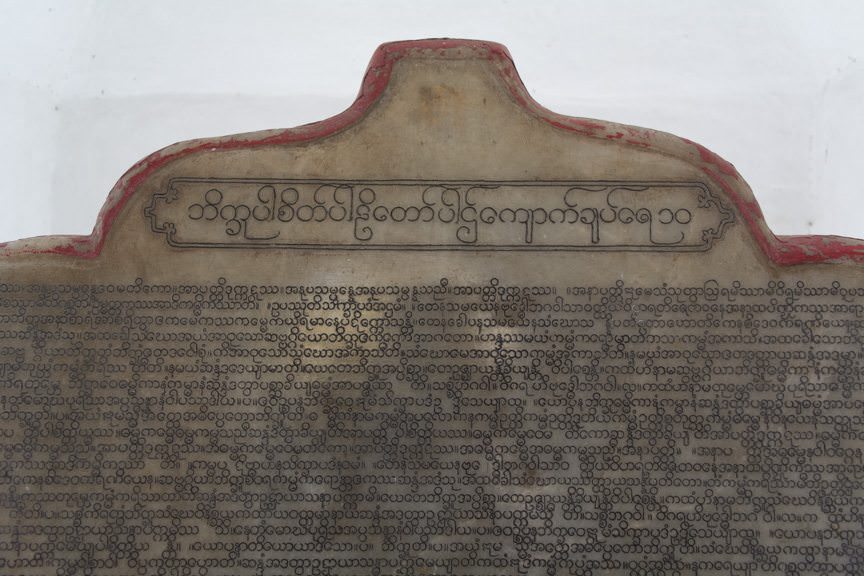 After a local lunch, we also visited a local Buddhist monastery to learn about the Buddhist way of life. To simply be able to walk around the complex, located in nearby Amarapura, was a real treat, but the highlight was being able to speak with a young Buddhist monk, with Viking Program Director Andrew acting as our personal interpreter. 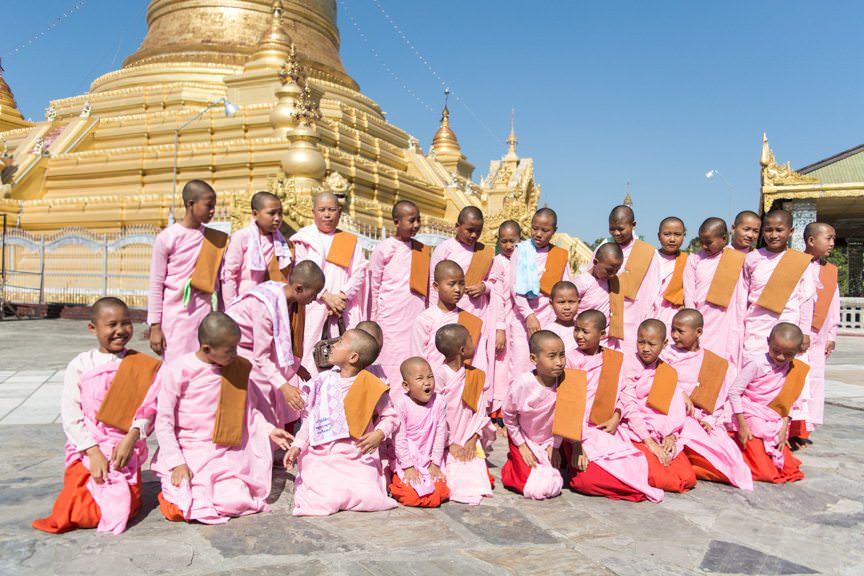 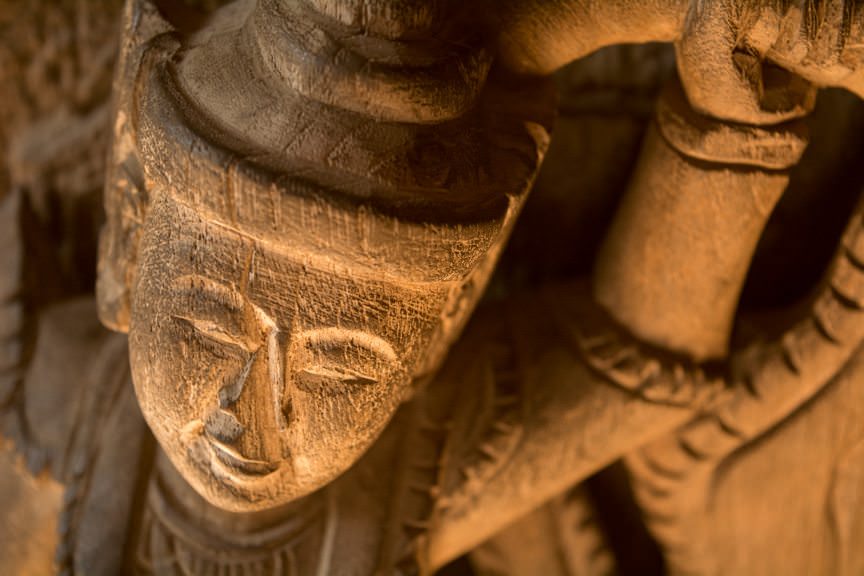 … on this spectacular day of discovery. Photo © 2015 Aaron Saunders 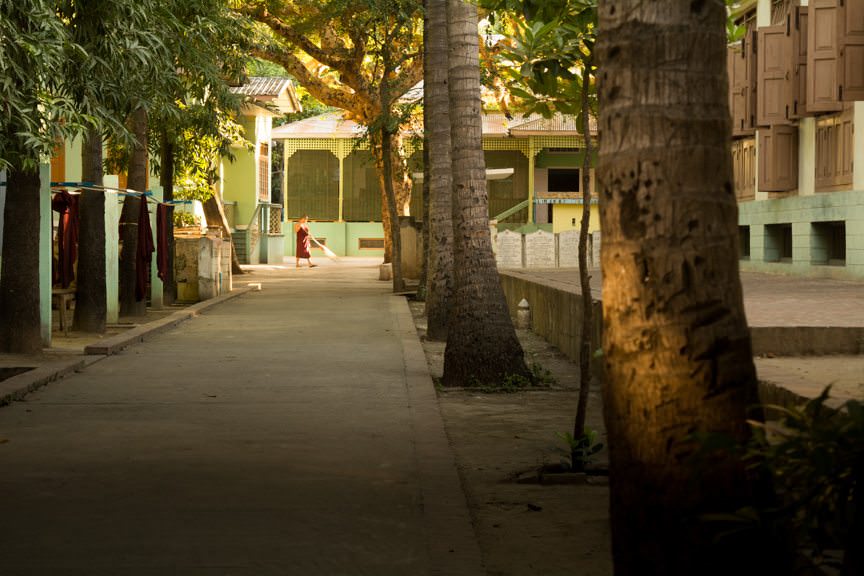 This afternoon, we visited a Buddhist monastery … Photo © 2015 Aaron Saunders 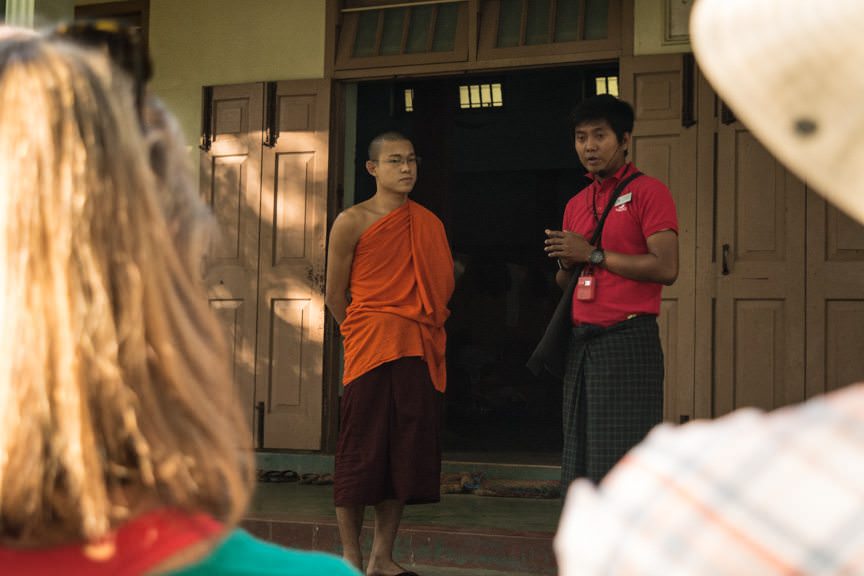 … where a local monk answered our questions. Photo © 2015 Aaron Saunders

The absolute pinnacle of our day, however, was our sunset river cruise by boat along the U Bein Bridge.

The longest teak bridge in the world, U Bein was created after the historic capital of Myanmar was shifted from Amarapura to Mandalay in 1859. With the need for a link between Amarapura and Mandalay, the bridge – with more than 1,000 support pillars end to end – spans Lake Taungthaman and reportedly takes more than 20 minutes to walk across. 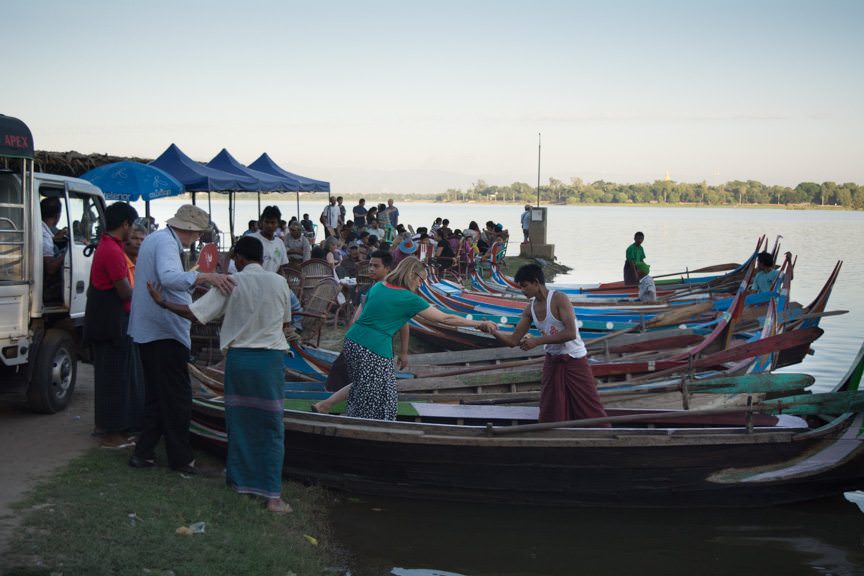 Boarding our boats for our evening cruise … Photo © 2015 Aaron Saunders 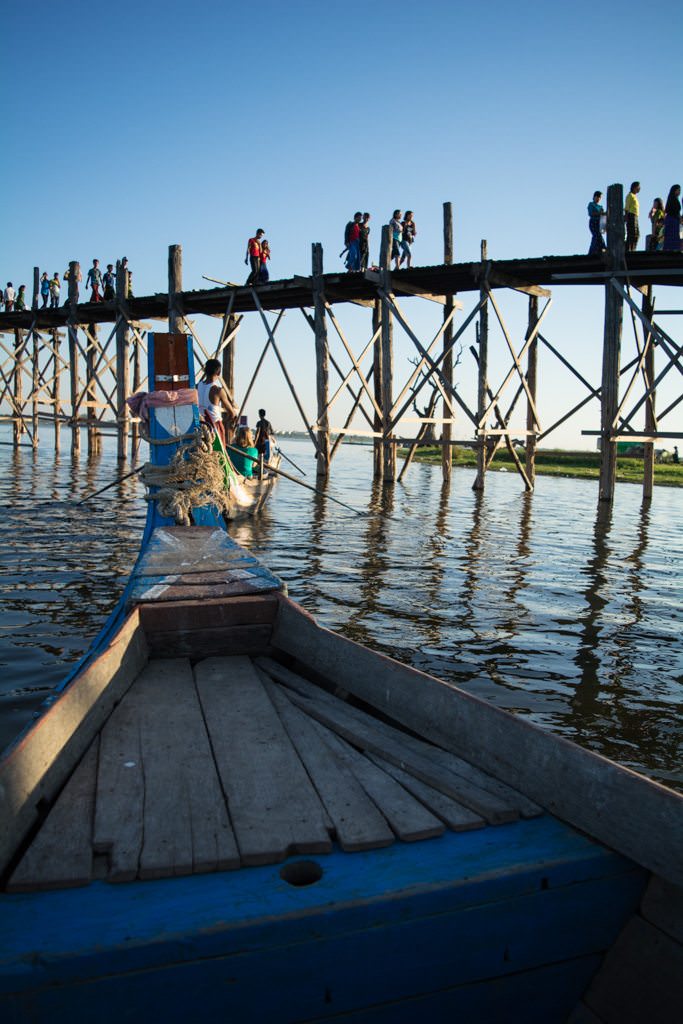 We wouldn’t be doing that. Instead, we’d be admiring the bridge – at sunset – from a small flotilla of two-person boats manned by locals while sipping champagne from glasses provided by the bar staff from Viking Mandalay.

To see the bridge at any time is breathtaking, and to sail underneath it, criss-crossing Lake Taungthaman is a special thing. To sit there in the evening, drinking champagne, while the last embers of the day slip beneath the bridge’s teak deck and pilings, is nothing short of moving. 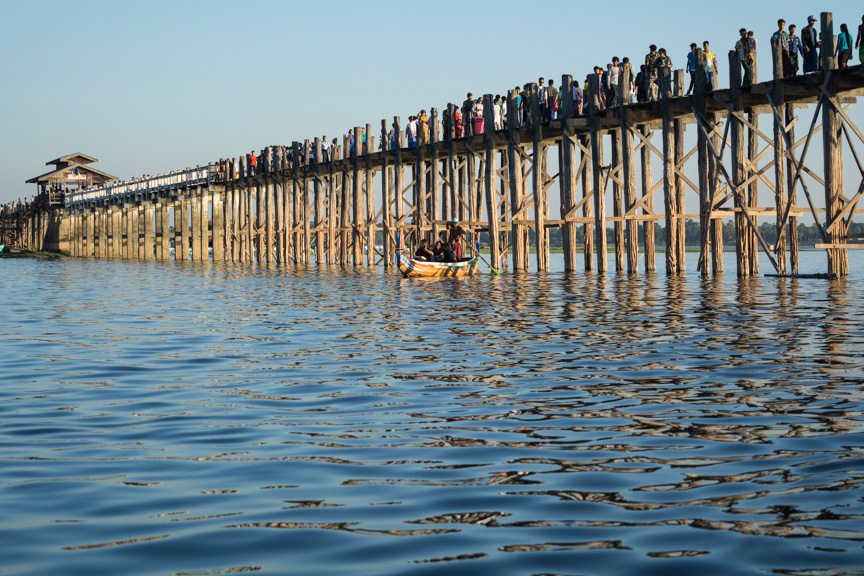 The U Bein Bridge is the longest teak bridge in the world. Photo © 2015 Aaron Saunders 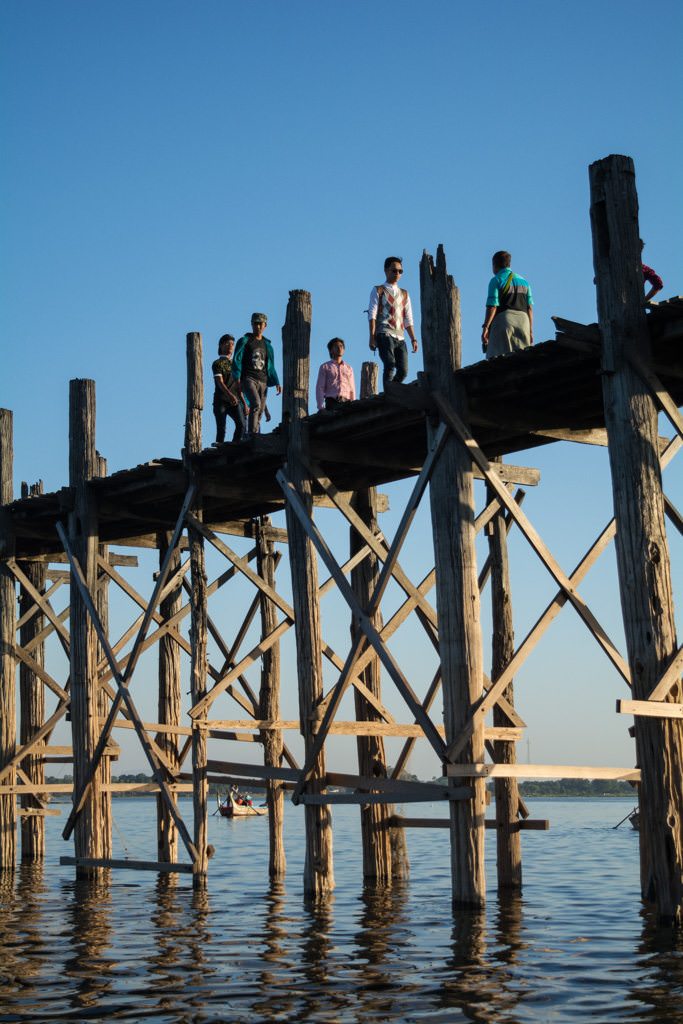 It also happens to be one of the most picturesque. Photo © 2015 Aaron Saunders 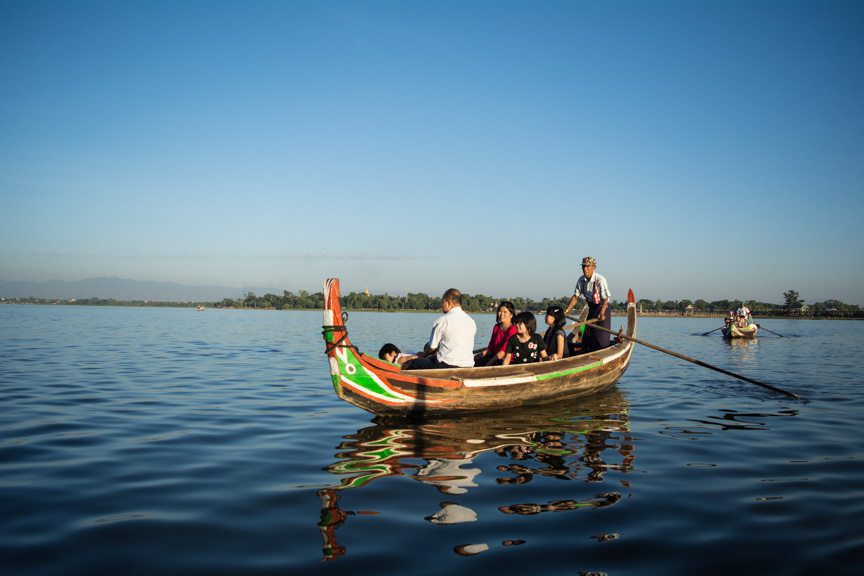 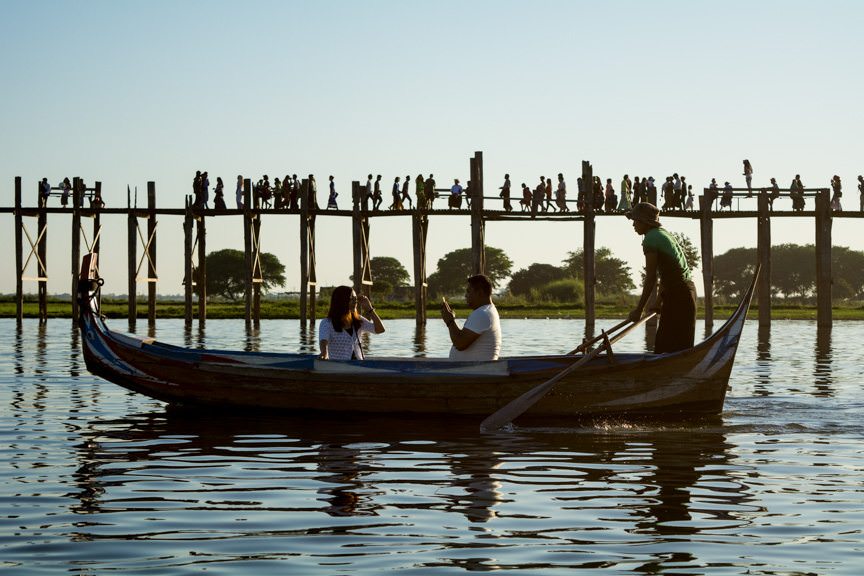 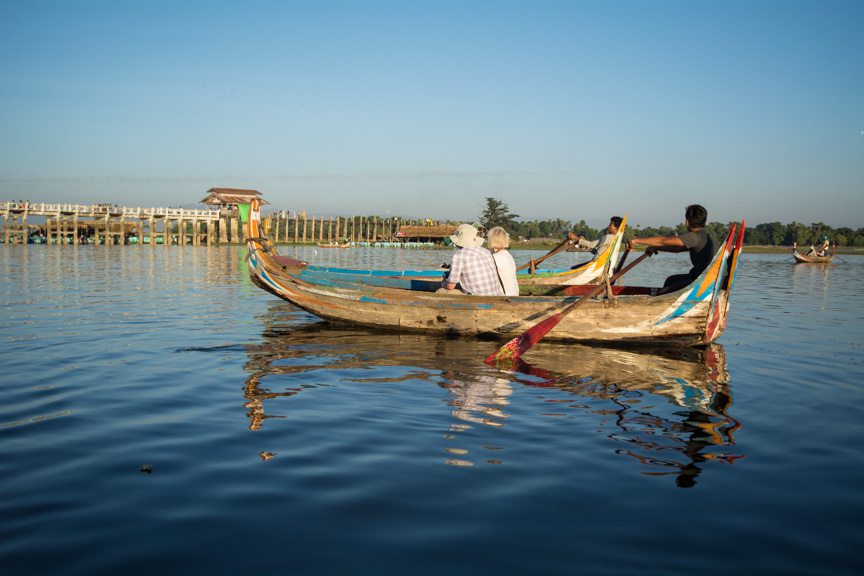 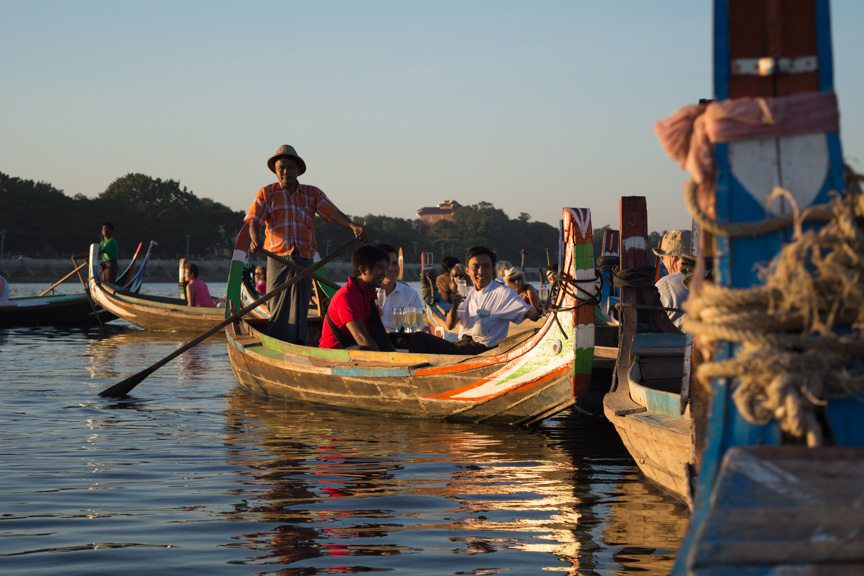 As we waited for sunset, a surprise! Photo © 2015 Aaron Saunders 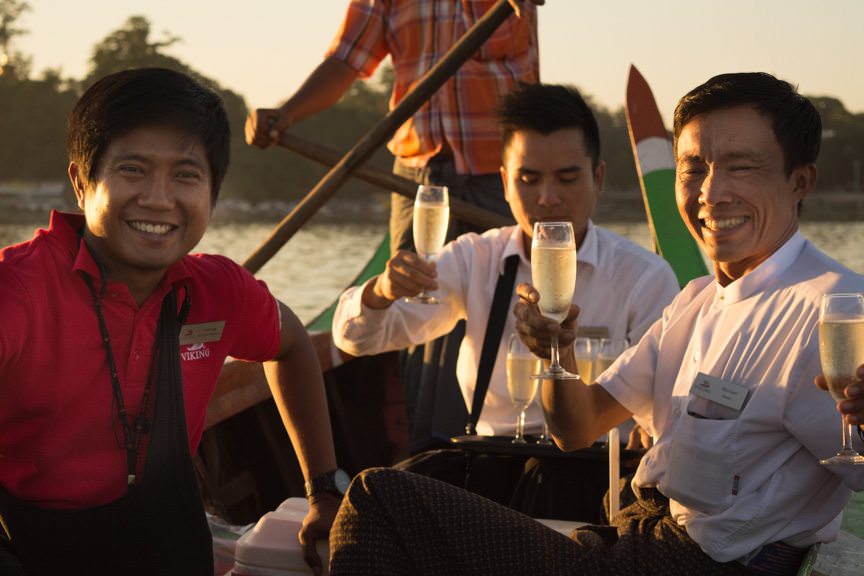 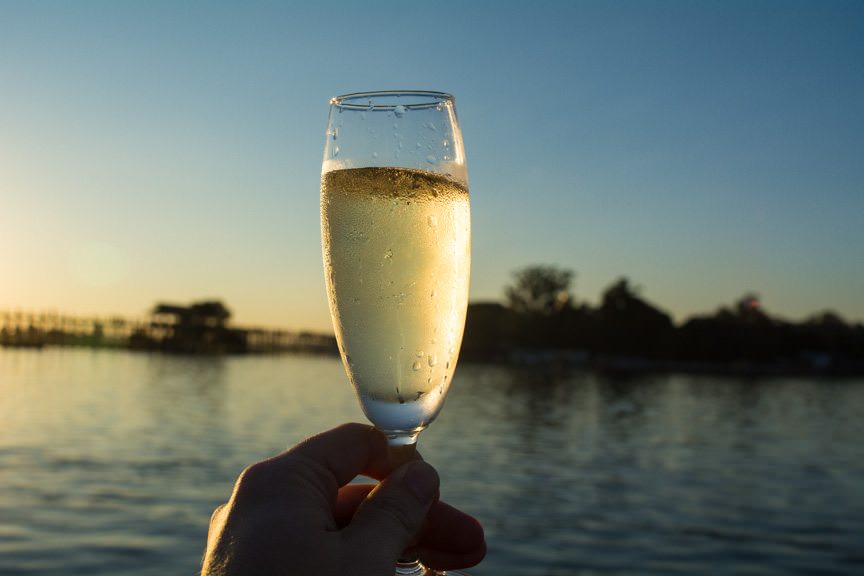 This is what I came to see; the unexpected, the beautiful, and the magical things that differentiate one place from another. There is no other U Bein bridge in the world. Both bridge and experience are uniquely Burmese. There’s nothing manufactured here – no recreations or safety barriers, no tourist-friendly gadgets and trinkets. In a world that strives to offer Disneyland-like control over many vacation experiences, this took the cake for me. After all, it’s just a bridge that locals have been using for more than a century that happens to benefit from some of the most spectacular sunsets in the country.

You could argue that tonight was manufactured, and to some degree, it was: Nothing tonight happened by accident. Viking arranged for the boat rentals, timed the itinerary, and placed us smack-dab at the right spot 30 minutes before sunset.

But Viking also did something beautiful by placing us in boats and serving us champagne. Viking let Mother Nature do the rest. And we ended up with something truly special. 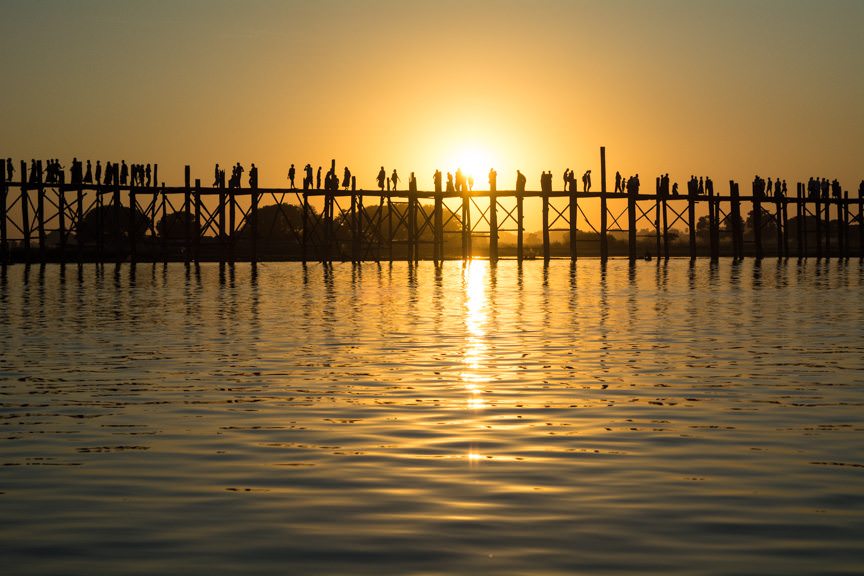 Our Live Voyage Report from Viking River Cruises’ Myanmar Explorer continues tomorrow with some scenic cruising aboard the gorgeous Viking Mandalay! Be sure to follow along with our adventures on Twitter @deckchairblog.