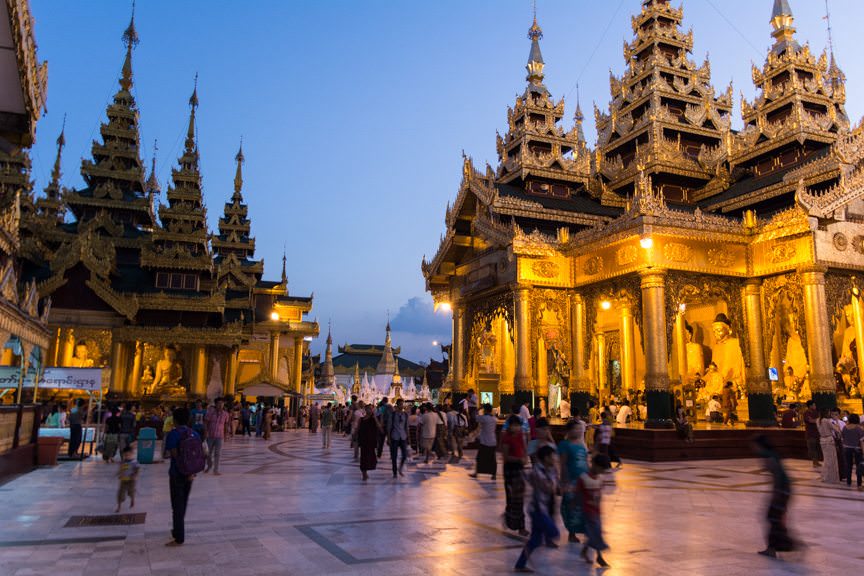 I have to admit I am enjoying the pace set by Viking River Cruises on this 15-day Myanmar Explorer river cruise tour. Rather than trying to cram too much into the schedule, this has to be one of the more balanced river cruise tours I’ve taken part in – and that’s a good thing. Between the heat and the lingering jet lag, I’ve been going to sleep early each night. For me, five to six hours is a typical night’s sleep on an average day. Here, I’m getting closer to eight.

I’m All About The Exploration: strolling the streets of Yangon. The Bogyoke Market is pictured. Photo © 2015 Aaron Saunders

As if Viking recognizes that, this morning was ours to enjoy at our leisure. With no organized tours scheduled to depart until this afternoon, guests could choose for themselves how much – or how little – they wished to do.

After a great sleep at the Sule Shangri-La here in Yangon, I found myself up and showering just after six. I made my way down for breakfast in the now-usual way, arriving just after seven and picking up a copy of the local English language newspaper to read over my meal. 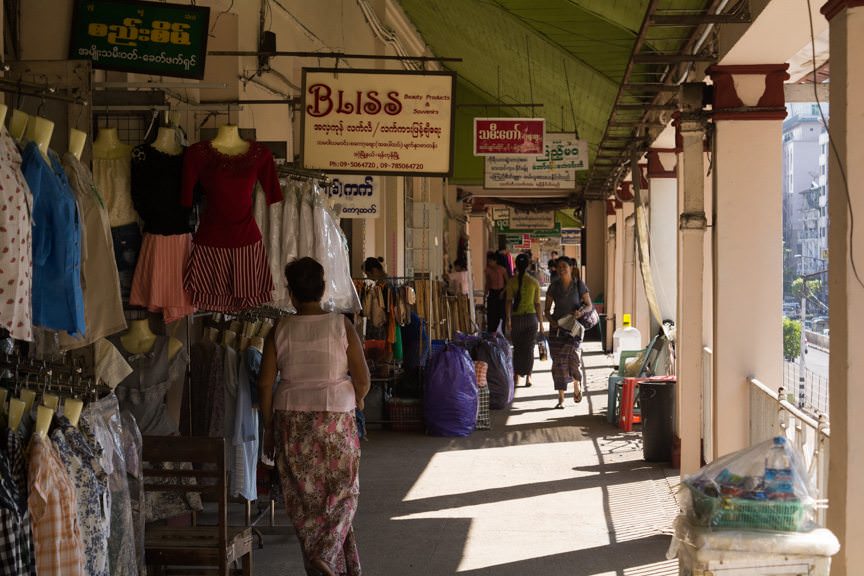 I’d made plans with some fellow guests to have breakfast with them, then hit up Yangon’s Bogyoke Market and the National Museum of Myanmar. They wanted to walk the three or so kilometres to the National Museum and take a cab back on the return, and that sounded like music to my ears. So, just after nine this morning, we set out on our own unguided adventure.

If you’re wondering about personal safety in Myanmar, let me put it this way: You’ve got a far better chance of being mugged, robbed, or harassed in the Bahamas than you do here in Myanmar. In fact, our walk to the Market was free of any hassles or obstacles.

People smile at you, and you find yourself smiling back. Tourists are still a bit of a novelty here, as are Caucasians. Expect a high degree of kindness and patience from the locals in general. 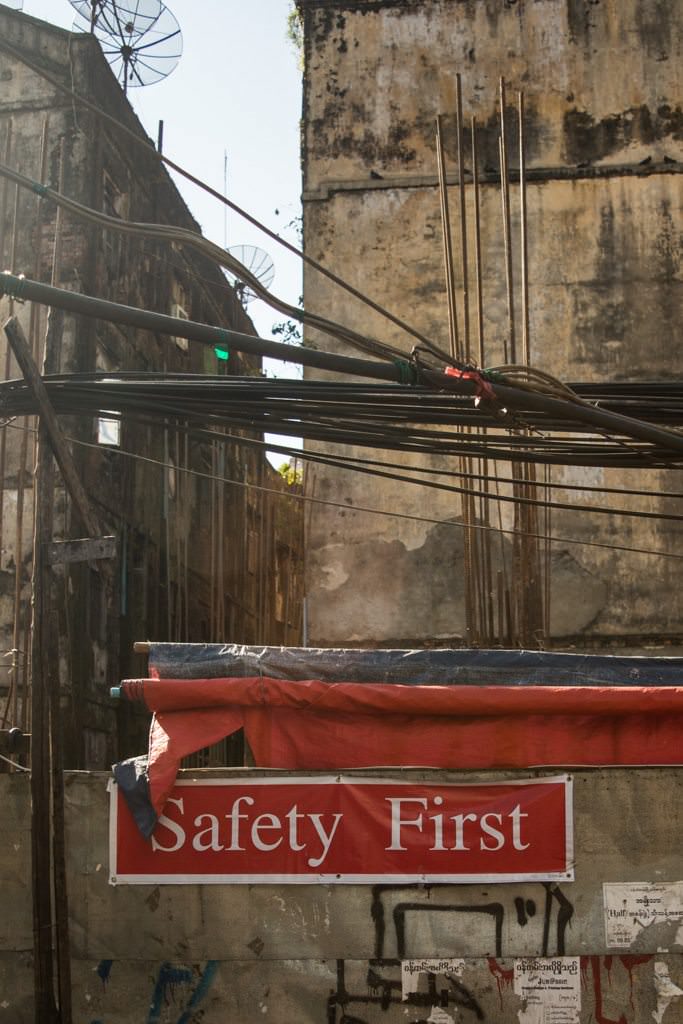 To get to the Bogyoke Market, we had to pass the first and only KFC in all of Myanmar. Recently opened, it’s apparently quite popular with the locals who share the same fascination with Western culture that many Southeast Asian counties do. Whitening creams are very popular here. The idea: Paler skin is more beautiful. It’s not an idea I agree with.

The Bogyoke Market was created in 1926, and today serves as one of the markets aimed squarely at you and me – tourists. However, this is a serene, relaxing market experience as far as Southeast Asian markets are concerned. Vendors are friendly and hassle-free, and the selection is absolutely huge. 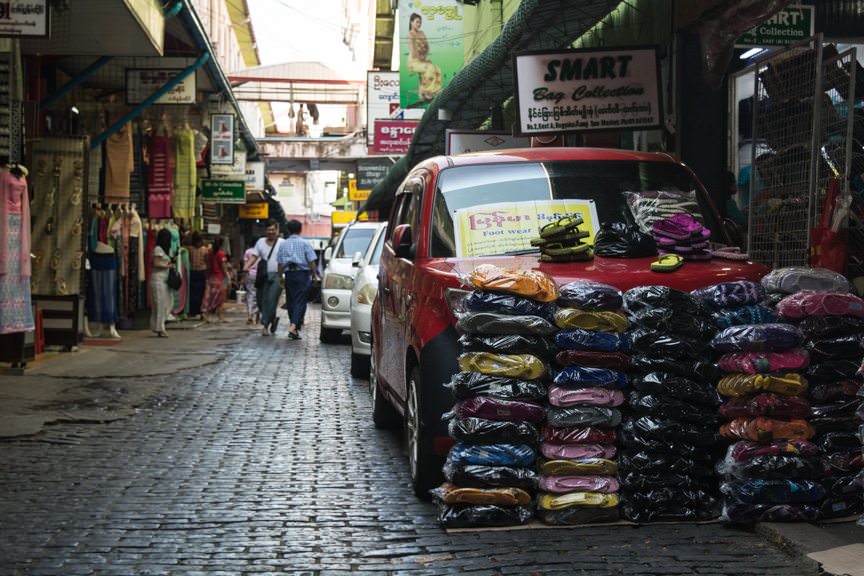 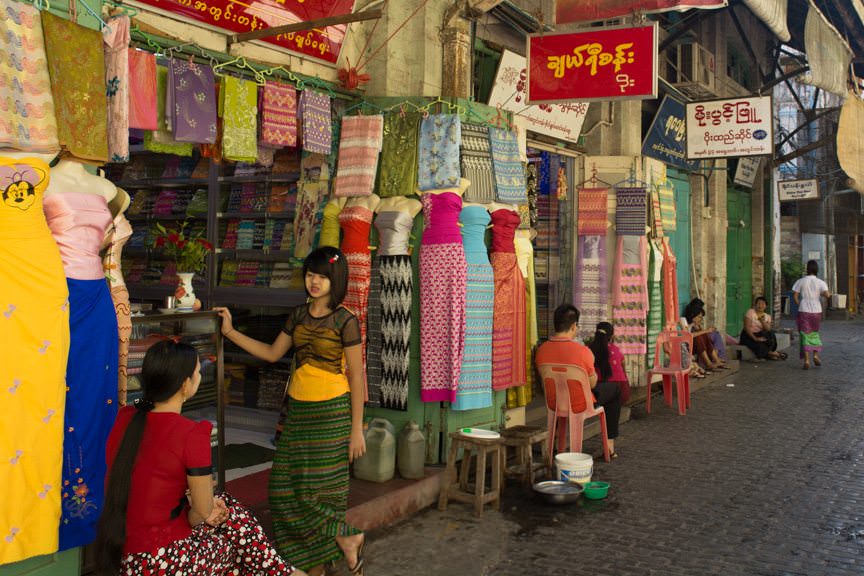 … and you won’t be accosted as you would in many markets in Southeast Asia. Photo © 2015 Aaron Saunders

One thing to watch out for: Not all vendors will add the applicable “zeroes” when pricing things in U.S. dollars. I went into a jewellery shop and saw something that caught my eye; for US$16, I thought, it looked like a bargain. A really good bargain. Diamonds glittered like they were real, and the entire object sparkled. Vendors are friendly and hassle-free, and the selection is absolutely huge. You know the old adage, “if it sounds too good to be true, it probably is”? Correct: what I though was $16 was US$16,000. Needless to say, I put it back. 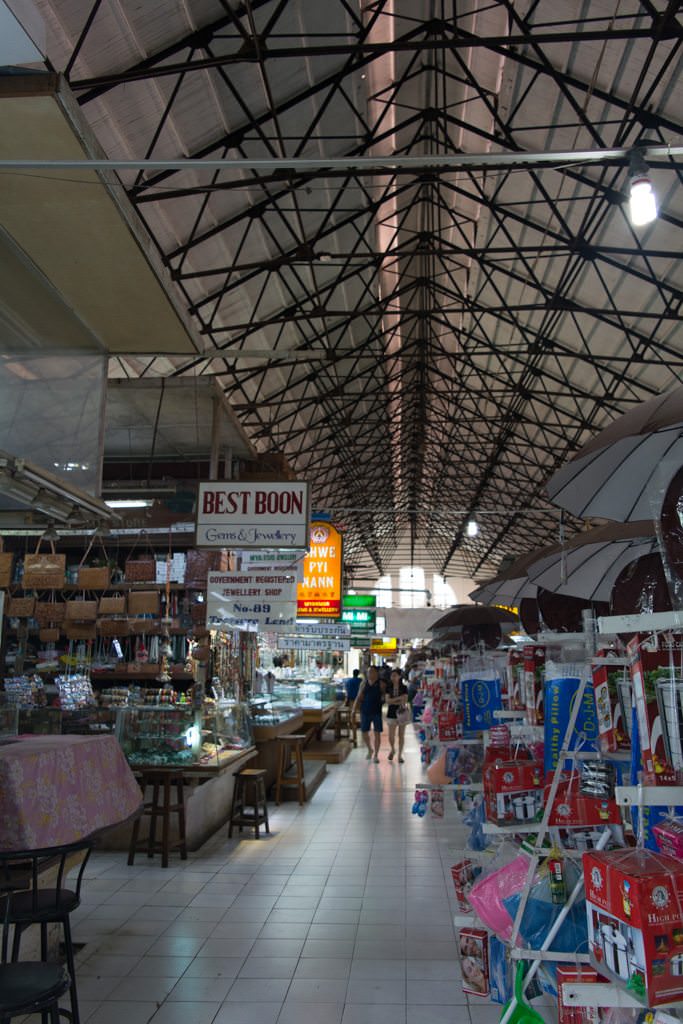 Following our sojourn to the market, we walked the three kilometres (thereabouts) to the National Museum. A drab, 1960’s sort of structure, admission here is merely 5000 Kyat – or about US$5. Cameras are banned. Backpacks are banned. iPhones are banned. Already leery about having to place my expensive Nikon and my backpack in a rickety-looking keyed locker, I attempted to sneak my iPhone in via my pants pocket. No dice: The eagle-eyed admissions lady spotted its tell-tale outline and told me to put it in the locker too.

Inside, the museum has all the sparkle and charm of a correctional institution, with the cheap fluorescent lighting to match. It’s poorly air conditioned, poorly lit, and poorly laid out. Signage is primarily Burmese, with a smattering of English thrown in every so often to tease foreigners with the potential for information. It’s a shame, because there are some truly stunning relics here from Myanmar’s ancient past. Is it worth going to? Yes – but pack your sense of interpretation – and don’t forget to visit the forgotten Fourth Floor, where some amazing examples of Burmese artwork is on display. 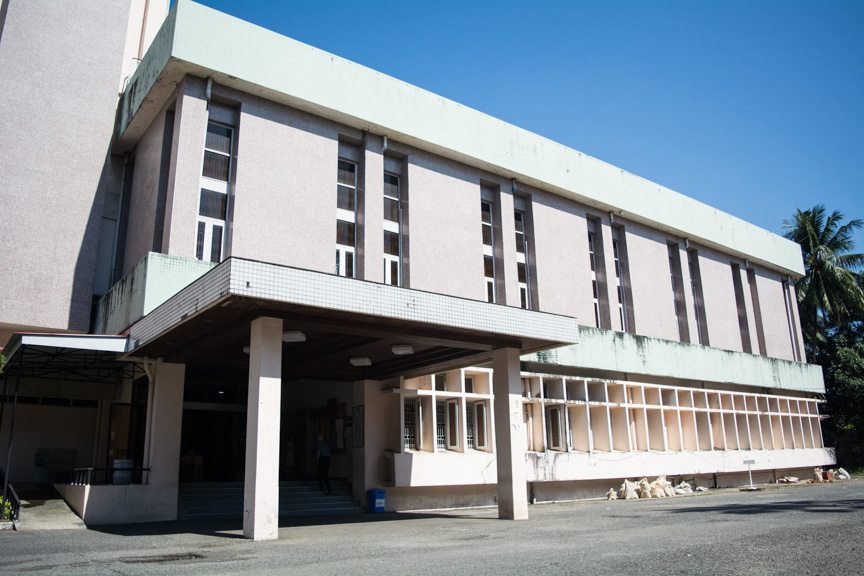 With the heat of the day creeping on, we took a taxi back to the Shangri-La for the astonishing price of K5000; again, US$5. I didn’t even feel like haggling with the guy; Five bucks seems like a steal to anyone who’s ever taken a cab in New York City.

After lunch at the Shangri-La (with my cop-out choice of a Club Sandwich taken with a local Myanmar lager), our afternoon tour began – and what an afternoon it was.

Our destination this afternoon was the breathtaking Shwedagon Pagoda. Legend has it that it dates back as far as 588 BC, but it seems more likely that the site was first created sometime between the sixth and tenth centuries. Still, Shwedagon is the oldest stupa in Myanmar, if not the entire world. It is to Myanmar what the Pyramids of Giza are to Egypt, or the Acropolis is to Greece. 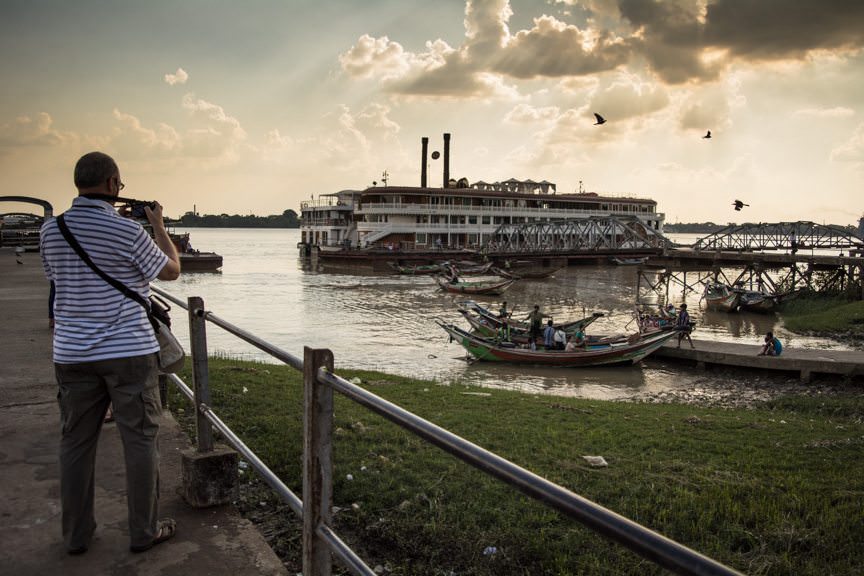 Before traveling to Shwedagon Pagoda, we stopped first for a panoramic vista of the riverfront in Yangon. Photo © 2015 Aaron Saunders 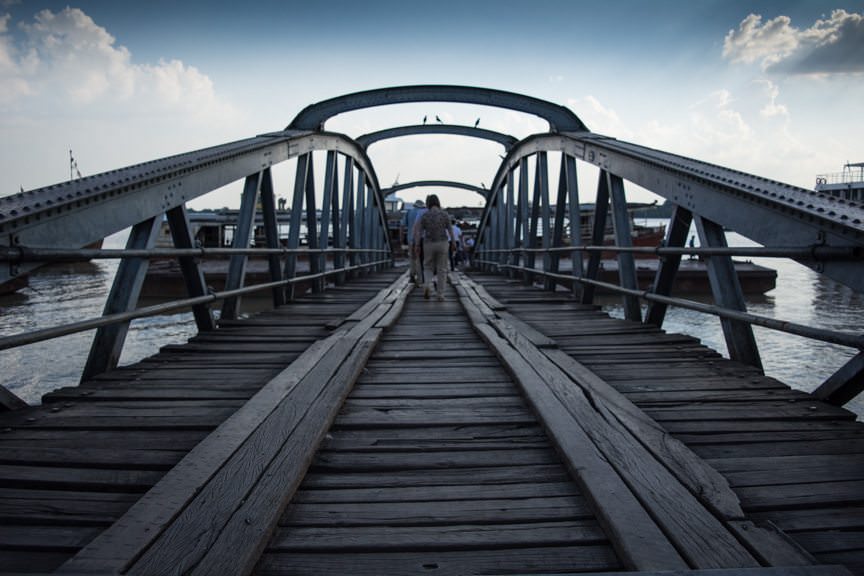 We were given two choices to ascend to the Pagoda complex: Take the elevator, or ascend the 108-step Southern Staircase. The trick is, we’d have to do both barefoot: to properly pay respect in this Buddhist culture, shoes and socks must be taken off before visiting such a sacred site.

I chose to walk; after all, “when in Yangon.” Unfortunately, most of my fellow guests weren’t as adventurous: All but four elected to take the elevators. 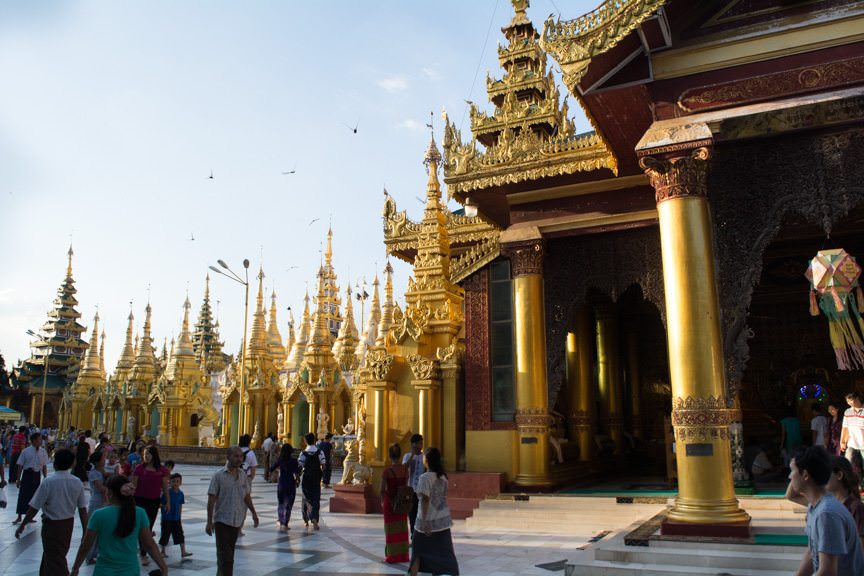 Now, I’ll be honest: Until you reach the entryway to the stairs, the pavement is hot. It’s also rocky, pebbly, and altogether uncomfortable for the first 800 feet or so. But once you reach the covered staircase, the surface is smooth and manufactured, and the temperature drops considerably. It took all of a few minutes to ascend the 108 steps and reach the top of the Shwedagon Pagoda complex.

This is a good time to point out I’m not a religious man. I’m not really an atheist; I just don’t subscribe to any particular religion. After visiting Vietnam and Cambodia in 2013, however, I came to appreciate a number of things about Buddhism. So the ceremonies and rituals interest me greatly. And walking around this amazing complex at dusk, as the sun set, was nothing short of ethereal. 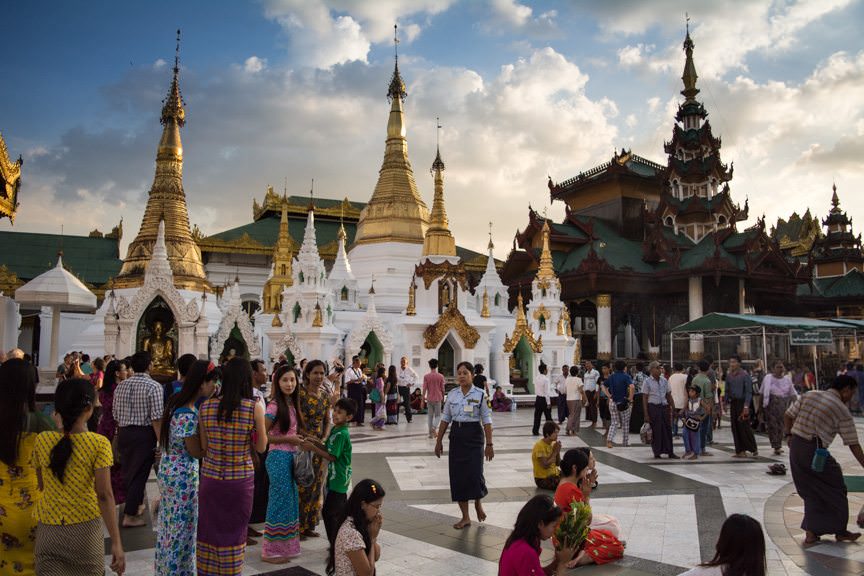 Shwedagon also proves size does matter: The main gold stupa was raised once in the 1300’s by a height of 18 metres, and again by 80 metres in the 1400’s. The latter was on order of Queen Shinsawbu, who also began the tradition of gilding the stupa in gold.

Our guide, Andy, gave us over an hour to explore this magnificent complex on our own. He said he’d meet us at 6 p.m. beside “Tuesday Corner.” Shwedagon has a number of corners that correspond with the days of the week. Astrology is serious business in Myanmar, and people come to pay respects to the planetary posts – or Gods – of the day of their birth. 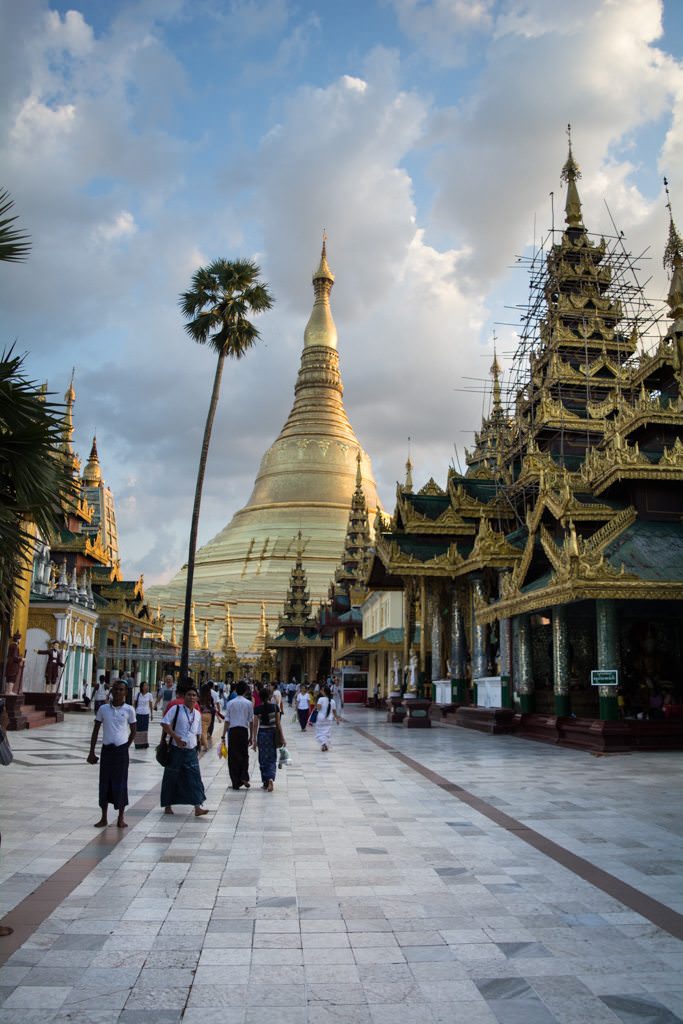 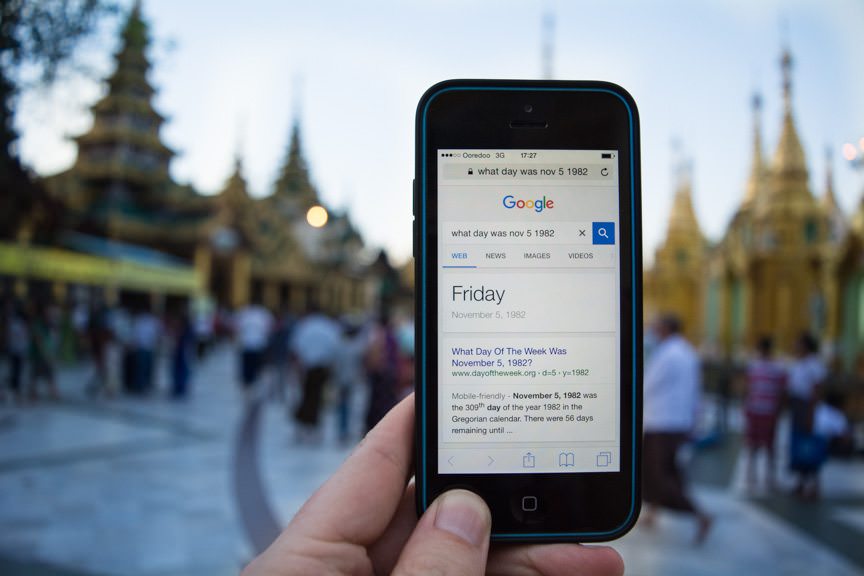 I realized I had absolutely no idea what day of the week I was born on. I wandered around the complex for an entire hour before I realized the answer was in my hip pocket; I pulled out my iPhone and made good use of my travel data plan, googling my birthday. Turns out I was born on a Friday, so I made a beeline for “Friday Corner” and did as the locals do. Hey, it can’t hurt! 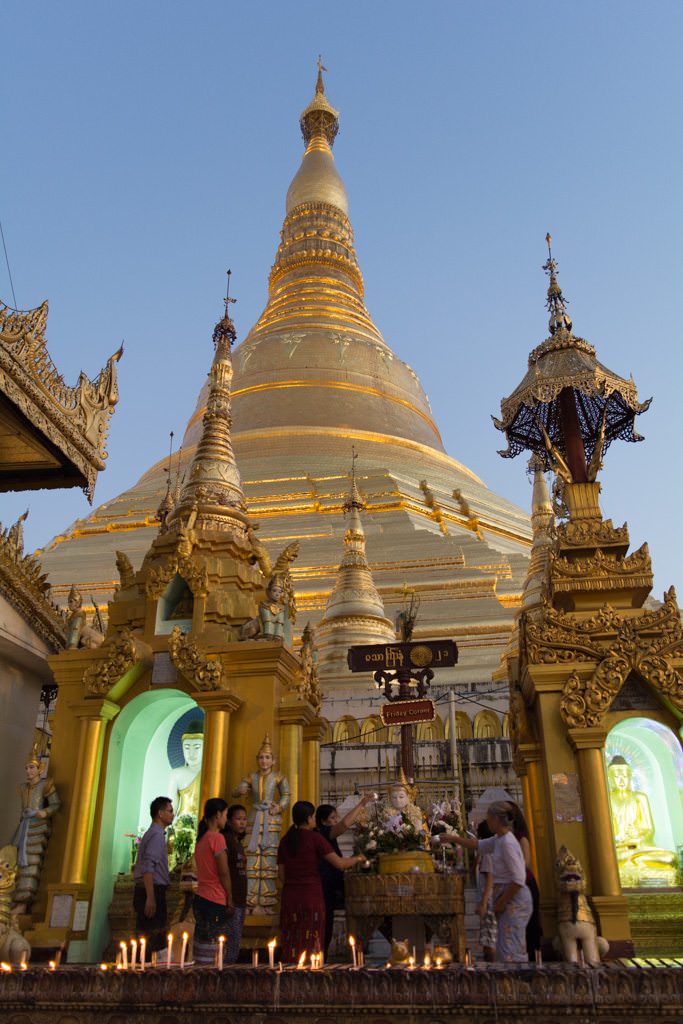 Hanging with my ‘peeps at Friday Corner. Photo © 2015 Aaron Saunders

I came away tonight with a feeling of calm after visiting Shwedagon. I felt oddly at peace. Those who know me know I rarely sit still. I’m always on the go, and I am a world-class worrier. But none of that mattered at Shwedagon; it was as if I’d just had a glass of really good wine, or an excellent massage. I felt calm. 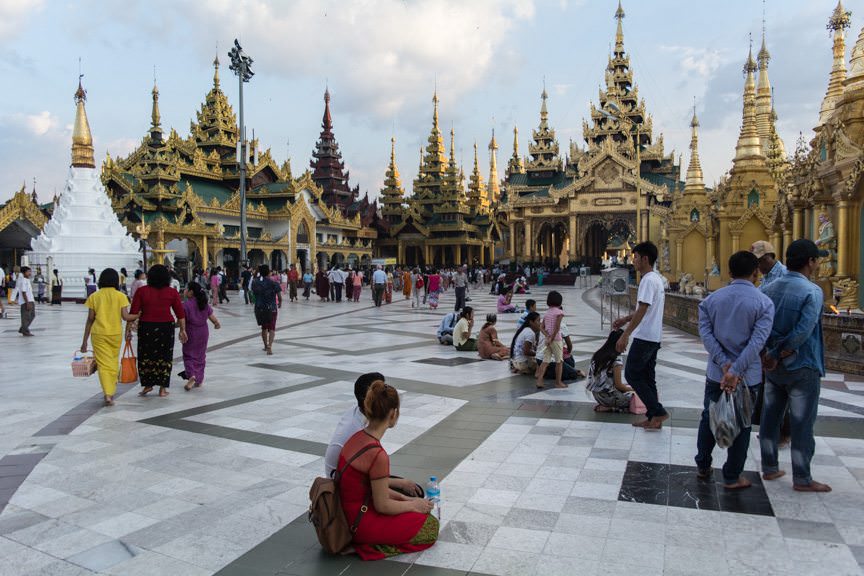 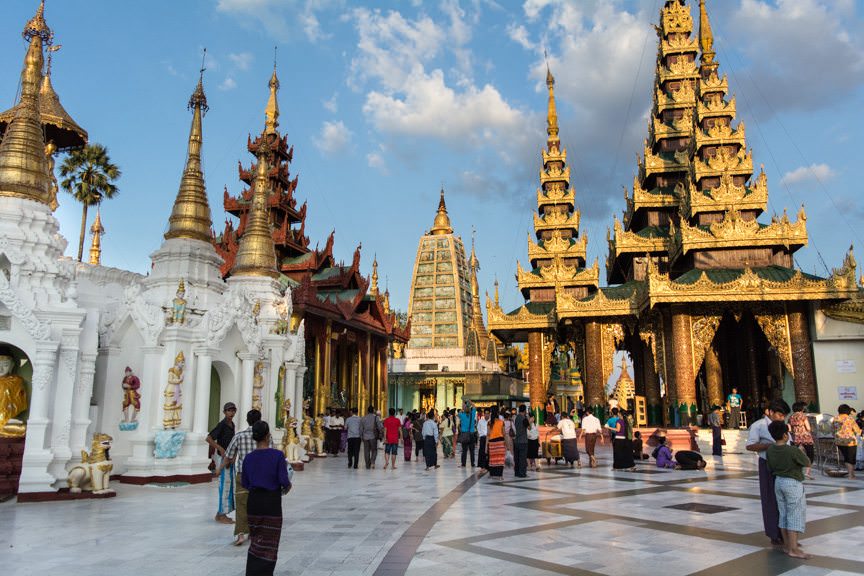 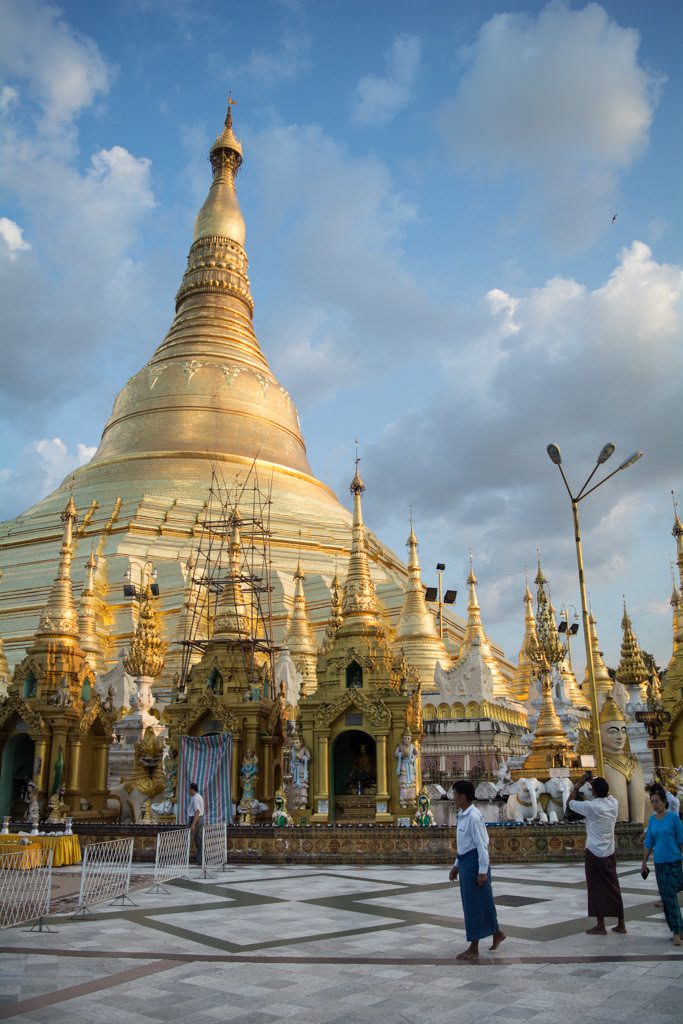 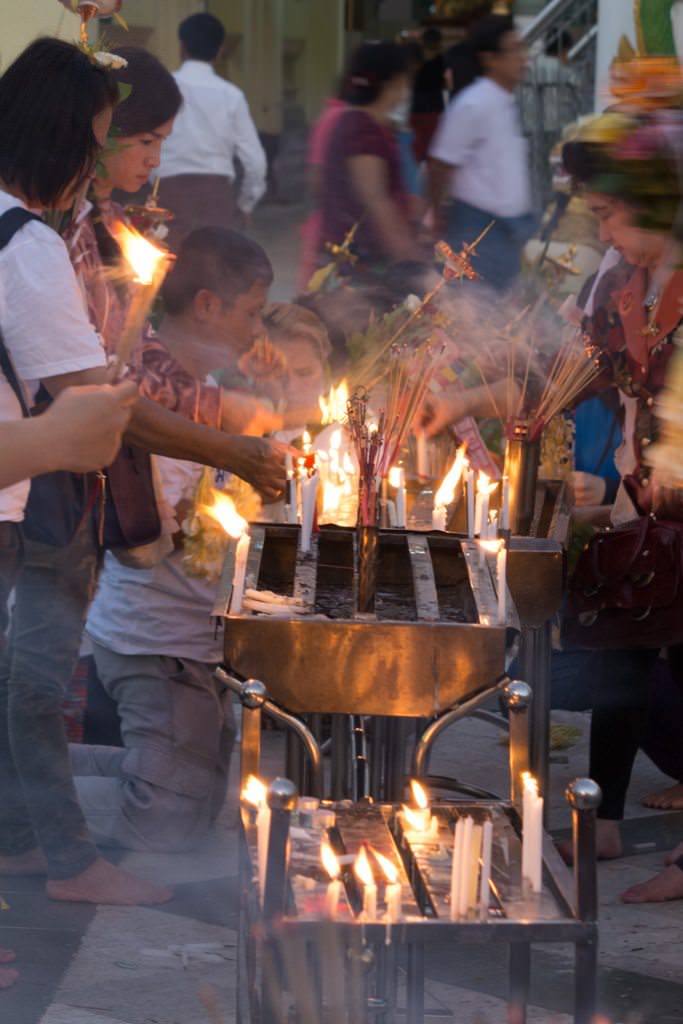 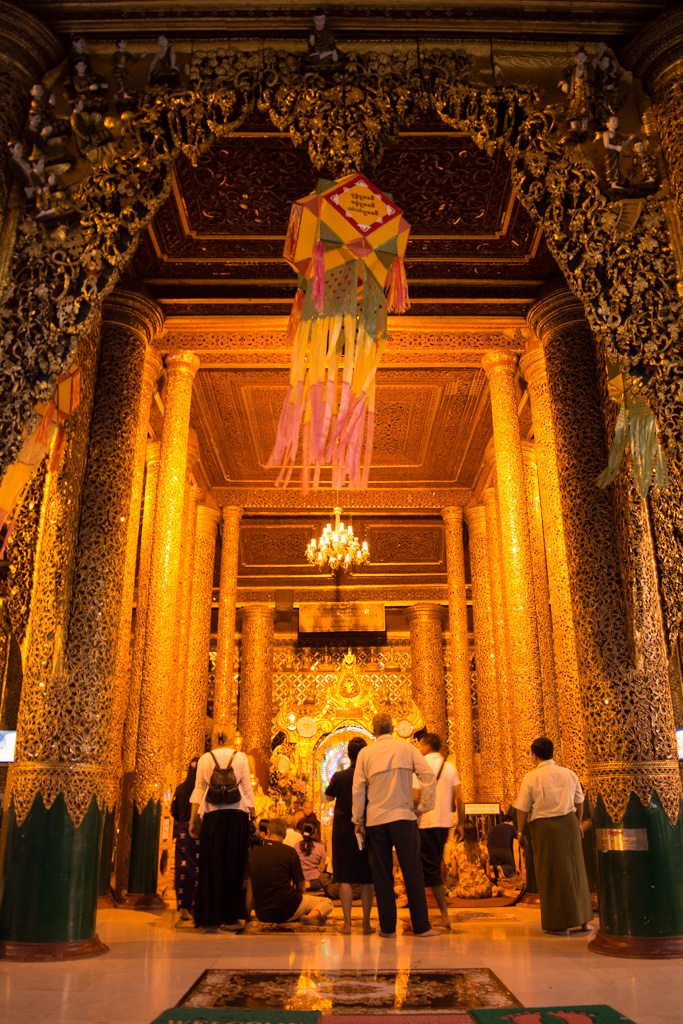 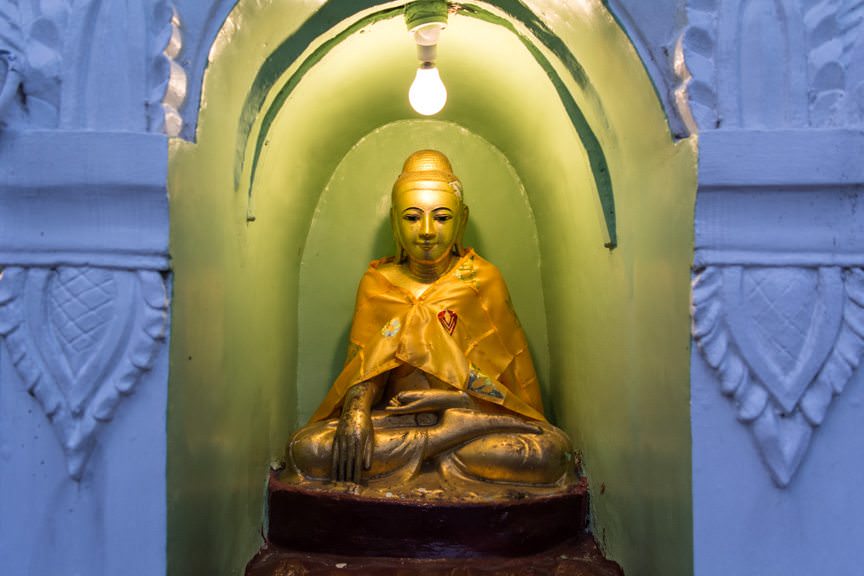 Travel is about all about discovery and understanding – and I feel I accomplished both of those tonight. This may not be your world, but that doesn’t make it any less moving. 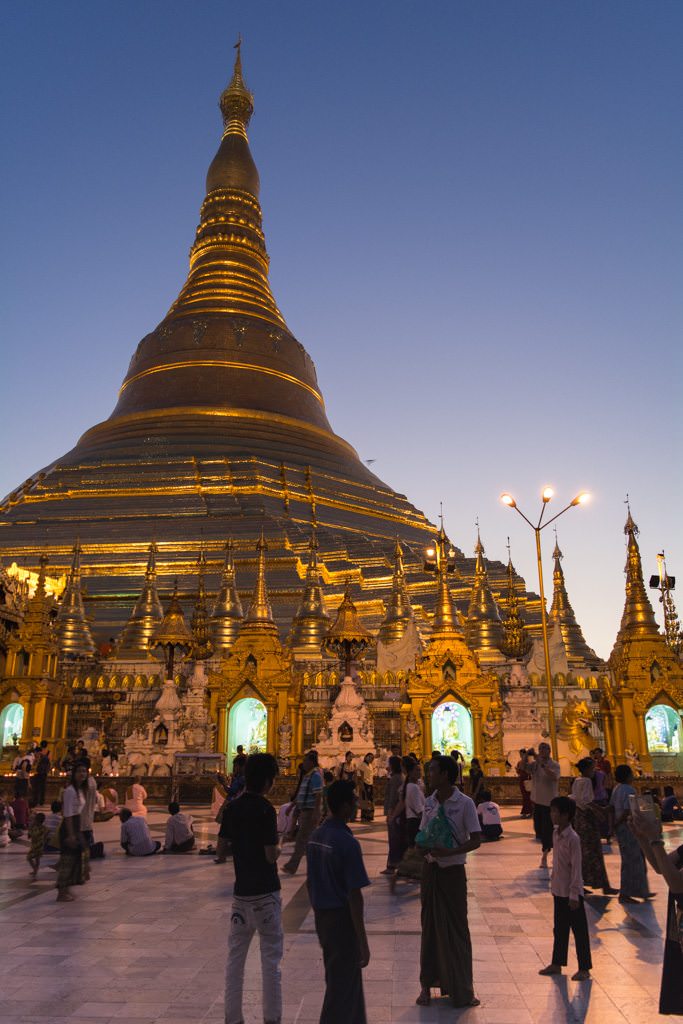 Our Live Voyage Report from Viking River Cruises’ Myanmar Explorer continues tomorrow as we fly to Heho and Inle Lake! Be sure to follow along with our adventures on Twitter @deckchairblog.