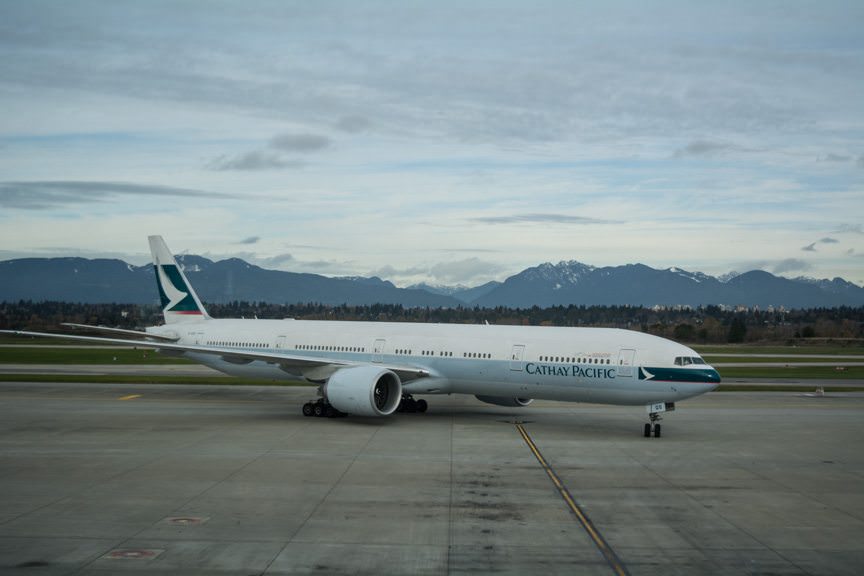 Let’s be honest: It’s a long-haul to get from North America to Southeast Asia. I arrived at the Shangri-La Bangkok at about 2:30 a.m., delayed by long lines at Thailand immigration and a flight that took off nearly two hours late from Hong Kong. And yet, I’m excited – excited to be here, excited to have yet another new experience.

I am in Bangkok, Thailand to join Viking River Cruises’ brand-new Myanmar Explorer cruise-tour itinerary. Running 15 days in length, it conveniently starts and ends in Bangkok, which is far easier for most of us to reach than actually flying into Yangon, Myanmar. Instead, we’ll be treated to a full day of exploration in Bangkok before flying to Yangon together, as a group, on Saturday.

Still, it’s a heck of a journey just to get to Bangkok. With that in mind, let’s talk about what it takes to fly here – and why you shouldn’t fear long flights if you’ve never been on one. 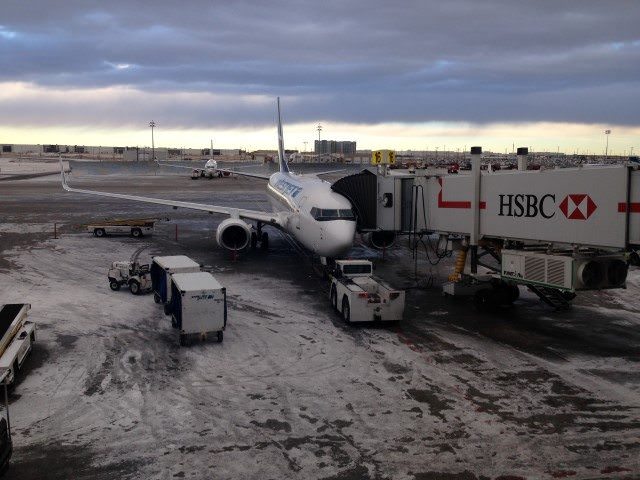 Brr! My journey began in Calgary, Canada, where fresh snowfall would provide an interesting contrast to my final destination. Photo © 2015 Aaron Saunders

My journey began on Wednesday the 18th, and it was early on Friday the 20th when I arrived. To start, I boarded a WestJet flight to Vancouver, then hopped onboard Cathay Pacific flight 837 to Hong Kong’s Chek Lap Kok airport. From there, I traded my Boeing 777-300ER for a Cathay Pacific Airbus A330-300, which would take me to Bangkok just three hours later aboard CX 617.

It’s a 14-hour journey across the Pacific from Vancouver to Hong Kong, and while that may seem like a long time, consider this: Many North Americans will fly between eight and ten hours from North America to Europe, so a 14-odd hour flight to Asia is really only one more lousy in-flight movie and another meal service over a flight to London. 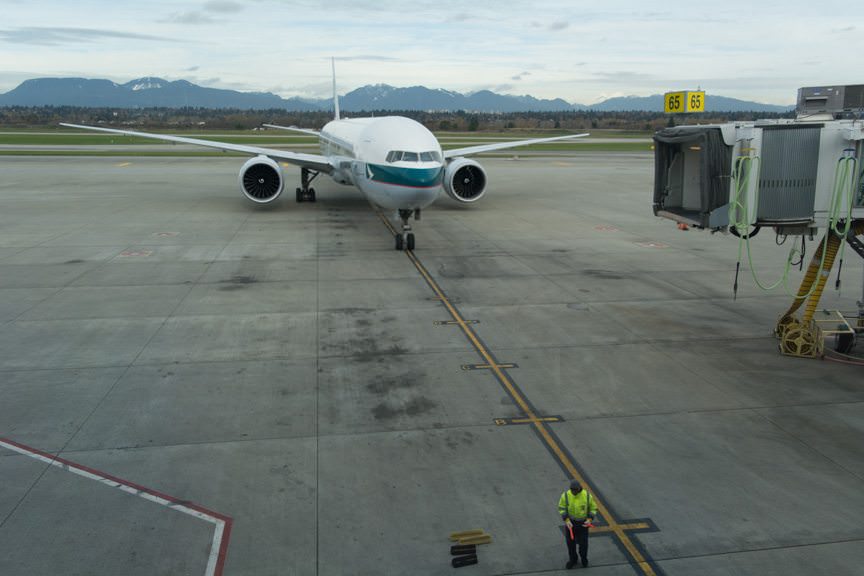 In Vancouver, my Cathay Pacific 777-300ER arrives to whisk me across the Pacific to Hong Kong. Photo © 2015 Aaron Saunders

I also tend to be very choosy about who I fly with for 14 hours. Cathay Pacific won this one, no contest. Even in economy, the airline offers plenty of seat pitch (the amount of room between your kneecaps and the seat in front of you), and wide seats.

My other alternatives were Air Canada and ANA. I was tempted to fly with Air Canada because I have Star Alliance status with them, but the thought of being crushed into the coach section of their new Boeing 787’s was too much for me. As for ANA, it would require a connection in Seattle that I wasn’t nuts about; no point clearing customs more times than absolutely necessary! 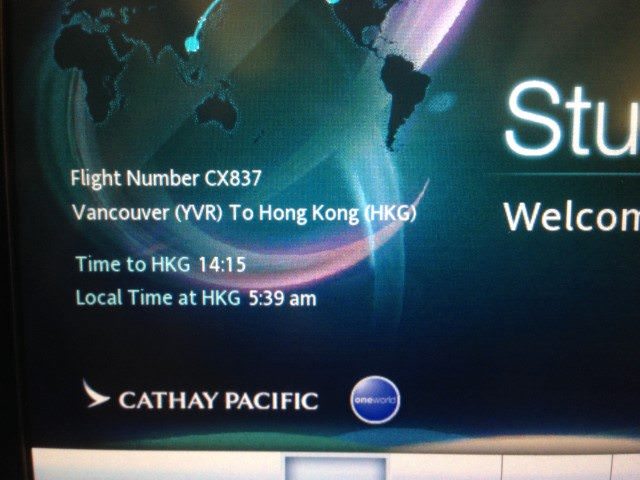 My Cathay Pacific flight to Hong Kong took off nearly an hour late, and coupled with strong headwinds that added another hour to our flight time (over 14 hours in the air, total), we arrived in Hong Kong very late. So late, in fact, that I would have missed my connecting flight to Bangkok – had it, too, not been massively delayed.

So, I found time to eat McDonalds at the airport and grab a Starbucks coffee. Bemoan me if you must for my choices, but I stand by them. Sometimes, you just want a Big Mac and a Chai Latte.

The caffeine was necessary, but even then I found myself nodding off during the safety video on the flight to Bangkok. I pulled-to and managed to watch four episodes of Entourage and two Brooklyn Nine-Nine shows before we began our descent. We were even fed on this short, three-hour jaunt to Bangkok; I had a rather tasty pasta dish that helped ensure I didn’t arrive hungry. 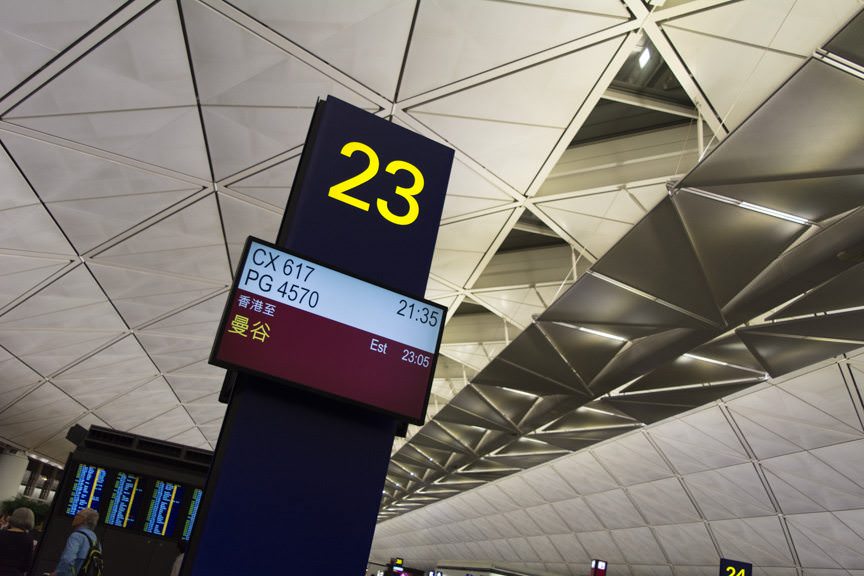 Shortly after 1 a.m., CX 617 touched down in Bangkok. Our Airbus A330 taxied over to the gate and the rush to get off – muted somewhat by the fact half the plane was exhausted – began.

If you’ve never been to Bangkok before, here’s the lowdown on Suvarnabhumi Airport. One, it’s big. Two, it’s gorgeous, with plenty of oversized glass windows that wrap attractively around the inner structure. And three – it’s busy. Even approaching two in the morning.

You’ll walk a couple miles to reach immigration, and take my advice: Use the restroom first. I didn’t. I regretted that decision when I saw how enormous the customs and immigration line was at 1:45 in the morning. Seriously – it took 30 minutes to clear immigration. I’d hate to think of what a mid-day flight is like. 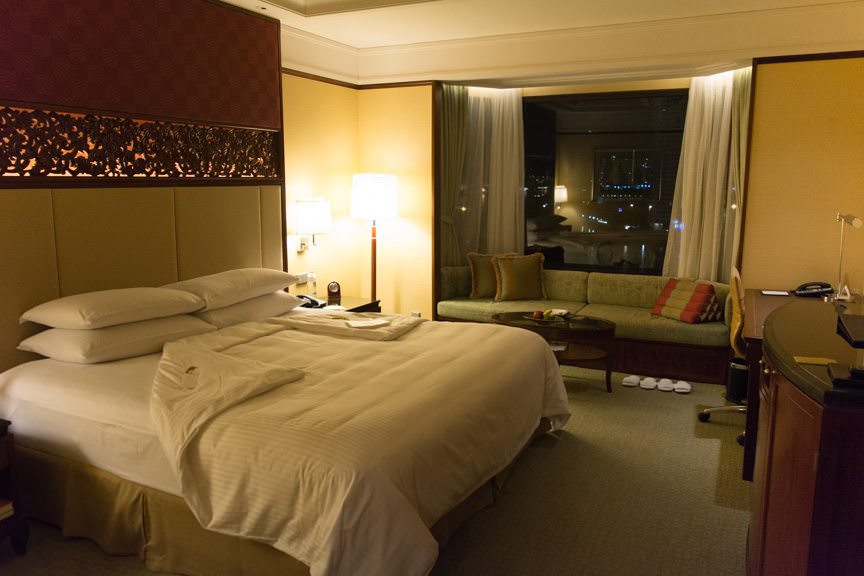 Hello, Bangkok! My room at the Shangri-La Bangkok, where I arrived just after two in the morning. Photo © 2015 Aaron Saunders

American and Canadian citizens do not need a tourist visa, so entry is a rather uncomplicated affair. Still, Thailand has you fill our an entry and exit form, and you must keep the exit form with you until you leave the country. Which, for me, will be tomorrow afternoon, as we make our way to Myanmar.

Given my late arrival, I didn’t have much hope that anyone from Viking would be at the airport to greet me. After all, a 2 a.m. pickup is hardly palatable for anyone. But as I navigated the zoo of people waiting for arrivals at two in the morning (seriously – it’s insane!), I saw Nat – one of Viking’s local agents. He greeted me at the airport, led me outside to a waiting Toyota van, and provided me with our entire itinerary for the day ahead.

I was truly impressed. I was already working out in my head currency conversion rates and taxi journeys, and once again, Viking took care of all of it – as they would with any guest.

The bottom line is this: Once you’re here, you’re here – and this journey already looks like it will be well worth it!

Our Live Voyage Report from Viking River Cruises’ Myanmar Explorer continues tomorrow as we spend the day touring Bangkok, Thailand! Be sure to follow along with our adventures on Twitter @deckchairblog.