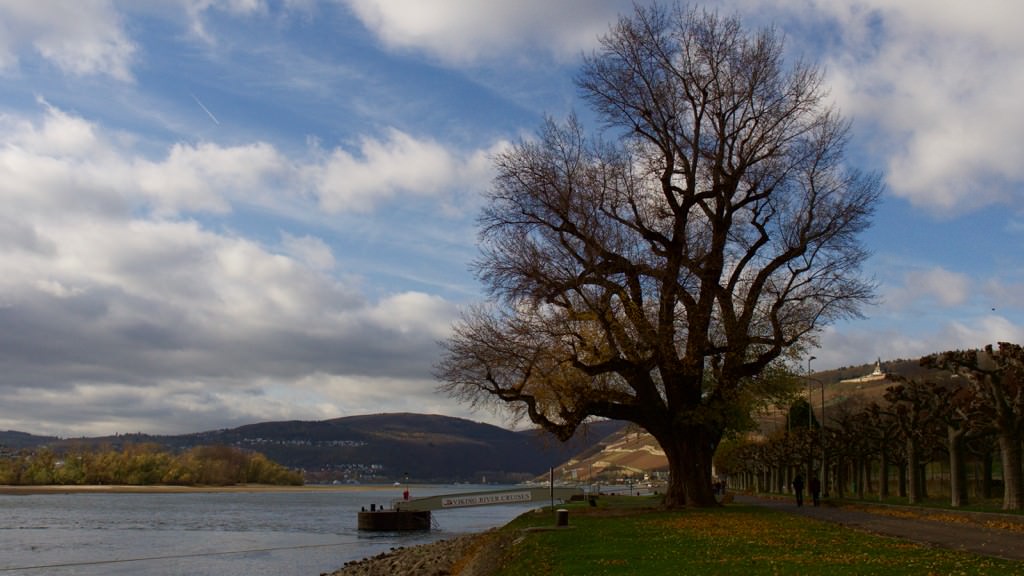 A lonely – and lovely – November day on the Rhine River in Germany. © 2015 Ralph Grizzle

During a seven-night cruise from Basel to Amsterdam, where we disembarked on Wednesday of this week, I asked myself: Is AmaWaterways more adept than its competitors when it comes to navigating low water?

I had good reason to pose such a question. Rhine river levels have been at historic lows. On some stretches of the river during our sailing, we had only a few inches of water underneath our keel. Once, when pulling away from the dock in Rudesheim, Germany, AmaSerena scraped the bottom of the river. 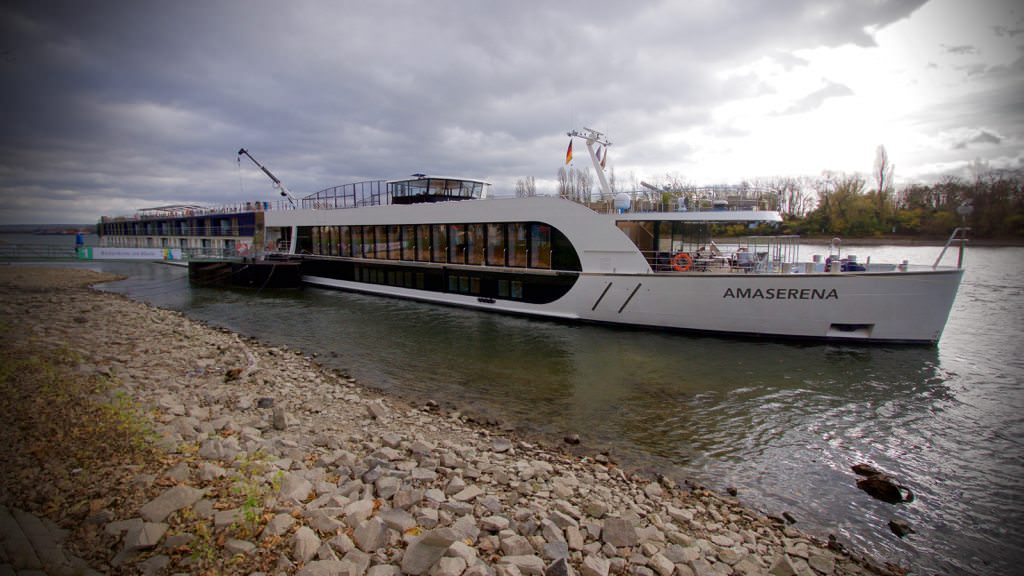 AmaSerena docked in low water on the Rhine in Rudesheim, Germany. © 2015 Ralph Grizzle

Though other vessels were scheduled to do Rhine sailings, AmaSerena was the only river cruiser that I saw sailing the shallow stretch of river between Rudesheim and Koblenz.

Jan de Bruijn, AmaSerena’s captain, said he has cruised the Rhine for more than four decades and has seen river levels this low only twice in his career. “When we arrived [in Rudesheim] this morning, it was very hard to dock; there’s no water here,” he told me over a coffee in the lounge aboard AmaSerena. “Under the ship at the moment we have only 30 to 40 centimeters of water. Normally we would have two meters.” That’s only about a foot of water beneath the ship, compared to six feet under normal conditions.

Moreover, AmaSerena’s draft, the distance from the water’s surface to the lowest point of the ship, is normally about 165 centimeters (a little more than five feet). During our sailing, ballasts were emptied to bring AmaSerena’s draft to 148 centimeters. Instead of carrying one week of fresh water, we were carrying only 1.5 days of water — more than enough to get us to Koblenz, however.

Having more of the ship exposed above water (and less of it below) made navigation challenging, particularly in the windy conditions we faced on the river earlier this week. 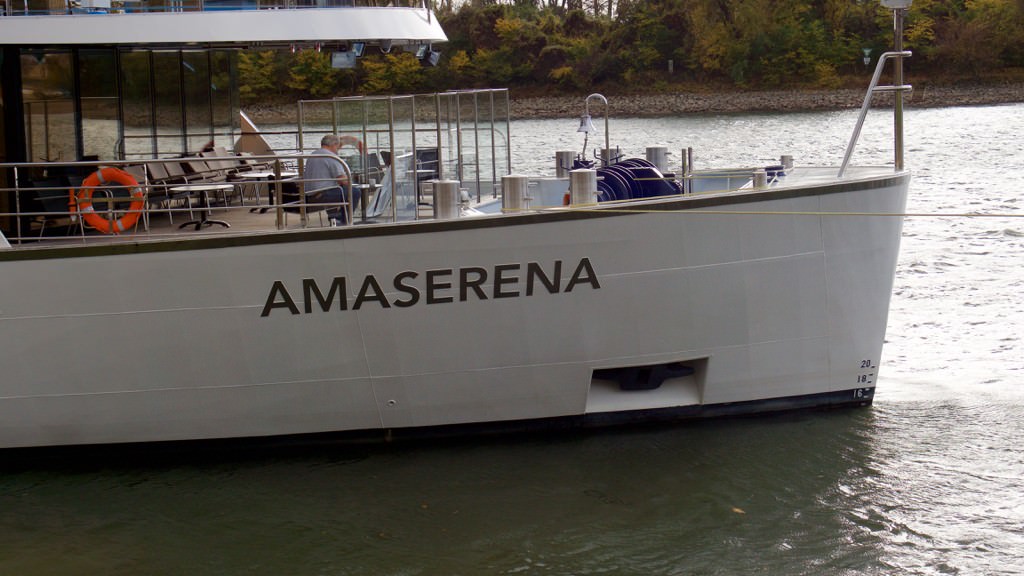 The water level indicator shows a draft of 148 centimeters (about 58 inches, compared to 65 inches under normal conditions ). © 2015 Ralph Grizzle

To assure the ship doesn’t become grounded or damaged, the front ballasts are kept weightier than the back ballasts, so that the propulsion system isn’t the first to scrape the bottom. “We’ve been sailing very smoothly,” said Captain de Bruin, “just a bit more slowly.” Indeed, the passage from Rudesheim to Koblenz would require six hours, compared to four under normal conditions.

Ingo Eigen keeps track of the river levels at his website, rivercruiseinfo.com. “All levels are really, really low; especially the Rhine level is unusually low,” he wrote to me in an email. “Last time I know of when it was close to this (but not as bad) was in December three or four years ago. We’ve been having low-water issues since summer, and I don’t expect it to ease up this year.”

In recent months, Rhine river levels measured at Kaub, Germany, near the Rhine’s midway point between Rudesheim and Koblenz, have been at historic lows, according to the U.S. Energy Information Administration. The average water level at Kaub in October was 2.8 feet, compared to the five-year average levels of nearly twice that (five feet to seven feet). 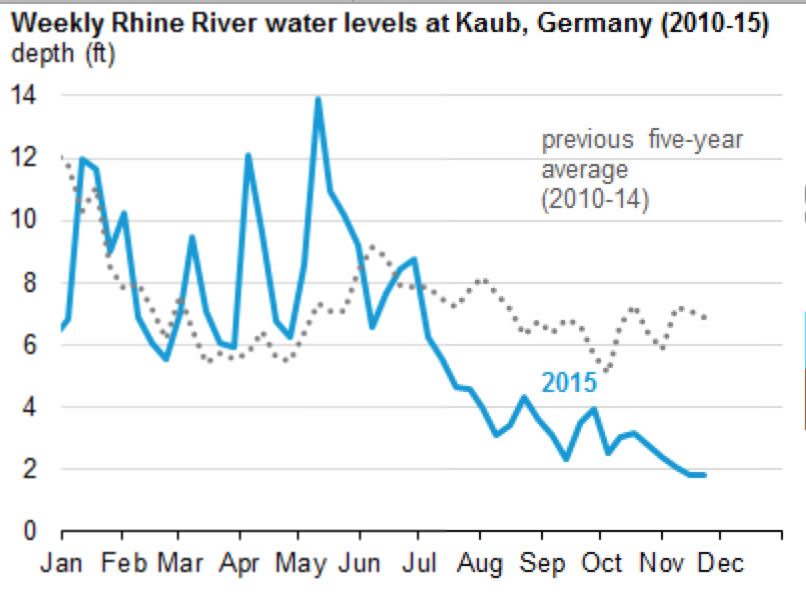 At a press conference on AmaSerena, Kristin Karst, executive vice president and co-owner of AmaWaterways, told press and agents that low water likely will be more of a concern than high water during the next few years. She said that in recent years Europe has had less runoff from snowfall during the spring, a factor that has contributed to high water in the past. “I grew up in Germany, and I have never seen such low water on the Rhine,” said Karst, who was on our sold-out voyage along with travel agents, press and revenue guests.

Water levels have also been running exceptionally low on the Danube, disrupting scheduled sailings for many operators on the rivers — but not for AmaWaterways. Karst told me that her company operated successfully on the Danube last week, when other vessels were halted by low water.

She added that in low water situations, the Rhine is usually a safer option for being able to operate without bussing passengers or changing ships. Had it been deemed unsafe for us to continue up the Rhine, Karst said contingency plans called for switching ships and to show guests the Moselle River.

Karst added that AmaWaterways’ ships were designed to operate in low water, crediting her husband Rudi Schreiner with the design features that allowed AmaSerena to transit the Rhine safely during our voyage. Of course, she also praised the nautical crew and Captain de Bruin.

In addition, Karst said the company has designed its itineraries so that its ships can avoid stretches of low water. Operating between Budapest and Vilshofen, Germany, for example, has allowed AmaWaterways to sail when others could not. The company frequently uses Vilshofen, about 20 kilometers from Passau, for turn-arounds.

The good news: It rained after we disembarked. Now, there’s plenty of water beneath the keel.

Editor’s Note: CroisiEurope’s Nicola Iannone wrote to tell us that his company’s ships were also able to navigate the shallow stretches of the Rhine last week. Indeed, CroisiEurope designed its vessels not only to sail in low water but also to reach city centers that other cruise companies cannot reach. Of the major river cruise operators, for example, CroisiEurope operates the only fleet that can make it into the heart of Paris, under the bridges to cruise past Notre Dame, and, at the other end of the Seine, into the harbor at Honfleur. The ability to offer these experiences gives CroisiEurope something that no other river cruise company can claim.