You are here: Home / Cruise Companies / A-Rosa / A-ROSA: What Are Its Smallest, Largest and Most Common Stateroom Sizes? 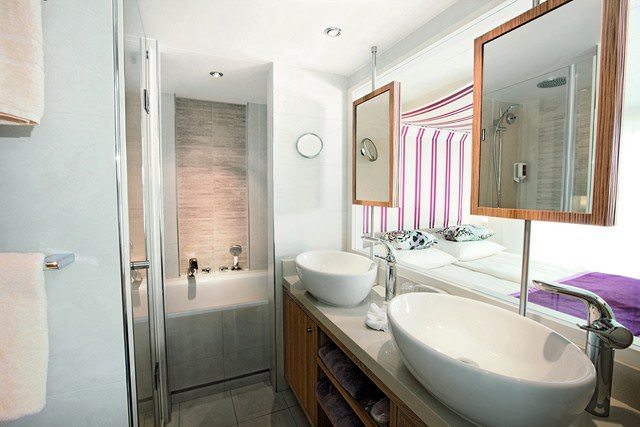 By 2016 A-ROSA will have a total of five vessels catering to English-speaking guests cruising the waterways in Europe. Itineraries are available on the Rhine, Moselle, Main, Danube, Dutch & Belgian Waterways, Rhône and Saône rivers. The company does not currently have a presence beyond Europe.

Most of the ships in A-ROSA’s fleet were built with similar specifications. For example, all ships have single cabins. And the smallest stateroom size is 156 square feet, which is the same for both single and double cabins on most ships. The exception is the A-ROSA Donna with its smallest double staterooms measuring 167 square feet.

There are some differences between the vessels with regard to largest stateroom size. The A-ROSA Flora and A-ROSA Silva are the only two ships that have balcony suites. These staterooms are 312 square feet in size.

On the A-ROSA Donna, the largest stateroom is 178 square feet. And its most common stateroom size is 172 square feet, which is larger than the other four ships.

The A-ROSA Stella and A-ROSA Viva (launches 2016) have staterooms that are all the same size, which means its largest are 156 square feet.

There are single cabins and staterooms that can accommodate 3 to 4 people on all vessels in A-ROSA’s fleet.

A-ROSA – Ships on the Rivers in Europe

So where will you find each of these ships? The A-ROSA Donna makes the Danube River her home. The only other vessel that includes the Danube in some of its itineraries is the A-ROSA Silva.

If you would like to travel along the Moselle River, the A-ROSA Flora has some itineraries that include this waterway.

And three of its vessels are featured in itineraries that combine the Rhine River with the Dutch & Belgian Waterways and may include the Main or Moselle.

The A-ROSA Stella is the only ship in its fleet that cruises on the Rhône and Saônerivers.

The table below lists all the vessels that will be in A-ROSA’s fleet by 2016. Staterooms range in size from 156 square feet to 312 square feet. You’ll find the two ships with the largest available staterooms on the Rhine River.

There are a few variations among A-ROSA’s five different ships with regard to stateroom size. Most ships have cabins that start at 156 square feet for both single and double rooms. And largest stateroom size ranges from 156 to 312 square feet. See other articles about A-ROSA.