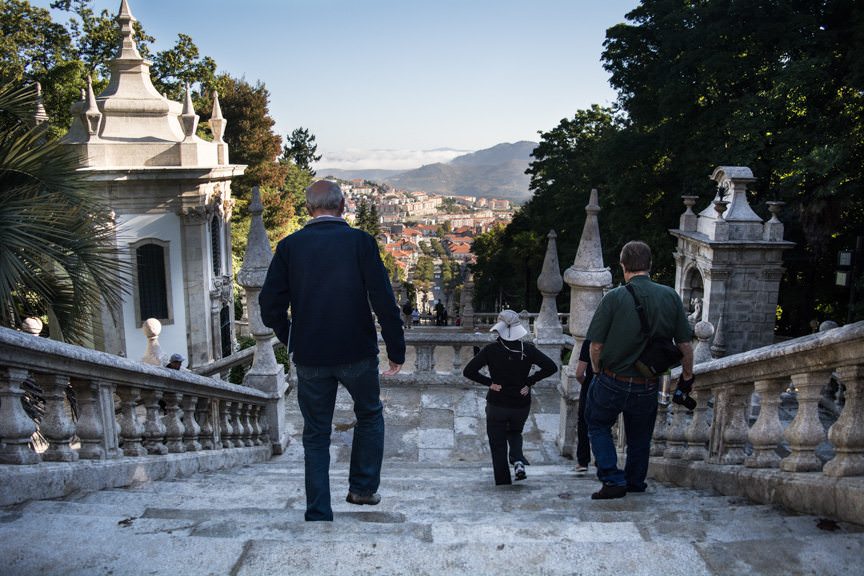 It’s our last morning onboard Viking River Cruises’ Viking Torgil on Portugal’s Douro River. Everyone onboard seems very aware of that fact – particularly those of us who have the privilege of being on a Lufthansa flight to Frankfurt tomorrow morning that will require us to transfer to Porto International Airport at the almost-hypothetical hour of 3:30 a.m.

Yes, that means alarms will be set for 2:30 a.m. and continental breakfast will be “enjoyed” at three in the morning before that pleasant cruise glow evaporates in a haze of airport check-in queues, security lines and boarding groups. Fly the friendly skies! 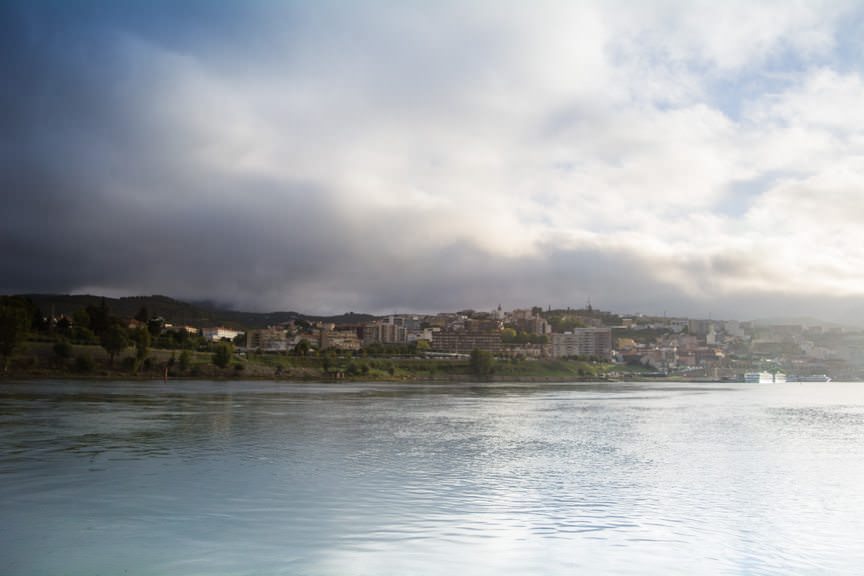 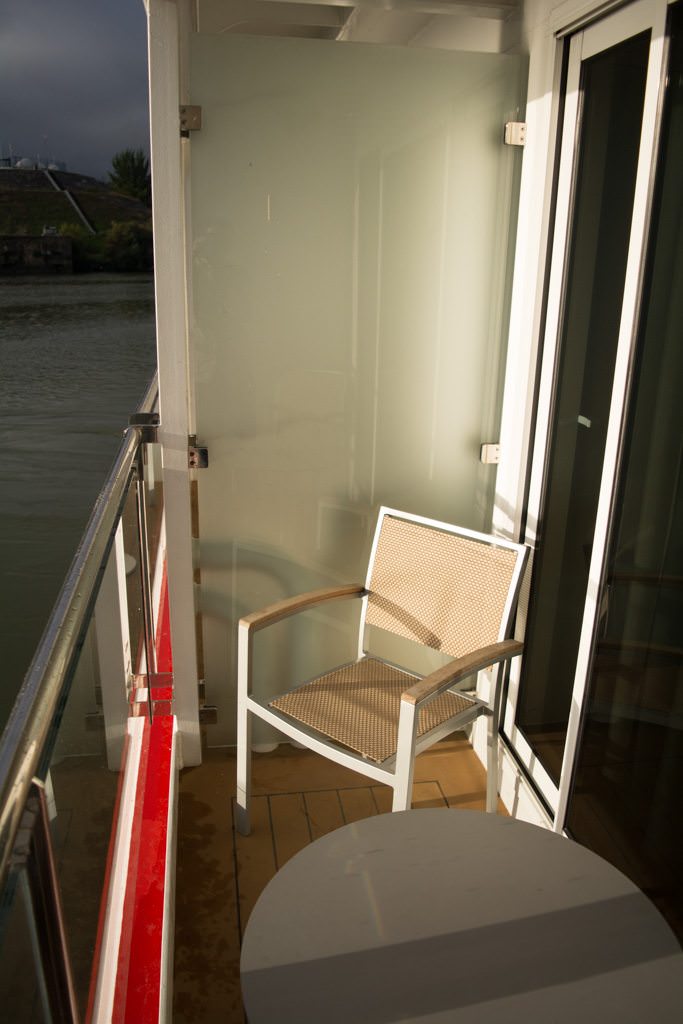 …from the balcony of my suite aboard Viking Torgil. Photo © 2015 Aaron Saunders

Today however, we’ve got one last shot at enjoying the fabulous product that Viking has present aboard the Viking Torgil, with an entire afternoon of cruising the scenic UNESCO World Heritage Site that is the Douro River Valley before our arrival in Porto this evening just after 7:00 p.m.

First, though – it’s time for another tour! Our morning destination: the small town of Lamego, Portugal, population 26,000. 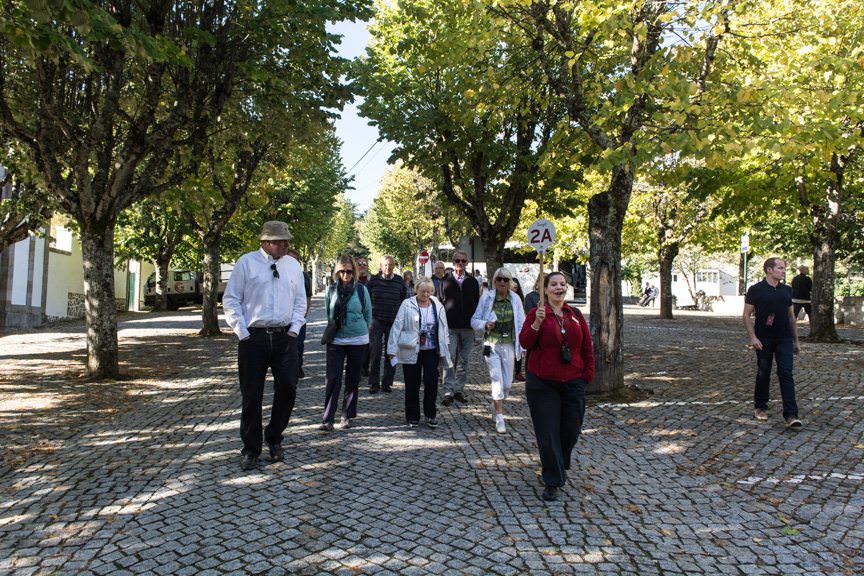 First founded during the Middle Ages, modern Lamego would still be mainly recognizable to those early inhabitants. The town castle dates back to the 5th century, and the Cathedral of Our Lady of the Assumption was constructed in 1129.

The landmark that we enjoyed a particularly scenic walk down is much “newer”, dating from 1750. Known as the Sanctuary of Our Lady of Remedios, this attractive Cathedral towers over the town of Lamego like, well, a King surveying his fiefdom. 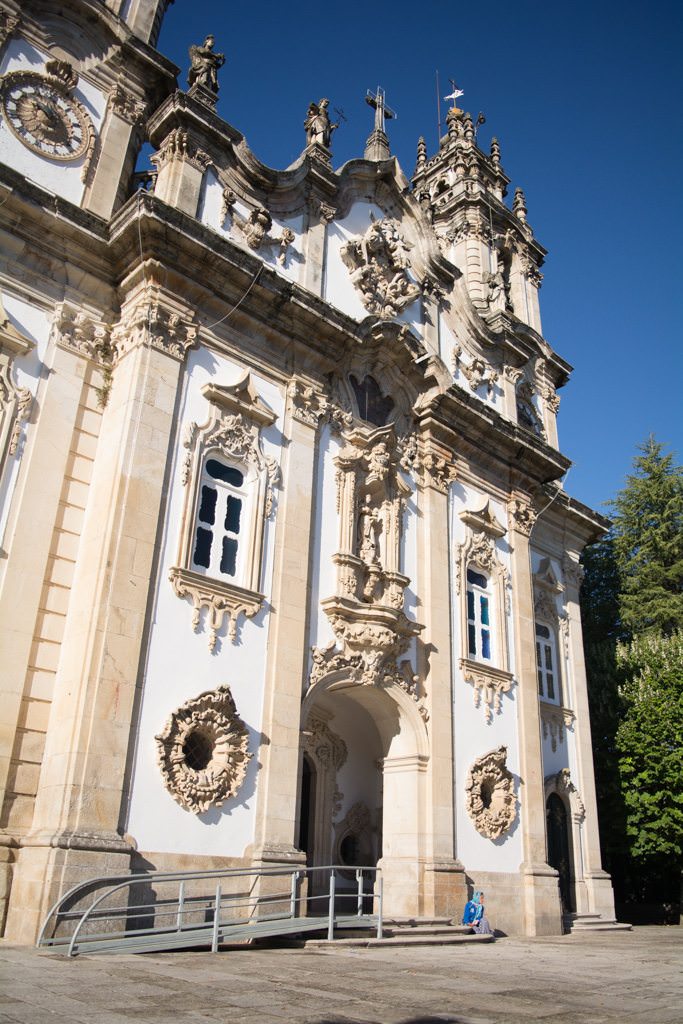 The Sanctuary of Our Lady of Remedios…Photo © 2015 Aaron Saunders 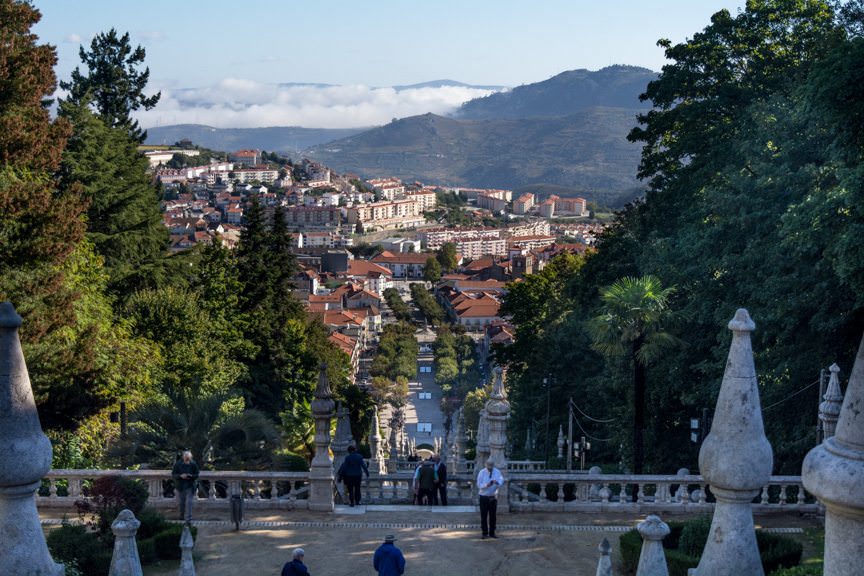 …is perched high above the town of Lamego. Photo © 2015 Aaron Saunders

Now, you could argue that the go-to remedy for most things in Portugal is port wine and lots of it, and you’d be right. But the Sanctuary of Our Lady of Remedios is considered particularly sacred here; apparently, women looking to get pregnant (or trying to get pregnant, perhaps) will ascend the six hundred-some steps that separate them from the Sanctuary – on their knees. 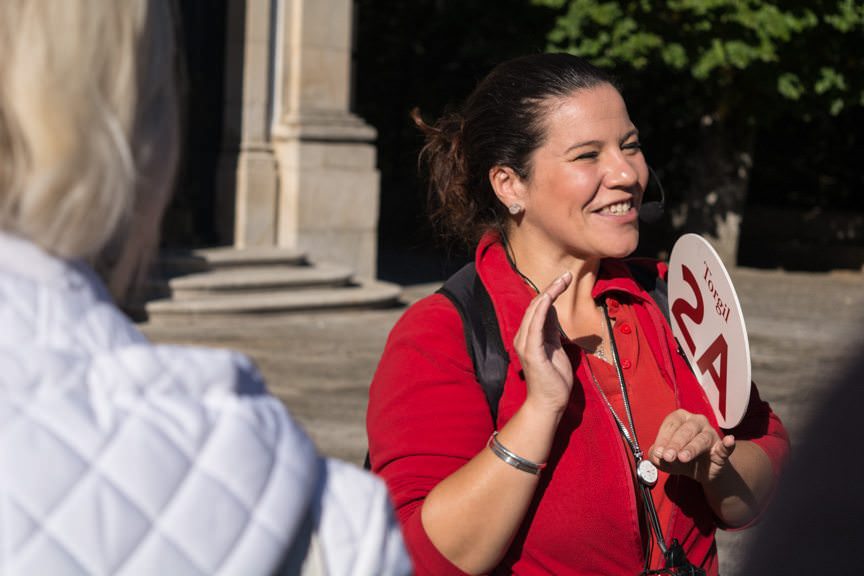 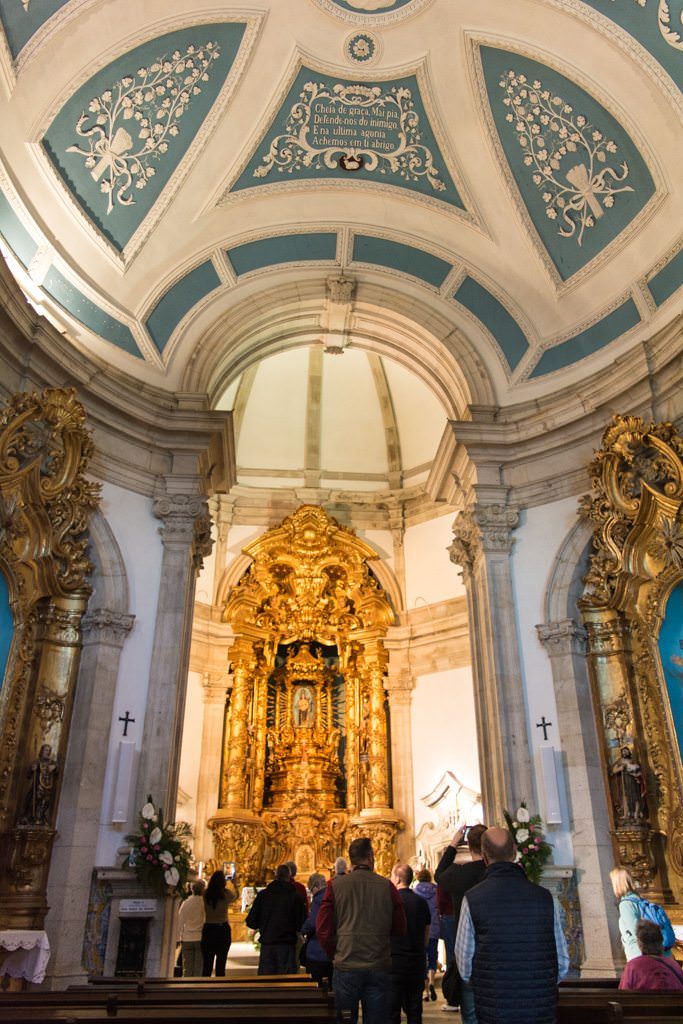 …before we’re set loose to tour the inside and make our way down the 600-some steps that separate us from Lamego! Photo © 2015 Aaron Saunders

I don’t know about ascending these steps on my knees; simply walking down them to the main town square at a leisurely pace took about 15 minutes. At most landings, elaborately painted Portuguese tiles are affixed to the buttresses that line the winged staircases. The contractors must have spent a bit more cash on the tiles than they wanted to: some staircases are missing their tiles, and eventually, each staircase leads onto a dirt landing that can get quite muddy. 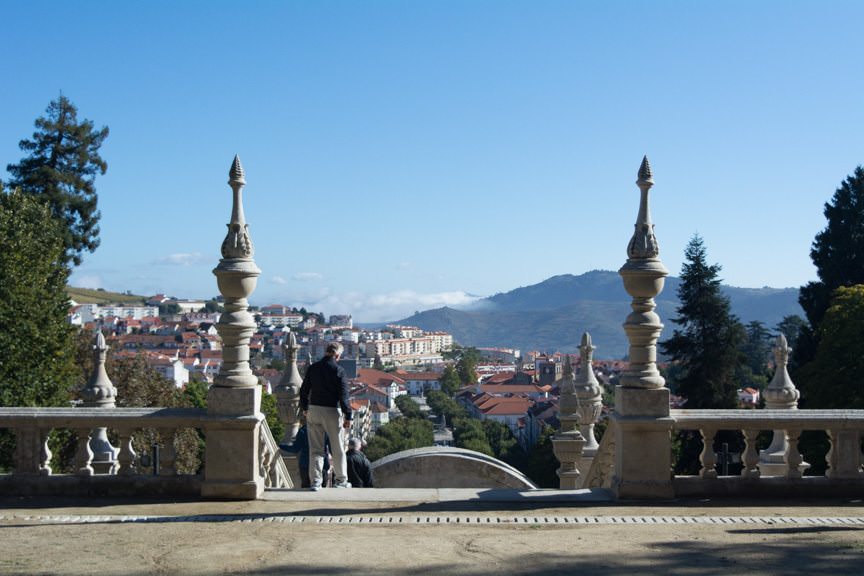 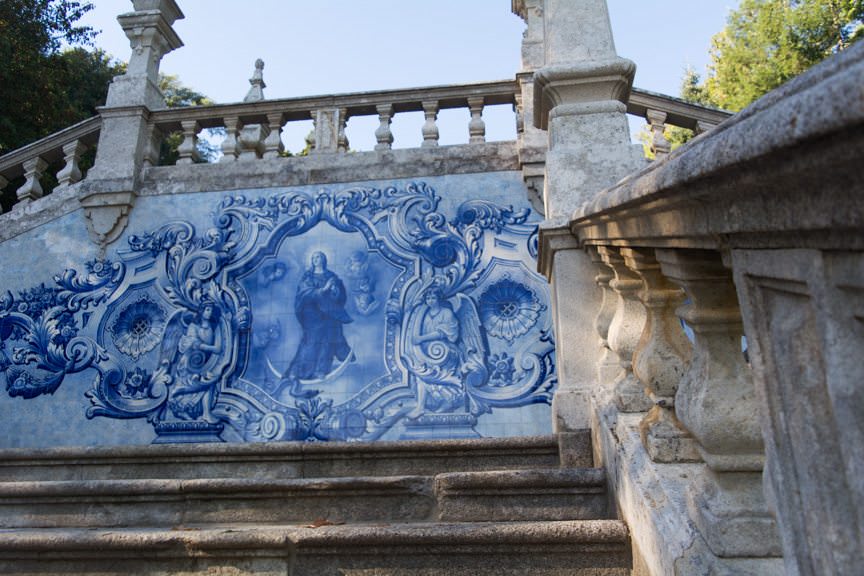 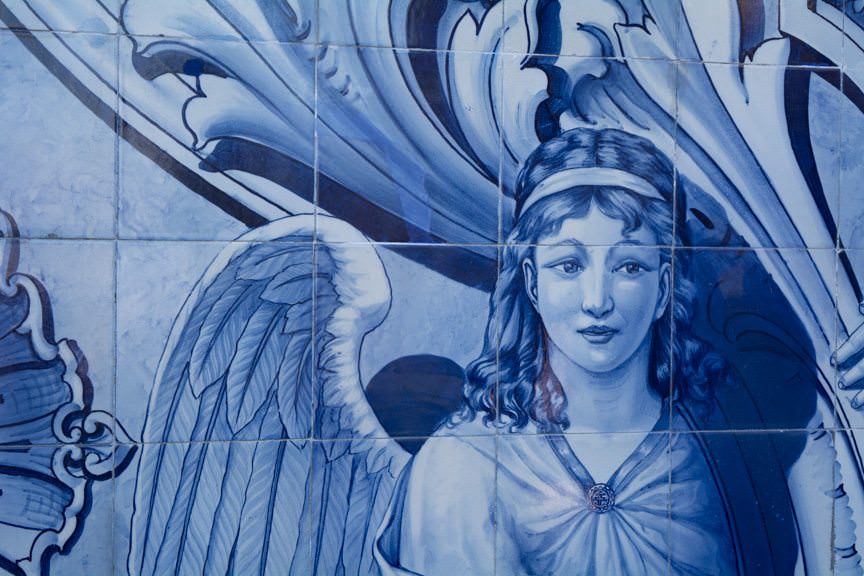 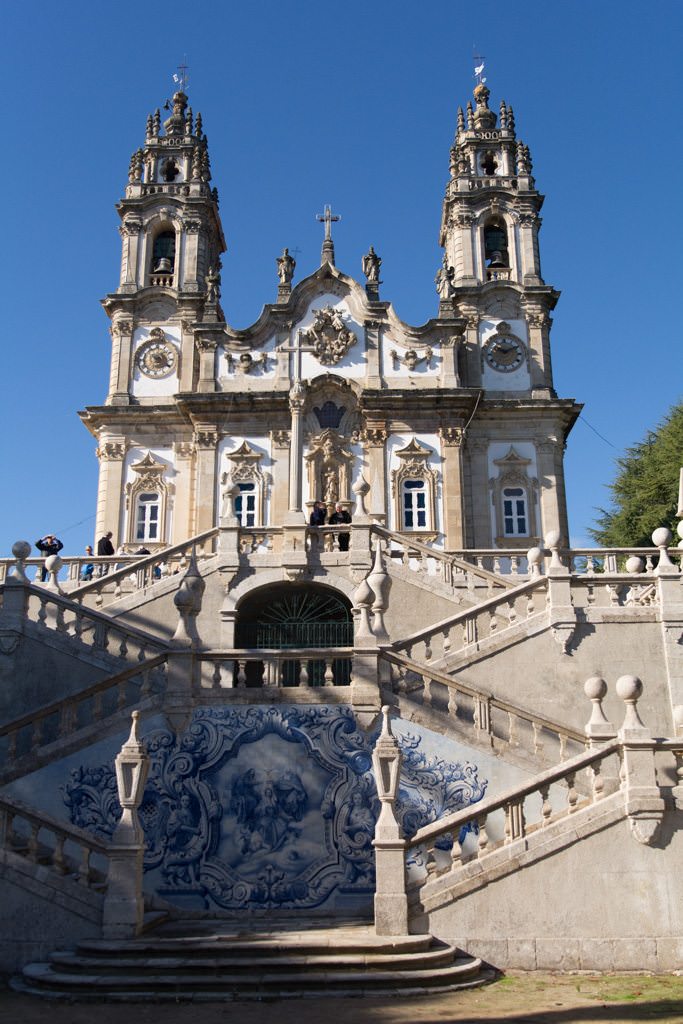 So, Our Lady of Cost Overruns might have had something to do with that, but the experience of descending to the town’s main square is an awesome one. Always mindful of the varying activity levels of their guests, Viking provided the option to join the motorcoach for a scenic drive down to the main town for some free time rather than descend the staircase. I’d estimate roughly half of our coach (the Amazing Bus) took the stairs; the other half elected to stay with the coach.

After some free time in the town of Lamego, it was time to board the Viking Torgil for one last time as we sailed down the Douro for Porto. 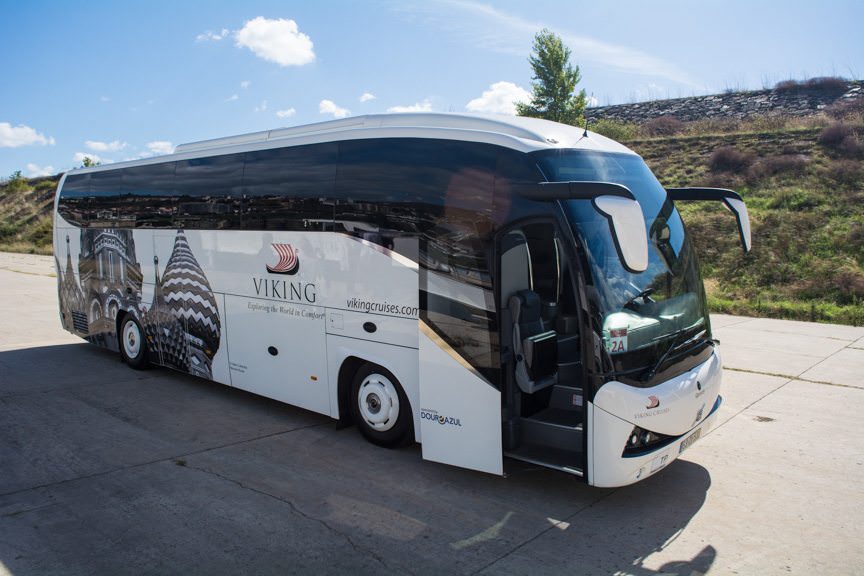 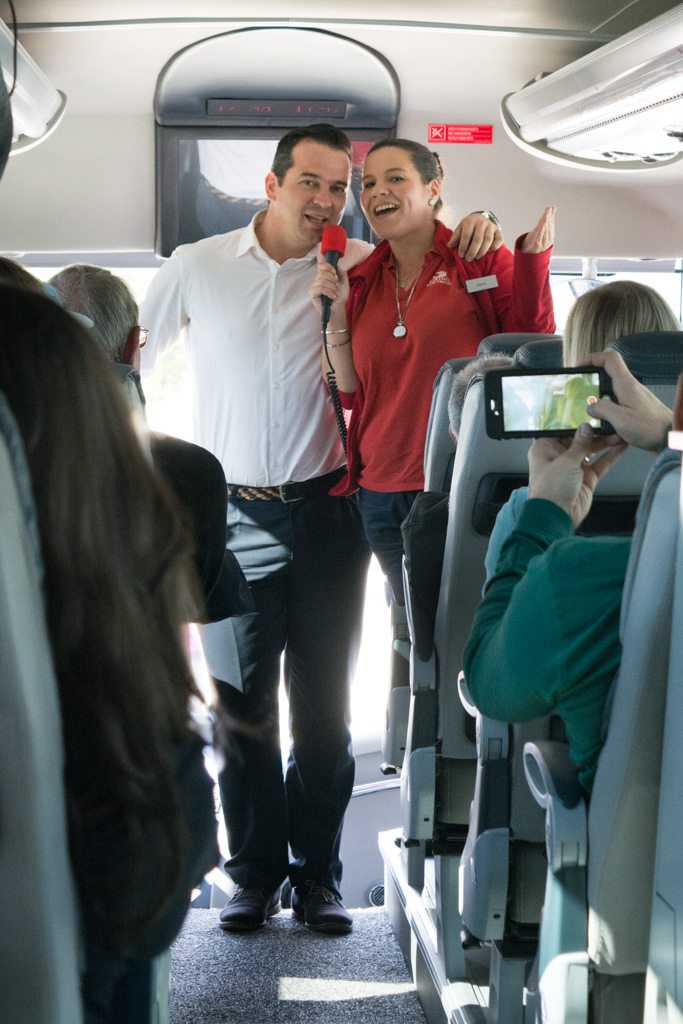 Our driver Vladimiro (Jessica) and guide Maria sang to us! Photo © 2015 Aaron Saunders

While we spent an enjoyable afternoon sailing the Douro, it got me thinking about how this river compares to other rivers in Europe, like the Rhine or the Danube, and what you need to know about the Douro before you go. 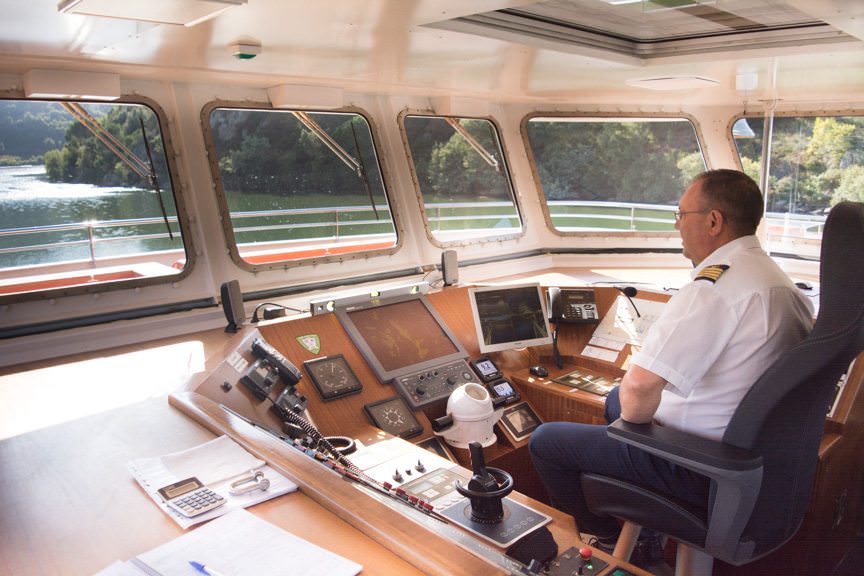 Our Captain in the wheelhouse of the Viking Torgil. By law, ships on the Douro are not allowed to sail at night. Photo © 2015 Aaron Saunders

For me, one of the primary joys of cruising of any kind is sailing through the night and waking up the next morning to stand on your balcony as a new destination comes into view. On the Danube and the Rhine, that’s typically what happens, as you trade one locale for another overnight.

Not that you’d have to, anyway: the distances that need to be covered on the Douro are remarkably small; Lamego to Porto, for example, is just 134 kilometres (83 miles) away – and that’s the longest single stretch of distance we’ve had to cover on this entire voyage. To put that in perspective, a Viking Longship sailing from Nuremberg to Budapest has to cover nearly 800 kilometres (497 miles) in a single week! 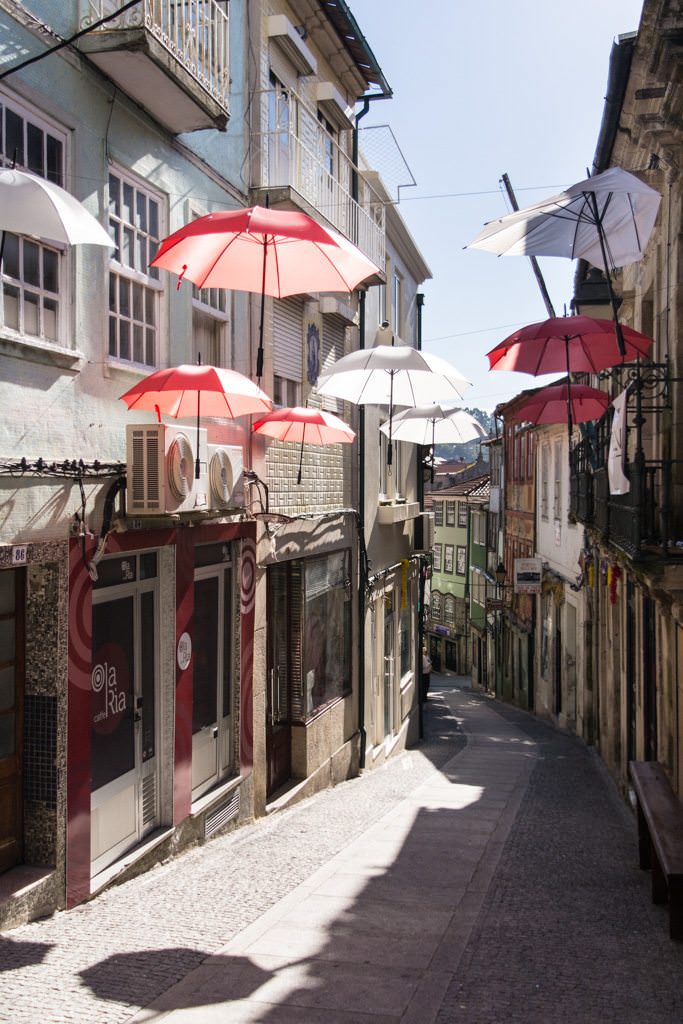 Are you expecting each town to be a mecca of culture and shopping? Get ready for a surprise: once you leave Lisbon (and, arguably Porto) behind, you’re leaving all of the standard tourist-trappings as well.

On the plus side, that means that what you do buy will likely be more authentic than, say, chocolaty Mozart Balls in Vienna. On the downside, it also means that most of the towns you dock in are less impressive on the whole. Many aren’t more than a few streets here and there, and a handful of shops – hence the reason Viking’s excursions tend to take you to more inland locations.

However, taken for what they are, each town offers its own unique charms and values. Just don’t expect them to be Vienna.

Expect To Get To Know Your Coach 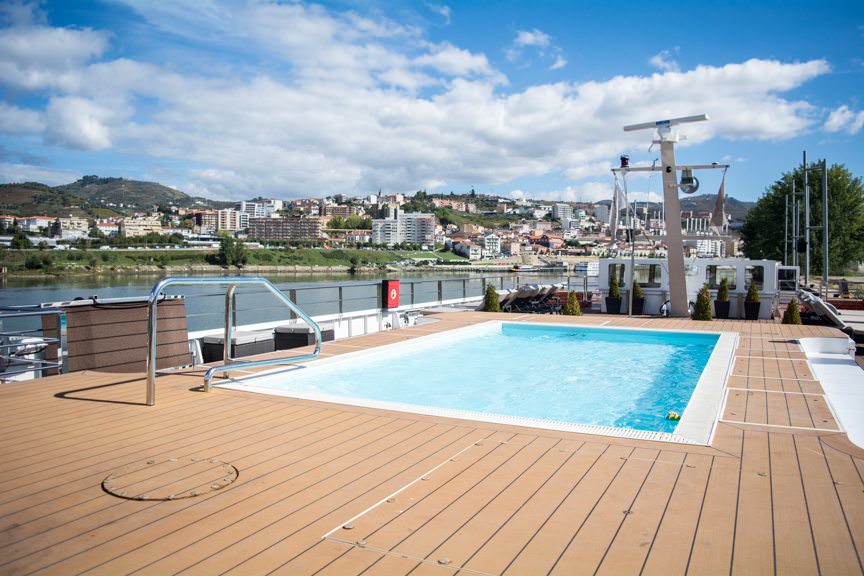 Unlike Danube river cruises, which typically dock in or near the town center, the towns themselves are usually not the main draw on these Douro voyages. Wineries play a huge role in tours here, so expect to be bussed further afar to take advantage of all the different tasting opportunities that will be presented.

In fact, there are fewer walking tours here than on standard Danube voyages – but that doesn’t mean these excursions aren’t good. Far from it. In fact, I’d say the excursions in Portugal and Spain are, on the whole, more elaborate than their standard river cruising counterparts, with more included lunches, tastings, tours and other exclusive events than on other river cruise journeys. 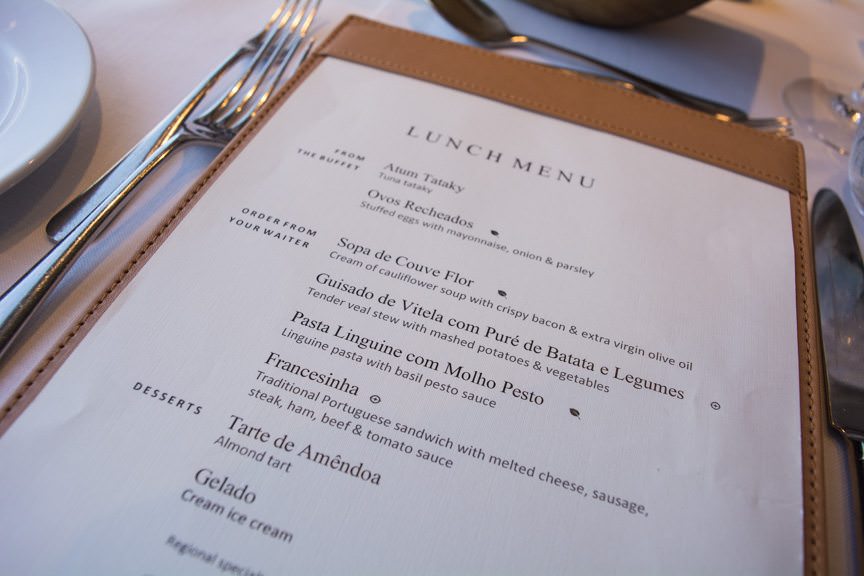 In many ways, I liken this voyage along the Douro to my trip with Viking through the Bordeaux Region of France last year. Viking has put just as much thought into their Douro itineraries as they did into their Bordeaux product: menus feature Portuguese specialties daily, and are actually written in Portuguese with English descriptions below. Wines are Portuguese. Local spirits are served alongside more standard imports. And of course, port wine flows like nectar.

That’s not to say that Danube and Rhine journeys are not culturally immersive; they are. But on a weeklong trip down the Danube, you might visit between three and four countries. Simply put, there just isn’t the time to dive as deep into the cultural differences and specialties on your average Danube cruise as there is here in Portugal, where 98 percent of the itinerary is Portuguese. 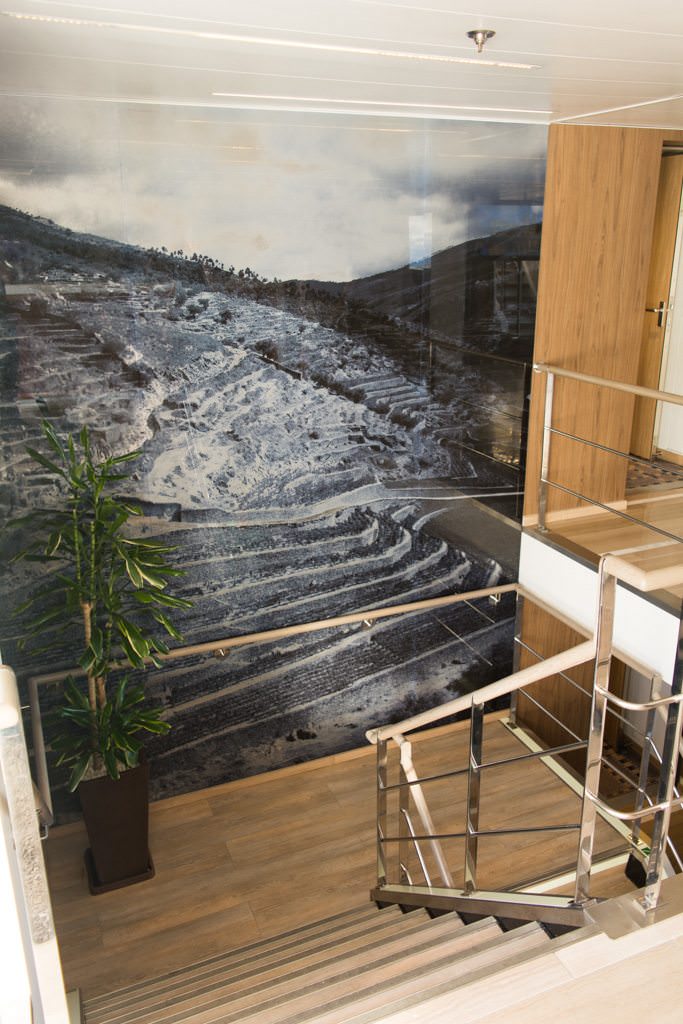 Even onboard the Viking Torgil, the Douro River Valley is never out of sight. Shown here is the main staircase aboard Viking Torgil, looking down from Deck 3. Photo © 2015 Aaron Saunders

I always like to think the litmus test for any good cruise can be determined by answering a single question: would you do this itinerary again? And for me, that answer is yes. Viking offers an uncommonly good product aboard Viking Hemming, Viking Torgil, and soon, Viking Osfrid, which will make her debut on the Douro next spring.

I feel like there is plenty of repeatability in this itinerary, which operates right up until Christmas Day this year and resumes again next March. There is so much history and information to take in on your first visit that it’s almost overwhelming; I’ve had to arm myself with guide books for the entire duration of this trip just to make myself sound remotely knowledgeable. 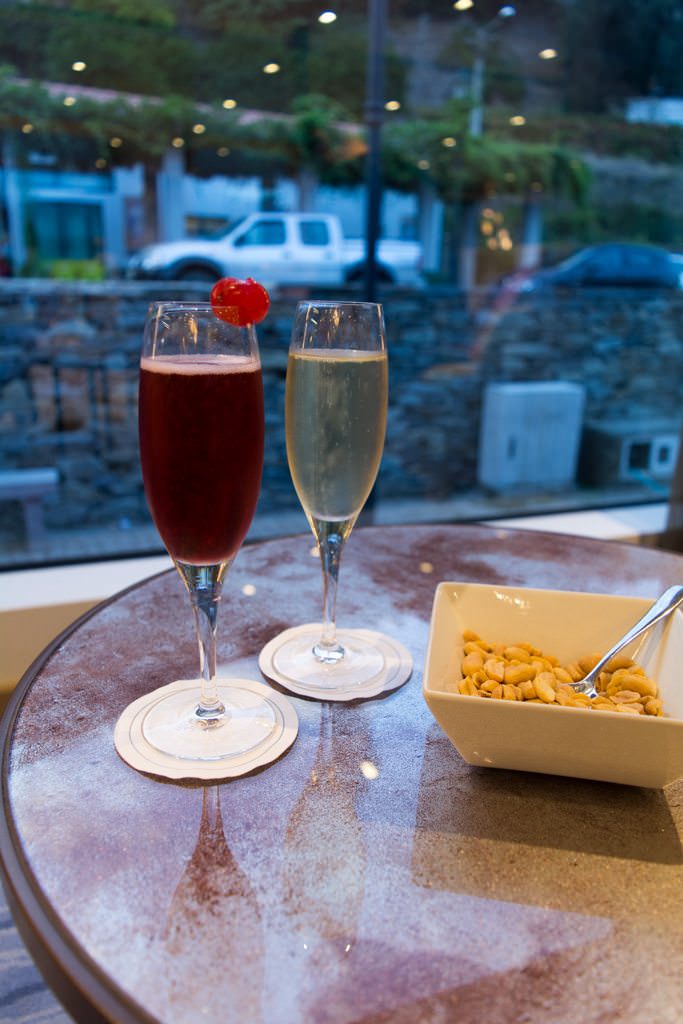 In the end, though, I’d take this river cruise again because of the people: the staff and crew of the Viking Torgil were exactly what I’ve come to expect of Viking. They’re smart, funny, and most importantly, friendly.

Viking’s motto is, Exploring the World in Comfort. I like it. But I think they should add, “with friends” to the end. 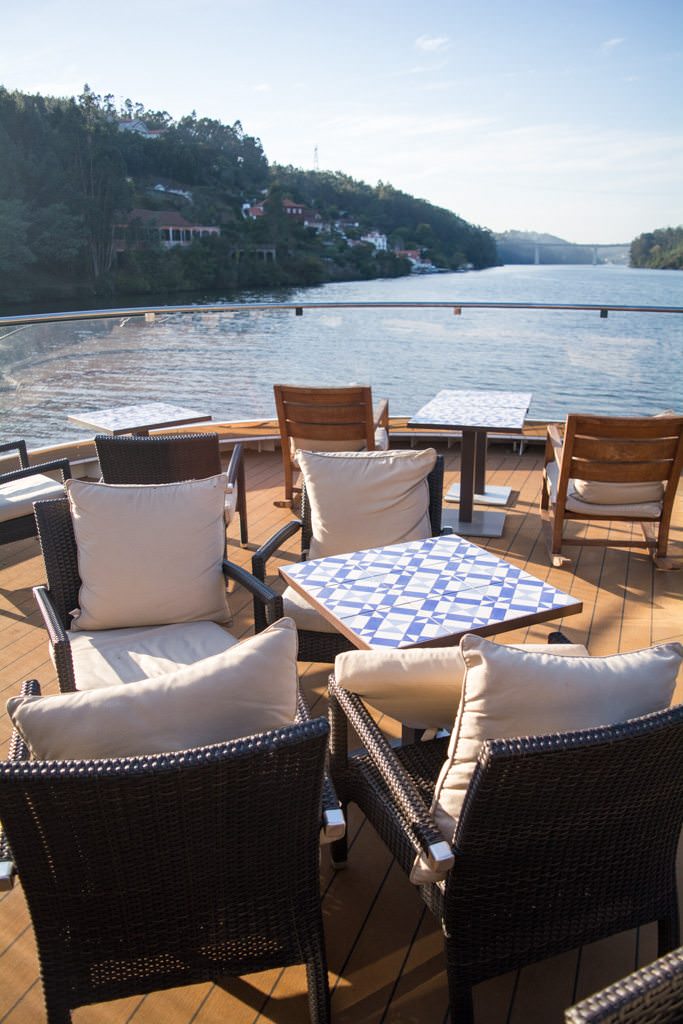 Goodbye from the Douro, #VikingSocial and the Viking Torgil! Photo © 2015 Aaron Saunders

Our Live Voyage Report from onboard Viking River Cruises’ Viking Torgil has sadly come to a close, but stay tuned for a full Voyage Recap and a deck-by-deck photo tour of the Viking Torgil! Be sure to follow along with our adventures on Twitter @deckchairblog.