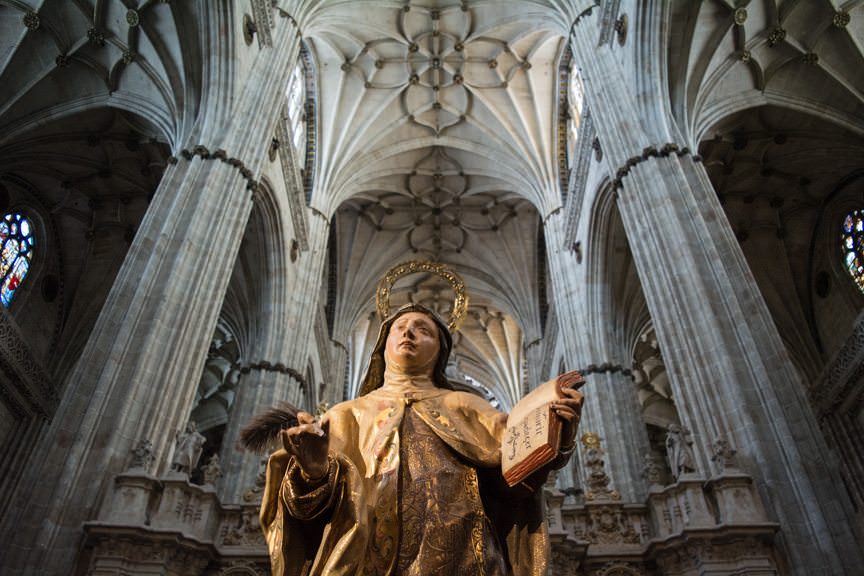 Today is a very noteworthy day onboard Viking River Cruises’ 10-day Portugal’s River of Gold itinerary that we find ourselves currently enjoying. While our cruise aboard the 106-guest Viking Torgil focuses primarily on Portugal’s Douro River Valley, today is the day that guests are invited to journey further after – to the historic city of Salamanca, Spain. 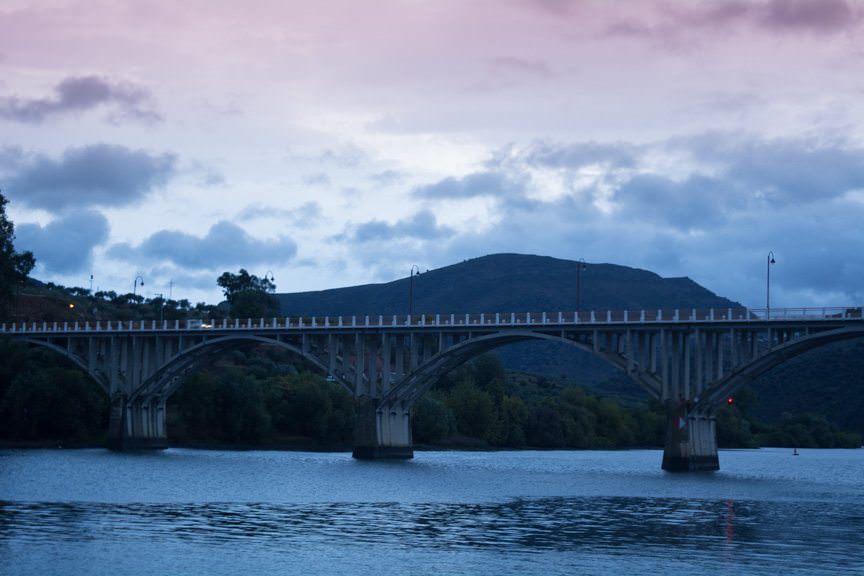 Sunrise this morning, as seen from our docking location. It would set the stage for a fantastic full-day tour into Spain. Photo © 2015 Aaron Saunders

A UNESCO World Heritage Site, Salamanca is nestled within the Iberian countryside roughly 2.5 hours away from our current docking location. I think it is particularly noteworthy that our full-day tour (which runs from 8:30 a.m. to 6:15 p.m.) is provided complimentary. Think about the cost of running three coaches all day – fuel, wages, permits and parking – and you’ll realize that if you were going to do this on your own it would cost you hundreds of Euros per person. Aboard Viking Torgil, it’s entirely free of charge. 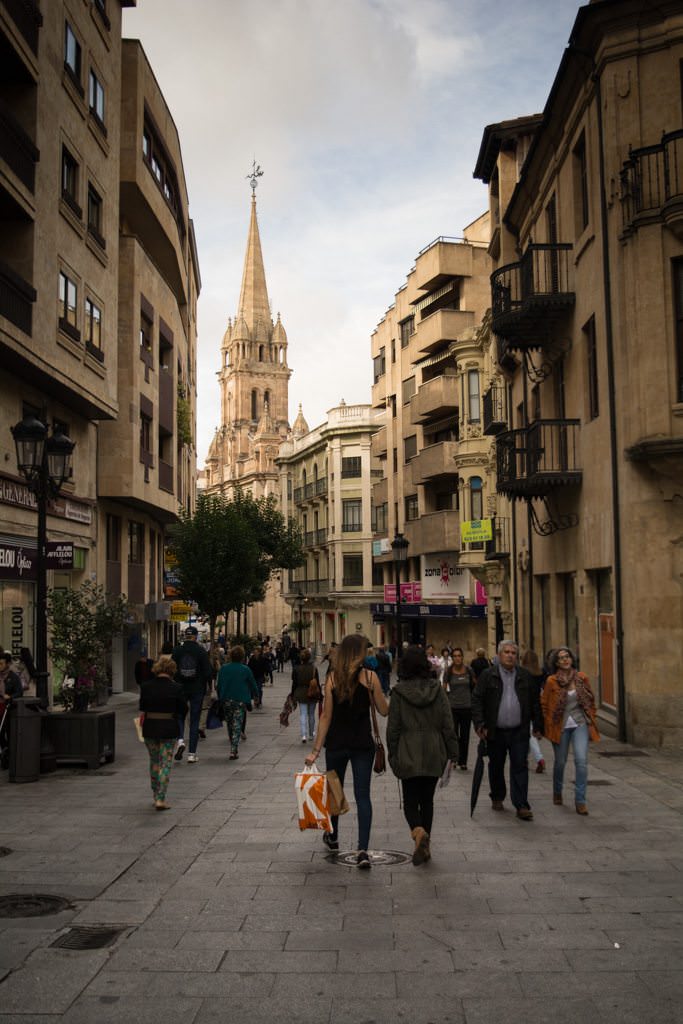 And yet, I was surprised when I boarded the coach this morning that it wasn’t as full as it has been. Some people were put off by the duration of time on the coach (five hours in total), but the choice was entirely theirs to either participate in the excursion or stay aboard the ship. Viking doesn’t pressure you into doing anything you don’t want to; guests are told when coaches will be departing, and if you haven’t collected your boarding pass from Reception on Deck 3 and boarded the bus at the given time, staff will assume you’ve elected to stay with the ship.

They’re also honest, freely admitting that there wasn’t much to do in our port of call of Vega de Terron, Spain, which is little more than a service docking location.

Salamanca is a striking blend of old and new – and even abandoned buildings have a certain artistic charm to them. Photo © 2015 Aaron Saunders

I, however, wasn’t passing up the chance to see this historic Spanish city. At 8:30 a.m., I boarded the Amazing Bus (Coach A) once again, where Maria and our driver “Jessica” (whose real name is Vladimiro) and settled in for the drive to Salamanca.

Here’s the lowdown on the drive: yes, it’s 2.5 hours long. My advice: deal with it. I know that sounds harsh, but let’s face it, most people would give their left arm to visit Salamanca. Enduring a long ride in a luxury Volvo coach seems like an odd thing to complain about – and I dislike coach journeys with a passion. However, I’ve found a way to deal with them: I bring my iPod, load up some music I enjoy, and watch the landscape pass. Sleep also appeared to be a popular option! 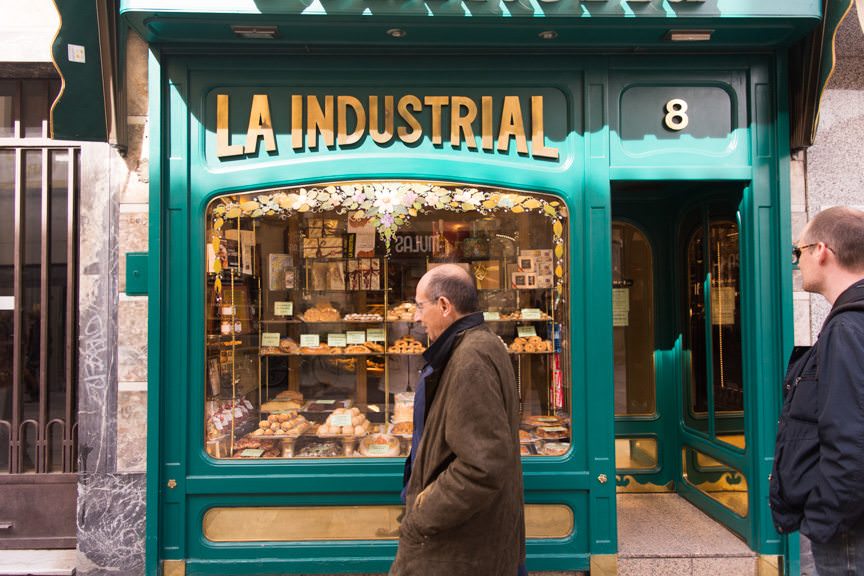 Before long, we were stepping off the coach in Salamanca. Because of the Spanish penchant for siesta, our day started with three full hours of free time before our scheduled lunch back at a local hotel. Following lunch, guests would be taken on a guided walking tour of Salamanca – or, elect to have more free time, which is what I did, meeting the coach at the appointed time of 4:00 p.m. 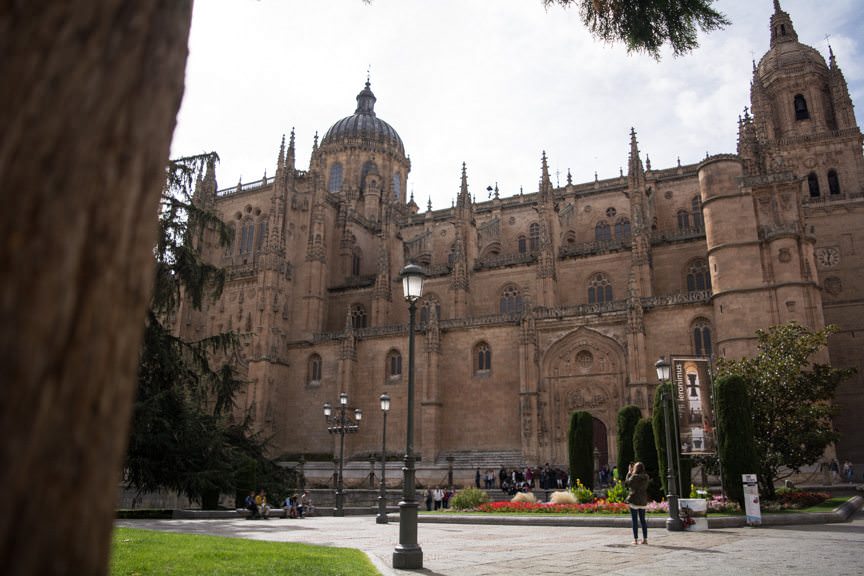 So what can you do in Salamanca? For starters, the “cathedrals” are a must-see. Catedral Veija (Old Cathedral) and Catedral Nueva (New Cathedral) are located just south of Plaza Mayor, in Plaza Juan XXIII, and are actually connected to one another. In fact, the only way to enter the Old Cathedral is by way of the New Cathedral. Of course, this is Europe: Catedral Nueva was built between 1513 and 1733.

The New Cathedral, in pictures: 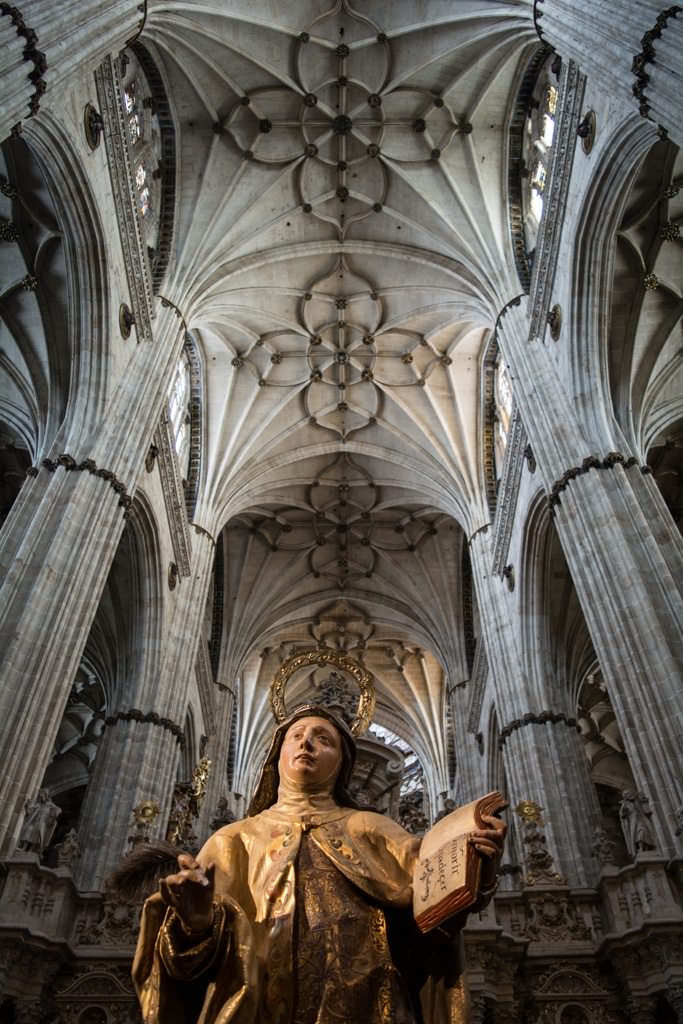 Inside, the New Cathedral of Salamanca is an imposing giant of a structure; as immense in scale as it is beautiful. Photo © 2015 Aaron Saunders 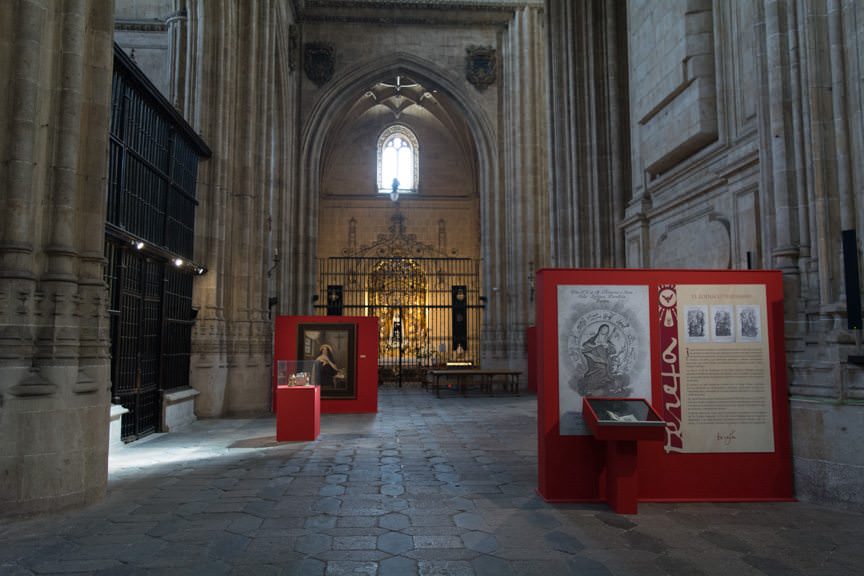 Exhibits with artifacts are scattered throughout the cathedral, and a hand-held headset provides interpretation in a variety of languages. Photo © 2015 Aaron Saunders 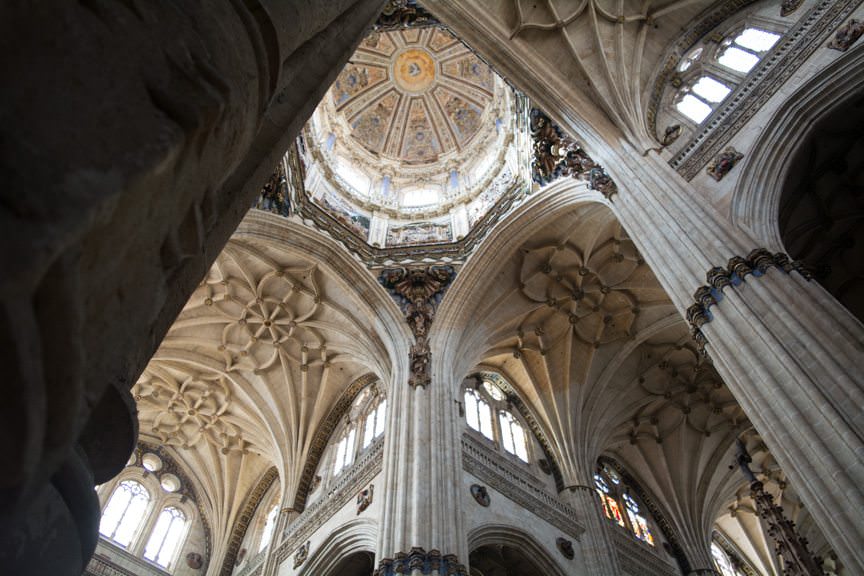 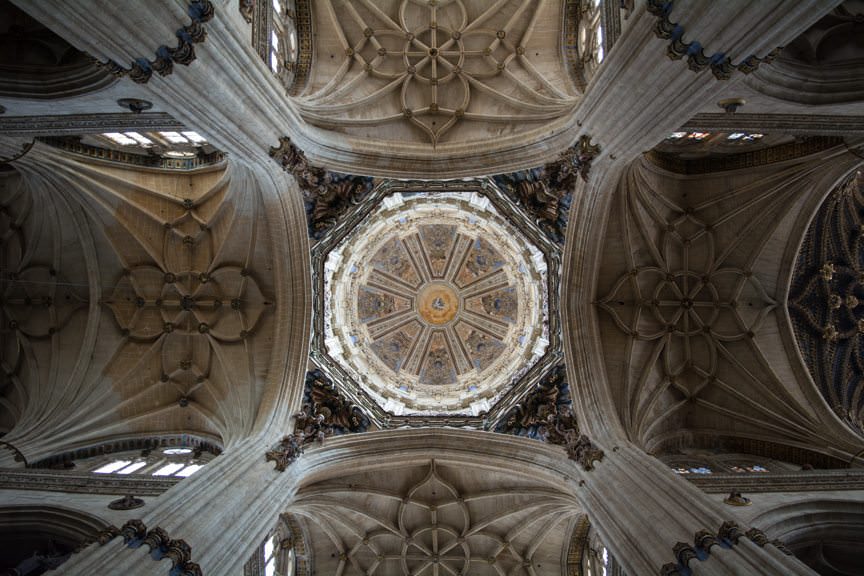 You might think after seeing the New Cathedral that the Old Cathedral would be a disappointment, but Catedral Veija is even more spectacular. Built prior to the 1100’s, the cathedral runs the gamut in terms of architectural styles, from Gothic to Renaissance to Byzantine depending on the century of construction. It’s also impressively sprawling, with a variety of anterooms, chambers and hallways jutting off from the main cathedral. There are also 53 detailed murals from the 15th century that are impeccable.

One entrance fee gives you an audio handset and admission to both cathedrals. At €4.75 for an adult admission, it’s a great deal. Guests were encourage to enter the cathedral on their free time, as the afternoon walking tour would view the exterior, but not the interiors, of both cathedrals. 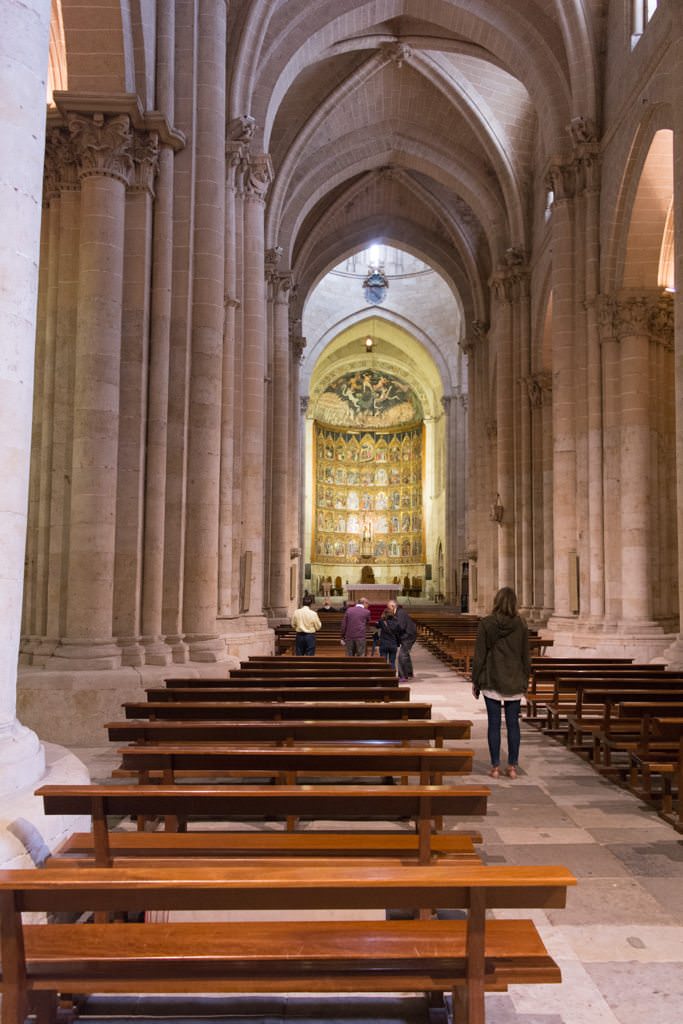 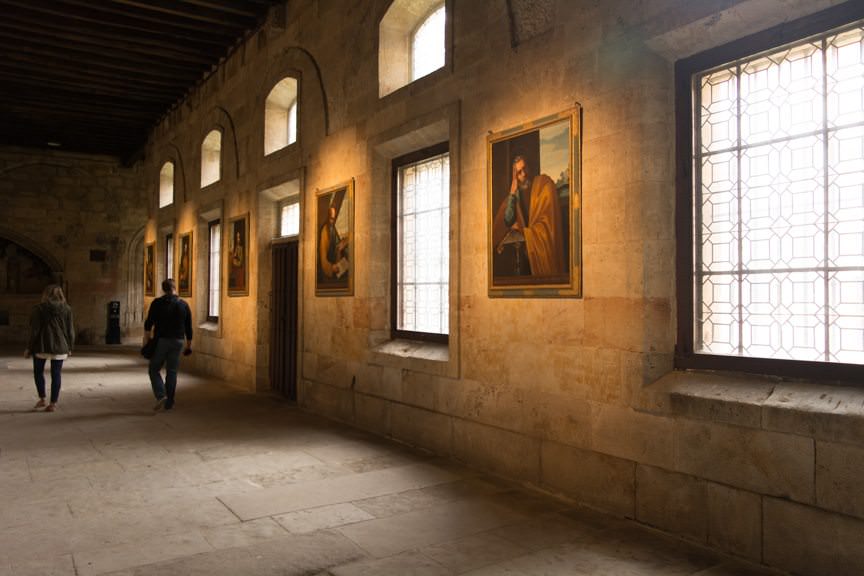 …until you discover its sprawling network of passageways and anterooms. Photo © 2015 Aaron Saunders 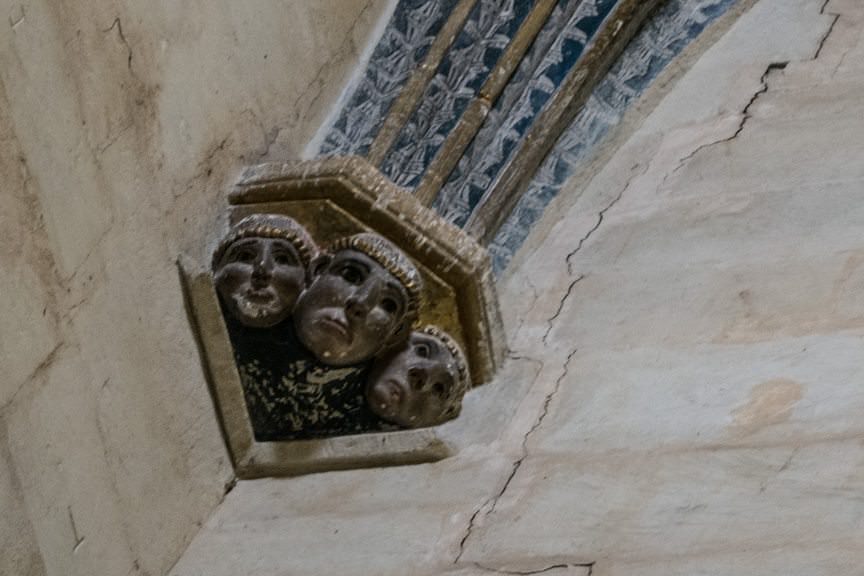 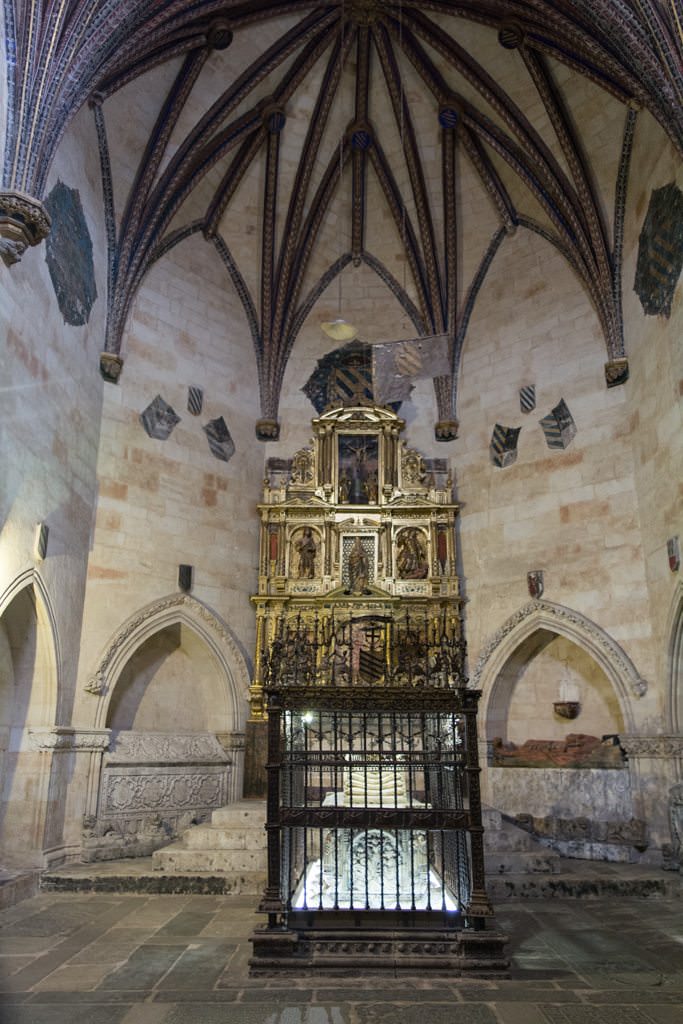 Aside from shopping (which will play a large role in your Salamanca experience, no doubt!), Plaza Mayor is another must-see. Architecturally stunning and somewhat reminiscent of Piazza San Marco in Venice, Plaza Mayor was designed by Alberto Churriguera and constructed over a 26-year period between 1729 and 1755.

Plaza Mayor today hosts a wide array of cafes and restaurants that all feature outdoor seating which is ideal for people-watching in this bustling space. In fact, coffee and a pastry in this square is almost an absolute-must, if only for the atmosphere that the Plaza exudes. This is the social hub of old Salamanca, and tourists and locals alike flock here.

Some more photographs of our time in Salamanca: 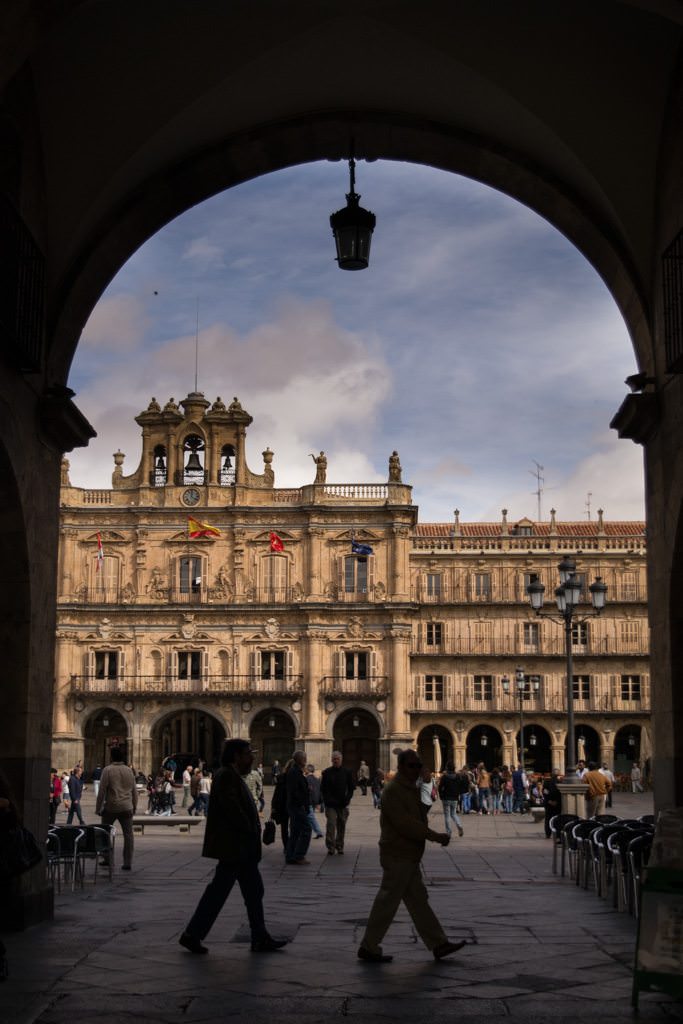 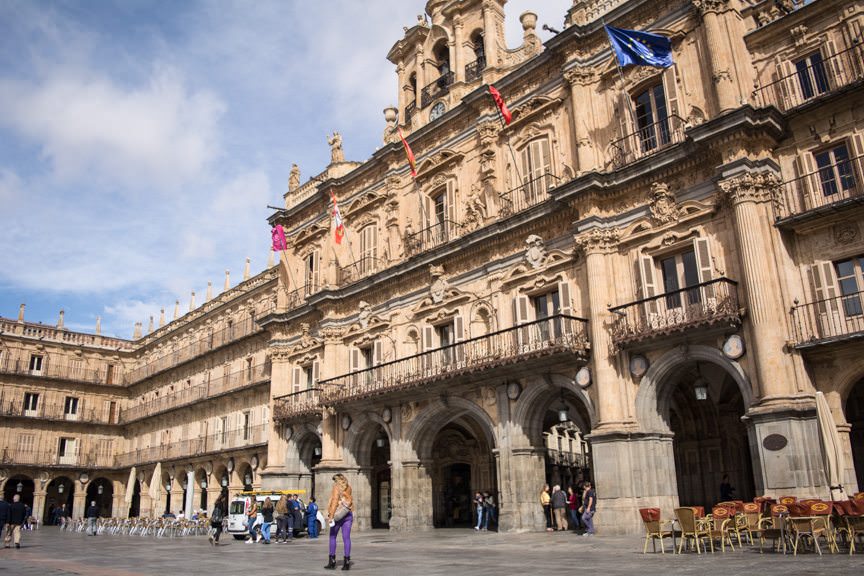 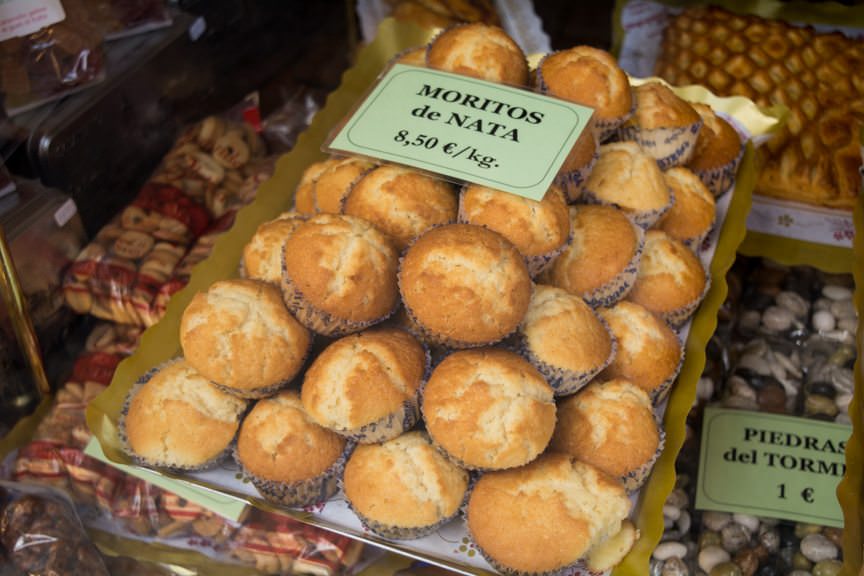 Coupled with a delicious lunch at a local hotel (seafood paella!), this was one of the highlights of our 10-night journey that began in Lisbon nearly a week ago. I’d highly recommend participating in this spectacular full-day excursion that Viking clearly put a lot of time and effort into arranging.

With the torrential rain pelting against the windows of the motorcoach as we returned to the Viking Torgil, and exhausted after a day of touring (river cruising is such hard work), I drifted off to sleep on the coach. 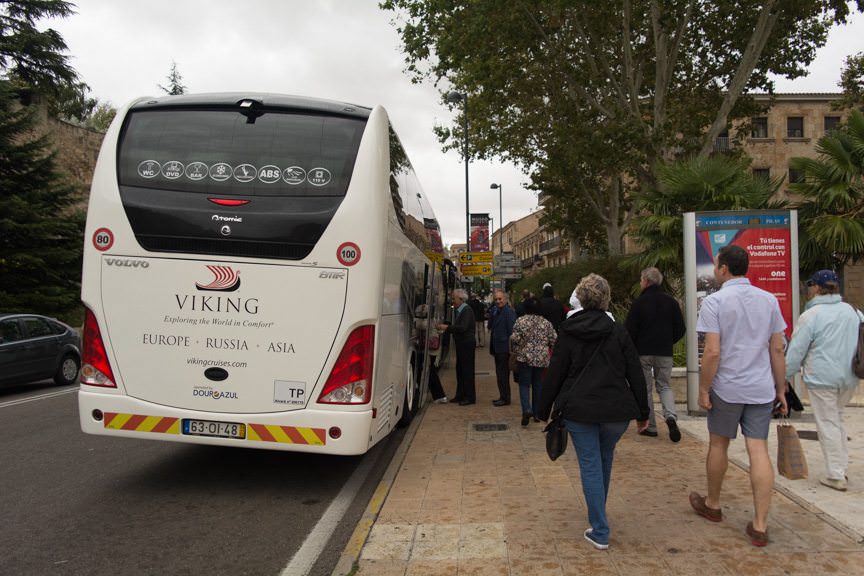 Returning to the coach…Photo © 2015 Aaron Saunders 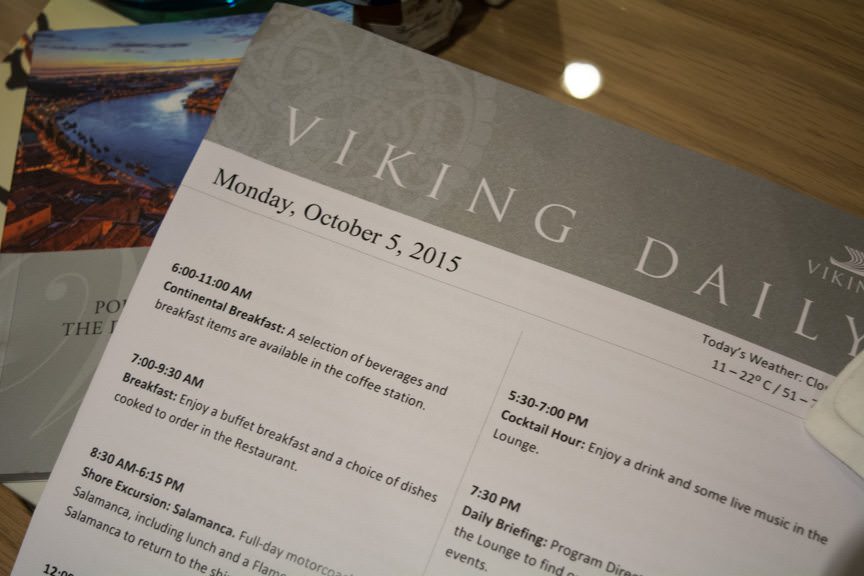 …and an evening of activities aboard Viking Torgil. Photo © 2015 Aaron Saunders

Some guests passed Salamanca up. They didn’t want to take the coach. They didn’t want to be on the bus for two hours. I think they missed out. Salamanca’s reputation as a beautiful and breathtaking city proceeded it, and did not disappoint. After all, you only get one shot at this thing called life – and who’s to say when or if we’ll be back?

So forget sleep – you can do that on the coach. Push yourself to the limits. See all that you can, while you can. It’s to Viking’s credit that they’re offering you almost more than you can take in. Seize it all with outstretched arms. That’s the spirit of a true Viking.

Our Live Voyage Report from onboard Viking River Cruises’ Viking Torgil continues tomorrow as we visit Pinhao – and the Portuguese Mr. Bean!! Be sure to follow along with our adventures on Twitter @deckchairblog.