Castles, Cocktails and Cruising the Douro 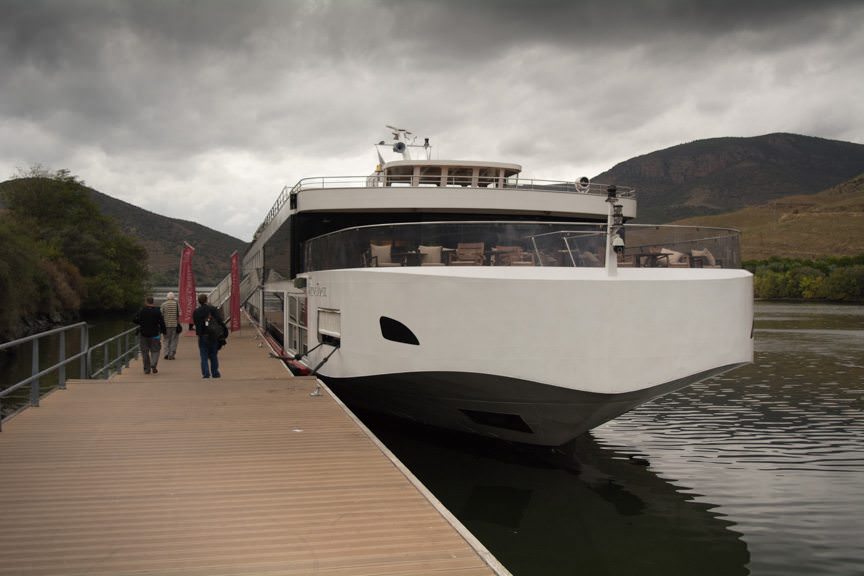 Our 10-day Portugal’s River of Gold itinerary aboard Viking River Cruises’ Viking Torgil entered Day 6 with guests enjoying a relaxing morning of sailing Portugal’s Douro River before disembarking in the early afternoon for a half-day tour of Castelo Rodrigo.

If there’s one complaint I have about river cruising, it is that it doesn’t include the “Day at Sea” that has become standard on many deep ocean cruise itineraries. In fact, I tend to shy away from port-heavy itineraries simply because, at a certain point, you tend to get burned out on runs that feature extended port calls every single day of the voyage. It’s nice to kick back and enjoy the ship too. 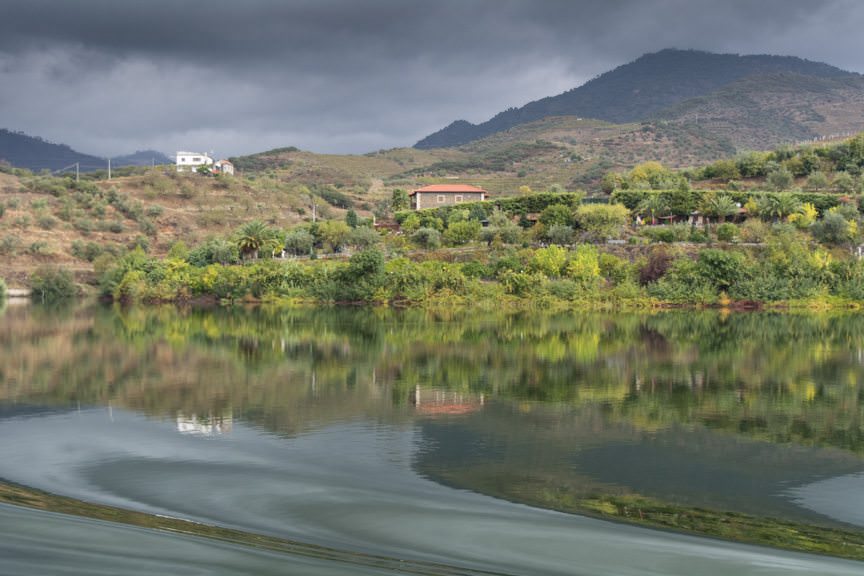 From the Deck Chair: the view from the Douro this morning. Photo © 2015 Aaron Saunders 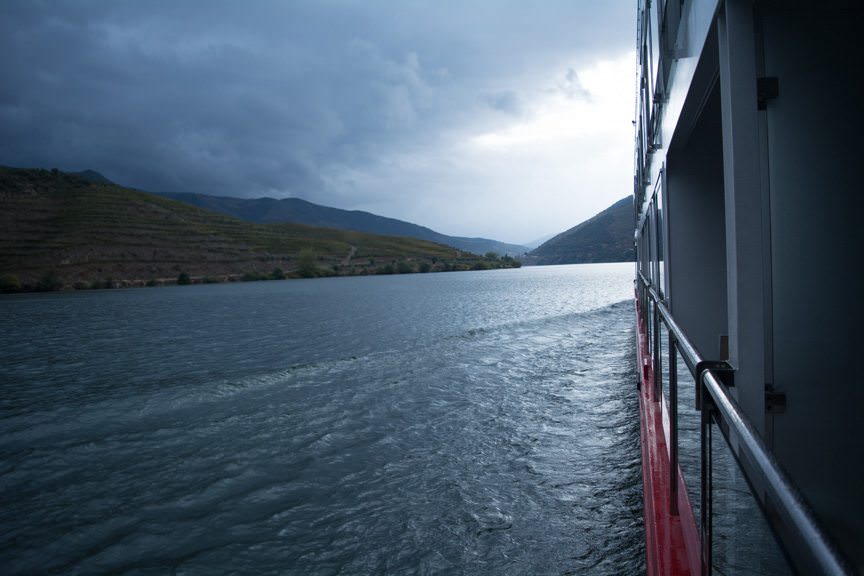 That’s why our morning of scenic cruising along the fabulous Douro River appealed to me so much: it offers the chance to relax, enjoy the ship, and appreciate the scenery – all rolled into one.

In that vein, I enjoyed a late breakfast taken at 9:00 a.m. in The Restaurant on Deck 2. Breakfast is one of my favorite mealtimes on any Viking ship, and here in Portugal things are almost as good as they are on the Viking Longships that ply the River Danube. 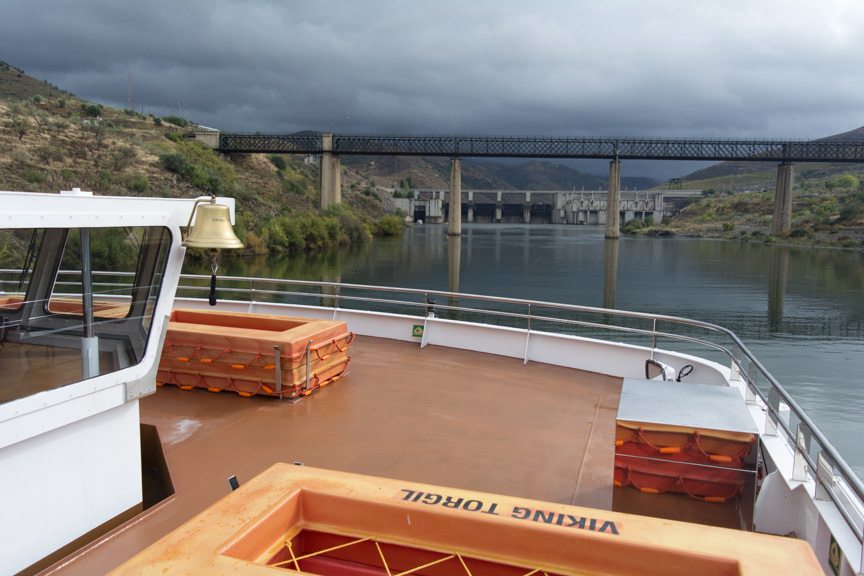 To start with, there’s homemade fruit yogurt. Bread made fresh daily. A variety of fruits, cheeses and cold-cuts. And, of course, hot foods like sausage, bacon, hashbrowns, and eggs cooked-to-order.

Once breakfast was finished, I wandered up on-deck in time to see us transit our first daytime (well, before 8:00 a.m.!) lock of the trip. If you’ve been on the Danube before, you’ll know the drill: ship goes in, lock gates close, lock is filled with water, ship rises, lock gates open, ship sails out. Still, I never tire of seeing this impressive feat of maritime engineering: 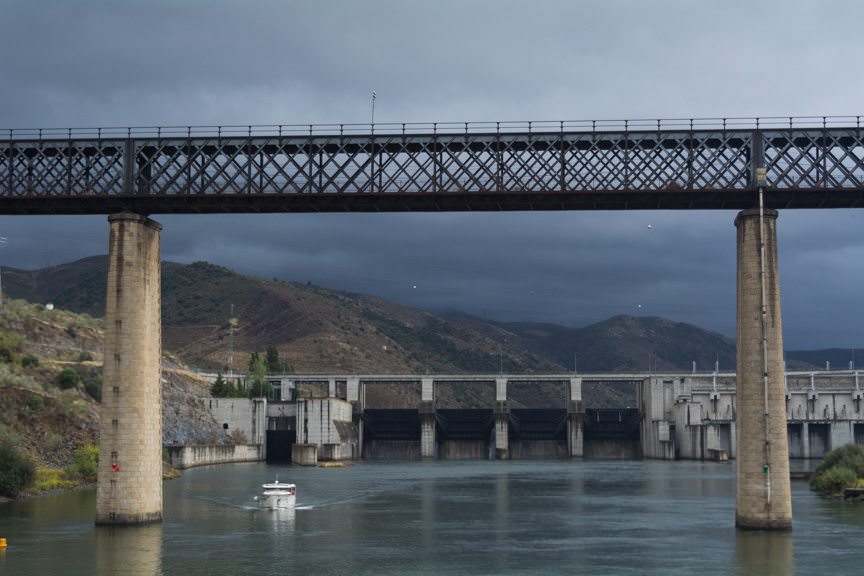 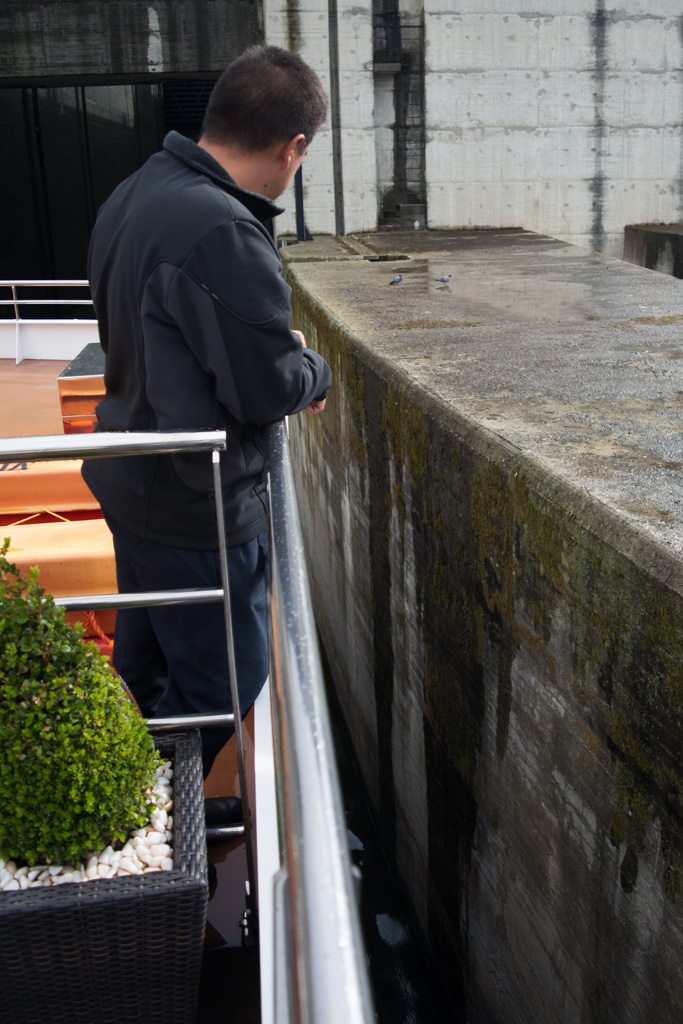 A Viking Torgil crewmember checks our progress as we enter the lock – one of five such ones we’d transit on our journey. Photo © 2015 Aaron Saunders 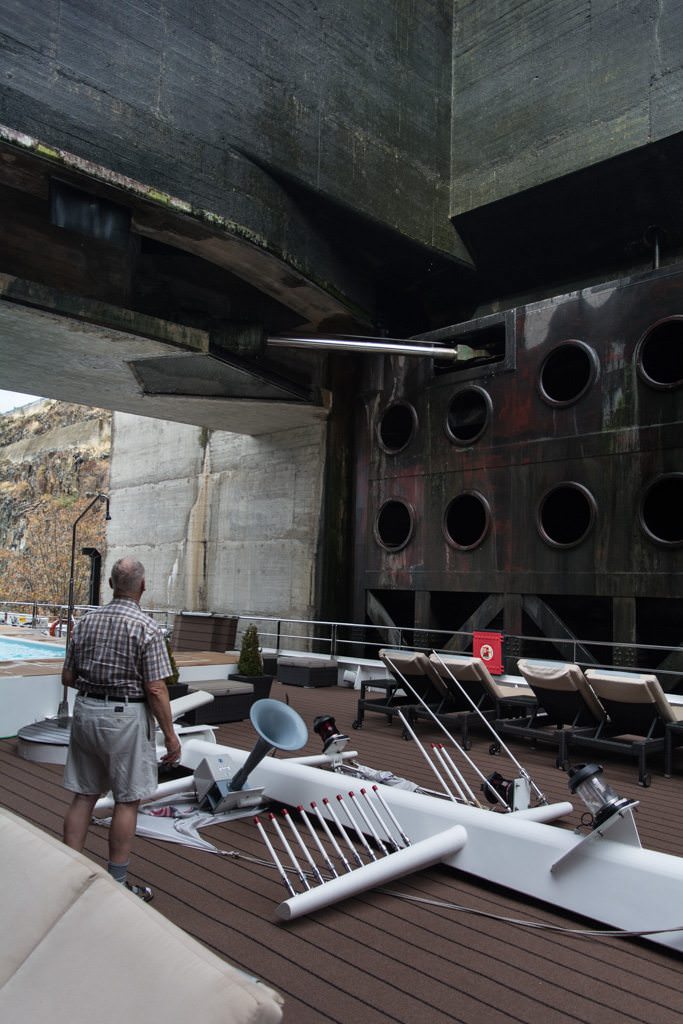 The massive lock gates in their housing against the wall of the lock. These shut to create a seal while water is either added or pumped out to raise or lower the ship. Photo © 2015 Aaron Saunders

But before you can say Fado!, the morning was over, having given way to another spectacular lunch in The Restaurant on Deck 2. Personally, I am still craving the “Portuguese Sandwich” I had a few days ago for lunch: 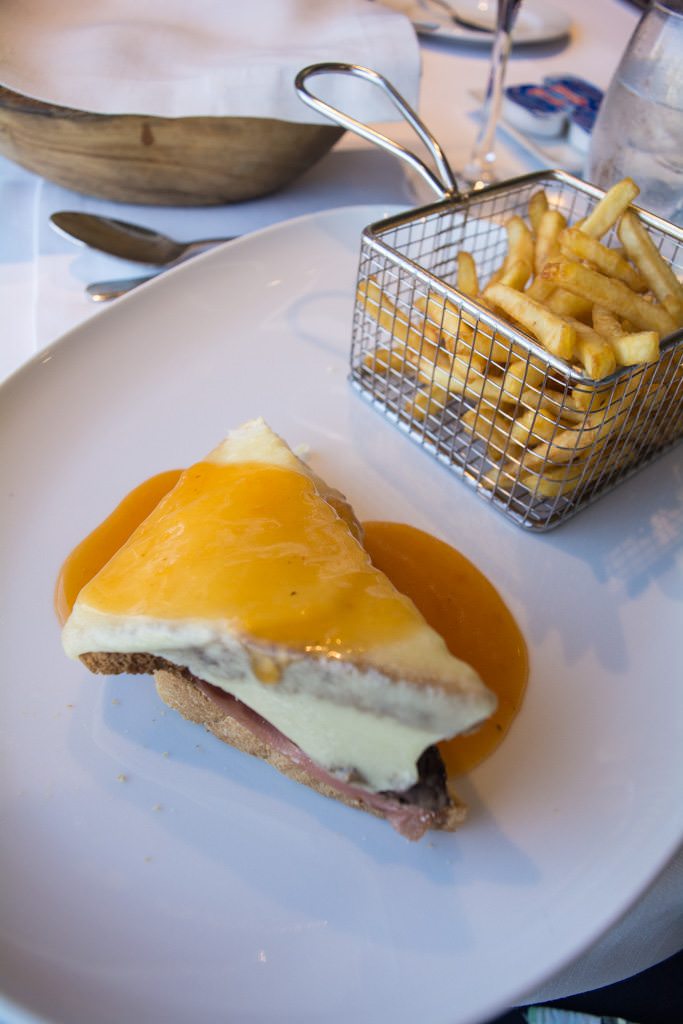 What goes great with a Portuguese sandwich? Photo © 2015 Aaron Saunders 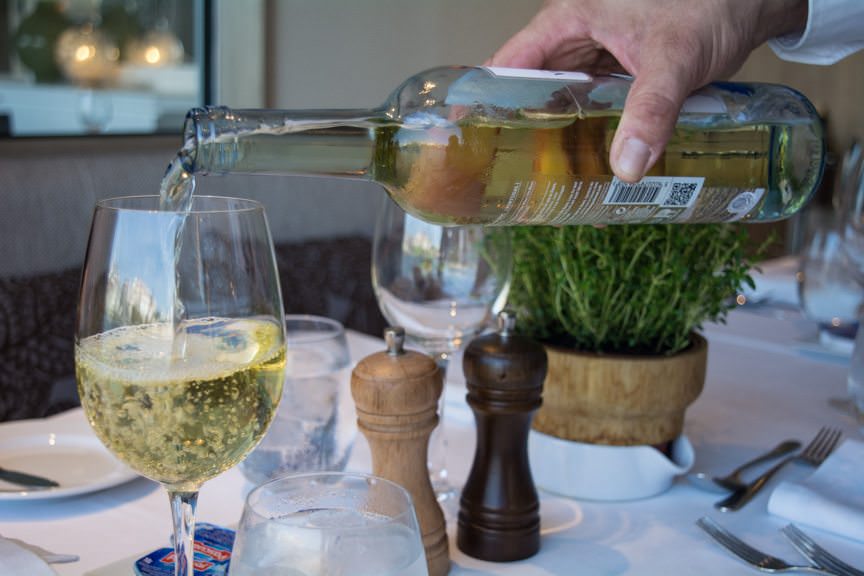 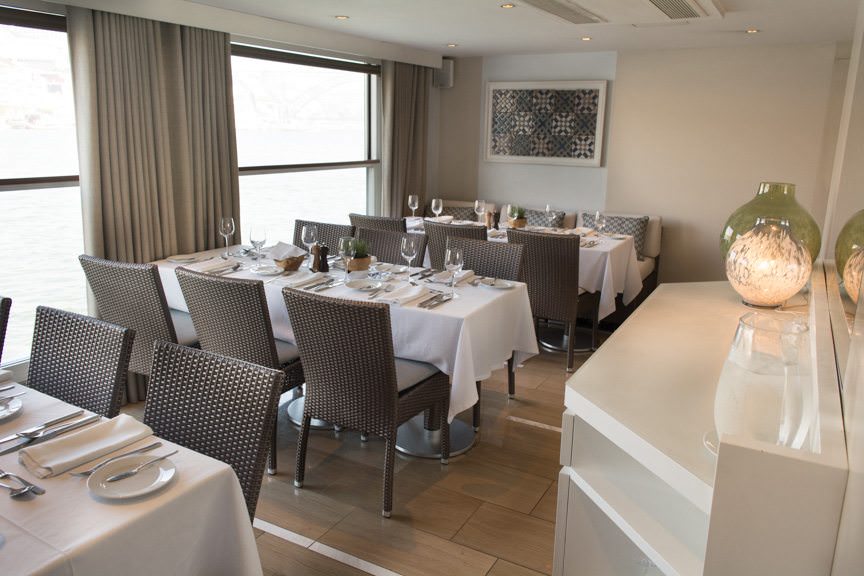 Shortly after one this afternoon, Viking Torgil came alongside at her berth in Barca d’Alva, Portugal. The last port of call along the Douro in Portugal, Barca d’Alva is a sleepy little port – and I’m not exaggerating. There’s a dock, an elaborately-lit bridge that glistens at night, and a sad looking little bar-café hybrid that functions as the social hub of “town.” So why are we here? Simply put, Barca d’Alva is a convenient jumping-off point for us to visit Castelo Rodrigo this afternoon, and Salamanca, Spain tomorrow.

In fact, did you know you can see Spain from the dock? It’s true: Spain is located less than 500 feet away, directly across the Douro. 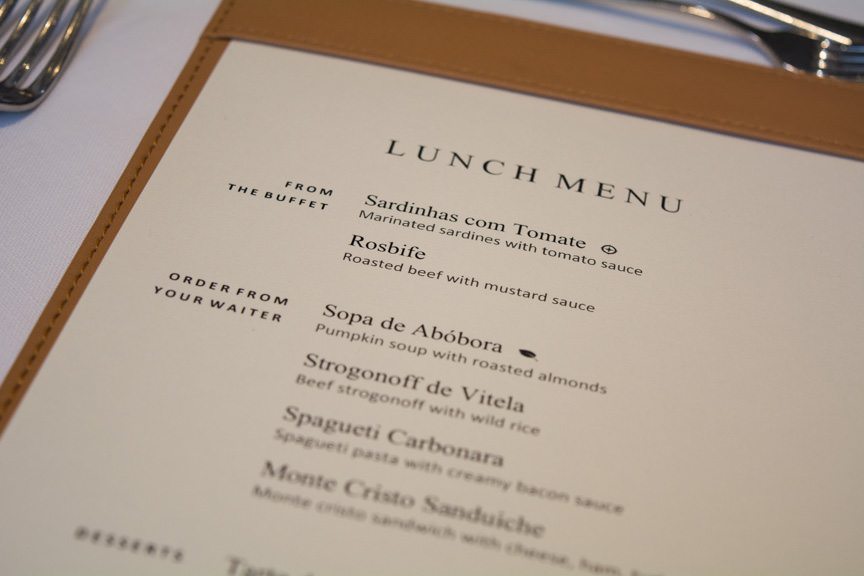 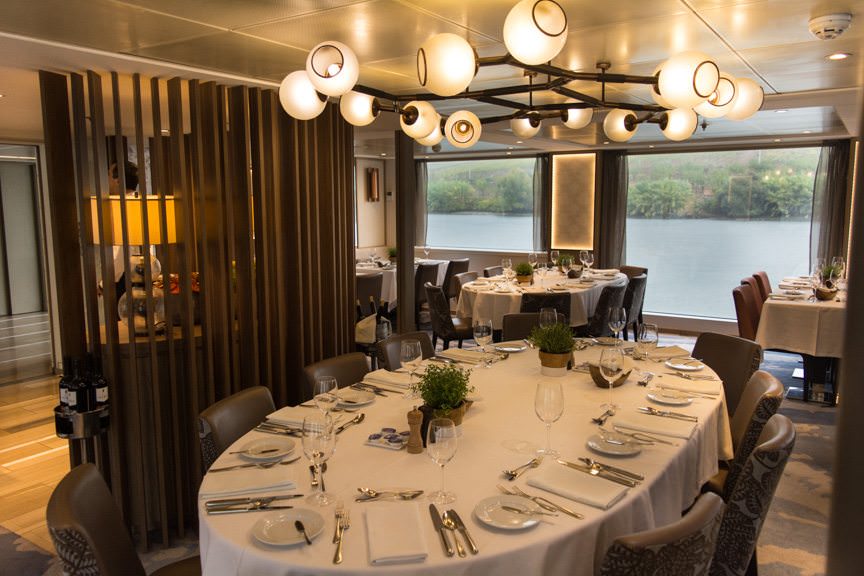 With the weather looking increasingly stormy, we disembarked Viking Torgil at 2:00 p.m. for Castelo Rodrigo – one of Portugal’s best-preserved historic villages.

According to local history (read: folklore), the site was first inhabited around 500 B.C., though the village as it exists today dates predominantly from the 1500’s. Today, this small, diminutive parish is home to but 50 people who live “intra muros”, or within the walls. 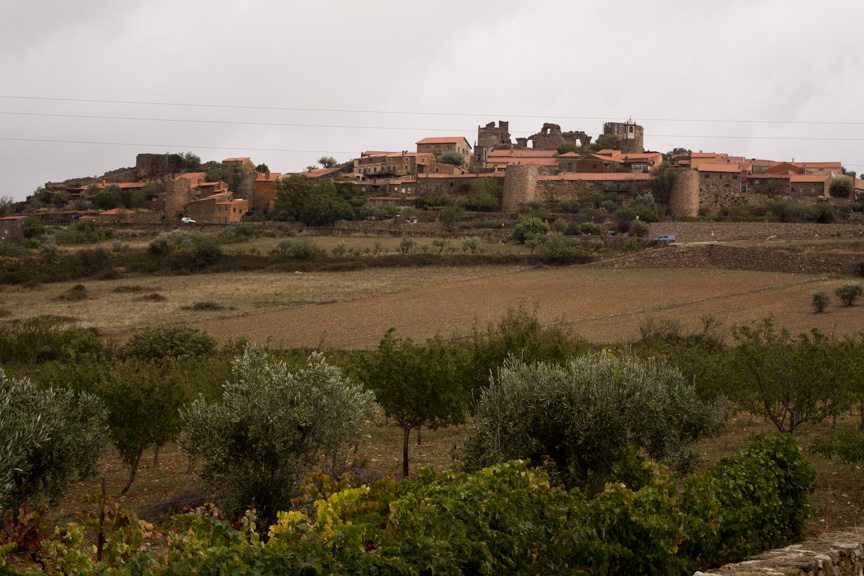 By the time the Amazing Coach (Bus A) pulled up outside the castle walls, the skies had darkened considerably and the wind had picked up with a ferociousness that I didn’t expect of Portugal. I expected to be sweating through several layers of clothing; I never thought I’d have to button my jacket and hold onto my hat while I was in Portugal!

Here’s the skinny on Castelo Rodrigo: it’s small. It’s cobbleston-y. And it is anchored by a single church, dating back to the 1500’s. You’re given a map on the way in by the kind locals, but truthfully, you’re never going to need it: if you get lost in Castelo Rodrigo, I’ve got a bridge in Brooklyn that I’d like to sell you. 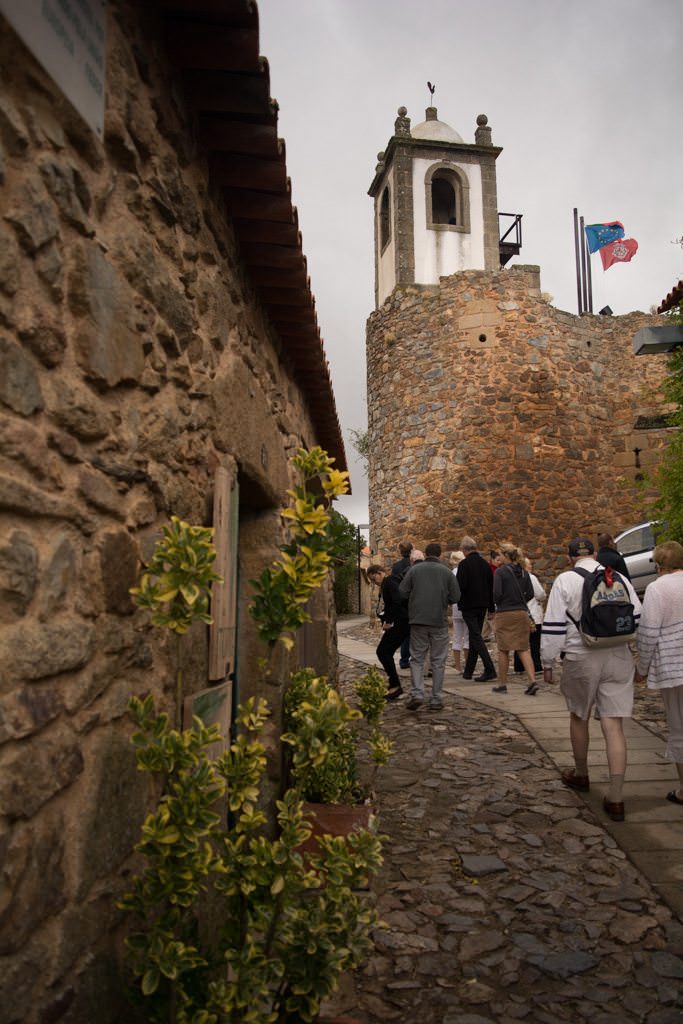 Given that and the blustery wind, I felt our stay here was perhaps a touch long. But, admittedly, some other aspects of the town were lost on me: the main culinary ingredient here is almonds. I have a nut allergy, which means that the cookies, pastries, liquors, and even some of the teas were lost on me!

A few photos of our afternoon in Castelo Rodrigo: 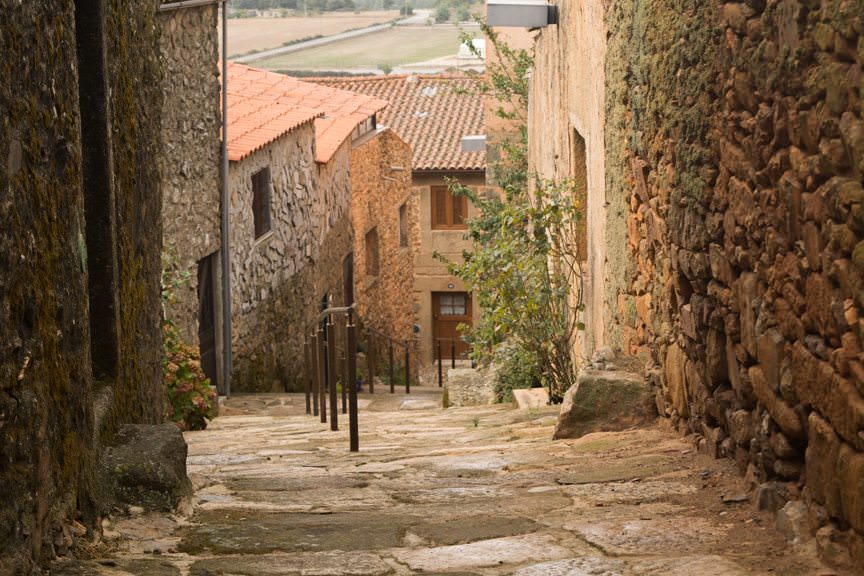 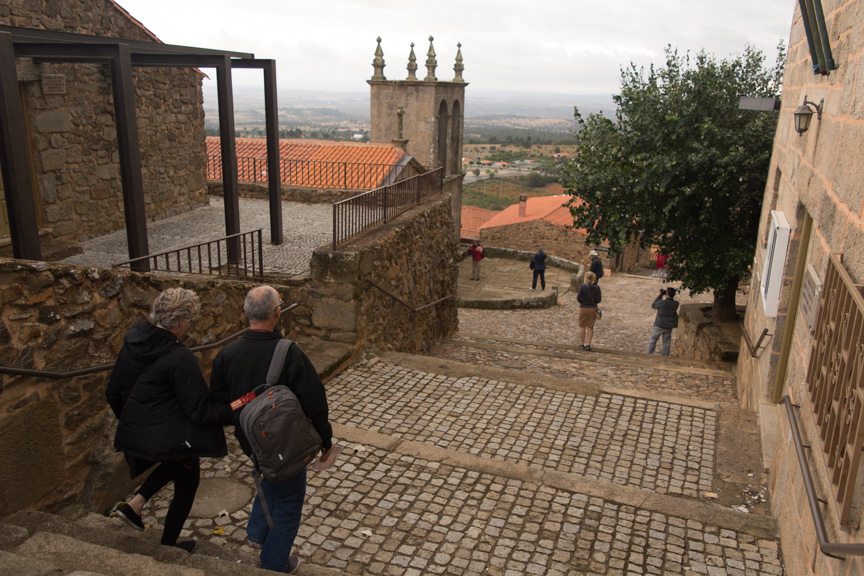 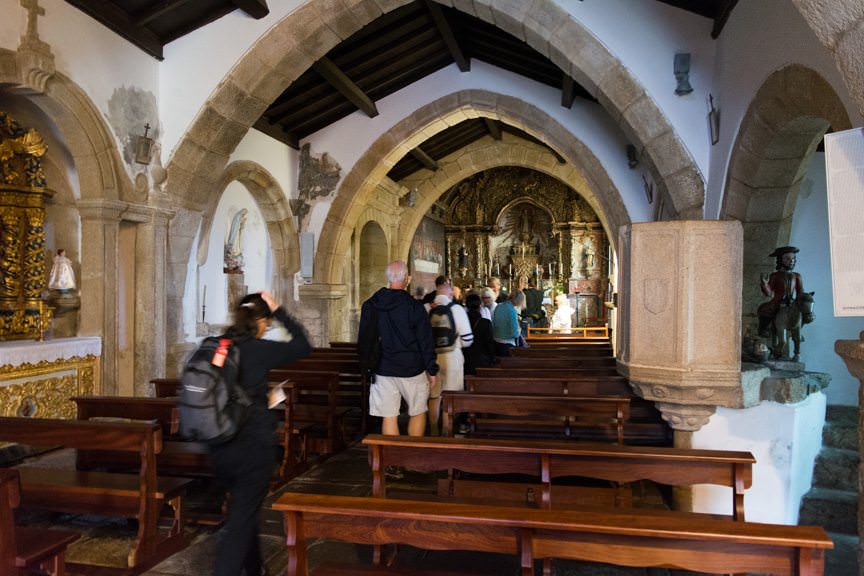 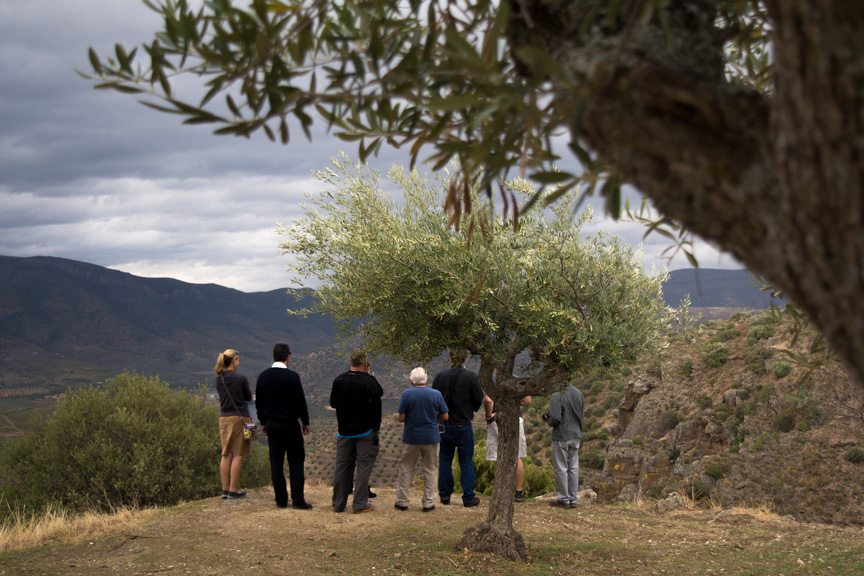 The spectacular scenery of the Douro River Valley did not fail to impress. Photo © 2015 Aaron Saunders

Today, we also had an excellent look at how the Viking Torgil operates – at least on the culinary end of things. Guests were invited to tour the galley located all the way forward, directly underneath the main Restaurant on Deck 2.

Accessible via a narrow staircase at the forward end of the Restaurant, the Galley is barely the size of two suites slammed together. It is perhaps 800 square feet at best, and contains all of the necessary food prep stations to feed over 100 guests three times per day. 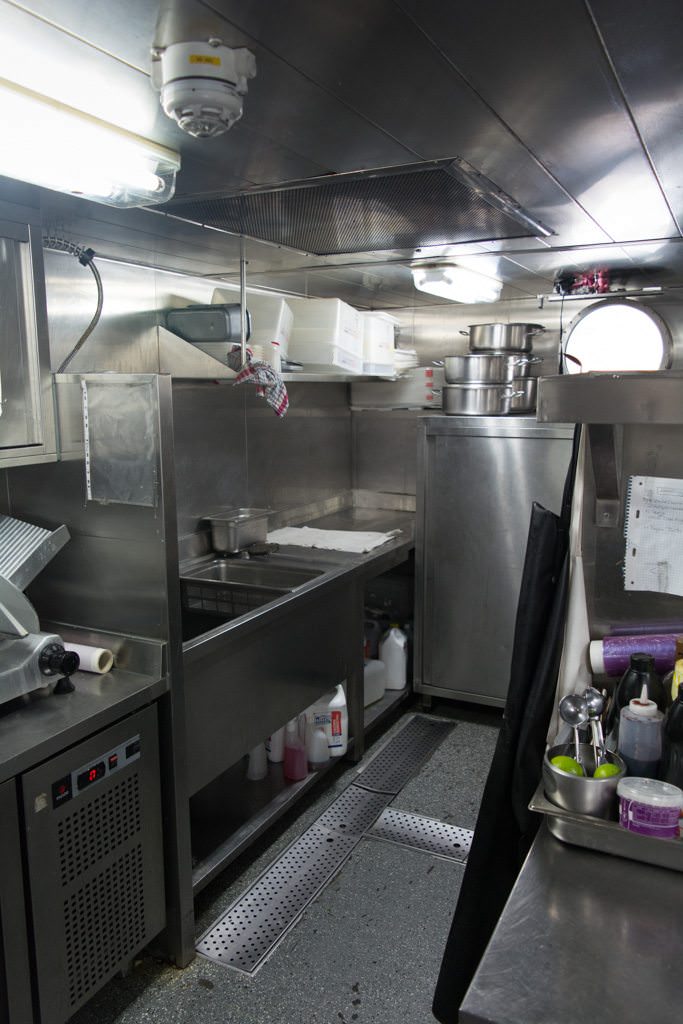 Back on Viking Torgil, we were invited to tour the ship’s Galley on Deck 1. Photo © 2015 Aaron Saunders

As far as shipboard galleys go, it’s a miniscule space with low ceilings and six porthole windows to let in natural daylight. Yet the culinary team onboard Viking Torgil are able to do some amazing things.

Personally, I feel that the food onboard Viking’s Longships on the Danube and Rhine, for example, is more varied and elaborate. The ships are bigger, the galleys are bigger, and more ports exist that can provision a ship, generally speaking, than on the Douro. But the food on the Viking Torgil has, on the whole, been very good, with plenty of Portuguese influence in the ingredients. 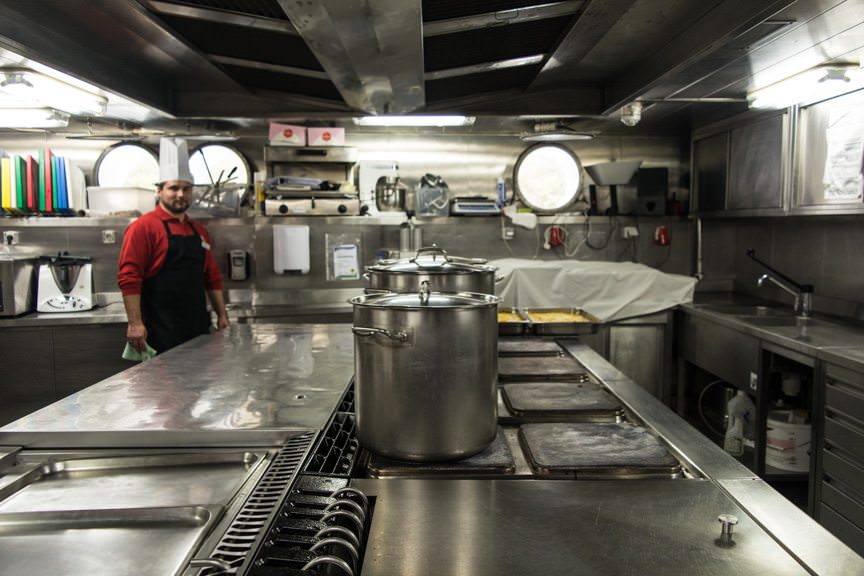 The galley is small, but functional. Photo © 2015 Aaron Saunders

In fact, ingredients onboard are sourced from right here in Portugal – with the exception of the smoked salmon. Those come from Norway!

But good cuisine doesn’t create itself. That job falls to the friendly, hardworking galley team – just one facet of this exceptional crew that Viking has procured for their river and ocean cruises. And although the majority of the crew here are employed directly by Douro Azul, it’s clear that Viking has had a hand in ensuring that their high standards are met here onboard Viking Torgil and her sister, Viking Hemming.

Good food is lovely, but for me, it’s the crew that truly makes the journey memorable. 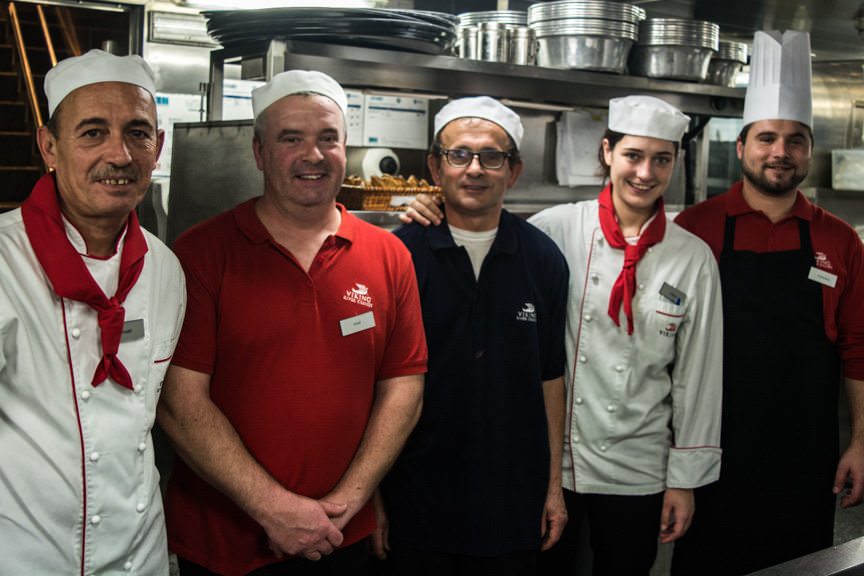 Our Live Voyage Report from onboard Viking River Cruises’ Viking Torgil continues tomorrow as we make an overland journey to Salamanca, Spain!! Be sure to follow along with our adventures on Twitter @deckchairblog.