Cathedrals and Fog in Porto, Portugal 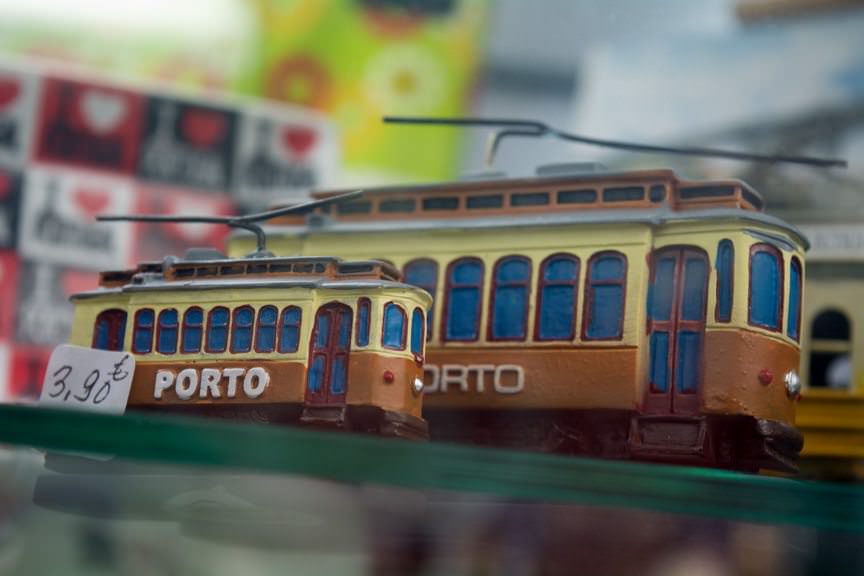 The stepped hills of Porto, Portugal looked more like Foggy London Town this morning, as thick grey mist blanketed the Douro River to the east and the west. Not that the damp weather has dampened spirits; today is our chance to explore the beautiful town of Porto, and that’s exactly what guests aboard Viking River Cruises’ Viking Torgil did, setting out just after eight o’clock this morning on a half-day tour of this beautiful city. 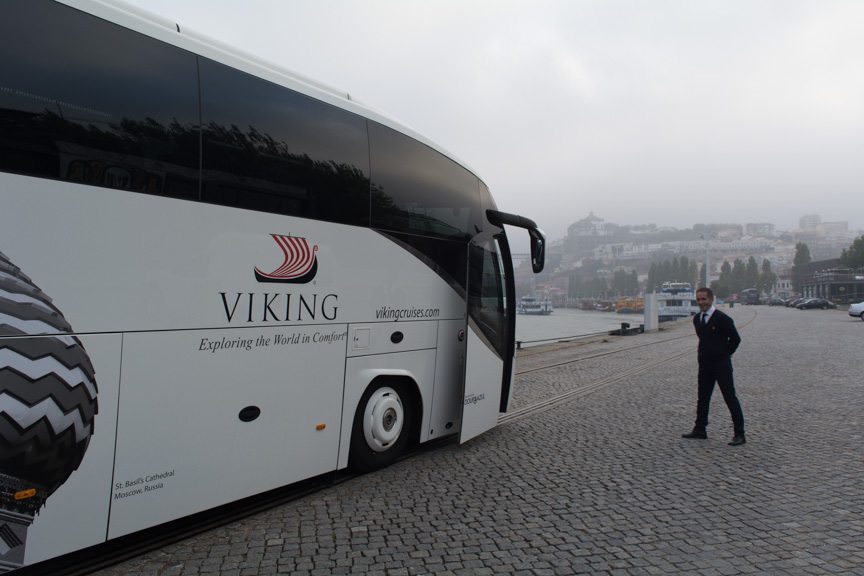 A Foggy Porto Morning: guests set out for a morning of exploration in Porto, Portugal. Photo © 2015 Aaron Saunders

Our first stop was only accentuated by the foggy mist that rolled in and out over the horizon. Sé do Portoi, or Porto Cathedral, is one of the city’s oldest monuments and is regarded as one of the most important Roman Catholic monuments in the entire country.

Of course, with the fog rolling in and out, it also looks like it could have come straight from the backlots of Hollywood; a creepier Cathedral I have never seen. Coupled with the moody atmosphere, you’d almost expect the elaborate statues and gargoyles that buttress the structure to come to life at any moment, turning their concrete heads in an Exorcist-esque moment of slate-snapping macabre. 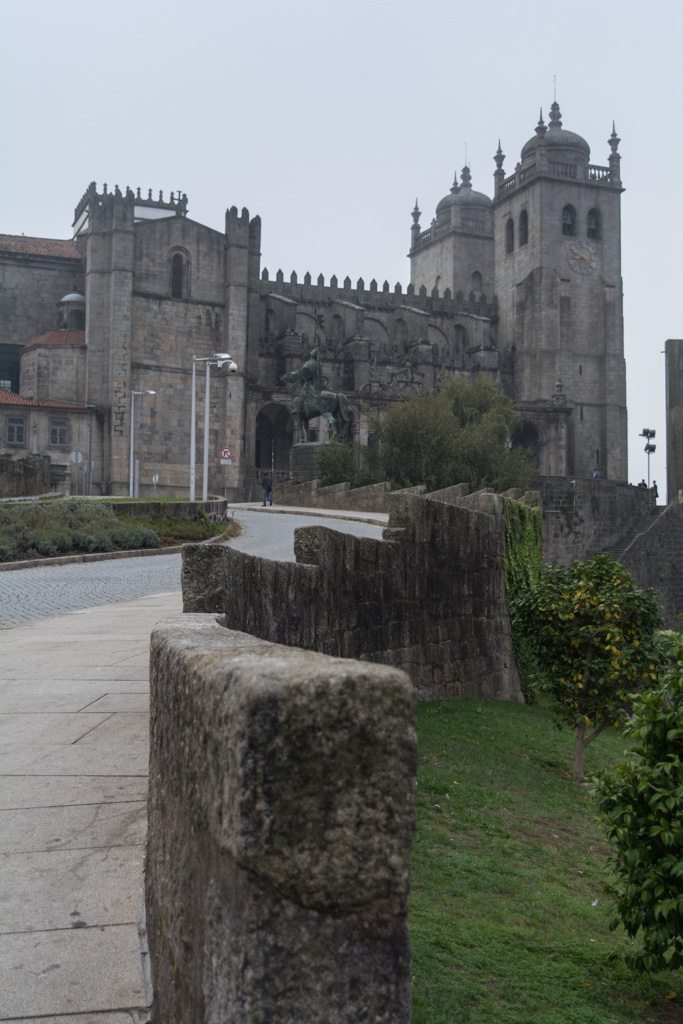 Our first stop of the day was the moody, ethereal Porto Cathedral – one of the oldest structures in the city. Photo © 2015 Aaron Saunders

In keeping with the style at the time, the Cathedral was begun around 1110, and completed six hundred-odd years later, in 1737. Or, roughly the duration of one of the Presidential election Campaigns in the United States. Only joking. In all seriousness, the Cathedral took six hundred years end-to-end to complete, with results in the structure having a variety of styles and appearances that sometimes conflict and contrast with existing sections. It’s like This Old House, Cathedral-style. 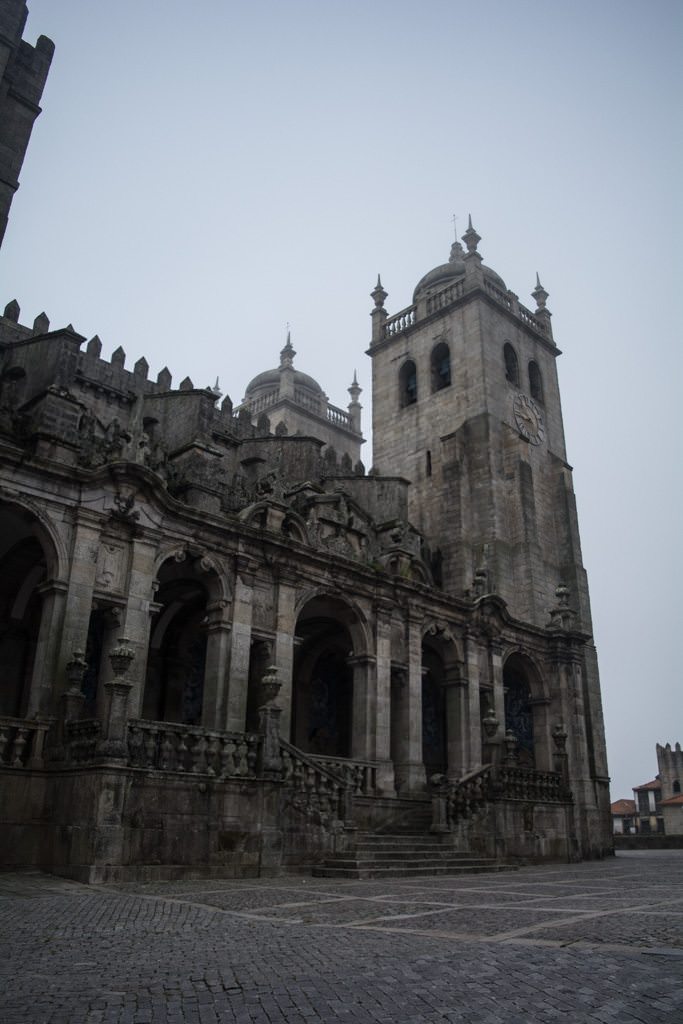 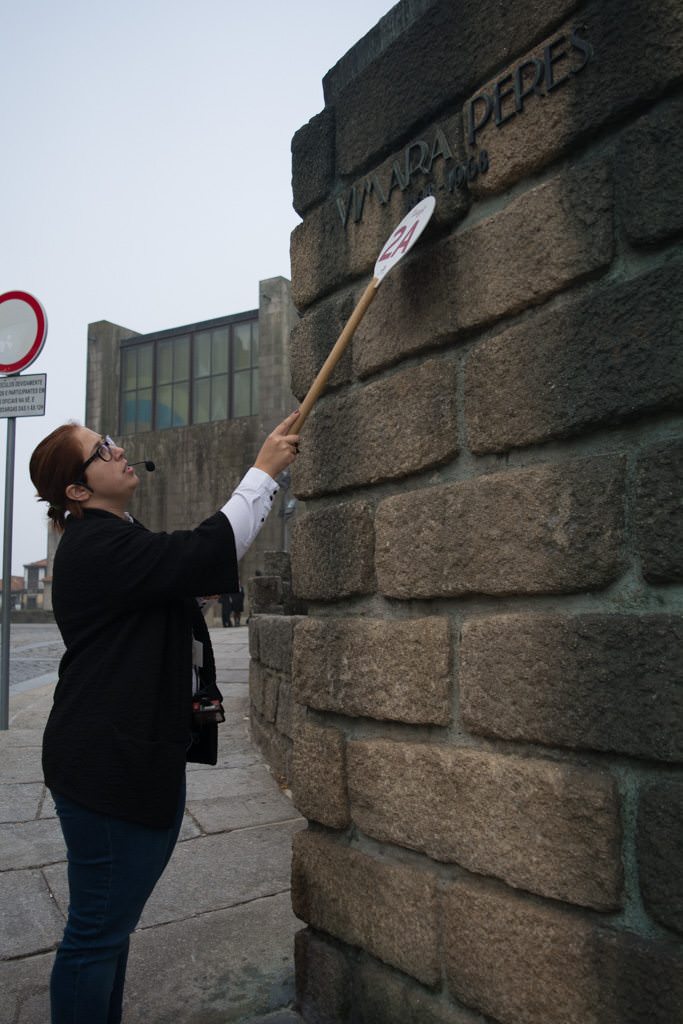 Our guide points out an important feature of the Cathedral for us to see. Photo © 2015 Aaron Saunders 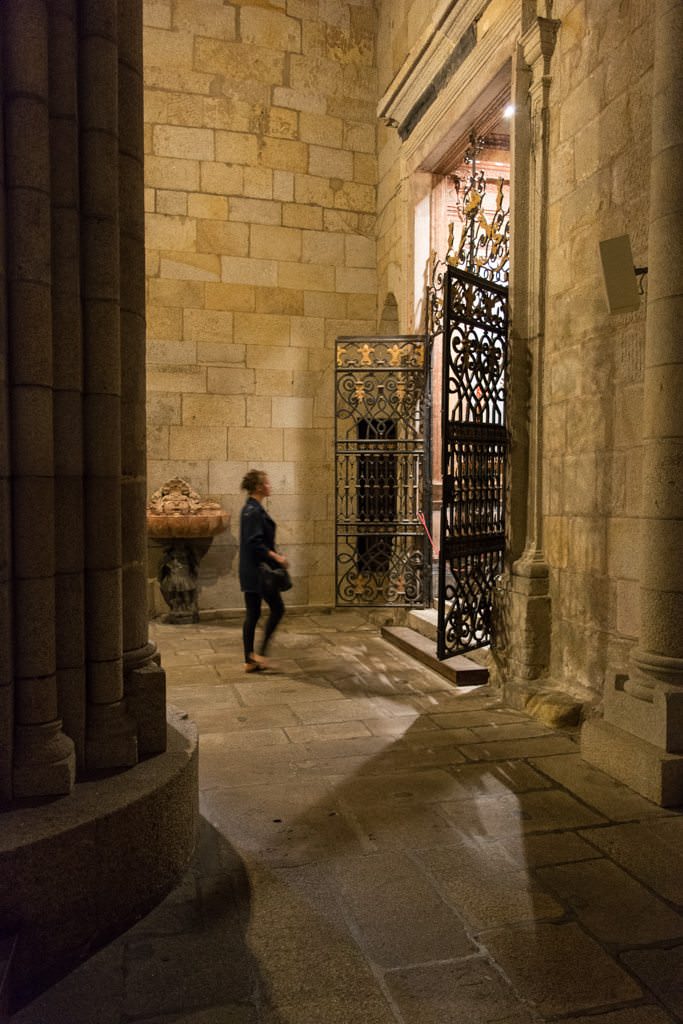 Inside Porto Cathedral, with its moody lighting and long shadows. Photo © 2015 Aaron Saunders 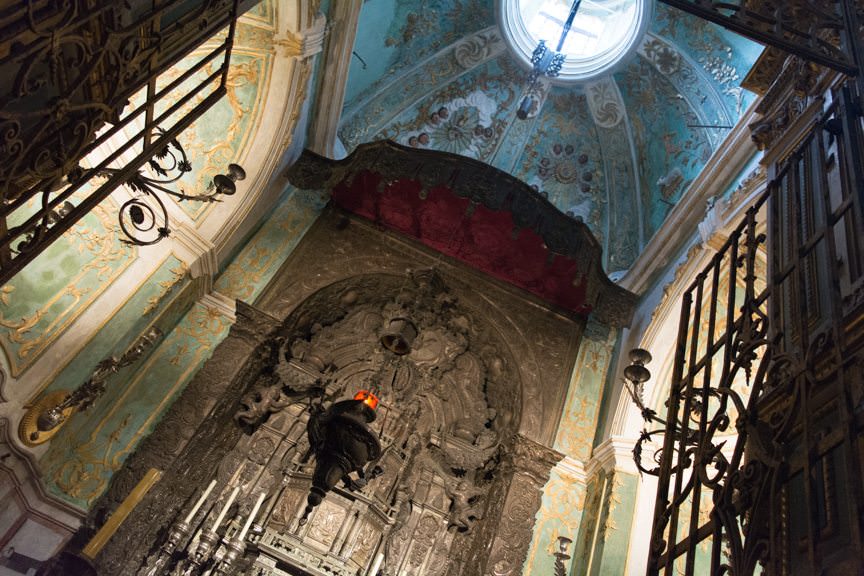 What I enjoyed most about this was that our Group A (which, obviously, stands for Awesome) guide gave us a detailed explanation of the history of the cathedral before turning us loose on the grounds for some well-deserved free time. Personally, I appreciate that; I like to have the time to make my own discoveries when I am touring any place.

Following that, we strolled over to Porto’s central train station. At first, it seems like any other European train station: an ornate, Victorian-era building attached dramatically to half a dozen rail lines. But look closer: the arrivals hall of the station is adorned with beautiful decorative tile work that almost resembles the Delft tiles that the Netherlands is known for. 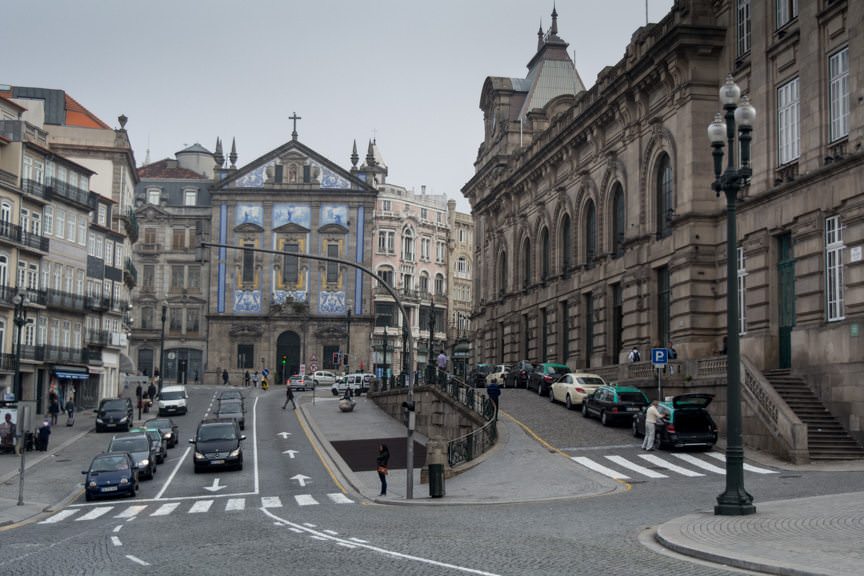 Our next stop: Porto Central Station, located on the right. Photo © 2015 Aaron Saunders

Passed briskly by locals looking to catch the numerous trains bound for the suburbs of Porto and places beyond, these works of art adorn nearly every wall in the station. We slowly worked our way around the station, joined by other like-minded tourists that started to flood the station in clumps. 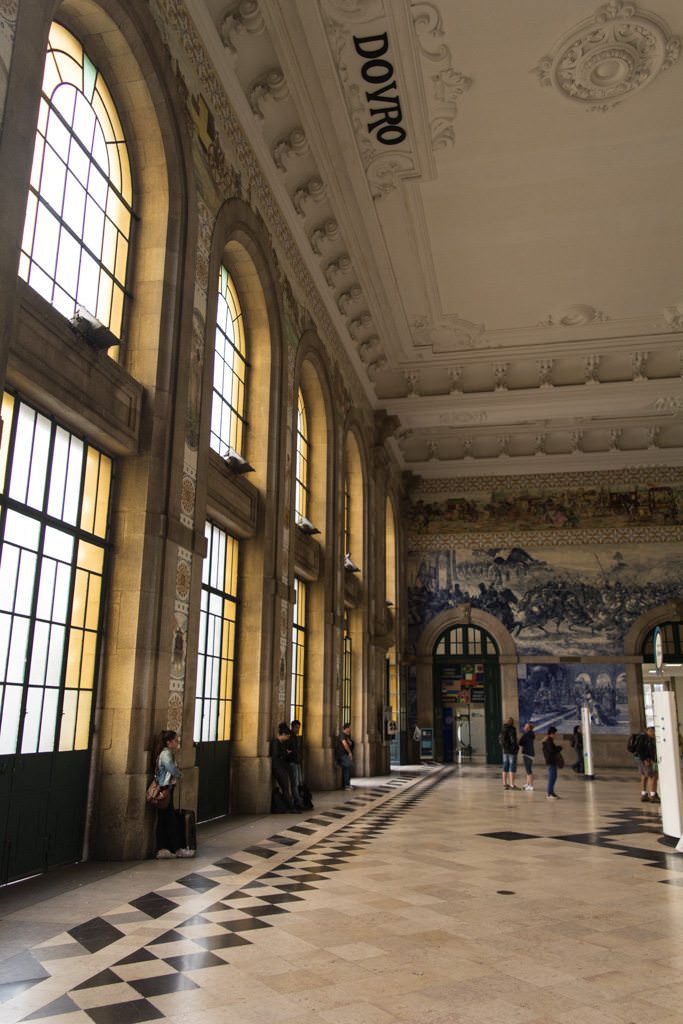 Inside Porto Central Station, with its impressive murals in the arrivals hall. Photo © 2015 Aaron Saunders 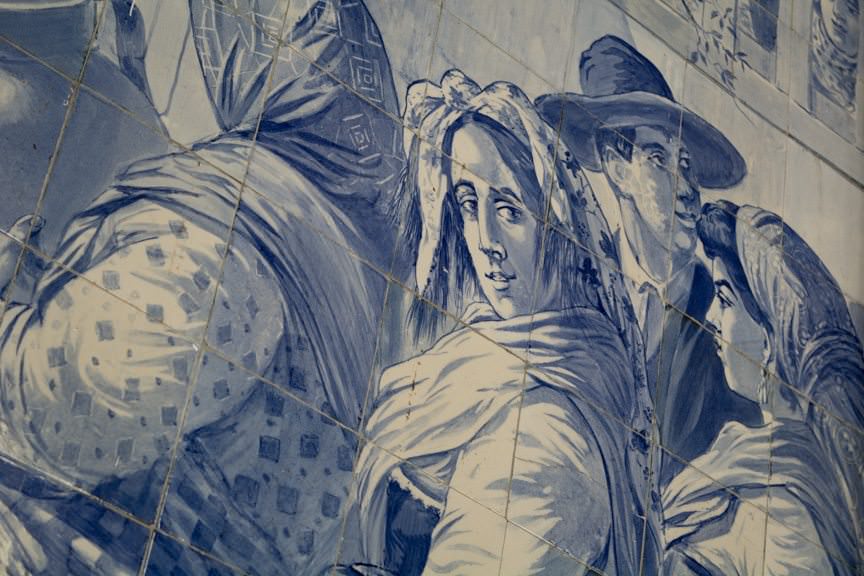 Of course, whenever you have a bunch of tourists with cameras and QuietVox earpieces looking distractedly around a busy space, you’ve got a recipe for pickpockets. These guys are total pros; while nothing happened to our group (we had been warned by our Viking escorts to take necessary precautions to safeguard our valuables), I did see one pickpocket. He was most definitely a local (his impeccable dress certainly precluded him from being North American), but unlike the rest of us, he wasn’t looking at the walls. He had a QuietVox earpiece in his ear, but a quick scan of his coat revealed the cord merely went into a zipped-up pocket. Also unlike us: dark sunglasses hid his eyes. 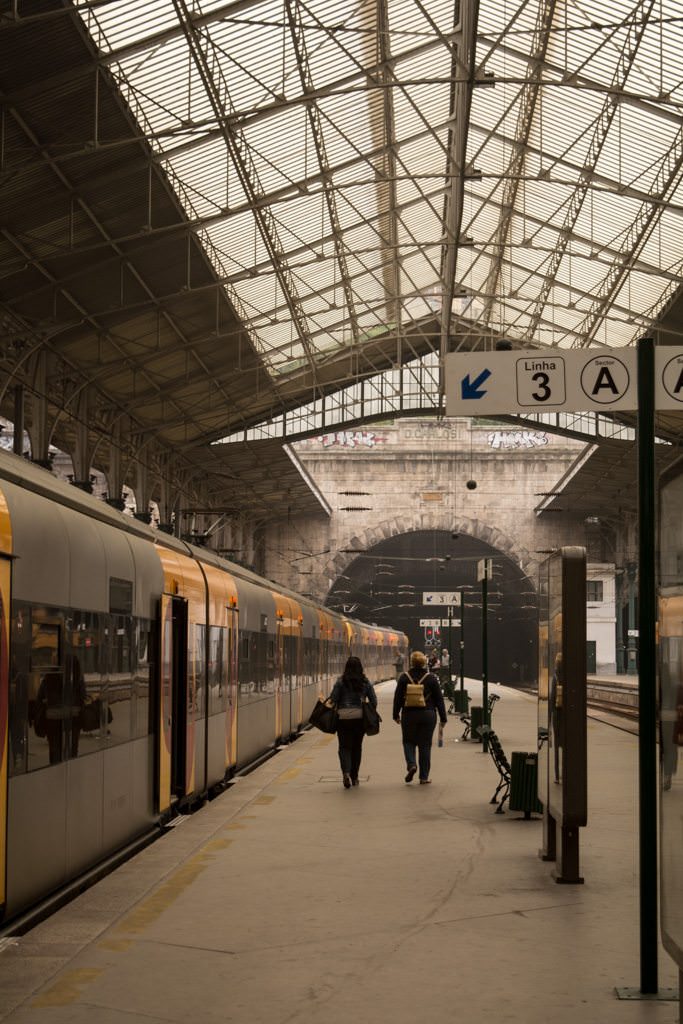 Even with its modern trains, the track area is still quite beautiful and reflects a bygone era. Photo © 2015 Aaron Saunders

So was he a pickpocket? I’d strongly suspect so. Once he saw me looking at him, he disappeared outside the station. I saw him later, following another group of tourists around. As with any crowded public space, it’s a good idea to move your wallet to your front hip pocket, or sling your purse around the front of your body.

Following our trip to the train station, we had free time to enjoy beautiful downtown Porto. Since I was here back in 2014 for the christenings of Viking Hemming and Viking Torgil, so I felt that I could afford to just take a wander around the area and do as the Portuguese do: sit down, take a coffee and just watch the world go by. 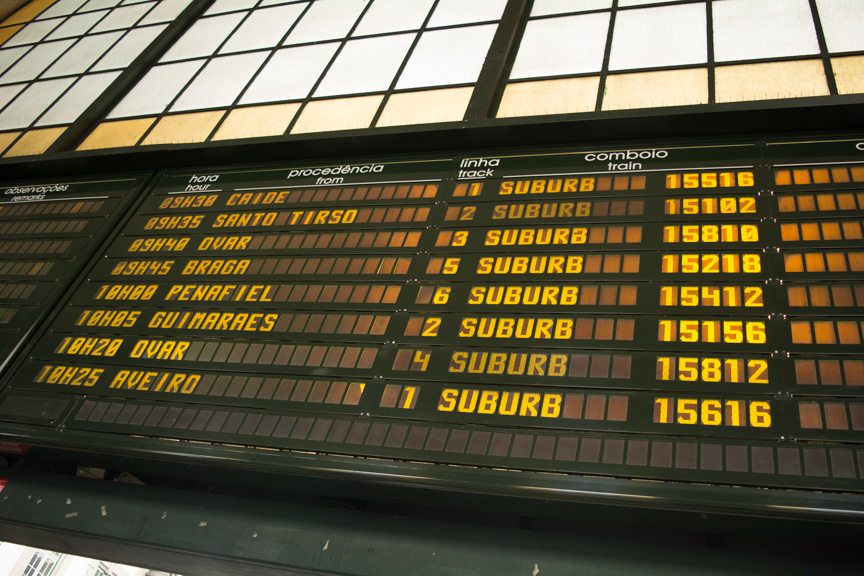 What goes great with free time? Port wine, of course! After our free time was up, we re-boarded the coach in Porto and set out across the river for Gaia, where we were invited to tour the Real Companhia Velha’s facility. The company makes a wide array of port wines, table wines and even olive oils on-site, and walking through their wine storage facility with its soaring oak tanks that stretch as far as the eye can see is a feast for the senses. Wine has a sickly-sweet smell that permeates everything with its sugariness, and the low-light of the warehouse makes the entire experience feel very paradoxical. 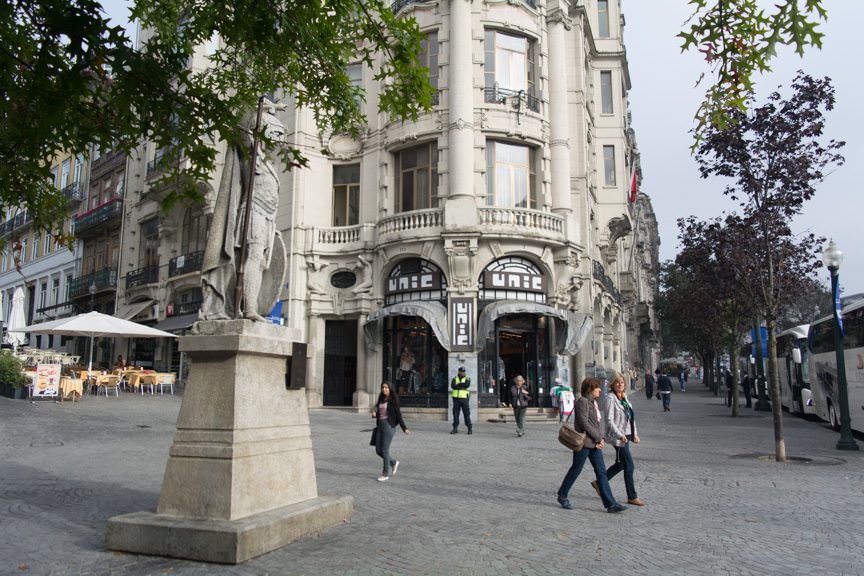 We had free time to explore and discover our own Porto, which I greatly appreciated. Photo © 2015 Aaron Saunders 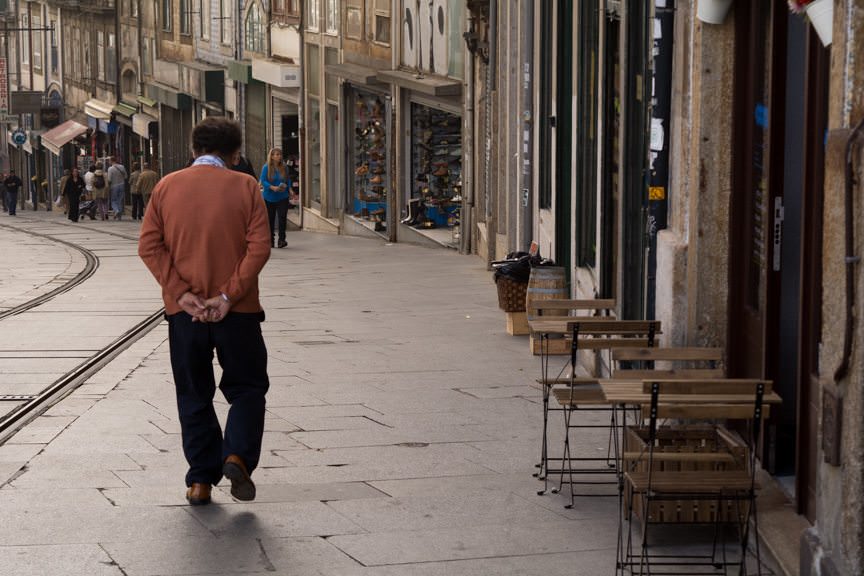 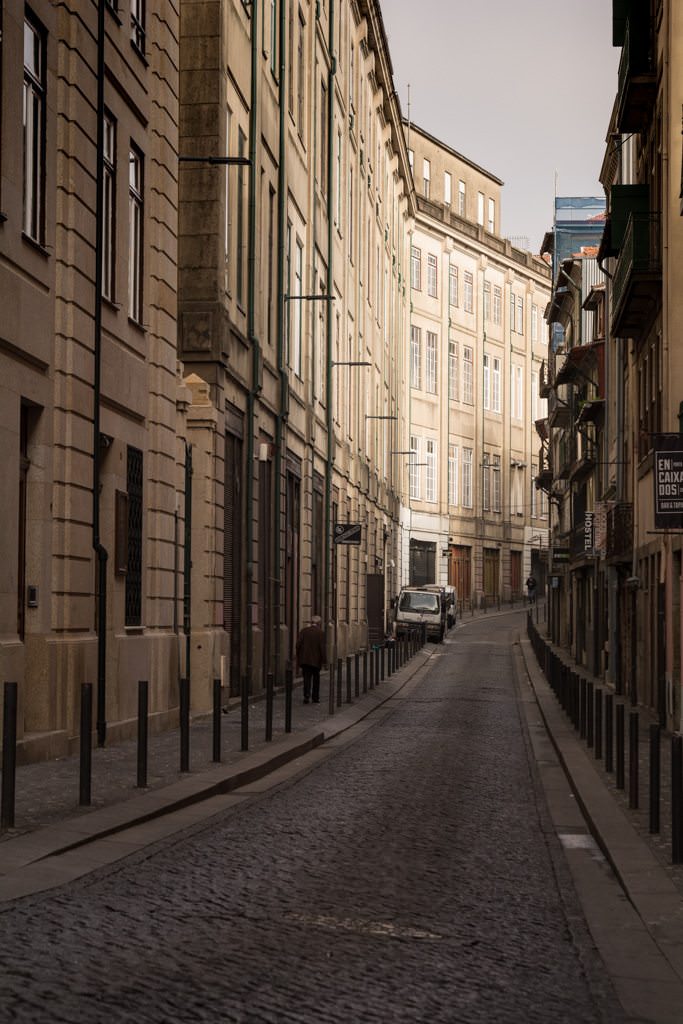 This was something I’d really looked forward to. Viking did such a spectacular job with the wine tastings in Bordeaux aboard Viking Forseti, and I was excited to have a similar experience here. Unfortunately, Companhia Velha only allowed us to sample two port wines: a single red and a single white. Neither was terribly impressive. I was curious to try some of their other port wines, but those were not available for tasting. Worse, we rushed through the tasting with just 30 minutes of time spent at the facility. 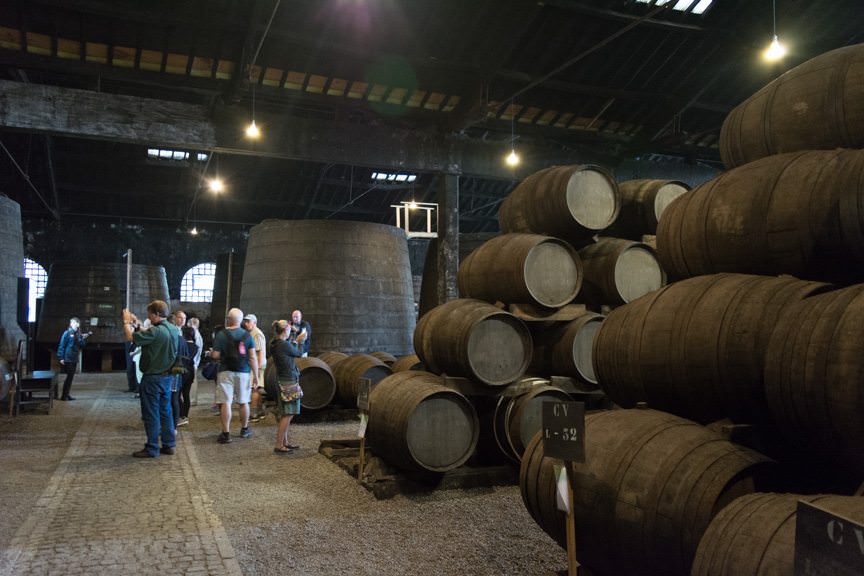 We also stopped back in Gaia for a port wine tasting. Photo © 2015 Aaron Saunders 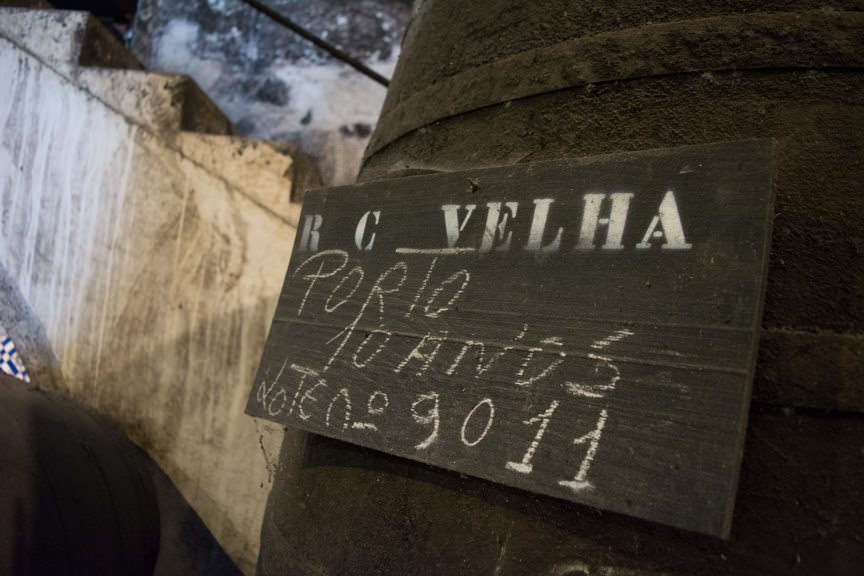 While the company made a wide variety of ports, wines and olive oils…Photo © 2015 Aaron Saunders 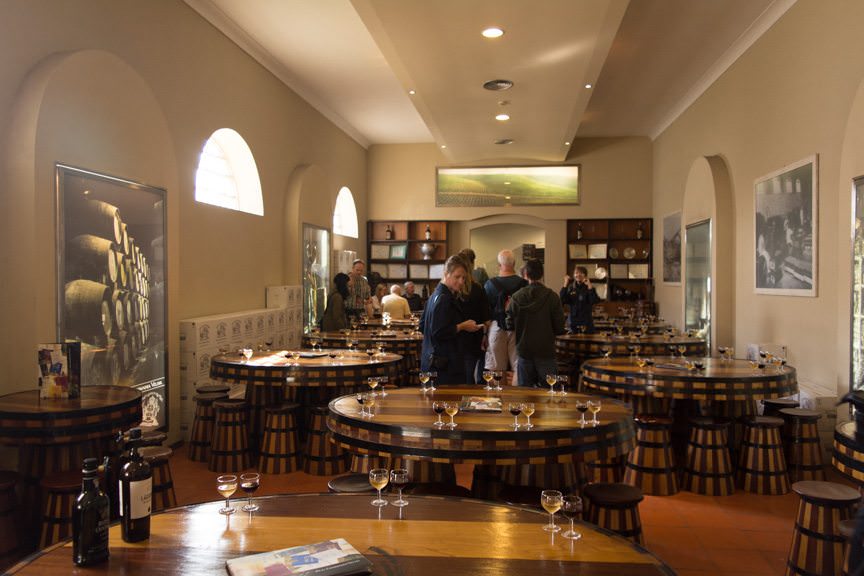 …we were unfortunately only able to sample their two entry-level white and red ports. Photo © 2015 Aaron Saunders

Now, the one nice thing that Viking does is to provide guest feedback forms at the Reception Desk on Deck 3 for guests to note the pros and cons of their shore excursions. One of the things I love most about Viking is that they are constantly tweaking their shore excursion program to strike the right balance between price and quality.

It’s not that the port wine tasting was bad; it’s just that it didn’t fit in with Viking’s high quality standards. 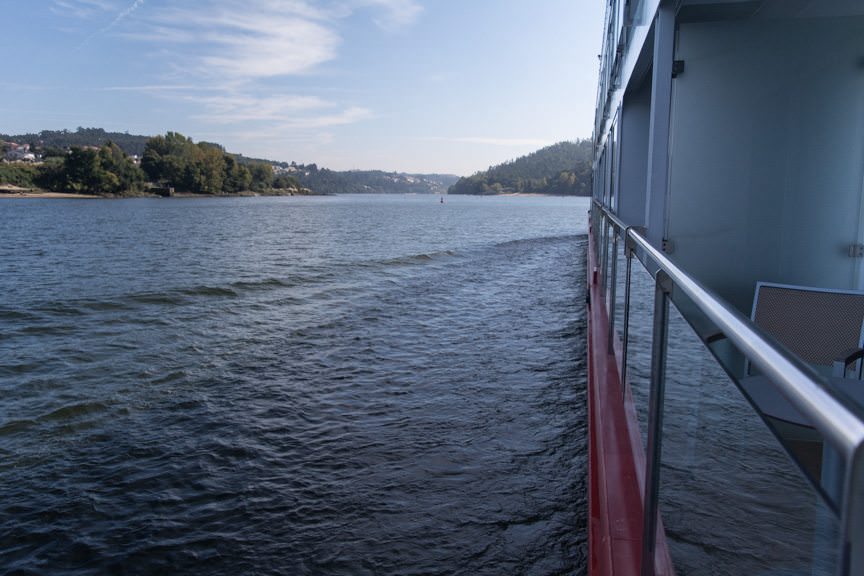 This afternoon, we sailed the Douro…Photo © 2015 Aaron Saunders 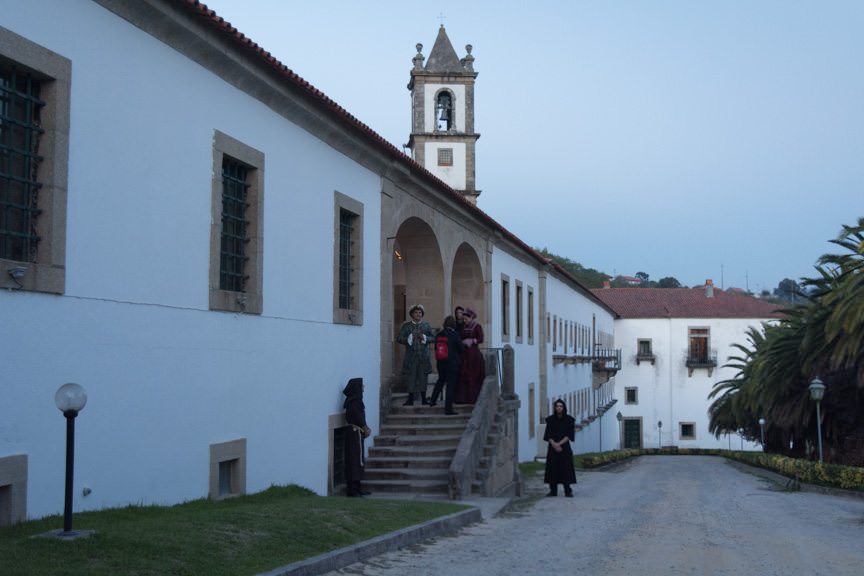 …and stopped for a spectacular dinner ashore at the Alpendurada Monastery. Photo © 2015 Aaron Saunders

What did fit in with Viking’s standards, however, was the spectacular dinner extravaganza that all guests here onboard the Viking Torgil were treated to. After cocktail hour in the Viking Lounge, at 7:00 p.m. guests set out by coach for a very special dinner at the the 11th century Alpendurada Monastery. 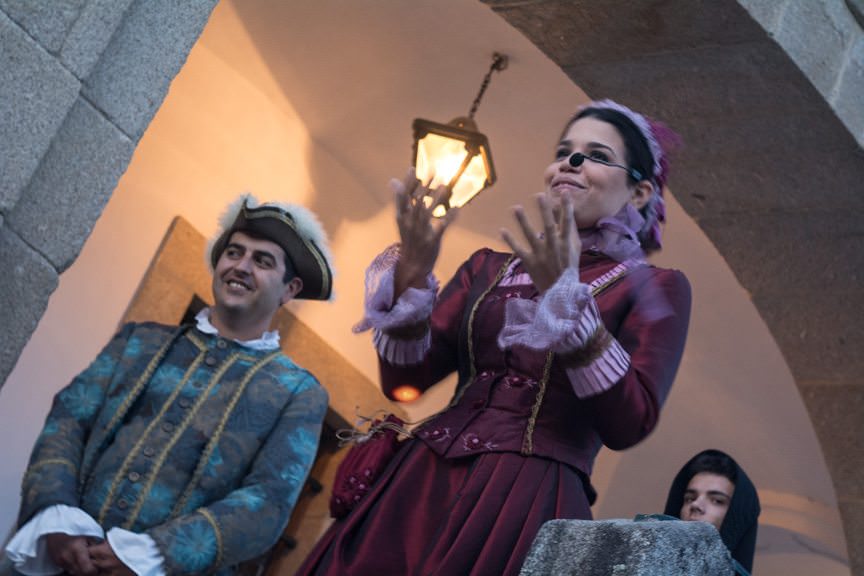 Nestled in the village of Alpendurada e Matos, the monastery overlooks the Douro river and the lush green hills beyond, which began to slowly disappear as the sun continued its march towards the horizon. 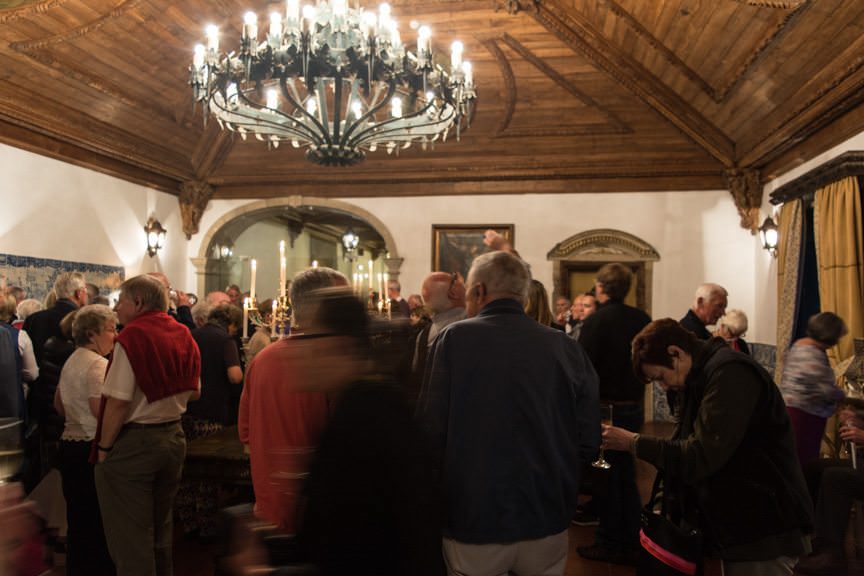 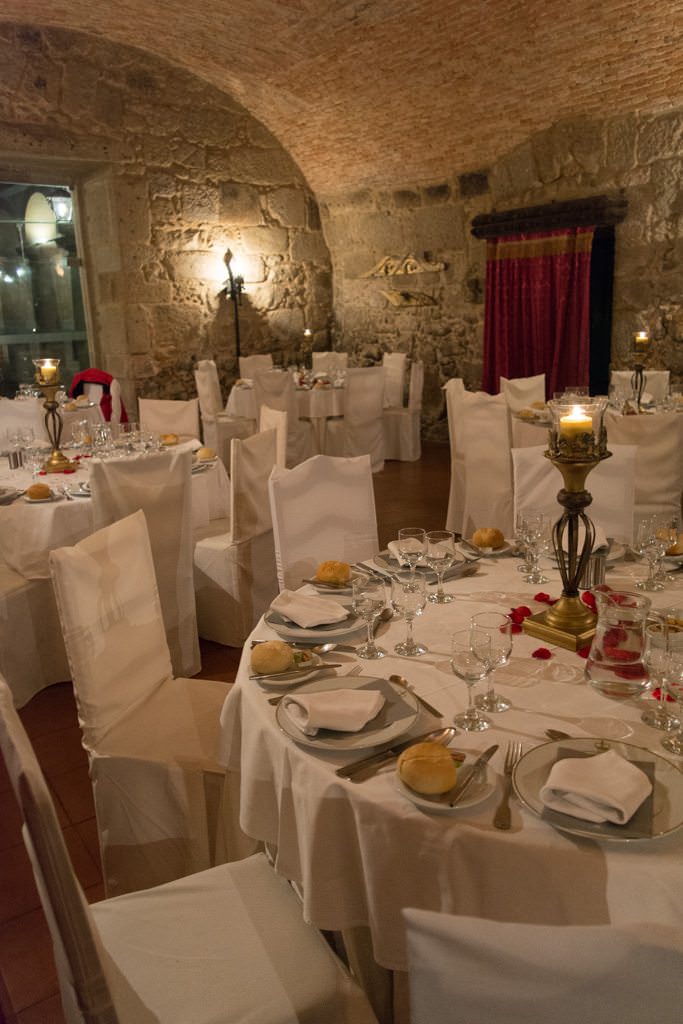 …before beginning a fantastic dinner in the Monastery’s cellar. Photo © 2015 Aaron Saunders

Backlit by lanterns, the monastery looks very much today as it would have during its heyday. Today, the monastery is actually a luxury hotel property that offers dining spaces and venues like the one we enjoyed. 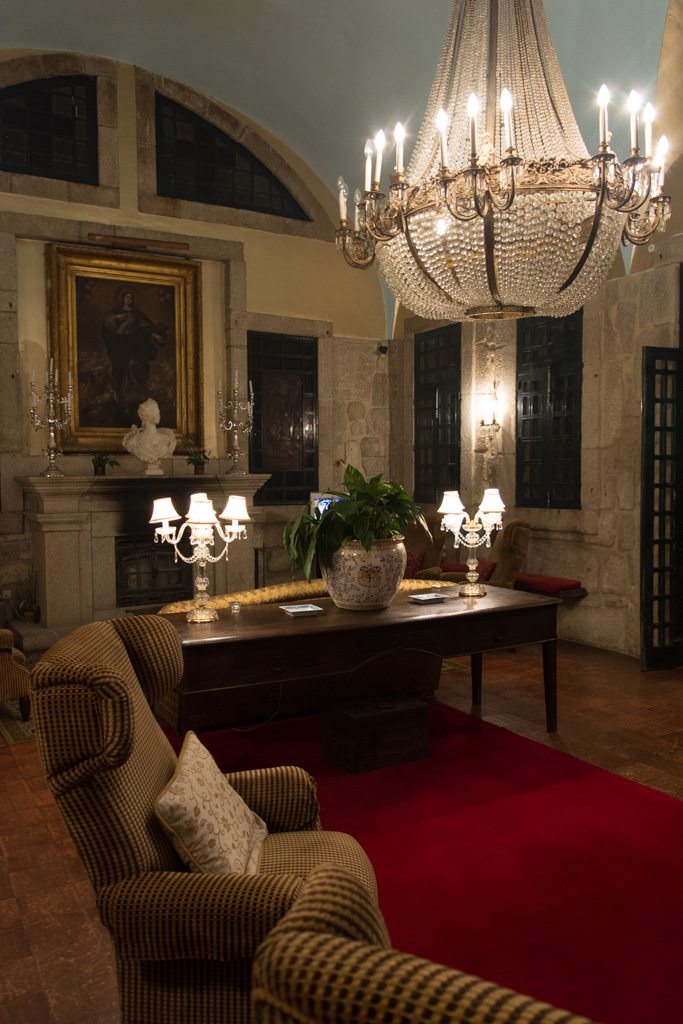 Following a brief tour of the property, we were led into what appeared to be a traditional cellar on the first floor for a spectacular dinner that was, in terms of cuisine and surroundings, one of the best on this trip so far. We were also treated to another Fado musical performance, which only improved in quality over our last two.

Just before midnight, guests returned to the Viking Torgil – full, happy, and very much enamoured with all things Portugal. 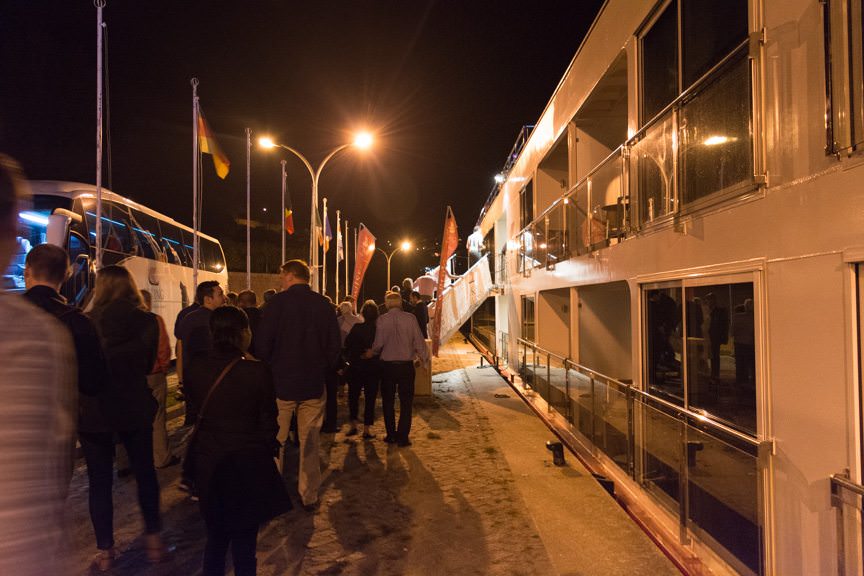 Returning back to the Viking Torgil after a pleasant and full day of exploration. Photo © 2015 Aaron Saunders

Our Live Voyage Report from onboard Viking River Cruises’ Viking Torgil continues tomorrow as we travel to Regua, Portugal! Be sure to follow along with our adventures on Twitter @deckchairblog.