You are here: Home / Advisories / What You Need To Know About Shipboard Internet On Your River Cruise

One of the most hotly contested features on river (or, for that matter, ocean) cruise ships is the onboard WiFi internet access. Everyone expects it to be as quick and reliable as it is in their homes, and disappointment mounts as speeds slow to a crawl and connectivity becomes impossible.

Here’s what you need to know about accessing the internet on your next river cruise: 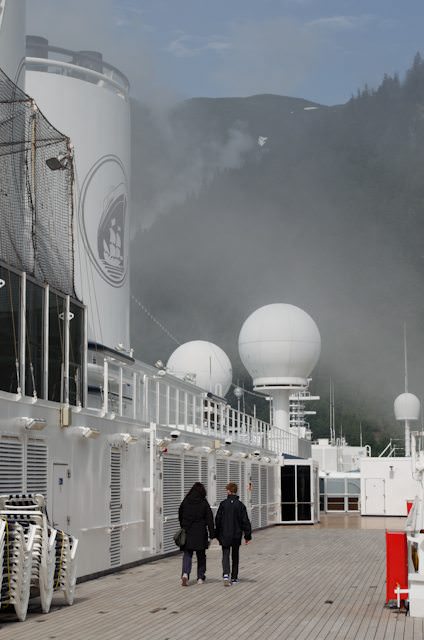 A look at the uppermost deck aboard Holland America Line’s Zuiderdam. Note the giant satellite “domes” in the background. Photo © 2012 Aaron Saunders

The good news: The WiFi internet on most river cruise ships is provided entirely free-of-charge. Now, the bad news: it’s slow. Agonizingly slow, in some cases.

So why can’t cruise lines just “make it faster” to mimic the speed found in most hotels? It’s a question of logistics. Remember, a ship is a moving target. On a oceangoing ship, there are large satellite domes clustered on the top deck that run the ship’s telecommunications networks. But on a river cruise ship, with its heavily restricted physical dimensions, simply installing a 20-foot tall satellite (or four) isn’t possible. 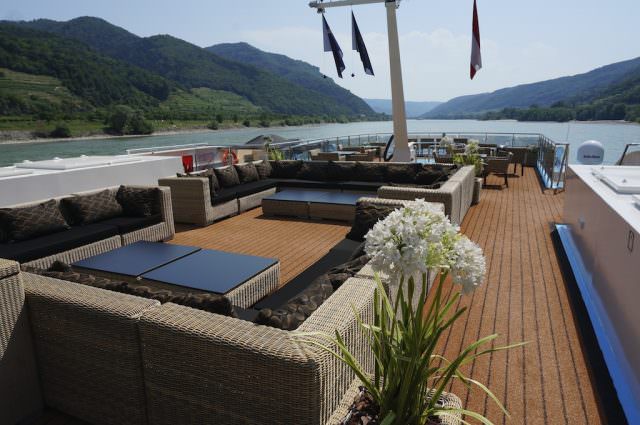 The sun deck aboard AmaWaterways AmaPrima. Not a lot of space for satellite domes … though there is a very small one onboard, upper right. @ 2013 Ralph Grizzle

Because river cruise ships can’t have satellite domes installed on the Sun Deck, they use cellular signals, much like your phone. Now imagine all 140 or so guests want to piggyback onto your phone to post something to Facebook … and the nearest cell tower is miles away. When that happens, speed suffers.

The Slightest Breeze Will Cut It Off 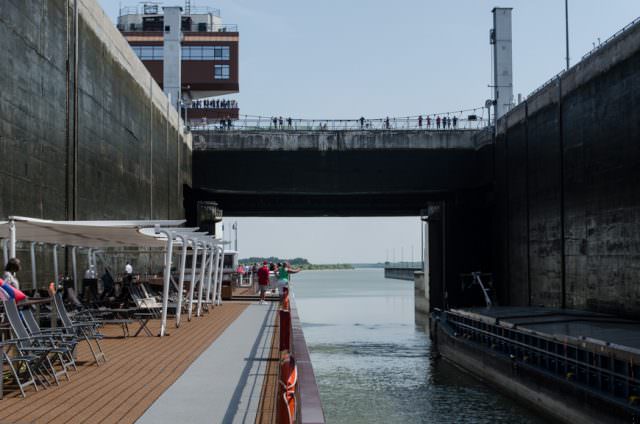 That might be a bit of an exaggeration, but in many ways, it’s accurate. The rivers of the world are filled with obstacles that can either reduce connection speeds dramatically or cut your signal off altogether.

In Europe, the biggest obstacle to internet connectivity are the numerous locks that line rivers like the Danube. This is particularly true along the Main-Danube Canal, which features 16 locks in fairly quick succession. These can be up to 82 feet deep; a height that pretty much guarantees you’re going to lose your internet connection. For those of us that have to work while we’re on our river cruises, you’ll see us frantically saving our online work the second we see a lock coming. 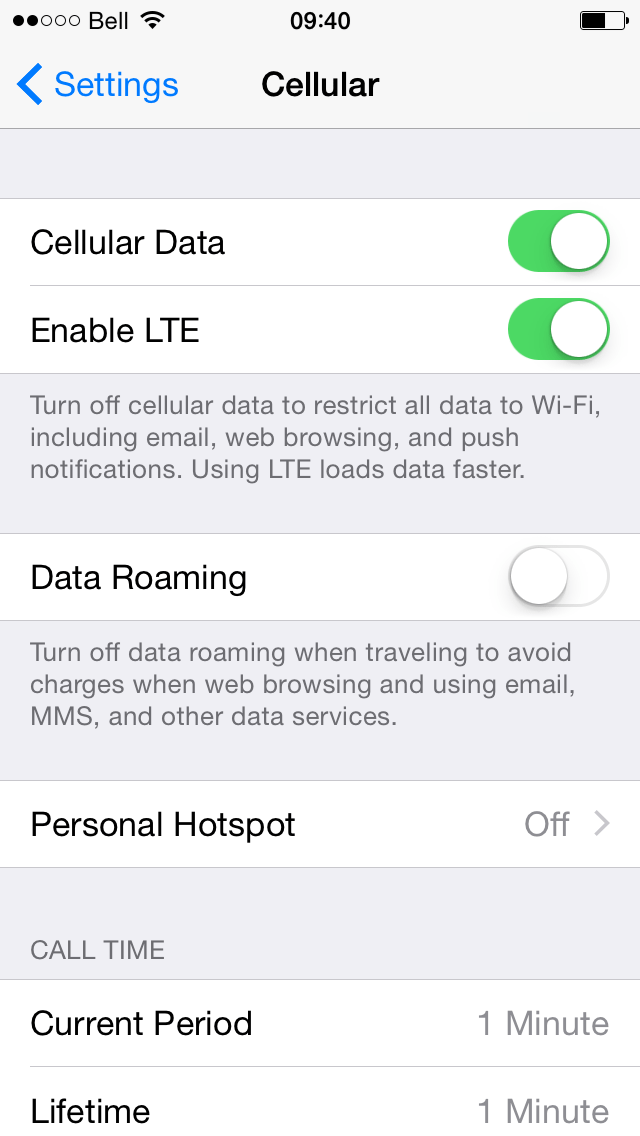 The “Cellular” tab nestled within “Settings” on an iPhone. Unless you want to pay through the nose for your data plan, it’s a good idea to turn Cellular Data off unless you absolutely must access the internet via your phone. Even with WiFi enabled, the phone will pick your cellular data plan over the Wi-Fi.

The big one that’s likely to snare most people: WiFi internet access and Cellular Data are two different things. Even if WiFi is enabled on your iPhone or Smartphone, cellular data will usually override it in the event of a weak or unreliable connection. This means that while you think you’re connecting to the internet over WiFi, you’re actually using up the data plan on your phone. And that can get expensive.

The best solution to this is to ensure that your Cellular Data feature (and especially Data Roaming) is turned off. That forces your phone, for better or for worse, to use the slightly unreliable shipboard WiFi.

If you absolutely must stay connected with your phone while you’re abroad, ask your service provider about their international data and voice packages. Doing so in advance can save you from some nasty financial surprises upon your return.

There Is No Guarantee It Will Work

Remote destinations like the Mekong are beautiful, but may pose a challenge for the internet-addicted. Photo © 2013 Aaron Saunders

When I sailed the Mekong a few years back, my ship was advertised as having complimentary WiFi internet access. And it did; the ship boasted WiFi in the public rooms and even featured a handful of computer workstations just forward of the main lounge.

There was just one problem: It didn’t work.

Yes, the WiFi signal showed up and I was able to connect, but that’s it. Simply loading Gmail proved to be too much of a strain for the system. In seven days, I managed to successfully check my email once – and I used that time to send out a mass email stating that I had no internet.

However, it is important to remember: Internet is provided as a convenience. You should never assume that it will work flawlessly, particularly on smaller ship sailing to remote areas of the world where coverage is likely to be less than perfect. This isn’t a hotel on land; this is a moving target.

Not Every Ship Has WiFi … And That’s Okay

Just because a cruise line offers WiFi internet on their European voyages doesn’t necessarily mean that their extended, exotic fleet offers the same. Never assume; always check the brochure or the website first.

There are some lines – like Un-Cruise Adventures – that pride themselves on the fact that they do not offer WiFi internet access on their ships. That’s not a bad thing. In fact, being “disconnected” for a week can actually help improve your cruise experience by forcing you to relax and focus on the journey that is happening all around you.

Consider Whether You Need It In The First Place 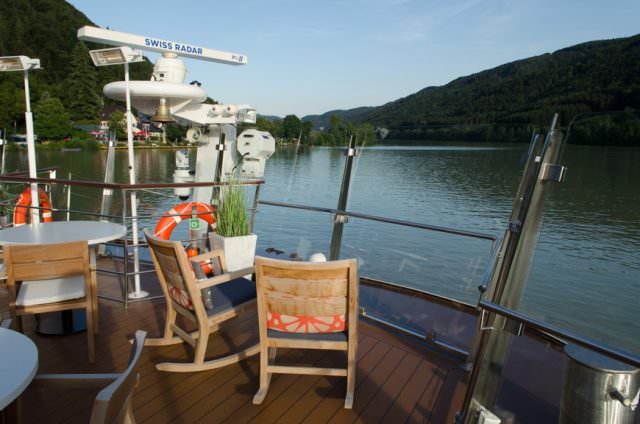 Rather than worrying about the internet, sit back and enjoy the view. Photo © 2015 Aaron Saunders

Do you really need to be connected? If you’re self-employed, you might need to be. We understand that very well! But if not, it’s a good idea to ask yourself: do I need to connect to Facebook? Do I need to read 10 million emails or play some online game? We’ve seen people torpedo their river cruise vacations because they’re obsessing over the speed and signal strength (or lack thereof) of the shipboard WiFi.

So if you can, use the internet sparingly. Or pop into a local café; most places in Europe are wired to the teeth with broadband internet.