Morning in Bratislava, Evening in Budapest 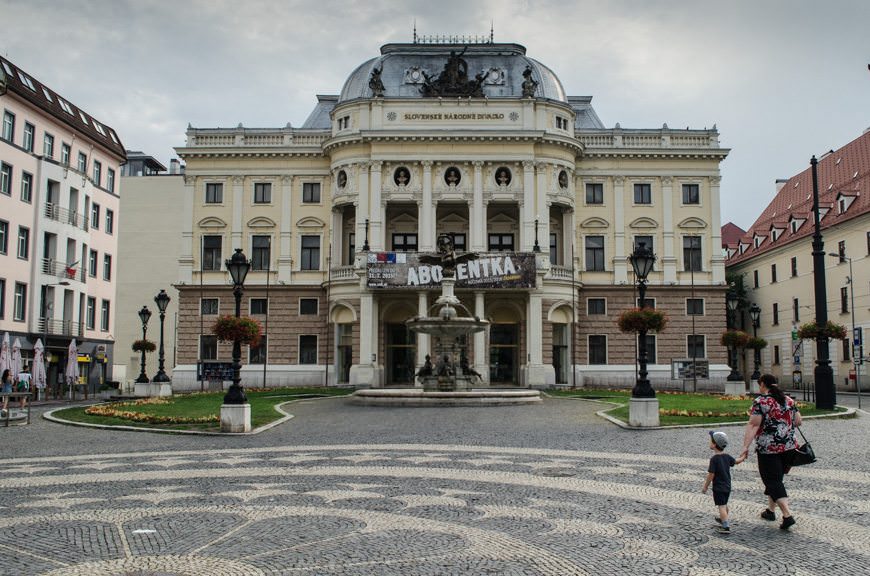 Our Viking River Cruises’ 15-day Grand European Tour aboard Viking Lofn is all-too-quickly coming to a close. This is what I realized this morning as I enjoyed yet another breakfast in The Restaurant before heading out to explore the port of our latest adventures. 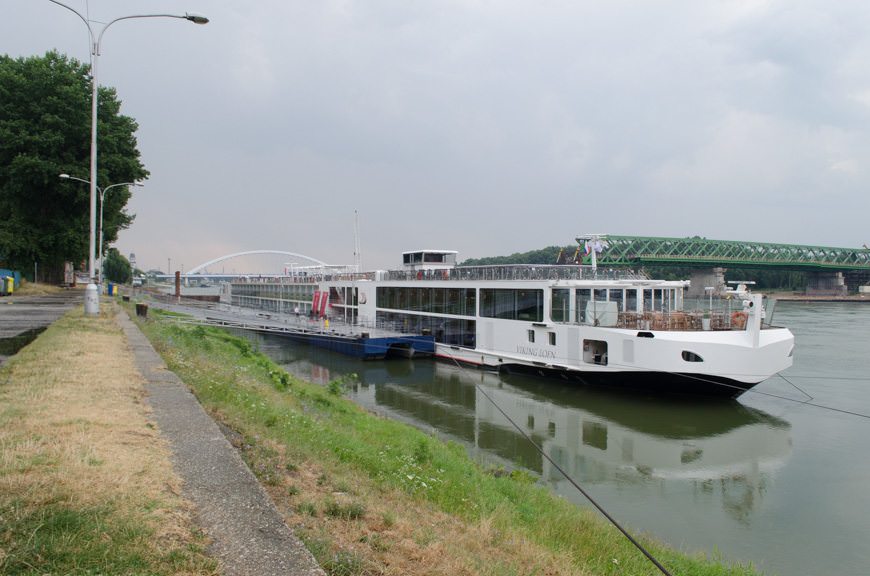 This morning, we docked in Bratislava, Slovakia for a few short hours. To help guests make the most of their time here, Viking once again offered up a comprehensive walking tour of the city in two distinct varieties: normal walking, and “gentle walking” for those who either want to take more time, or who have mobility issues.

If you went through history class before 1993, you probably remember Slovakia better as Czechoslovakia. In fact, Slovakia’s name has changed multiple times over the last century. One hundred years ago, it was known as the Kingdom of Hungary, then the Austro-Hungarian Empire, and then Czechoslovakia after the end of World War I. In World War II, it was temporarily known as the Slovak Republic before once again becoming Czechoslovakia in 1945. 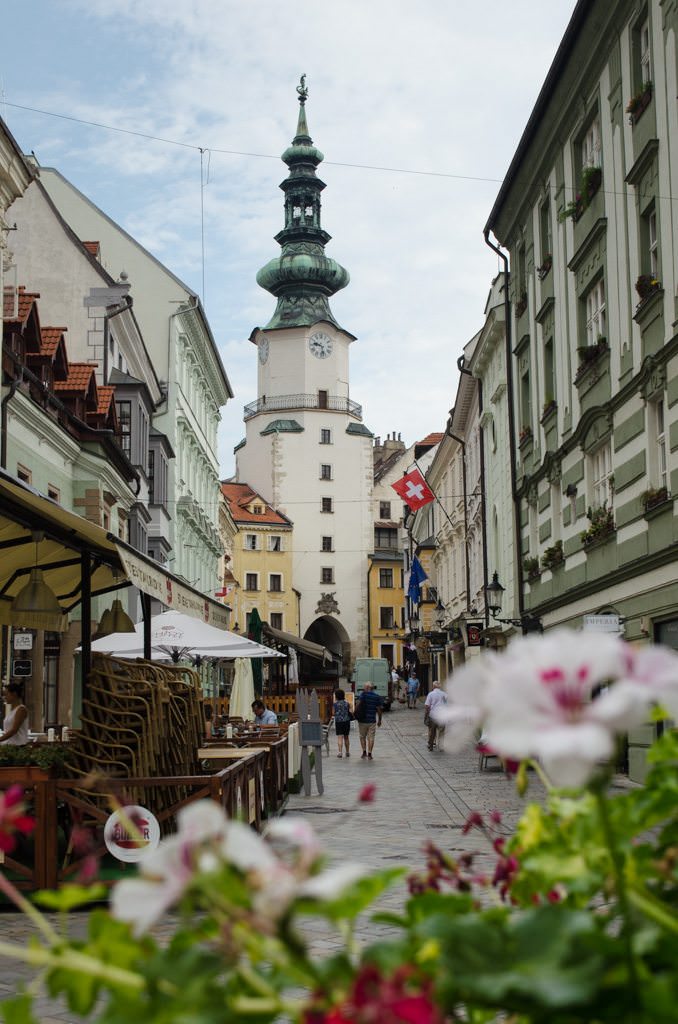 It might be quiet, but Bratislava certainly is pretty in the sleepy hours of morning. Photo © 2015 Aaron Saunders

With all those name changes, it’s no wonder that modern-day Bratislava feels like a bit of an amalgamation of a number of different cultures. It’s easy to see the city as a sleepy, rough-around-the-edges version of Vienna, or maybe Budapest without all the tourists.

Wandering through the streets, however, it quickly becomes apparent that this is a city that comes alive after five o’clock. Or 17:00 hours. We are in Europe, after all. 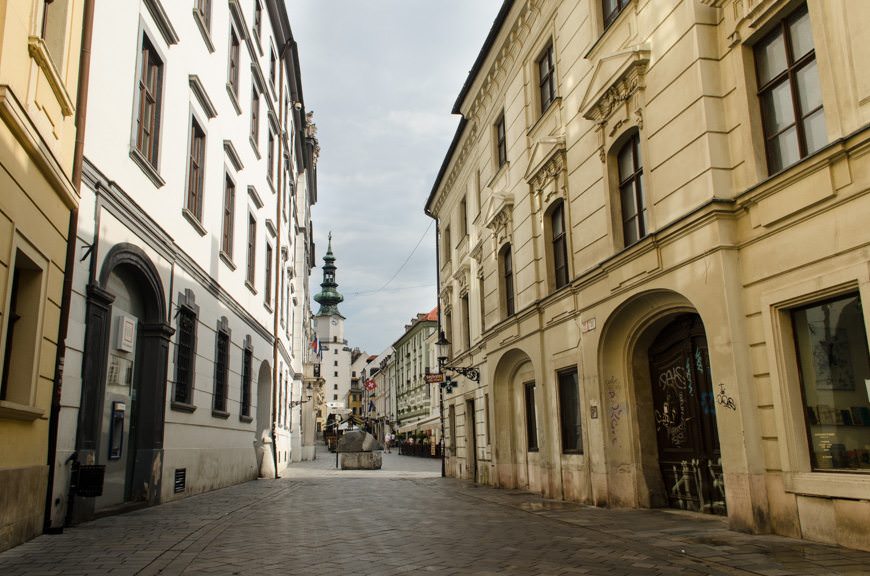 Bratislava is…quiet…in the morning. That changes at night, however. Photo © 2015 Aaron Saunders

Bratislava’s bar-to-person ratio is positively generous. There’s Irish Pubs, Slovakian pubs, pubs done up to look like Moulin Rouge, pubs that mimic a Mexican cantina…if you can think of a type of bar, chances are good that Bratislava’s got it.

Which made our early-morning call a little perplexing. With an all-aboard time of 11:15 a.m., very little – if anything – was actually open. Most shops didn’t open until 10:00 a.m., while a few coffee houses opened their doors at 9:00 a.m. Except for McDonalds. That was open early, if that’s your thing. 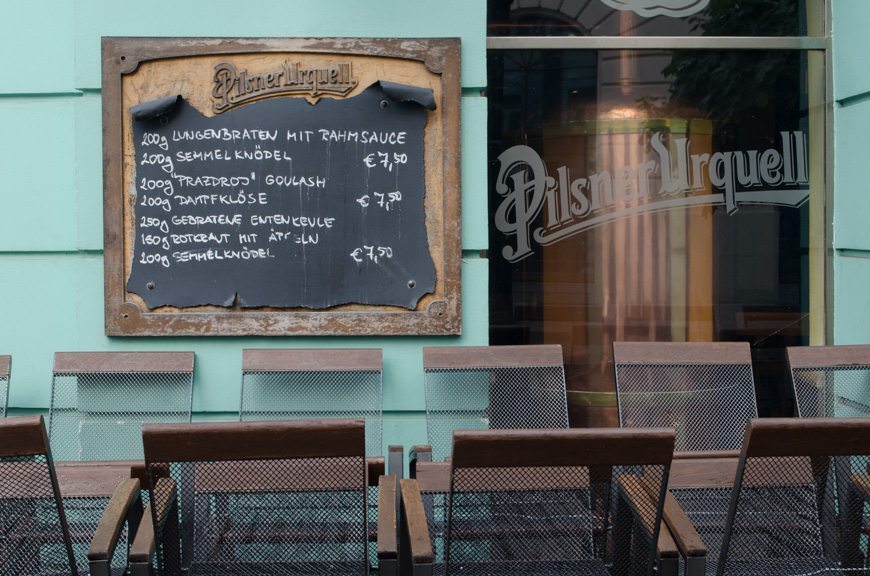 Slovakia is known for its fantastic beers, and there’s no shortage of places to enjoy them here. Photo © 2015 Aaron Saunders

Of course, I know why we stopped here: to give guests a chance to explore another country and another city. And Bratislava is most certainly a great city, but it really isn’t at its best first thing in the morning. It’s a bit like that one friend everyone has: great to party with at night, but a terrible bore in the morning while they try to recover from the last evening. 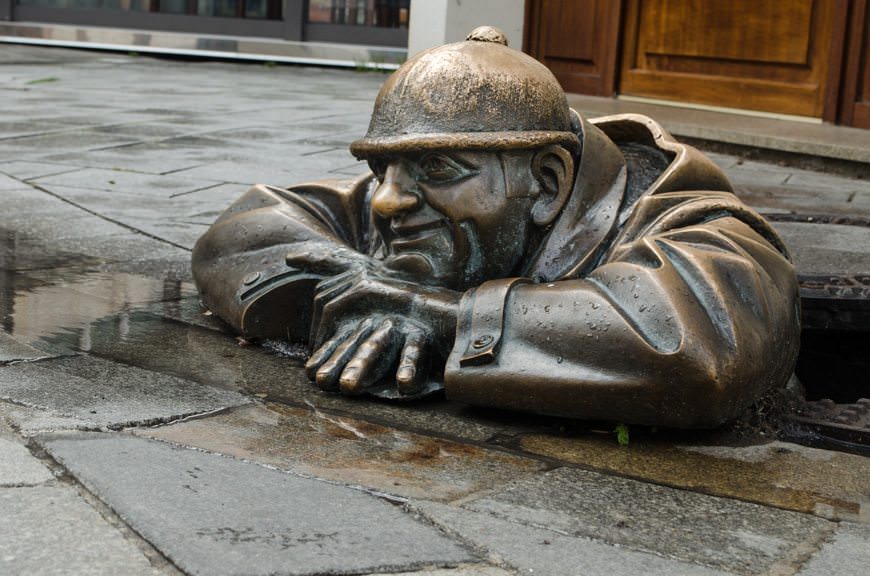 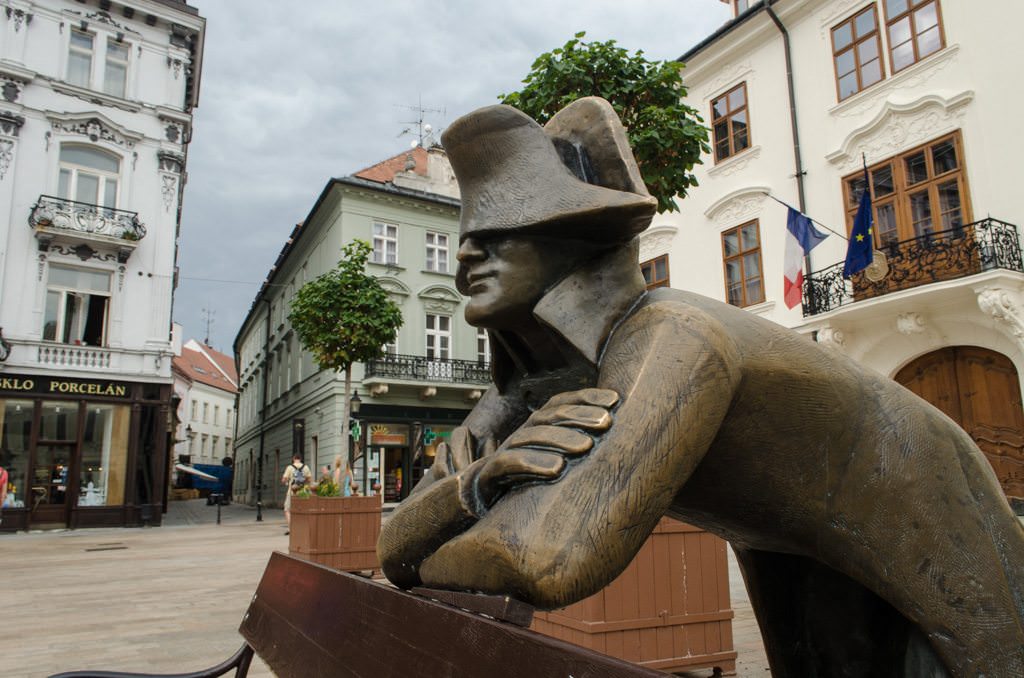 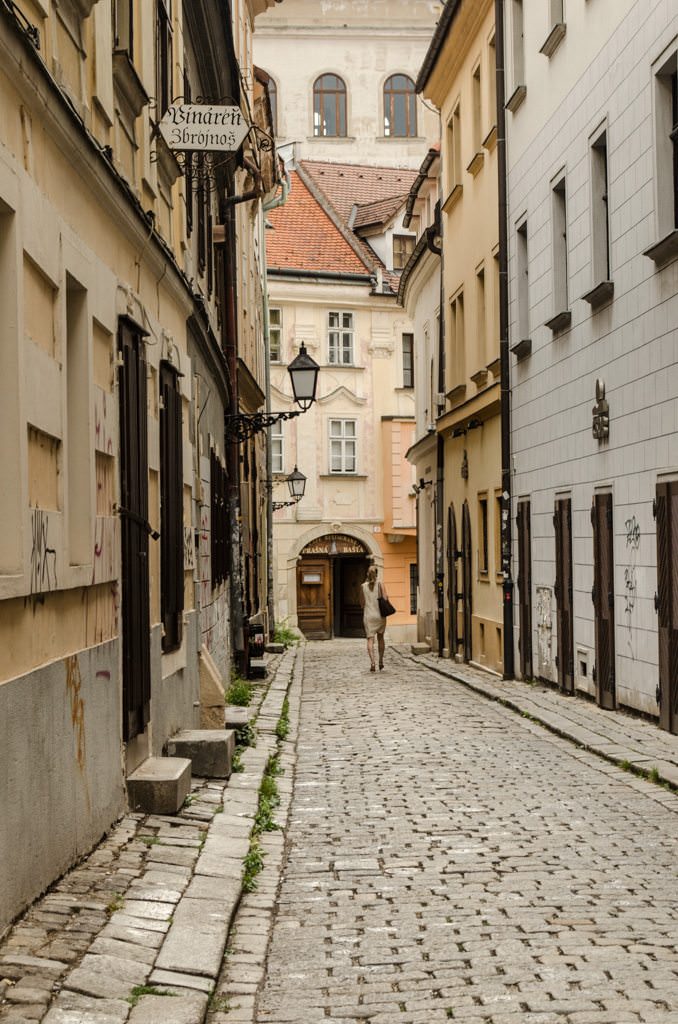 Get lost in the quiet streets of Bratislava. Photo © 2015 Aaron Saunders

So, without the burning desire to enjoy a Slovakian McMuffin (why does that sound wrong?), I wasn’t able to contribute to the local economy at all this morning. I returned to the ship, made myself a cappuccino at one of Viking Lofn’s two incredible automated coffee machines, and sat down to do some work.

Our afternoon of scenic cruising through the searing heat wave that is currently gripping Central Europe was punctuated only once with an event that everyone assembled on the upper Sun Deck to see: the transit of the Gabčíkovo Dam. 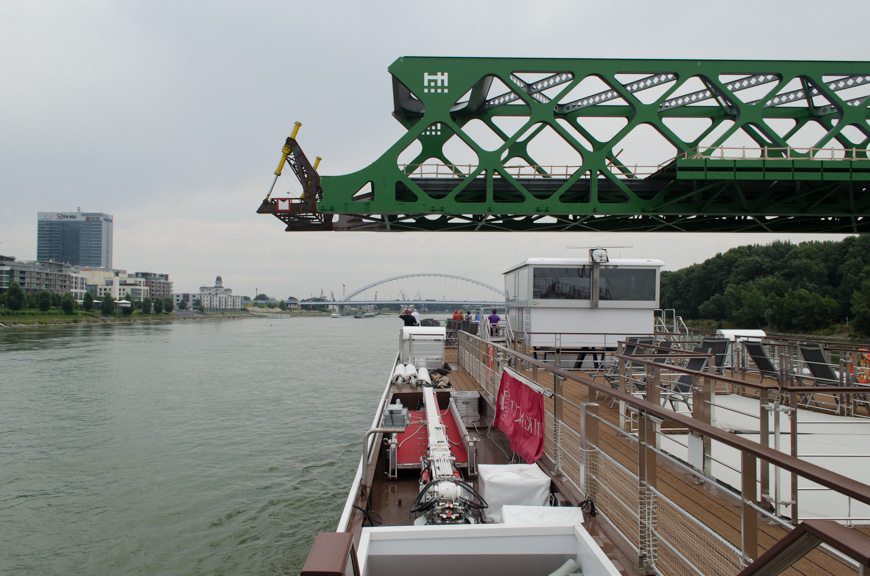 Departure from Bratislava under a half-finished bridge. Photo © 2015 Aaron Saunders

To the casual observer, the Gabčíkovo Dam is just that: a really big dam that encompasses a really big lock that must be transited in order for us to reach Hungary and our ultimate destination of Budapest. Few guests realize, however, what a total boondoggle the entire project is. 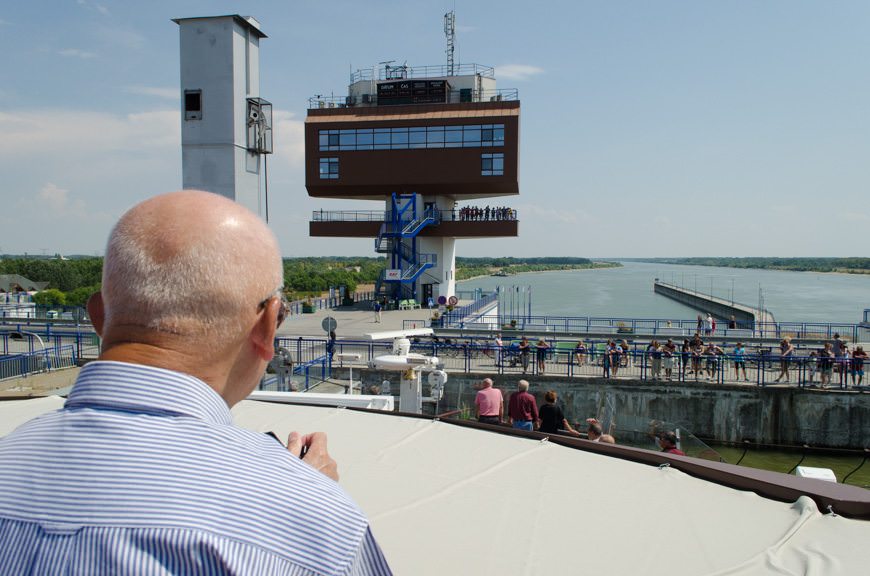 This afternoon, we arrived at the Gabčíkovo Dam. Photo © 2015 Aaron Saunders

Begun in 1977, the joint project between then-Czechoslovakia and Hungary was aimed at improving the navigability of the Danube, producing clean electricity, and preventing catastrophic floods.

By 1981, the project had been frankensteined to the point where Hungary pulled out. Like a jilted lover, Hungary left Czechoslovakia holding the proverbial bag. Faced with completing the project on their own, the country came up with a cryptic sounding solution dubbed “Variant C.” 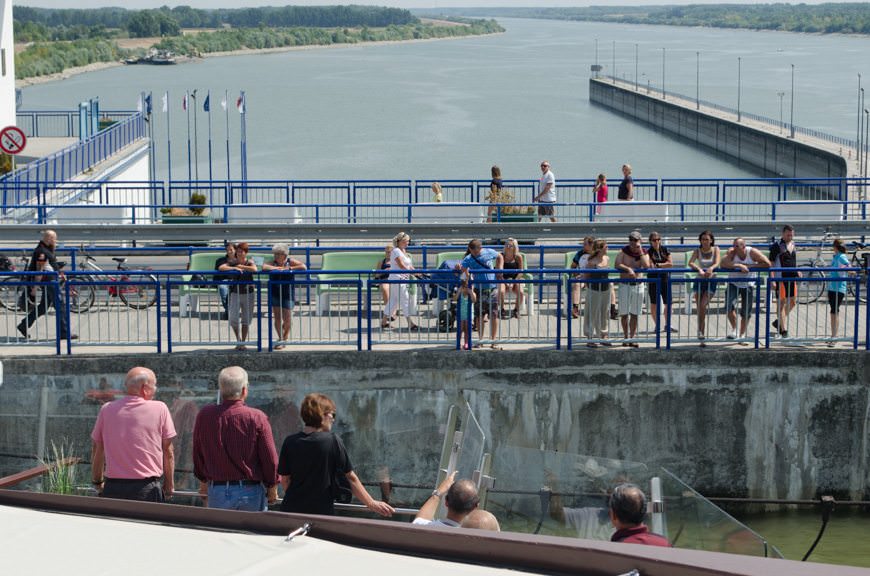 Observers watch from the road as we are lowered 20 metres down in order to continue our journey. Photo © 2015 Aaron Saunders

Like a bad Vincent Price horror movie, “Variant C” diverted the entire freaking Danube into Slovakian territory in order to keep production within their borders. But by diverting the Danube and locking it up, it effectively strangled the water flow on the Hungarian side. Furious, Hungary terminated the 1977 agreement and got out once and for all. The Hungarians would have preferred “Variant D”, which called for a complete removal of all previously-built structures and a return to the previous state of the Danube.

In all, it took 19 years to complete the project, which was finished in 1996. 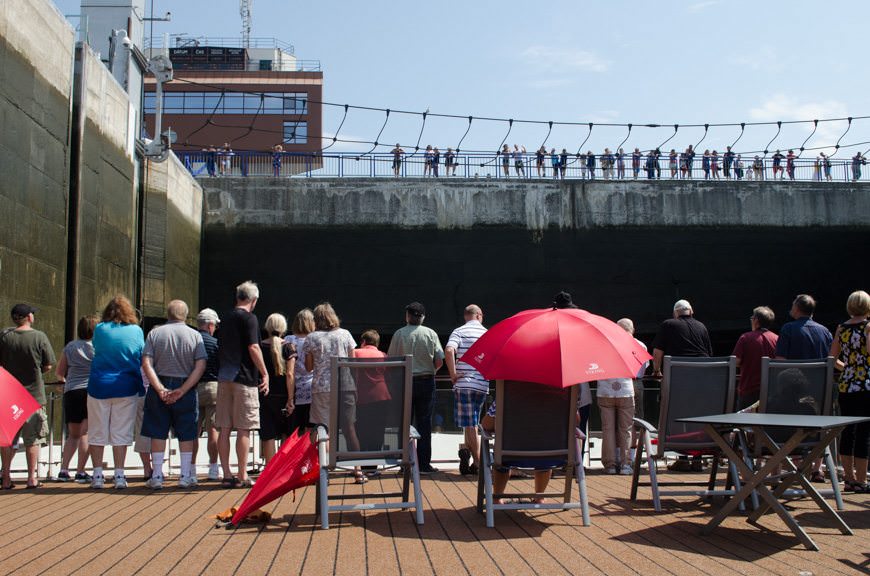 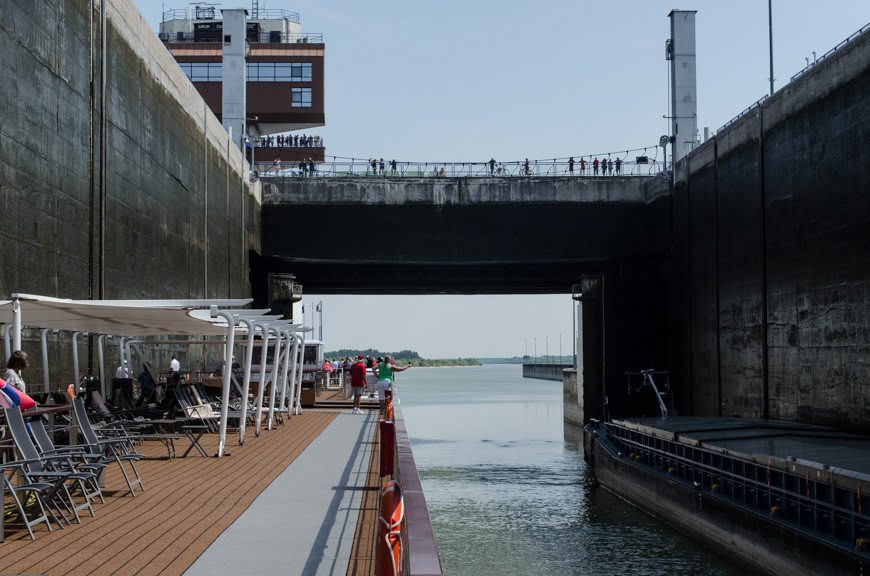 The Gabčíkovo Dam, however, serves an excellent purpose: it allows river cruise ships to descend (or ascend, depending on direction) the 20 metre height difference that separates the left and right banks of the Danube. Its powerplant produces 2560 GWh of power annually. In two decades, the lock has allowed 300,000 ships to pass through, carrying over five million passengers. Actually, make that five million, one hundred and eighty-seven. 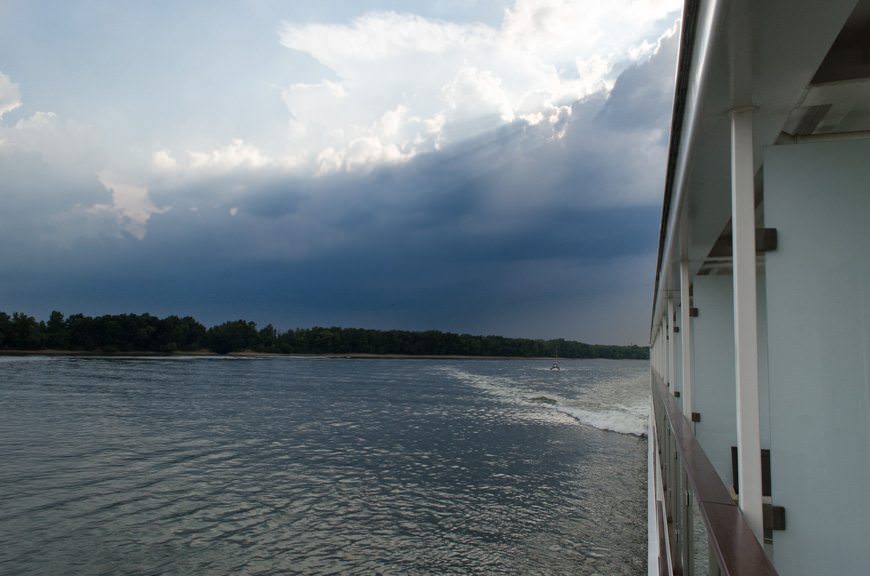 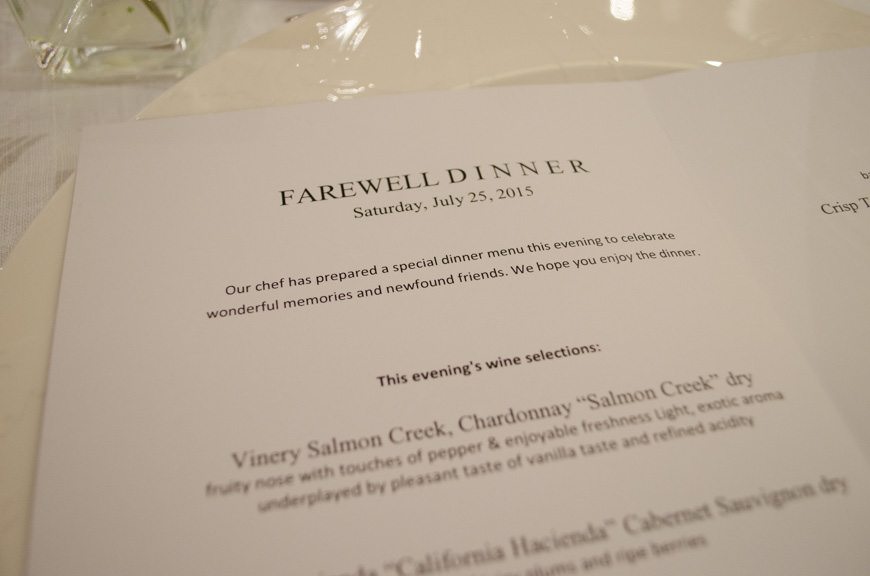 …as we prepared for another great dinner. Photo © 2015 Aaron Saunders

Tonight, we witnessed a fantastic thunderstorm as we ate dinner. Thanks to the floor-to-ceiling windows that line the length of the Restaurant here onboard Viking Lofn, we were treated to an incredible light show as we enjoyed our Captain’s Farewell Dinner feast. 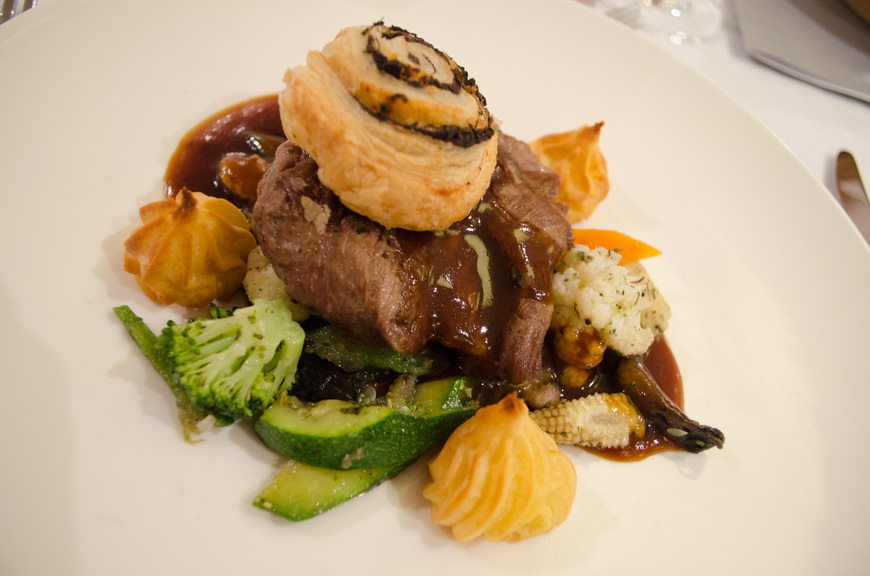 But it was nothing compared to the show that those of us who stayed up past 11:00 p.m. were treated to. Slowly, silently, Viking Lofn sailed into Budapest under the light of a full moon partially obscured by the rapidly parting clouds. The rain had stopped, and a warm summer’s evening greeted us as we sailed past the Hungarian Parliament, Buda Castle, and Budapest’s iconic Chain Bridge.

No matter how many times I sail into Budapest at night, it still makes my heart stop. It’s one of the most breathtakingly pretty cities on the planet – and tomorrow, Viking is giving us the chance to explore it all as our Grand European Tour draws to a close. 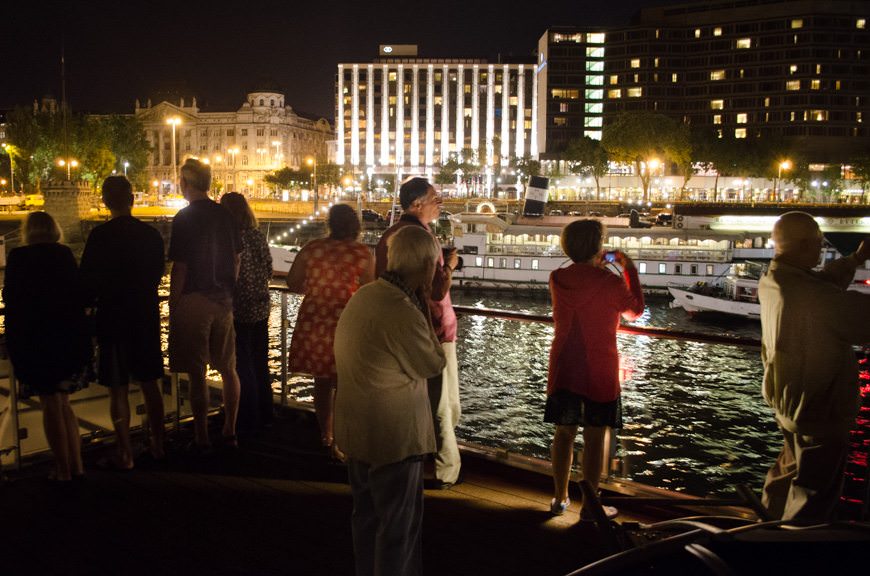 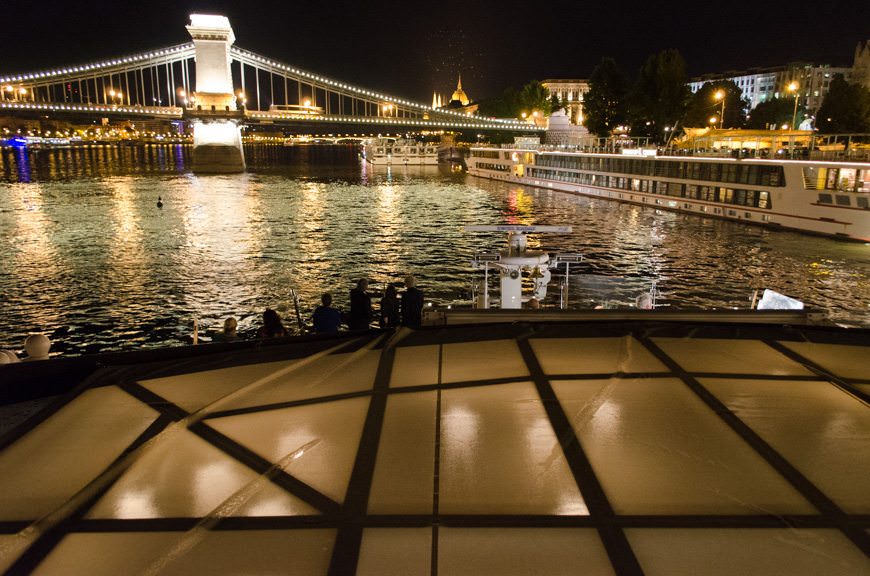 Arriving at our berth next to Viking Legend in the shadow of the Chain Bridge. Viking has some of the best docking space in the city. Photo © 2015 Aaron Saunders 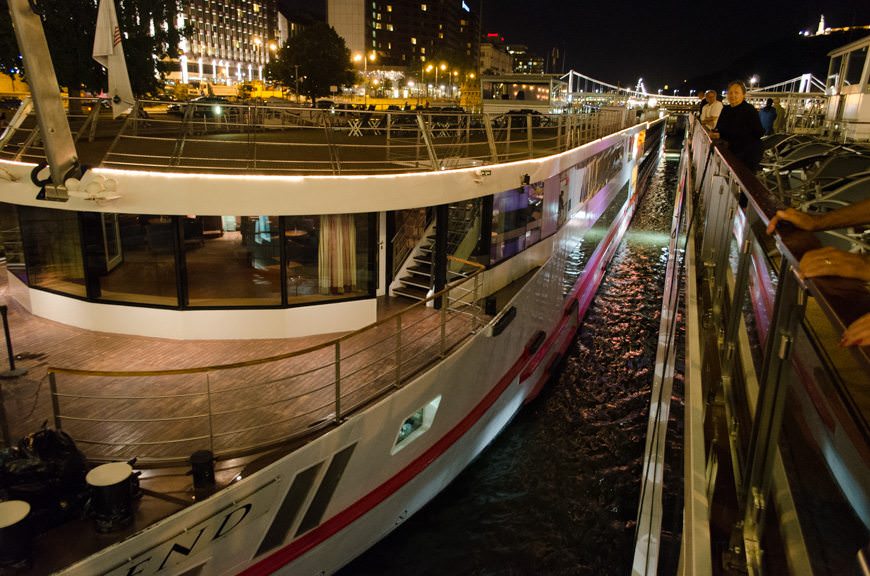 Coming alongside next to Viking Legend. Photo © 2015 Aaron Saunders 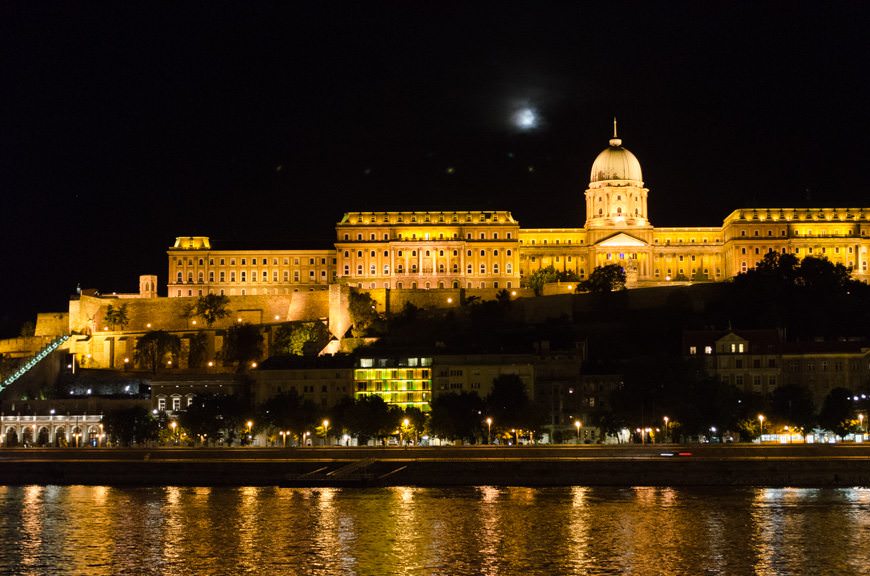 Our Live Voyage Report from onboard Viking River Cruises’ Viking Lofn’s Grand European Tour continues tomorrow from Budapest, Hungary! Be sure to follow along with our adventures on Twitter @deckchairblog.