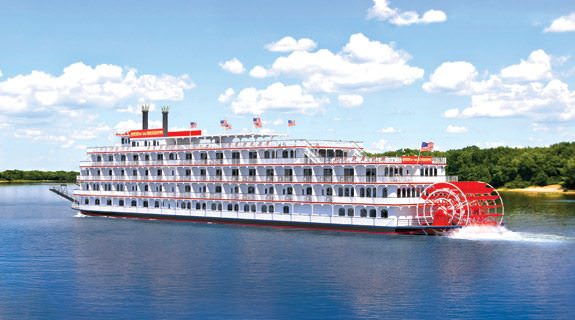 So what’s the name of the new ship, you may wonder? American Cruise Lines has decided to keep the name pretty simple and decided to name the new vessel “America.” As of now, a new name for the Queen of the Mississippi has not been announced. Obviously, it will be something more fitting for her travel on the Columbia and Snake rivers in the Pacific Northwest.

The new America is following the same basic design as other ships in its fleet.  Also a paddlewheeler, the vessel will carry up to 185 passengers. It will be larger than the 150-passenger Queen of the Mississippi.

A New Queen of the Mississippi

Which company is behind the construction of American Cruise Lines’ vessels? The Maryland-based company Chesapeake Shipbuiliding was contracted to build the new ships. The company has been in the industry for more than 30 years and has established itself as a leading designer and expert shipbuilder.

Construction of the new vessels begins in the shipping yard in Salisbury, Maryland where the outer outer shell and structure will be built and the two hull sections joined. Ships will then be moved to the Wicomico River on the Eastern shore of Maryland where the final construction takes place, including the upper decks and the ship’s interior.