Romantic Rothenburg – and A Change of Plans 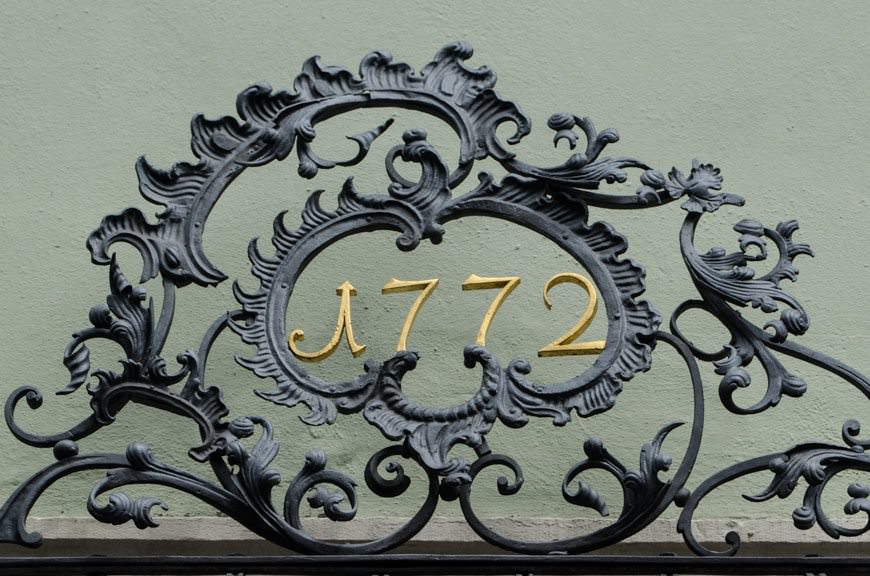 Here, guests once again had two options. The first: partake in the included walking tour of Wurzburg – including the magnificent Residenz Palace, which is recognized as a UNESCO World Heritage Site and one of Germany’s most famous attractions. This would arrive back at the Viking Vidar in time for lunch, after which guests would have free time for the balance of the afternoon until Viking Vidar sails for Bamburg, Germany promptly at 6:30 p.m. 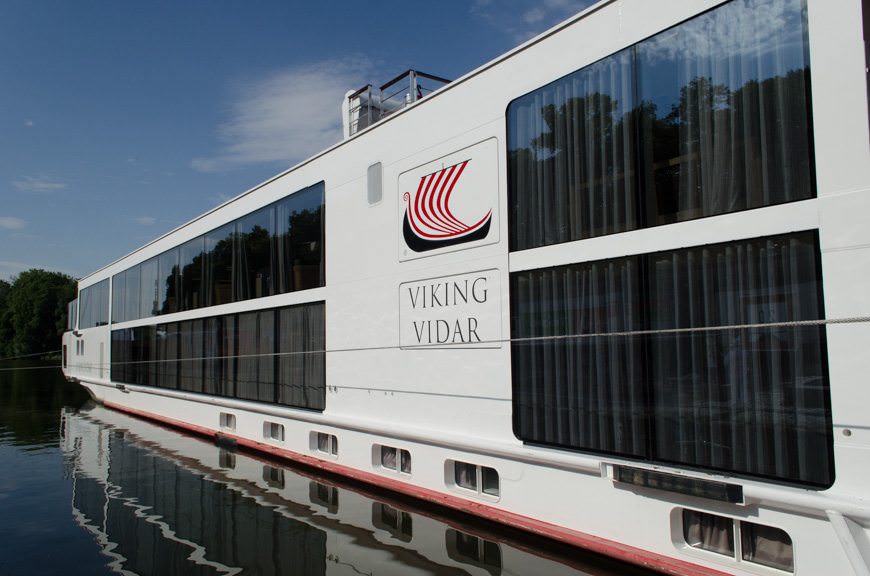 Viking Vidar alongside in Wurzburg, Germany on another beautiful – and hot – day. Photo © 2015 Aaron Saunders

The other option – and the one I chose to take – was the optional excursion to Rothenburg ob der Tauber, or Rothenburg for short. A full-day journey including lunch, this would take us along the so-called “Romantic Road” through the heart of Franconia to the medieval city of Rothenburg for a morning walking tour, an included lunch featuring bratwurst, sauerkraut and Franconian wines, and would also return to Wurzburg to tour the Residenz Palace. For €64 per person, that was a no-brainer for me.

With the mercury expected to hit 33°C, I grabbed two bottles of water at the gangway (complimentary) and placed them in my backpack. That’s one item that should be a must for every river cruiser: a good backpack. In fact, I kind of wish every guest was provided with a backpack (or maybe a tote bag). I know that would be a heck of a cost for Viking to incur, but on the other hand…free advertising! 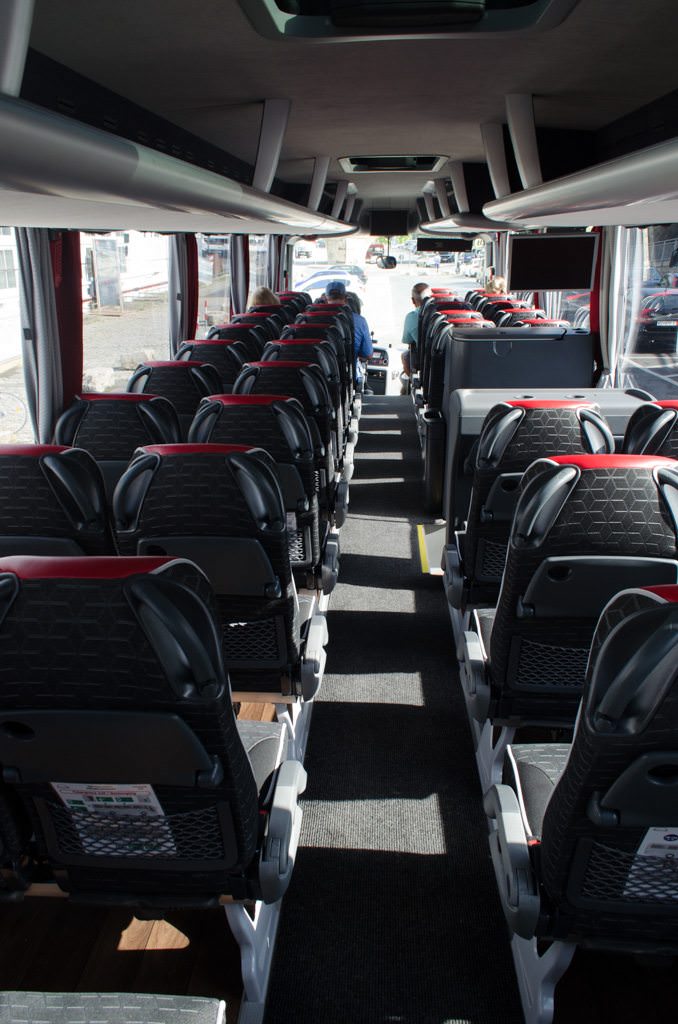 Boarding the coach for our morning tour…Photo © 2015 Aaron Saunders 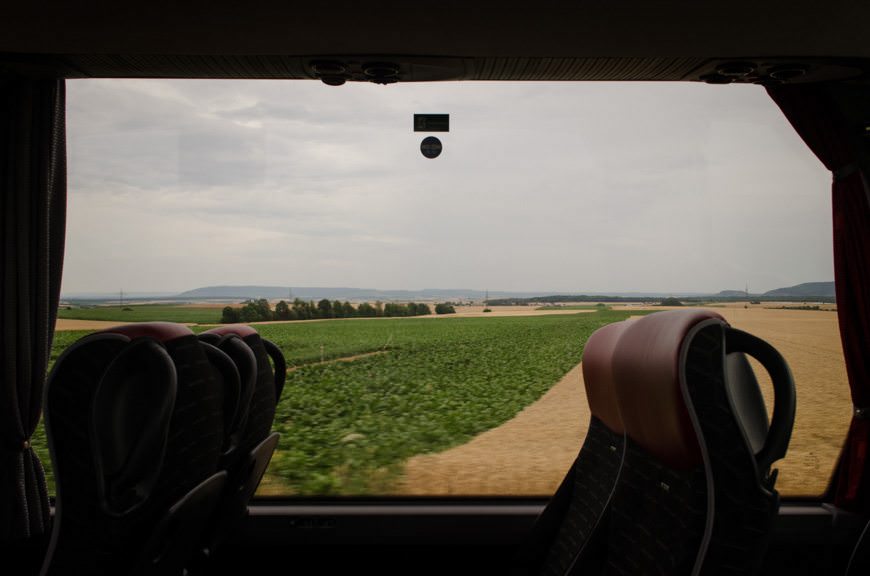 I’m also enjoying the new QuietVox audio headset systems used during tours. Under the old system, you would turn it on, stand as close to your guide as possible, and pray it picked up the right channel frequency. With these new ones (which are utilised by other river cruise operators like high-end tour provider Tauck), you can manually select the channel your guide is on by using a series of small buttons to move the channel up or down. Simple! I hope the balance of the Viking Longship fleet is refitted with these in the months to come.

Rothenburg is actually part of Bavaria, but is often referred to as a Franconian city due to its location in the administrative region of Middle Franconia. It was founded in 1170, and in 1631 was besieged as part of the Thirty Years’ War. The Black Death swept through Rothenburg in 1634, leaving the town empty and virtually bankrupt. With no citizens and no money, Rothenburg simply stopped growing for the next two hundred years. 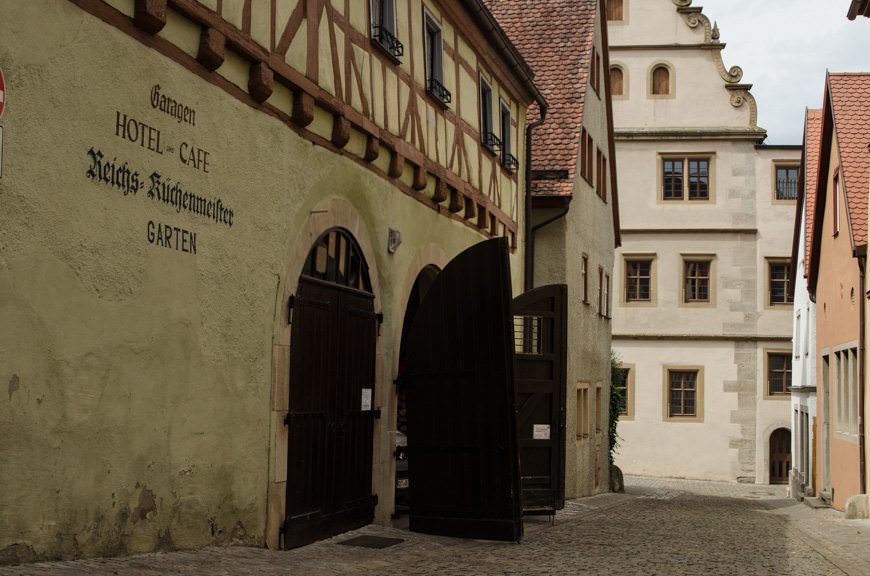 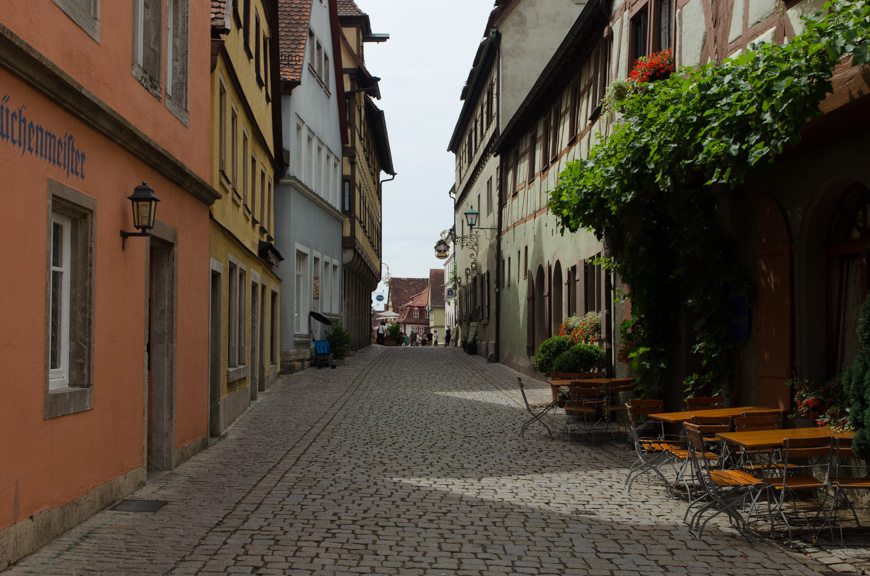 In the 1800’s, artists and painters inspired by the Romanticism movement “rediscovered” Rothenburg, bringing tourists to the village for the first time since the middle ages.

Like many German cities and towns, Rothenburg had a tough go of World War II. For many years, Rothenburg was thought of as the idealized German town, and Adolf Hitler’s Nazi Party grasped that with both hands. Knowing its importance to the Nazi party, the city was bombed in March of 1945 – but a U.S. General knew of the town’s beauty, and ordered a U.S-led party to negotiate the surrender of the town. The local commander of Rothernburg – a major Thommes – gave up the town in defiance of Adolf Hitler’s “scorched earth” decree. And that, in turn, preserved much of Rothenburg. 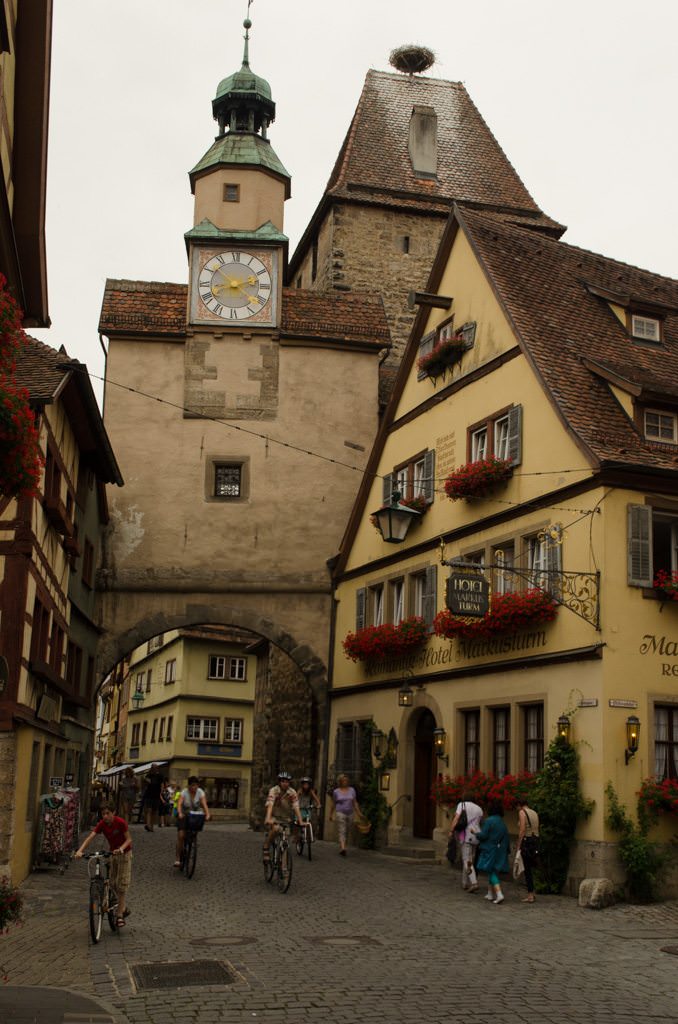 It’s a great thing, too – because Rothenburg really is a quintessential storybook German town; the kind you’d read about in children’s fairytales or see idealized on television. If Walt Disney were German, Rothenburg would be his wet dream. You can get lost in its cobblestone streets and embrace the city’s medieval past. Even the streetlamps – now electric, of course – are designed to resemble the old candle and, later, gas lanterns that would have once lit these same laneways. 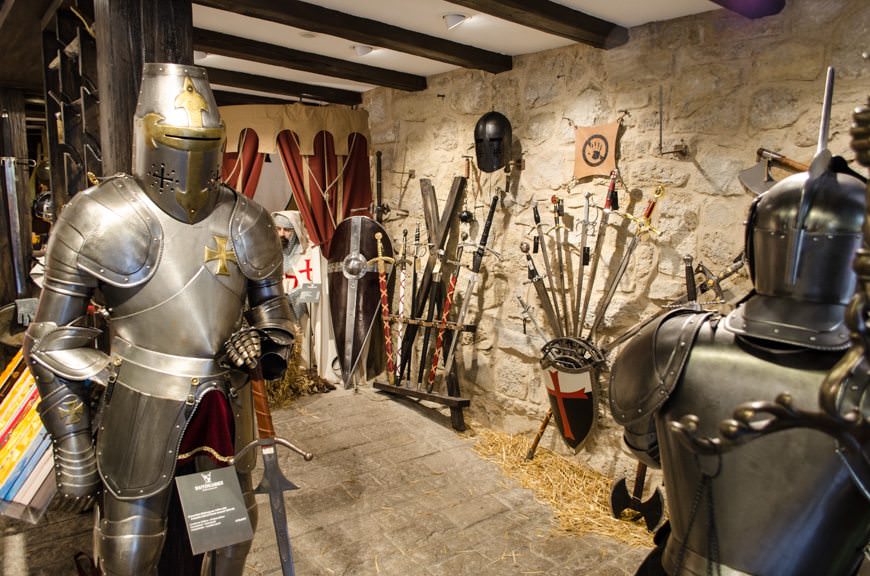 Need a new suit of armor? Waffenkammer can hook you up! Photo © 2015 Aaron Saunders

Rothenburg caters to tourists, sure –but they do it in a way I’ve never seen before. You can, for example, get fitted for your very own suit of armor at the Waffenkammer – a medieval store with authentic swords, chain-metal gloves and clothing, and handcrafted goods. I don’t really want a sword (try getting that through customs!), but it sure was neat to have a walk through. 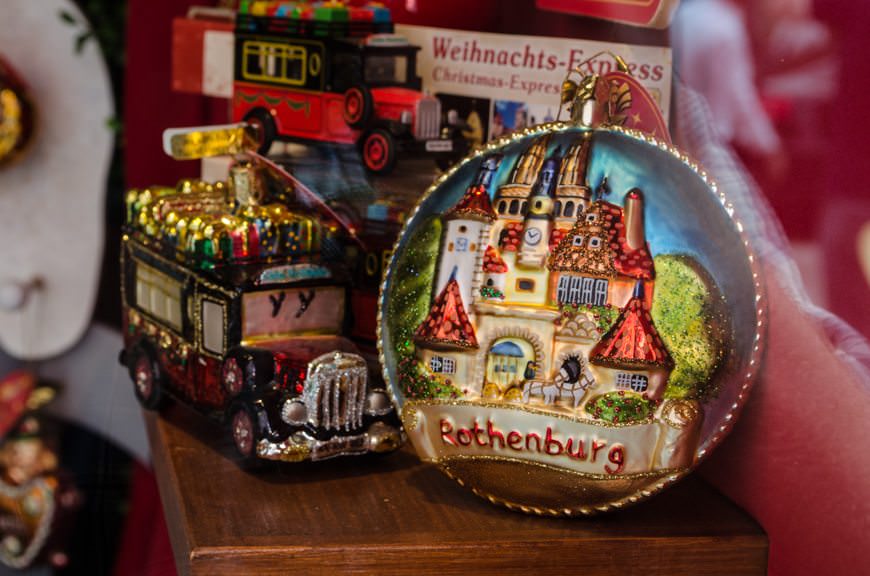 The other Rothenburg institution: Käthe Wohlfahrt – a massive store that makes nothing but hand-crafted Christmas ornaments in (for the most part) traditional German styling. Open all year round, they also have a massive Christmas village on display. I did go in, and I did buy some nice Christmas ornaments that I’m now very pleased to own. They’re located on Herrngasse 1 just off the Marktplatz and the Rathaus (city hall), but you won’t have any difficulty finding Käthe Wohlfahrt: just look for the crowds of people milling about outside the store! 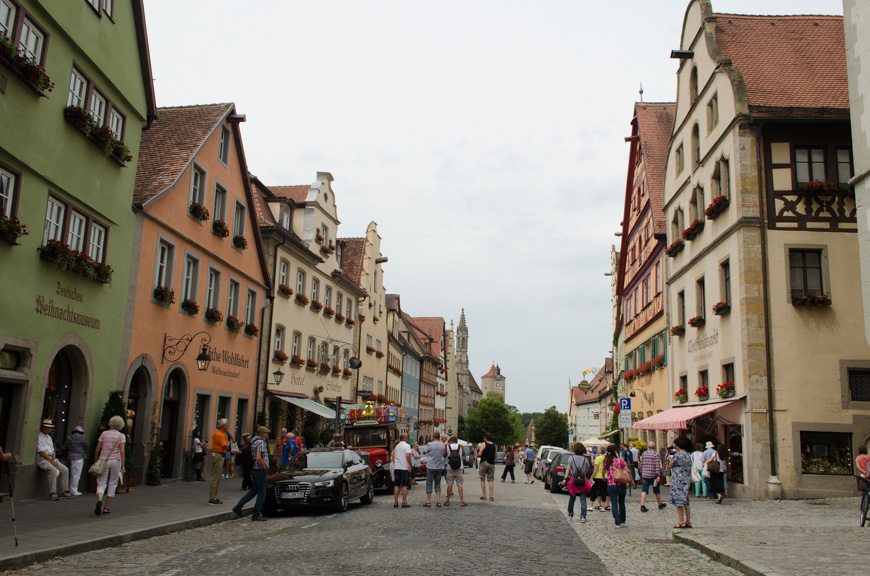 Käthe Wohlfahrt is on the left – and the right! Photo © 2015 Aaron Saunders

There’s also a torture museum, a legal museum (some would suggest they should share the same building), and plenty of local restaurants, cafes and pubs.

Lunch was taken at the powder-blue restaurant and hotel Glocke on Plönlein 1, right by the Siebersturm, or Siebers Tower. We were treated to bratwurst mit sauerkraut, potato soup (delicious) and apple strudel for dessert. Beer is also on the menu, but the town’s main specialty isn’t actually beer – it’s the dry and semi-dry Franconian white wines for which the region is best known for. 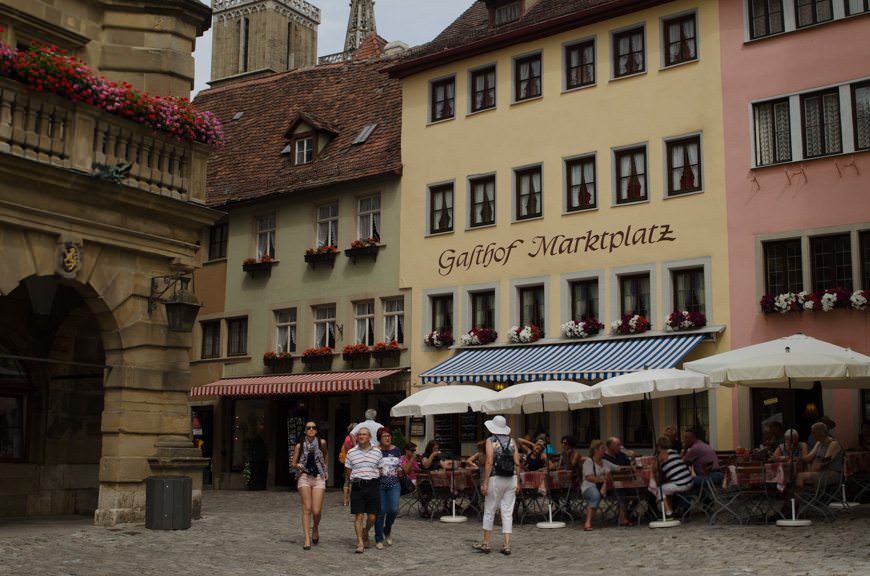 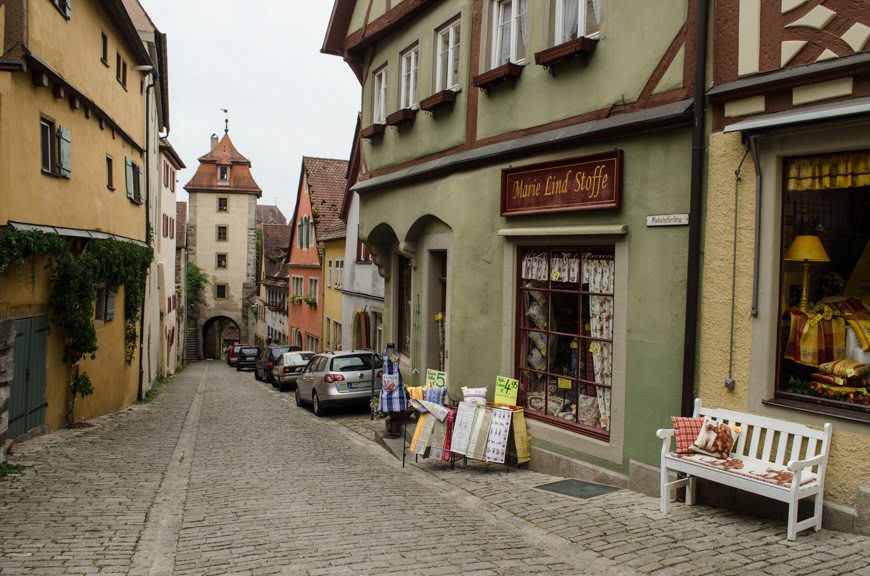 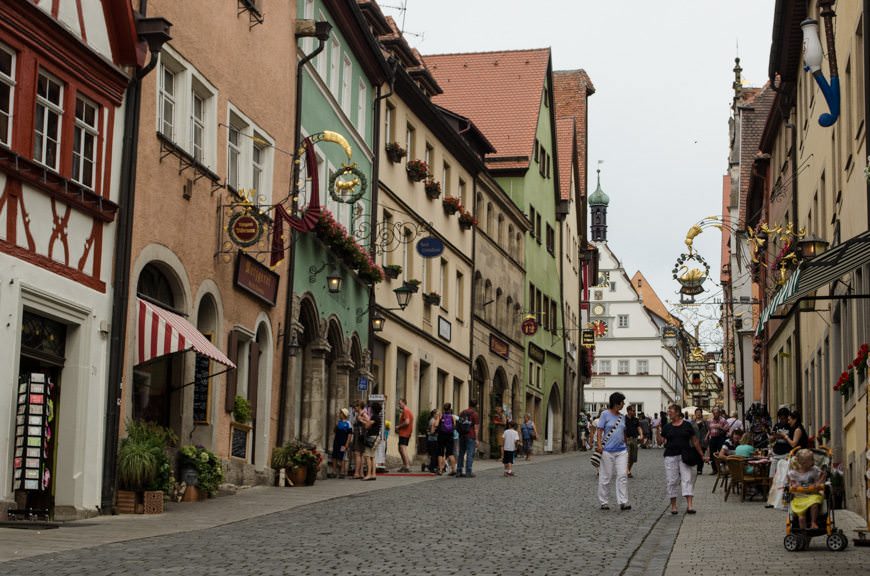 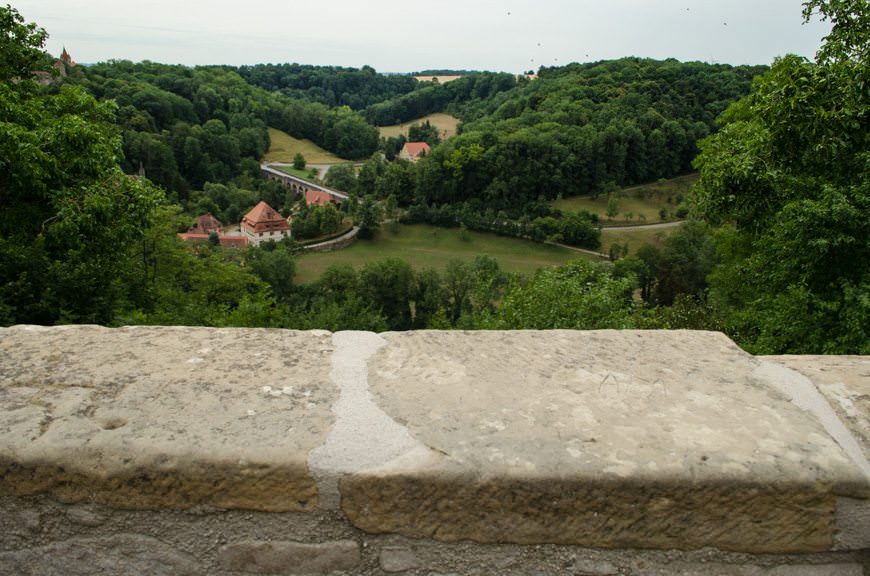 Overlooking the Franconian countryside from a street called Hell. It was named that because of how dangerous this dark, unlit part of town was in the Middle Ages. Photo © 2015 Aaron Saunders

After some free time, it was back on the coach for the 60-minute drive back to Wurzburg. Because photography isn’t allowed in the Palace, I opted to spend some time strolling the streets of Wurzburg as I returned to the Viking Vidar.

Tonight though, we received some unfortunate news: because of the extreme heat and the lack of rain on the European continent these past few weeks, the water levels between Nuremberg and Passau are too low to allow Viking Vidar to pass. 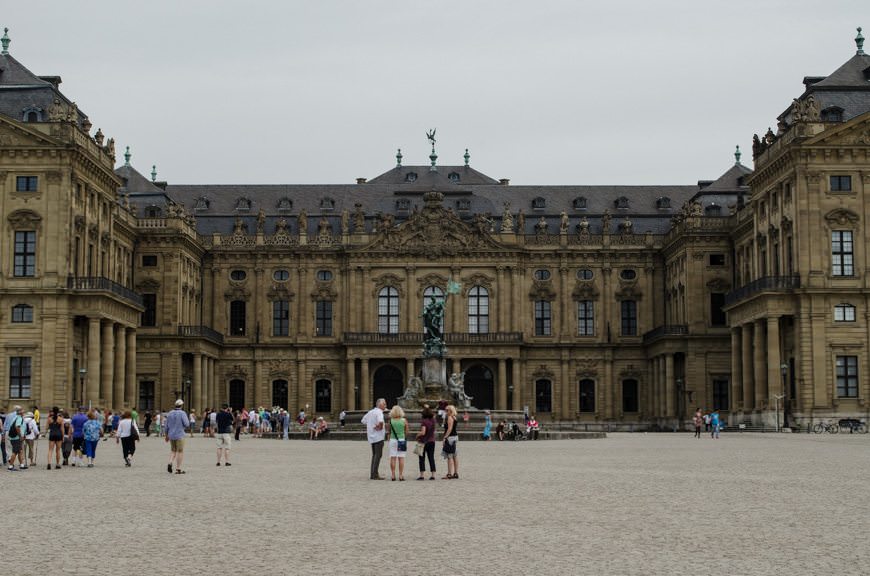 Hotel Manager Thomas joined our Captain and Program Director Henrietta in the Viking Lounge this evening to break the bad news: we have to pack our cases tomorrow evening and place them outside our doors on Monday morning, as we’ll be performing a ship swap.

As of right now, the plan is this: our luggage will be offloaded from the Viking Vidar and trucked down to Passau. We’ll continue with an abbreviated day of exploration in Nuremberg before boarding coaches to Passau, where we will embark the waiting Viking Longship Lofn. 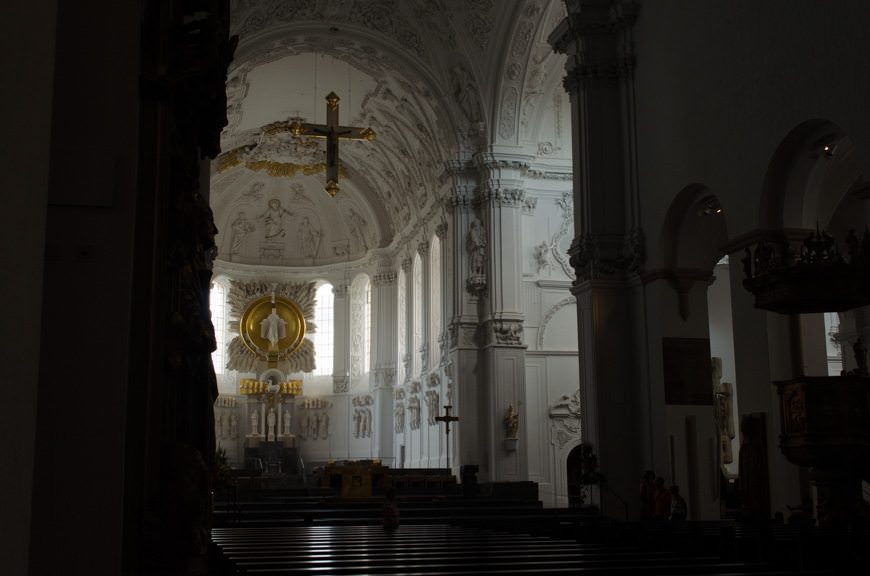 Inside Wurzburg’s Dom St. Kilian, originally constructed in 1040 and burned out in 1945. It took twenty years to restore the church to its original glory. Photo © 2015 Aaron Saunders

A direct sister-ship to Viking Vidar, Viking Lofn was launched in April of this year. She should be fairly identical to Viking Vidar, save for a few décor and artwork changes here and there. And that’s the Viking advantage: with so many nearly-identical Viking Longships, performing a ship-swap in instances of high water has become the preferred Plan B when water levels refuse to cooperate. Other lines aren’t so fortunate: their diverse (and often limited) fleets are such that swapping ships isn’t always possible. The ship you need might not be in the right area, or the one that is cannot accommodate all of the guests.

When that happens, guests get a bus tour. And no one wants that. 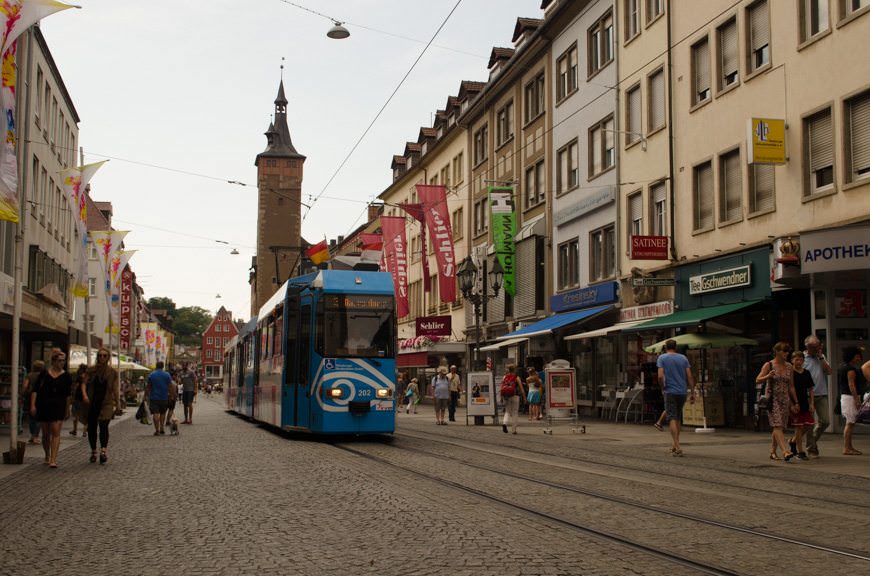 Wurzburg’s Domstrasse, one of the main roads in the historic center of town. Photo © 2015 Aaron Saunders 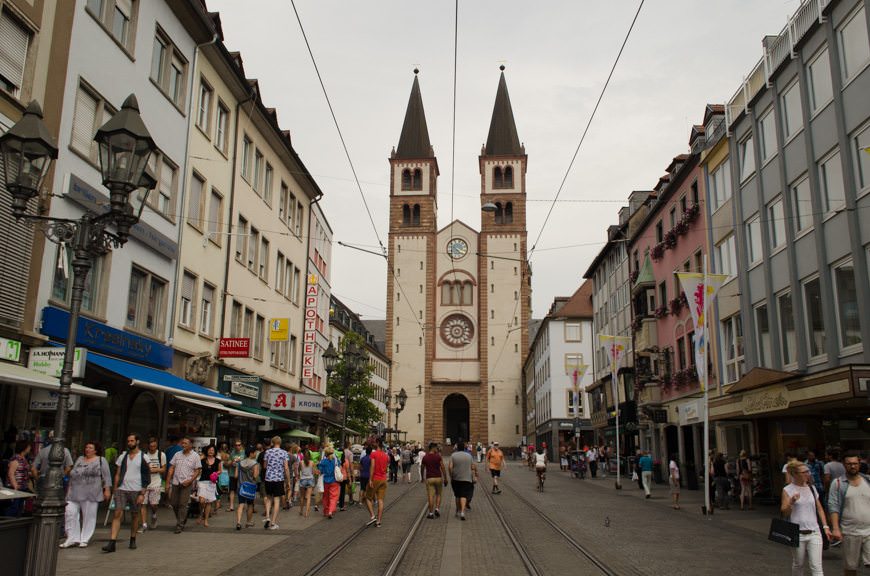 Looking back on the Domstrasse at Dom St. Kilian. Photo © 2015 Aaron Saunders 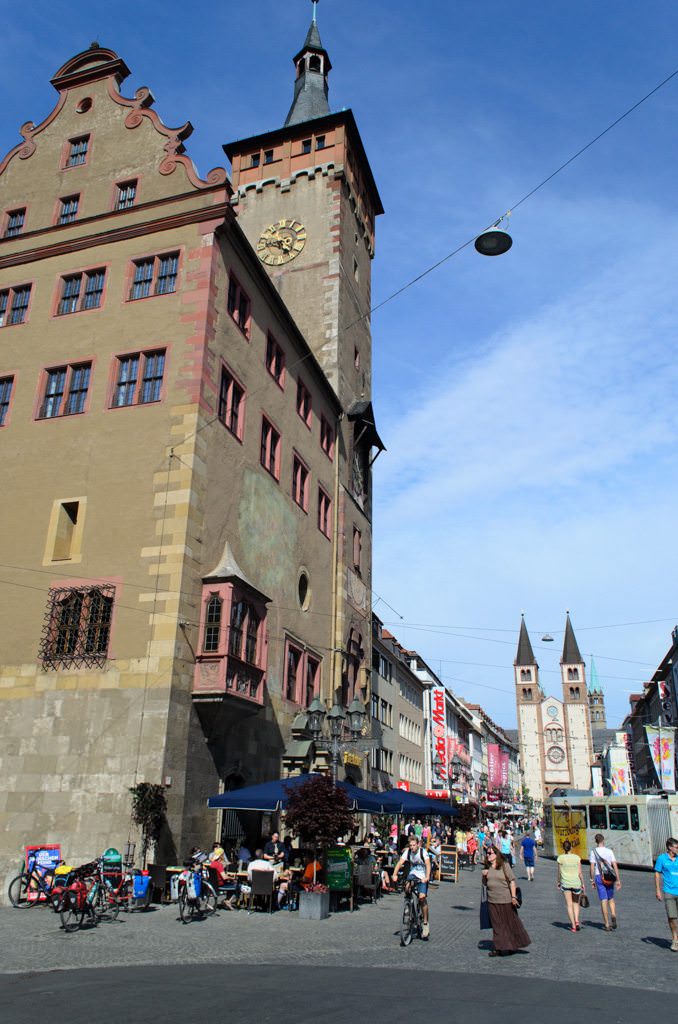 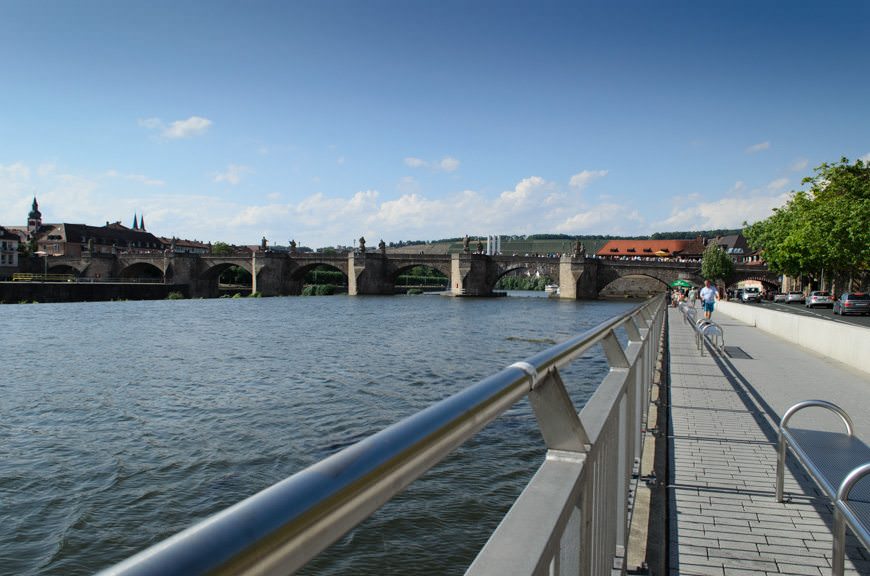 …and it became a very nice evening as I walked back to Viking Vidar. Photo © 2015 Aaron Saunders

A quick scan of the headlines on CruiseCritic tells me we’re on the good end of things: Avalon Waterways was forced to entirely scrap their July 19 “Highlights of Germany” river cruise. Avalon’s a great company, and they do a darn good river cruise – but they just don’t have the ship “muscle” that Viking does. And the sheer number of Viking Longships positioned around the Danube just saved our voyage.

Onboard, I thought the entire thing was handled extremely well. Hotel Director Thomas did a fabulous job of explaining the situation to us, and of controlling the room so it didn’t spiral out of control with the questions we all have. Instead, he answered specific concerns on a one-by-one basis, which added a personal touch to the event and eliminated the mass hysteria that spreads during instances such as this. 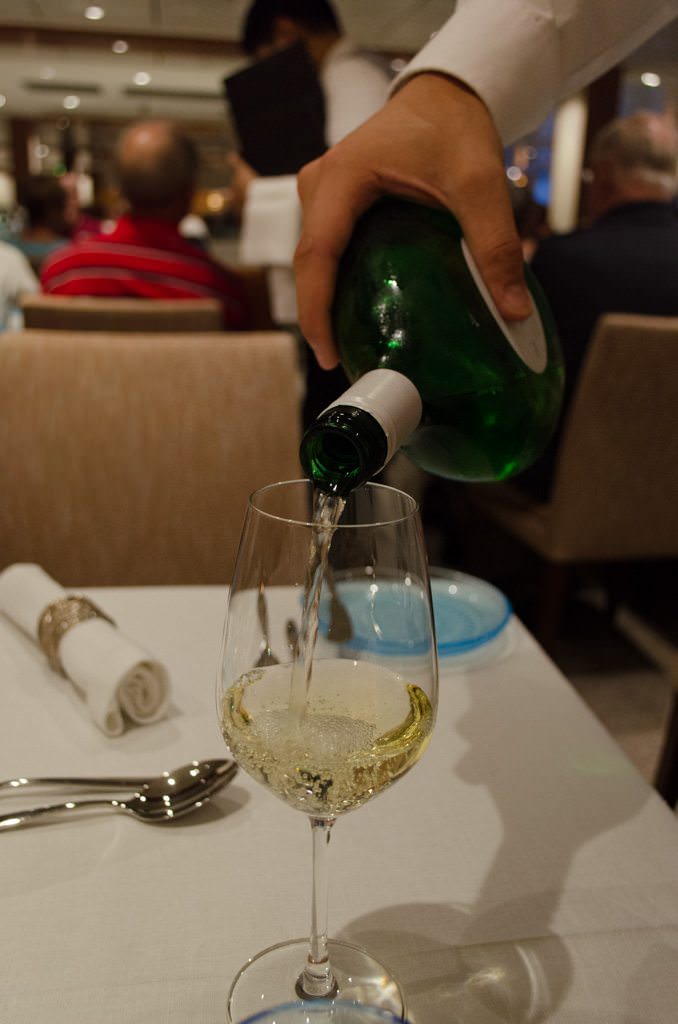 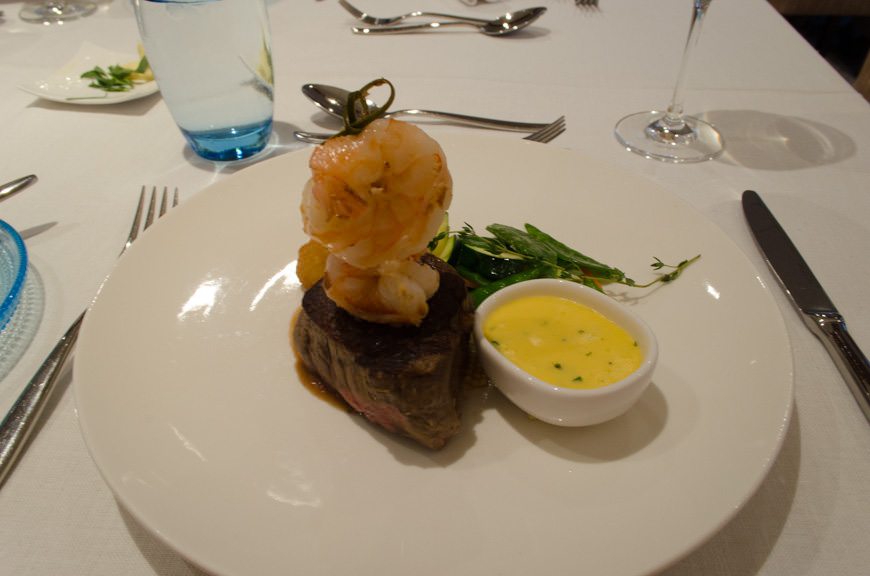 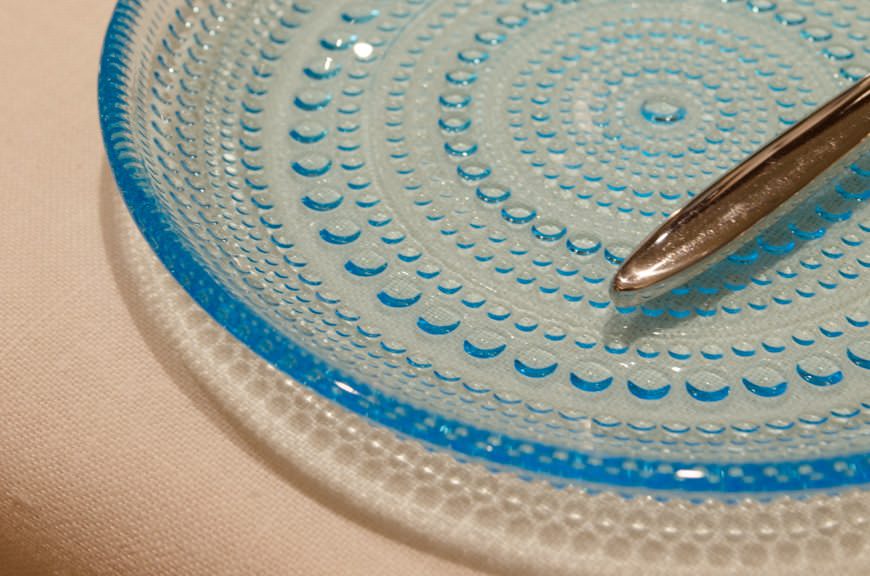 To ensure continuity, Program Director Henrietta and Concierge Sandra will be swapping ships as well, coming with us over to Viking Lofn.

While I’m not thrilled about packing my case again (I just got here on Wednesday!!), I do want to point out something for all those who might be reading this: consider the crew. They’re going to be up late tonight strategizing and arranging coaches for us. They also have to offload everyone’s luggage Monday morning, prepare the ship for new guests, load new luggage, and embark the incoming guests. It’s a full-blown turnaround day – one that no one expected. Henrietta and Sara are being removed from their “home” – because it really is that – and placed on a ship with new staff they haven’t worked with before, just so we’ll be comfortable.

That’s really remarkable and appreciated, but I really feel for the entire crew of the Viking Vidar tonight, who are working so hard to ensure we reach Budapest with the minimal amount of disruptions. 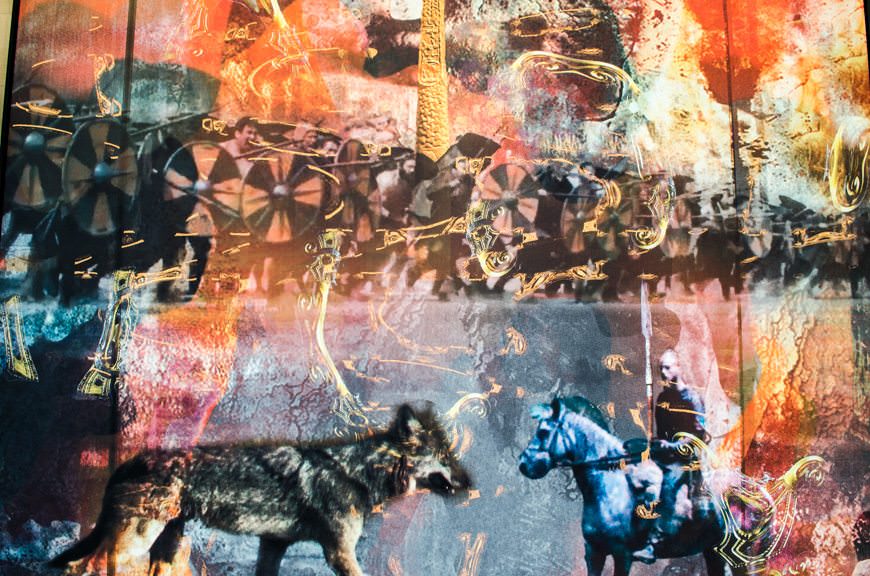 Viking Vidar staircase artwork. Each Viking Longship has their own unique works of art onboard to anchor the main atrium staircase. Photo © 2015 Aaron Saunders

Our Live Voyage Report from onboard Viking River Cruises’ Viking Vidar’s Grand European Tour continues tomorrow from Nuremburg, Germany – and the Viking Lofn in Passau! Be sure to follow along with our adventures on Twitter @deckchairblog.