Stepping Back in Time in Miltenberg 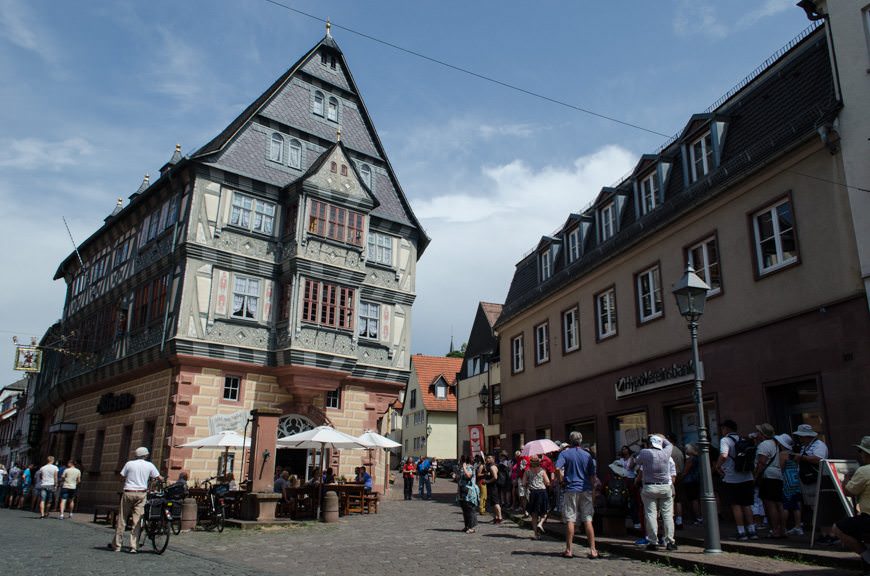 Step back in time in Miltenberg, Germany! The Hotel Zum Riesin – purportedly the oldest Inn in Germany – is on the left. Photo © 2015 Aaron Saunders

A morning of scenic cruising seems to be just what the doctor ordered; most guests arrived down to The Restaurant for breakfast at about the same time I did: 9:00 a.m. River cruising is surprisingly hard work, and it’s nice to see Viking’s itinerary planners recognize this and build in suitable amounts of scenic cruising and free time. 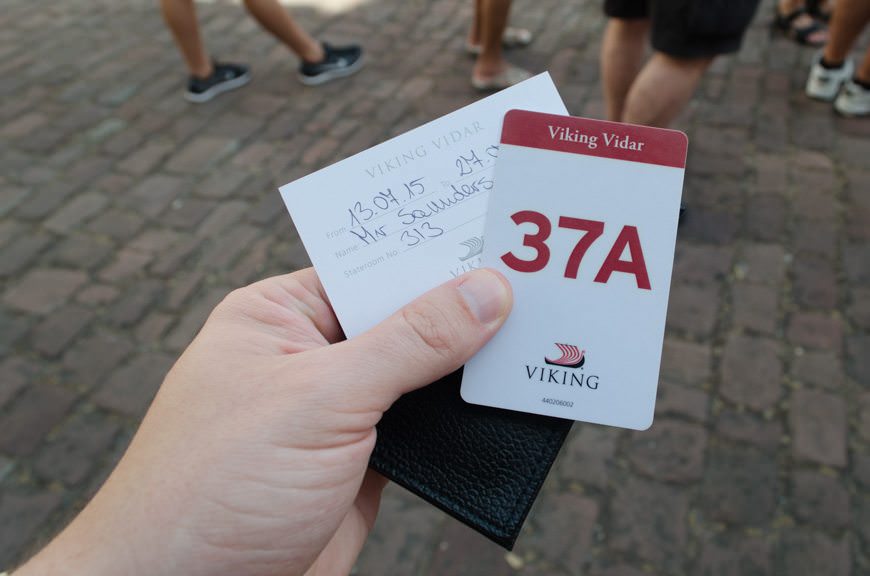 Guests are divided up into groups so that walking tours through town are possible and manageable. Photo © 2015 Aaron Saunders

Miltenberg, Germany – our first port of call along the Main River – crept up on us just after lunchtime, and Viking had planned an afternoon filled with multiple ways to enjoy it.

First up was the standard Walking Tour of Miltenberg. This would feature a leisurely walk around town, followed by free time and then a motorcoach transfer to nearby Wertheim, Germany, where Viking Vidar would sail in the meantime. There was also a Gentle Walkers group set up for guests with mobility difficulties, or those who want to spend more time taking in the sights and less time on the move. 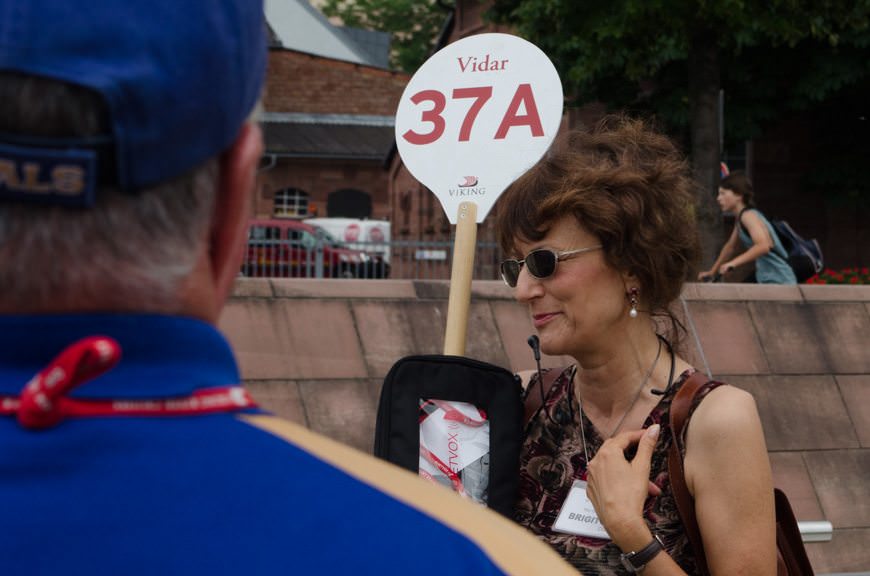 Our local guide in Miltenberg led us on a walking tour of this fairytale town. Photo © 2015 Aaron Saunders

The other option was the Miltenberg Culinary Walk. Available for the very-reasonable cost of €12 per person, this walking tour focused on the culinary heritage of Miltenberg, with visits to a small local brewery, a distillery that makes schnapps, a praline maker and, of course, a local coffee house. Clocking in at just over four hours, this tour also included free time and then the bus transfer back to the ship docked in Wertheim.

I chose to do the regular walking tour – that’s the brilliance of river cruising: there’s always more than one option for how to spend your time. Some guests even decided just to stay onboard the ship itself and enjoy a relaxing afternoon out of the heat! 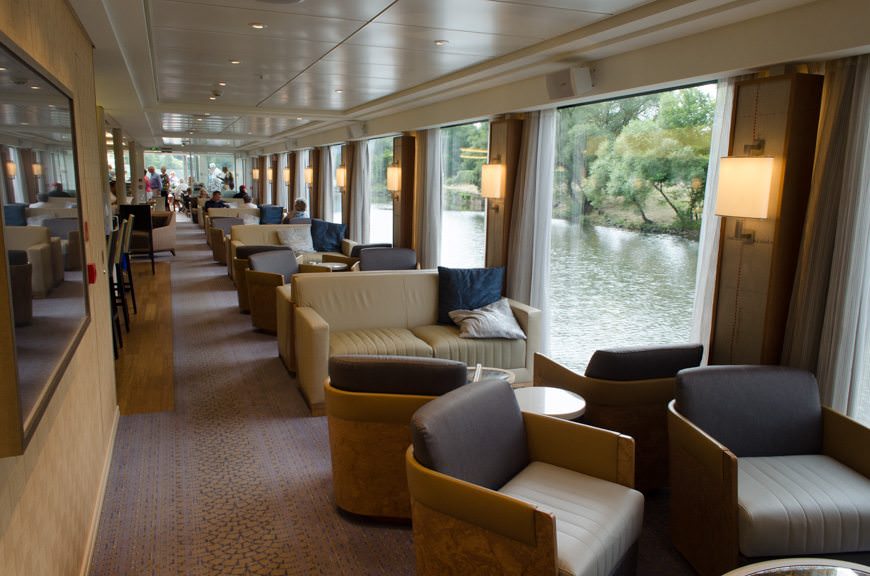 A few guests chose to stay in the air conditioned comfort of the Viking Vidar. I can’t say I blame them – it got HOT! Photo © 2015 Aaron Saunders

This is the part of the story where I normally spool out facts and tell you a lot about a place. Today I want to do something a little different. I’d like to tell you about the feeling here in Miltenberg.

You see, I haven’t felt so good lately. I’ve felt a little burned out. Why? That’s hard to describe. As the Germans would say, I’ve felt a sense of pflichtbewussein – a strong sense of duty to do what I say, and mean what I do. In this line of work, that’s everything. 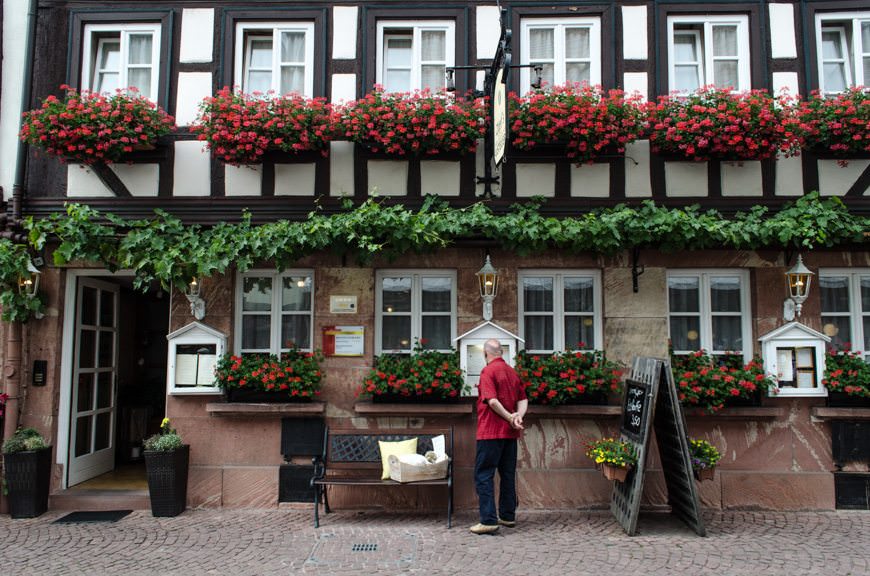 And then, while I sat having a beer at the Hotel Zum Riesin – purportedly the oldest hotel in Germany – I realized something: I have a wonderful life. A magical life filled with wonderful journeys and amazing people. The realization swept over me instantly, and it was overwhelmingly powerful in its simplicity.

I spent nine years of my life in an office job – where I saw nothing but a computer screen. I travelled nowhere, except during my all-too-brief vacation periods. I met no one, save for executive producers who were usually just there to throw their weight around and demonstrate their tenuous importance through a campaign of intimidation, fear and humiliation. 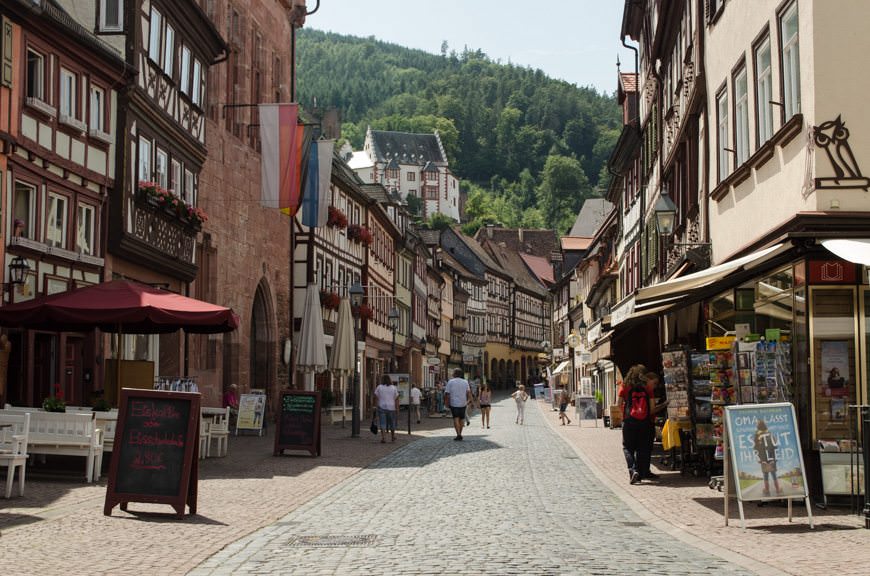 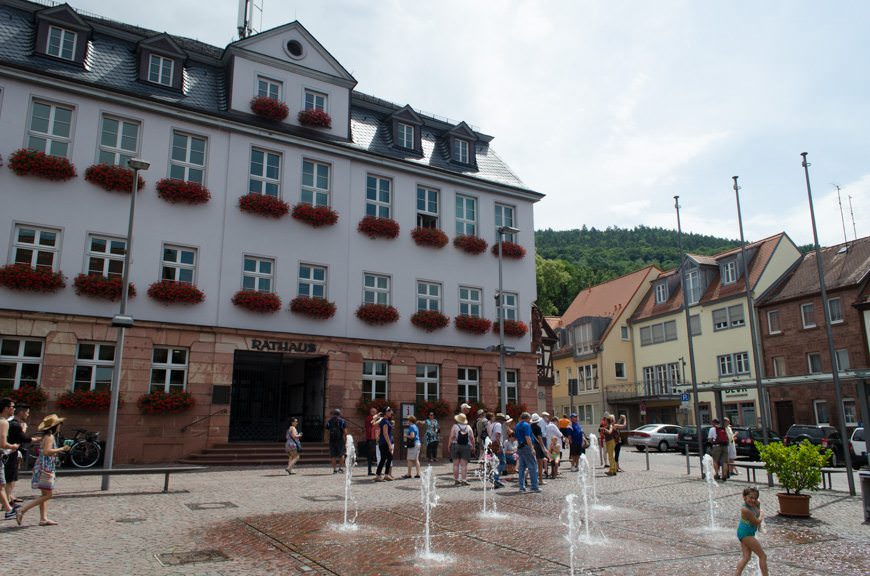 Kids (and adults) cool off in the waterpark outside of the Rathaus, or City Hall. Photo © 2015 Aaron Saunders 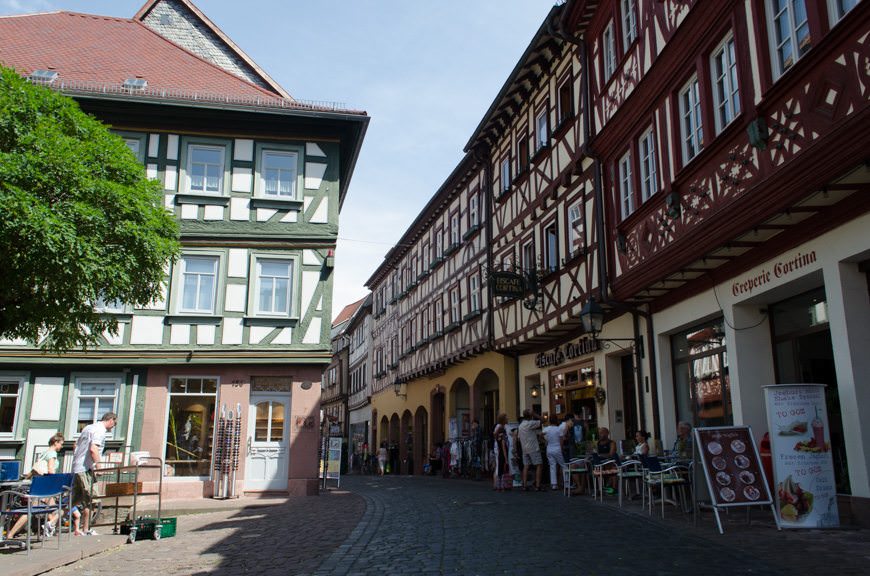 Miltenberg is a visual feast for the senses. It’s like stepping back in time. Consider all those who have walked the streets before you. Photo © 2015 Aaron Saunders 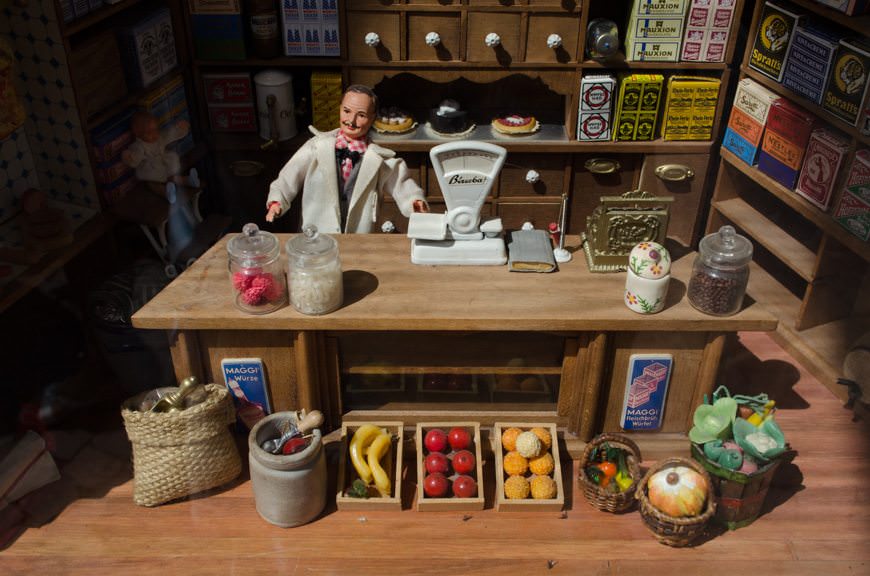 Shop displays in Germany are surprisingly intricate – like this miniature model in an antiques store. Photo © 2015 Aaron Saunders 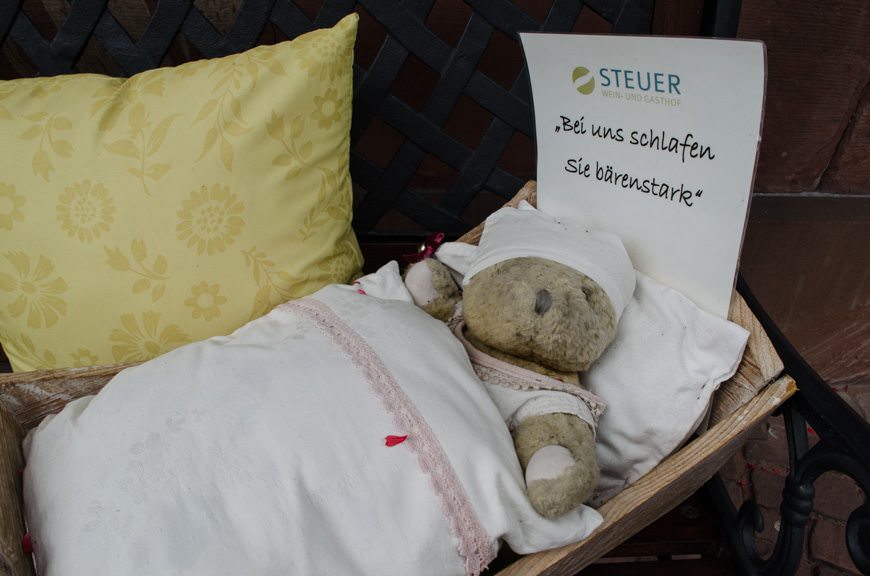 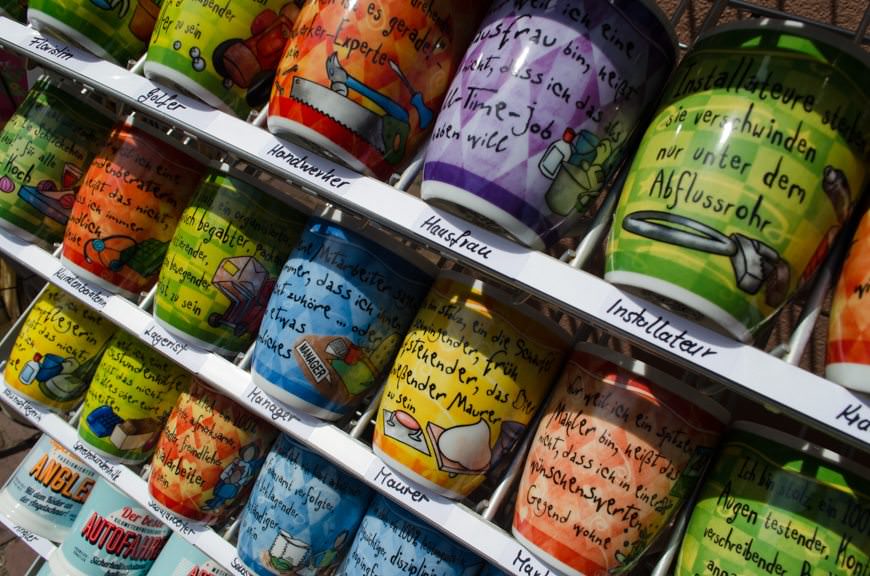 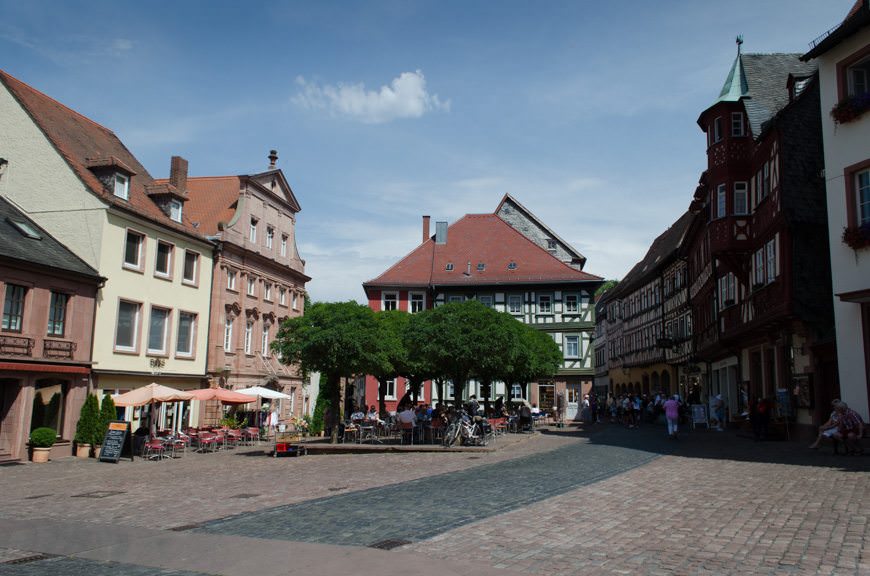 So why do I mention this? Because I am appreciative for the hours I had in Miltenberg today. Travel, in all its forms, is a beautiful gift – one that should never be taken for granted. Time is short. Life is short. And nobody’s perfect.

Pack your worries and your cares away; they won’t do you any good on your journeys. Instead, bring your sense of adventure and wonder. Bring the curiosity you forgot you had. Ask questions. Participate. Be interested. Be moved by what you see before you. Drop your comparisons of “back home” off at the pier.

Many people have done what I did today and sat down at the Hotel Zum Riesin to have a beer. Their ghosts echo through the walls and across the cobblestones that so many before me have walked. Deals were made here. Hearts were bonded and broken. Questions asked, and answers received. The subjects of these conversations have long since disappeared, but this place has not. It has stood the test of time, like so much of Germany. 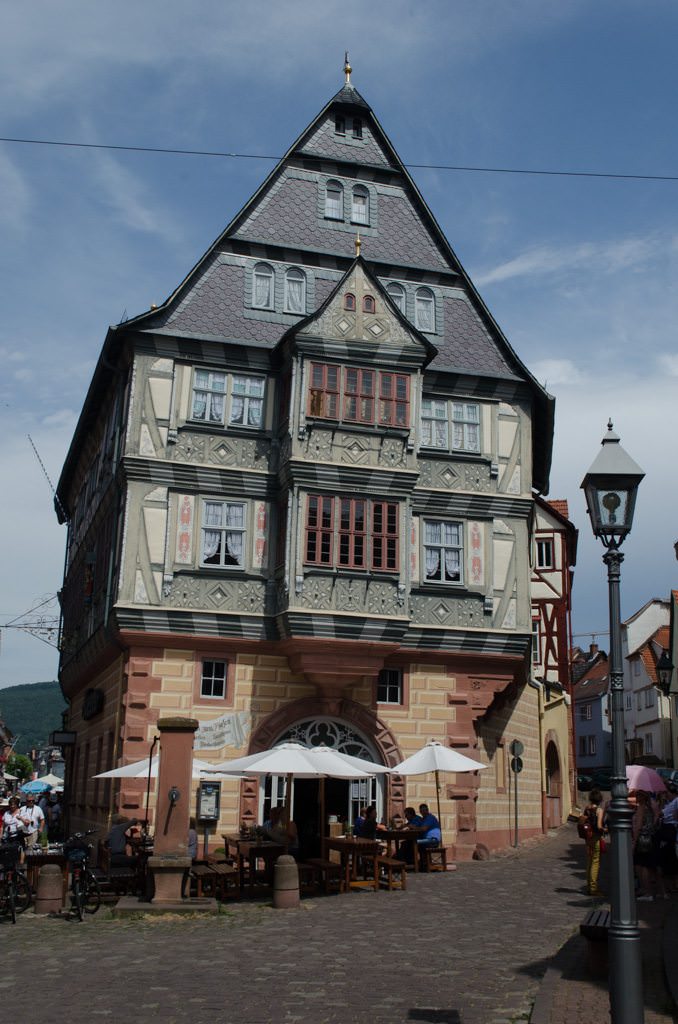 We, on the other hand, are decidedly finite in our time here. In the simple act of ordering a beer, I’ve found myself woven into the fabric that is Hotel Zum Riesin. I’ve inserted myself into a piece of Miltenberg history – however tenuous – and have cemented myself there as surely as my name appears in the credits of the many animated shows I worked on.

That made me change my outlook; my point of view. The feelings of tiredness evaporated. I was in Miltenberg, Germany on a gorgeous Friday afternoon, sipping an ice-cold, local beer on a freaking hot July day at the oldest Inn in Germany. How cool is that?! That’s absolutely fantastic! Prost!

My rambling, roundabout point is this: Viking might target the 55+ age group – but there’s no “right” age to take a river cruise.

The most important thing is merely that you arrive in the first place. 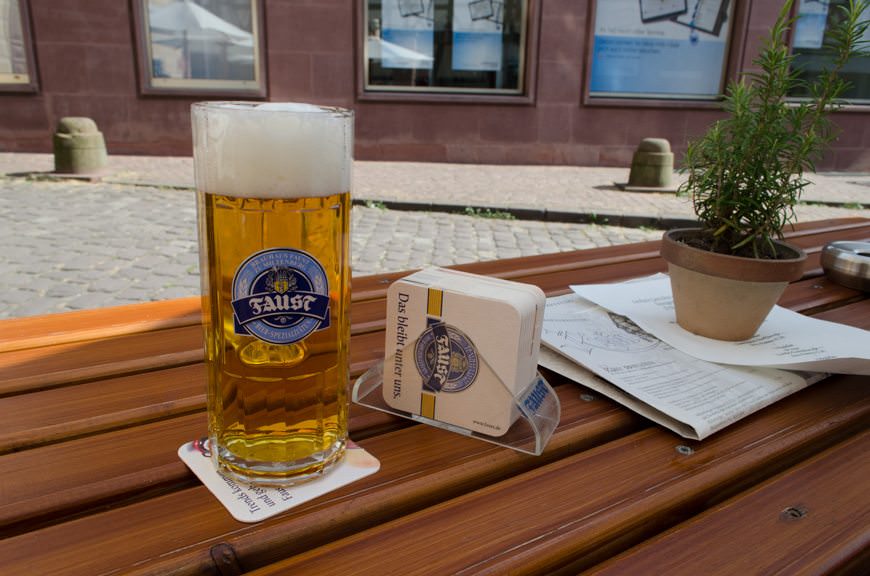 Here onboard Viking Vidar, most of the guests I’ve met are experiencing their first-ever river cruise, and most are impressed with the ship itself, the fabulous crew onboard, and the food. Someone onboard asked me how I’d describe the food; I said something like American-European fusion. You’ve got the European portioning and sensibilities that I like (in particular – food can be salty, spicy, or otherwise seasoned) coupled with fare that first-time American guests will probably feel comfortable with. So, they have Mahi Mahi…but it’s wrapped in bacon. Everything’s better with bacon!

I’m still hunting around the ship for little things that have been tweaked since my last full Viking river cruise in December, and the christening ceremonies in Amsterdam back in March. And I have to admit – except for the colour of the chair legs in the main dining room and the bedskirts (which I think have changed), it seems like the Viking team is happy with this generation of the Longships. Viking Vidar just entered service this spring, and she sparkles. 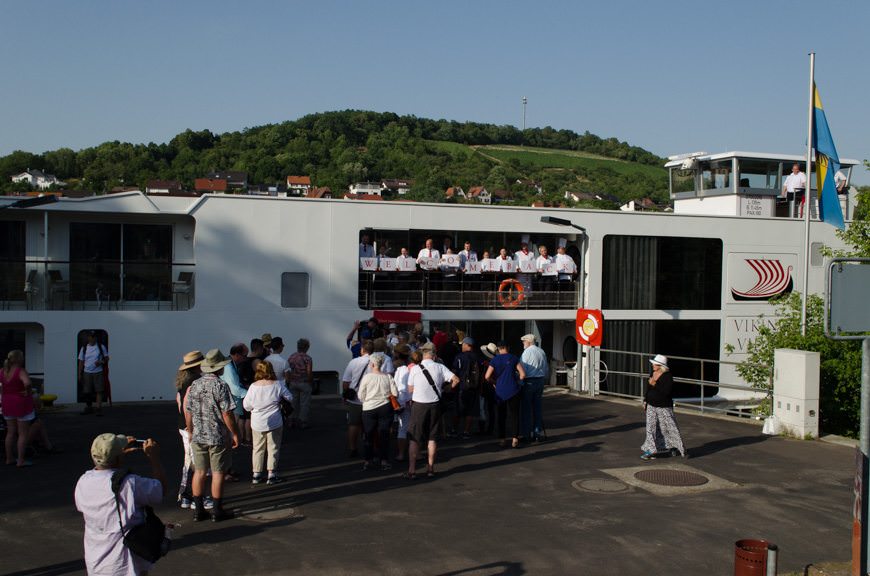 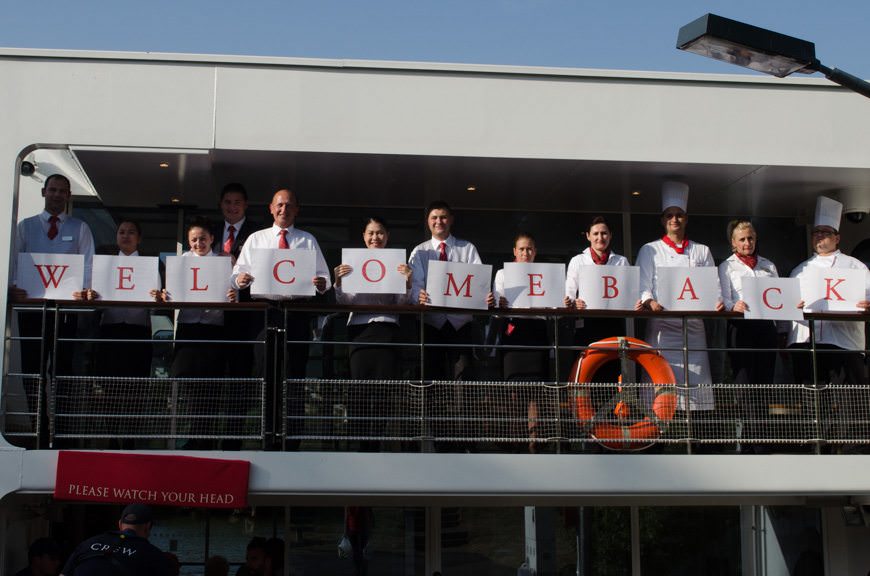 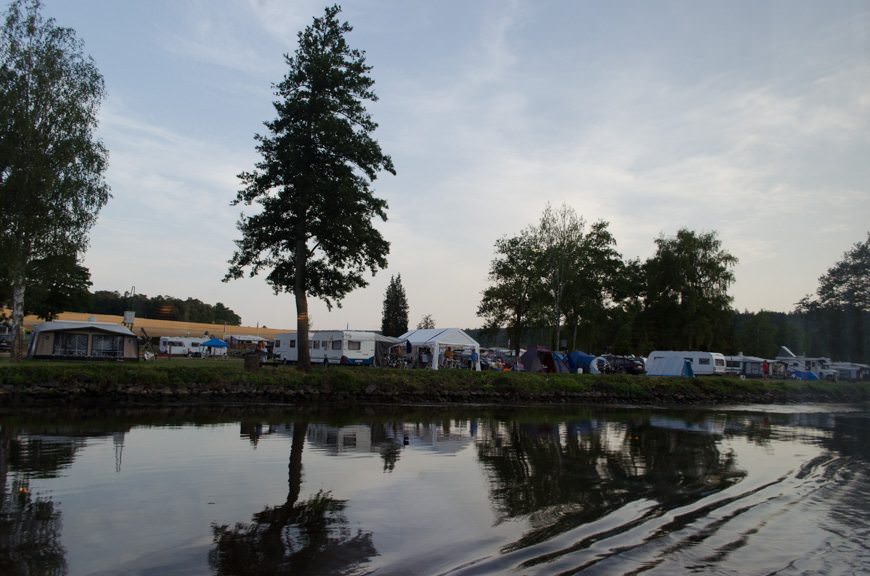 The view from The Restaurant at dinner. It’s surprising how many Germans like camping! Photo © 2015 Aaron Saunders

Of course, that’s largely the result of the crew. This is probably the most highly-tuned, personable and attentive river cruise crew I’ve had since I sailed aboard Viking Forseti to Bordeaux last fall – and a few of those crew members are here onboard Viking Vidar.

As someone who’s done quite a bit of river cruising, my real personal joy today came from seeing all these first-time river cruisers fall in love with the crew, the ship, and Europe. Viking has invested a lot of money into advertising and promoting their product, sponsoring PBS Masterpiece and running advertisements on major television networks. I’ve heard a figure – and it’s substantial. You could build a very nice cruise ship for what Viking spends on advertising. 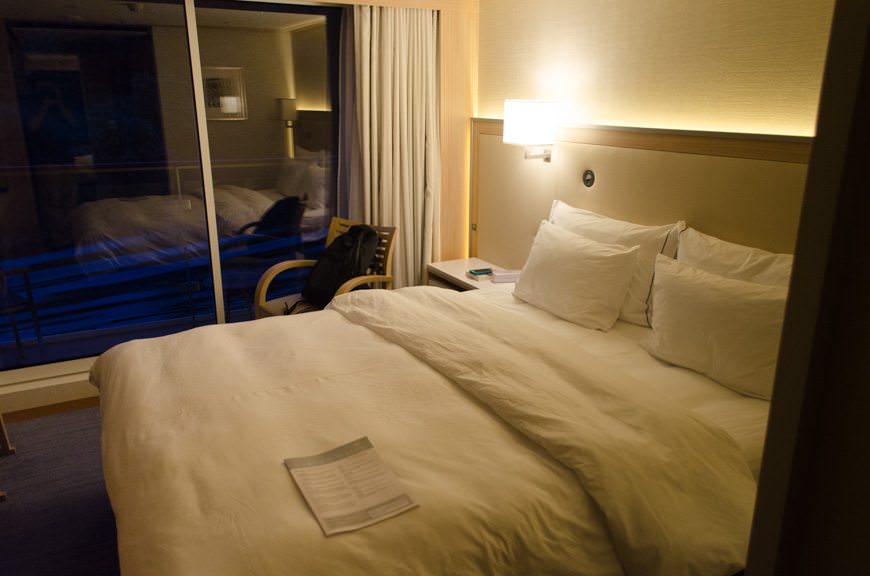 My Category A Veranda Stateroom, turned down for the evening. Photo © 2015 Aaron Saunders

It’s paid off: Viking took something that was a niche product and made it accessible. Most of the guests I’ve talked to had either friends, family or colleagues sail with Viking. They loved it. They came back. They told their friends. Their friends saw advertisements on television and in magazines. And here they are.

Viking is most certainly not mass-market…but they succeeded in bringing river cruising to the masses. And now, three years after the introduction of their revolutionary Viking Longships in Amsterdam in March of 2012, I’m getting a first-hand look at just how broad their overall vision really was. 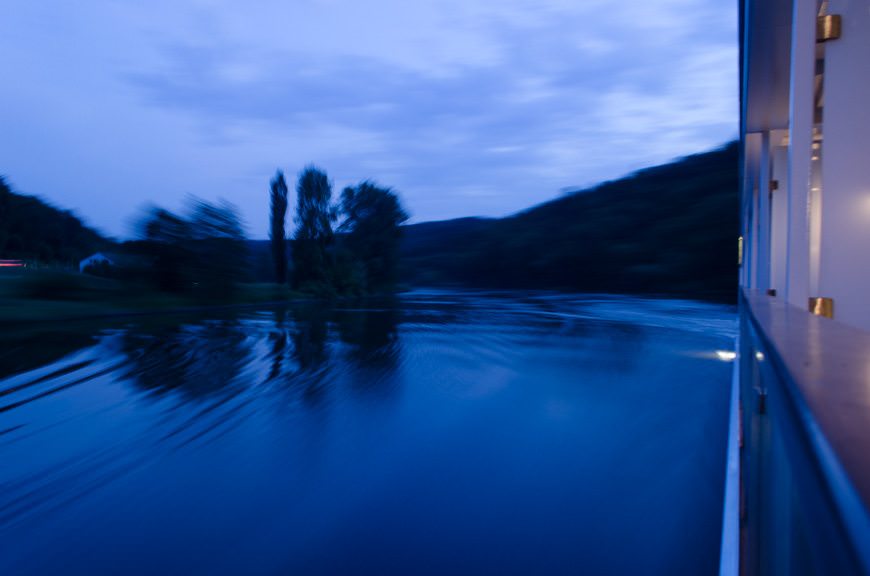 Our Live Voyage Report from onboard Viking River Cruises’ Viking Vidar’s Grand European Tour continues tomorrow from Wurzburg and Rothenburg! Be sure to follow along with our adventures on Twitter @deckchairblog.