Melk and a Taste of Austria! 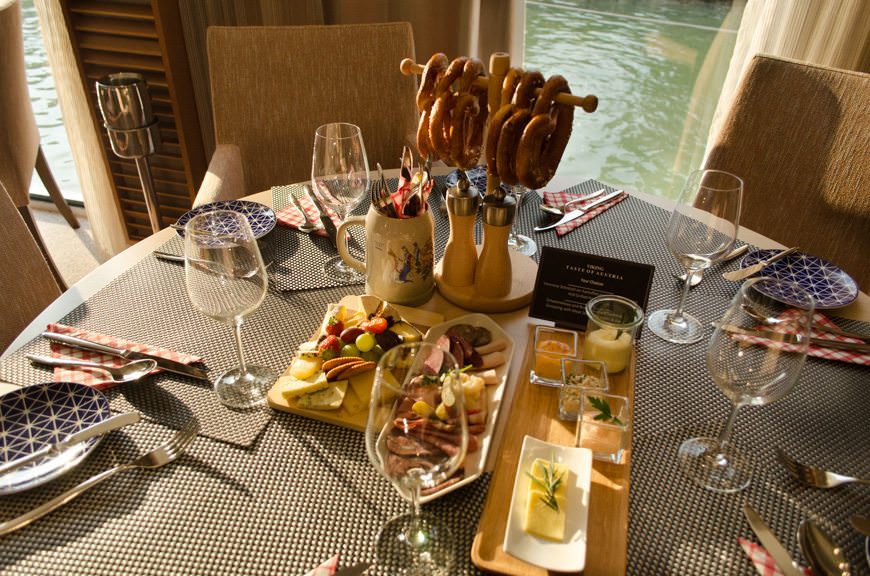 Today was wonderful…but our evening aboard Viking Lofn was spectacular. Photo © 2015 Aaron Saunders

This morning, Viking River Cruises’ Viking Lofn arrived in Melk, Austria as our 15-day Grand European Tour to Budapest enters the home stretch. Actually, we’re not in Melk at all – but across the river in Emmersdorf. The realities of river cruising in the summertime: you may not always be docked right in town.

Of course, the thing to do in Melk is to take part in Viking’s tour of the imposing Melk Abbey, the canary-yellow superstructure of which lords over the town of Melk like a king surveying his fiefdom. 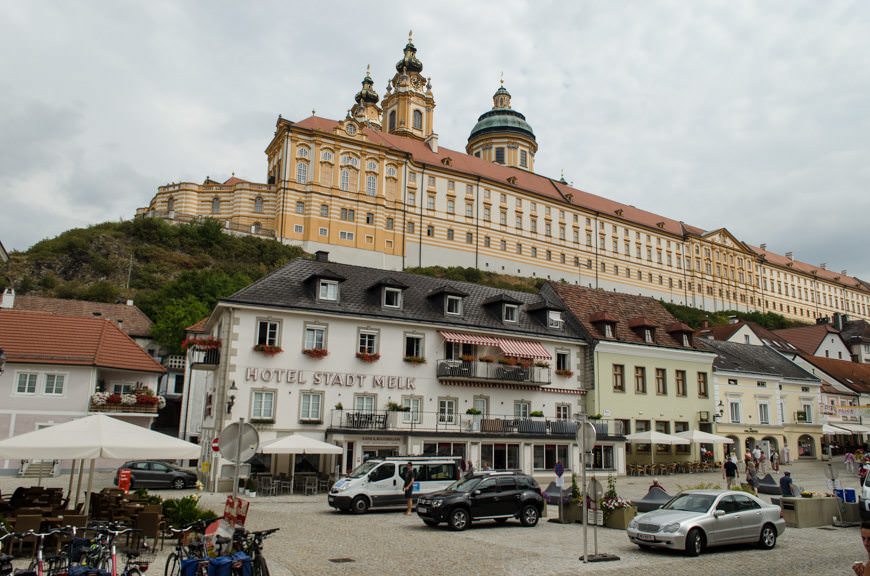 I’ve said it before, and I’ll say it again: The imposing Melk Abbey lords over the town of Melk. Photo © 2015 Aaron Saunders

I think it’s worth mentioning at this point how well Viking organizes their tours; everything about the experience is highly-polished, from the crew members who hand out bottled water and maps to guests as they disembark, to the way coaches are organized and groups are split into regular and gentle “leisure” walkers.

In the case of Melk Abbey, Program Director Henrieta even knows how many steps you’ll have to descend in order to reach the Abbey from the coach parking lot: 65. Nothing strenuous if you’re active; problematic if you’ve got mobility issues. 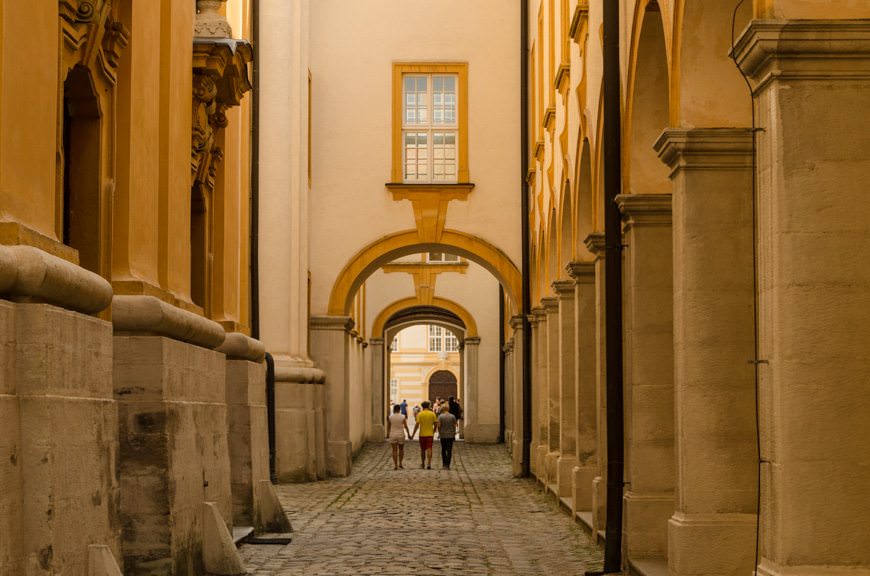 Exploring Melk Abbey is like stepping back in time. I’ve been here many times – yet I never tire of visiting. Photo © 2015 Aaron Saunders

Known as Stift Melk in German, Melk Abbey was founded in 1089 by King Leopold II, who bestowed one of his many castles upon the Benedictine Monks in the region. Today’s abbey dates not from 1089, but from the 1700’s: construction of the abbey lasted 34 years, from 1702 to 1736.

Designed by Jakob Prandtauer, the abbey manage to avoid the reign of Joseph II; the Napoleonic Wars; both World Wars, and the annexation of Austria to Germany, known as the Anschluss. 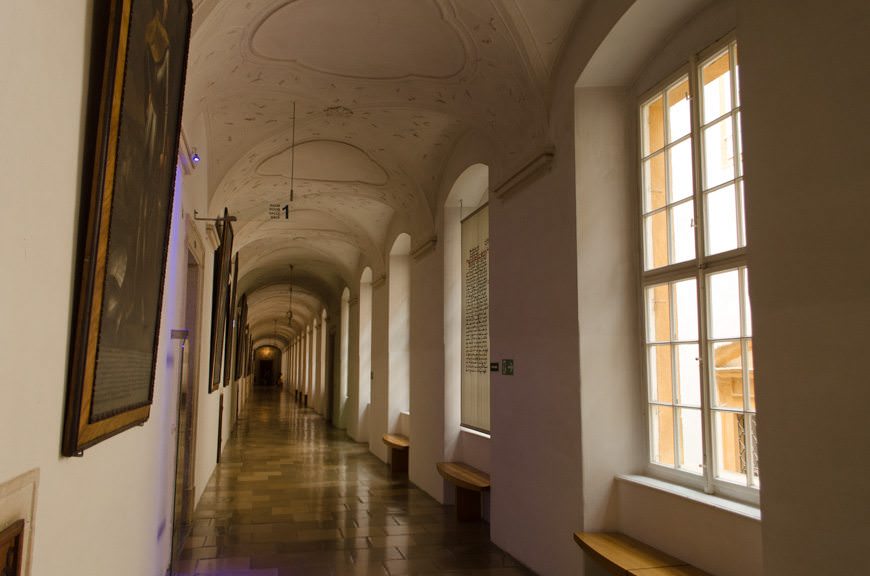 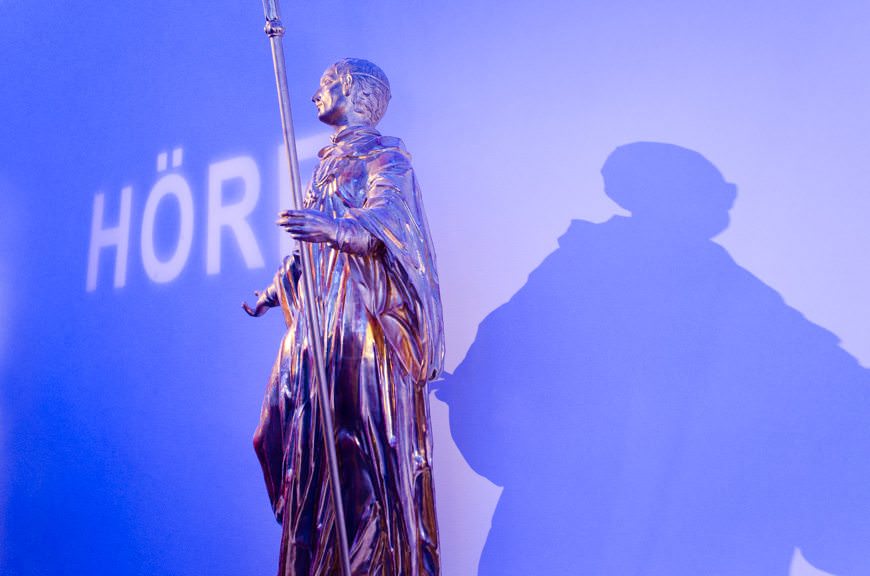 …you begin your tour in a series of 11 interconnected rooms. Photo © 2015 Aaron Saunders

Today it serves as a functioning monastic school and tourist attraction. The abbey museum opened on June 29, 2001, and is still to this day surprisingly modern. For all those travellers who bemoan the sight of an abbey with a groan and an utterance of, ‘not another bloody church!’, I have news for you: Melk Abbey is surprisingly interactive, and wonderfully presented.

Split into different rooms, the first room you’re greeted with is bathed in blue fluorescent lighting and anchored by a statue of Benedict of Nursa. The word Höre (German for “Listen”) is digitally projected onto the nearby wall. 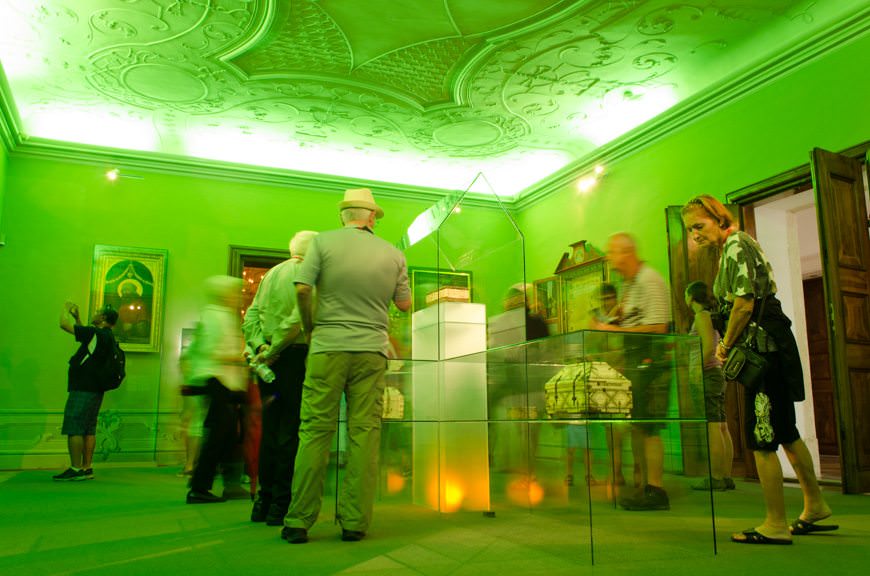 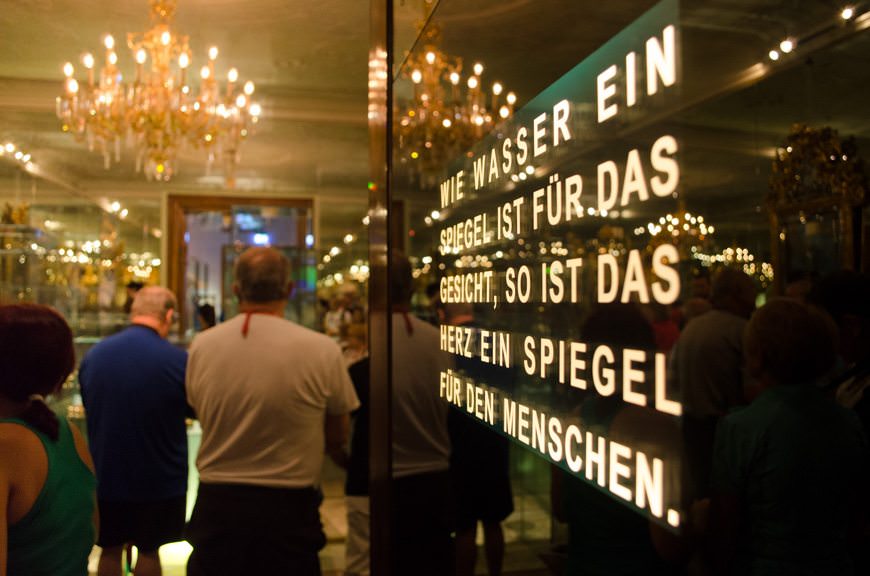 A total of 11 rooms guide visitors through the abbey’s treasures and teachings, presenting information in a modern and surprising fashion. But it is a presentation that can also be unsettling.

I’ve been here five times now – and I can’t shake the disturbed feeling I get when I walk into Room 9: The Path to the Future. Done in shades of blood-like crimson, the room is supposed to show the progression of Jesus Christ. This is a good time to preface that I’m not in any way religious. I’m not an atheist, either. I just don’t subscribe to any one thing.

Yet, whenever I enter this room, the hairs on the back of my neck stand up. All I hear in my head is the Jocelyn Pook score to the movie Eyes Wide Shut. 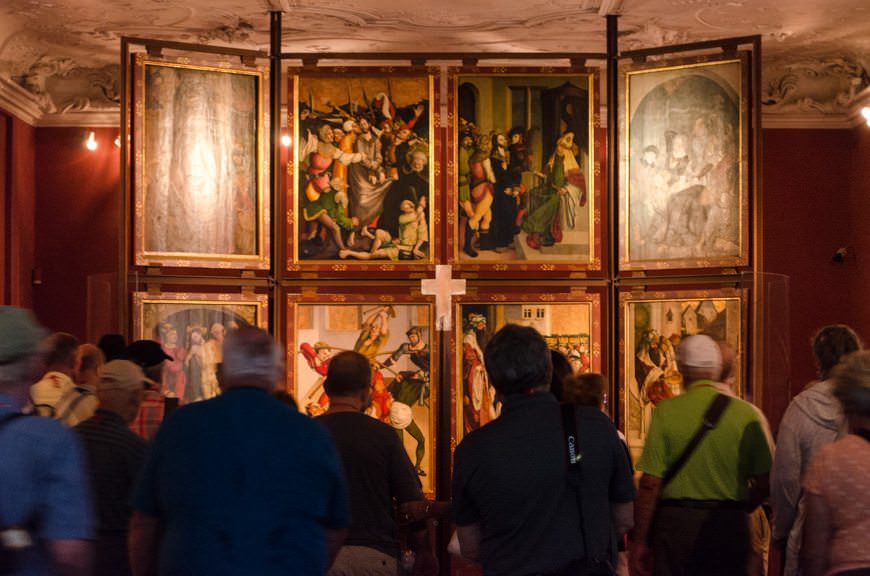 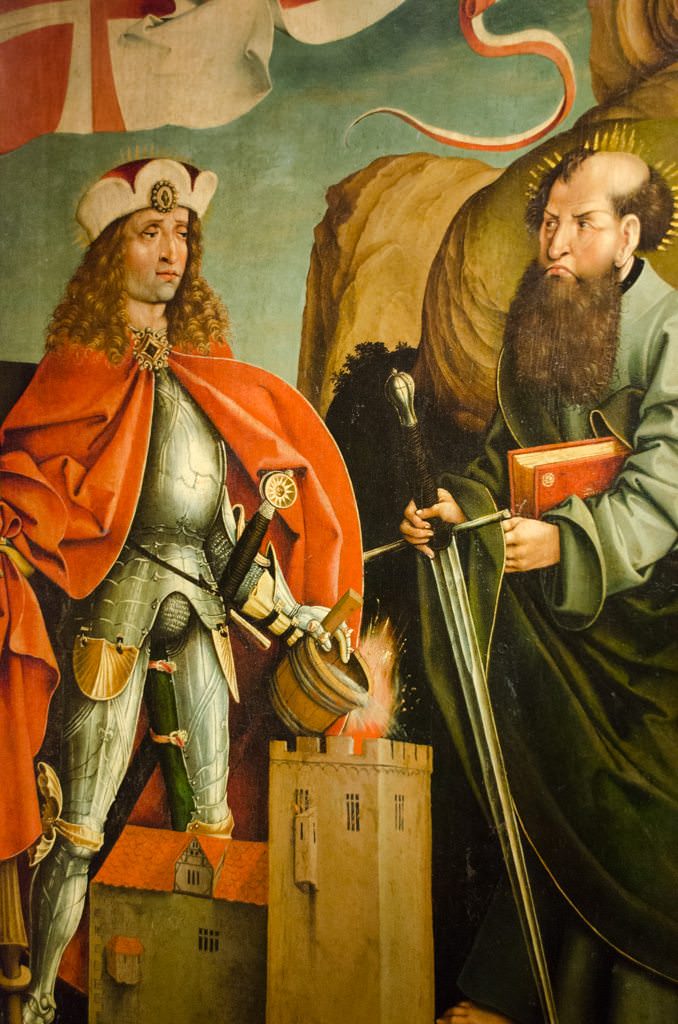 The room is anchored by an altar cross, and book-ended by a concave wall of paintings done in the 1400 and 1500’s depicting the life of Jesus Christ. At least, that’s what they say. I, however, see nothing but tortured expressions of angst, pain and terror. It’s a room I can’t wait to leave; a place I cannot wait to separate myself from. I have no idea why. But every time I visit Melk Abbey, I dread entering the red room. I take some photos, and flee into the relative safety of the brightly-lit corridor. And I wonder: why? 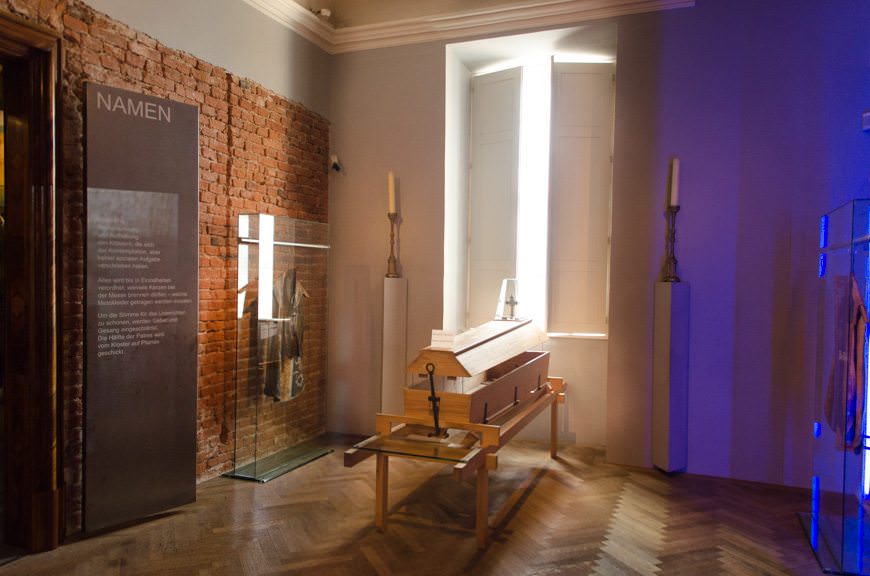 Another curious room is Room 7: In the Name of Reason. It could also be dubbed, “In the Name of Practicality” for its reconstruction of an 18th-century reusable coffin. In 1784, this coffin was developed to allow burial without the need for permanent coffins. The deceased would be placed inside the coffin and lowered into the grave, whereby a series of swing doors would release. The deceased would be deposited in the grave and the coffin winched out, ready for the next poor serf to go.

Of course, the most immediately impressive room is the Library, which houses volumes dating back centuries. Photography and videography aren’t allowed, but the library is a stunning example of the preservation of literature and knowledge. 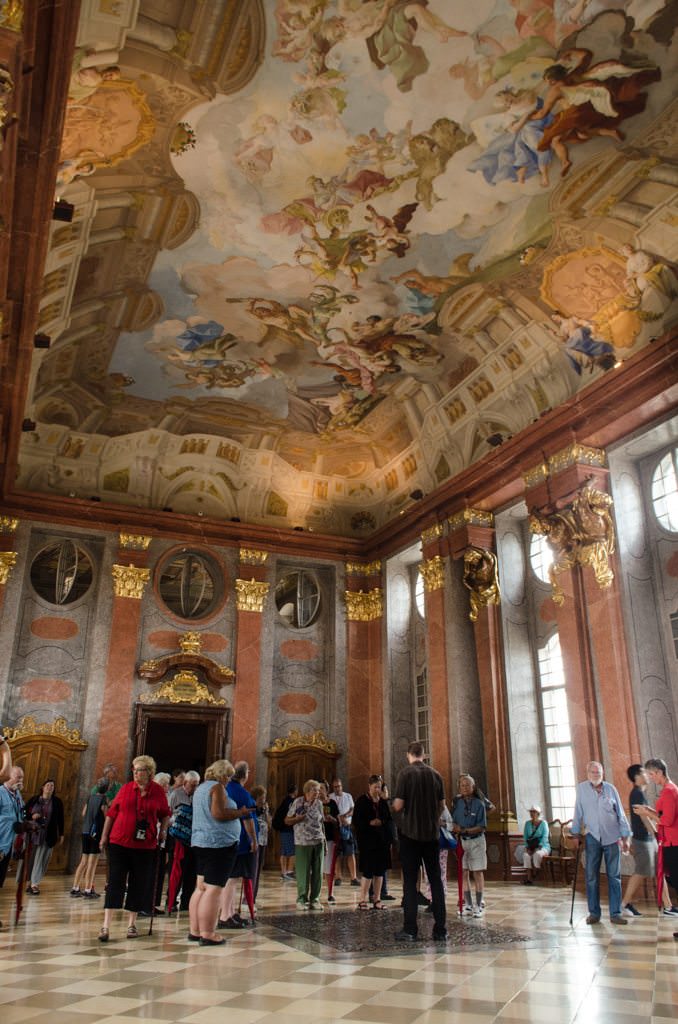 Melk Abbey’s baroque opulence. The ceiling isn’t really curved, though. Like so much of Melk Abbey, a trompe l’oeil, or illusion, has been employed. Photo © 2015 Aaron Saunders 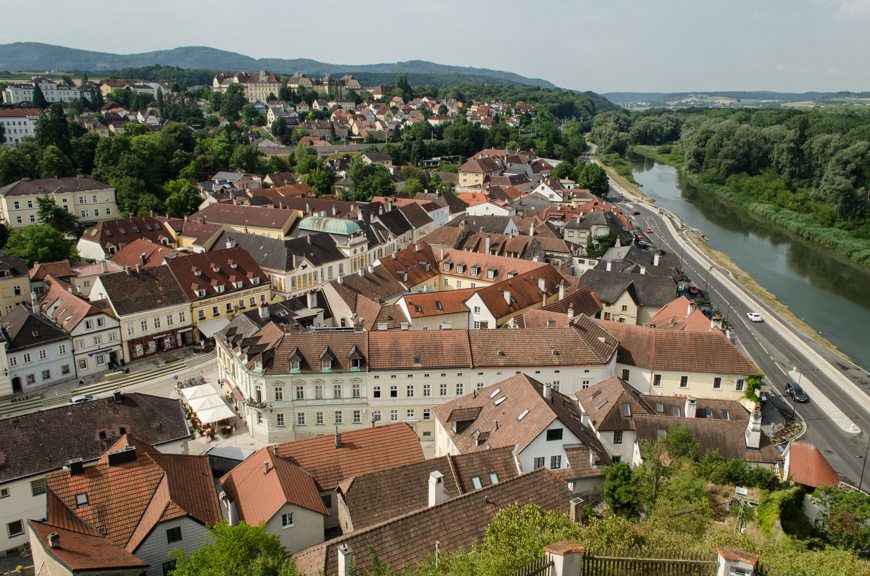 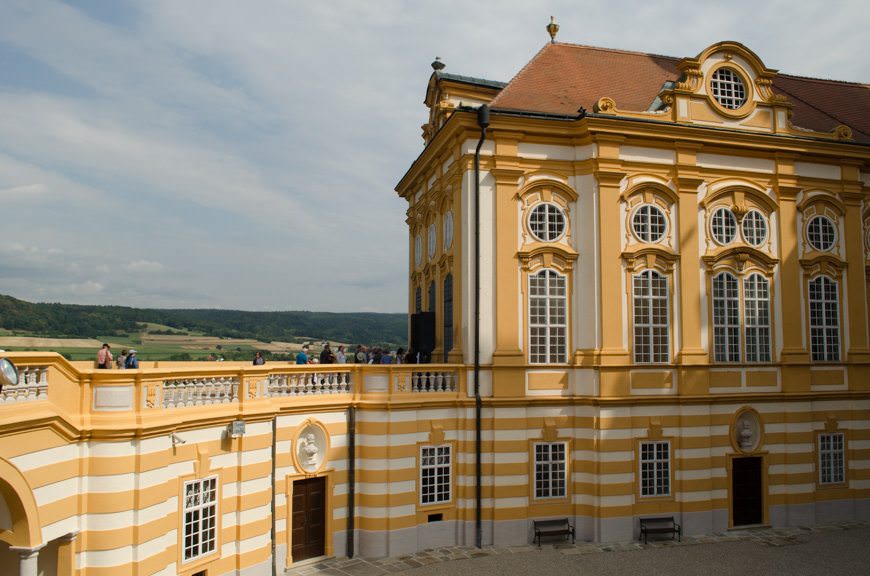 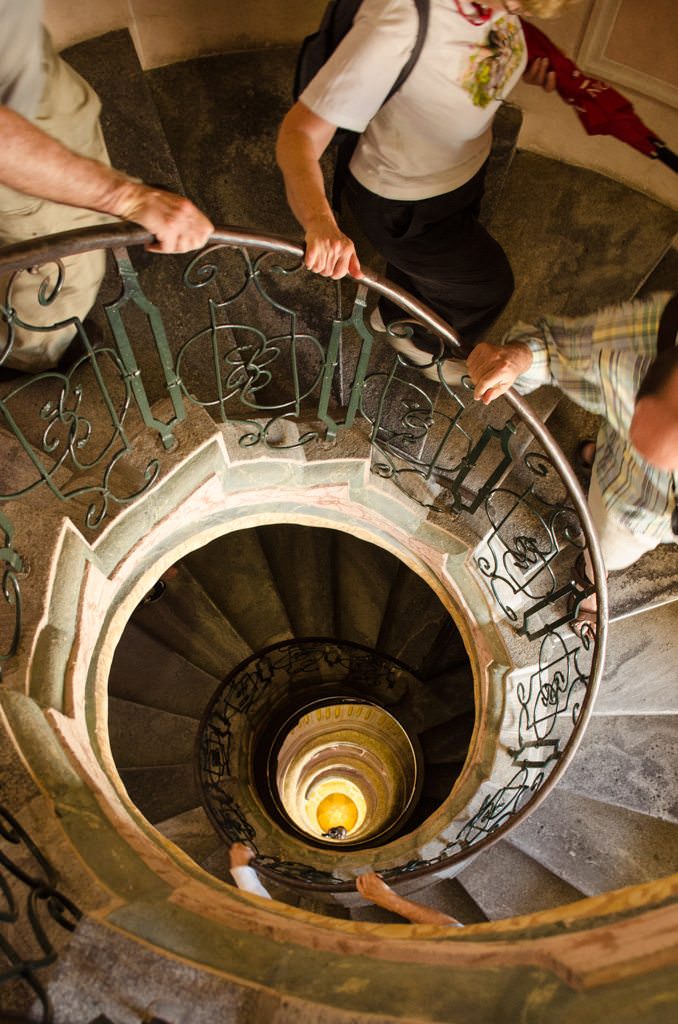 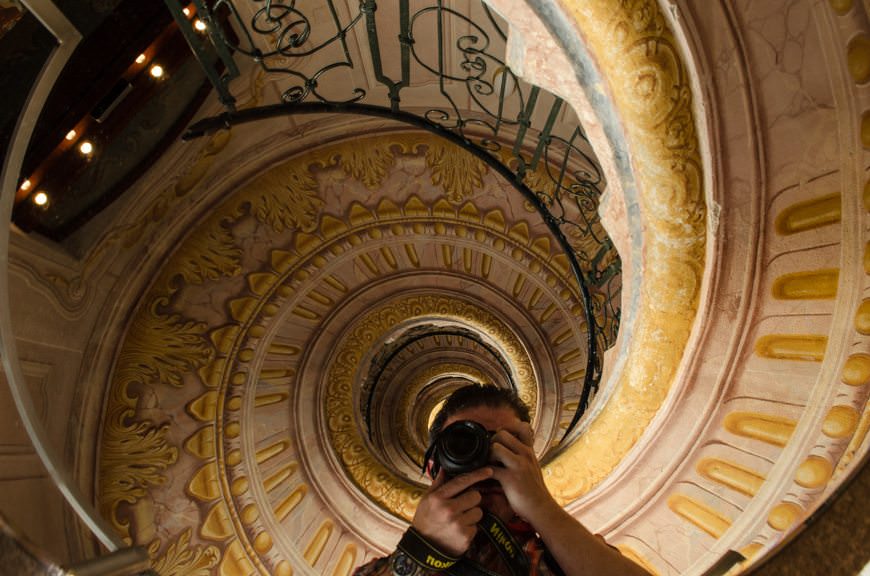 …which looks taller than it really is, thanks to a mirror placed at its base that exaggerates the overall height. Photo © 2015 Aaron Saunders 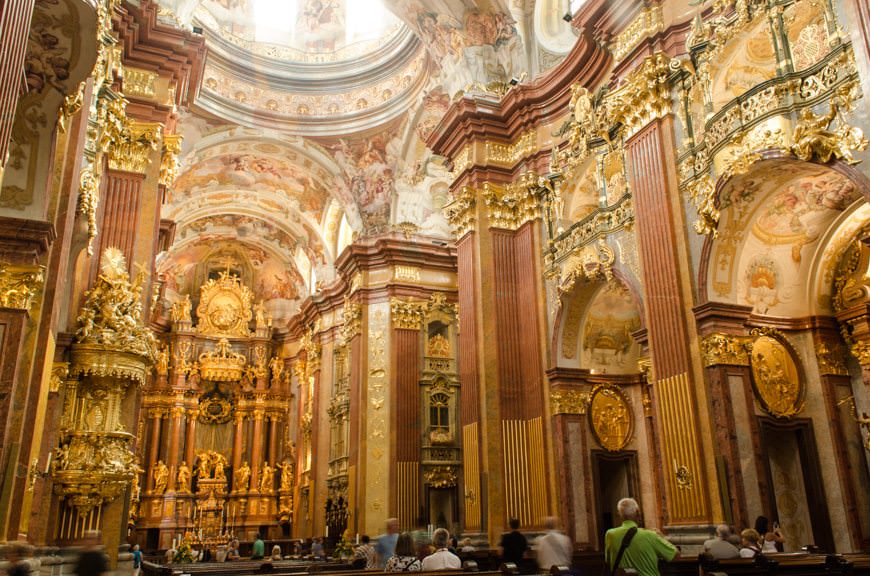 The tour of Melk Abbey concludes in the Abbey Cathedral. Photo © 2015 Aaron Saunders

Following our visit to the abbey, guests were given free time to enjoy in the small town of Melk before our coach transfer back to the ship at 12:00 Noon or 12:30 p.m. I took the opportunity to have a beer and purchase a newspaper. English newspapers are available from most major news-sellers, though the edition might be from the previous day, as was the case for me. 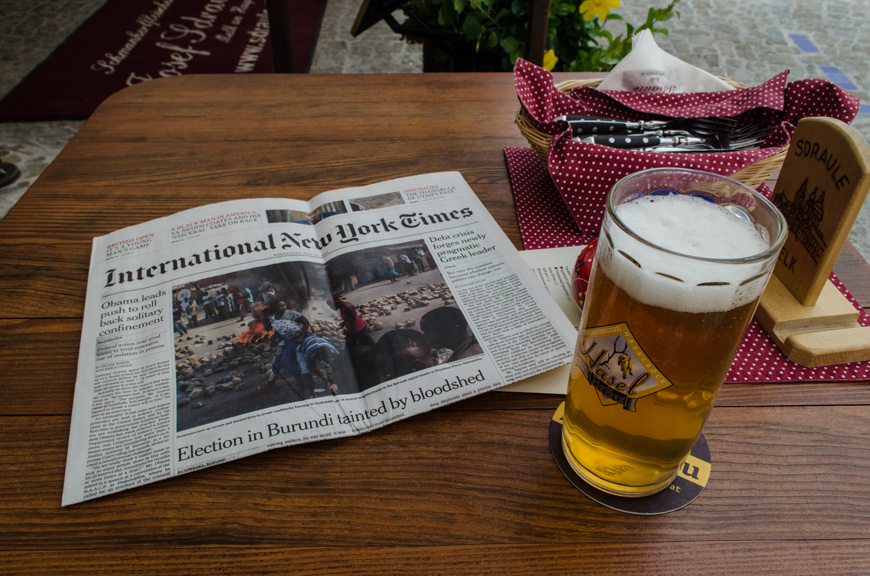 When in Rome…Photo © 2015 Aaron Saunders

This afternoon, we stopped briefly in the small town of Krems an der Donau, Austria. Situated 70 kilometres west of Vienna, Viking ran shuttle busses from our docking space into the center of town. It really wasn’t all that far away, but I appreciated that Viking scheduled bus service for guests so that they could go into town without having to walk there.

As for me, I like to walk. I made a short tour around Krems, just as the sun was going down. 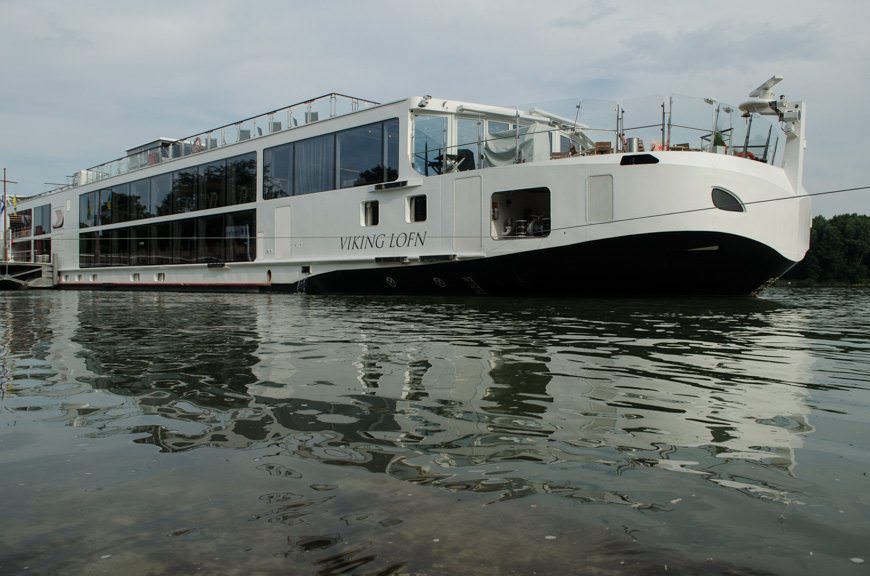 Viking Lofn tied up at her berth in Krems this evening. Photo © 2015 Aaron Saunders 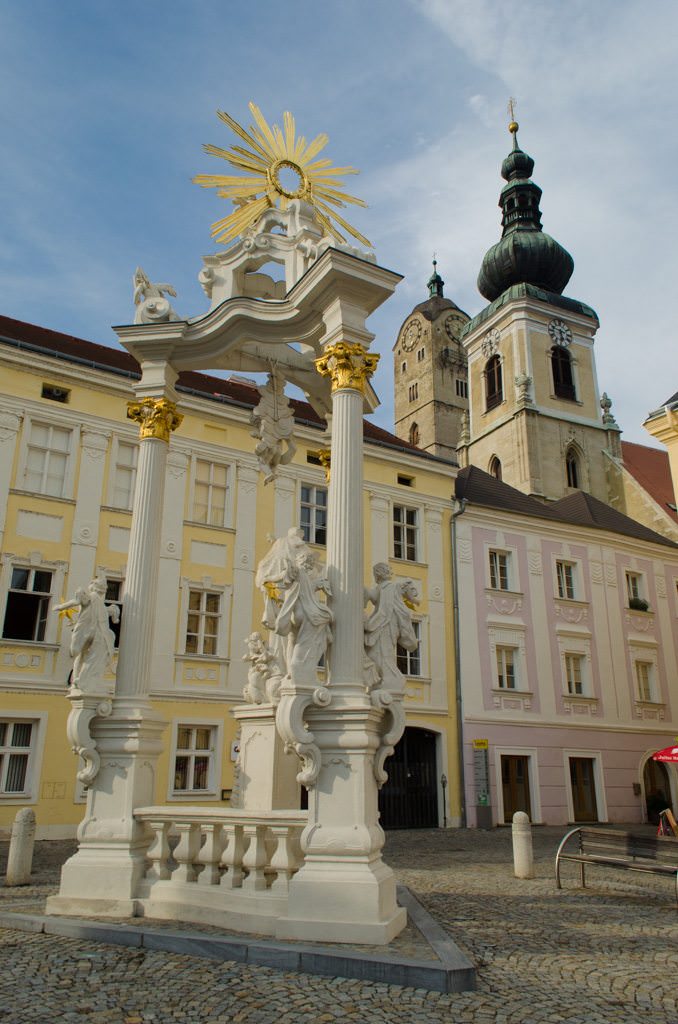 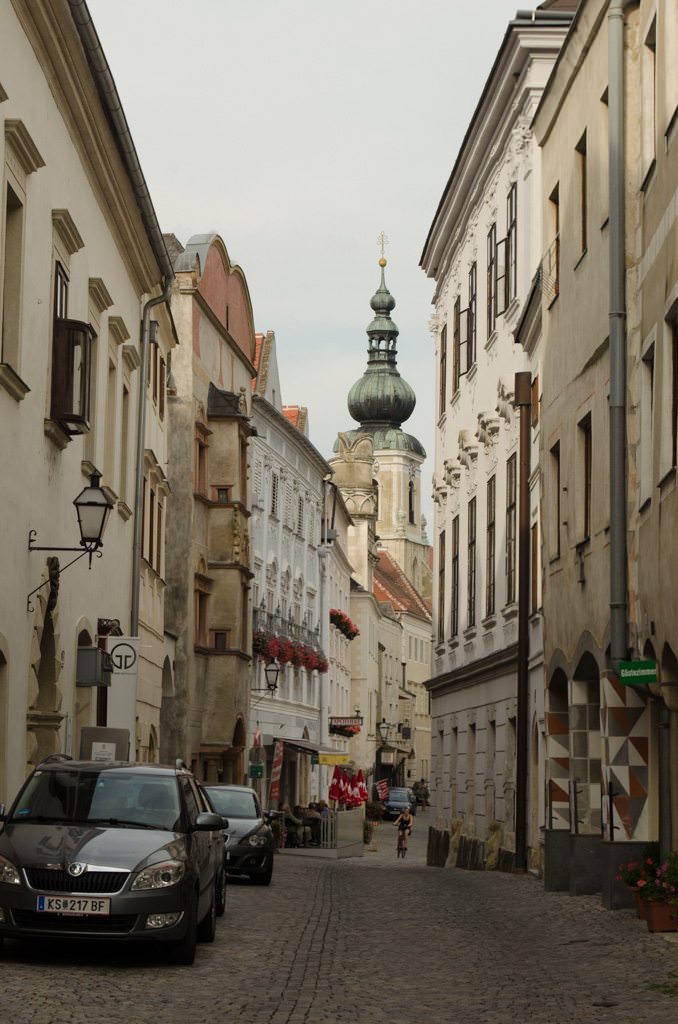 For me though, tonight said everything about why I love Viking, and why I tend to speak so highly of them. This evening, the crew of the Viking Lofn held a special Taste of Austria evening for us, with food, live music and drinks galore being served in the Viking Lounge, the Restaurant, and even the galley.

I’ve experienced these dinners on Viking before. They’re always, without exception, spectacular. But this one tonight really upped the bar on anything I’ve had on any other river cruise line. There were fresh pretzels on every table, complemented with a full charcuterie plate of smoked meats, cheeses, crackers and fruits. 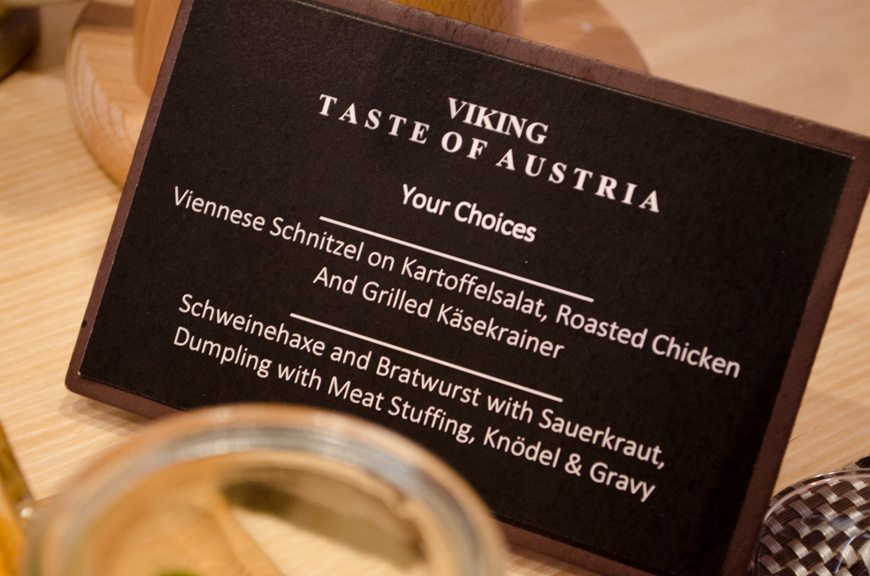 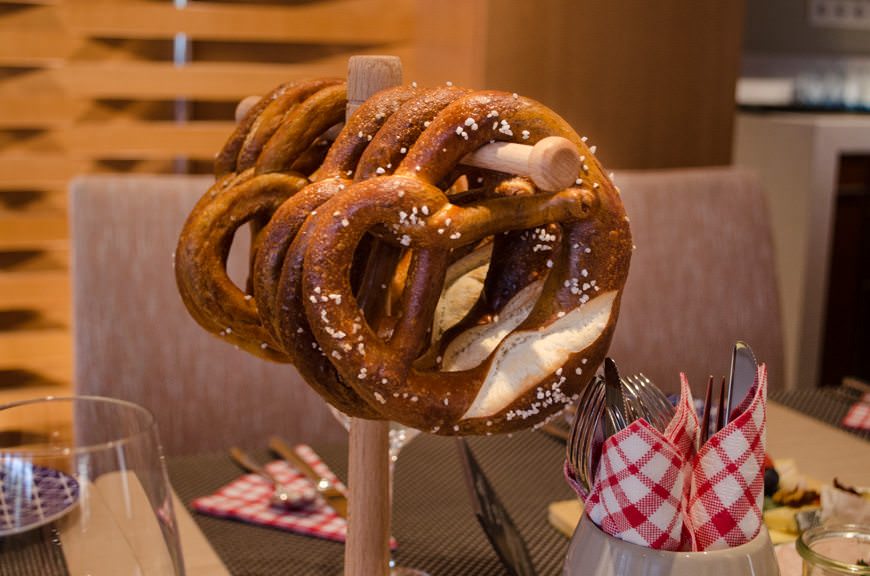 Every good Taste of Austria needs fresh pretzels – and every table had plenty of them! Photo © 2015 Aaron Saunders 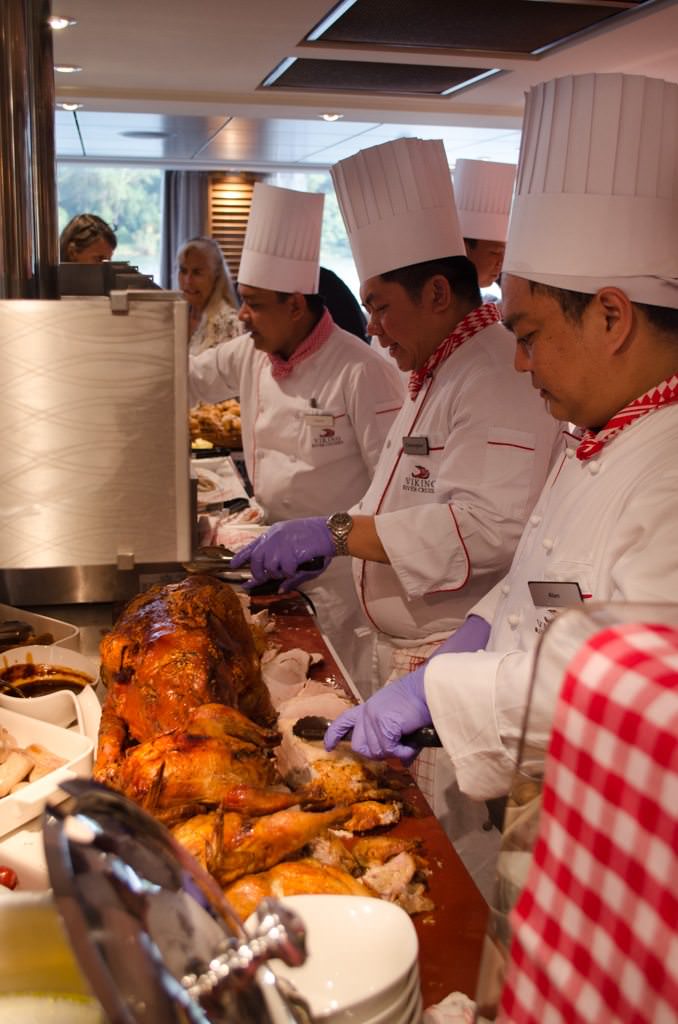 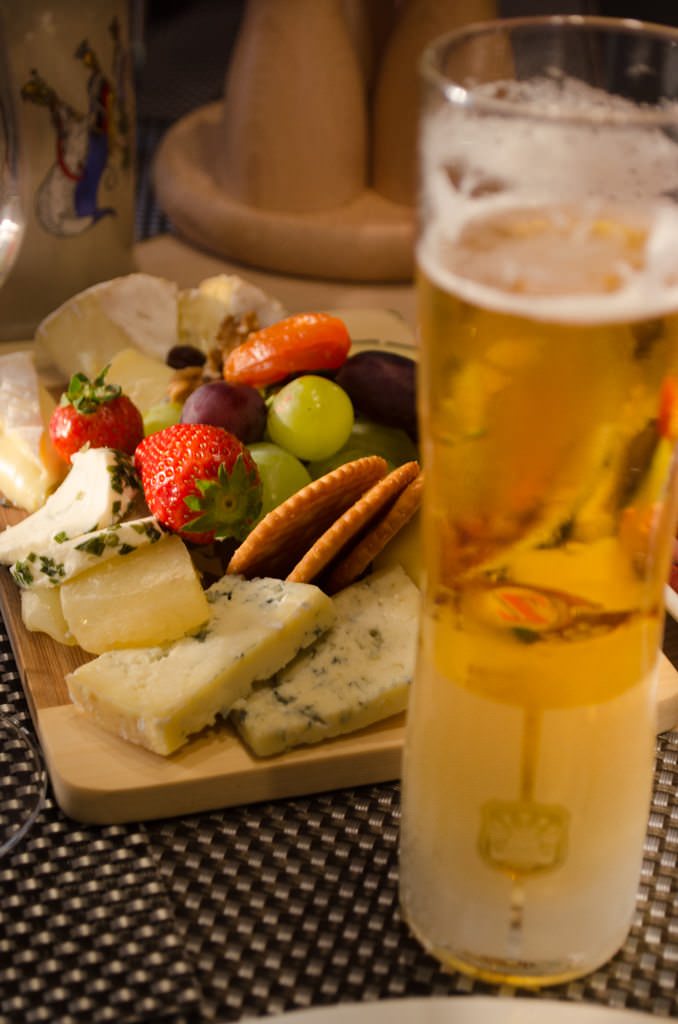 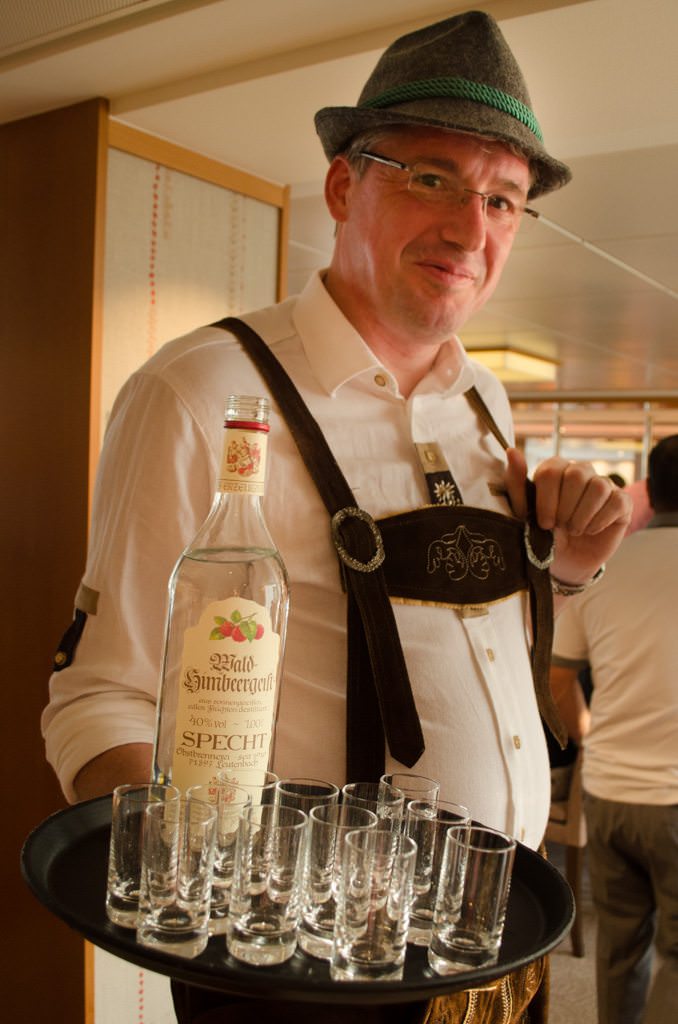 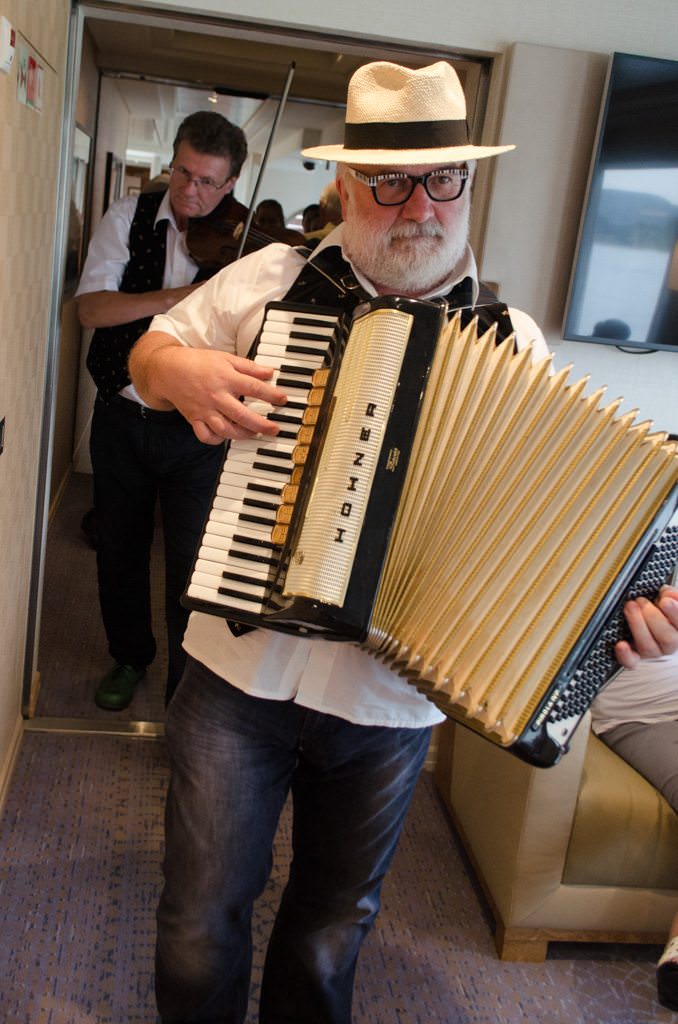 Then, at the buffet, was suckling pig. Chicken. Sausages of every kind. Weiner Schnitzel. Two kinds of soups with three separate choices of dumplings. Beer poured straight from kegs. Austrian wines for those who didn’t like beer. Schnapps!

It was a feast like no other…and it was enjoyed, fully, by 187 very happy guests who are all discovering – if they haven’t already – the Viking difference. 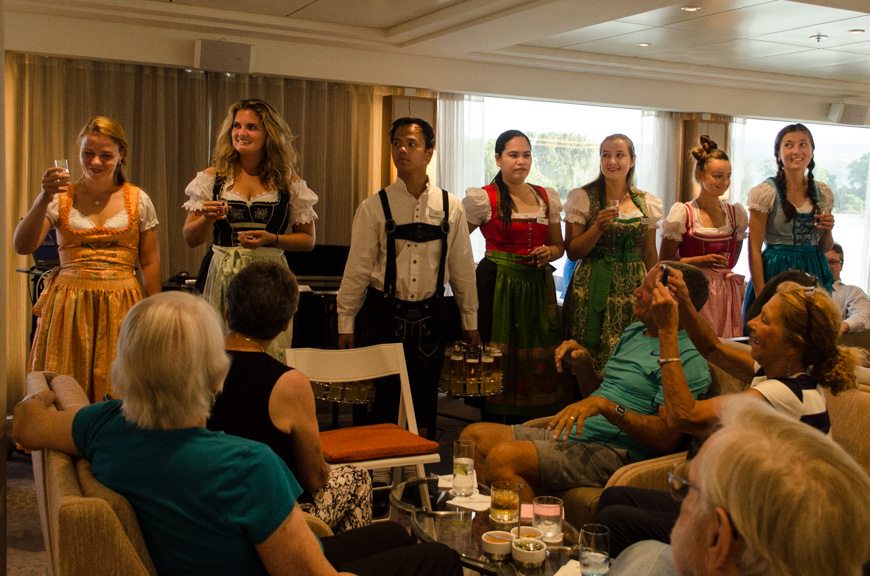 Our Live Voyage Report from onboard Viking River Cruises’ Viking Lofn’s Grand European Tour continues tomorrow from Vienna, Austria! Be sure to follow along with our adventures on Twitter @deckchairblog.