I’m a few days behind on my Live Voyage Reports. There is a simple explanation. I’m enjoying the trip. The following report is from Day Four of my journey on Tauck’s 12-day Danube Reflections itinerary from Prague to Vienna.

I’m only four days into a 12-day trip with Tauck, yet I’ve observed a few points that differentiate Tauck in its competitive set. These are the little things that Tauck does that the other river cruise companies do not do.

1. Distribute foreign currency to guests. For lunch on our own in Prague yesterday, Tauck tour director Sinead handed each of us 500 Czech Koruna. That’s about US$20, and it’s more than enough to have lunch with wine or beer in Prague. I’ve seen other river cruise companies provide vouchers, for a free drink at a venue, for example, but I’ve never seen a company hand over cash for an event such as lunch on our own. Tauck handed over about US$2,500 in Czech notes for 123 guests. That was not only different but also pretty classy.

2. Pay for use of public toilets. In most of Europe you’ll need to have a few coins handy if you want to use the public restrooms. The cost ranges from 20 euro cents to 1 euro, and you typically hand your coins over to a person who serves as the gatekeeper. With Tauck, you simply show the gatekeeper a green lanyard attached to your “Vox” (a listening device for tours) for free entry into the toilet. The tour directors come to pay up later.

Of course, I’ve already mentioned my loft category stateroom. It’s innovative and roomy, and no other river cruise company has anything like it. If you missed my review of the loft stateroom, see yesterday’s post.

Also in yesterday’s post, I wrote about how low water on the Danube had affected our docking position. Tauck’s ms Savor was docked not in Regensburg, Germany, as planned but 148 kilometers downriver in Engelhartszell an der Donau, Austria.

The repositioning was not ideal, but as I wrote earlier, Tauck’s captain made a smart decision to move the ship. Yes, being 148 kilometers from Regensburg meant that guests could not simply walk off the gangway and into Regensburg for their tours. Instead, they had to board busses, which no one I have ever met likes to do, and travel for two hours (2.5 hours on the way back) for their Regensburg tours. Those doing the Nuremberg tour had an even longer trek, three hours each way. Quite a few people, me included, skipped the tours this morning because of the time required to travel between ms Savor and Regensburg or Nuremberg. 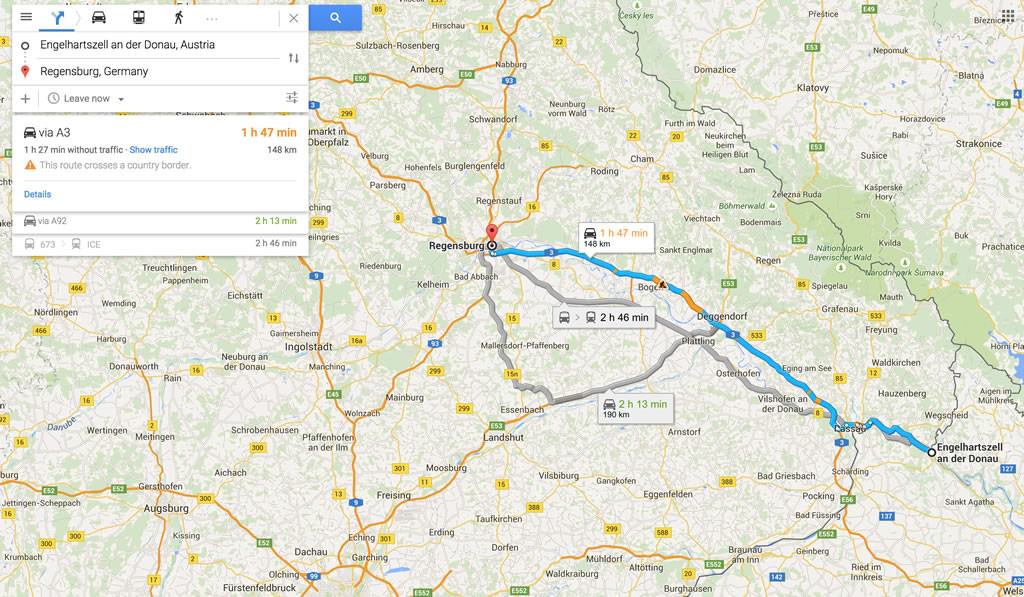 We docked 148 kilometers downriver from Regensburg, where we were originally scheduled to dock.

On the flip side, we’re still cruising — with a lot of water beneath our keel. River cruise operators who remained upriver weren’t so lucky. River Cruise Advisor’s Aaron Saunders had to switch Viking ships to continue his journey. Switching was a hassle but at least Viking, with its armada of ships, was able to work around the issue. Avalon Waterways reportedly was forced to scrap its July 19 “Highlights of Germany” river cruise because of low water.

Low water certainly makes our readers nervous. Elsa and Chuck Nystrom (bloggers themselves) wrote: “Your report is making me a little nervous. Only three weeks until we sail on the Maria Theresa on European Jewels. I can see where they might transfer us since they have two ships sailing this route, one from each direction. Rain would be better, but not too much. Uniworld says I shouldn’t worry, they will work it out. Of course I will worry anyway.”

Reader Kathy Rus says she agrees that one must be flexible, “but signing up for a river cruise and getting a bus tour is not what I have in mind. I could go to Germany and Prague on my own, but I am spending a fair bit more money because I want to go on a river cruise … ”

A prolonged downpour could restore the rivers to sufficient levels for ships to navigate. Keep an eye on our Water Levels page for the latest information.

The Most Important Meal Of The Day, Breakfast At Arthur’s 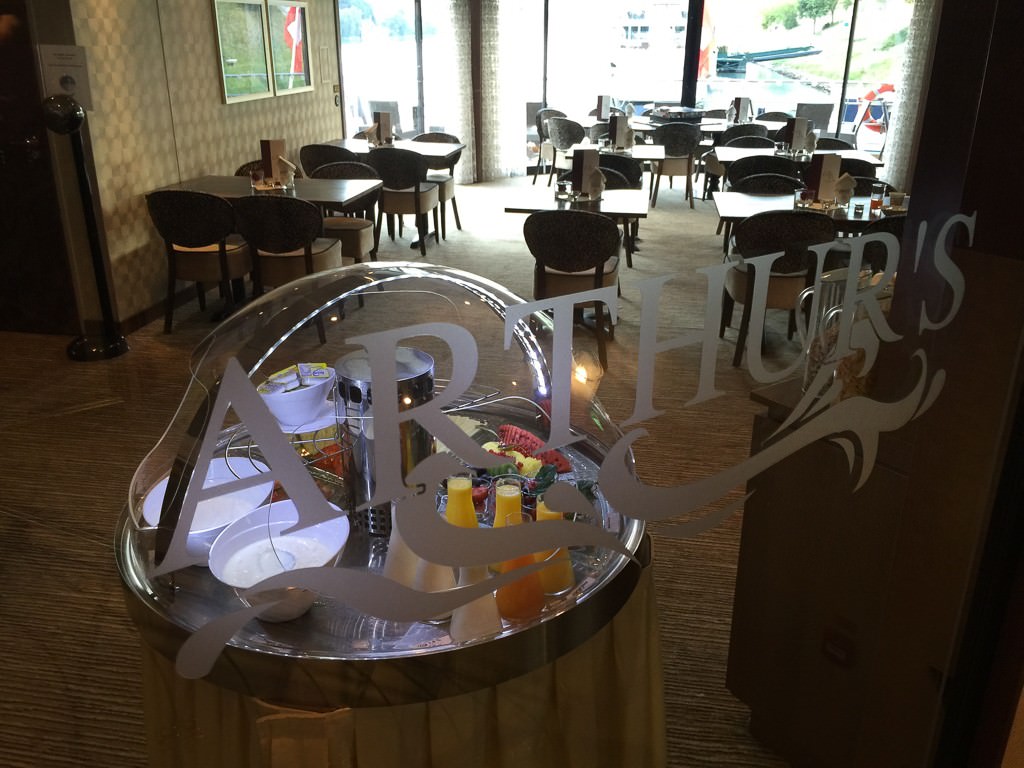 I started my day with breakfast in Arthur’s. © 2015 Ralph Grizzle

Back in Engelhartszell an der Donau, I began my day with breakfast in Arthur’s, the aft-situated alternative dining venue. I like this room quite a lot, with its wrap-around windows and tables for two and four. The selection for breakfast isn’t quite as varied as it is in the main dining room, but there are ample servings of cereals, yogurt, fruit, juices, tea and coffee. 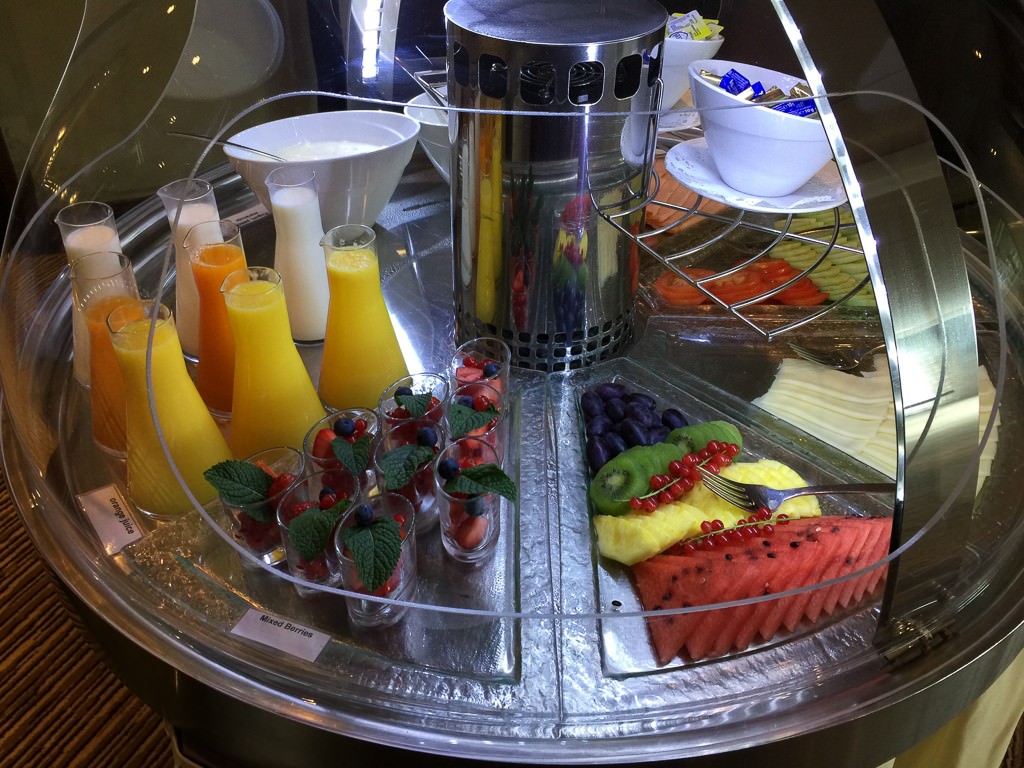 The selection is not as varied as it is in the main dining room, but Arthur’s has everything I require for breakfast. © 2015 Ralph Grizzle 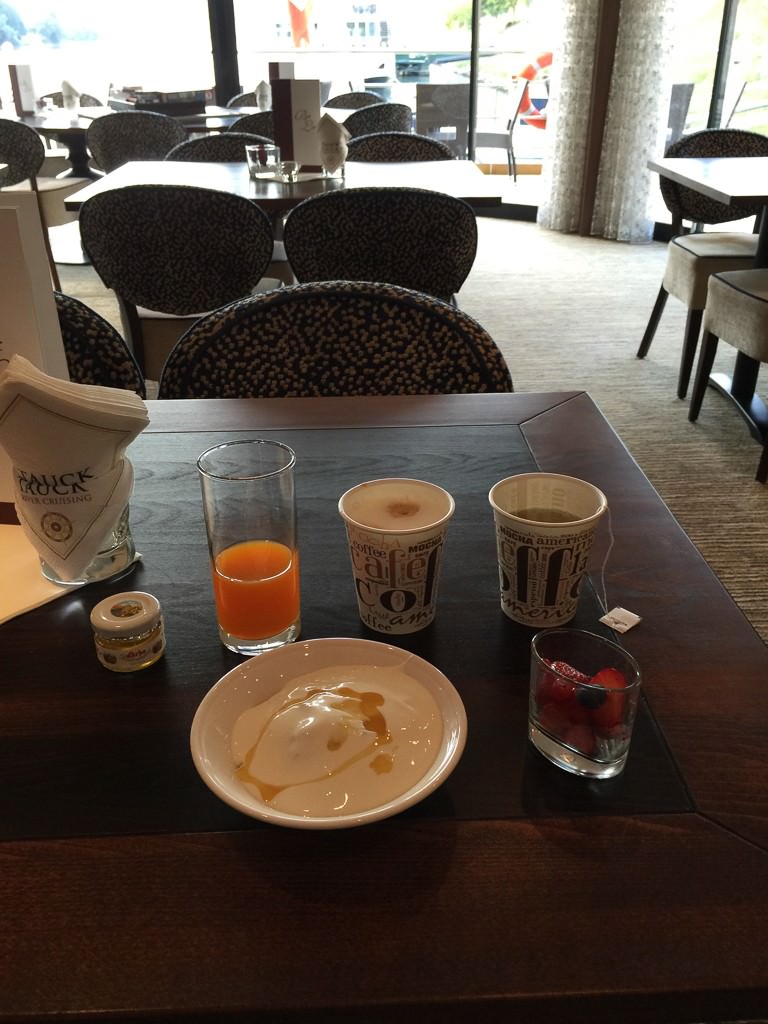 My breakfast in Arthur’s: yogurt with honey over granola with fruit, juice, tea and coffee on the side. © 2015 Ralph Grizzle

I made sure to have a good breakfast, because I was heading out for a 30-mile bike ride using Tauck’s complimentary bicycles.

Straddle A Saddle, Ride To Passau – And Back 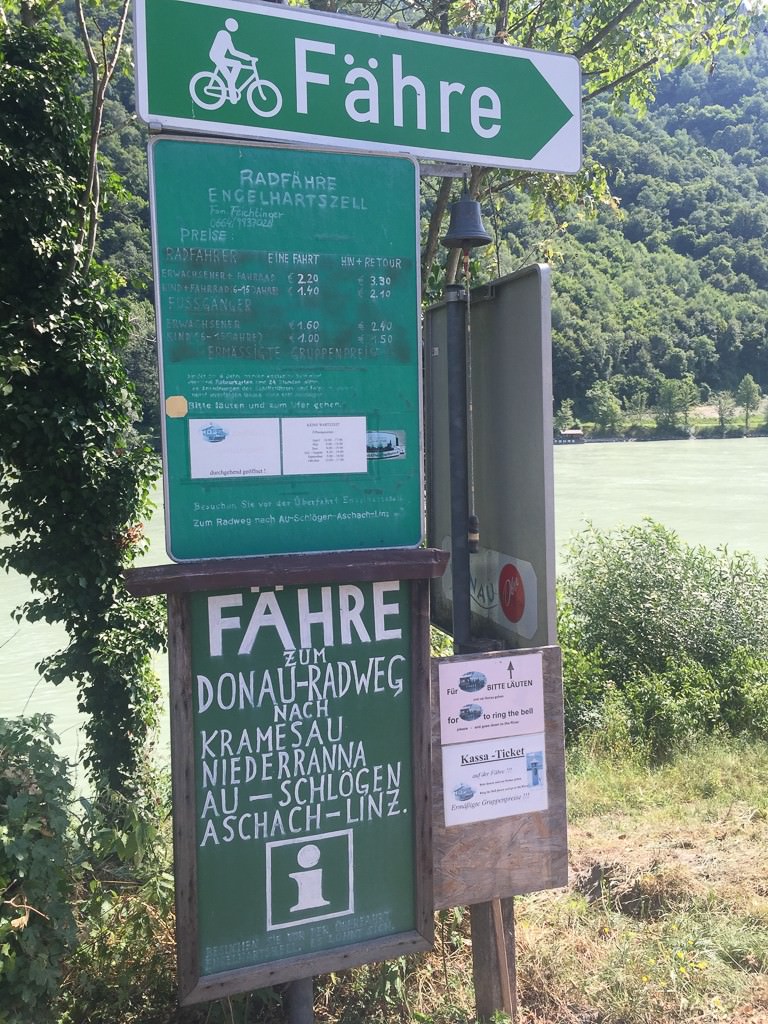 My ride would take me to Passau and back, about 15 miles in each direction. Tauck’s bikes are in good condition, three-speed bikes with foot brakes and seats that can be adjusted to fit my 6’5″ frame. The bicycle infrastructure along the Danube is first-rate, with dedicated bike roads and even bike ferries that transport riders and their bikes across the river at various points along the way. 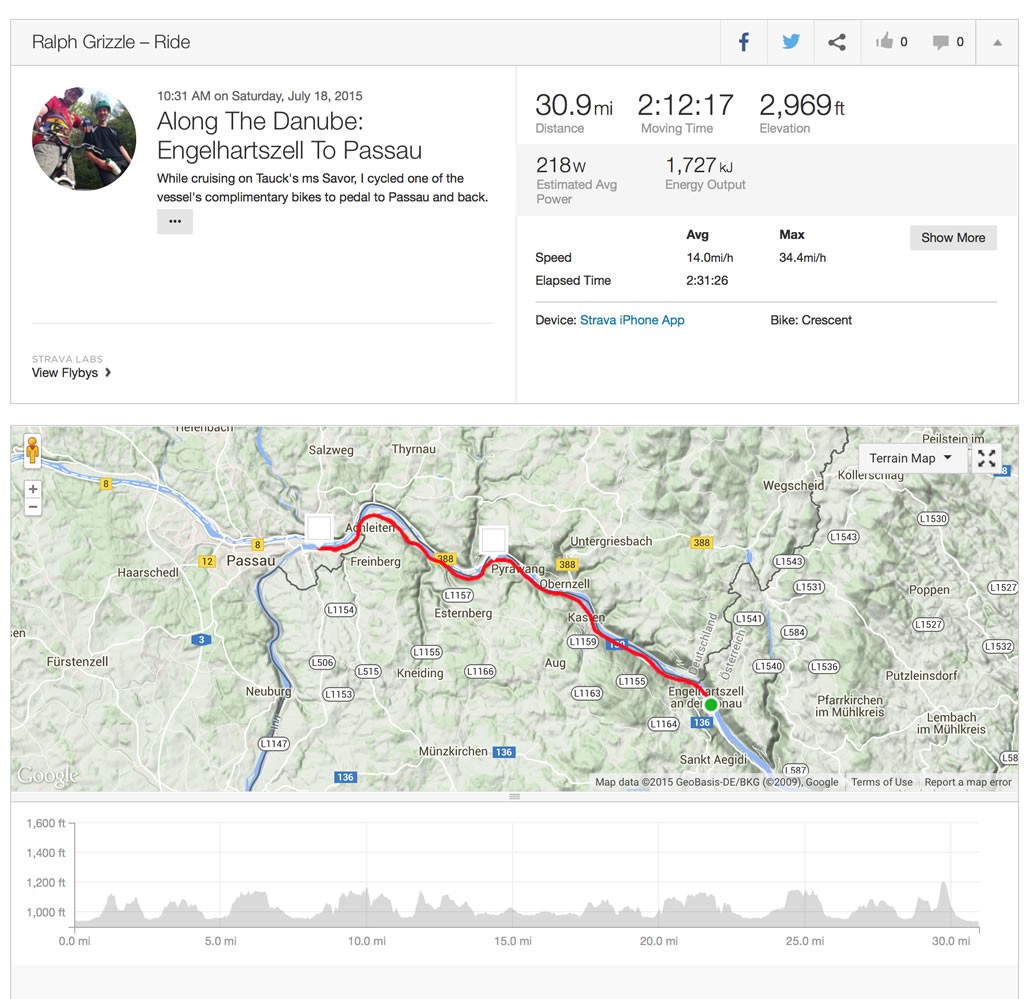 I plan to cycle as often as possible on my Tauck river cruise. Cycling is a good way to get some exercise and see the sights. If you think you’d like to bike and boat, see the short video near the bottom of this post about my experience on one of Tauck’s bikes. 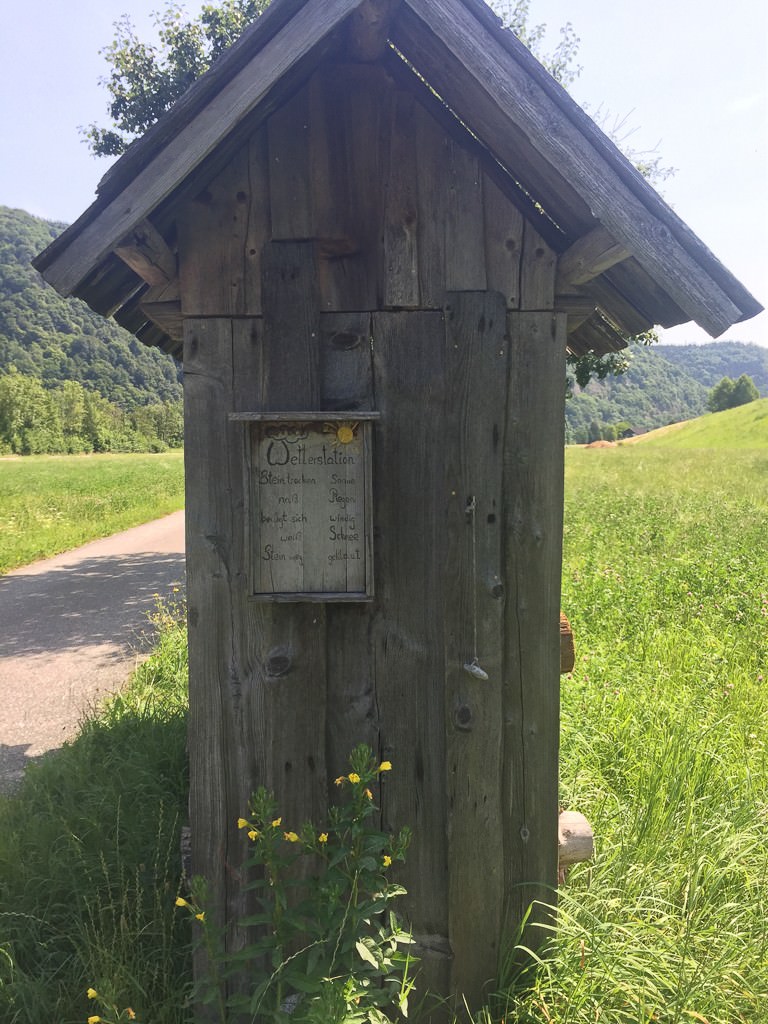 Along the way, I stopped at this “Austrian weather station.” © 2015 Ralph Grizzle 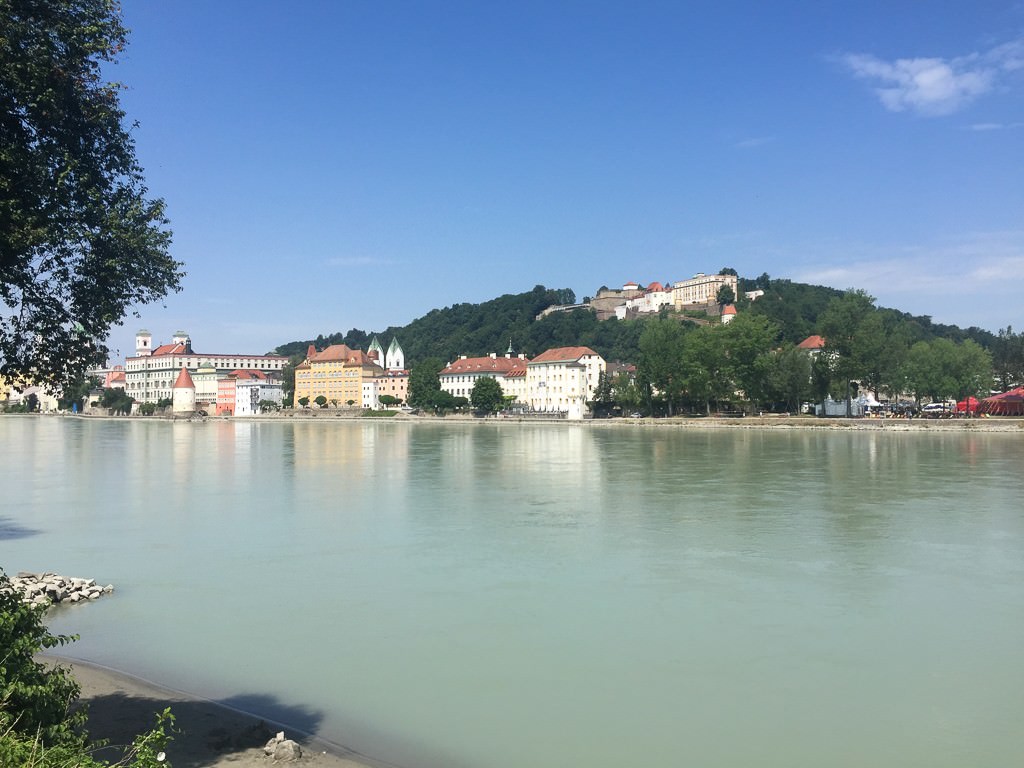 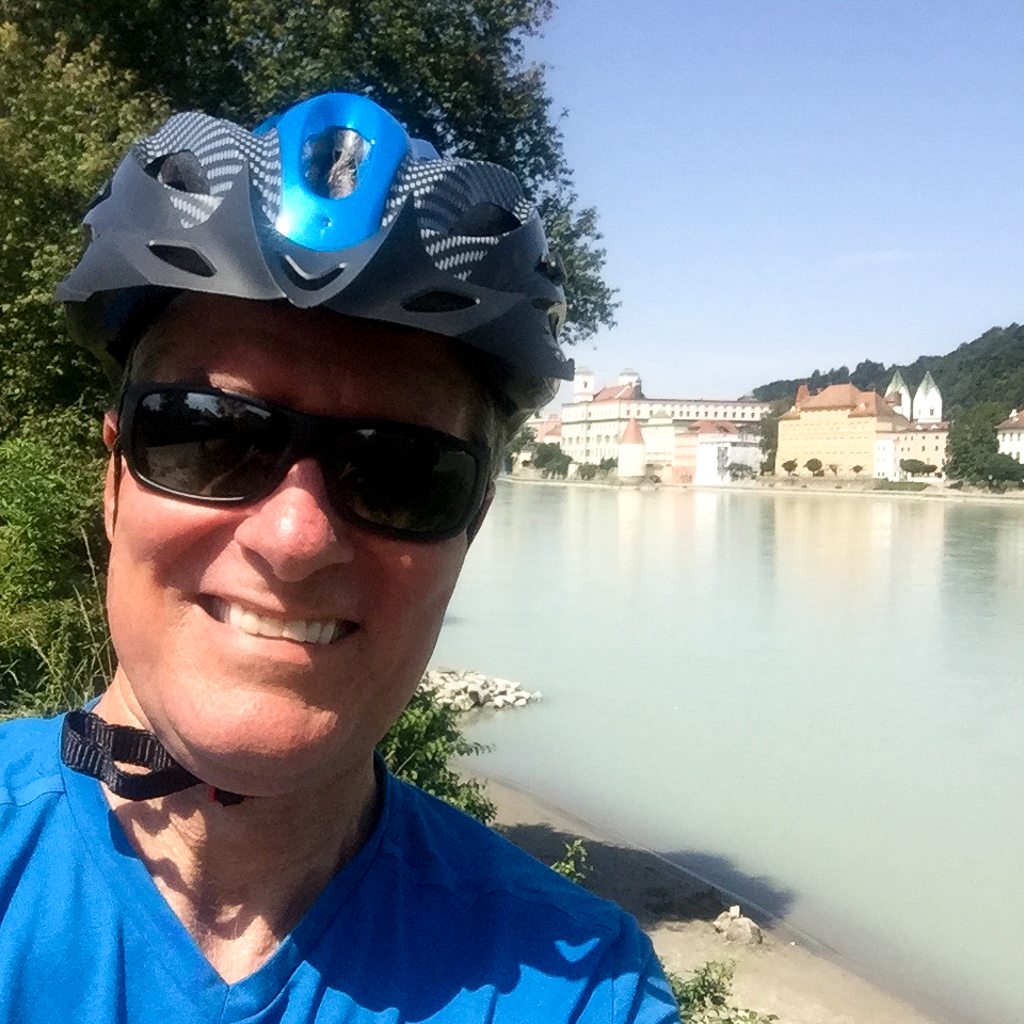 A Bonus, Thanks To Low Water, Pretty Passau

As we were having dinner, ms Savor sailed back upriver to Passau, where we would overnight. We passed through a lock, and after a couple of hours approached the city. It was shortly after sunset and the sky looked as though it had been streaked with pastels. I headed up to the top deck to enjoy the spectacle. With its well-lighted cathedral and historic buildings, Passau was a sight to behold. I’ve approached the city from both directions on the Danube, but always during mornings and afternoons. To approach Passau in the evening was the icing on the cake to an already great day. 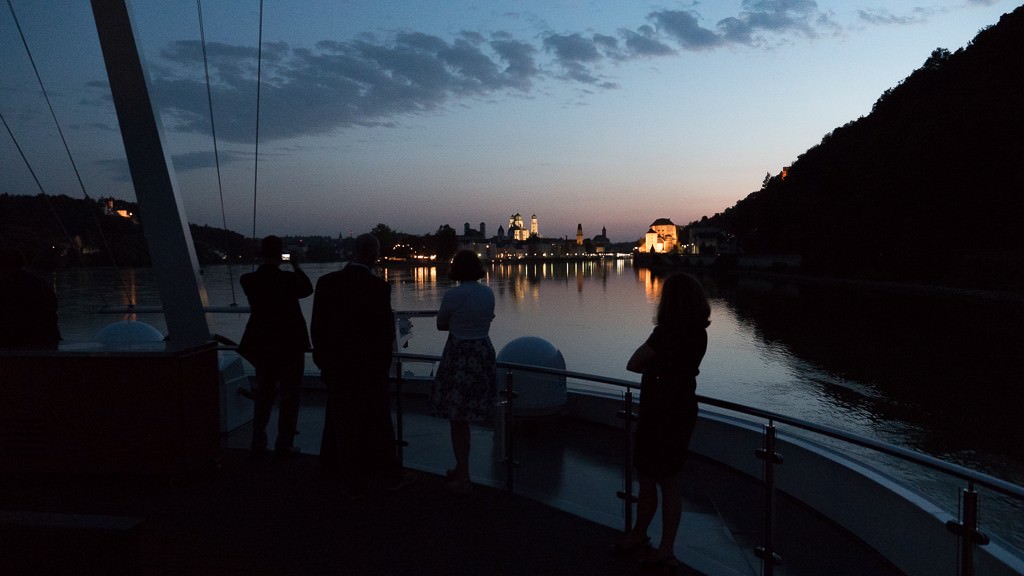 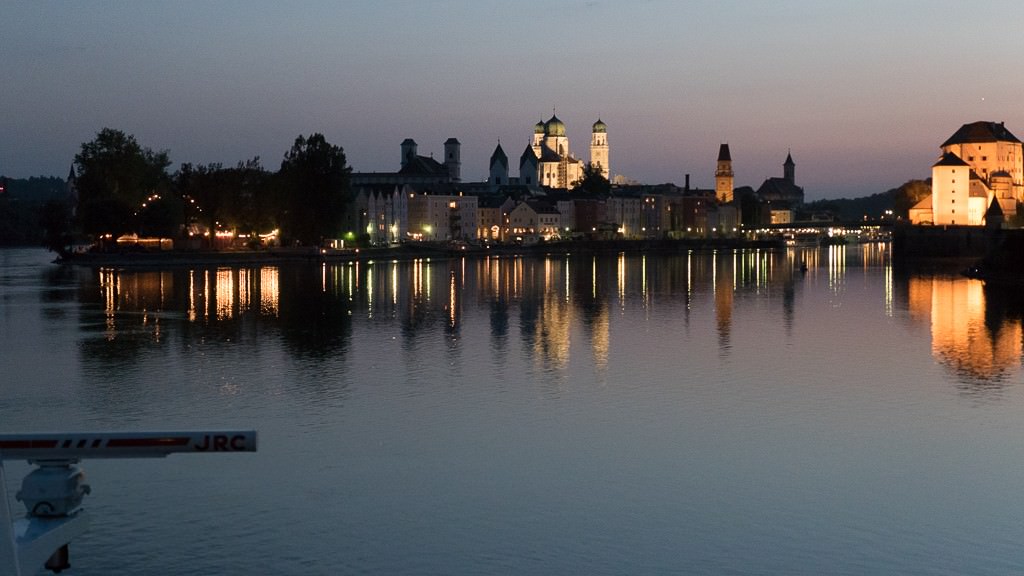 Passau on our approach. © 2015 Ralph Grizzle 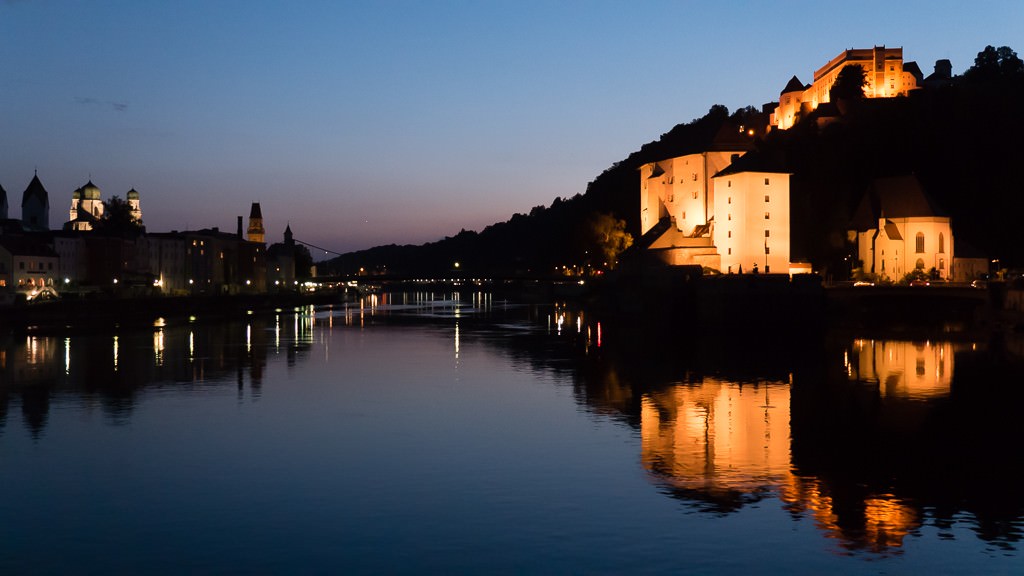