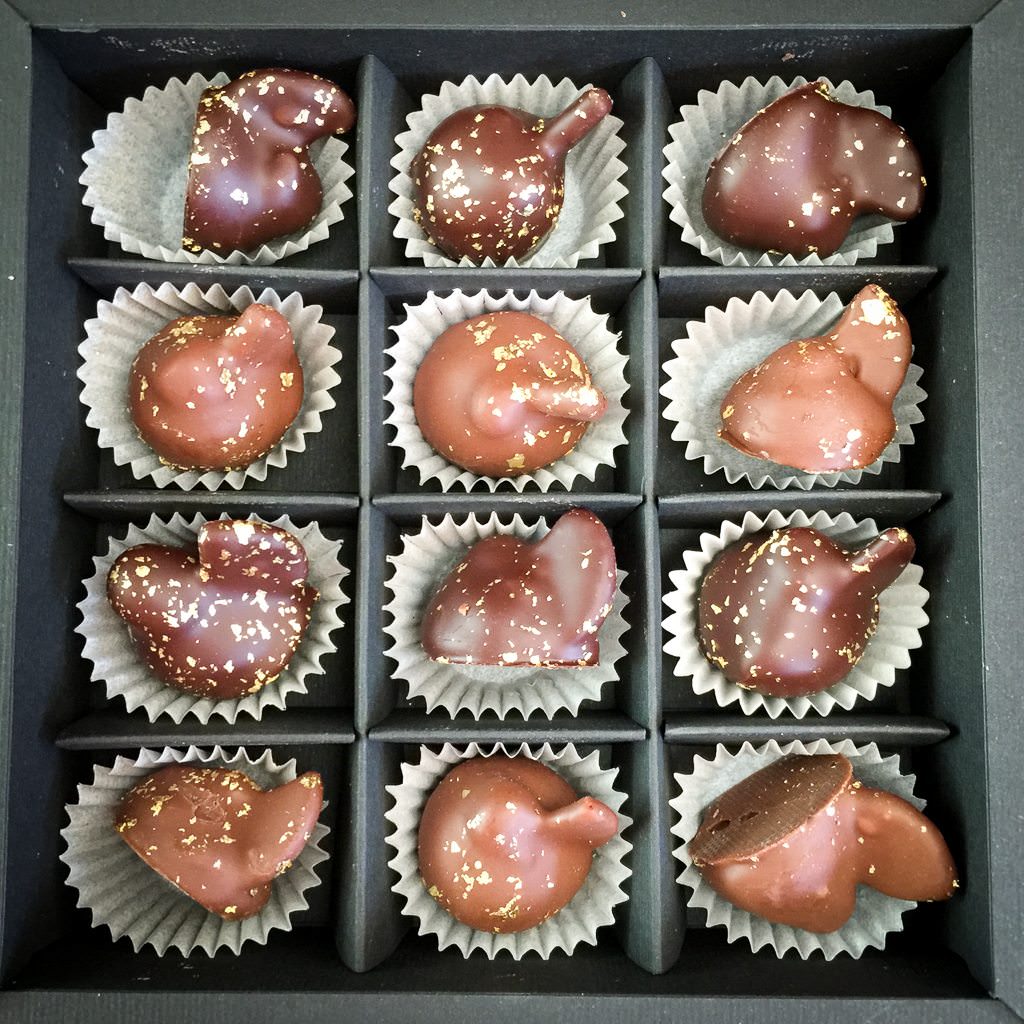 Take a moment to lick the screen if you so desire. Those chocolates taste as good as they look. The “Old Passau Gold Dome Chocolates” are made in Passau by Simon Confiserie. Covered in light and dark chocolate, then sprinkled with specks of 23-carat gold leaf, these works of art are made with apricots and Nußtrüffel with a “tail” made of caramelized almonds.

This morning, we watched a demonstration of how the chocolates were made, and of course, sampled them. Our Tauck tour director Sinead brought back a few boxes, priced at 18.90 euros each, for anyone who might have missed the presentation and to share with ms Savor’s crew. Through gestures like these, Tauck’s tour directors continue to surprise me. Yesterday I wrote about a couple of the things that differentiate Tauck in it competitive set. Surprising guests is yet something else that sets Tauck apart. It is enough for a company to meet expectations, but so far, Tauck has been exceeding expectations, and today was no exception.

Though I had been here many times, I enjoyed strolling Passau. More than 2,500 years old, Passau was once a Roman outpost, situated at the confluence of three rivers. Today, the quintessential Bavarian town brims with pastel patrician houses, cozy cafes, romantic cobblestone lanes and riverfront promenades.

Tauck offered us two tours, a walking tour that promised to immerse us in the storybook mix of Roman, Italian Baroque and German Gothic architecture. We’d visit St. Stephen’s Cathedral with its famous organ and stroll by the the 14th-century Town Hall (Rathaus) adorned with murals commemorating scenes from the Nibelungenlied, an epic poem believed to have originated here in the 12th century.

Optionally, we could hike to a hilltop fortress where Passau’s prince-bishops once resided. I would have loved to have seen that view, but I saved my energy. As I have said before about river cruising: You have the freedom and the resources to design your own experience. My plan was to bicycle from Passau to Linz, a distance of 90 kilometers that would take me five hours to complete. 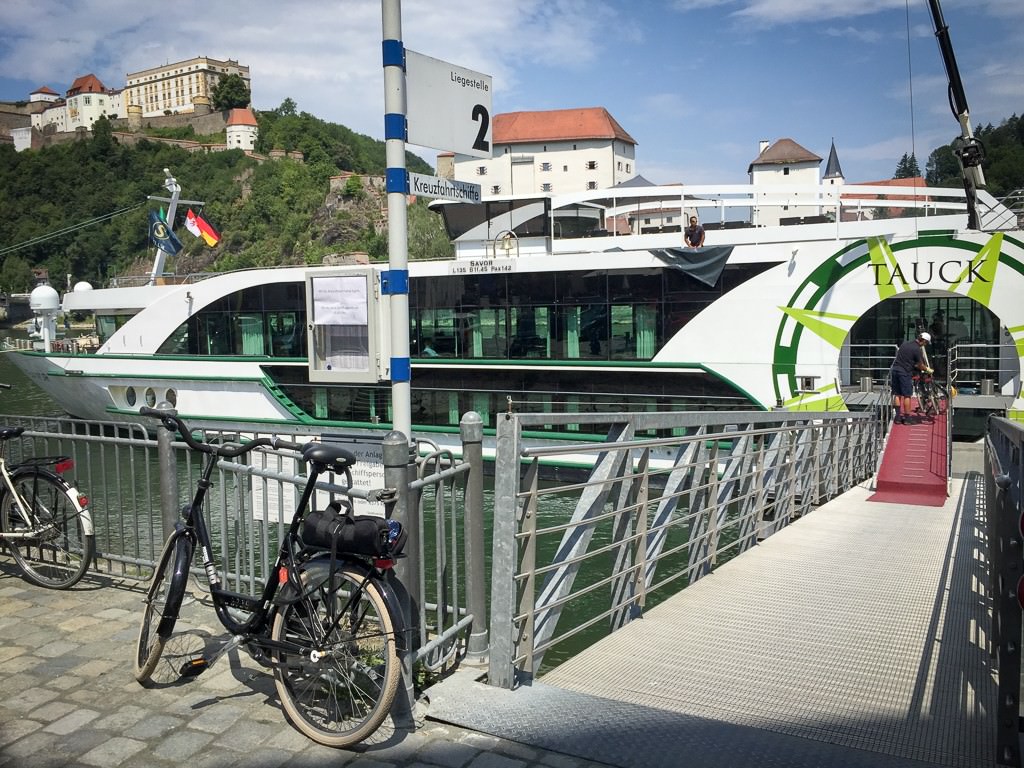 I am aware that bicycling is not for everyone, but what I’ve discovered on this river cruise and on others is that there are quite a few folks who want to pedal if only they were encouraged to do so. I speak from years of experience when I say that bicycling is one of the best ways to experience Europe. Moreover, the cycling along the Danube is quite easy, flat for the most part and on dedicated bike roads with other like-minded people. In fact, at age 57, I feel like the runt of the litter. I consistently see people who appear to be 10 to 20 years older than me. 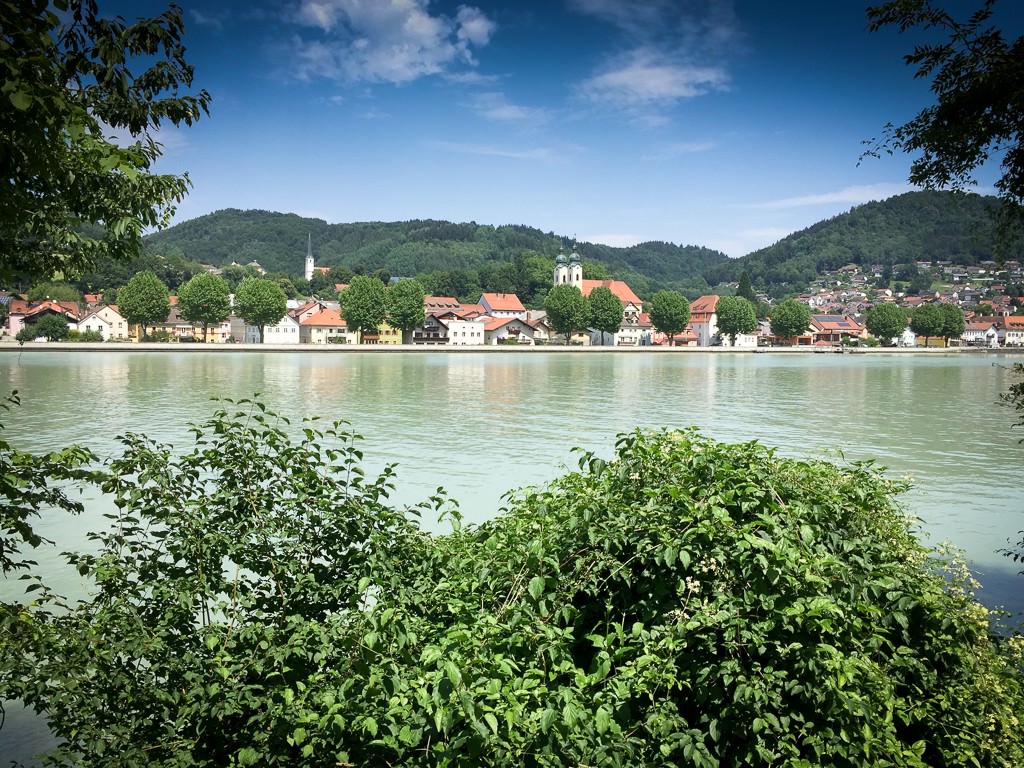 I left Passau at about 12:15. Temperatures were projected to be scorching, so I had packed plenty of water and carried enough euros to take me 60 miles downriver (meaning money for ice cream and more water). People often ask me, particularly on days like today when temperatures will reach more than 32C (90F), if it is not too hot to be out on a bike. What they fail to realize is that when you’re traveling at 20 kilometers an hour, you’re creating wind that has a cooling effect. Many of the bike lanes are shaded also, so that you’re not fully exposed to the sun. It’s important to stay hydrated, of course, and I had a few liters of water with me.

The scenery, as you might expect, was absolutely stunning. I pedaled along the Danube on dedicated bike roads for the first 15 miles, back to Engelhartszell an der Donau where we had docked yesterday. As I rode along, I saw river cruisers and barges making their way up and down the Danube. They were as graceful as swans on the river, gently parting the water as they made their way up and down stream. The river traffic, the beauty of the day, the cyclical spinning and the endorphins kicking in — all of it conspired to create something very much like a sense of euphoria. Life could not have been better. 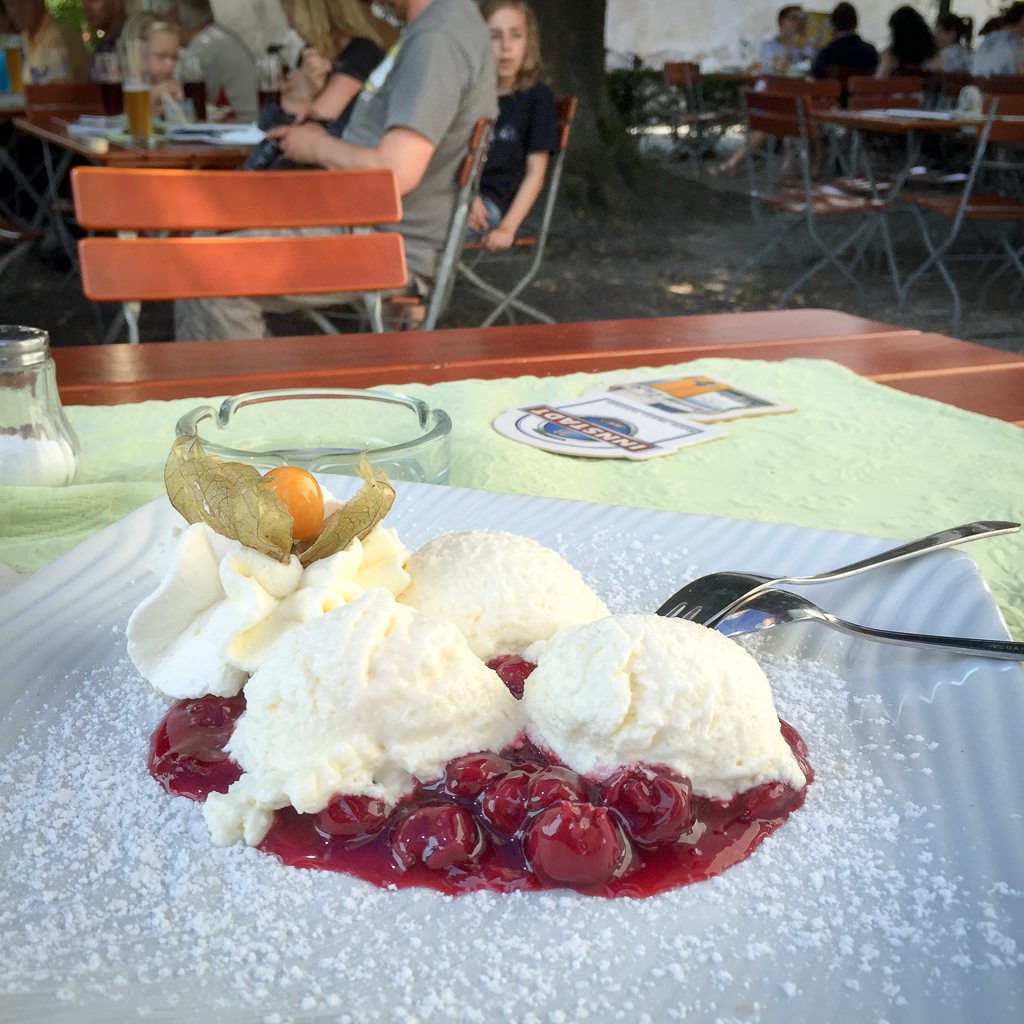 I crossed the river via a lock and stopped for “fuel” at a biergarten alongside the river. I figured that ms Savor would be coming along any minute now, and so after inhaling the dessert, made from cherries and some sort of cultured cream, I headed back to the lock to capture ms Savor on video. Here’s what it looked like …

I rode along for another five minutes to cross the river on a “bike ferry” for the reasonable sum of 2 euros. As we crossed, ms Savor came sailing by. She was a beauty. I arrived on the other side of the river and began pedaling toward Linz. Shortly, I lost the bike lane and was forced to share the road with cars, which I am not comfortable with. Traffic was thin, a good thing, but I wondered if I would not have been better off staying on the other side of the river, something for anyone considering this trip to research. There are many opportunities to cross the Danube, either on bike ferries or via bridges.

The road I was traveling began to wind away from the river and up and down steep hills, which you can see in the photo below in front of the bike ferry on the opposite shore (the bike ferry photo below is from another trip in April when it was cooler than today, hence the riders in jackets and vests). To make matters worse, the road was exposed to the sun. I had consumed lots of water, but I was beginning to feel dehydrated. I worried that the road might be like this all the way to Linz. 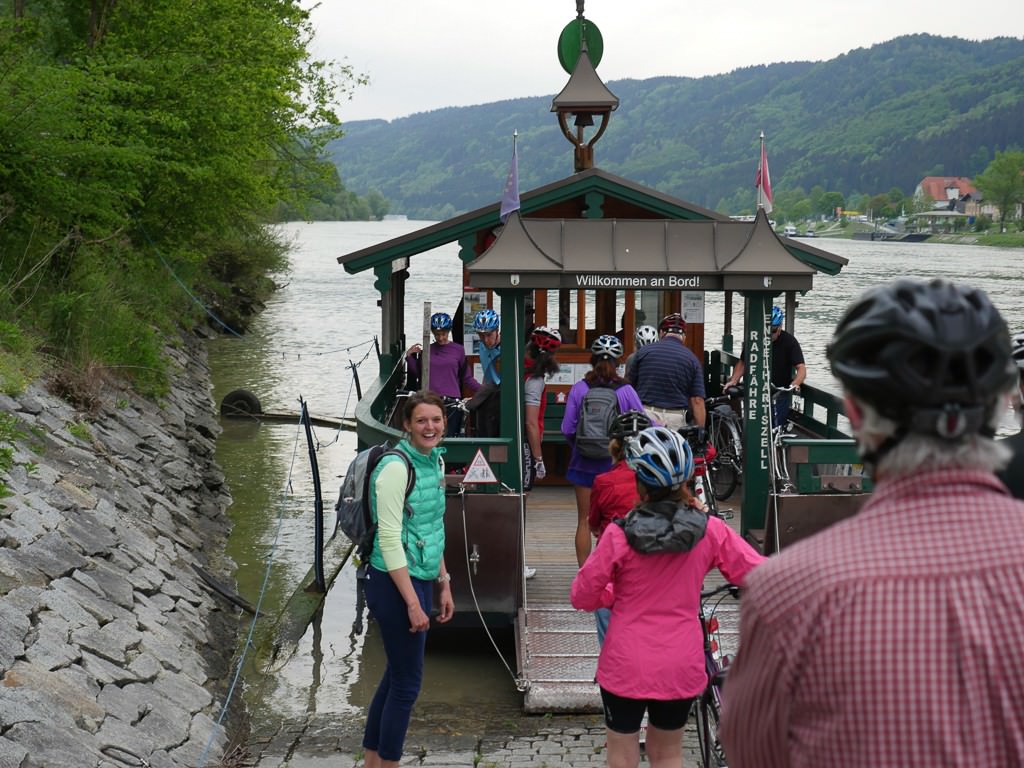 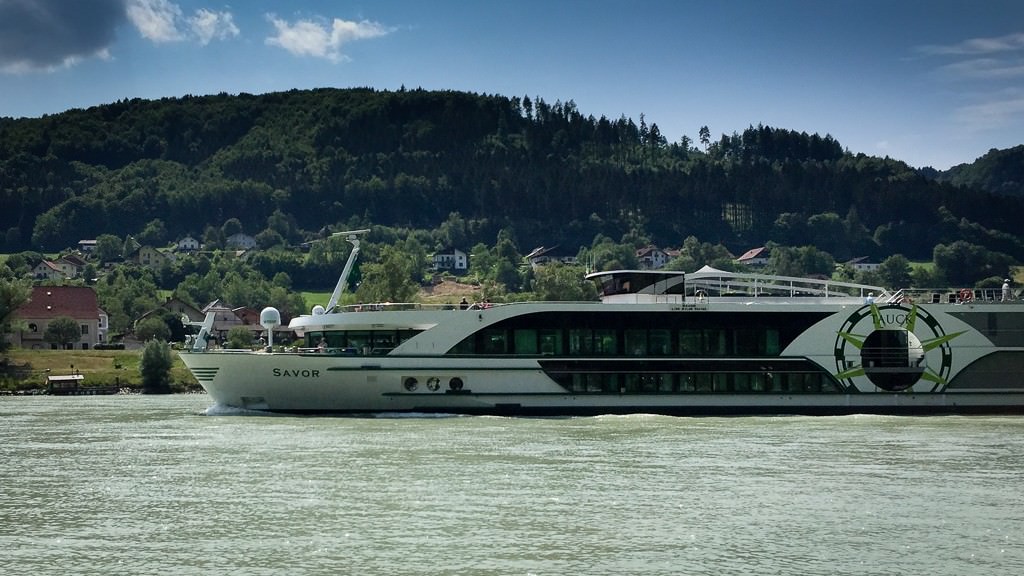 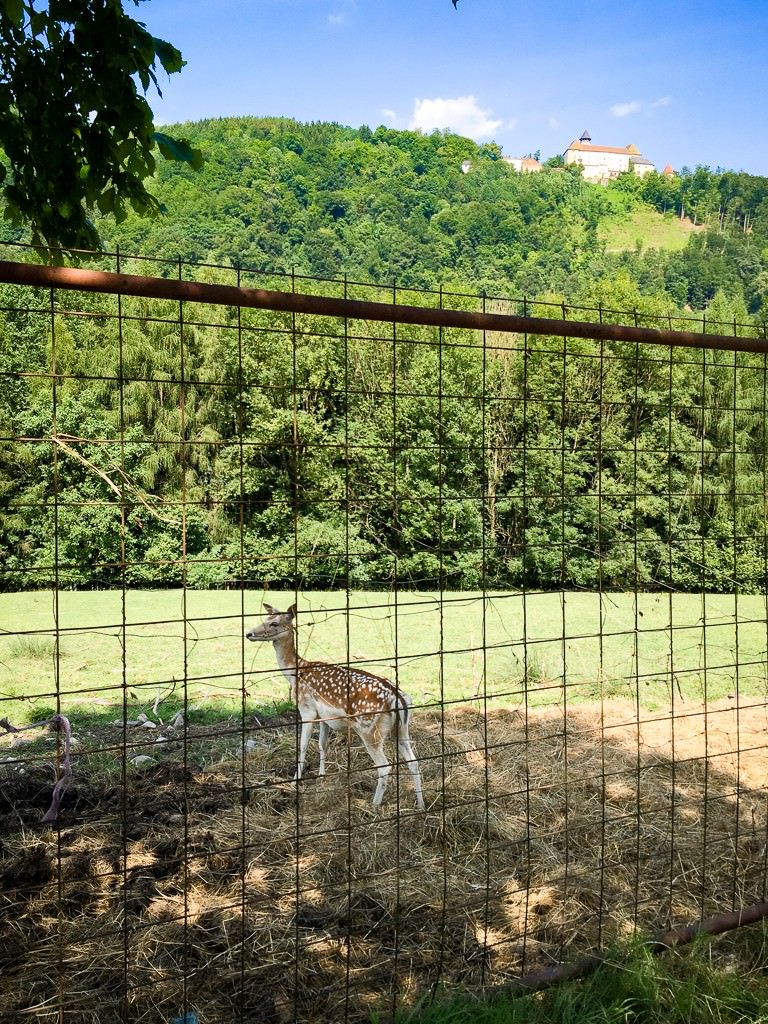 Fortunately, after about 45 minutes of riding, the road flattened out and joined the river again. I stopped for water in Schlogen, where the river cruisers navigate a serpentine route that forms an S. I rode alongside the river, shaded and in the company of other riders who were enjoying the day. The hills and heat had only temporarily sidelined the sense of euphoria. It was back now in such strength that I found myself singing “The hills are alive with the sound of music … ”

I stopped for more fuel, a banana split this time and a large bottle of water. I was well over half way to Linz, and it was only 4 p.m. Back on the bike I was making good time. At 5:30 p.m. I had only 20 kilometers remaining to reach Linz. I knew I’d be there within the hour. 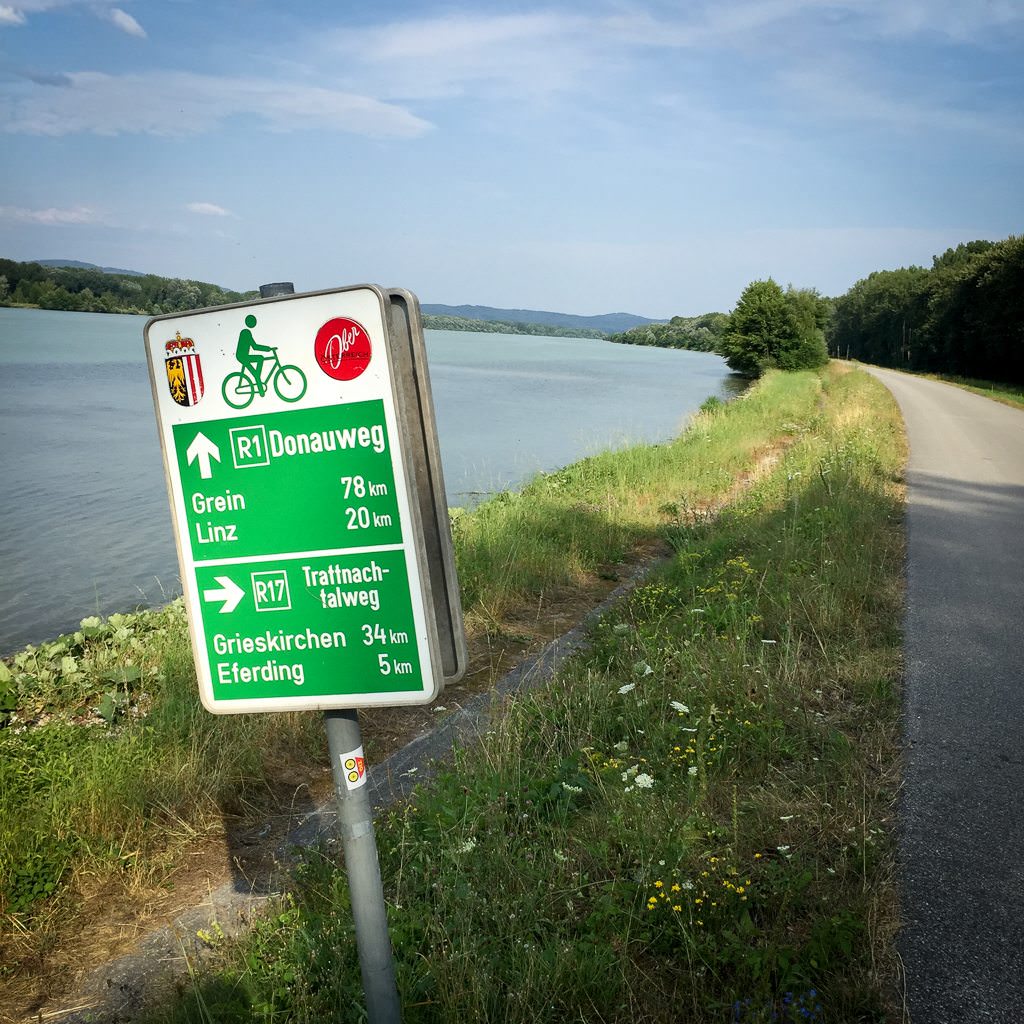 At 6:30 p.m. I arrived, thirsty, tired and jubilant. Tauck’s ms Savor had not reached its dock. I wondered why I had not passed her on the way here. The only place I could have missed the ship was in one of the three locks. At 7:15 p.m., however, I saw a river cruiser making its way to Linz. I quickly jumped on the bike and headed toward the center of the bridge spanning the river. I snapped a few photos of ms Savor passing underneath.