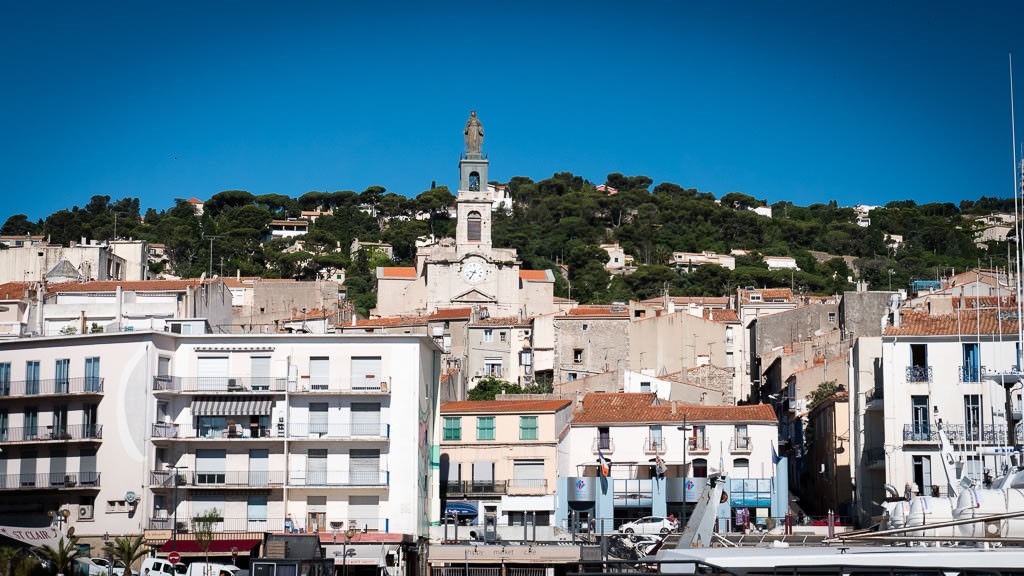 My barge trip from Arles to Sete took place on CroisiEurope’s Anne-Marie June 17 through June 26, with pre- and post-trip overnights and activities. This post picks up on day eight of our adventure, June 24, when we explored Sete.

As noted in yesterday’s post, this morning we have a special tour ahead of us. This tour is not offered by CroisiEurope; rather it’s something I set up for our group: a Gourmet Walking Tour that will allow us to explore Sete’s colorful markets and a few of the food outlets that serve up regional specialities.

Of course, there will be a wine-tasting at the end of the tour. C’est la vie.

In the afternoon, we’ll head out for an oyster sampling along the Étang de Thau. 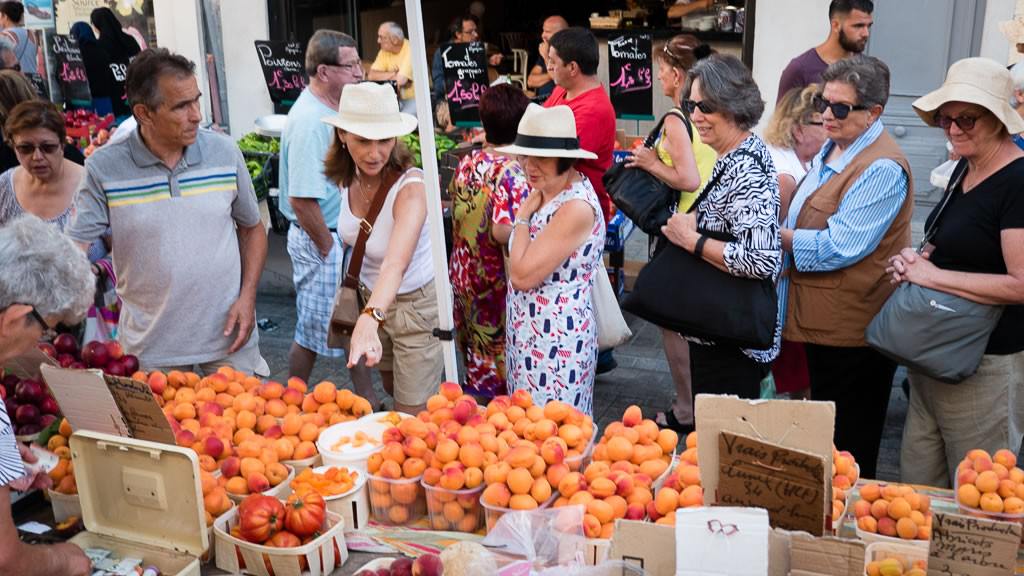 Nancy McGhee, wearing a hat and pictured  far left, pointing at fresh apricots as we tour the outdoor market in Sete. © 2015 Ralph Grizzle

To explore the markets in Sete, we had an expert guide with us. Owner of Absolutely Southern France, Nancy McGhee has been running her top-rated Gourmet Walking Tour for years. A Canadian living in Sete, Nancy consistently gets rave reviews from those who have done her tours, so it was a no-brainer to choose her to lead us through Sete. Hers isn’t just a walk-through-the-markets tour. It’s an educational visit, where we learned such things as how to eat an oyster properly. Funny, I thought I knew. I did not. Chew a little to release the flavor, I learned, and wash it down with a glass of PicPoul de Pinet wine. Best oyster I’ve ever had.

Over the years, Nancy has made many friends at the markets in Sete, which added a personal element to her tour for us today. We did tastings with people who she knows by first name and from them, we learned about the regional fish, meat, fruit and vegetables, along with special recipes.

Sampling olives and mussels inside the market in Sete. © 2015 Ralph Grizzle 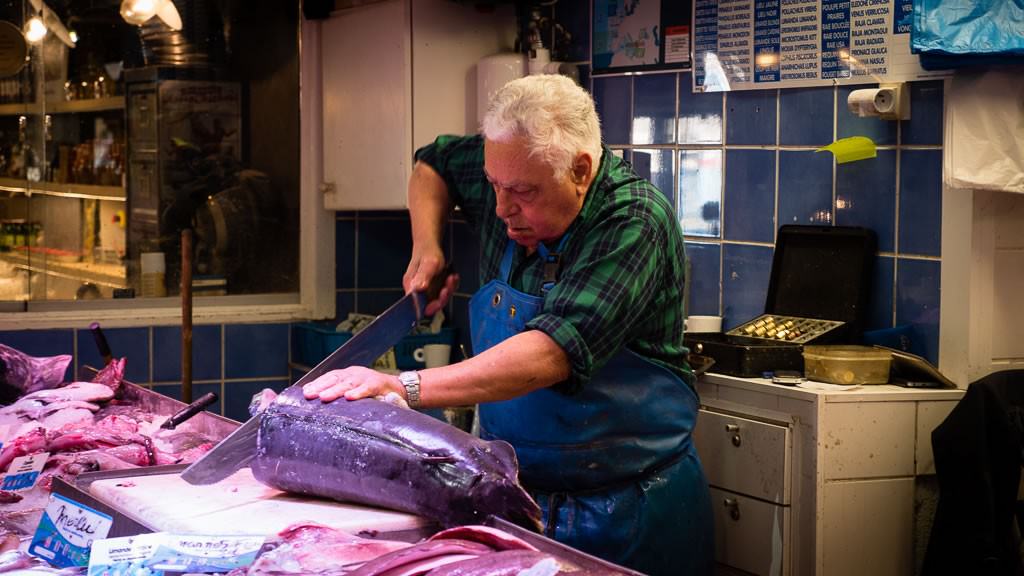 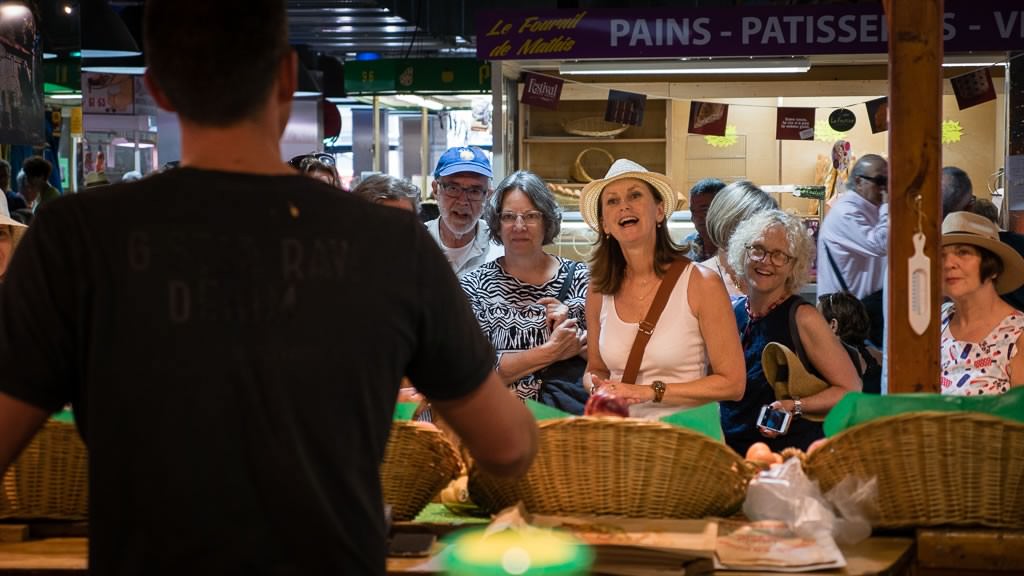 Fun talking with the vendors at the market. © 2015 Ralph Grizzle 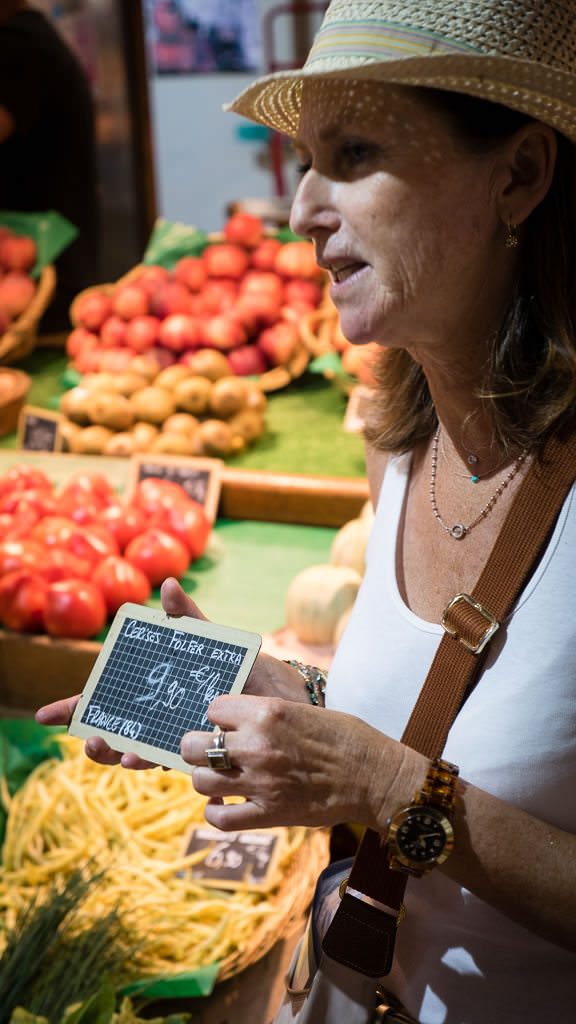 Nancy shows us how cherries are priced according to their category/quality. © 2015 Ralph Grizzle 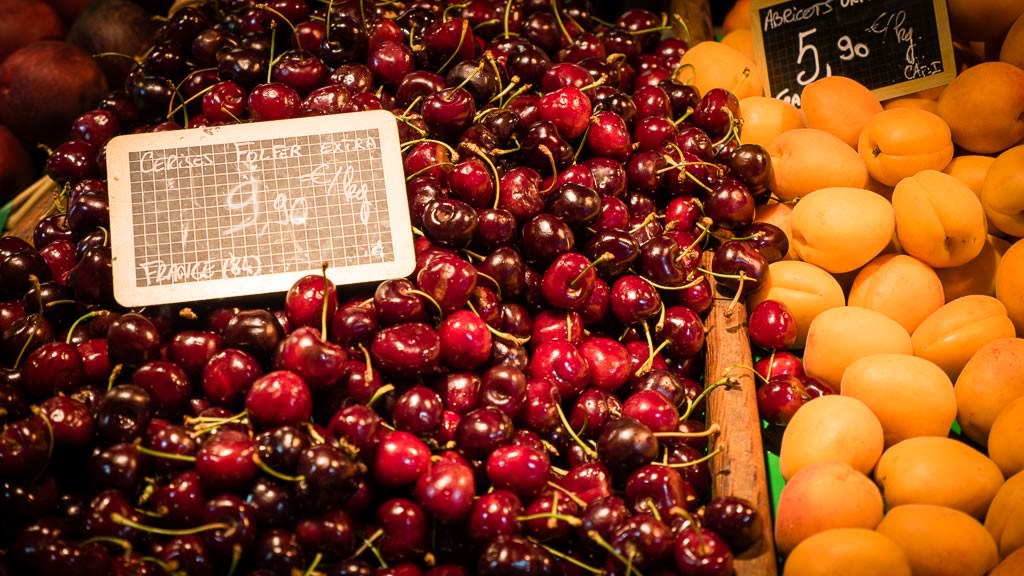 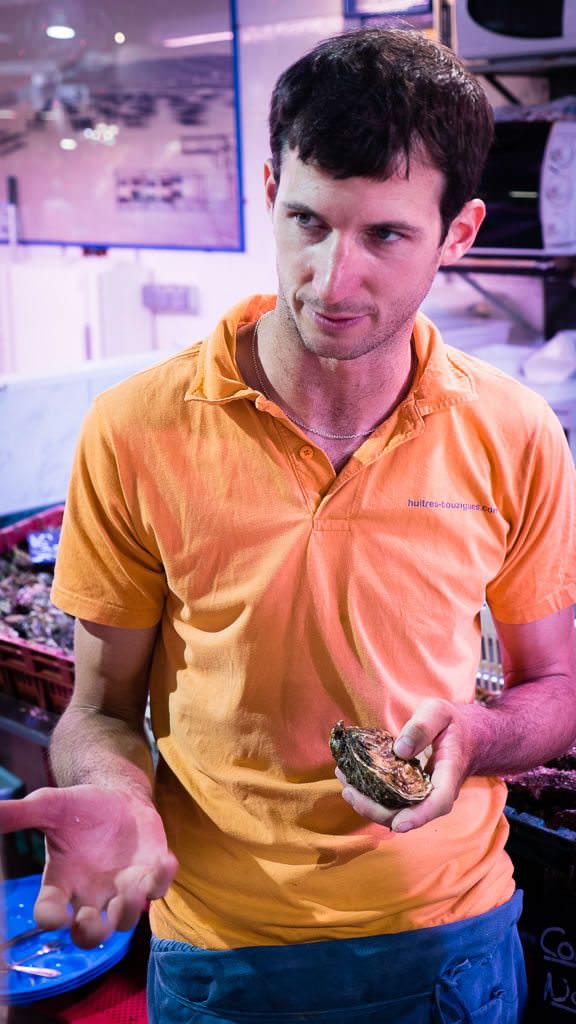 We learned how to eat an oyster, the French way.© 2015 Ralph Grizzle 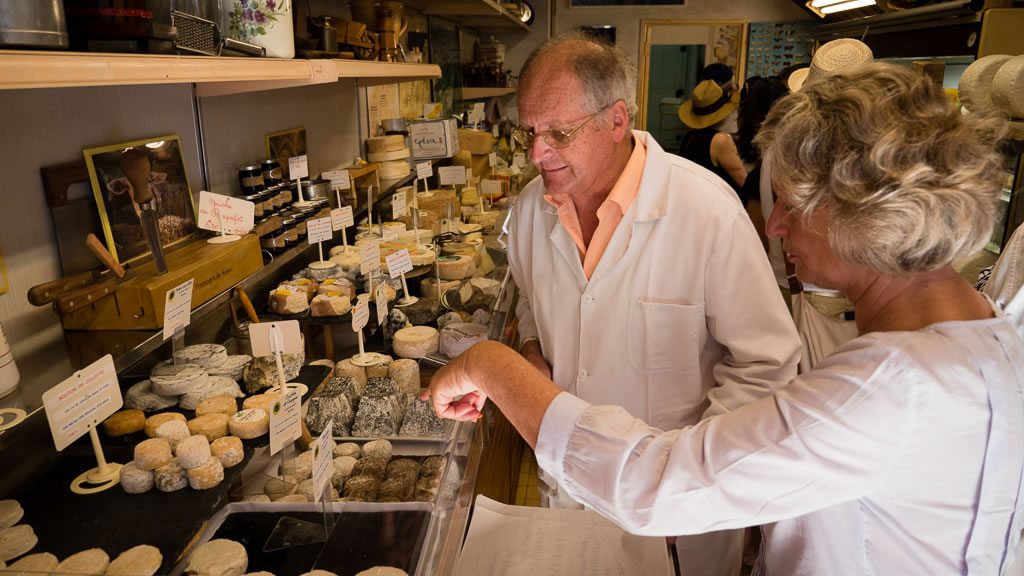 We stopped at a local cheese shop. © 2015 Ralph Grizzle 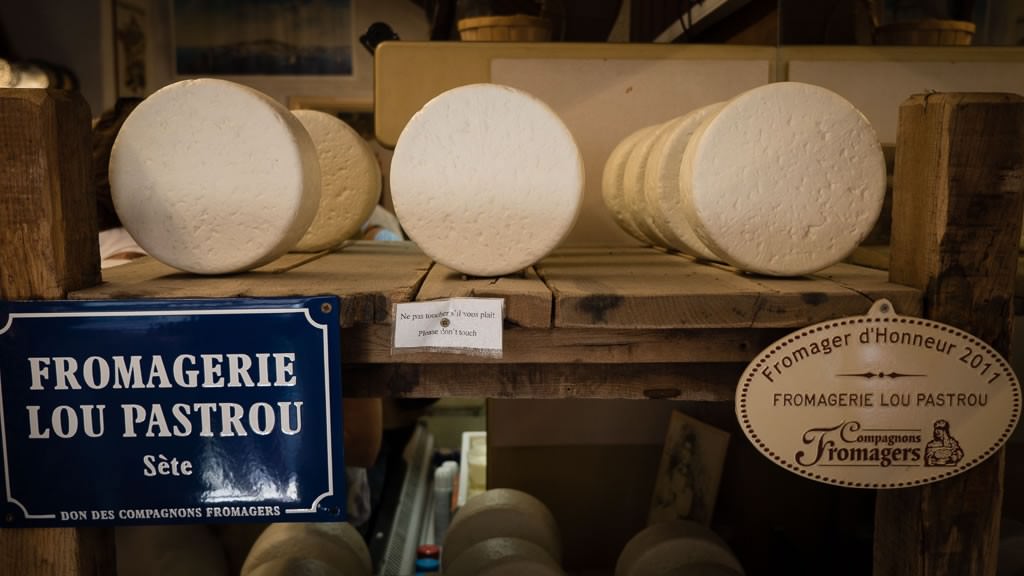 Like works of art, wheels of cheese. © 2015 Ralph Grizzle 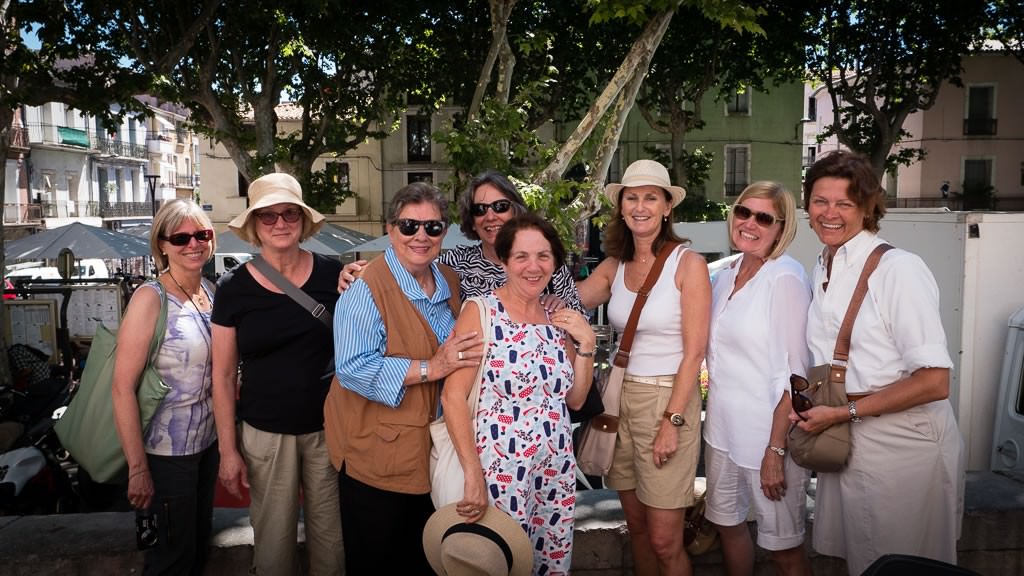 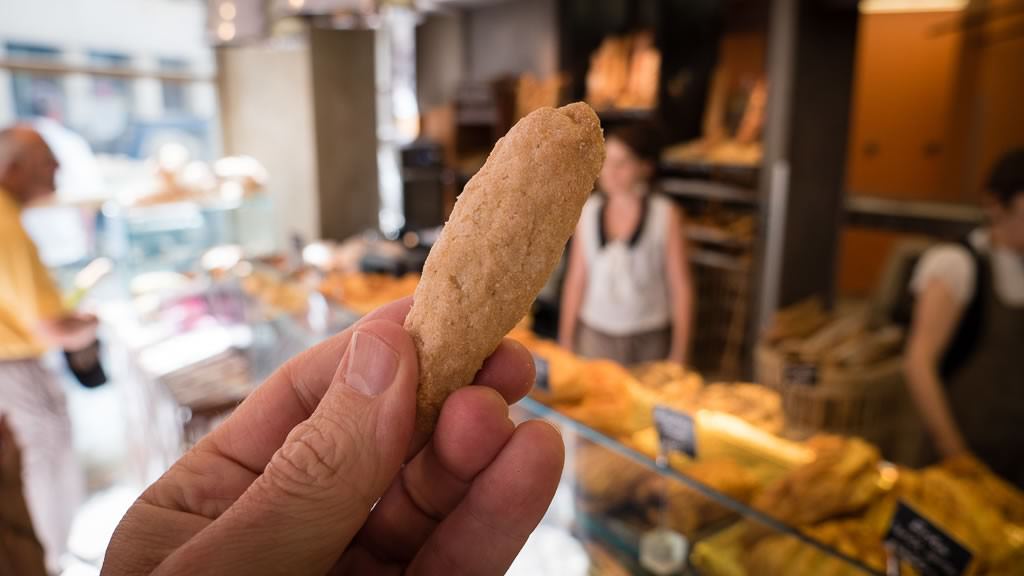 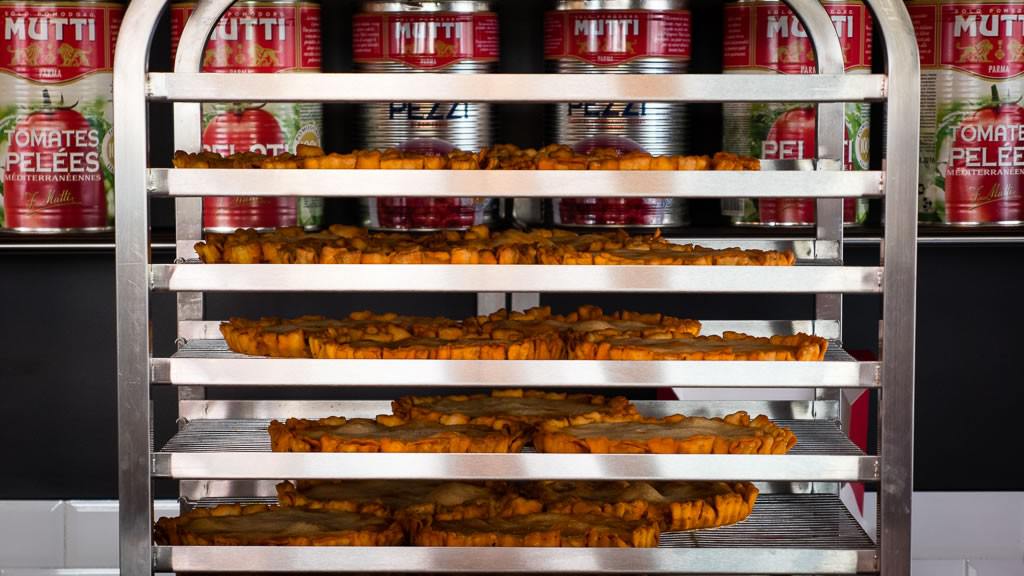 We visited Sophie Cianni & Company, which specializes in Tielle, an octopus pie that was imported from Gaeta to Sète by Italian immigrants in the late 19th century. © 2015 Ralph Grizzle 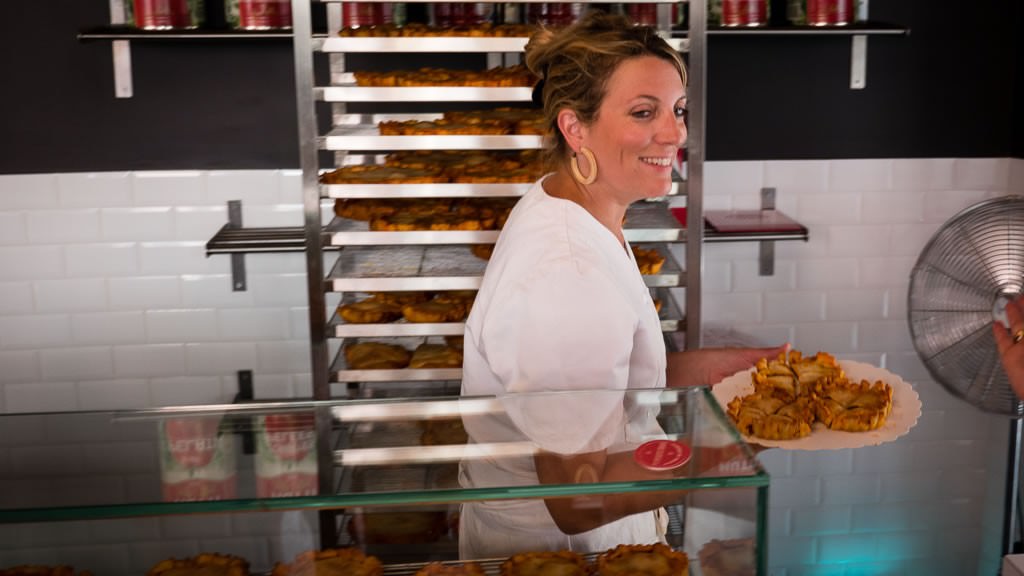 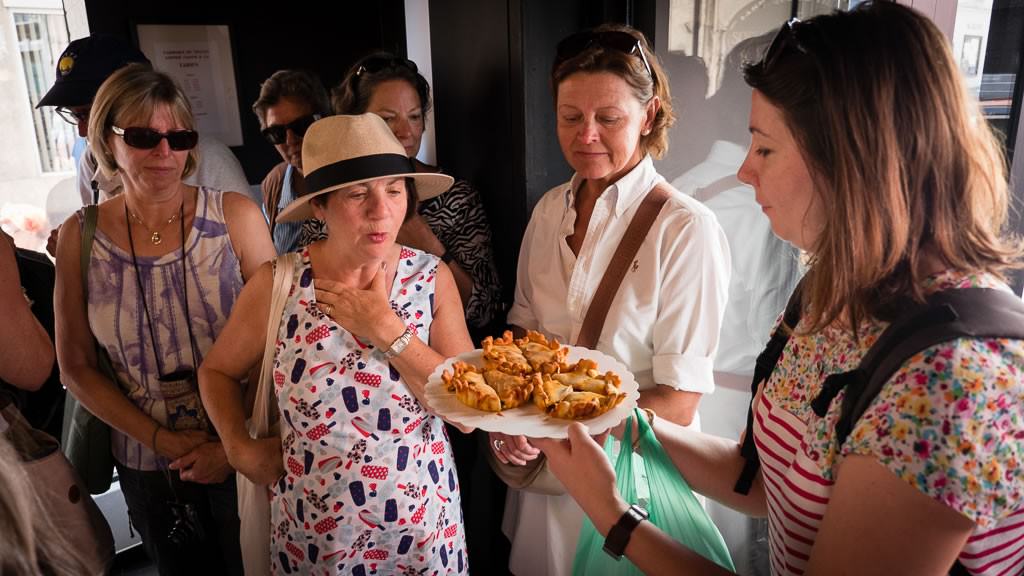 Samples for everyone. The taste? A little like pizza. © 2015 Ralph Grizzle 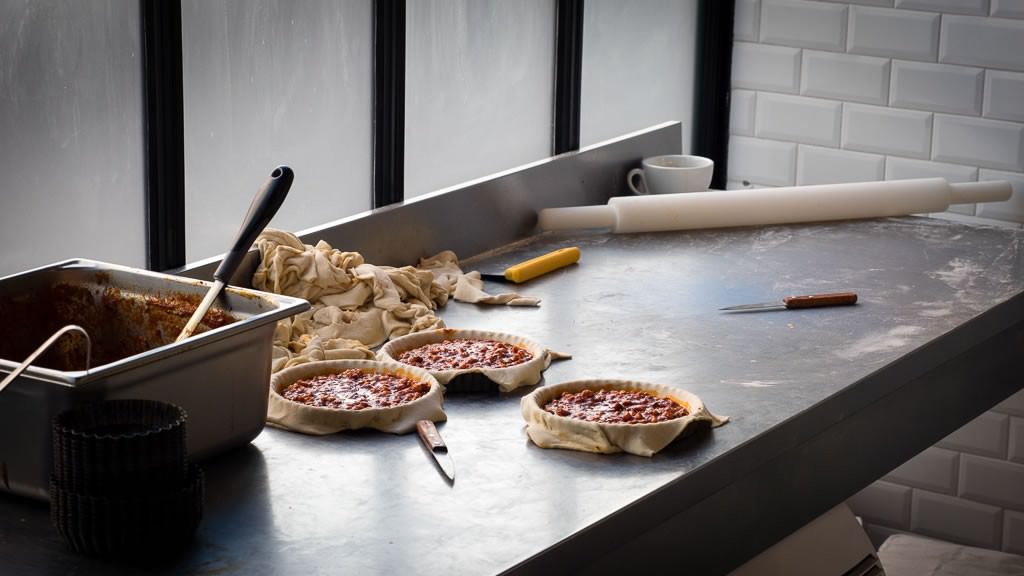 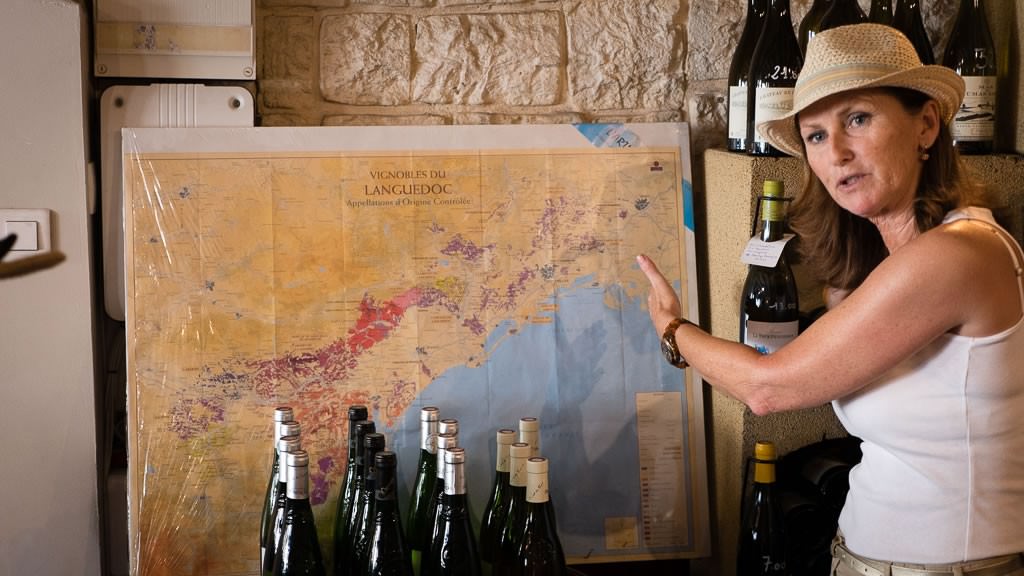 Nancy informs us about the largest-wine producing region in France, the Languedoc. © 2015 Ralph Grizzle 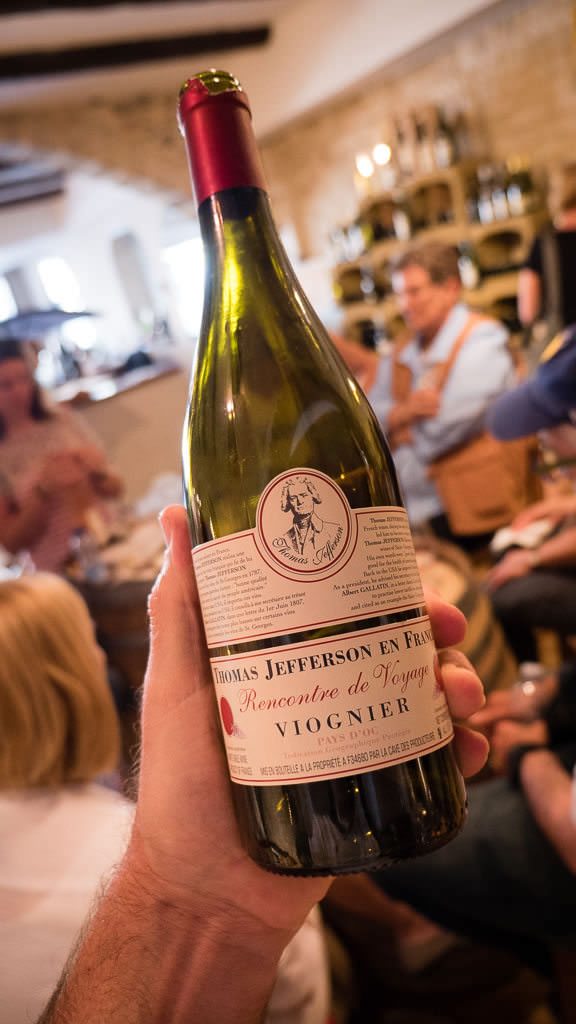 Thomas Jefferson enjoyed the wines of this region. © 2015 Ralph Grizzle 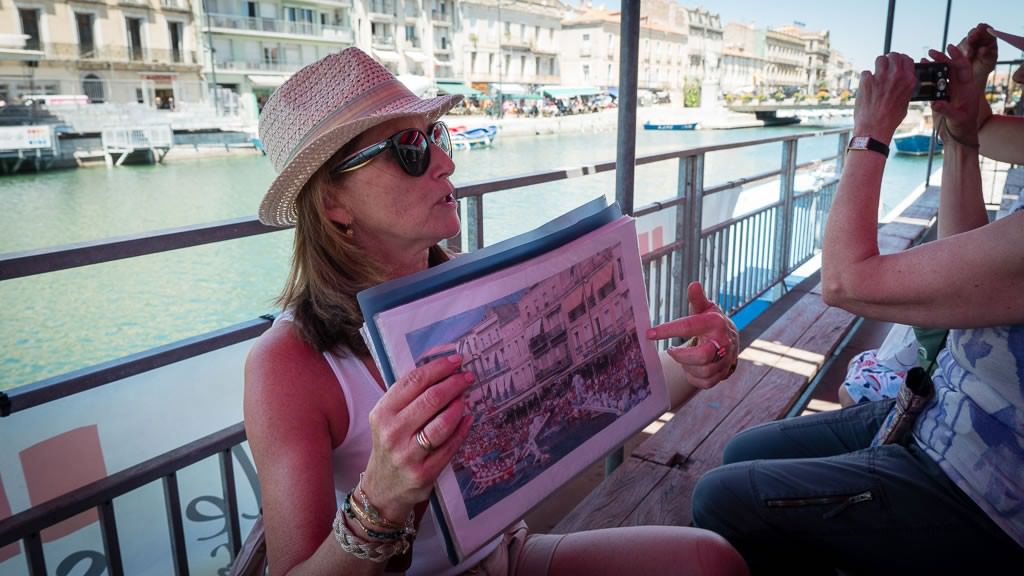 Lunch on Board Anne-Marie

After our Gourmet Market Tour, we returned to Anne-Marie for lunch. Better go light. We’d had a morning of sampling, and in the afternoon, we had an afternoon excursion to sample fresh oysters along the Étang de Thau, the second largest lake in France. 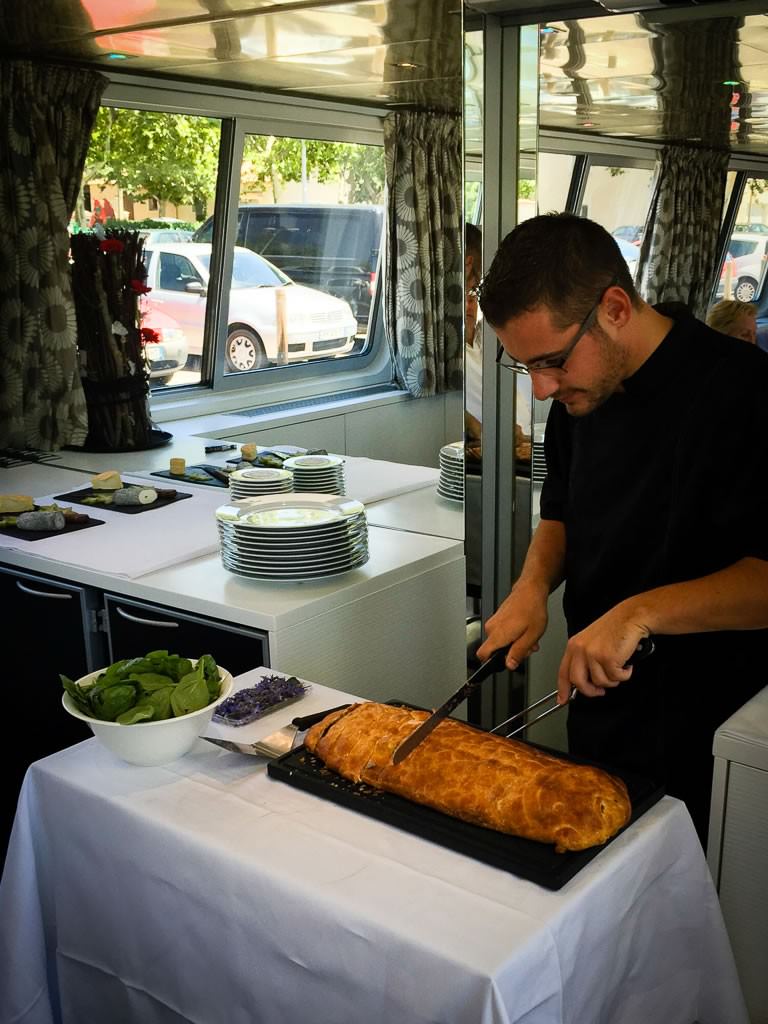 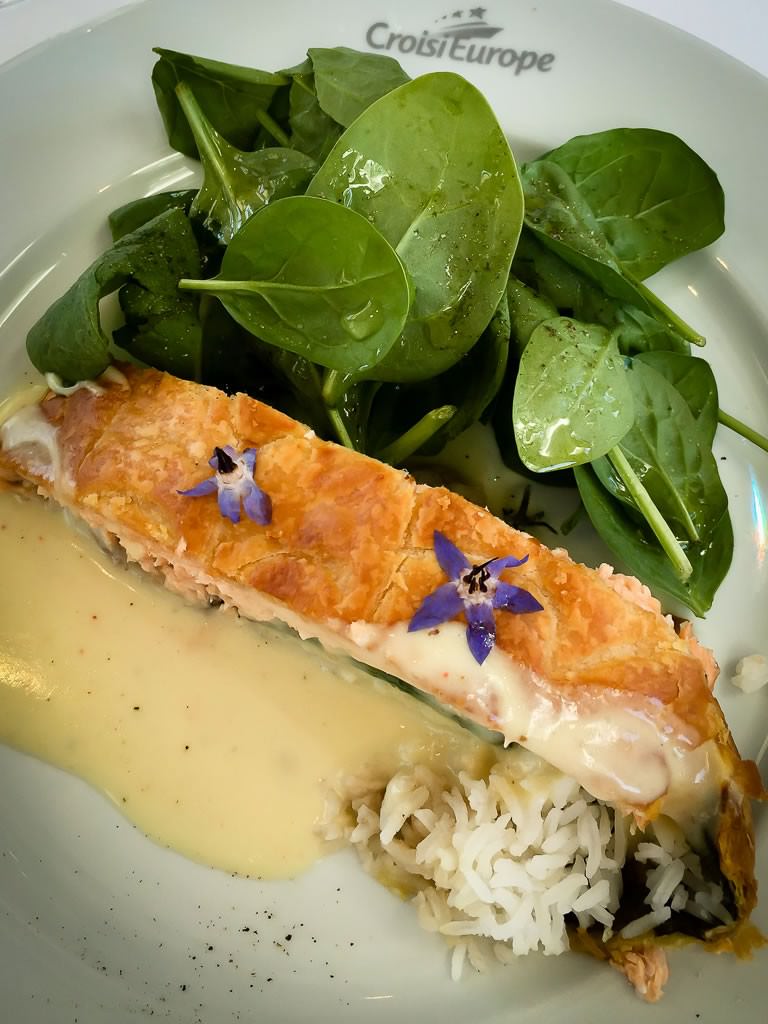 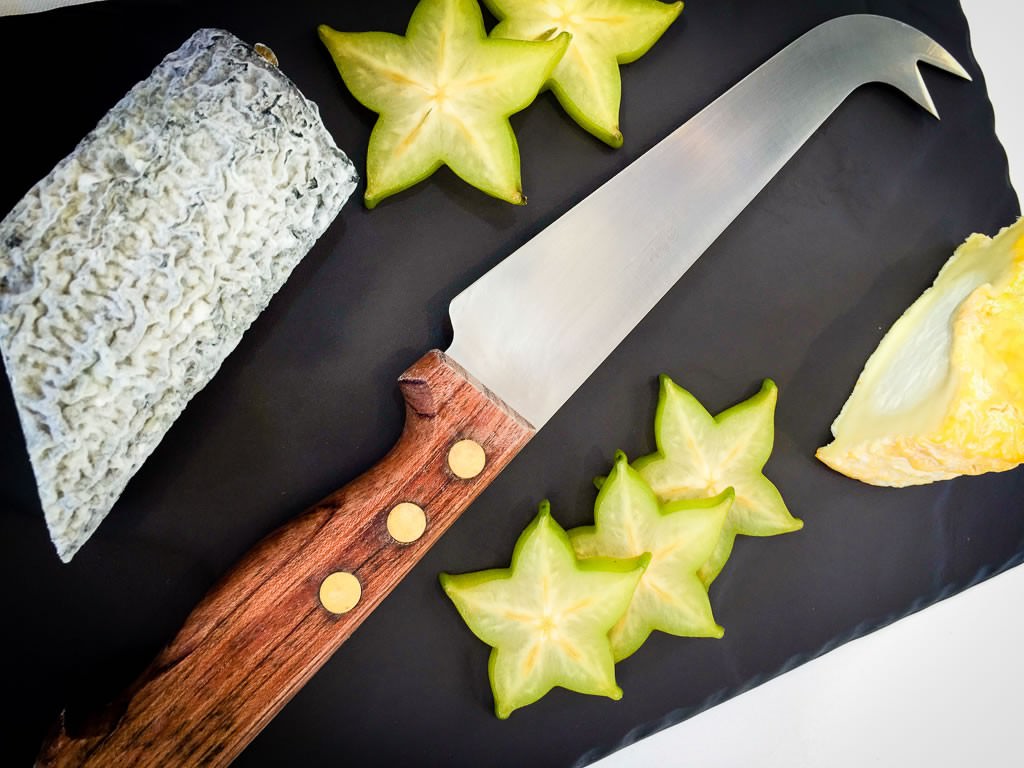 We headed out to the Étang de Thau after lunch. The basin is composed of several lagoons, and connects t0 the Canal du Rhone, Bordeaux, Sète, and the Mediterranean.

The Étang de Thau is dotted with harbors, villages, and beautiful landscapes. The northern part of the basin is mostly occupied by fishing villages. These villages not only produce delicious fish, but also a large supply of fresh shellfish, especially oysters. Because of the high quality of the water in the basin, the product doesn’t have to be processed, and can be eaten as soon as it is harvested.

We visited an oyster museum and later sampled fresh oysters, with a local wine — of course. 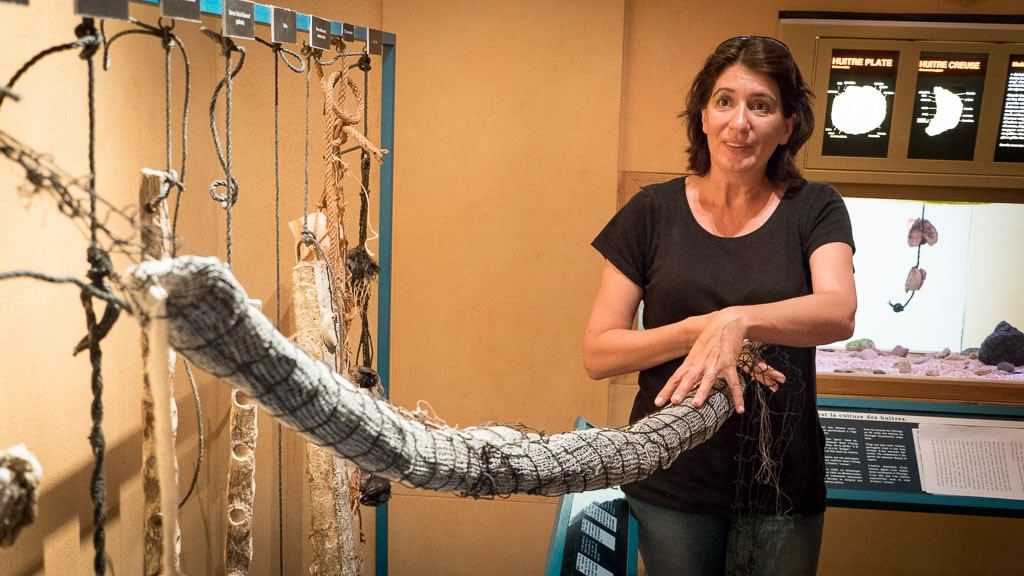 Learning how oysters and mussels are farmed at the museum. © 2015 Ralph Grizzle 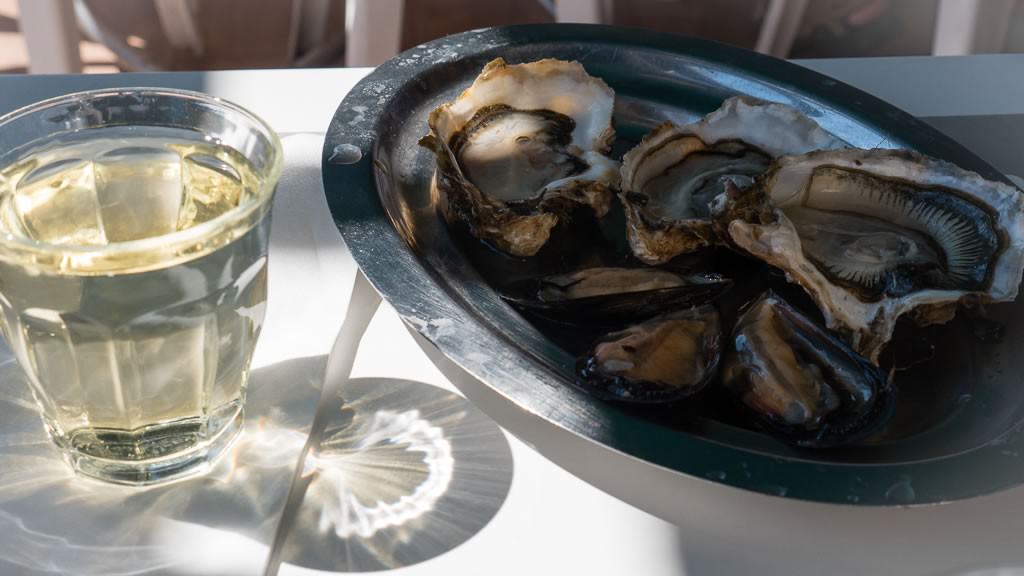 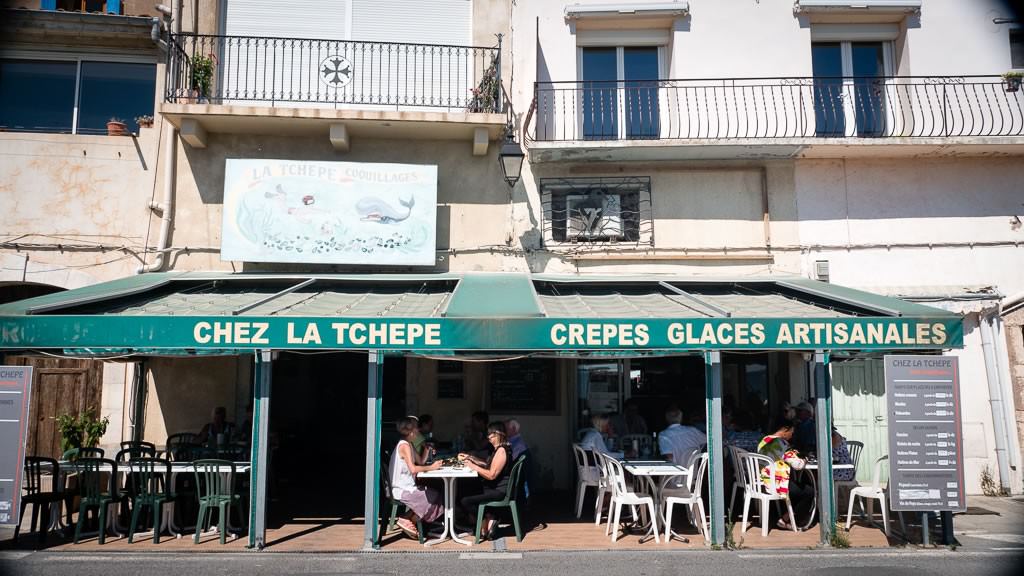 We returned to Anne-Marie for our last night on board and the “Gala” dinner. 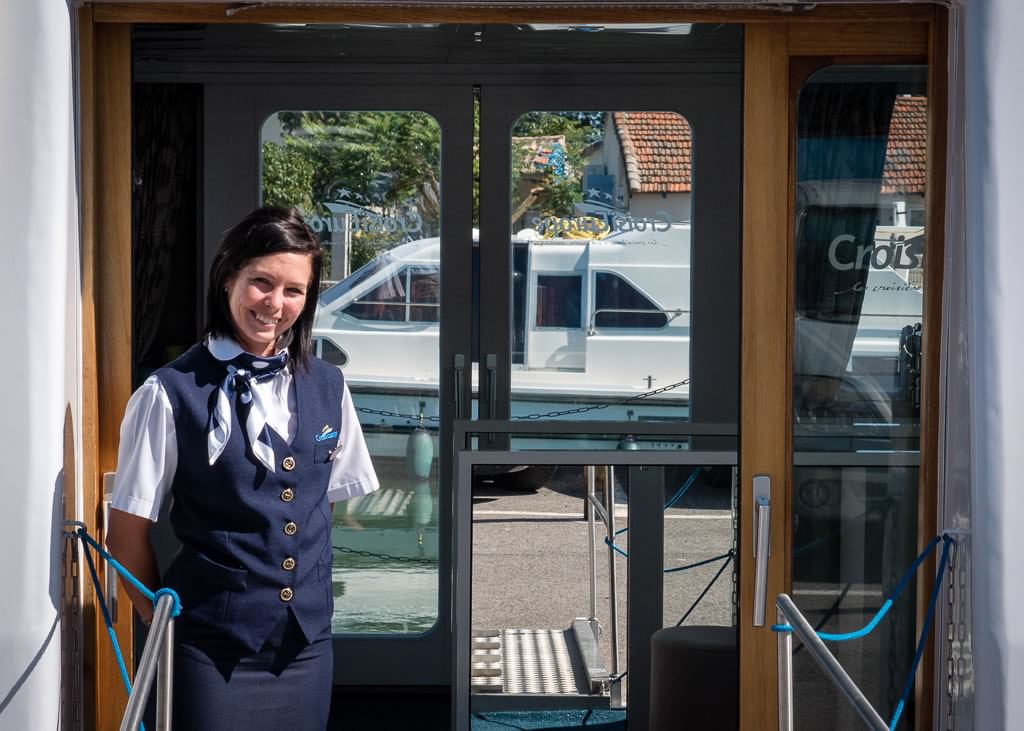 Welcome aboard for our last night on Anne-Marie. © 2015 Ralph Grizzle

The crew bid us farewell. I think they enjoyed the trip almost as much as we did. Ours is not over yet, however. We still have one more full day when we’ll enjoy a cooking class, visit a mansion in Montpelier and overnight in a hotel before heading home. 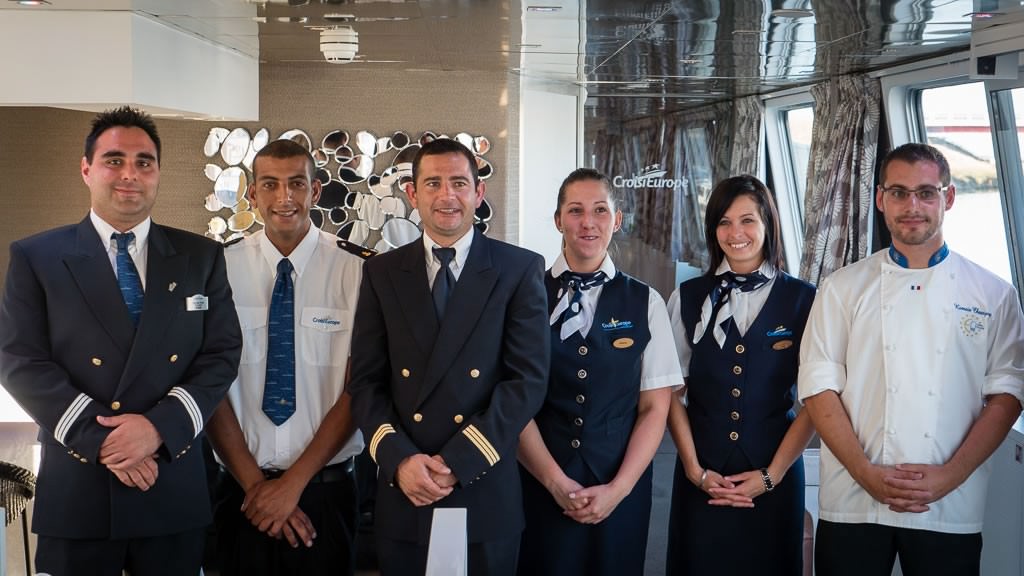 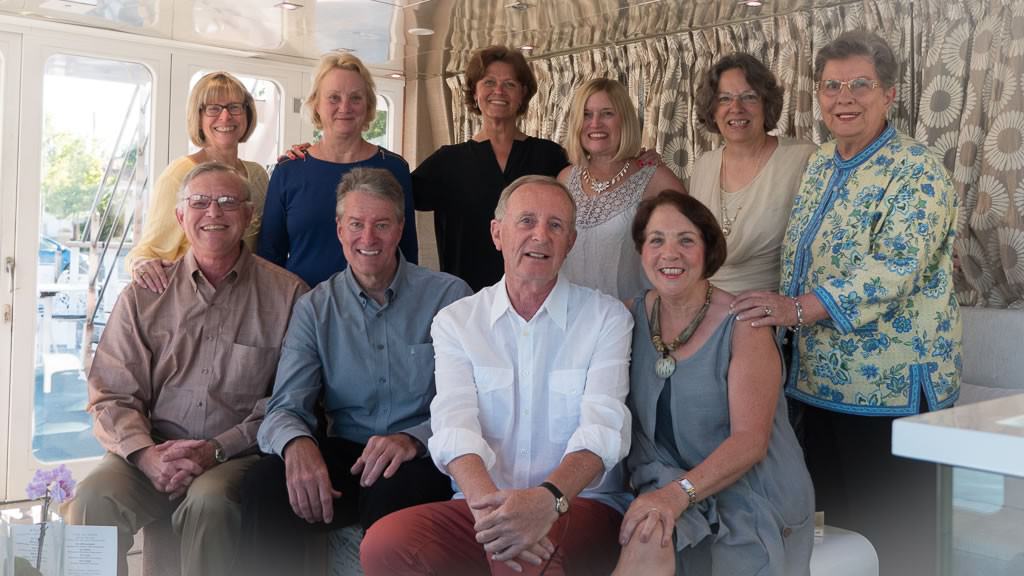 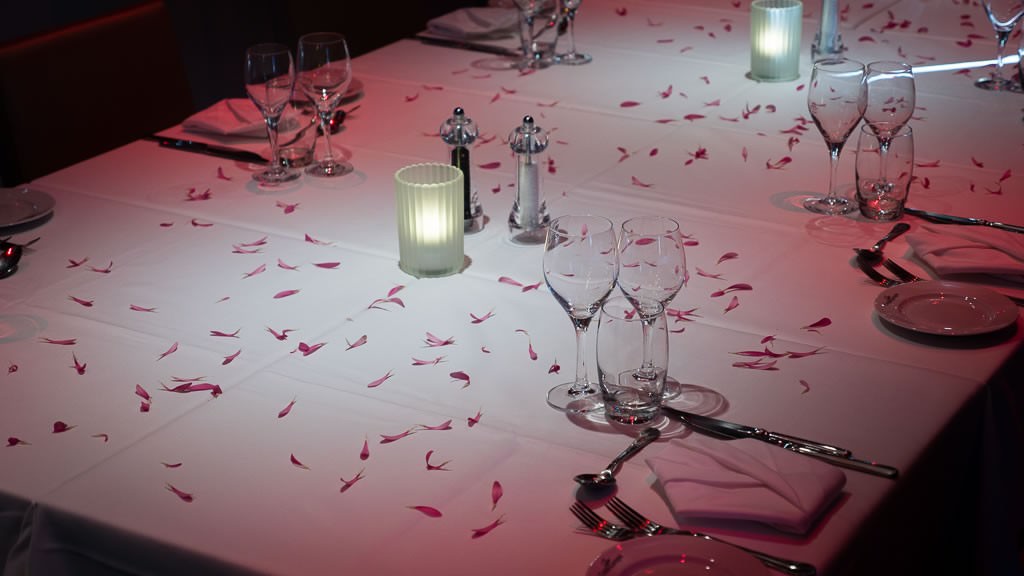 The table set for our gala dinner. © 2015 Ralph Grizzle 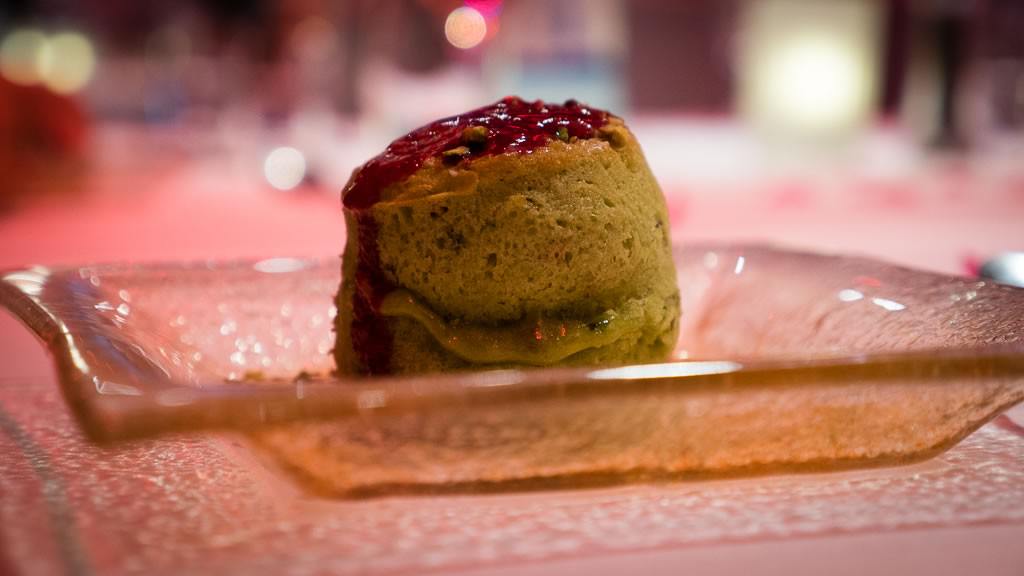 Because one of Seabourn’s vessels needed to docked in Sete, Anne-Marie moved to Frontignan, only about 10 kilometers away from Sete’s city center. After dinner, Monica and I walked into the center of this small village, which appeared to be dead asleep until we turned a corner and discovered karaoke being performed outdoors in the town square.

It was a lovely night, and we took a table for two, joining French families and couples who were enjoying the performance put on by some talented – and not-so-talented – crooners. One more glass of wine? Why not? We were caught up the joie de vivre and loving every minute of our trip here in this beautiful region. I was glad our trip would not be ending when we disembarked the barge. Tomorrow, we will learn something about preparing French food ourselves after one last night on Anne-Marie. As we finished our glasses of wine, a young girl performed “La Vie En Rose,” the signature song of Edith Pilaf that roughly translates to “Life Through Rose-Colored Glasses.” That seemed like an appropriate ending to our day in Sete and our time on CroisiEurope’s Anne-Marie. 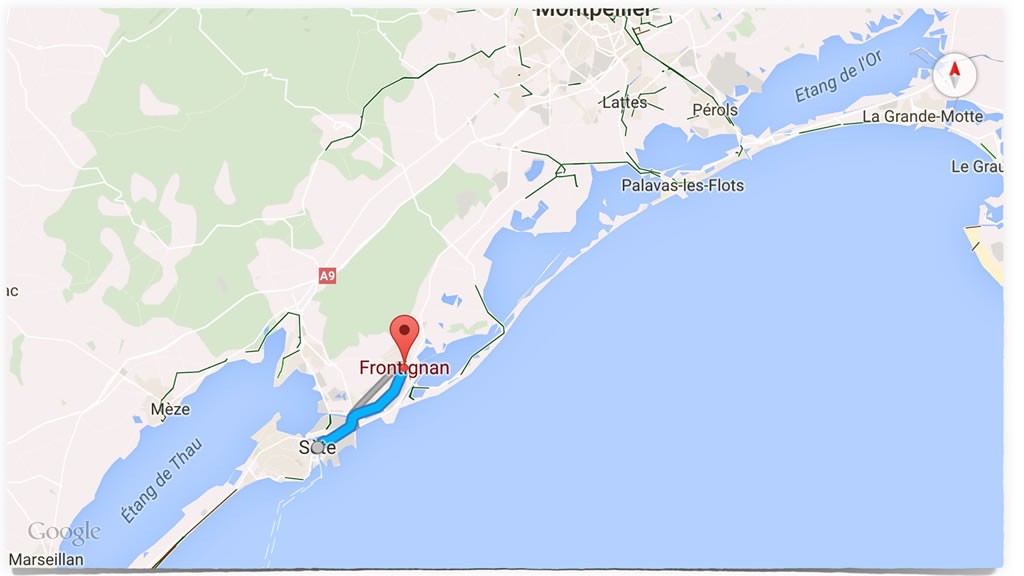 Our barge Anne-Marie moved from Sete to the tiny village of Frontignan, where we disembarked after six wonderful nights on board.