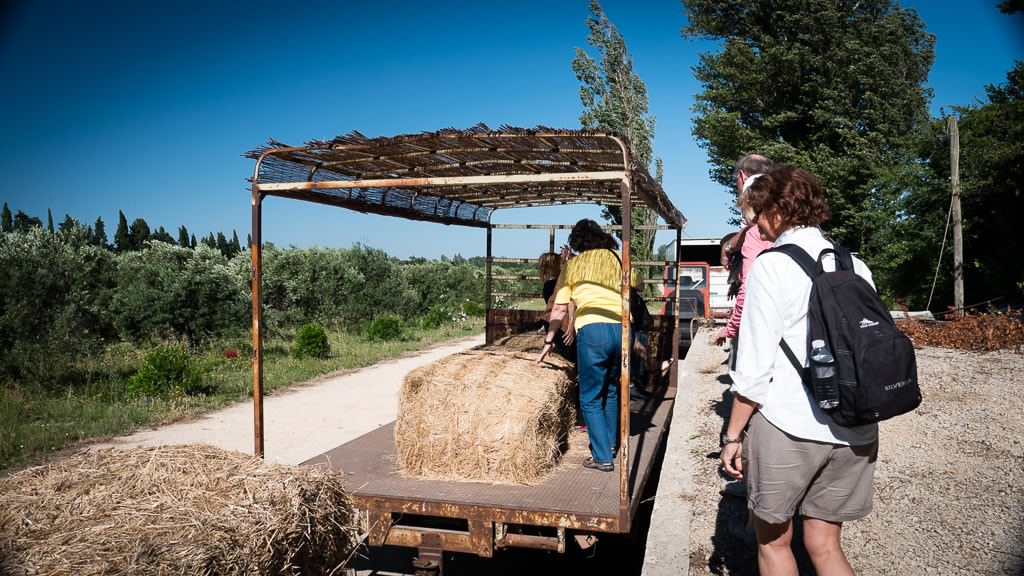 Something new to me: an excursion through olive groves on a tractor. © 2015 Ralph Grizzle

My barge trip from Arles to Sete took place on CroisiEurope’s Anne-Marie June 17 through June 26, with pre- and post-trip overnights and activities. This post picks up on day four of our adventure, June 20, when we explored Arles & cruised to Gallician.

Late yesterday, after a full day tour of Avignon and Chateauneuf du Pape, we boarded Anne-Marie, which was docked in Arles (pronounced Arl). We enjoyed a restful overnight on board, and following breakfast this morning, we headed out to the countryside to learn about olive oil production in Provence and to taste some of the local products. 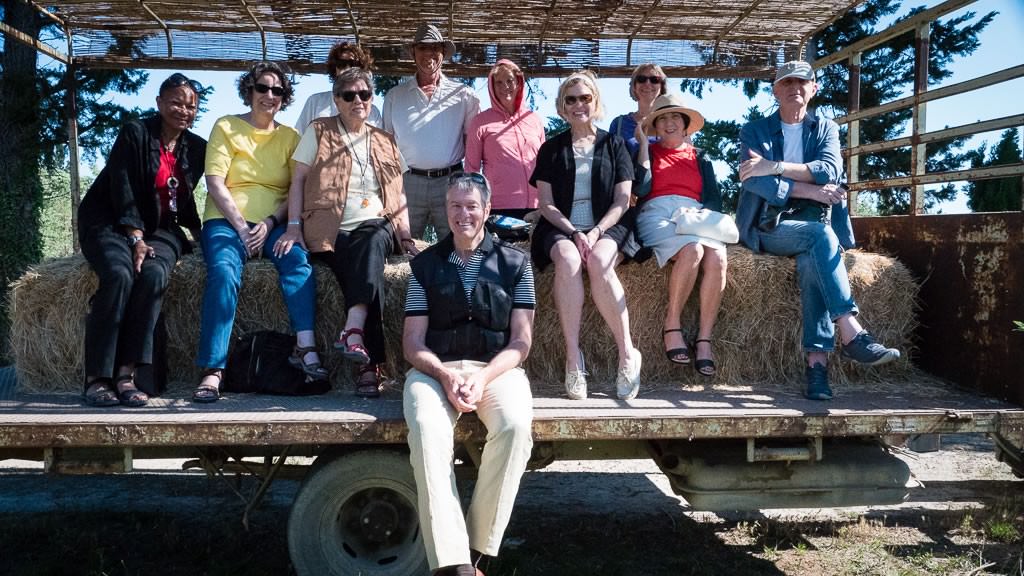 Our group enjoys a morning on the farm. © 2015 Ralph Grizzle

The highlight of the morning tour was our transport once we got to the farm. We stepped on board a trailer pulled by a tractor and sat on bales of hay for a 15-minute or so ride through olive groves. Through our guide Peggy, we learned that the olive groves benefited from the mistral, the strong northwesterly wind that blows through the Rhône valley. The mistral keeps insects from damaging the olives. Indeed, the wind had been exceptionally strong last night in Arles, and thankfully, had settled some today. 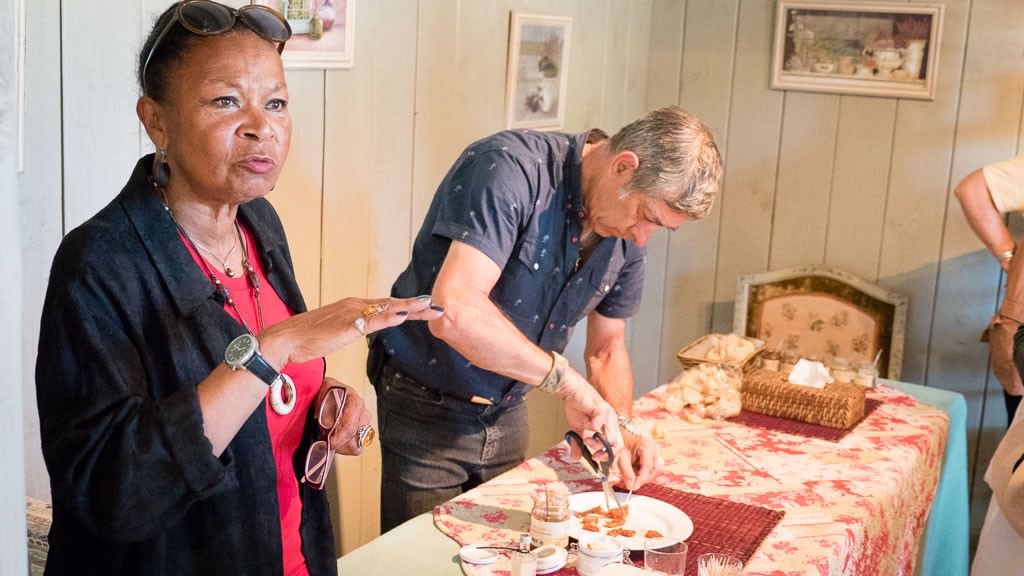 With time left before lunch, Peggy took us back to Arles for a tour of the city before lunch. She told us that Arles was once part of the Roman Empire, and today, its remaining Roman monuments are recognized as a UNESCO World Heritage Site. I checked the UNESCO reference, which says that Arles  is a good example of the adaptation of an ancient city to medieval European civilization. Indeed, Arles has impressive Roman monuments, of which the earliest – the arena, the Roman theatre and the cryptoporticus (subterranean galleries) – date back to the 1st century B.C.

During the 4th century, Arles experienced a second golden age, as attested by the baths of Constantine and the necropolis of Alyscamps. Then the city experienced another resurgence when in the 11th and 12th centuries, Arles once again became one of the most attractive cities in the Mediterranean. 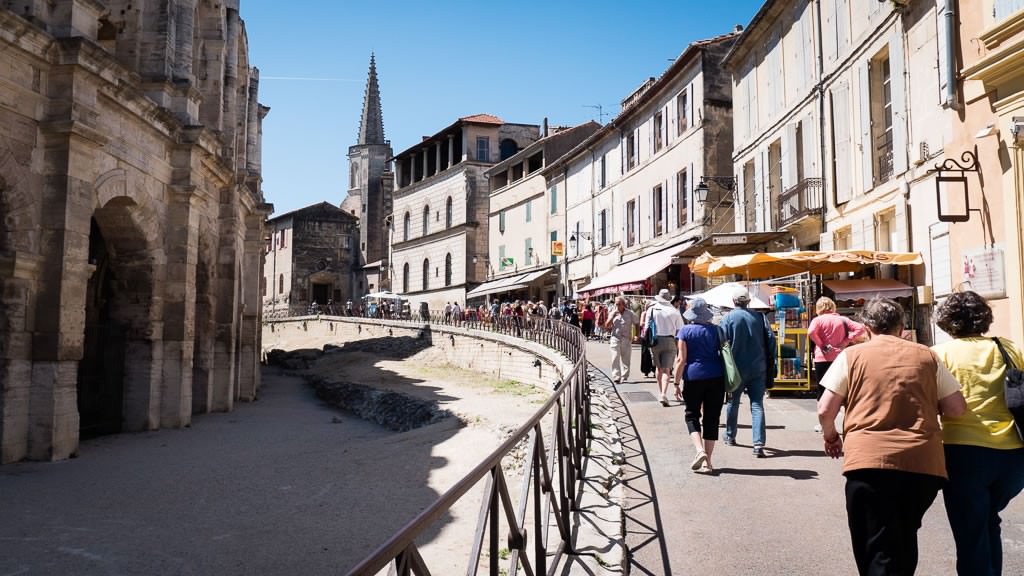 Arles was also home to the famous impressionist painter Vincent Van Gogh from 1888 to 1889. During his stay here, he managed to paint more than 300 works before his increasingly unstable mental health resulted in the infamous “ear incident” in December 1888. Peggy told us that some people have said that his friend, the artist Paul Gaugin, cut Van Gogh’s ear and to spare the former embarrassment, Van Gogh was said to have claimed to have done it himself. But as noted in yesterday’s story Van Gogh almost certainly performed the act himself as indicated by the fact that he later checked himself into an asylum nearby. 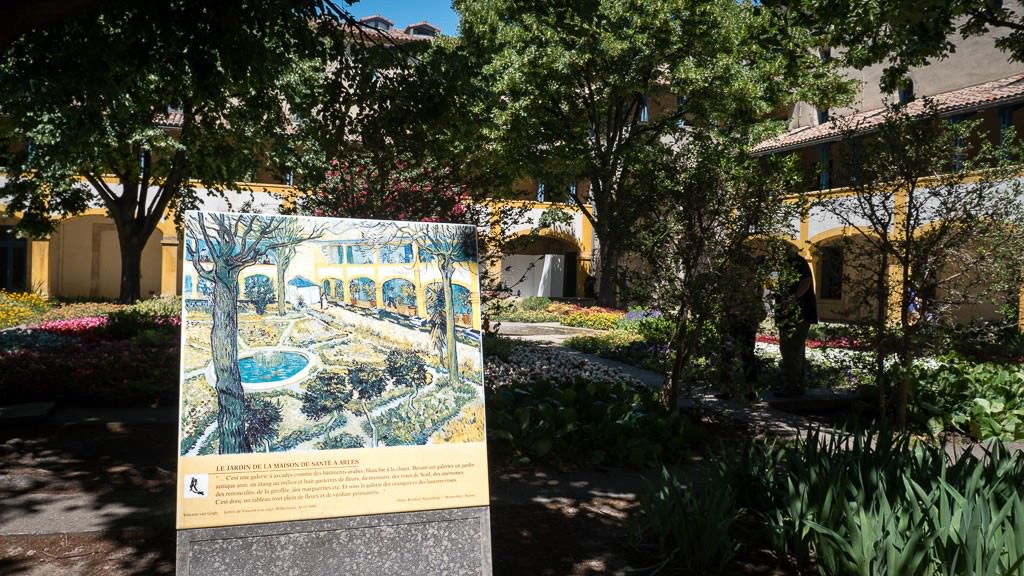 Unfortunately, there are no Van Gogh paintings in the museums in Arles, but we visited one of the sites that inspired the artist’s works, Le Jardin de La Maison de Sante a Arles. We snapped a few photos and admired the beautiful garden. Peggy told us that Van Gogh’s Yellow House, where he lived and which he painted, is gone. The building was severely damaged in a bombing raid by the Allies on June 25, 1944, and demolished. Van Gogh’s works from this period are richly draped in yellow, because, our guide Peggy told us, yellow was the cheapest of paints. Still, there can be little doubt that Van Gogh was enchanted by the local landscape and light. 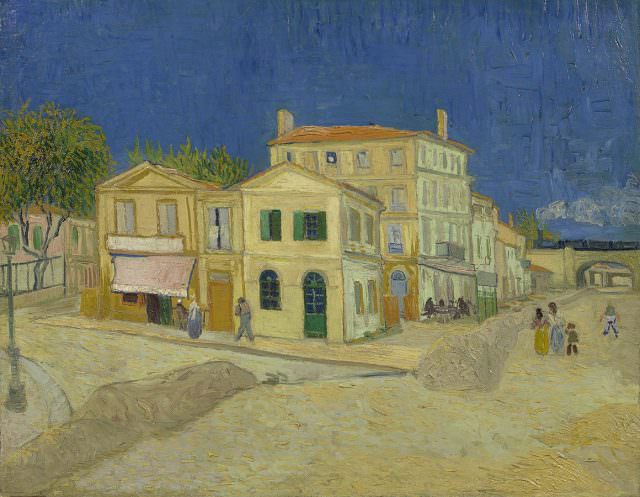 At the arena, Peggy told us about the highly controversial bullfights that take place in Arles every year. She said that Arles practices both Provençal, and Spanish bullfighting. In the camarguaises (bull fights in which the bull is not killed), a team of men attempt to remove a tassel from the bull without injury. On Easter and the first weekend in September, however, Spanish-style bull fights are held here, where the bull is killed at the end. 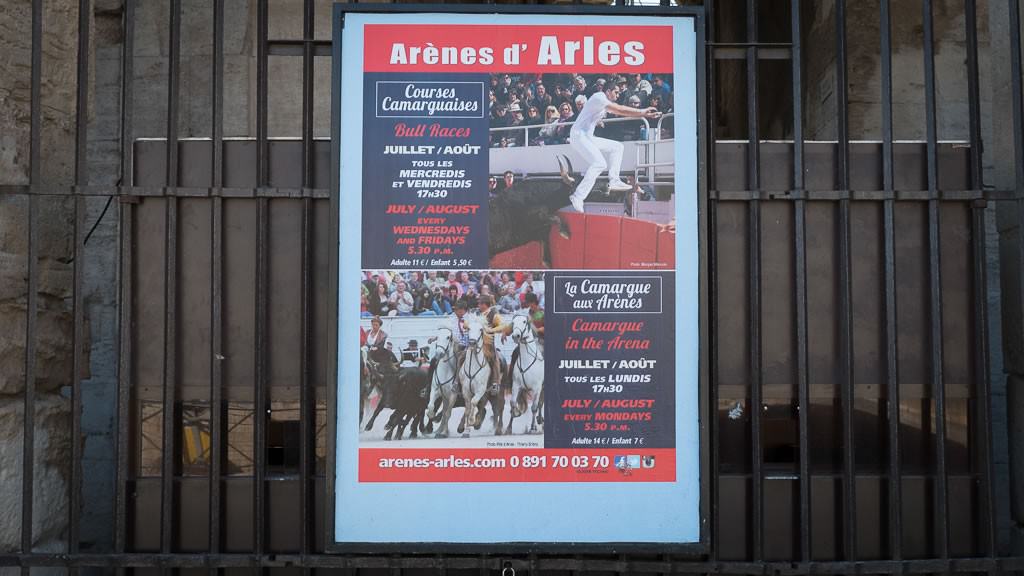 Arles practices both Provençal, and Spanish bullfighting, with the difference being that the bull is killed in the Spanish-style event. © 2015 Ralph Grizzle 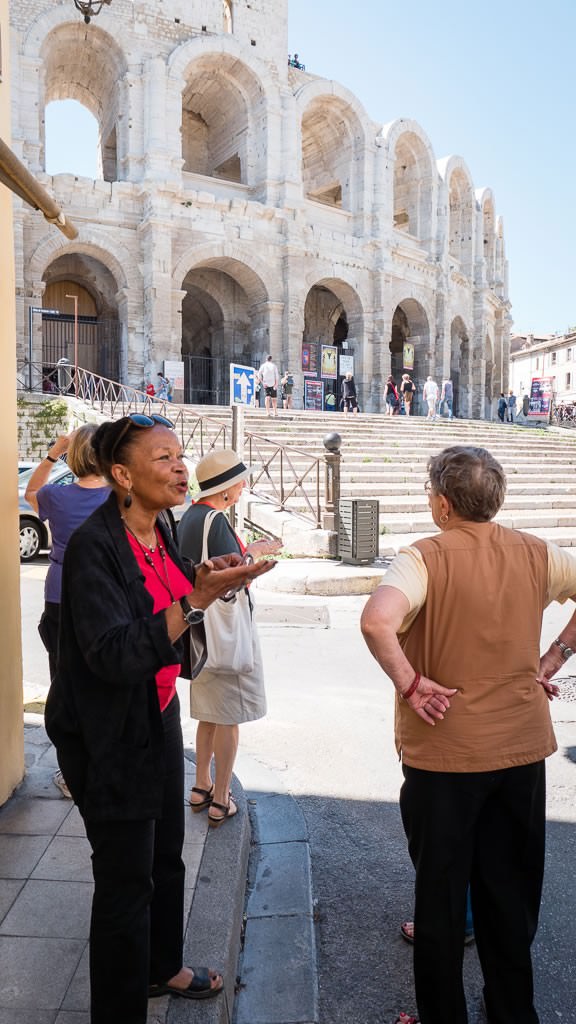 Our guide Peggy tells us about  camarguaises – bull fights in which the bull is not killed; a team of men attempt to remove a tassel from the bull without injury. On Easter and the first weekend in September, Spanish-style bull fights are held here, where the bull is killed at the end. © 2015 Ralph Grizzle

We enjoyed our short tour in Arles. Though small, Arles has an interesting history, beautiful sights and a rich cultural heritage that intrigued us. It was a good place to begin a cruise along the Rhône à Sète Canal, and that is exactly what we were about to begin next.

Part of the beauty of this French city can be found simply by strolling its narrow streets, visiting its shops and sampling its delectable cuisine. Walking is one of the best ways to enjoy your time in this pedestrian-friendly city. © 2015 Ralph Grizzle

We returned to Anne-Marie, where we sat down for lunch as we started cruising toward Gallician. It is difficult to imagine a better moment. We had enjoyed a morning of touring, learned a few things about Arles and about olive oil (as well as about Van Gogh and bullfighting), then sat down for a beautiful lunch, with complimentary French wines, and now, here we were, motoring away from Arles on a sunny afternoon. Life could not have been better. 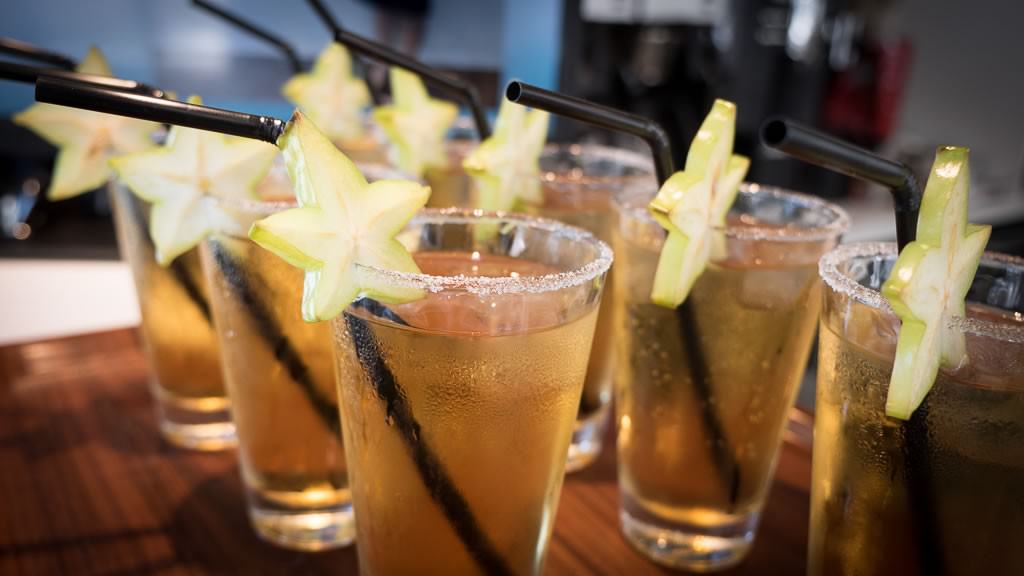 Welcome drinks when we returned to Anne-Marie. © 2015 Ralph Grizzle

Certainly, there is a magic in motion, particularly on water. The afternoon was relaxed (read napping). We arrived in Gallician in the late afternoon. It was a small, small town. Some from our group walked in to explore the few houses and buildings that made up the town center. Monica and I pedaled bicycles, available at no charge on the barge. The crew brought the bikes down to the gangway for us and adjusted them to fit us. With the seat raised all the way, my bike did fit my 6’5″ frame. 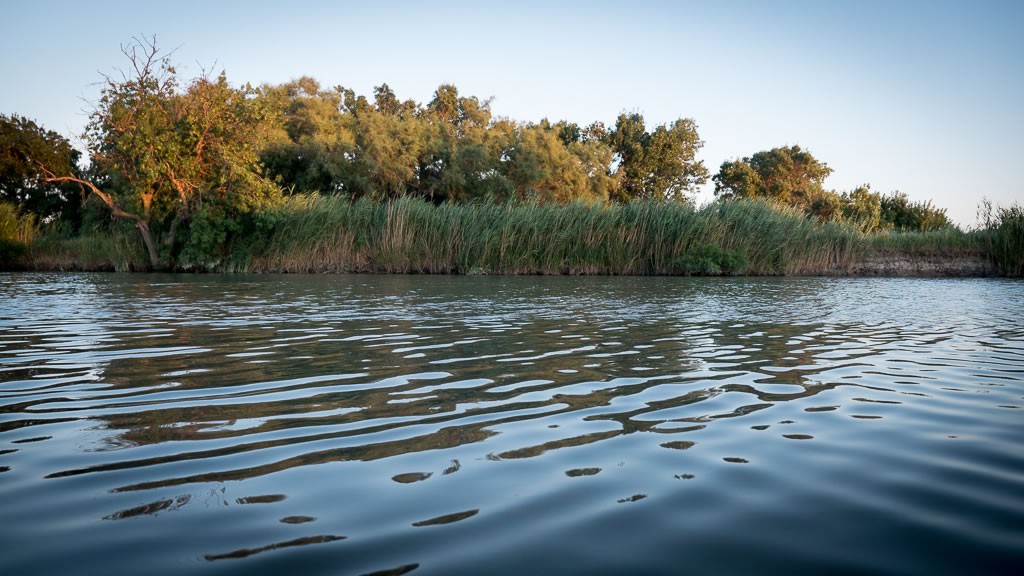 The view from our stateroom window in Gallician. © 2015 Ralph Grizzle

The pedaling along the canal was easy and enjoyable. And of course, it was gorgeous. We passed fishermen along the banks of the canal and, in broad expanses of pastures, the grazing “wild” horses that are common to this region. With the breeze at our backs and the sun in our faces, we were pedaling through moments that we would never forget. 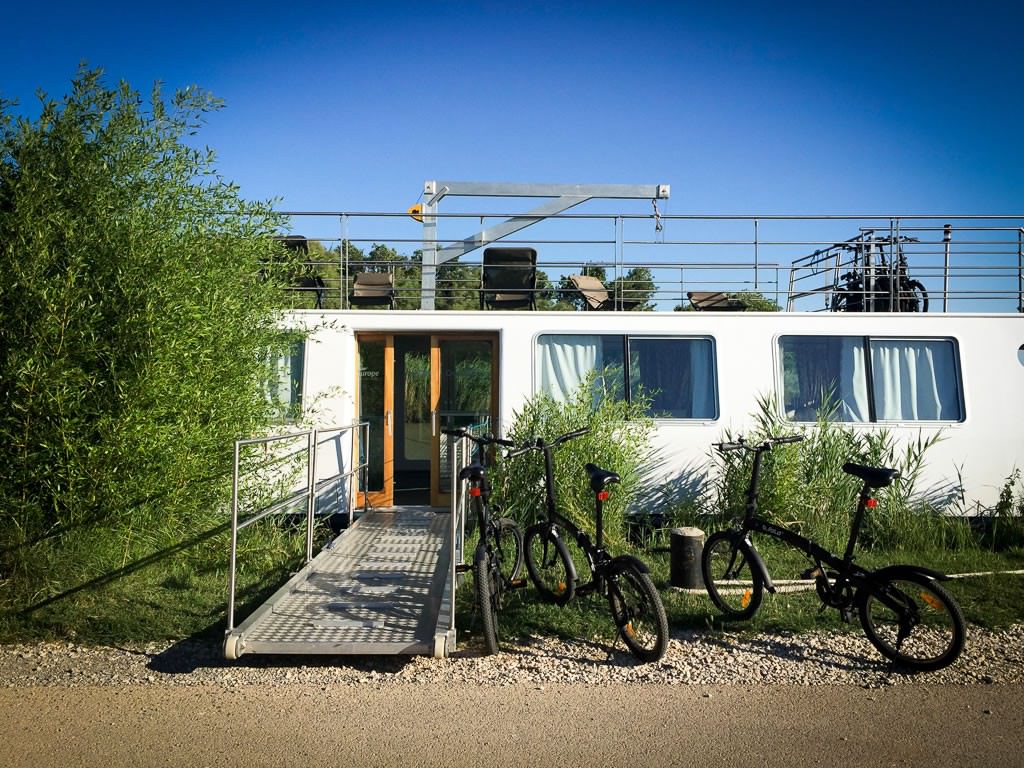 Anne-Marie docked alongside the canal, with our bikes parked for the rest of the day. © 2015 Ralph Grizzle

We returned to Anne-Marie, having ridden for 45 minutes or so. A glass of champagne was never beyond our arm’s reach, so why not celebrate the moment before getting washed up before dinner? Like last night, dinner was exceptional, with those beautiful French wines and cheeses complementing the cuisine. 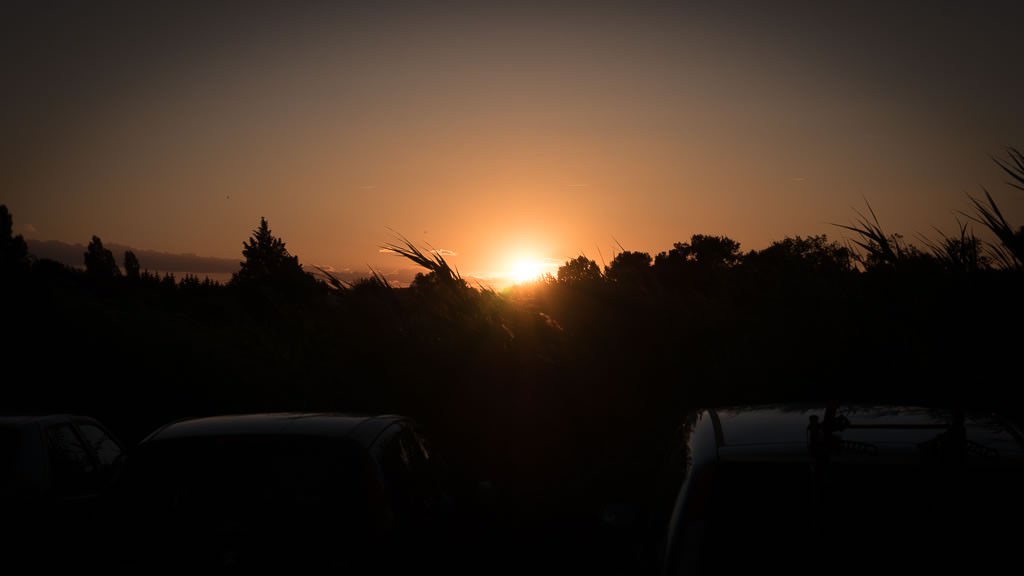 As sunset approached, late at this time of year, I stepped out on the top deck to admire the beauty of the region. It seemed that we were the only ones on earth, here in our little Anne-Marie, tied up alongside the banks in this small place. I could hear the song of the cicadas. At the risk of repeating myself, this too was a moment to remember. 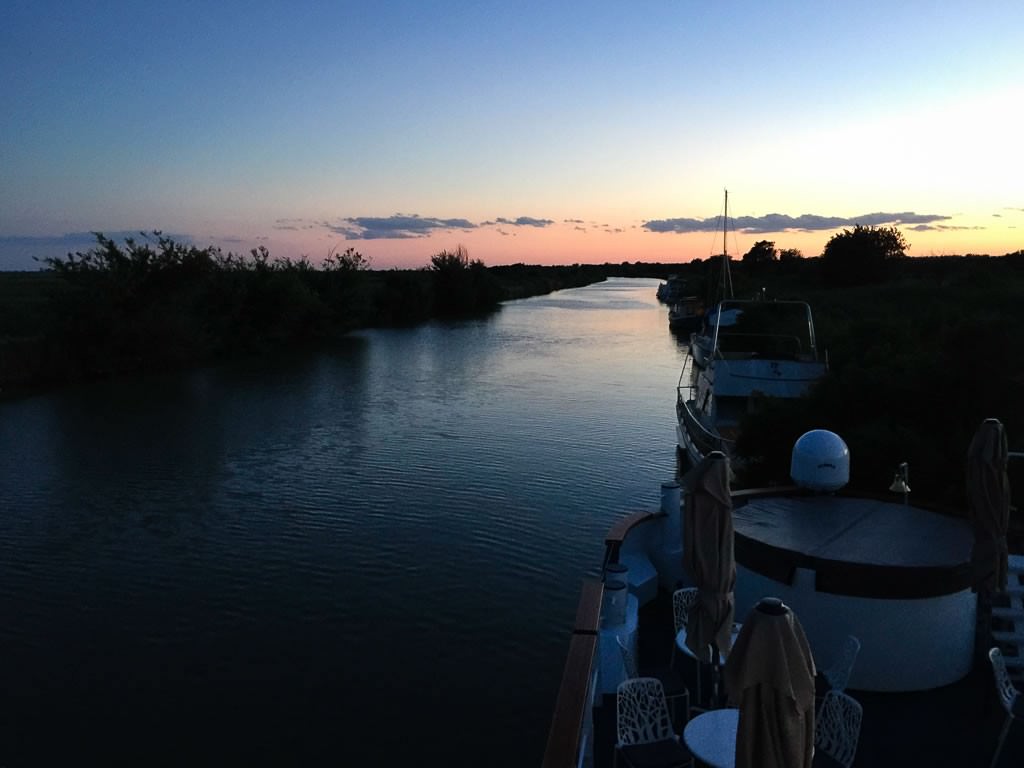 Tomorrow, we continue along the canal toward Aigues-Mortes. © 2015 Ralph Grizzle

Tomorrow, after a tour to nearby Sainte-Marie-la-Mer, we would continue along the canal to reach Aigues-Mortes, a stunning fortified city with a large salt factory just steps outside the town walls. Tonight, we need only enjoy the sights, smells and sounds of a perfect summer night in this beautiful region in the south of France. 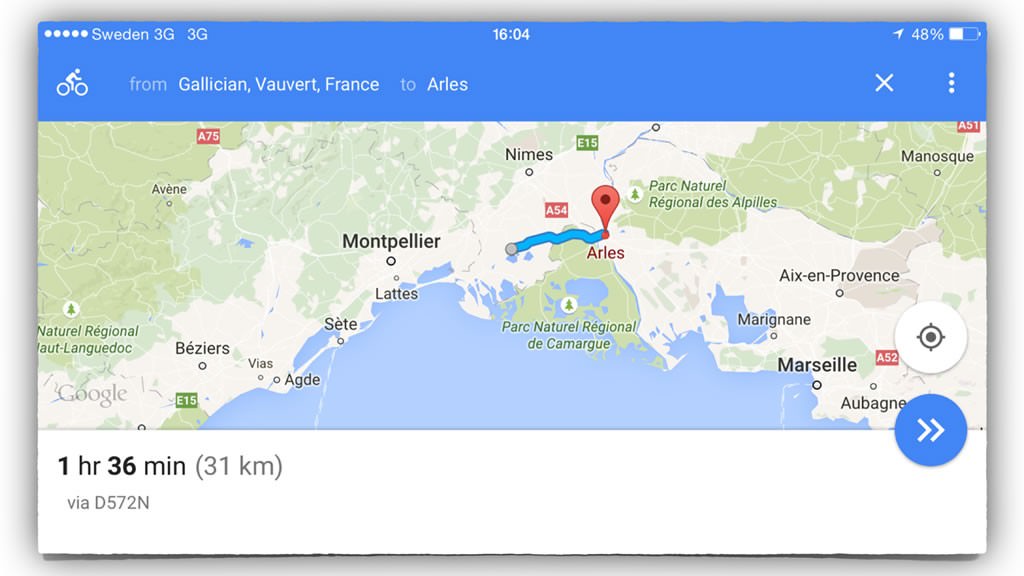 The barge doesn’t cover great distances, only 31 kilometers, but oh is it relaxing.