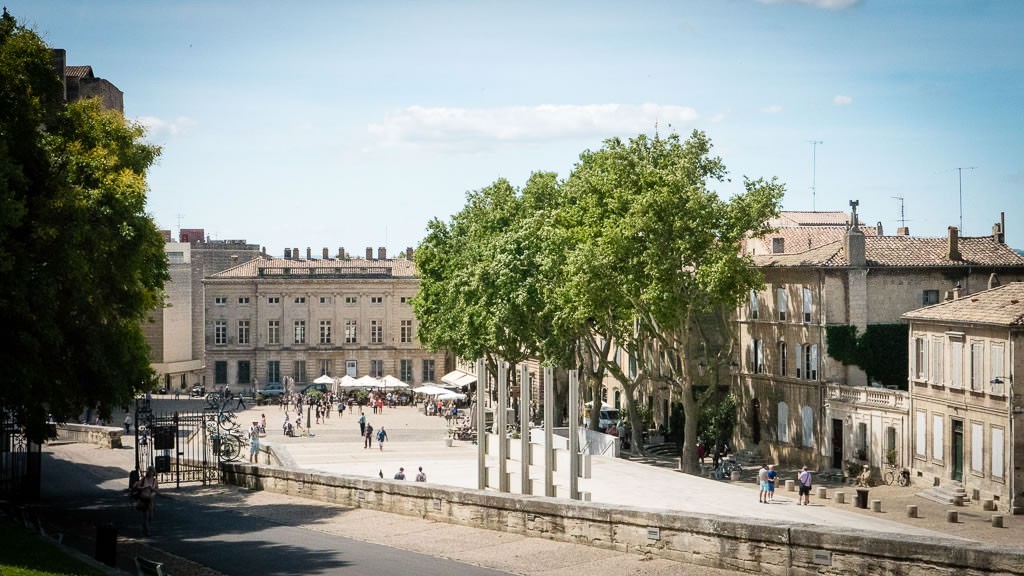 In Avignon, the view from the Pope’s Palace. © 2015 Ralph Grizzle

My barge trip from Arles to Sete took place on CroisiEurope’s Anne-Marie June 17 through June 26, with pre- and post-trip overnights and activities. This post picks up on day three of our adventure, June 19, when we explored Avignon & Châteauneuf-du-Pape before boarding Anne-Marie in Arles.

Following yesterday’s surprise trip to Uzes, we set out this morning for a full day of exploring Avignon & Châteauneuf-du-Pape. We were to have visited Pont du Gard, but we managed to do that yesterday as well. In hindsight, it may have been too much to do Avignon and Châteauneuf-du-Pape and Pont du Gard in one day, so today the pace was more relaxed than it might have been otherwise. With an adventure ahead of us, we stepped aboard our two vans and headed, with our guide Catherine, to Avignon.

A UNESCO World Heritage Site, Avignon’s medieval walled city has a fascinating story to tell, from its impressive Pope’s Palace that was once the seat of Catholicism to a bridge that has captured the imagination of millions of people over the ages.

The city is situated on the Rhône river. Spanning the river (well, almost) is the Pont d’Avignon, the bridge that inspired the French song, Sur le Pont d’Avignon. Part of the UNESCO World Heritage Site, the Pont d’Avignon is one of the world’s most famous bridges. Hundreds, perhaps thousands, of people come to walk on this bridge everyday. The odd thing is, the bridge doesn’t go anywhere. That’s because it was built back in the 1100s, destroyed many times, and what you see now is all that remains of the bridge. 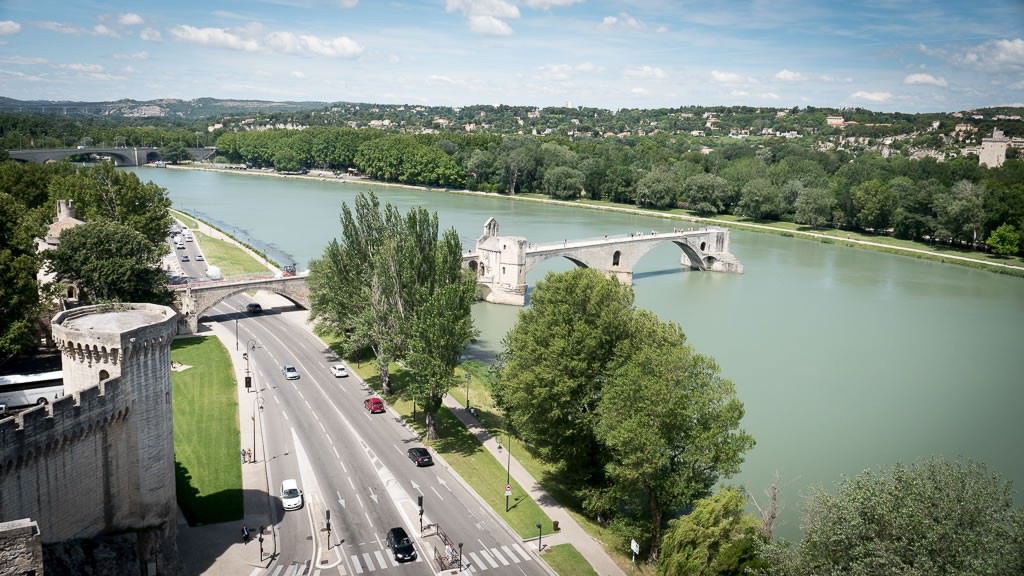 Still, there’s something magical about the ancient bridge, and indeed it has captured the imagination of millions of children throughout the world. In the happy song Sur le Pont d’Avignon various members of French society – ladies, gentlemen, soldiers and musicians – meet on the bridge and do a little dance.

We did not dance on the bridge but admired it from a high vista overlooking the river. 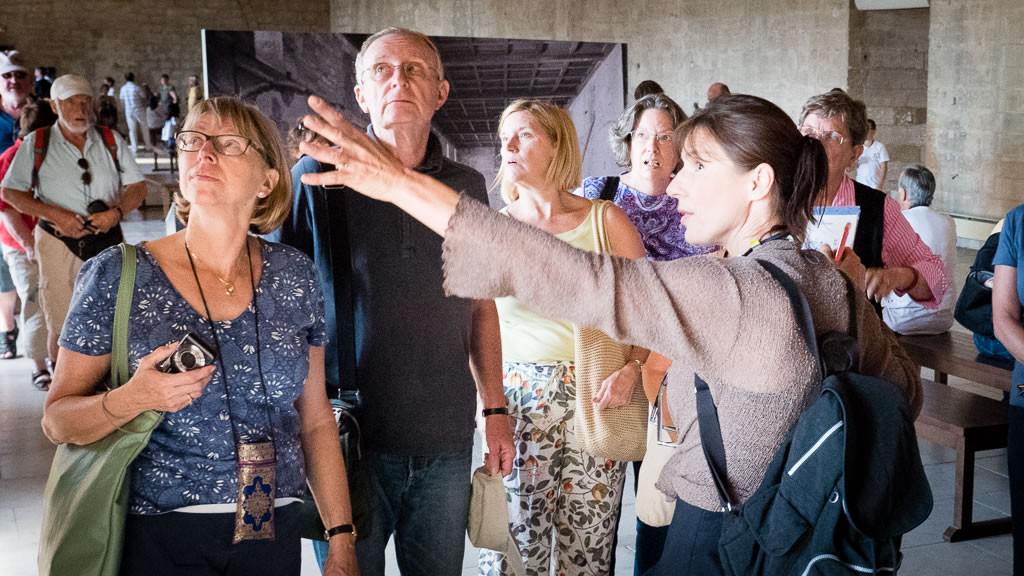 Our guide Catherine taking us for a tour of the Pope’s Palace. © 2015 Ralph Grizzle

We also visited The Pope’s Palace, one of the largest and most important medieval Gothic buildings in all of Europe. It was once a fortress and a palace, and in 1309 became the home to six successive popes. We explored the palace for about 90 minutes. Our tour included a visit to the Grand Chapel, where the Avignon popes worshipped. I found it to be impressive and humbling.

The Pope’s Palace wasn’t the only thing the pope’s left behind in Avignon. They also left behind a legacy of an internationally acclaimed wine, and no trip to Avignon would be complete without a taste, or two, of Chateauneuf du Pape, or basically, the Pope’s wine. For that, we headed to Chateauneuf du Pape for lunch and a wine tasting. 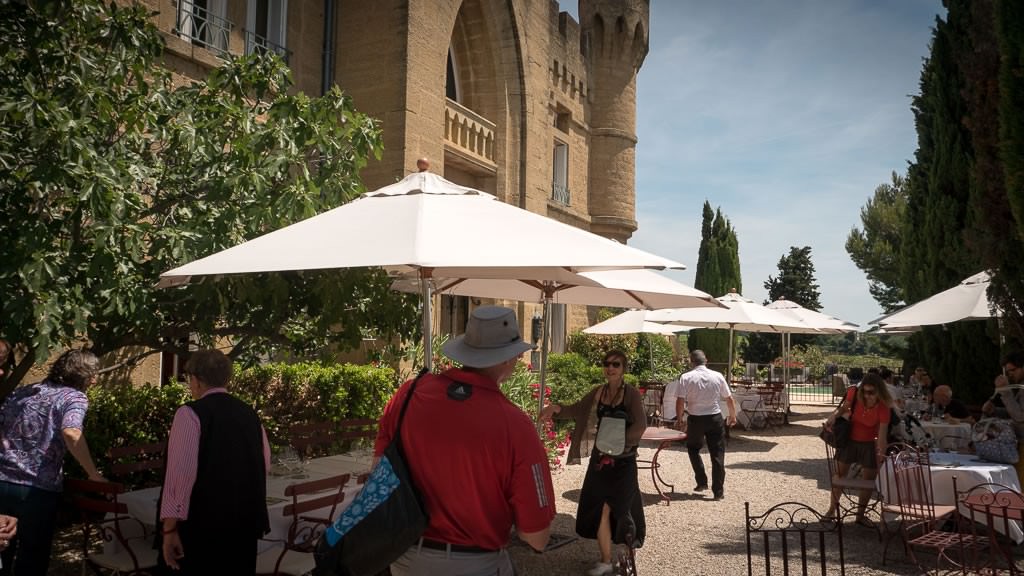 Our lunch venue was outstanding, on the grounds of an impressive palace overlooking the vineyards of Chateauneuf du Pape. At La Table des Fines Roches, we dined on a terrace punctuated by cypress trees. It was a gorgeous setting on a gorgeous day. The lunch was one of those that went down in the books as “must return here one day.” 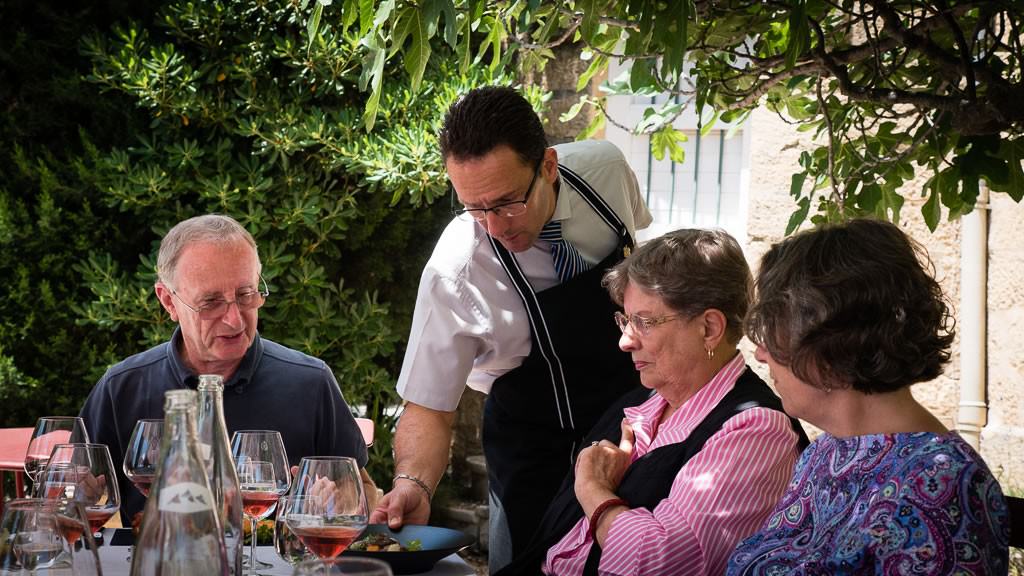 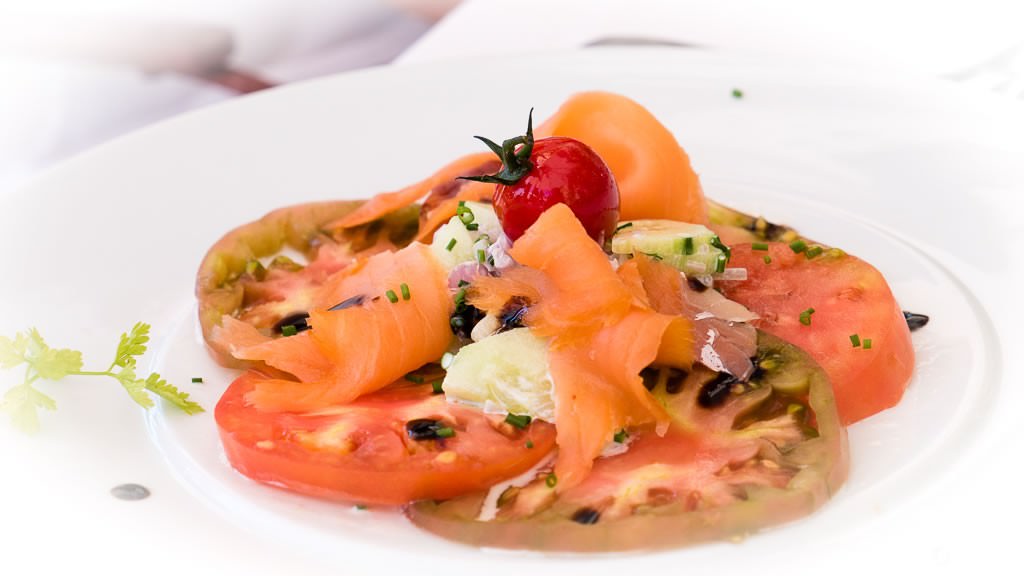 After lunch the group headed with our guide Catherine into Chateauneuf du Pape for a wine-tasting. Monica and I headed back to Arles to prepare our group’s welcome aboard Anne-Marie. 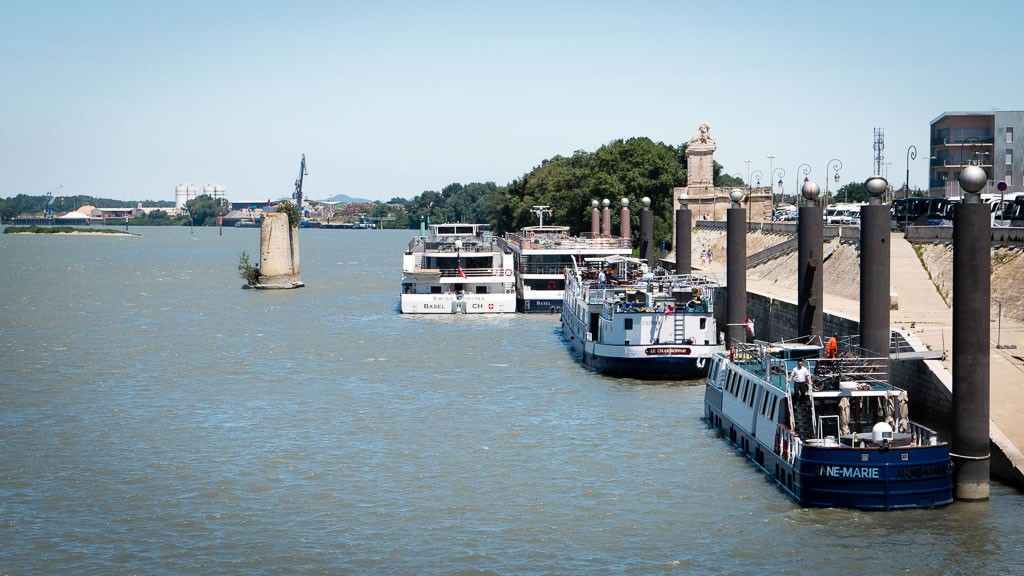 Our tiny, yet elegant, Anne-Marie was docked at Quai Max Dormoy in Arles. We were told that Van Gogh, who lived in Arles from 1888-1889, painted his masterpiece, The Starry Night, near the dock. As it turns out, that’s not true. The painting depicts the view from his asylum room at Saint-Rémy-de-Provence. Following a breakdown in 1888 that resulted in the self-mutilation of his left ear, Van Gogh had voluntarily admitted himself to the Saint-Paul-de-Mausole lunatic asylum.

Nonetheless, Van Gogh probably did walk along the docks here in Arles, and I couldn’t help but hum the tune of Don McLean’s “Vincent” as we boarded Anne-Marie.

Our group returned from the wine tasting in Chateauneuf du Pape, giving the tasting, and the wines, high marks. One from our group bought a case of wine and had it shipped back to the U.S.

The entire crew welcomed our group on board. We enjoyed a champagne toast and a orientation talk. Hailing from Hungary, the ever-affable Cruise Director Zoltan gave us a briefing about what to expect during our week. 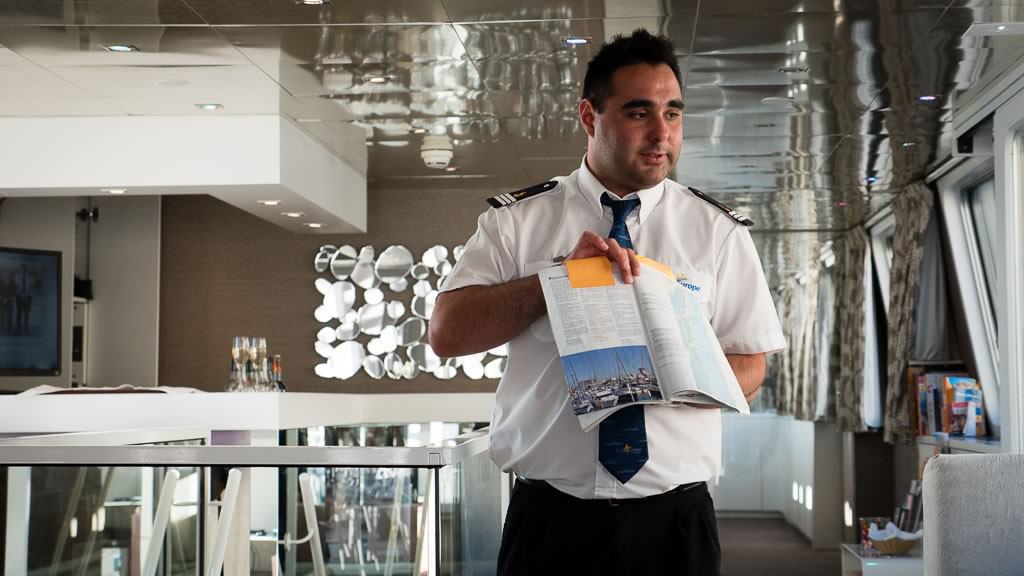 From Hungary, Cruise Director Zoltan welcoming us aboard and explaining some of what we would see in the coming days. © 2015 Ralph Grizzle

Anne-Marie is one of four new barges that Strasbourg-based CroisiEurope has put into operation. Two more barges are coming next year. CroisiEurope’s barges are custom-built for hotel barging, as opposed to being modified from cargo barges. Anne-Marie featured bicycles, included excursions,  jacuzzis, and complimentary WiFi that actually worked well — and the all-important open bar. 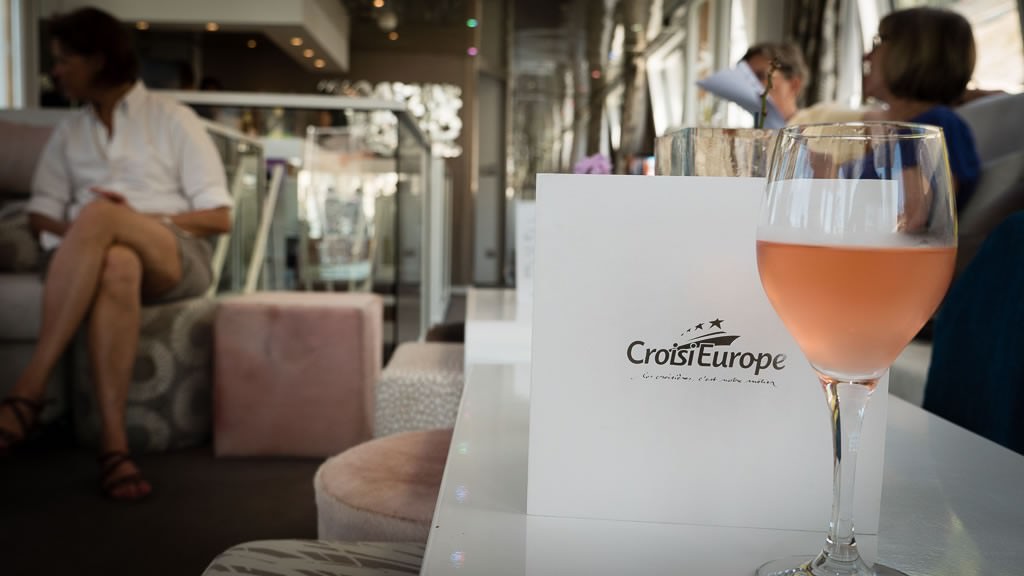 Relaxing in the living room with a glass of complimentary rose wine. © 2015 Ralph Grizzle 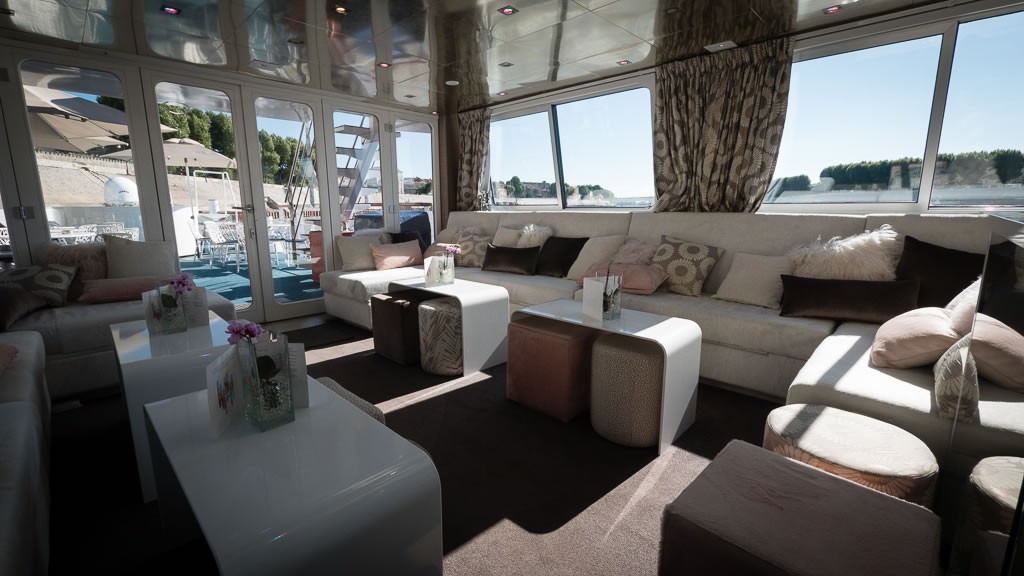 Our living room, with access to the outdoor decks. © 2015 Ralph Grizzle

Our Stateroom on Anne-Marie 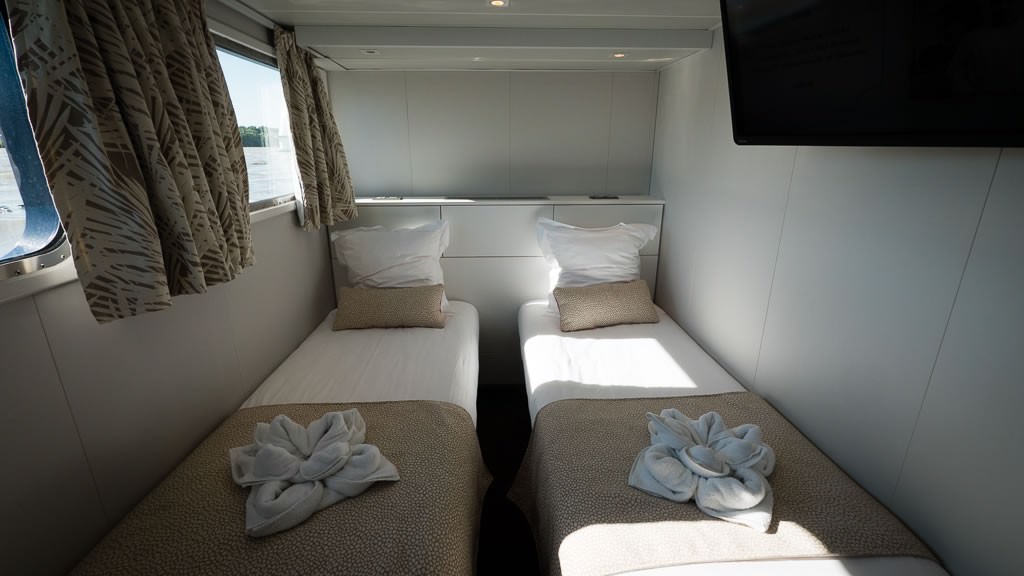 Two beds that could be placed together. © 2015 Ralph Grizzle

I’ll be posting more about Anne-Marie’s facilities as we continue our voyage. Many of you have said you were curious about the staterooms. They are down one deck from the living room and bar, cozy, measuring 110-square-feet, and exceptionally well-configured, with plenty of space for storage. Knowing that the staterooms were small before boarding Anne-Marie, I found that the cabin exceeded my expectations, though it could be crowded when two of us were angling for space while getting ready to go out on excursions or preparing for dinner.

The staterooms featured smartly designed storage in the headboards of the twin-bed configured staterooms, as well as a small closet for hanging clothes and storage of suitcases underneath the beds. I was pleased to see the bathroom had plenty of storage, in a smartly configured drawer beneath the sink, and that the shower was large enough to accommodate all of my 6’5″ body, even with the glass doors closed and elbows extended when washing my hair. 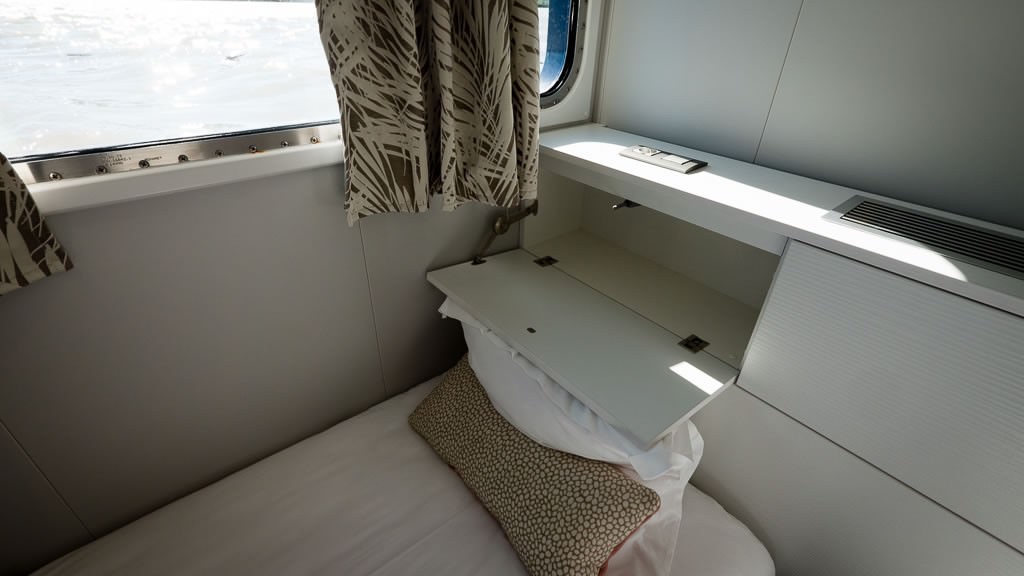 Smart storage at the head of the bed. © 2015 Ralph Grizzle

For the mobility challenged, there is something very close to an ADA-compliant stateroom with a wider door and other features for those who find getting around difficult. The stateroom is the only stateroom on the same level as the living room and dining room. 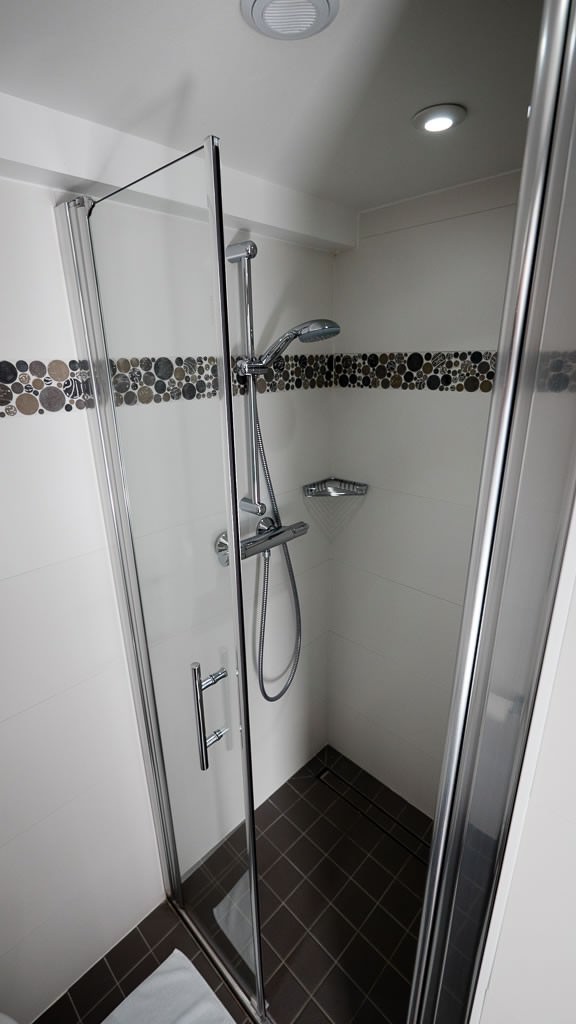 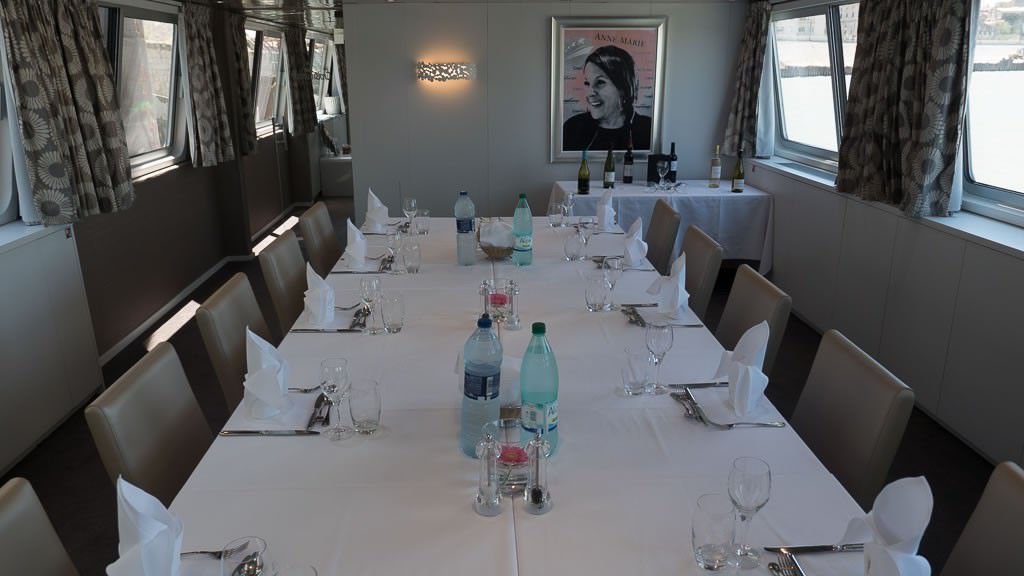 Unpacked and cleaned up, we were ready for dinner. There is a single dining room that will seat up to 24, but as there were only 10 of us, we enjoyed sharing one large table. Dinner was served course-by-course, beginning with an amuse-bouche, followed by a starter, then the main course, then cheese, then dessert — all complemented by complimentary wines from the region, which just so happens to be the largest wine-producing region in France. We enjoyed Côte du Rhône, Provençal Rosé as well as Chablis and Chardonnay, along with other wines on our voyage. 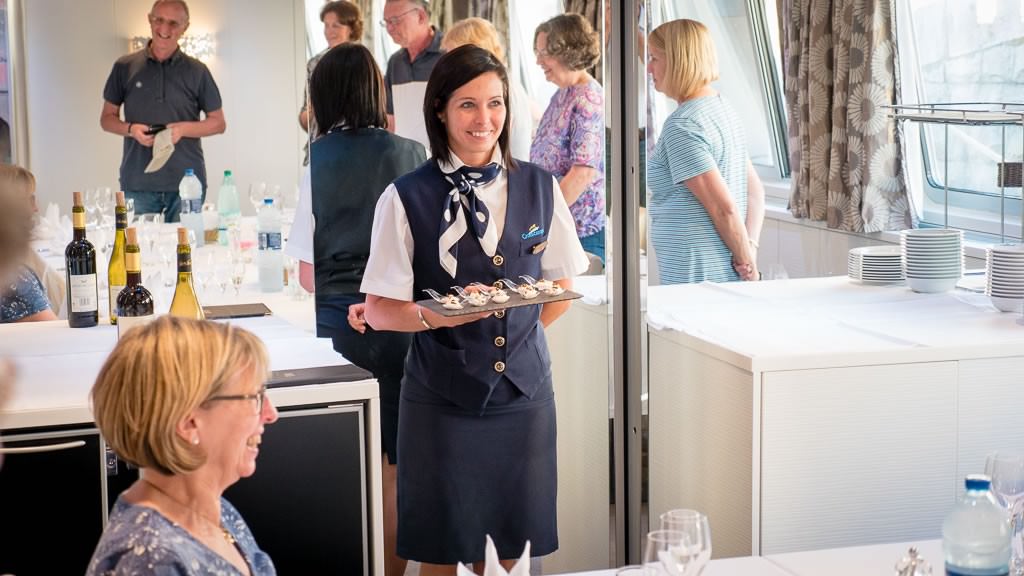 For those with food allergies or food preferences, the galley could be flexible, serving alternative dishes. Bottled water was at our table, both sparkling and still. Specialty coffees and soft drinks, as well as spirits and beer, were all available at no extra charge. 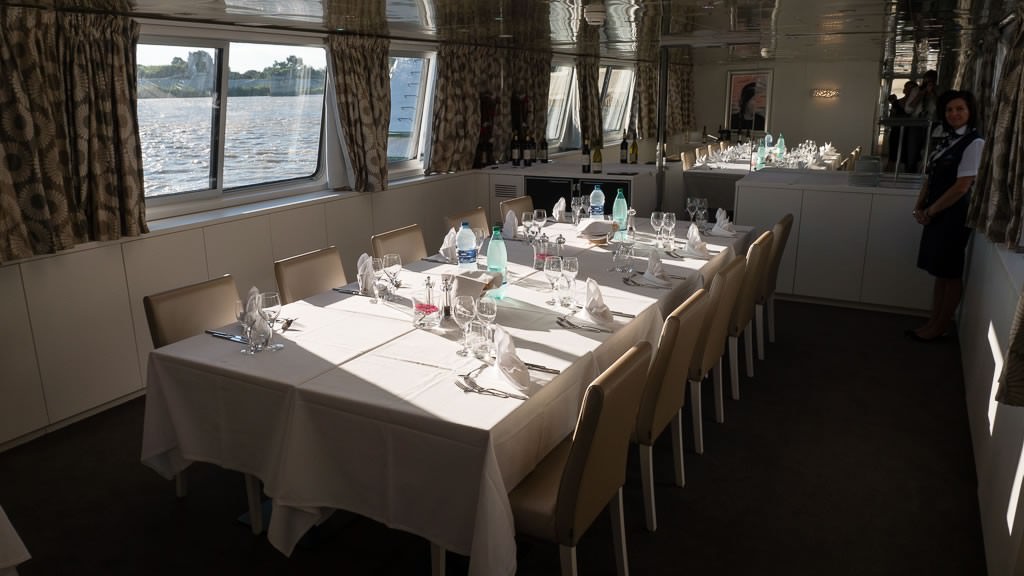 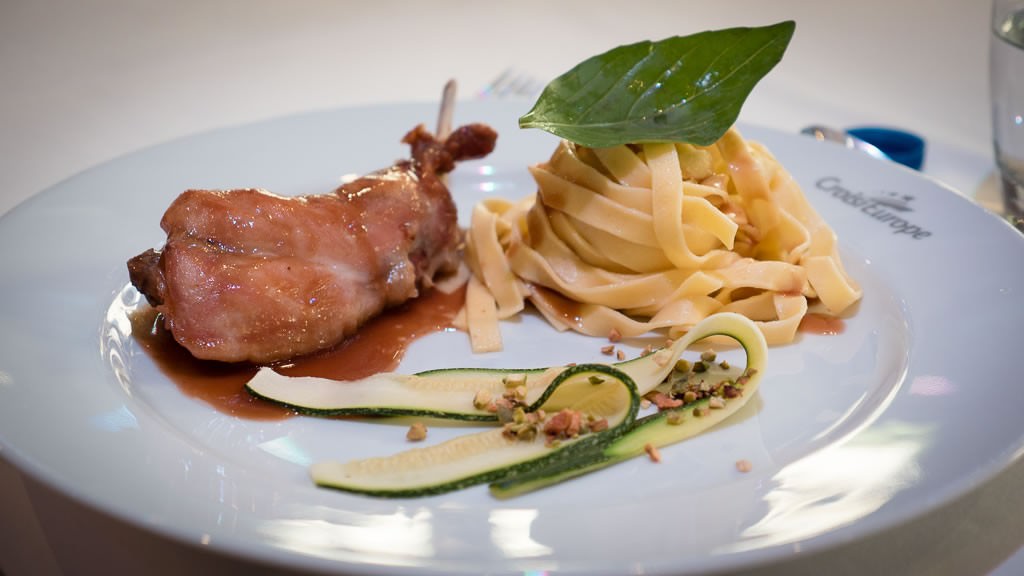 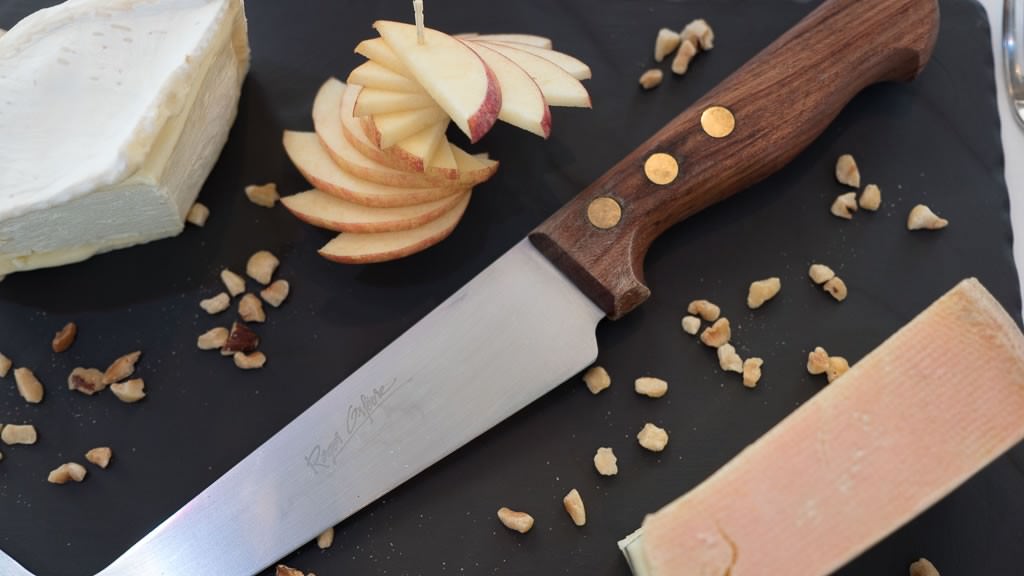 We had two cheeses for lunch and two for dinner. © 2015 Ralph Grizzle 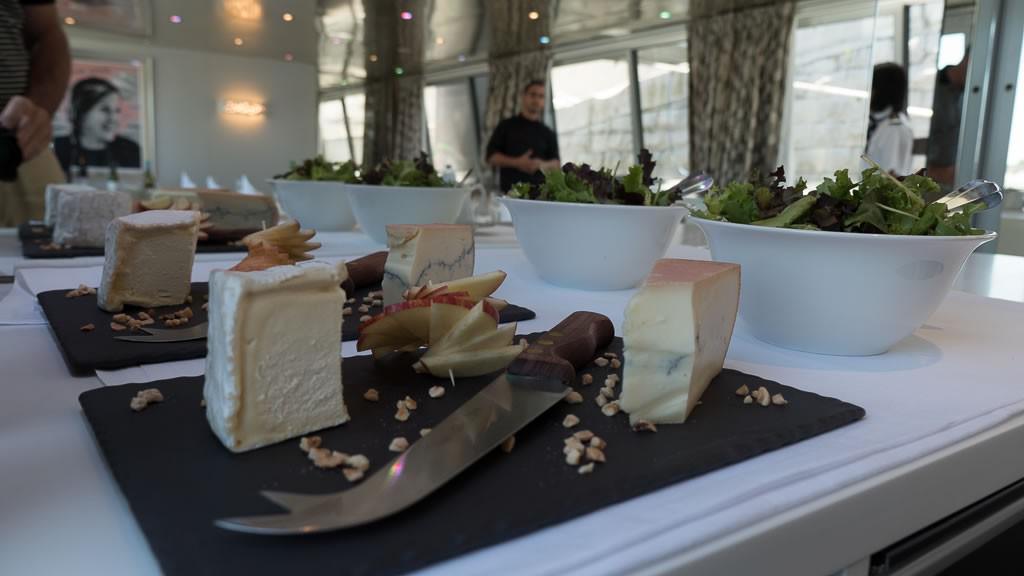 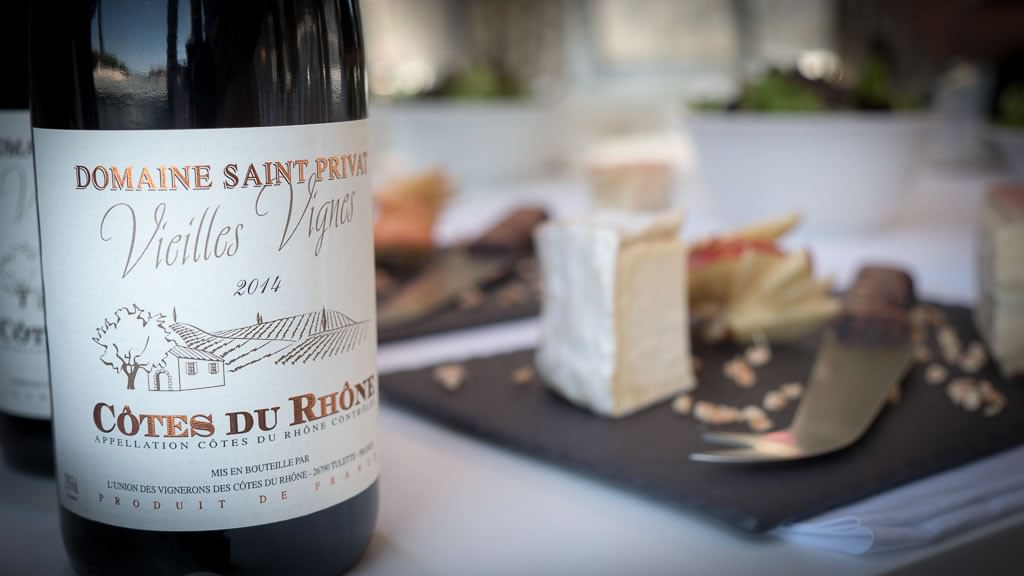 We enjoyed a nice dinner on our first night on board. The night was still light and summer-like, and so we took a stroll through Arles, walking no doubt where Van Gogh had walked before, perhaps contemplating, as we were, the beauty of this region and all that the river ahead promised. 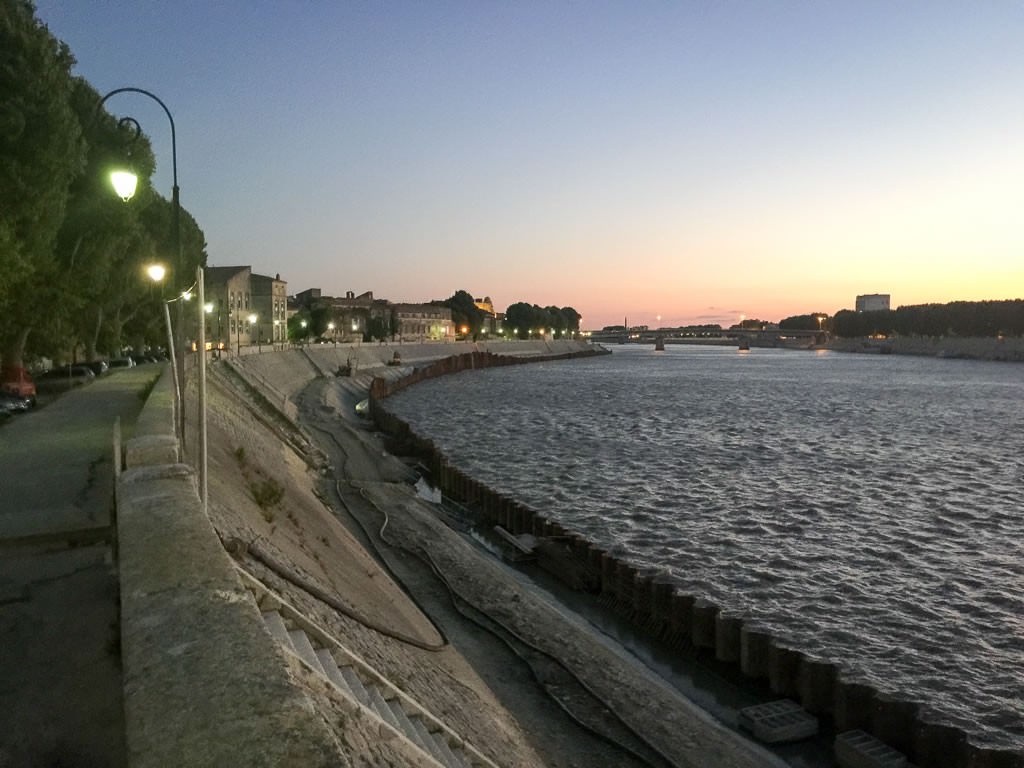