The Legacy of Astoria 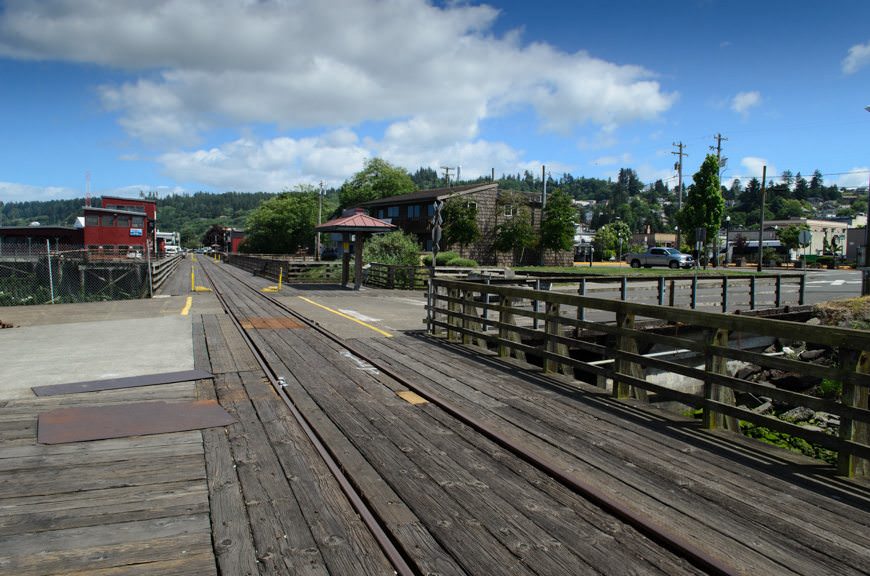 “Ideas can be powerful. They have a life of their own. Some let you down – and some others have totally unforeseen consequences.”

It’s both a sad and happy day here onboard Un-Cruise Adventures’ S.S. Legacy. Sad because we have arrived at our final port of call on this weeklong Legacy of Discovery river cruise that has taken us along the Columbia and Snake Rivers. Happy, because our final port of call is one of my favorite on the whole length of the Pacific Northwest: the beautiful little town of Astoria, Oregon. 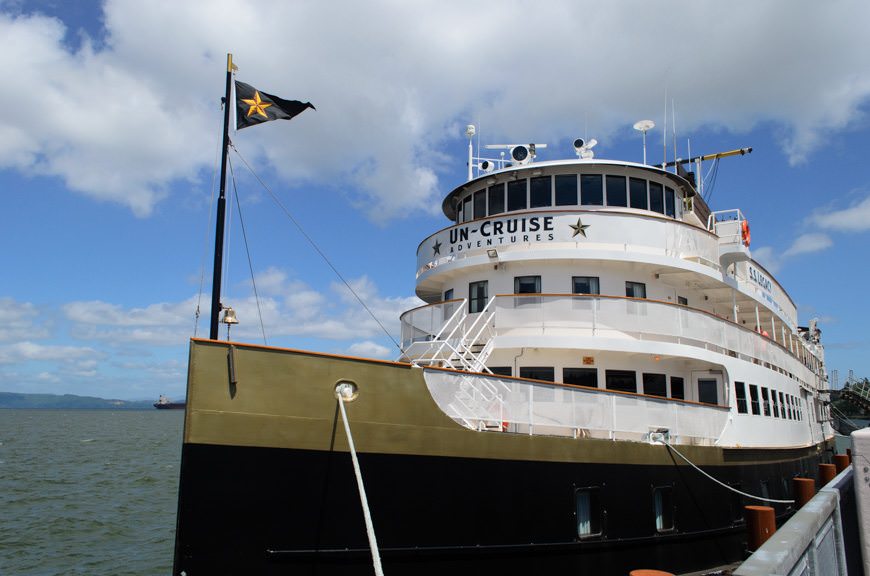 If you’re a movie buff, you’ve seen Astoria before. It served as the backdrop for The Goonies, Kindergarten Cop, and The Ring 2, among others.

Un-Cruise offered guests a full day of touring here, from historic Fort Clatsop to the Astoria Column and the Columbia River Maritime Museum – and I’m sorry to say I brushed off most of it. This is one of my absolute favorite towns, and I wanted to maximise my time here. 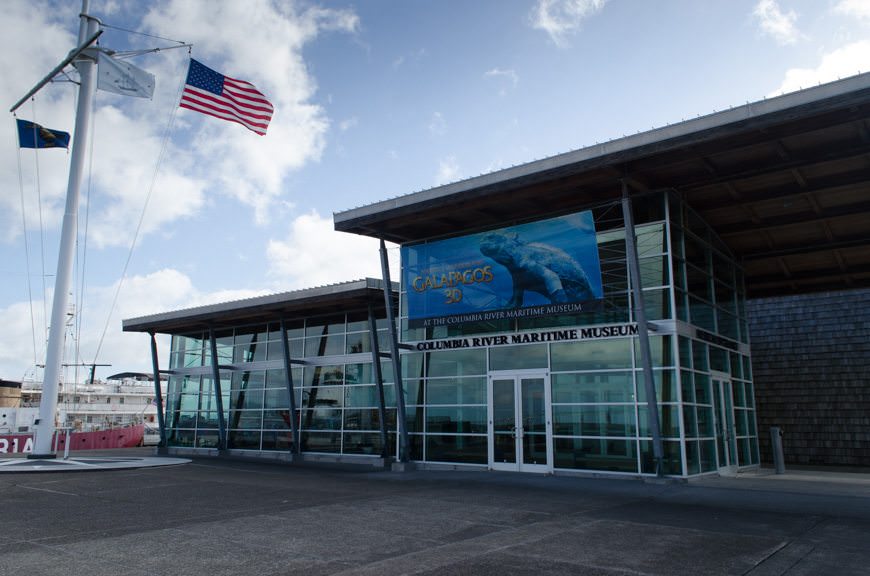 The Columbia River Maritime Museum in Astoria is one of the best I’ve been to. Photo © 2015 Aaron Saunders

In 2005, I toured Astoria and the nearby town of Seaside, Oregon – gateway to the picturesque Cannon Beach, with its defining Haystack Rock that you’ll no doubt remember if you watched The Goonies. Apparently, the town just had celebrations to mark the 30th anniversary of the film’s release. God, I feel old!

In 2008, I visited the Astoria Column, toured downtown, and even rode the length of the Astoria Trolley – which you can hop aboard for $1 from Noon until 5:00 p.m. 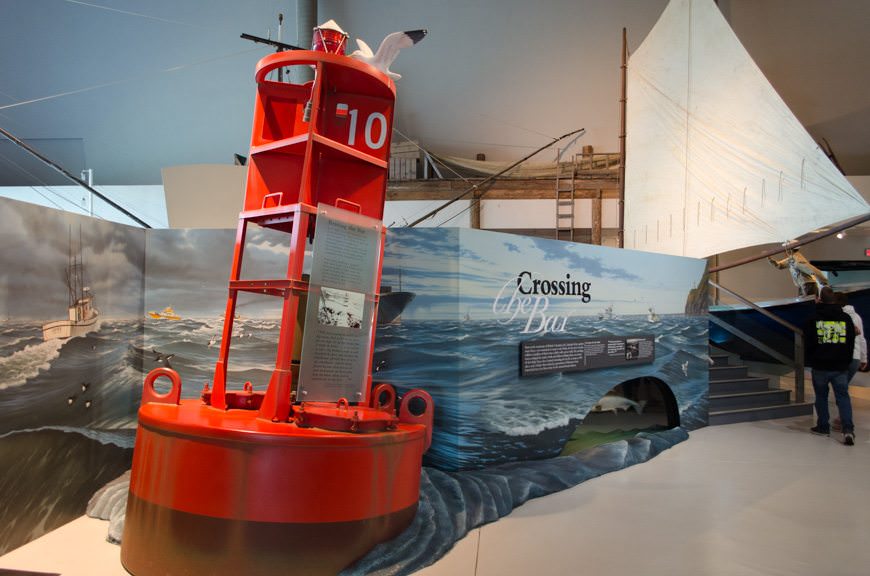 There’s plenty of interactive displays throughout the museum, including full-sized boats and nautical devices – like this gigantic buoy. Photo © 2015 Aaron Saunders

But I’ve always been here on big cruise ships –on Holland America’s Oosterdam, to be precise – a ship so large it has to dock on the other side of the olive green Astoria-Megler Bridge. To dock right in the heart of town aboard the S.S. Legacy is a real treat, and the very definition of the small-ship advantage. 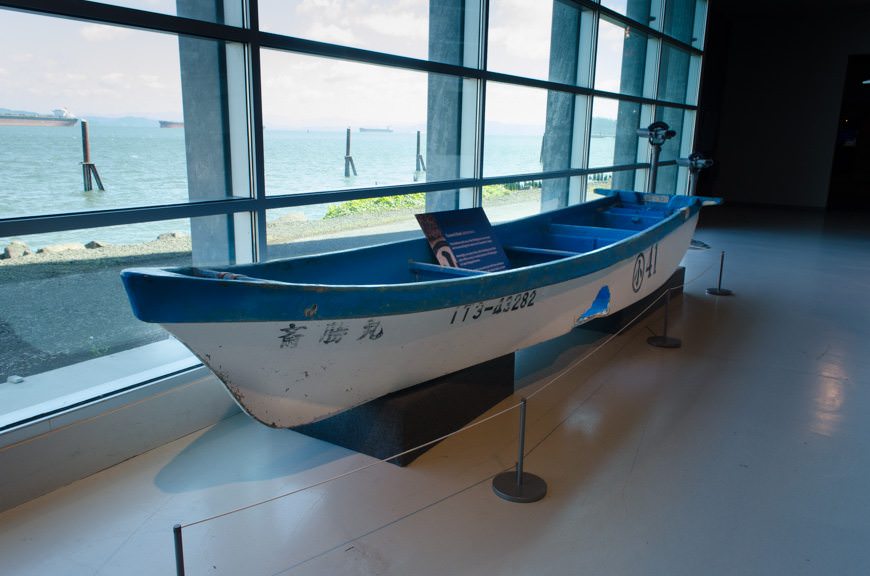 The museum also houses a fishing boat washed clear across the Pacific by the Japanese Tsunami in 2011. Photo © 2015 Aaron Saunders

My first stop of the morning: the Maritime Museum, which I visited with two of my fellow guests; a fantastic couple that I’ve had the privilege to get to know well over the past week. That’s the other small-ship advantage: you connect with people on a much more personal level on a smaller ship than a big one. 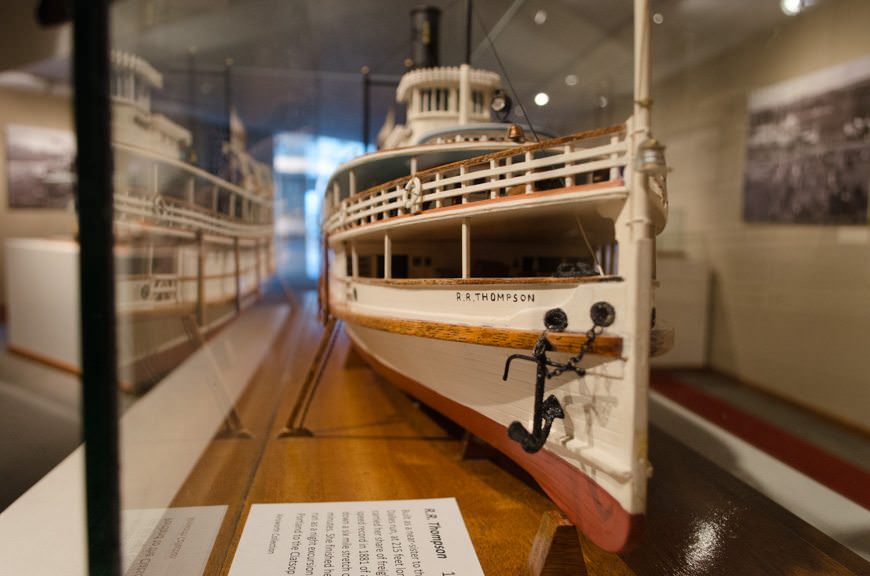 Do you like models of classic ships? Sure you do – and there’s plenty here to admire! Photo © 2015 Aaron Saunders

And what a maritime museum this is! The best I’ve seen outside of the Maritime Museum of the Atlantic in Halifax, Nova Scotia, Canada. After all, have you ever seen a museum that features a full Coast Guard rescue cutter mounted on its side at a 45-degree angle to indicate how badly ships get tossed around on the open Pacific? 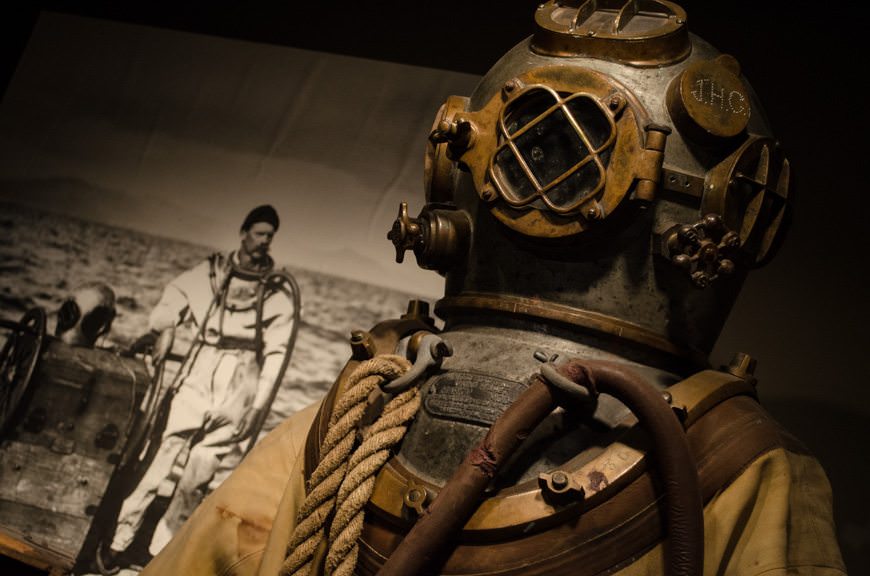 The Maritime Museum not only highlights the history of passenger and freight shipping in the Pacific Northwest; it also serves to educate the public on the Columbia Bar that exists just outside the mouth of the harbour.

One of the most dangerous stretches of water in North America, the Columbia Bar’s turbulent waters have claimed hundreds of vessels throughout the years. Most notably, this began with John Jacob Astor’s overseas expedition to found Astoria in the first place. 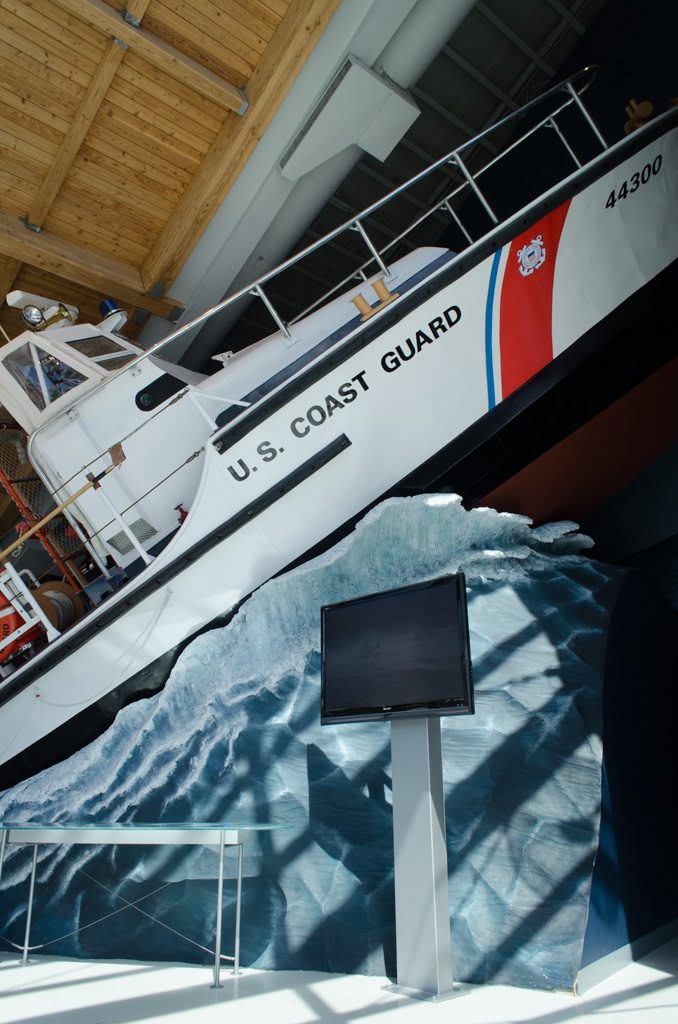 Without a doubt, this is the museum’s most elaborate exhibit! Photo © 2015 Aaron Saunders

Arriving off the coast of present-day Oregon in March of 1811, Captain Jonathan Thorn of the Tonquin sent two successive skiffs of men to their deaths in an effort to establish a safe passage across the bar. Ever-impatient to fulfill his bosses wishes, the experienced but unyielding Thorn finally just sailed Tonquin straight across the bar – ignoring the pleas of his own drowning men thrashing about in the water.

Such was early life on the unforgiving Pacific Ocean. 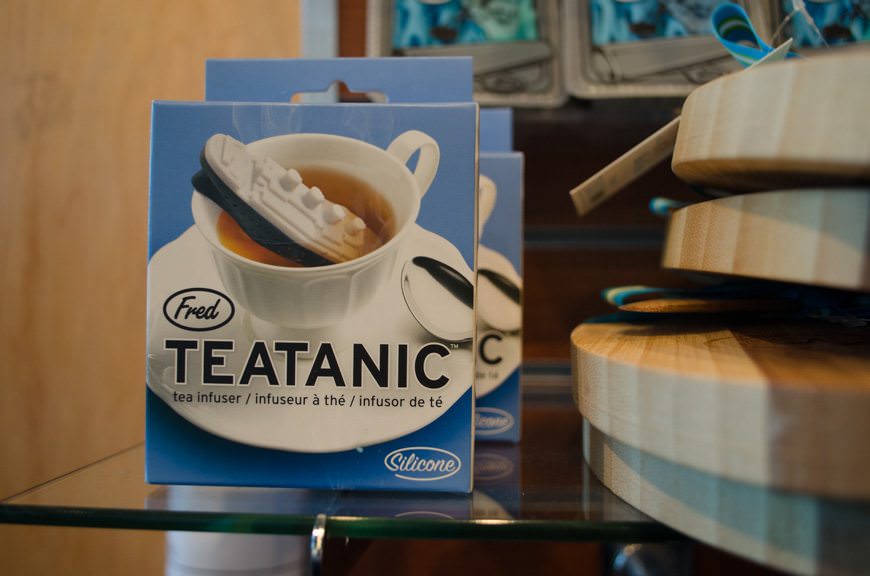 Astoria is so-named for John Jacob Astor, who sought to establish a trading outpost here to conduct business with Asia, which at that time simply couldn’t get enough of the luscious furs that the local Indian tribes were producing. Astor envisioned an empire where he could purchase furs for pennies on the dollar, only to turn around and sell them to eager Asian buyers willing to pay top-price for what was perceived as the ultimate in luxury goods.

Astor’s forward-thinking vision is the only reason Astoria exists today. The much more famous Lewis & Clark Expedition merely reached the Pacific; settlement of these lands wasn’t in their long-term plans. In fact, the Lewis & Clark Expedition had tragic consequences: in 1809, Meriwether Lewis blew his brains out with a revolver; the result of an arduous and often extraordinarily dangerous journey that left the famed explorer with what we’d now call Post Traumatic Stress Disorder, or PTSD. Unable to cope with what he’d seen, done, and had been up against, Lewis chose to end his own life. 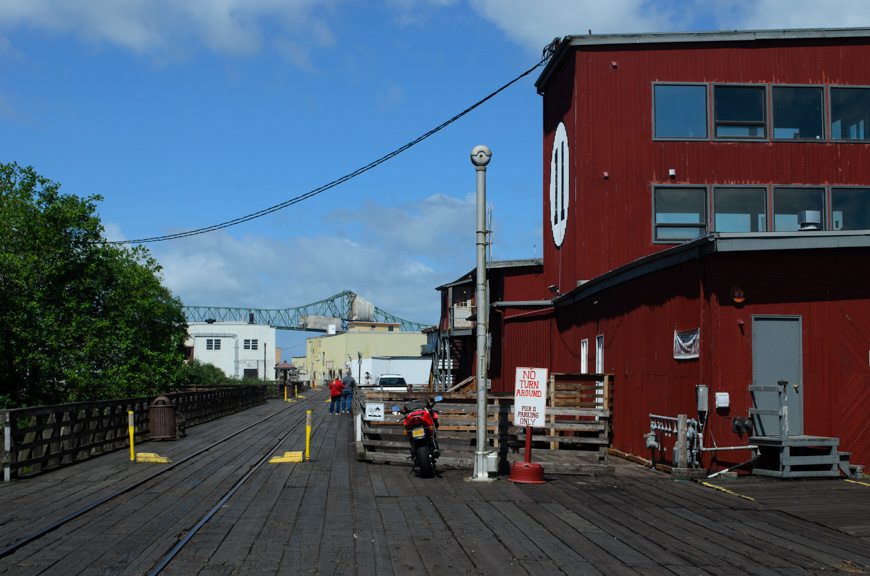 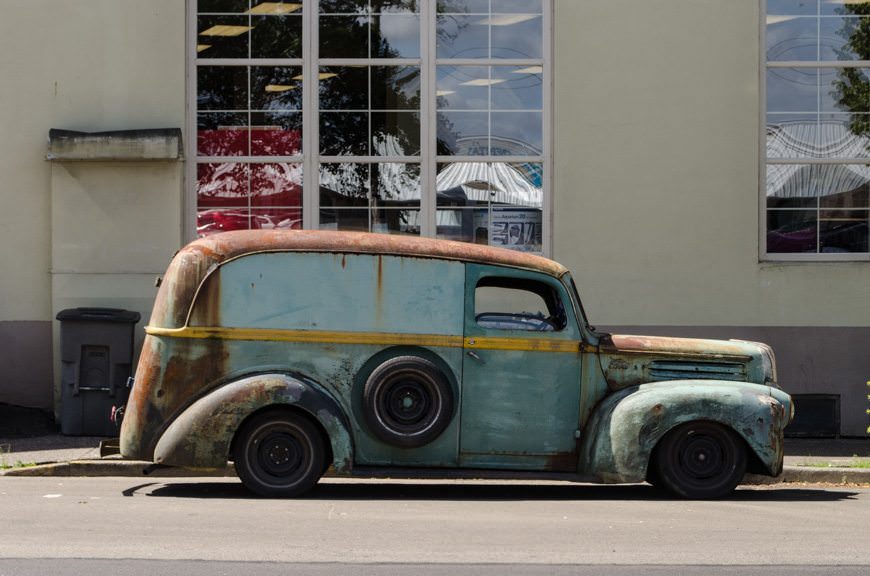 Likewise, Astor’s expeditions weren’t entirely successful. The Tonquin was sank on its first expedition to buy furs from what would be modern-day Vancouver Island after Captain Thorn provoked the local Inuit, and Astor’s Overland Expedition was nearly eviscerated in the winter of 1811 in Hell’s Canyon, where we were just a few days ago. The journey that we just completed in three days in 2015 took overland commander Wilson Price Hunt nearly three months during the spring of 1812.

So how did I spend my afternoon? I wandered town. I found both of the town’s local bookstores. I drank some local beer from the Astoria Brewing Company. I found free Wi-Fi. And impressively, I still don’t have my shaving cream! 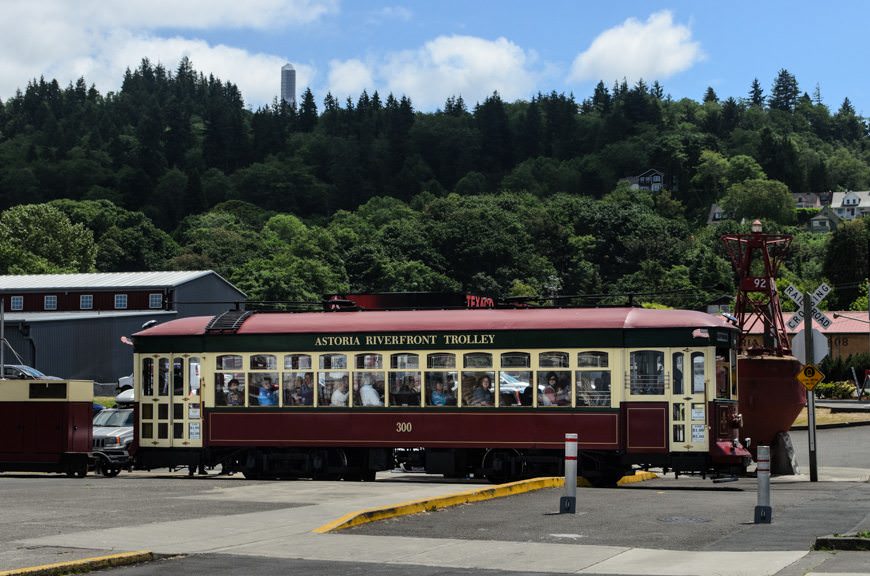 For $1, you can ride the Astoria Trolley the length of the waterfront. Photo © 2015 Aaron Saunders 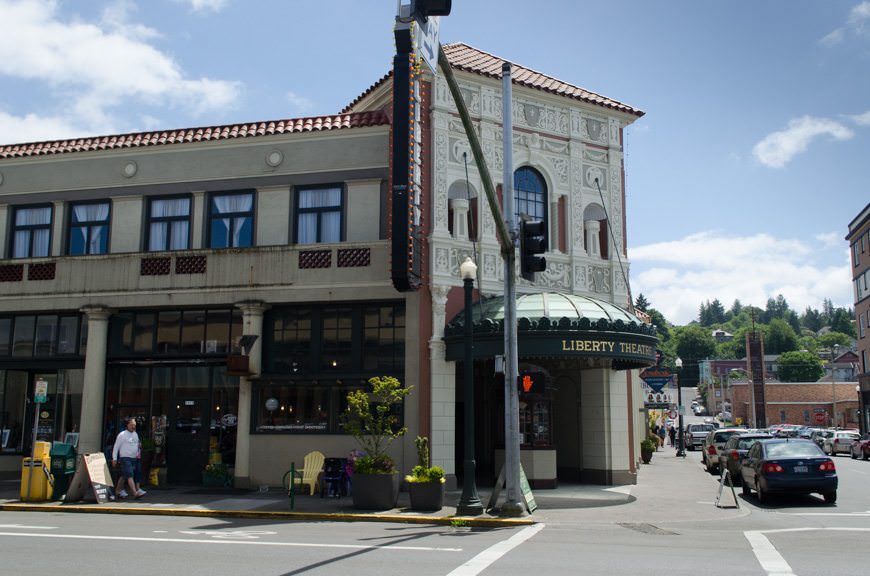 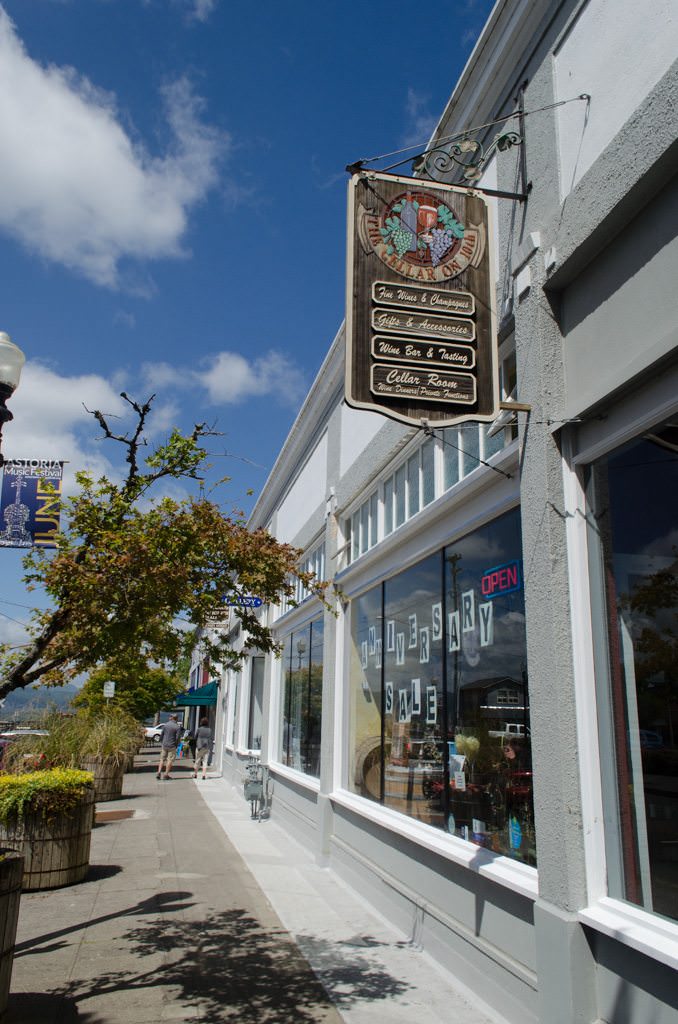 Streets are quaint and navigable…and filled with a surprising amount of Goonies merchandise! Photo © 2015 Aaron Saunders 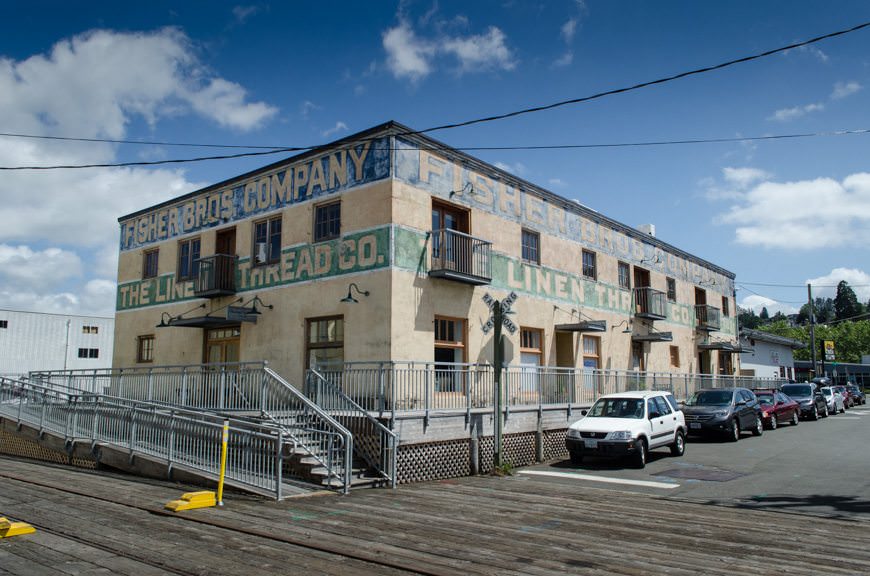 Homage to John Jacob Astor. The first one; not the one that went down with the Titanic. Photo © 2015 Aaron Saunders

Chuck West was a larger-than-life figure in the Pacific Northwest cruise industry. He founded Westours, Westmark Hotels, and CruiseWest, among others. Un-Cruise Captain and founder Dan Blanchard was employed by Chuck West. He learned from West his strong sense of values; his moral and ethical code of business; and Blanchard learned a thing or two about small ship cruising along the way. 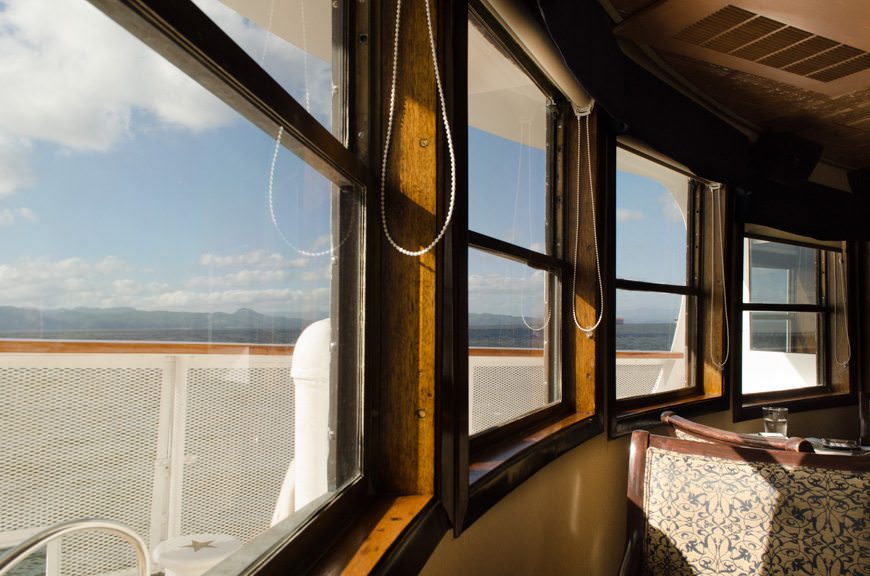 Back onboard the S.S. Legacy, flanked by the beautiful windows in the Lounge. Photo © 2015 Aaron Saunders

Today, Un-Cruise embraces the legacy that Chuck West left behind. CruiseWest, much beloved, is sadly no more. Westmark Hotels and Westours continue to operate within Alaska, but as shells of their former selves.

Un-Cruise Adventures is the Cruise West for our generation – and it’s the highest praise you can bestow upon a company.

So when you walk around the S.S. Legacy and you see photographs of Chuck West, his wife, or his earliest vessels that plied the waters of Alaska in the 1970’s, you begin to understand: the name S.S. Legacy is no accident. It’s purposeful. S.S. Legacy pays homage to West and the legacy he left behind, both in Alaska and the Pacific Northwest. And we have Dan Blanchard and his team of talented folks at Un-Cruise Adventures HQ in Seattle to thank for that.

The Captain’s Dinner on the S.S. Legacy…Photo © 2015 Aaron Saunders 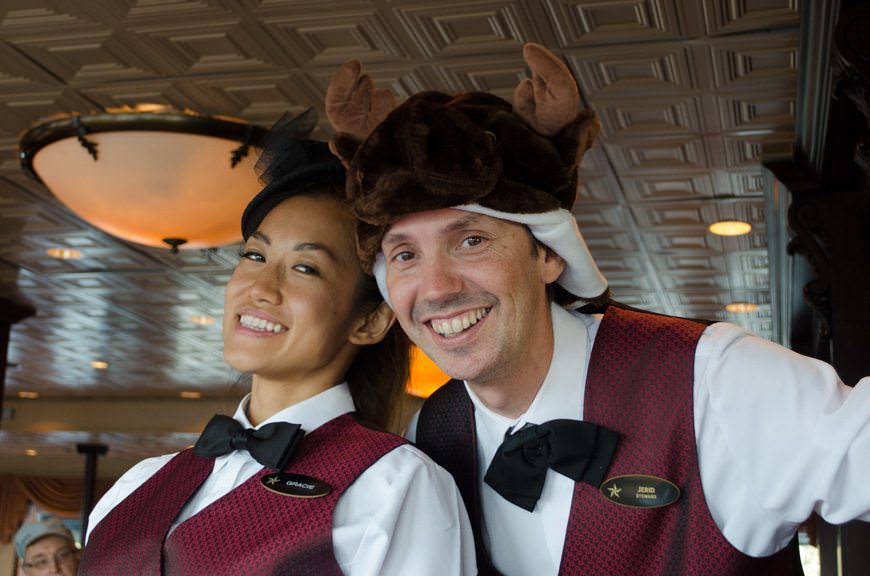 …means guests and crew alike get to wear a hat of their choosing! Photo © 2015 Aaron Saunders 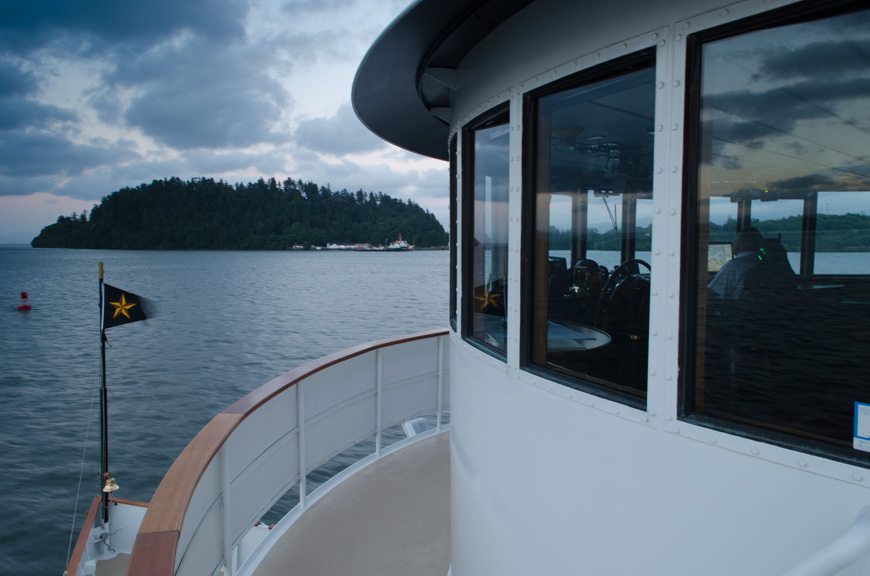 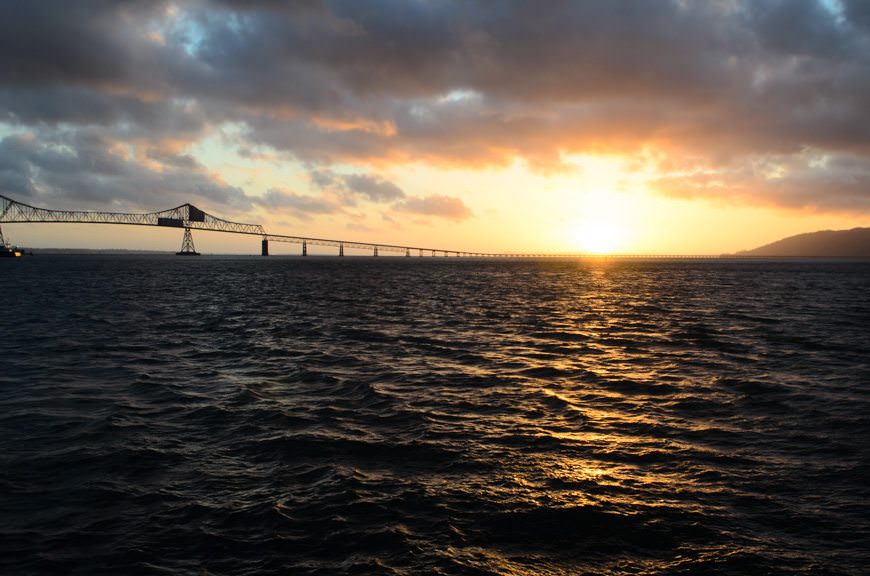 …as the sun dips below the horizon. Photo © 2015 Aaron Saunders

Tonight, we had one final dinner onboard. One last cocktail hour. And one grand time socialising with our fellow guests and crew alike – all of whom number less than 100.

All of this was book-ended by the most spectacular sunset to date; an amber-coloured ball of fire that rapidly descended beyond the man-made elegance of the Astoria-Megler Bridge and disappeared beyond the horizon, never to be seen on this 12th day of June again.

It’s been the kind of day – and the kind of cruise – I’ll miss long after this day is done.

Our Live Voyage Report aboard Un-Cruise Adventures’ S.S. Legacy has sadly come to a close, but stay tuned for our full Voyage Recap! Be sure to follow along on twitter by following @deckchairblog or the hashtag #LiveVoyageReport.