Three States and Hell’s Canyon – All In One Day 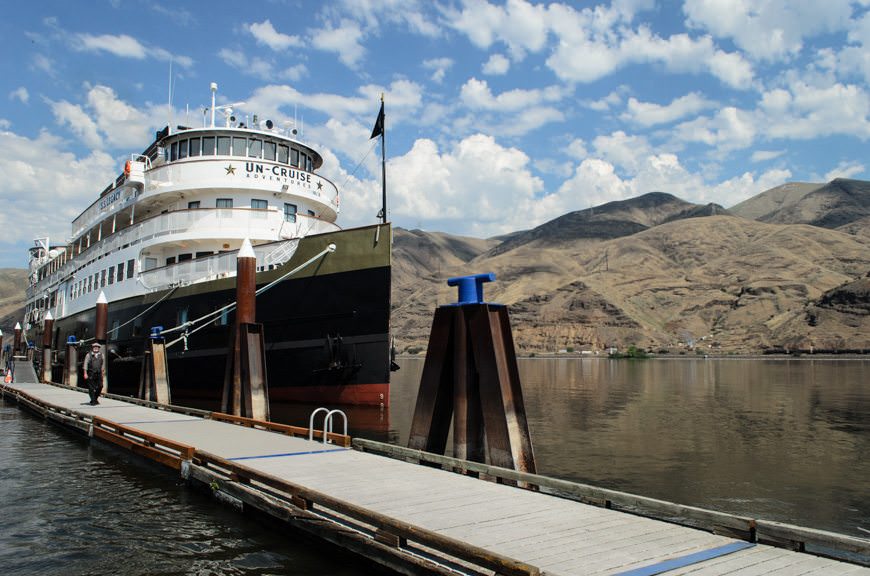 It’s another unseasonably warm day here aboard Un-Cruise Adventures’ S.S. Legacy. For our excursion into the depths of Hell’s Canyon – North America’s deepest river gorge and the disastrous overwinter location of John Jacob Astor’s 1811 Overland Expedition – the mercury is slated to hit an oven-like 101°F, or approximately 38°C. 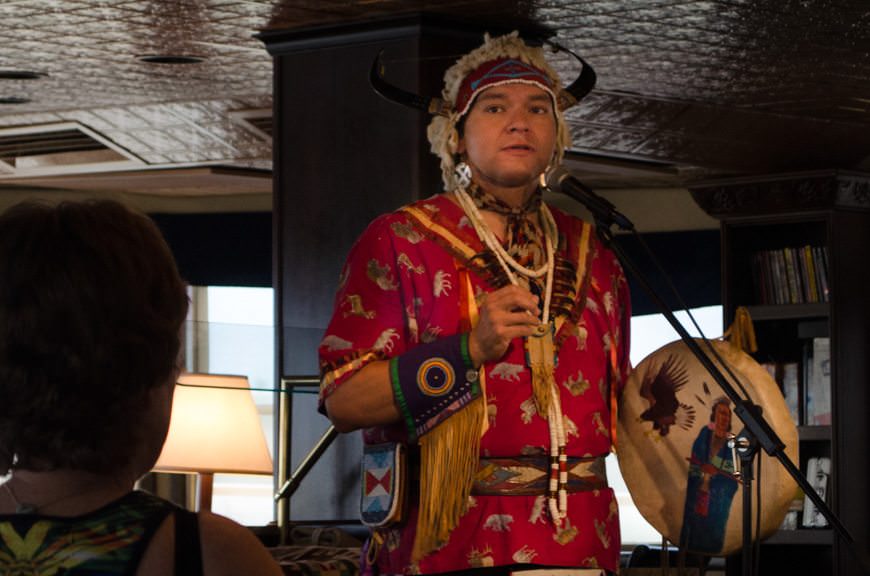 Native Nez Perce member J.R. tells us (in a fun and revealing way) about his tribe’s culture and customs. Photo © 2015 Aaron Saunders

But this morning when I stepped out of Stateroom 207, temperatures were still mild and pleasant, with a cool breeze even circling slowly along the exterior deck as I made my way forward to the shell door leading to the Lounge. Early-riser breakfast and coffee is served here from 6:30 a.m. until the full, plated breakfast is served in the dining room at 8:00a.m.

I rarely, if ever, eat eggs. I just don’t particularly care for them, having – at one time – been allergic to them. When I sail with Un-Cruise, I make an exception to that policy; the eggs served onboard – particularly the omelettes – are sumptuous. On this morning’s menu: a cheese and broccoli omelet, served with fresh fruit, bacon, and potatoes. Pair that with a side of coffee and a glass (or two) of orange juice, and you’ve got a breakfast fit for a real explorer! 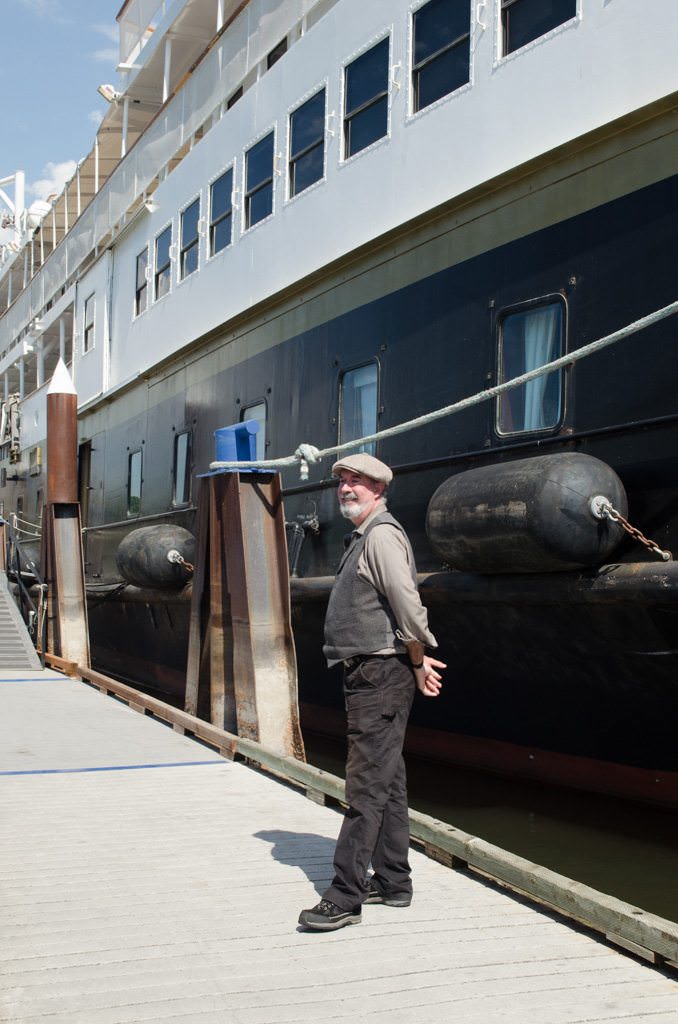 Historical Leader Kenne stands pierside as guests board the jetboat for our full-day tour of Hell’s Canyon. Photo © 2015 Aaron Saunders

But I don’t need to suffer like an explorer. If there is one disclaimer I could give about this voyage thus far, it’s that it’s just not as active as other Un-Cruise itineraries. In Alaska, I was kayaking and bushwhacking almost to the point of exhaustion. In Mexico’s Sea of Cortes, I was scrabbling up high peaks and jumping over tidal pools until my feet ached. 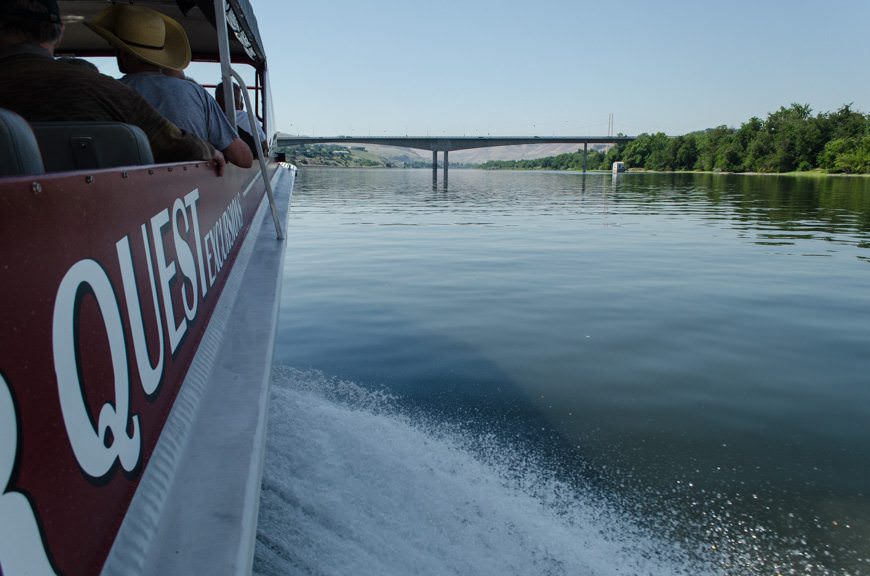 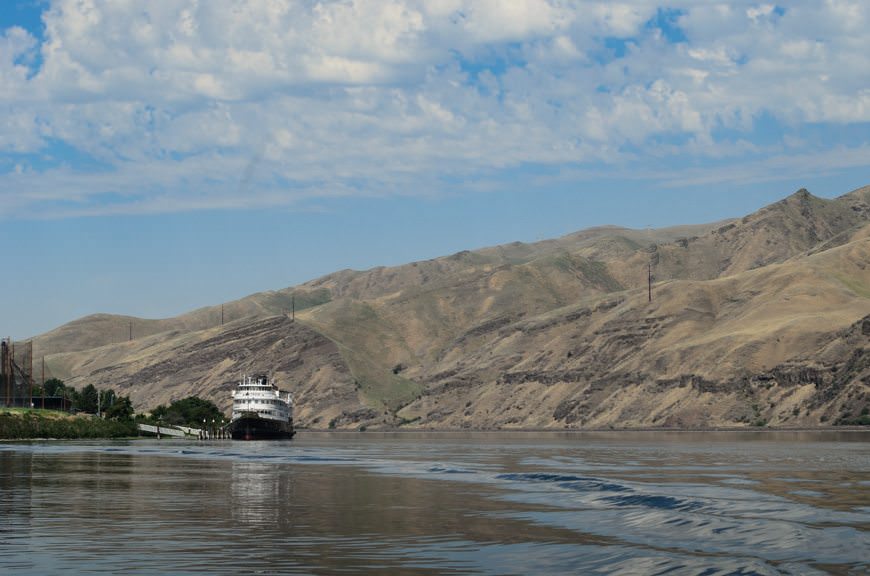 I sat in the Lounge, the Dining Room, a jet boat, a picnic table, a jet boat, the lounge, the dining room, the lounge again. The most physical activity I had today, I think, were the stairs I climbed and the hour and a half I stood on the bow admiring the sunset and talking a mile a minute, as I’m prone to do from time to time.

However, that’s not a bad thing: Un-Cruise bills this as a Heritage voyage focused almost exclusively on history. If you want to go on ten-mile-hikes, “There’s an Un-Cruise for that.” And the focus on history that Un-Cruise provides aboard the S.S. Legacy is second-to-none.

Take today, for instance: our entire day was devoted to learning more about Hell’s Canyon and the Nez Perce Indians that call this region their ancestral home. 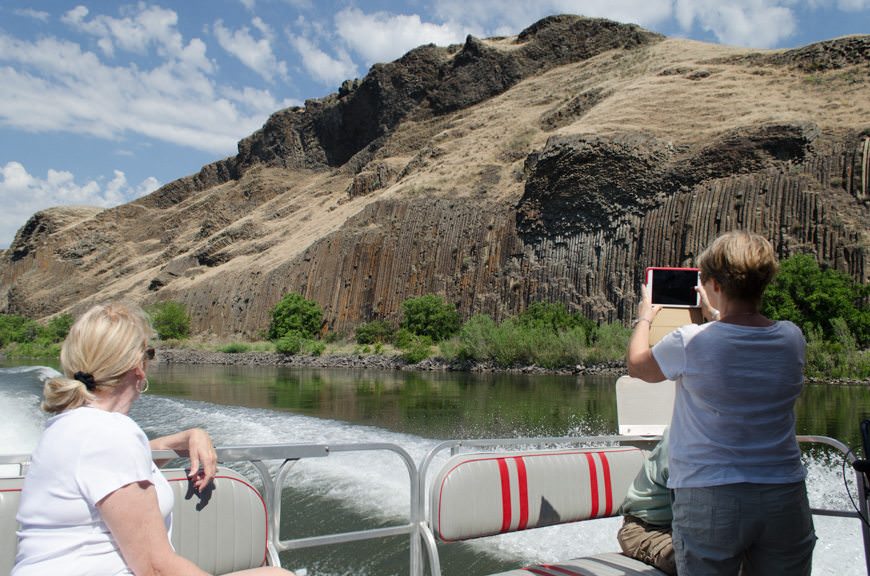 The changes in landscape became more pronounced the deeper we went into the canyon. Photo © 2015 Aaron Saunders

It started with a lecture at 9:00a.m. from local Nez Perce Indian J.R., who has been entertaining three seasons of guests aboard the S.S. Legacy with his traditional native stories, cleverly infused with modern day humour. Perhaps in his thirties and dressed head-to-toe in a beautiful ceremonial robe primarily knitted by his grandmother, he told of how man was created, how the animals of the forest came to be, and even regaled us with songs. Told he’d be telling a song about travelling, he entered into the first few bars of “The Wheels on the Bus” before stopping himself. “Sorry,” he says. “My nephew was listening to that the other day.” 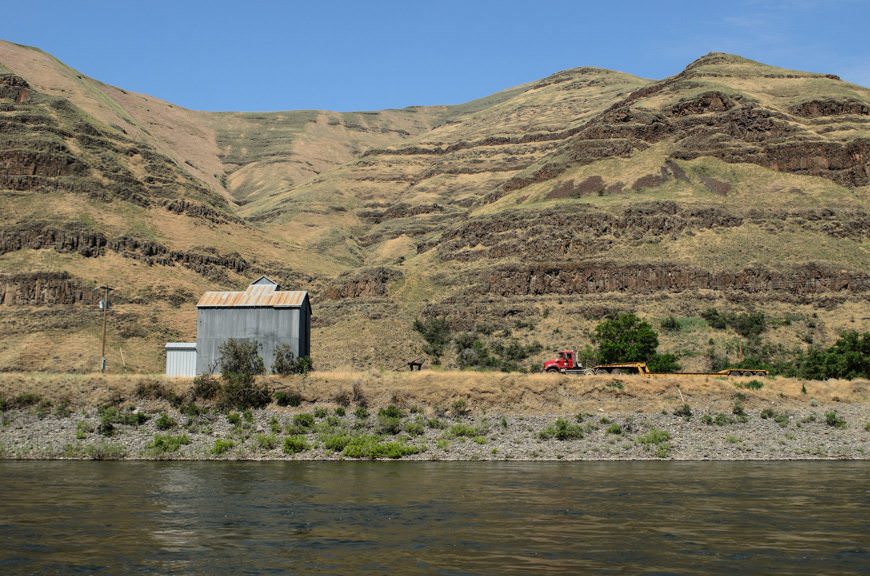 The Nez Perce – who get their name from an Anglicized bastardization of the French phrase for “pierced nose” – are very spiritual. Their oral histories date back thousands of years, and J.R alluded to the frustrations felt by many Native Americans in the United States and First Nations Peoples in Canada: the “white man” simply doesn’t believe their oral histories, preferring to conduct expensive scientific experiments…just to prove what the Natives have been saying all along. There was a lake here at one time. This ship did sink here. A battle was fought here.

Fortunately, that small-minded intolerance is beginning to change, but imagine, if you will, someone from another country coming here right now. They demand you give up all your land and homes. They demand you adopt their language, religion and customs. Would you do it? Probably not willingly. Yet that’s what the earliest settlers did to the Native American of the Pacific Northwest: provide the “shape up or ship out” ultimatum. That the Native Americans had been here for thousands of years was of little consequence; in just two centuries, this landscape has changed more than it did in the past ten. Even ancient Egypt couldn’t match that kind of frenetic pace. 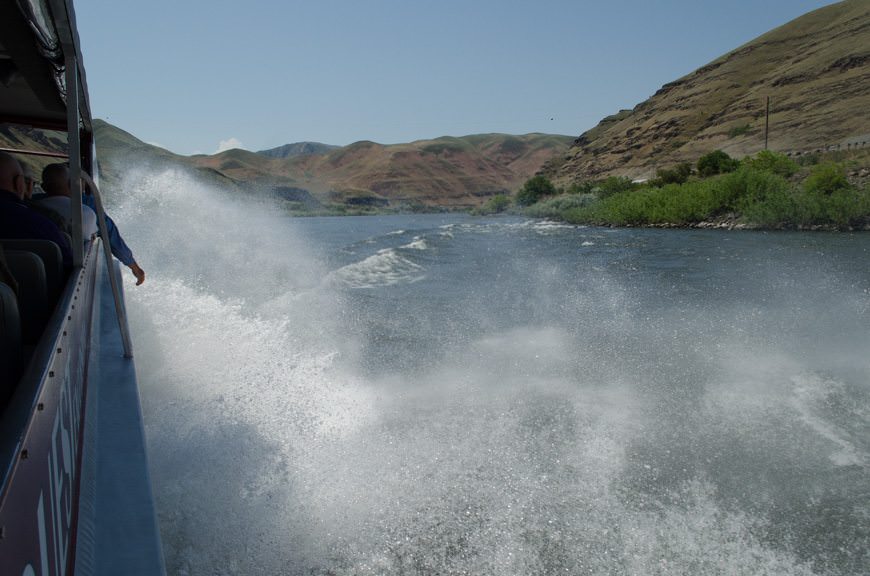 The Snake River – known to early explorers as the Mad River – certainly lived up to its name! Photo © 2015 Aaron Saunders

Following his lecture, we boarded a waiting jet boat on the other side of the pier. This nimble, metal-hulled craft would take us on a full day tour of Hell’s Canyon, including a fabulous lunch ashore at a remote ranch and a brief stop at what is the most remote visitor’s center I’ve seen since I visited Port Lockroy in Antarctica.

Still, our journey through Hell’s Canyon took us through three separate states, all in one day. We left the S.S. Legacy in Clarkston, Washington. We then had lunch across state lines on the Idaho side of the Snake River. And our trip to the Visitor’s Center saw us set foot in some of the most remote parts of Oregon – all in a single day.

Some photos of our fantastic day in hotter-than-hell Hell’s Canyon: 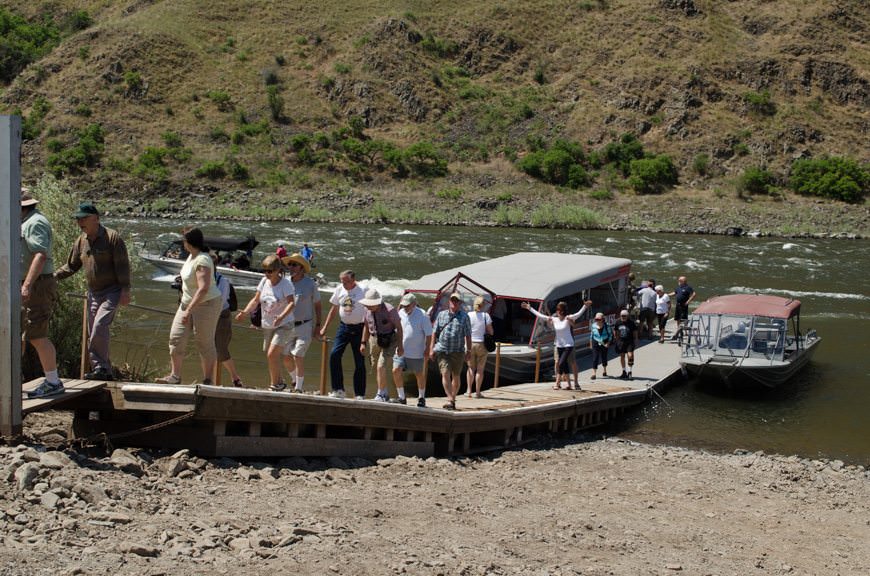 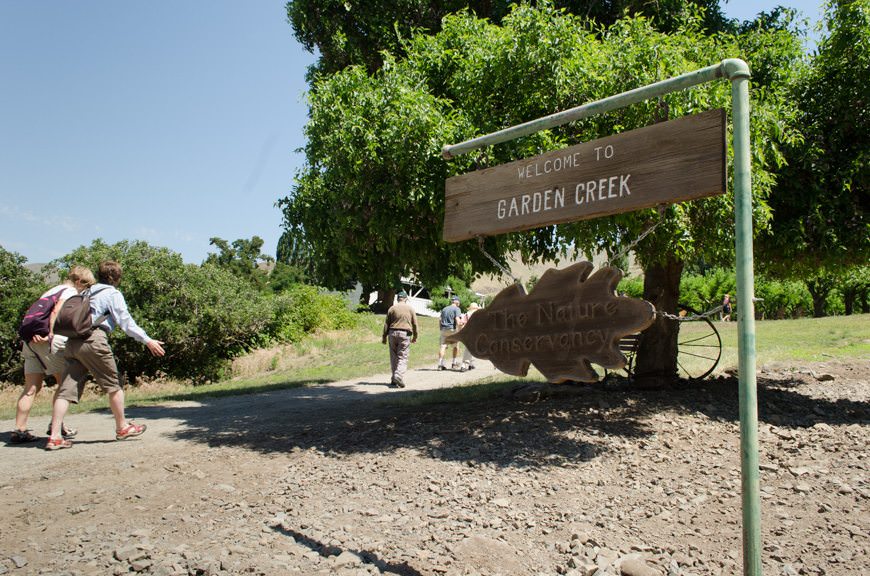 …at Garden Creek – literally located in the middle of nowhere, and completely inaccessible by road. Photo © 2015 Aaron Saunders 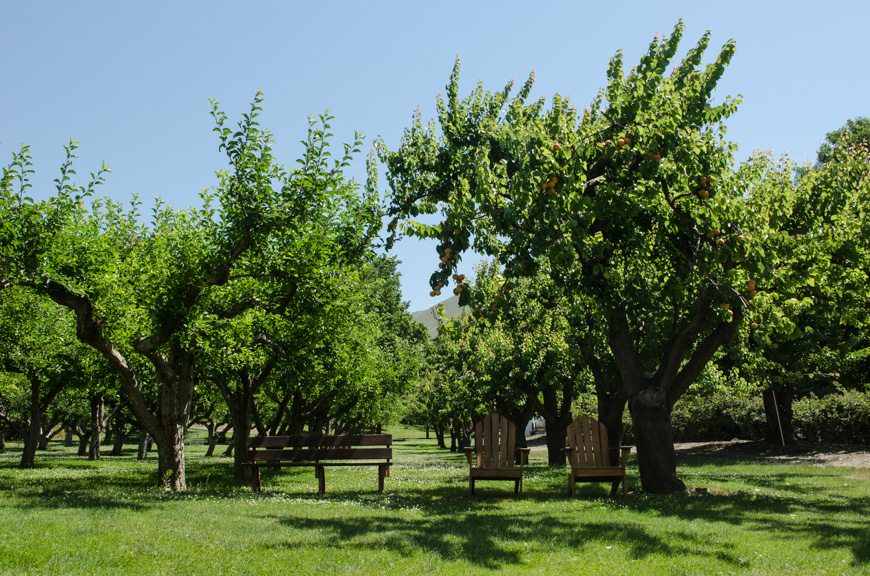 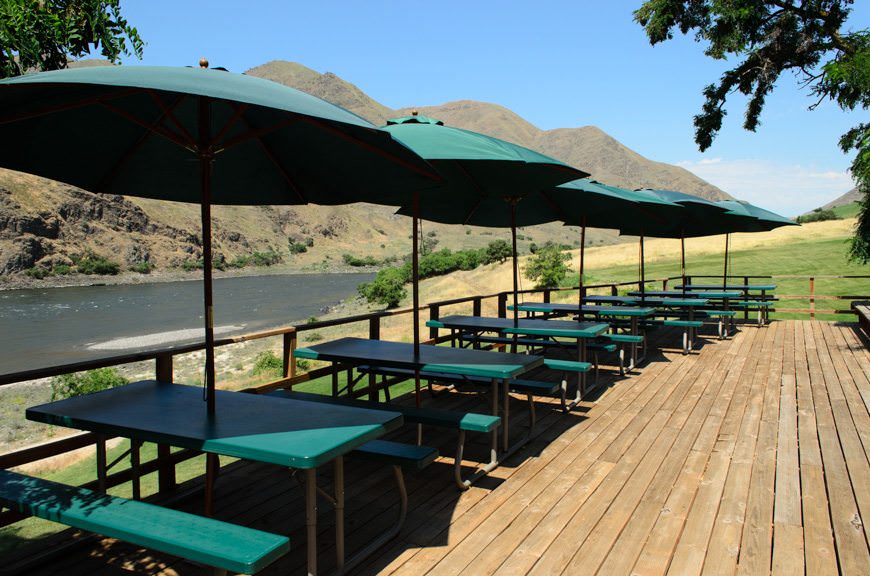 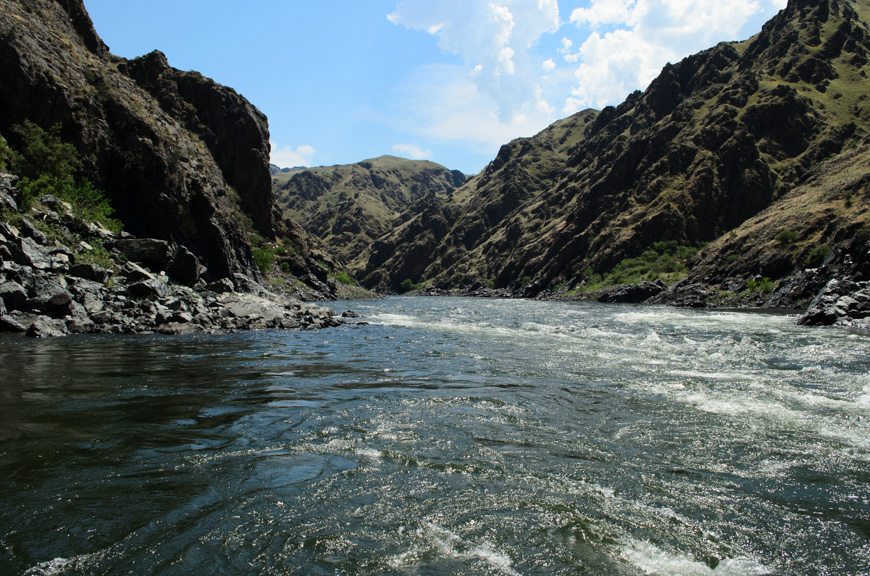 After lunch, it was back onboard the jetboat to go even deeper into Hell’s Canyon. Photo © 2015 Aaron Saunders 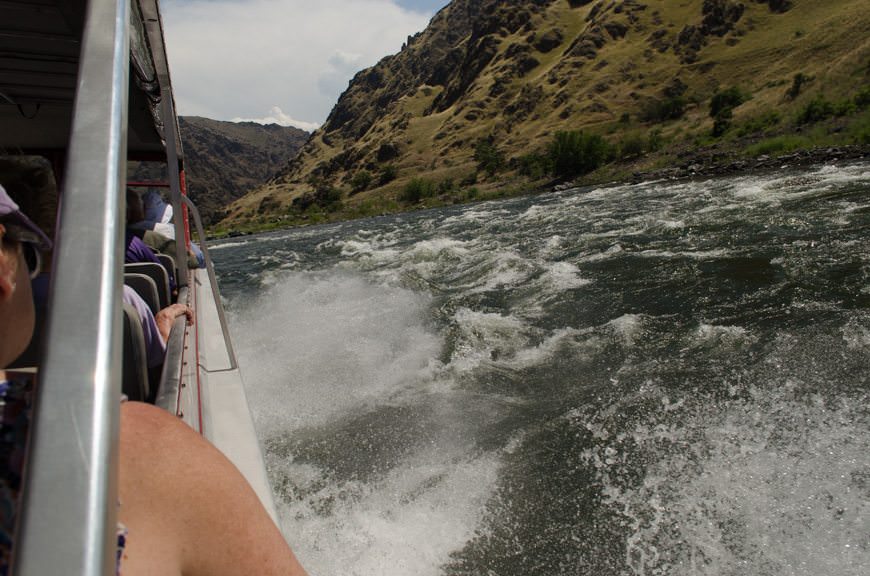 Steamships briefly sailed these waters at the turn of the century to try to service the short-lived mining operations in the heart of the canyon. Photo © 2015 Aaron Saunders 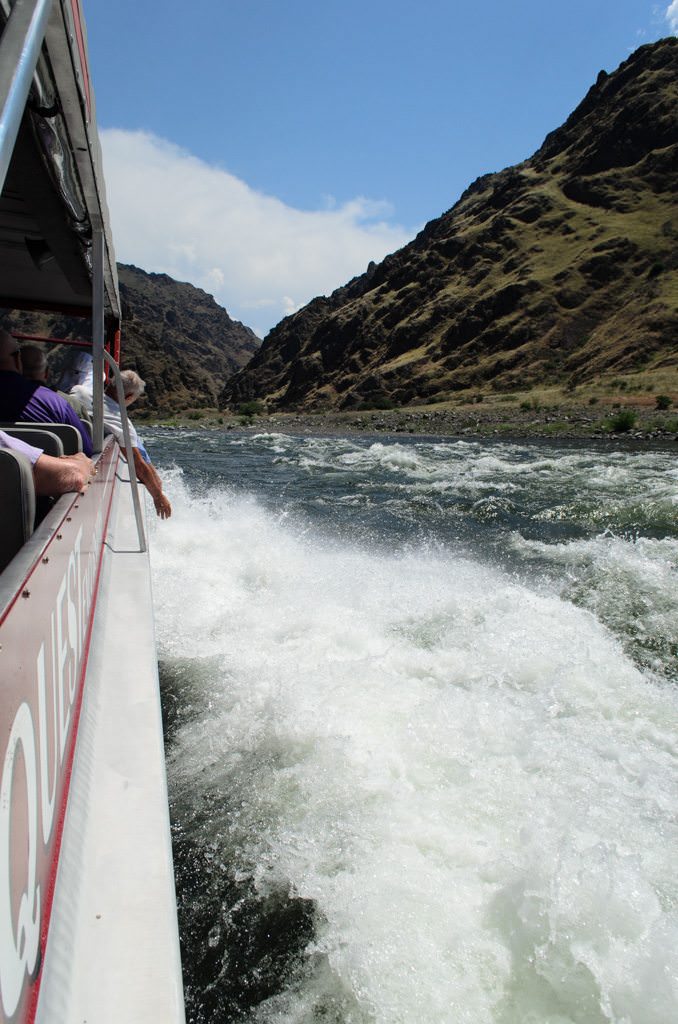 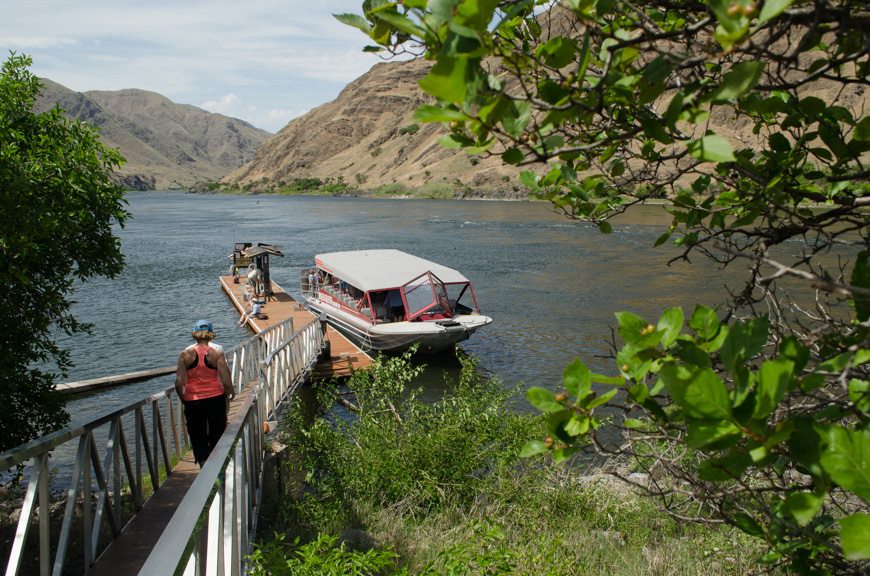 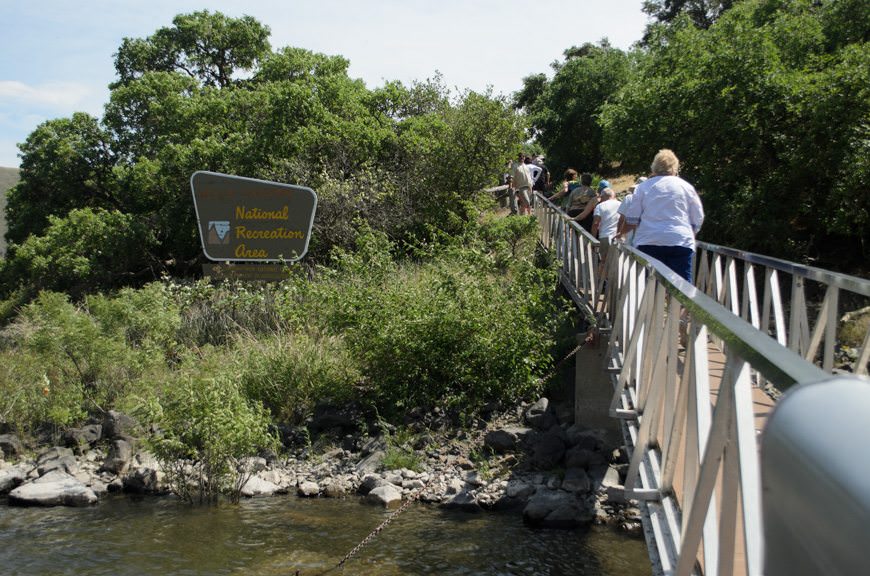 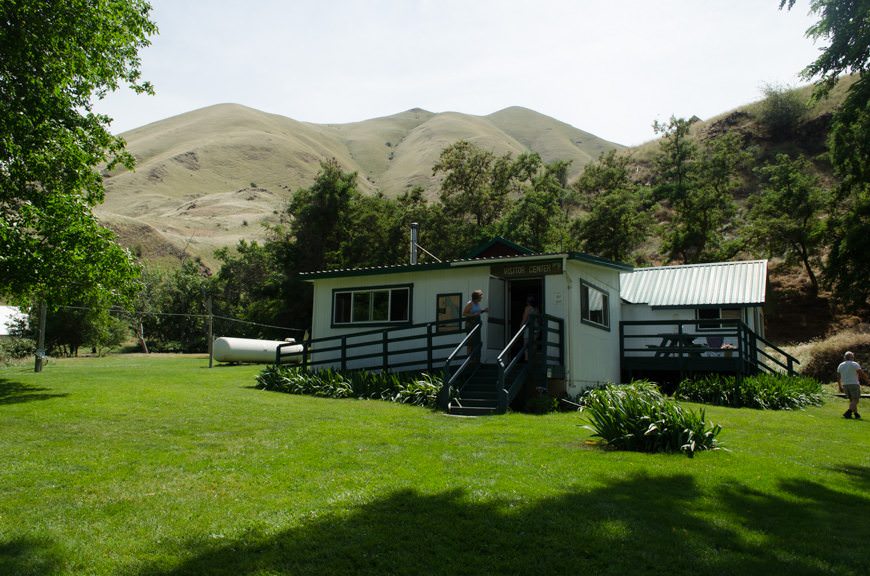 It’s not much, but there’s a small gift shop here and plenty of historic information about Hell’s Canyon. Photo © 2015 Aaron Saunders 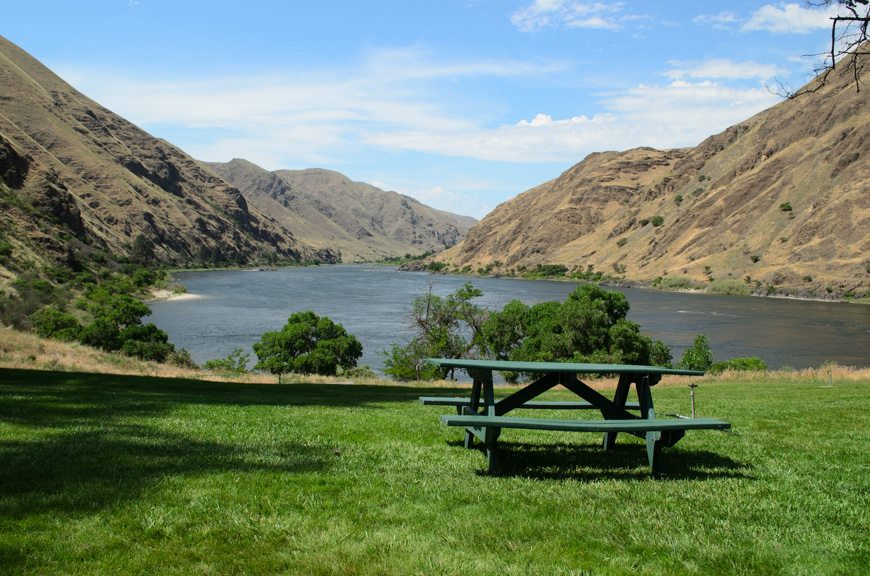 The real showstopper, however, is the view. Photo © 2015 Aaron Saunders 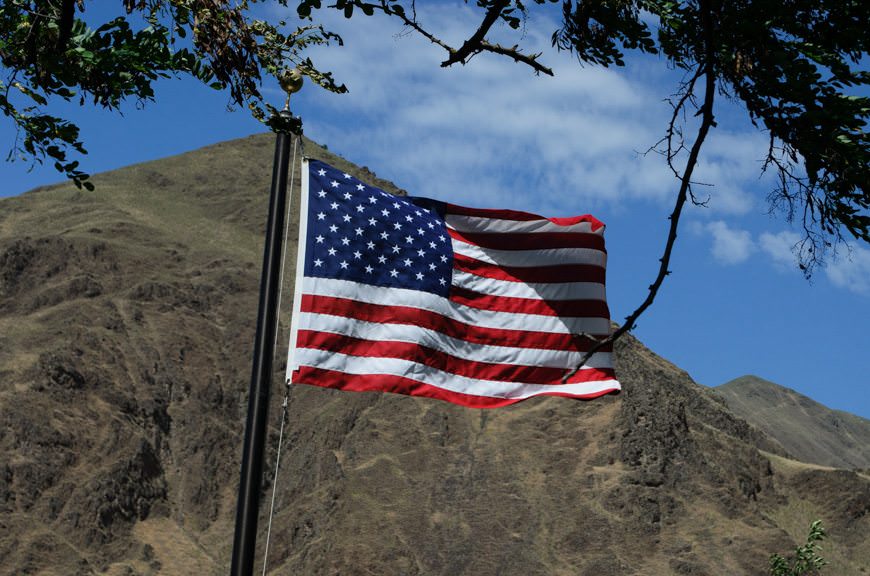 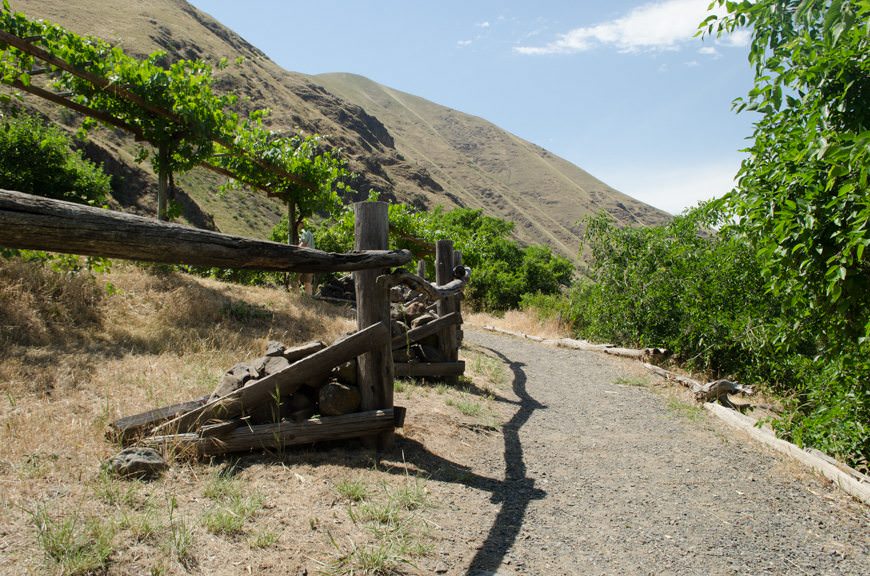 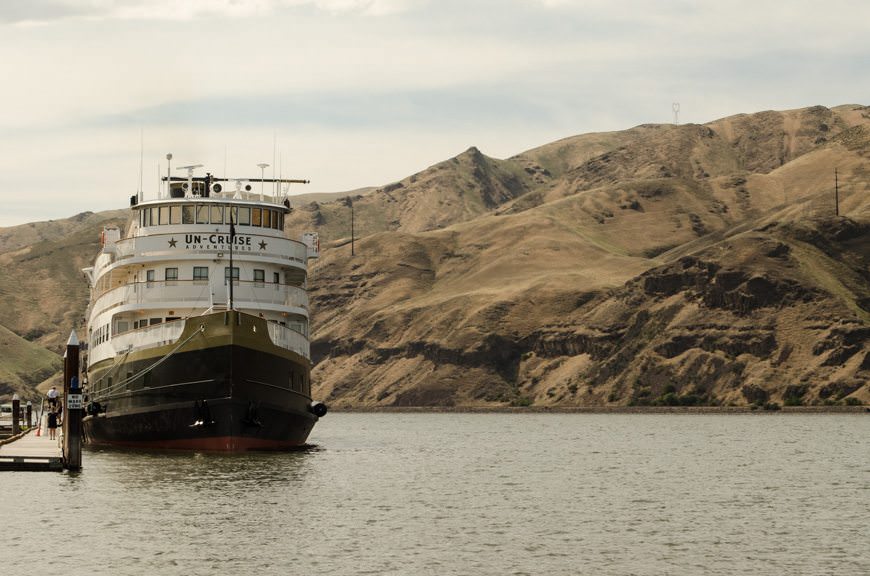 Finally, in the late afternoon, we arrived back at the classy S.S. Legacy. Photo © 2015 Aaron Saunders

It’s also worth noting that Un-Cruise Adventures’ offers two itineraries along the Columbia and Snake Rivers. Both operate roundtrip from Portland, Oregon, but only one – our Legacy of Discovery voyage that is offered between May and November – includes Hell’s Canyon.

The other itinerary, Ameritage! Four Rivers of Wine and History, trades an excursion in Hell’s Canyon for more in-depth explorations in Astoria, Oregon, where an overland journey to the spectacular Cannon Beach is offered. It also focuses more heavily on the delicious and often surprising wines of the region, with multiple vineyard tours and tasting sessions. Only four departure dates are offered for this unique itinerary: August 15, 22, 29 and September 5, 2015. If you’re a wine lover, I’d recommend jumping on one of these! 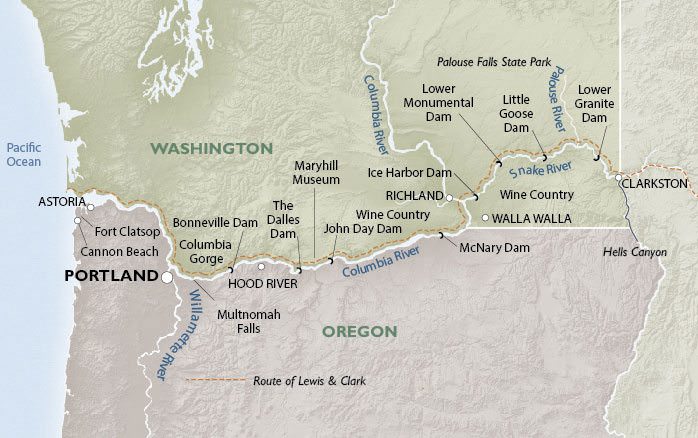 What can I say about tonight? As our Heritage Team Leader Kenne says, “on the S.S. Legacy, every hour is happy hour!” Pre-dinner cocktails with my fellow guests once again left me feeling inspired and humbled by the depth of knowledge and personal experience that each and every one of them brings to this voyage. Dinner was a feast for the tastebuds. And after-dinner drinks accompanied by the turn-of-the century advice of Merry Meriwether’s Miraculous Magical Elixers – a lecture on late 1800’s medicine – left guests socially lubricated and laughing through the evening. 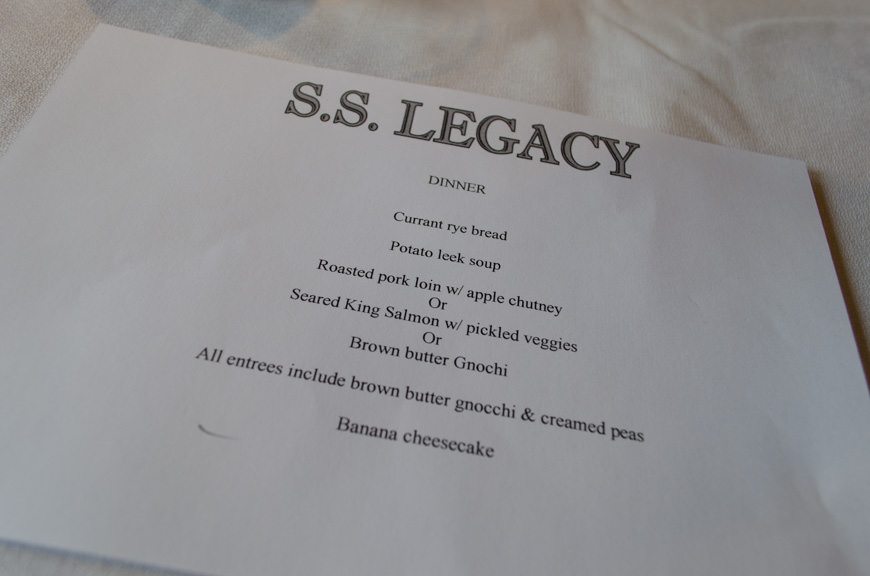 On the menu tonight…Photo © 2015 Aaron Saunders 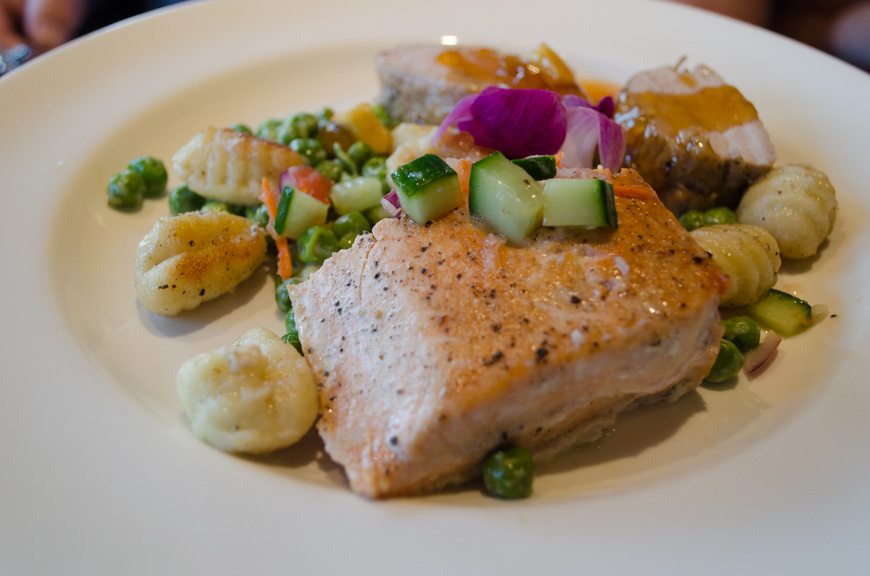 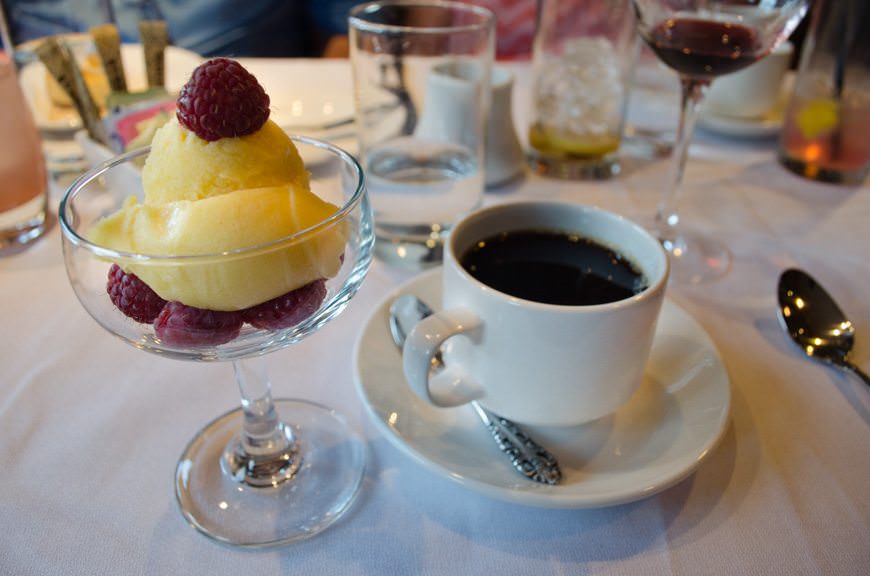 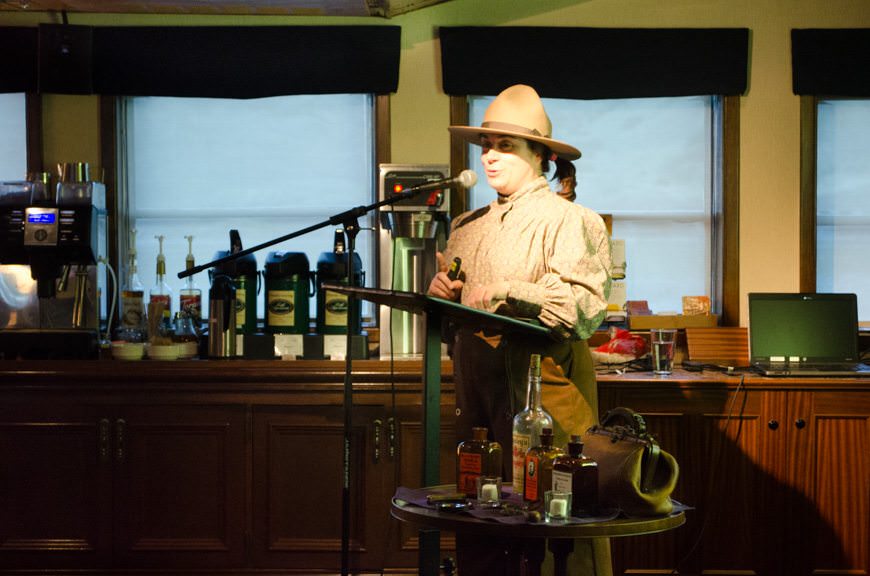 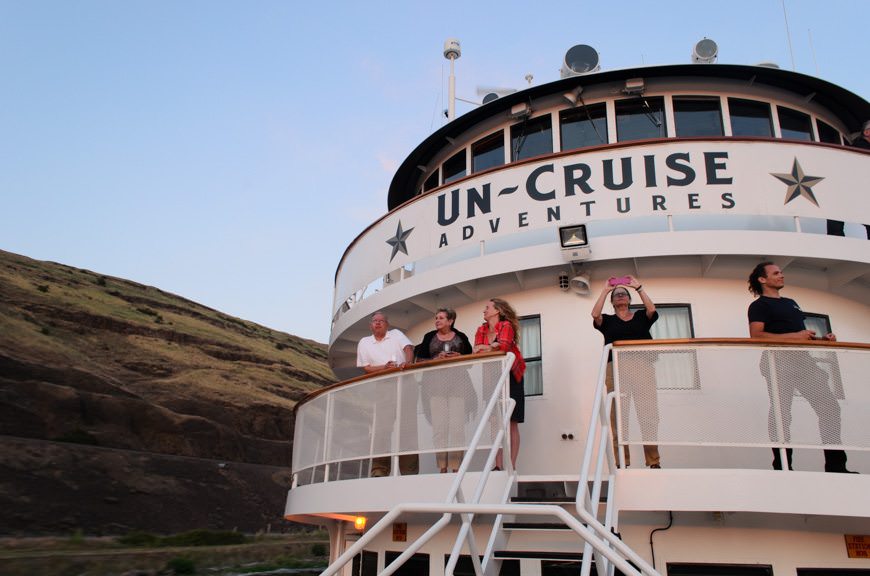 It’s all very carefully planned and engineered to ensure guests have an enjoyable time each and every day. The one thing that Un-Cruise can’t control, however, is the weather – and even then, Mother Nature conspired to give us one of the most stunning sunsets I’ve seen on any trip so far this year.

Standing out on the bow of the S.S. Legacy, with her sharp prow cutting noisily into the water beneath our feet, guests crowded three decks’ worth of railings to watch the spectacle unfold, content in our little world without deadlines and Facebook and tweets and ISIS.

Sometimes it’s good to just live in the moment. Tonight was one of those moments – and we have Un-Cruise to thank for that. 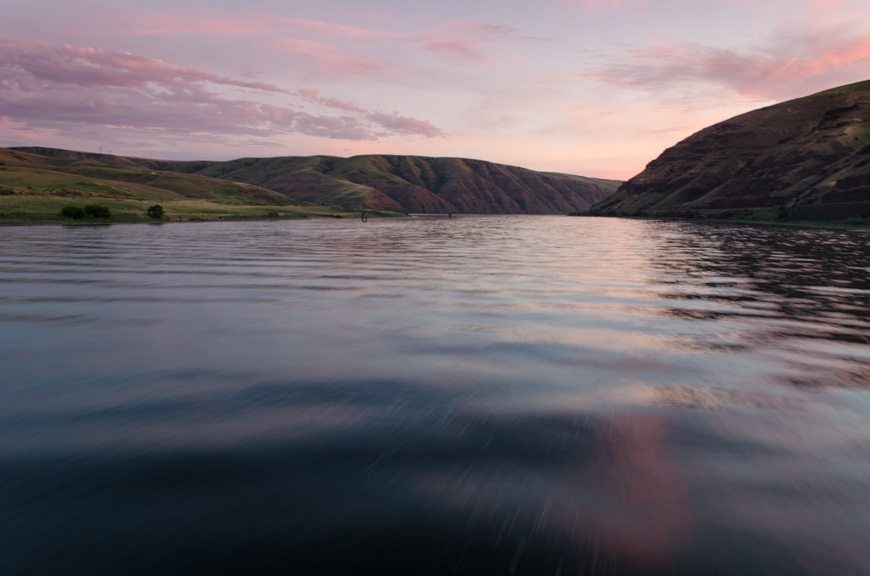 Darkness falls on the Snake River as we begin to make our way westward towards the Pacific Ocean. Photo © 2015 Aaron Saunders

Our Live Voyage Report aboard Un-Cruise Adventures’ S.S. Legacy continues tomorrow as our river cruise expedition takes us westward to Walla Walla, Washington! Be sure to follow along on twitter by following @deckchairblog or the hashtag #LiveVoyageReport.