Un-Cruising Our Way Along the Columbia and Snake Rivers 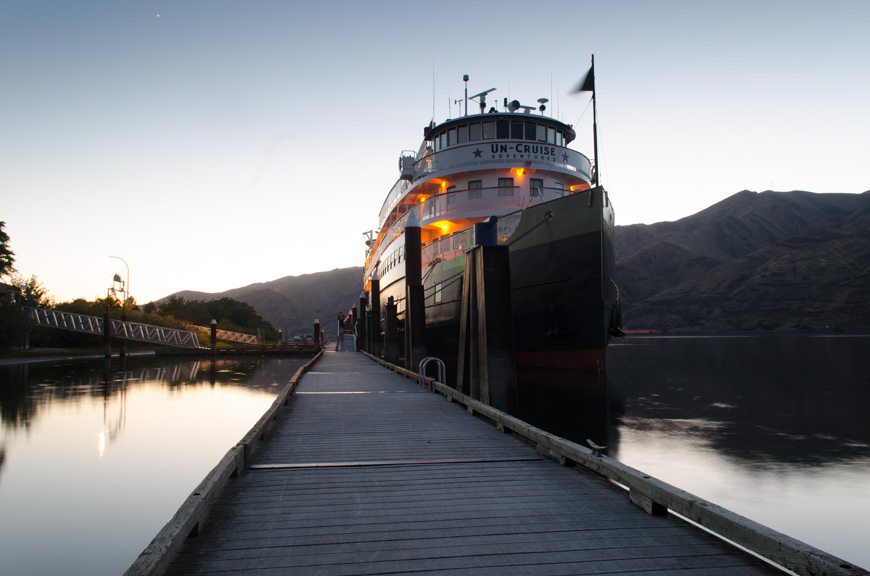 Today, we’re being treated to a full day of scenic cruising onboard Un-Cruise Adventures’ S.S. Legacy, as we trade the Columbia River for the Snake River on our weeklong Legacy of Discovery river cruise that began on Saturday in Portland, Oregon.

I love scenic cruising days for two reasons: they let me selfishly focus on the ship and its amenities, along with the unique history that surrounds the places we’re sailing through. And the Columbia and Snake Rivers are just loaded with history. 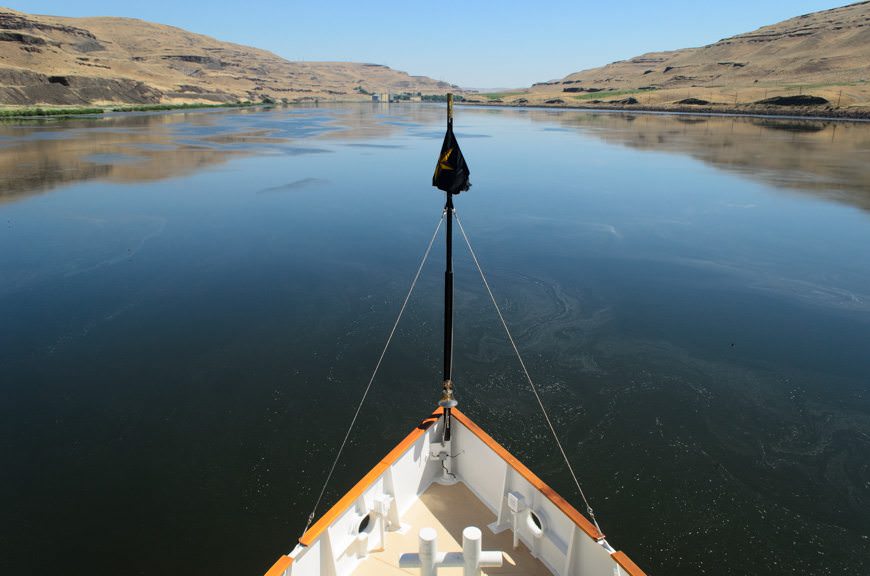 Guests aboard the S.S. Legacy were treated to a full morning and afternoon of scenic cruising on the Columbia and Snake rivers today. Photo © 2015 Aaron Saunders

Everyone knows the exploits of Lewis & Clark, but fewer are familiar with John Jacob Astor’s 1810 expeditions to develop a trading outpost on the Pacific Coast that would, one day, become known as Astoria, Oregon.

Just a few years after William Clark and Meriwether Lewis reached the Pacific Ocean, Astor (the first John Jacob; not the later descendant of the same name who would go down with the Titanic in April of 1912) assembled two expeditions, both of which had the ultimate goal of finding the entrance to the Columbia River and forming a colony there for the sole purpose of creating an easy staging route for selling furs to China.

The seagoing expedition aboard the Tonquin set sail from New York under the command of the capable but ridiculously rigid and unyielding Captain, Johnathan Thorn. 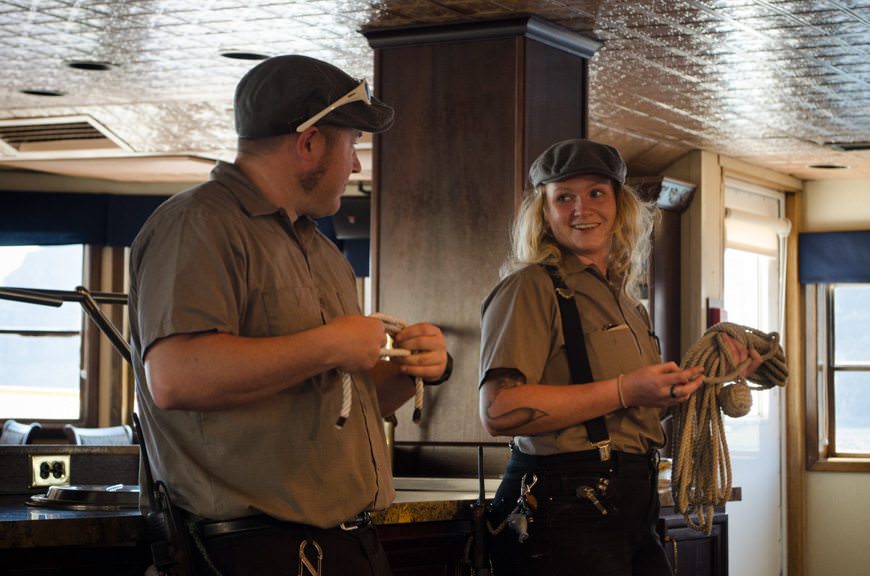 This morning, guests could learn how to tie marine knots with the S.S. Legacy’s knowledgeable crew. Photo © 2015 Aaron Saunders

The American-born Thorn had no time or patience for the expert Scottish fur traders that Astor had acquired to join the expedition, nor for the happy-go-lucky French-Canadian voyageurs that liked to pass the time by singing snappy chansons at the top of their lungs. Repeatedly.

Famously, Captain Thorn tried to leave them all behind on South Georgia Island, near Antarctica, as the ship was preparing to round Cape Horn. The stranded Scots and voyageurs managed to row back to the escaping ship, where one member of the crew threatened to murder Captain Thorn if he didn’t let the men aboard. 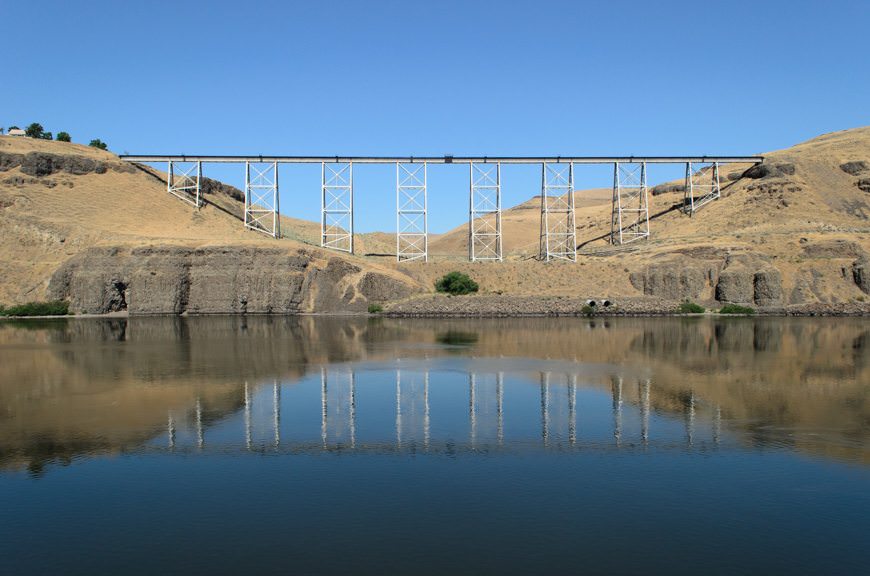 Re-equipped with a full complement of men, Tonquin finally arrived off the Columbia Bar on the Pacific Coast of modern-day Oregon in March of 1811. Thorn, apparently blessed with the same happy demeanour as Captain Bligh, sent two successive groups of men on what amounted to suicide missions in small dinghy craft. They were to find a safe passage through the Bar, but were overcome by the fast-flowing current and atrocious sea conditions and lost to the churning seas. Finally, the Tonquin muscled her way through the Bar and into the relatively sheltered waters of Cape Disappointment.

Despite the loss of life, Tonquin had arrived at the mouth of the Columbia River, and the first land was cleared for what would become Astoria, Oregon. 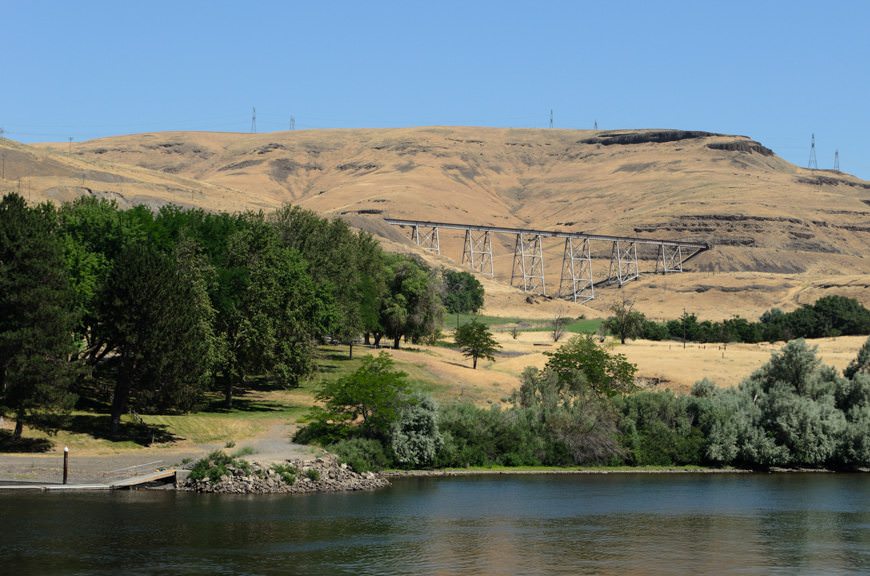 The landscape as the Columbia changes into the Snake is endlessly fascinating, and far different from what you might think of when you think of Oregon. Photo © 2015 Aaron Saunders

At the same time, Astor’s Overland Expedition wasn’t faring much better. Led by a capable and well-liked gentleman named Wilson Price Hunt, the large overland expedition would follow a different, more direct route than Lewis & Clark had before them, in the hopes of discovering a more efficient passage for goods and avoiding the much-feared Blackfeet Indians.

Accompanying the party for a time was Sacagawea, the young Indian girl that had initially joined William Clark and Meriwether Lewis on their own expedition. But the diplomatic Hunt, travelling with a massive party that was ill-equipped for the journey and lacked sufficient experience with the harsh winters of the Pacific Northwest. 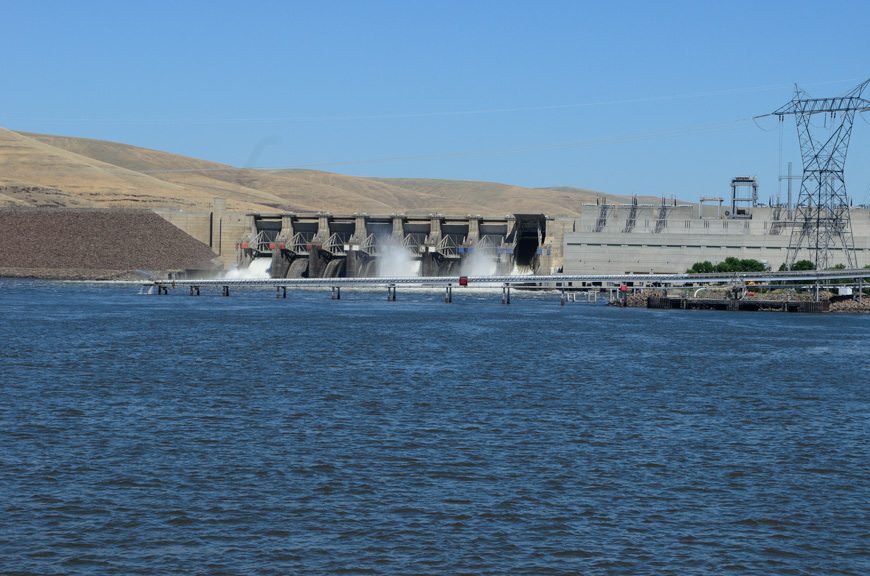 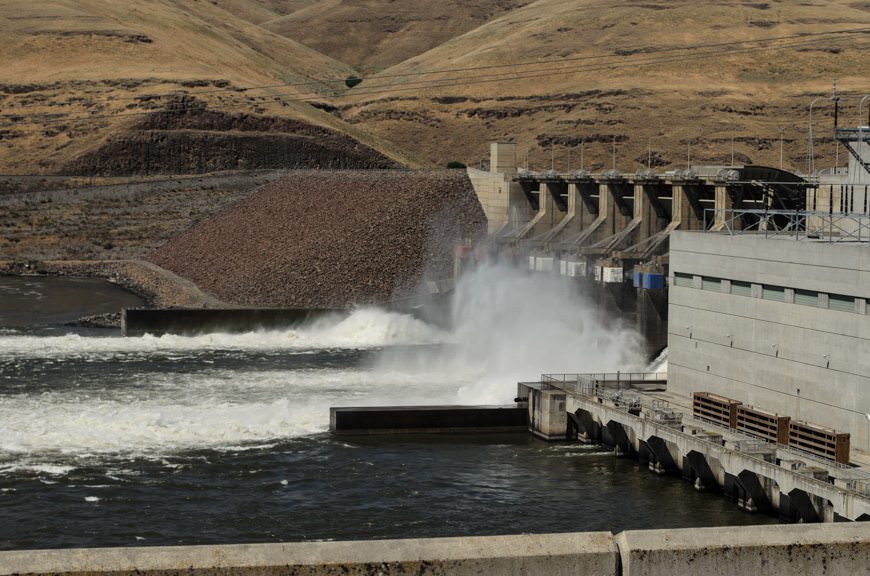 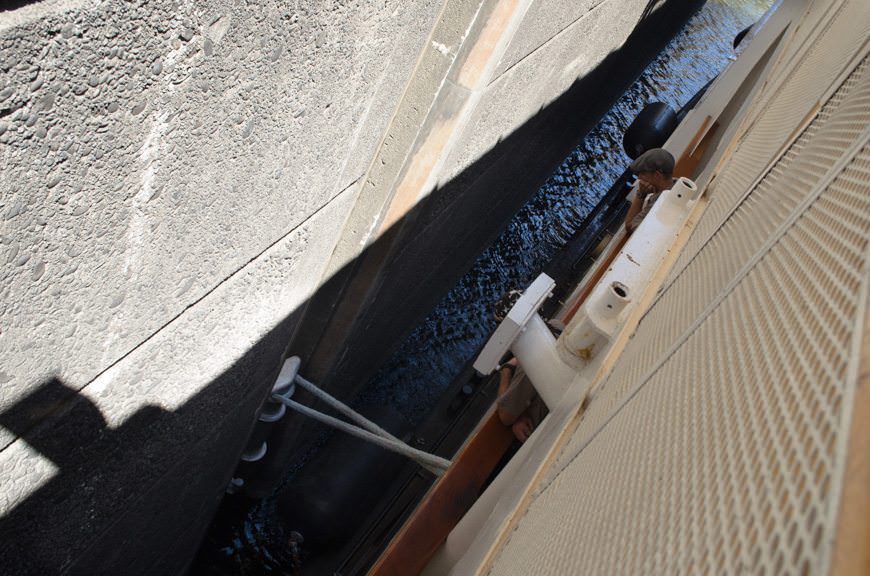 …and the closer the S.S. Legacy gets to the lock walls! Photo © 2015 Aaron Saunders

Even the French-Canadian voyageurs, known for their superhuman-like strength and almost inexhaustible supply of energy, were caught off guard by the rivers they encountered on their way down to the Columbia. You have to remember: this entire area of North America was a huge question mark in 1811; a blank space on the map. All they had to guide them were rudimentary bearings and reports from the local Indians – those, at least, who were friendly and not hostile.

In the end, it’s a miracle anyone from Hunt’s party reached the mouth of the Columbia and the future home of Astoria. The group ended up being separated by a raging river filled with dangerous rapids, blind corners and massive drops. They called it the Mad River, and it claimed canoes, supplies and lives with a certain evil diplomacy as the Hunt Overland Party struggled to navigate it. 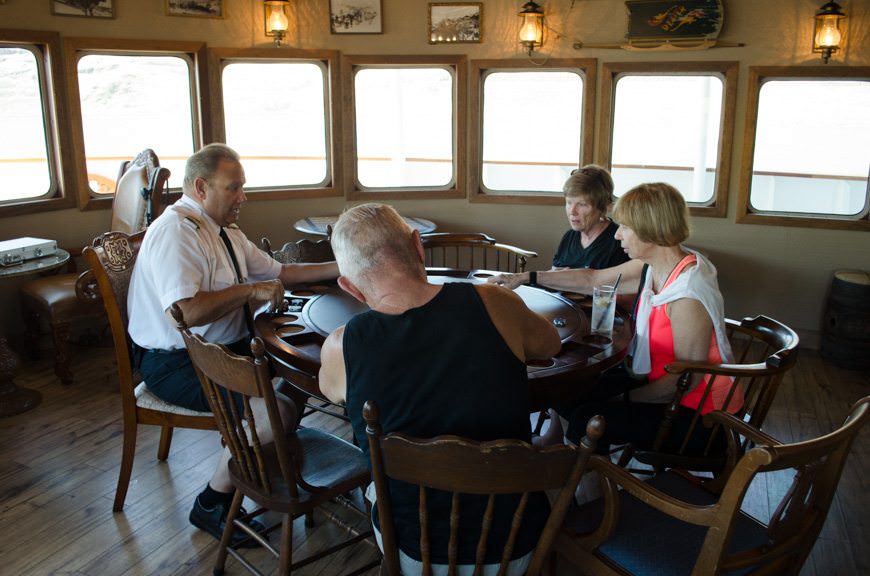 Captain Scott gets in on a friendly poker tournament in the Pesky Barnacle this afternoon! Photo © 2015 Aaron Saunders

Today, the Mad River is known as the one we’re sailing on right now: the Snake River. Hunt’s Overland Party had the horrible misfortune of becoming trapped in the winter in Hell’s Canyon. They barely survived, aided only by the local Shoshone Indians – one of whom Hunt emotionally blackmailed to lead him and his party of starving, emaciated explorers out of the valley.

We’re going to experience Hell’s Canyon somewhat differently tomorrow: we’re taking a jetboat tour of what is North America’s deepest river gorge. In fact, the entire distance we’re covering in barely two days aboard the S.S. Legacy took Hunt’s party another two months – and today, guests (including yours truly) rested and drank as if they’d been on a strenuous overland expedition. 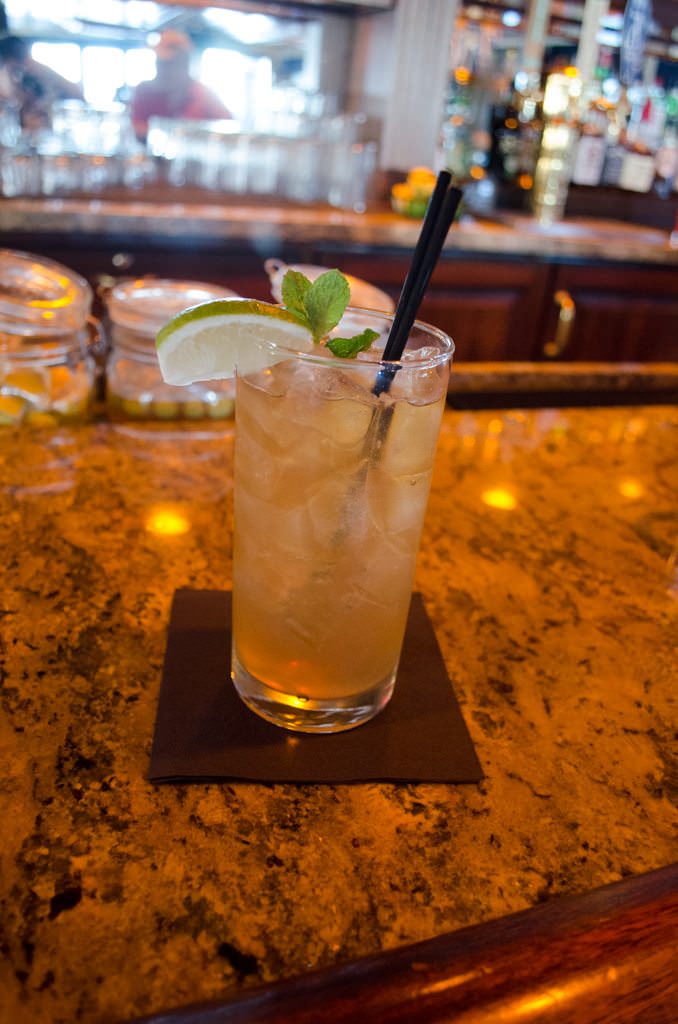 Of course, you can always amble up to the bar for a thirst-quencher. Photo © 2015 Aaron Saunders

The French-Canadian voyageurs were pleased to leave “La Maudite riviere enrage” – the accursed Mad River – behind forever. But even as their journey drew to a close, fate stood against them.

One of the expedition members, voyageur Michael Carriere, apparently became disoriented and wandered onto the wrong trail. Other expedition members were dispatched to find and rescue him, but they came back empty-handed. Travelling with the weakest group who were running low on food and near starving, suspicions of cannibalism hung in the air when any trace of Carriere failed to turn up. 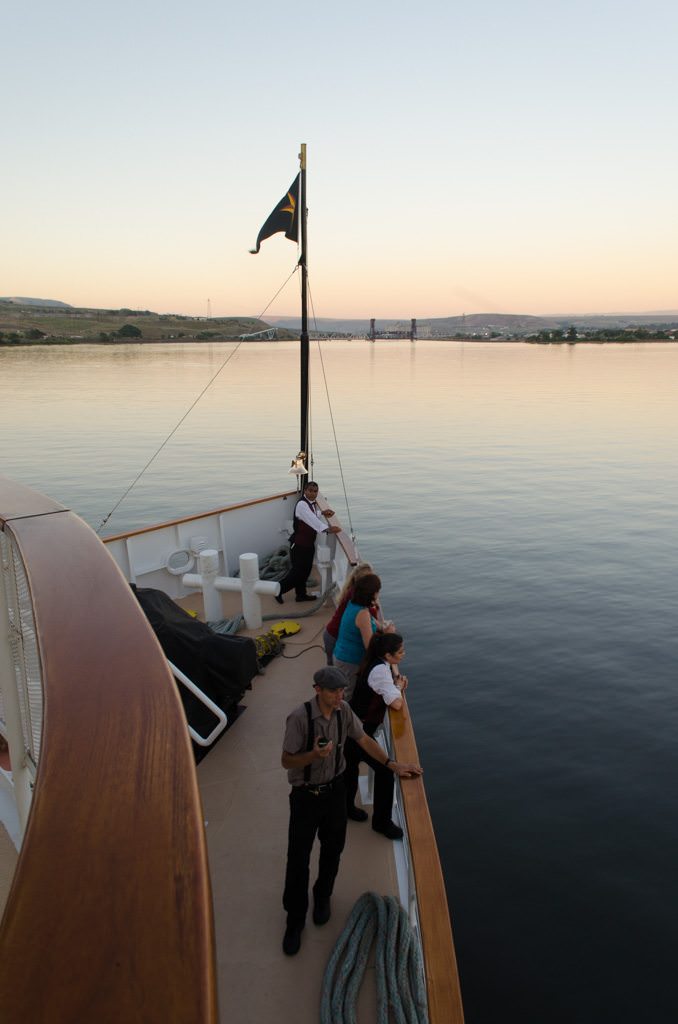 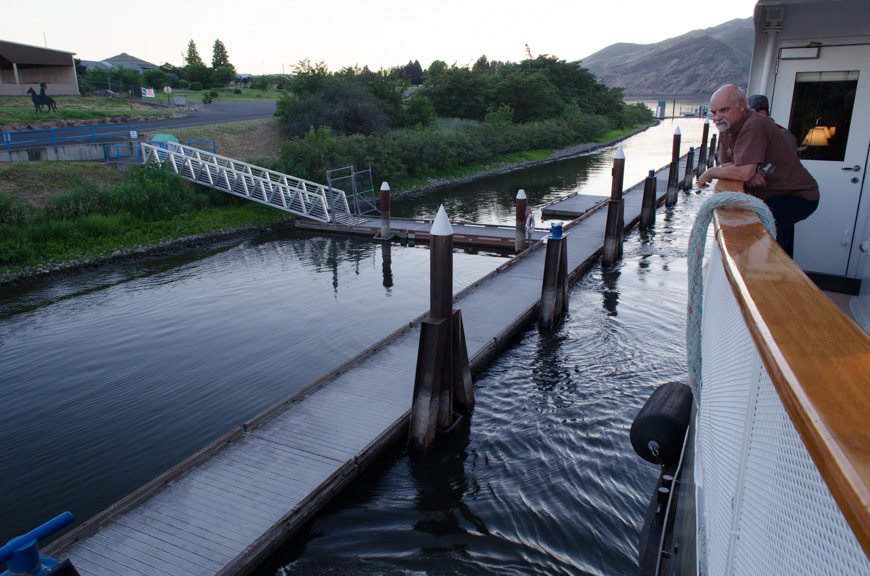 Also unlucky was John Day. Park the weakest group that straggled behind the main group during the harsh winter in Hell’s Canyon, Day ended up being captured by the local Indians, robbed of all his possessions, stripped naked, and sent into the wilderness where only by dumb luck did he re-encounter his fellow “Astorians” months later. The incident so traumatized Day that when, on the return overland journey less than a year later, he tried to kill himself by putting two pistols to his head and simultaneously pulling the triggers. Both missed.

His reward? A river and a town in Oregon are both named after him. 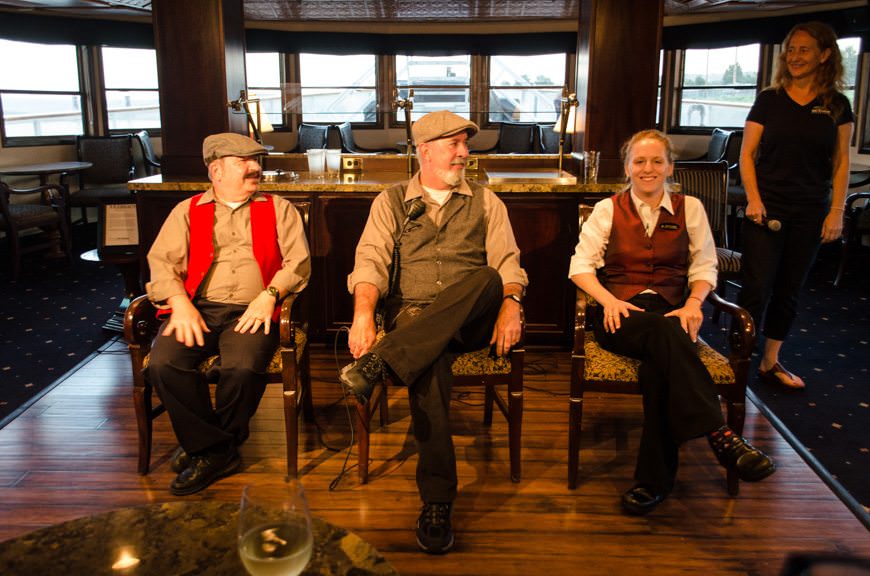 The crew of the S.S. Legacy entertains guests with a version of The Liar’s Club. Hint: the liar is the one you’d least suspect! Photo © 2015 Aaron Saunders

Though the overland party reached Astoria in February of 1812, more problems arose. Aboard the Tonquin on a quick run north from Astoria to buy furs, Captain Thorn had managed to royally piss off the local Clayoquot First Nations off what is present-day Vancouver Island, British Columbia. The Clayoquot attacked and killed Thorn, along with most of the remaining crew aboard the Tonquin. One or two crew members managed to survive and lured the local natives out to the ship the following day, where they detonated the explosives in the hold, killing hundreds of Clayoquot Indians. Recently, Tonquin’s anchor was found in the exact spot where First Nations stories had indicated the ship had gone down.

By November of 1812, the word had reached the Astorians that the United States and Britain were at war. When spring came, the Partners agreed that they should abandon the settlement. Collectively, they’d all stared down death on a nearly daily basis just trying to reach Astoria, and now word arrived that gun ships from Britain were on their way to claim the burgeoning colony for England. Wilson Prince Hunt was enraged but unable to persuade his companions to stay. Hunt’s connections to the endeavour were, at this point, pretty tenuous: he himself sailed for Tahiti not long after. When word reached John Jacob Astor in New York, the millionaire businessman reportedly went into orbit. 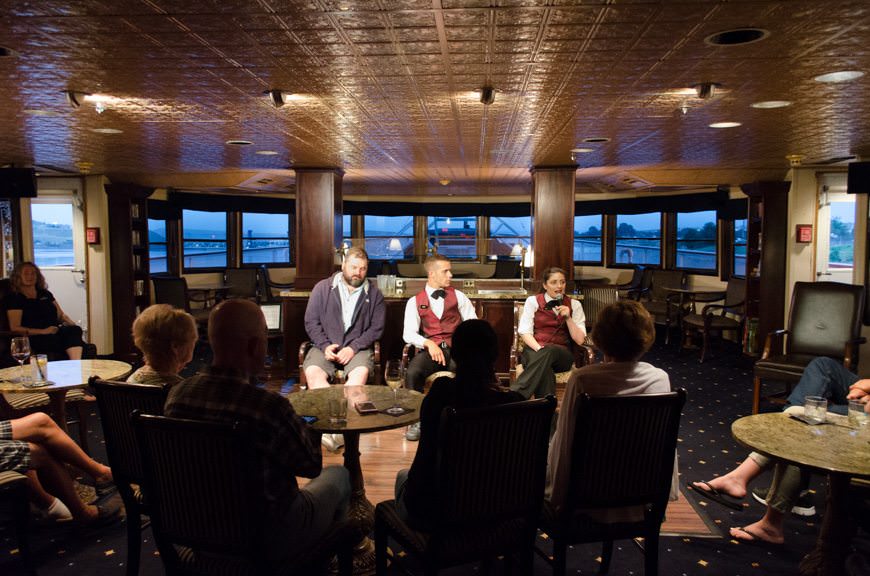 Despite this, the settlement of Astoria remains to this day, and these harrowing events (which I am truly paraphrasing here) all occurred along the Columbia and Snake Rivers. They’re described in detail in author Peter Stark’s excellent book, Astoria (2015, Ecco Paperback), which should really be a must-read for anyone headed on an Un-Cruise along these waters.

The real shame is that the story of their harrowing exploits and hardships – the likes of which many modern-day Americans will never know – has been largely forgotten. Looking out on the passing Snake River – the “Mad River” that so terrorized the Astor Overland Party – you can almost feel their ghosts echoing across the sad and lonely plains that we aboard the S.S Legacy sail through in almost obscene levels of safety and comfort, just over two hundred years later.

This evening, we passed through our last lock on our eastbound trip to Clarkston, the Lower Granite Dam, bringing us to an elevation of roughly 730 feet above sea level. My fellow guests and I drank, ate, then drank some more, as the crew of the S.S. Legacy performed a sort of “Liar’s Club” style game with us as we eased into our berth in Clarkston. Apparently there’s a Wal-Mart just over the hill within walking distance; I couldn’t care less. I was quite happy to stay onboard the ship, enjoy a nice chat, and pour myself a nightcap.

I think it’s quite telling that, despite the fact that this is only my third day aboard the S.S. Legacy, I’d already gladly repeat this trip in a heartbeat. If a river cruise line and an expedition cruise line had a love-child, it would be the S.S. Legacy: a brilliant hybrid of adventure, history, and cruising in style. 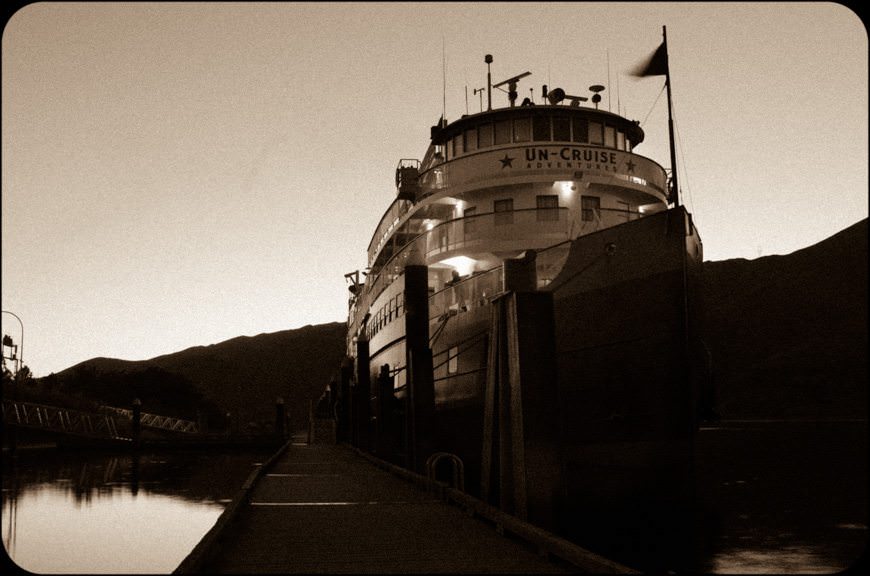 Our Live Voyage Report aboard Un-Cruise Adventures’ S.S. Legacy continues tomorrow as we explore Clarkston and Hell’s Canyon! Be sure to follow along on twitter by following @deckchairblog or the hashtag #LiveVoyageReport.