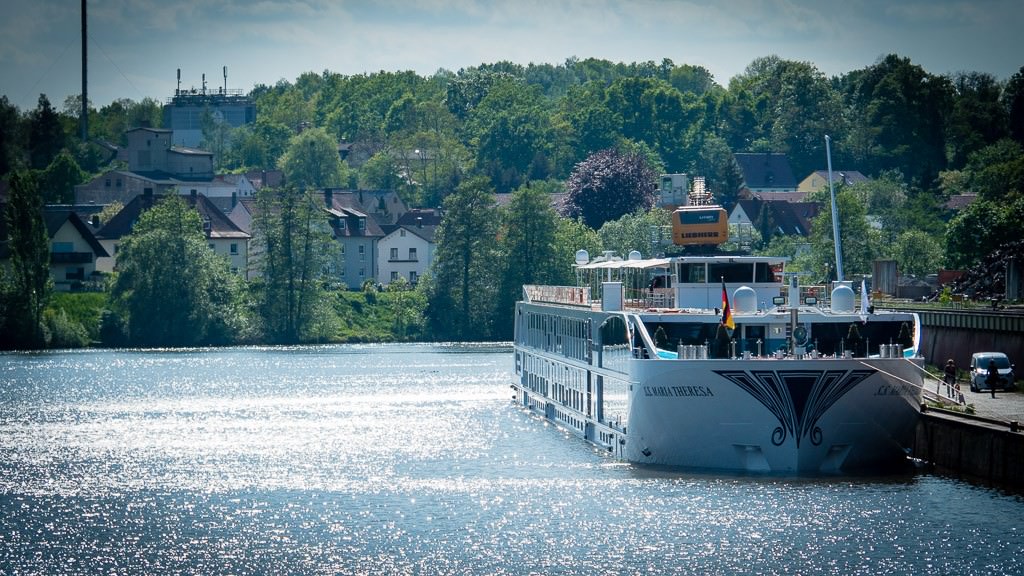 After nearly missing the ship yesterday, I awoke to a glorious morning in Bamberg, Germany. City tours were offered as well as an afternoon tour to a farm, both included in the cost of the cruise. I opted for neither, needing instead to stretch my legs and breathe in the fresh air of the Bavarian countryside. There was a remedy for what I longed for: Uniworld’s fleet of fine bicycles. 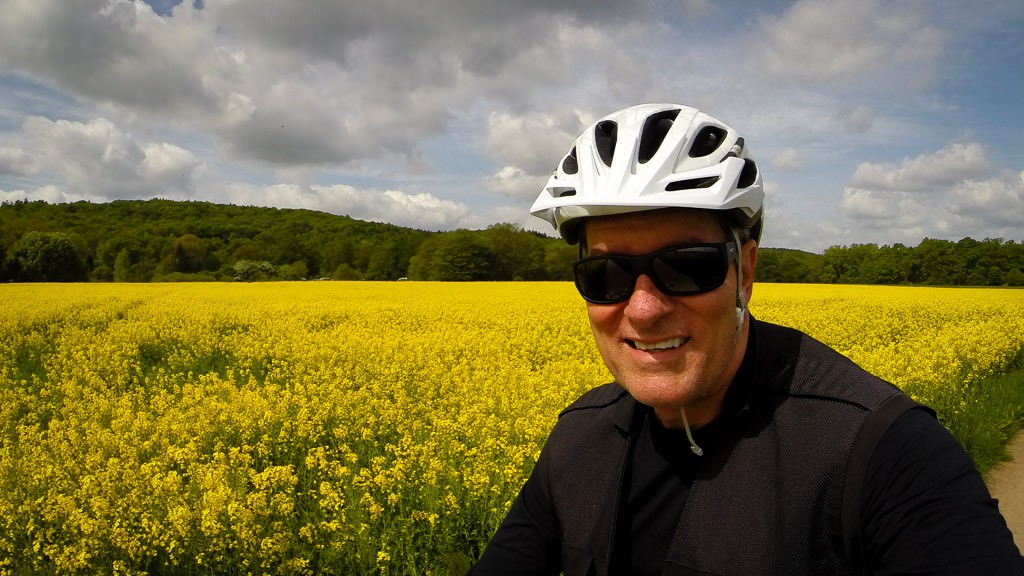 Uniworld’s bikes are some of the best, if not the best, bikes I have ridden on the rivers. The bikes have 20-inch wheels, with fat tires that can roll over cobblestone streets. With eight speeds, the bikes are good at climbing steep hills or ripping along the flat paths of the river banks. The seats and handlebars can be adjusted so that even someone 6’5″ (me) can fit comfortably. Add to that Europe’s well-thought-out bicycling infrastructure, and you have a match made in heaven, with daily opportunities to explore fairy-tale villages and beautiful countryside on two wheels.

That Uniworld has bikes raises an interesting point. All too often, river cruising is portrayed as being a passive experience for old people. That’s simply not true. River cruising (with the right companies) can be an active experience. This week on S.S. Maria Theresa, for example, there are several organized group bike trips ranging from 30 kilometers to 40 kilometers with participants ranging in age from their early 50s to early 70s. Those who aren’t using the bikes are using the gym on deck 2, with a variety of cardio machines. Others are walking laps on the sun deck or into the city centers when we’re docked. 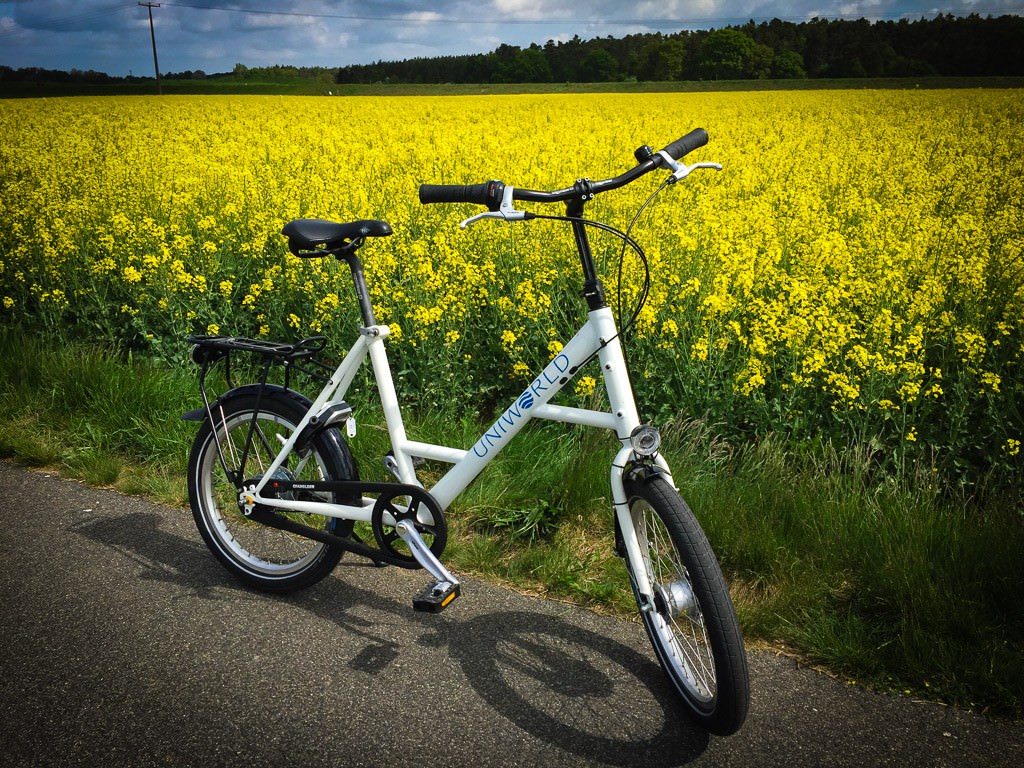 Uniworld’s bicycle are among the best I’ve ridden on the rivers. © 2015 Ralph Grizzle

If you prefer not to cycle with a group, you can go on your own. In fact, I’ve found river cruising to be a “design it yourself” travel experience.  I seldom do the organized ship tours, for example, because I have visited many of the places along the rivers during my 40 years of travel. I pedal instead — and return to S.S. Maria Theresa, my oasis of luxury.

I could hardly imagine a better way of traveling Europe. The S.S. Maria Theresa serves as my floating luxury boutique hotel, and I simply come and go as I wish — on a bike provided by Uniworld.

Cycling is a great way not only  to experience the countryside and life along the river banks but also to burn a few calories from the oh-so-delicious-and-irresistible cuisine served on S.S. Maria Theresa. One of the things I love about river cruising, in fact, is that it marries two of my favorite forms of travel, bikes and boats — and negates another of my favorite activities: eating.

Compared to ocean cruising, river cruising is often more active, I also find that river cruising is less confining. On a river cruise, you’re never more than a few meters away from the river banks, and river cruisers often dock within a few steps of the city centers. If you’re someone who enjoys being active, you can walk or pedal into town — and beyond. While walking is easy, the bikes give guests the greatest degree of flexibility. In a few hours, a semi-fit cyclist can cover 40 kilometers or more. 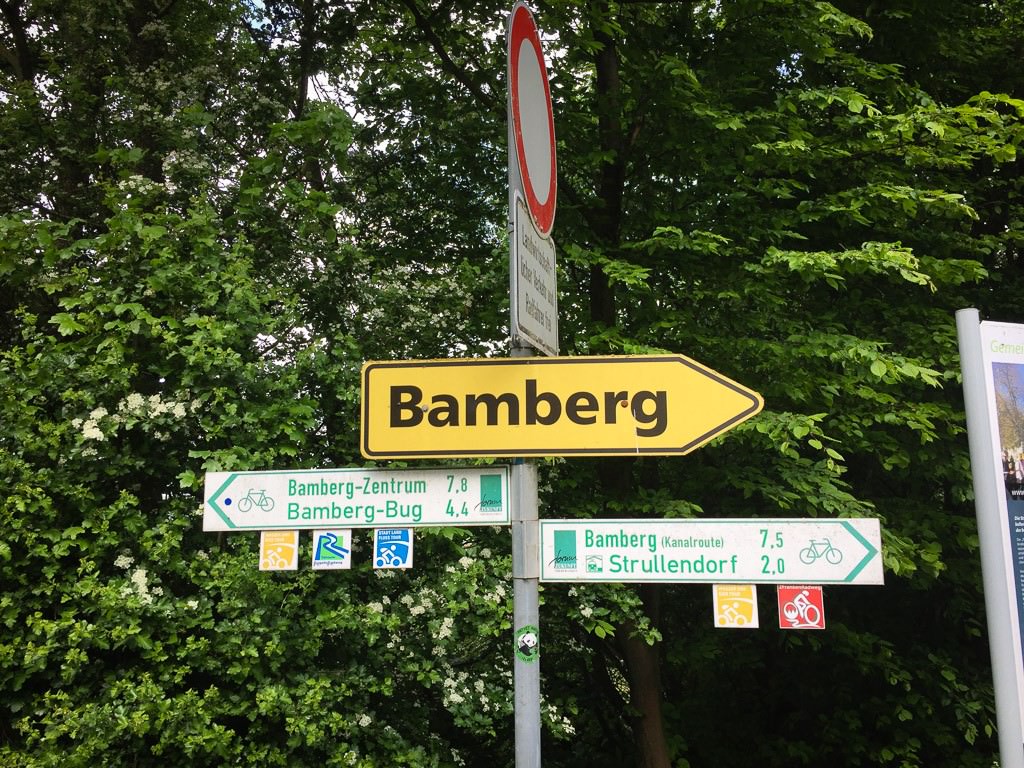 The Euphoria Of Pedaling Europe

I have quite a history of bicycling. I crossed America and Canada in my twenties, then cycled New Zealand and part of the east coast of Australia. I spent a few months cycling Europe with a childhood friend, and today, I cycle almost daily, no matter whether I am in the south of Sweden or the hills of Appalachia — or as was the case today, in Bamberg.

My launchpad for today’s ride was not emblematic of Europe — or of Bamberg. The S.S. Maria Theresa, and, in fact, all river cruisers visiting the city must dock in an industrial port more suitable for loading and unloading gravel and grain than river cruise passengers. Just a few minutes away, however, were treasures so beautiful that they caused the soul to soar. There was lovely Bamberg with its beautiful architecture and the gorgeous countryside along the Main-Danube Canal. It didn’t hurt that cotton-ball clouds were pitched against a royal blue sky. The setting was the perfect backdrop for a bike ride in this lovely region.

I pedaled along the Main-Danube Canal, through Bamberg, past leafy green trees, colorful houses and the ever-present songbirds of spring. I continued out into the countryside past daffodil-hued fields of canola on roads only for pedestrians and bikes. All who I passed were in a cheerful mood. It was a Sunday morning perfect for breathing in life. At one point, I overtook a rider making good time in front of me. I felt a slight sense of victory, as if I had just taken the lead in the Tour de France, until I saw that my competition was a nun, pedaling home from church service. If there was ever a moment that I wanted a selfie, this was it, but alas, I pedaled on, not wanting to disturb the little old lady.

For the entire morning, my feet spun the pedals, propelling me along. I felt so good that I did not want to turn around and head back to the boat. When I reluctantly did so an hour later, I became slightly lost. I must have looked puzzled when I stood standing at a pedestrian intersection studying a map, because a German man passing asked me, “Kann Ich helfe Ihnen?” I began my answer in German and apologized, “Ich habe Deutsch gelernt vor dreißig jahren in die uni.” I told him I had learned German 30 years ago in university. He replied, “Und ich habe Englisch gelernt vor sechzig jahren in the schule.” He one-upped me. He had learned English 60 years ago at school. We both laughed, and with a smile, he pointed me in the right direction, sending me pedaling away with, “Have a nice day” in broken English. For a brief moment, two strangers had connected. 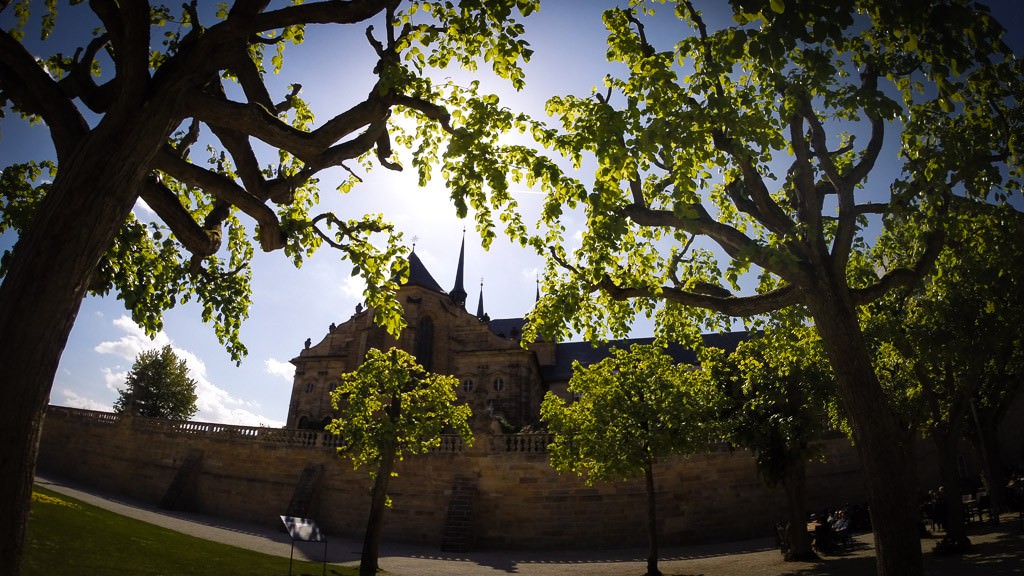 After lunch back on the ship, I pedaled into the city center to see Bamberg’s marvelous sights, including the Bamberg Cathedral. While exploring the grounds at Michaelsberg Abbey, overlooking Bamberg, I had a thought that reflected my mood: Travel, and the simple act of setting myself in motion, has time and again provided me with experiences that induce a sustained sense of euphoria. Even after nearly four decades of travel, I still feel it as sharply as I did when I first put myself in motion.

I’ve witnessed the same phenomenon in others during my life of travel. One of the most memorable events was on Holland America Line. My son and I were seated outside having breakfast. An elderly woman came over to our table and plopped her butt into a vacant chair. I thought it was rude until she offered an explanation: “It’s my first time to Alaska, and the beauty just takes my breath away.” The woman who had never ventured north of the Lower 48 explained how Alaska’s grandeur had made her feel as if she were going to faint. It touched me that someone could see such beauty in our world.

I felt a little like that today. The experience of cycling the Bavarian countryside simply took my breath away. Nothing would have made me happier — more money, a leaner waistline, more love, a kiss on the cheek from Julie Andrews (well, perhaps). I was experiencing life not in the past nor in the present, but in that very moment, a moment given to me by a bike in Bamberg, Germany, thanks to my oasis on the rivers, the S.S. Maria Theresa. 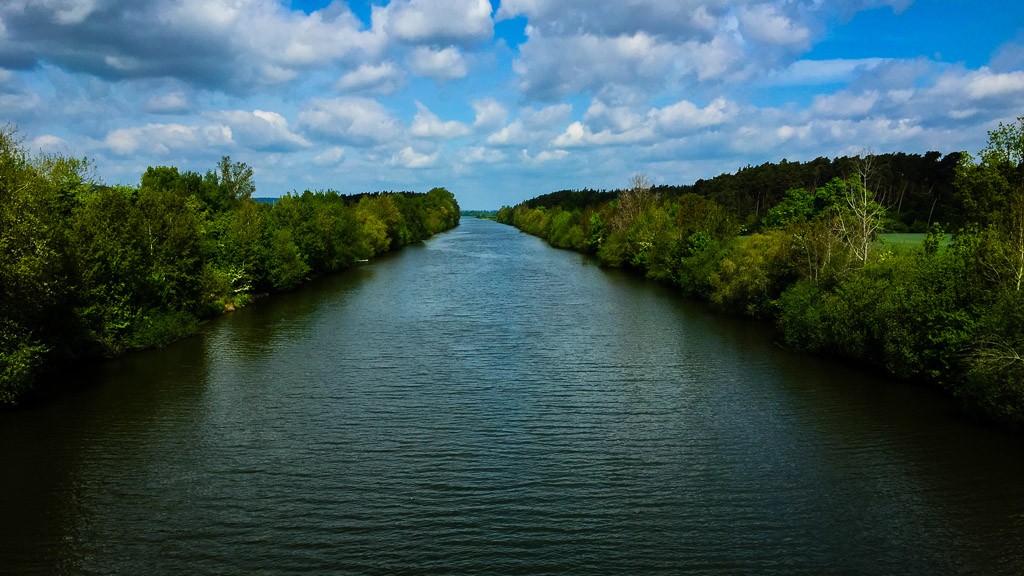 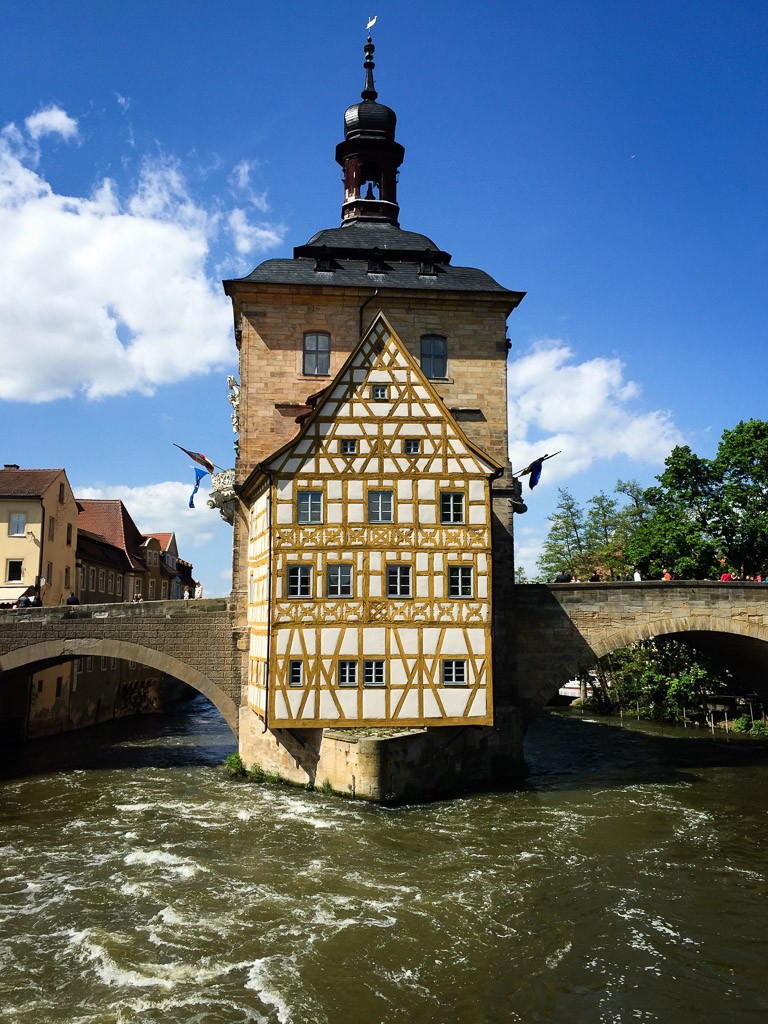 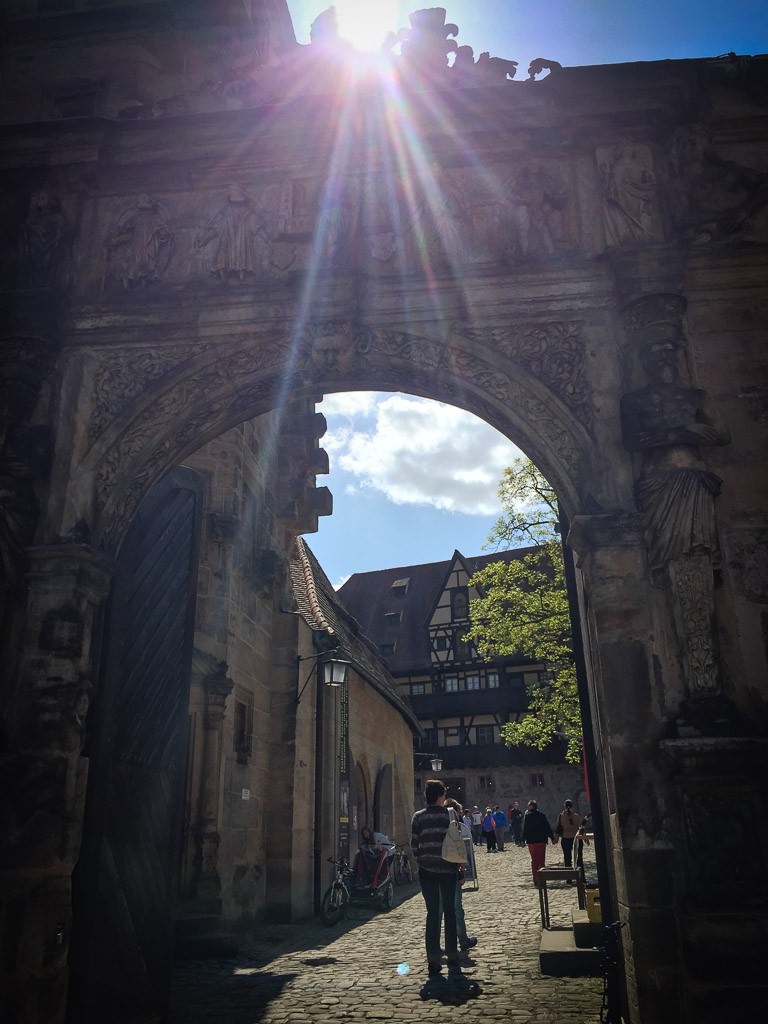 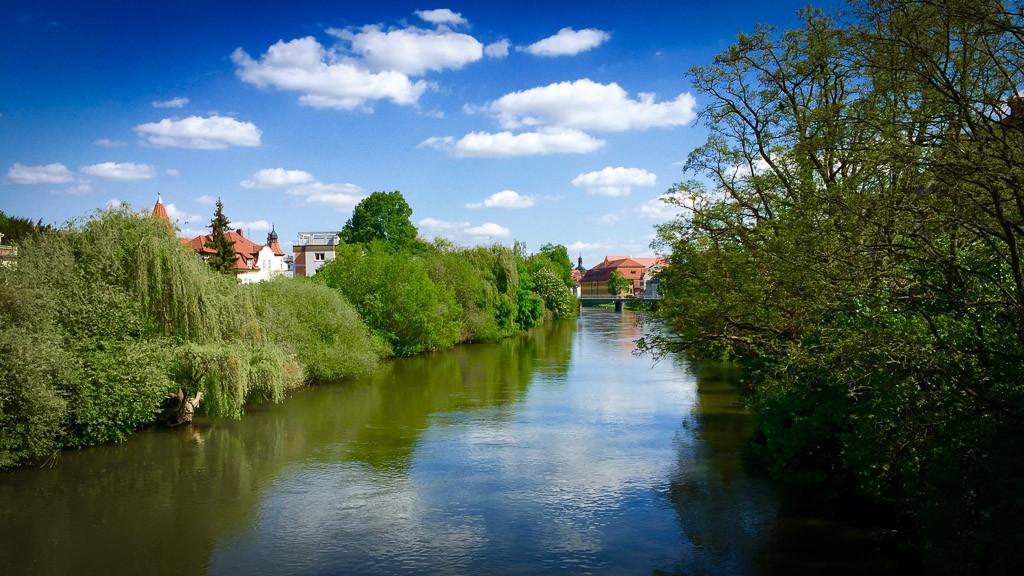 Follow my voyage as I report each day from Uniworld’s S.S. Maria Theresa here on River Cruise Advisor and on Twitter, @avidcruiser, hashtag #SSMariaTheresa

Uniworld's Maria Theresa - On The Danube