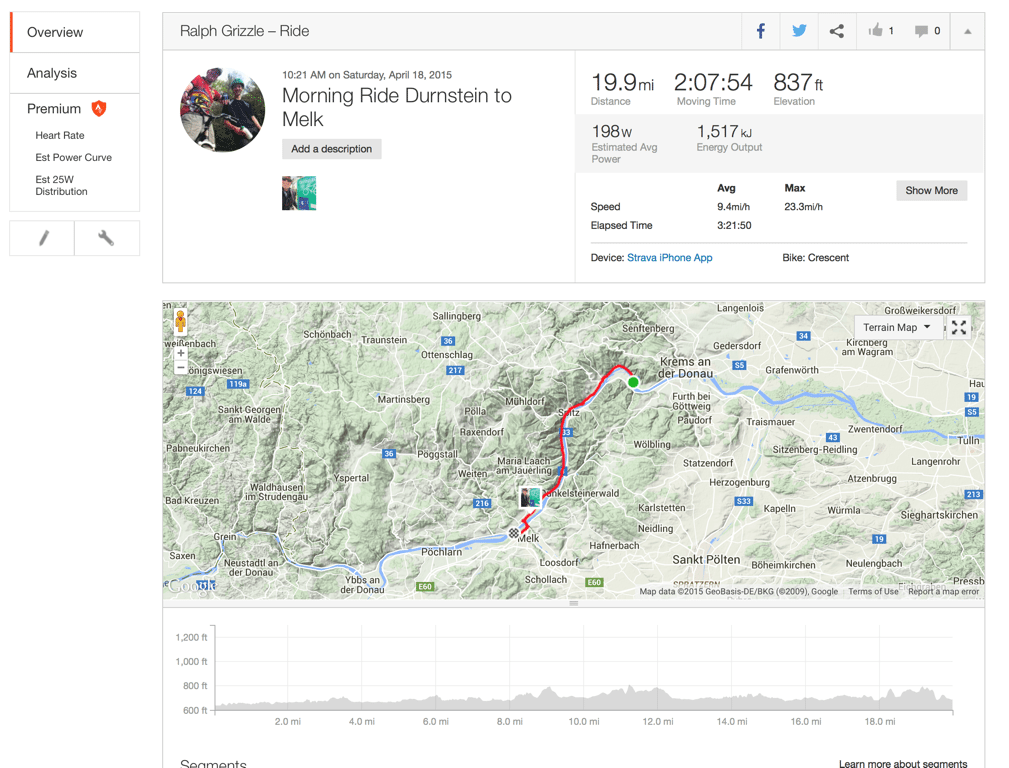 Map of our ride today from Durnstein to Melk.

I’ve heard it said that true luxury is about choice. Whether or not that’s true, I do know that as a traveler, I appreciate choice. One of the arguments against cruising, in fact, is that it can be too confining, too restrictive, too few choices, especially when it comes to river cruises. The herd is forced to follow the lollipop (the signage that the tour guide holds up to keep the group together), and the pace of the tour becomes as fast (or more often, as slow) as its lowest common denominator. I’m an active 57-year-old, and the pace of such tours often is too slow for me. 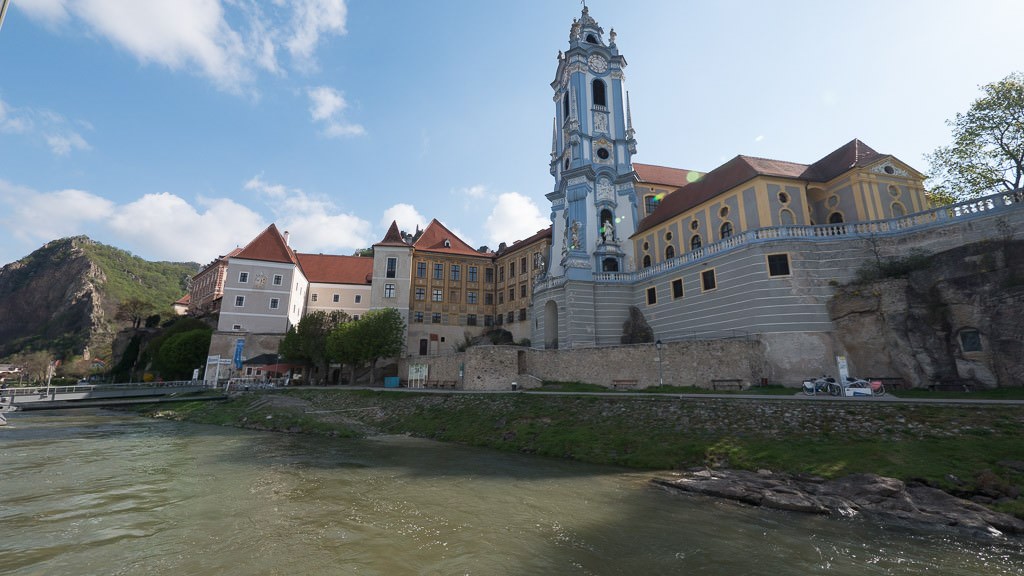 Today, our 20-mile bike ride from Durnstein to Melk was anything but slow. We weren’t breaking records, but for the 20-plus of us who pedaled, the ride was exhilarating and fun. Along the way, we stopped several times for photographs, bathroom breaks and to check out noteworthy sites. Scenic’s electric-assist bicycles made the going easy as we pedaled along mostly dedicated bike roads through the beautiful Wachau Valley, a wine-producing region in Austria. 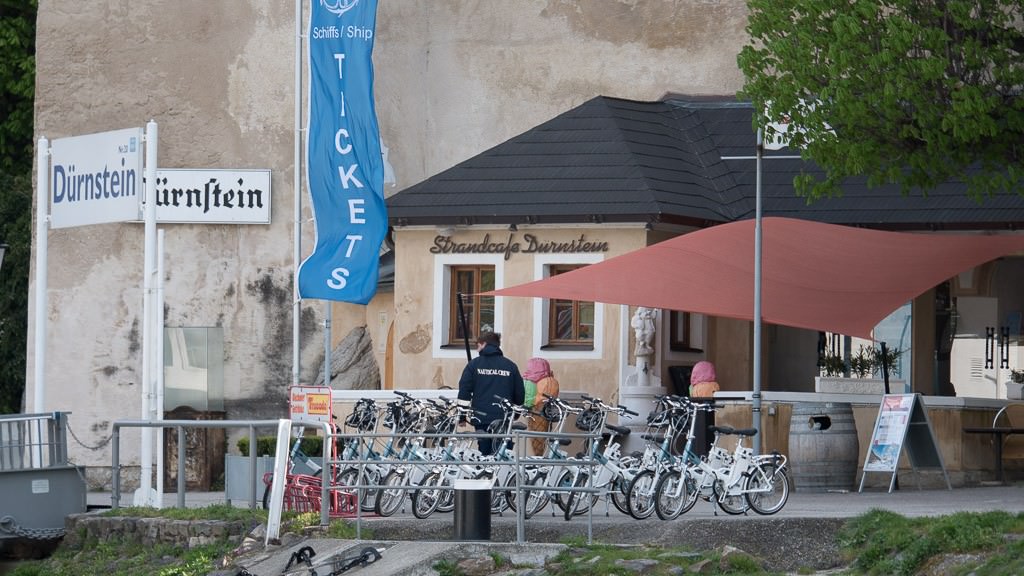 Preparing Scenic’s electric-assist bikes for a ride from Durnstein to Melk, a distance of about 20 miles along the river. © 2015 Ralph Grizzle 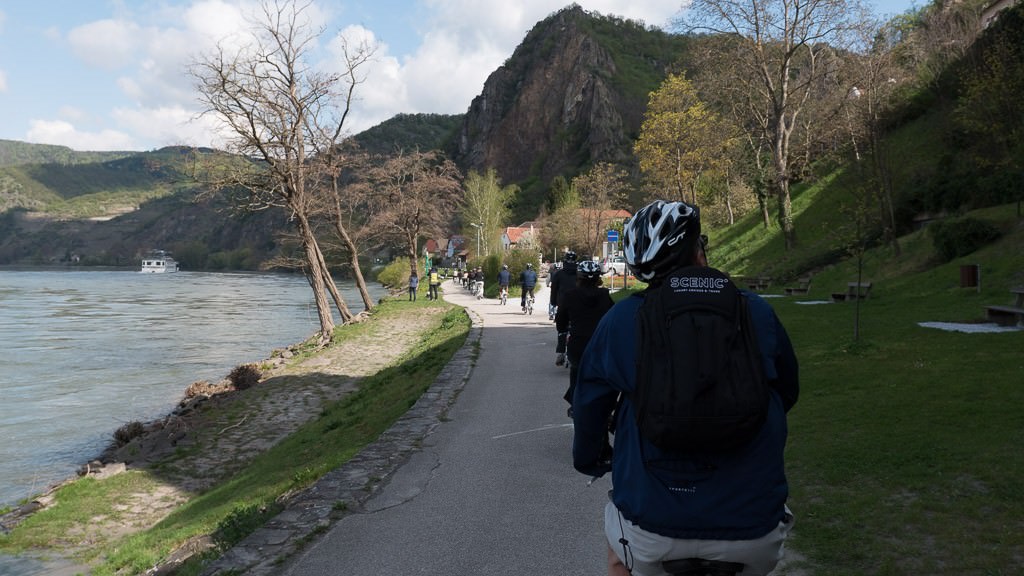 Leaving Dunstein (Scenic Jasper is ahead of us on the left). © 2015 Ralph Grizzle 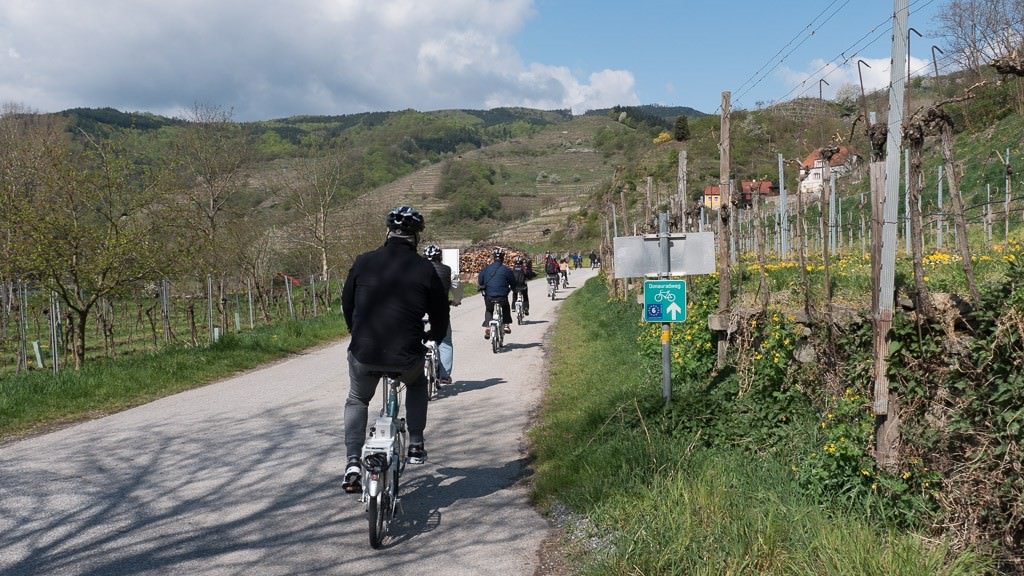 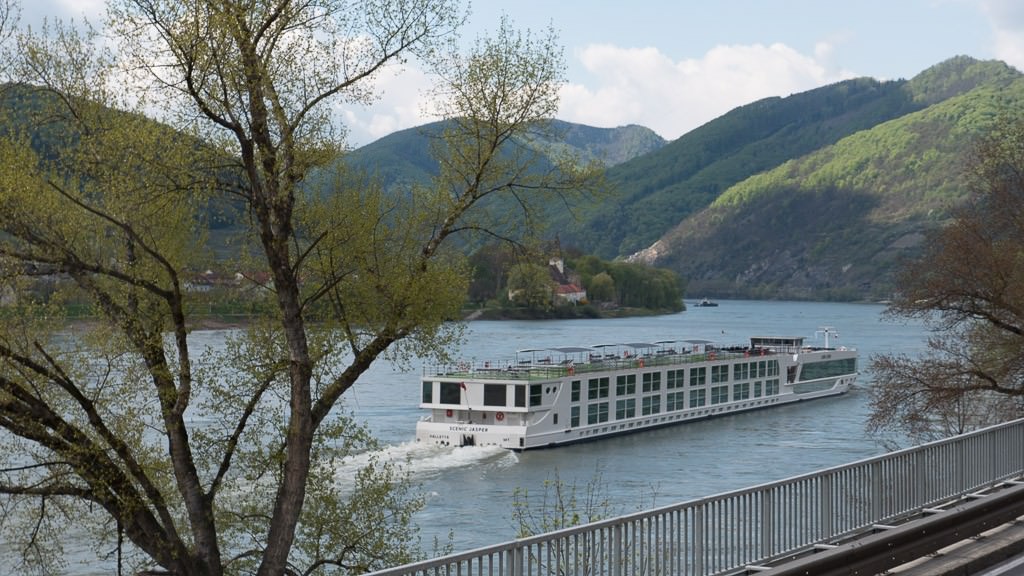 At times, we caught up with and rode alongside Scenic Jasper © 2015 Ralph Grizzle 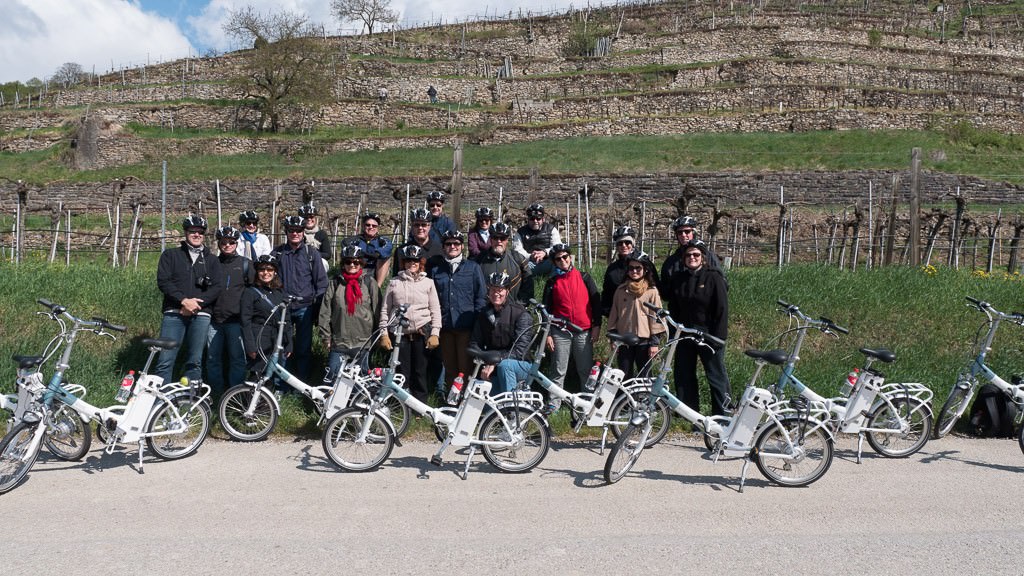 Our group of cyclists. The April weather was chilly but not cold. © 2015 Ralph Grizzle 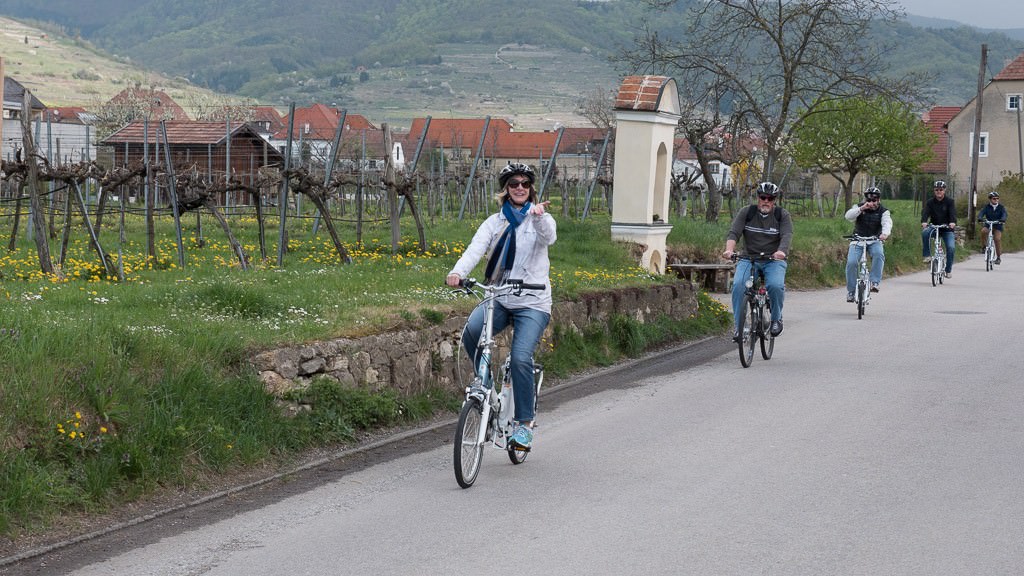 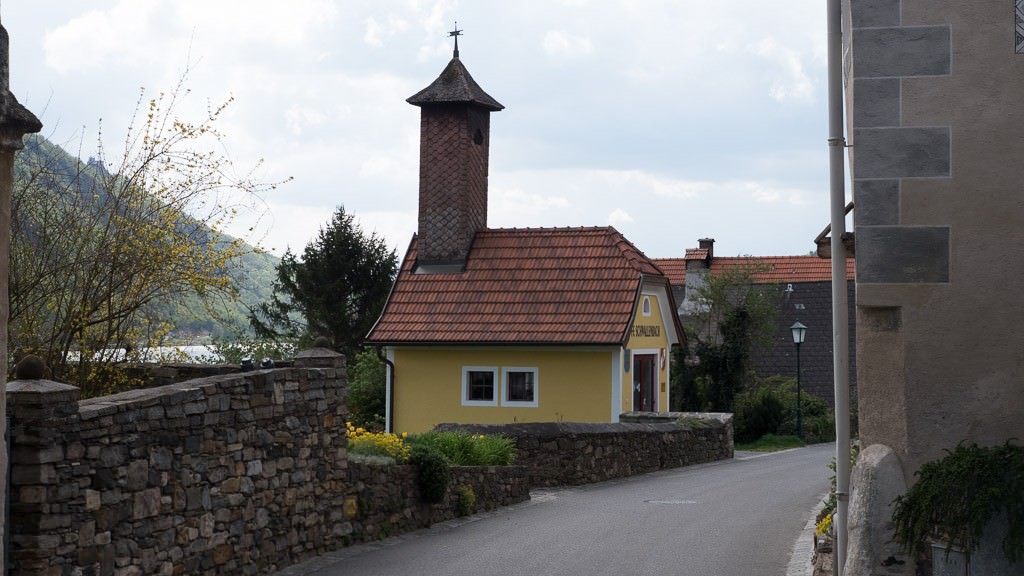 We pedaled through charming villages along the way. © 2015 Ralph Grizzle

During our ride, Scenic Jasper sailed toward Melk. We pedaled alongside her at times and at other times would lose her as we veered away from the river toward charming villages that looked as though they may have been movie sets for the “Sound of Music” (tomorrow, in fact, one Scenic tour takes guests to locations where the classic film was produced). 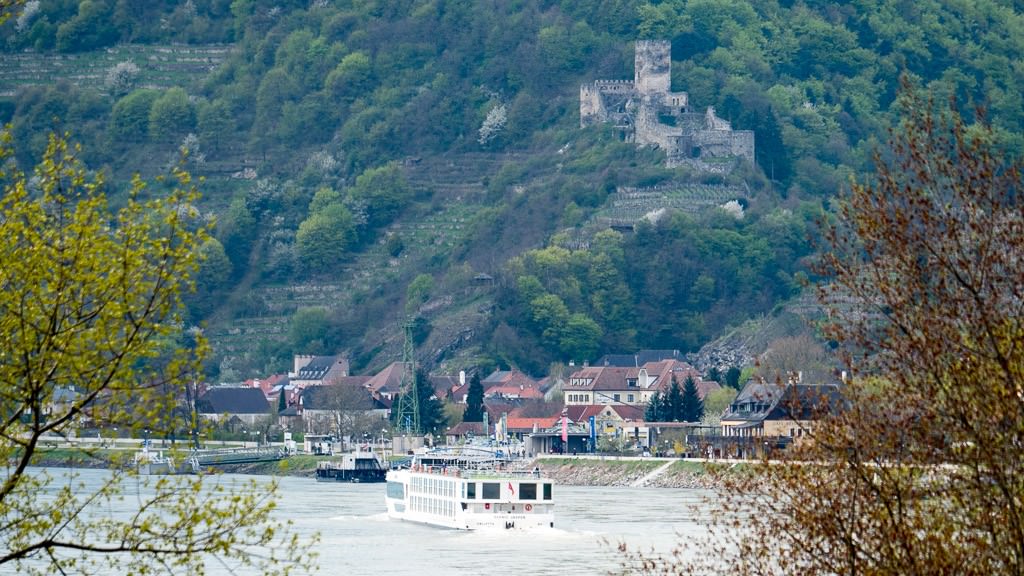 We reached Melk in a little less than three hours after we had left Durnstein. I would highly recommend this tour for anyone who is moderately active and comfortable on a bicycle. Our guides were excellent, a father-daughter pair from the Wachau region, with the daughter leading the way and the father following up at the rear to make sure that no one took an unintended detour. 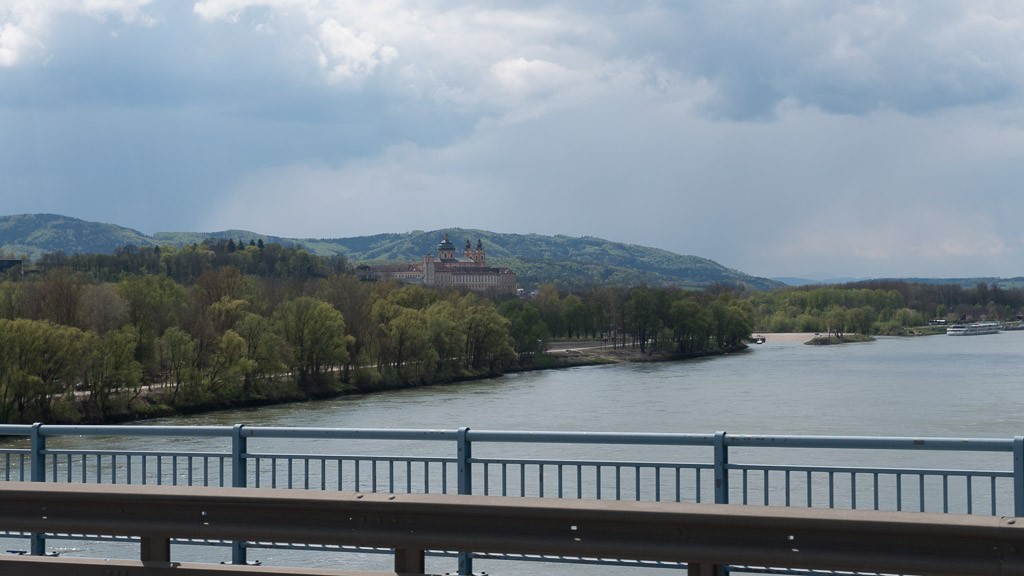 The guided bike tour was one of three tours that Scenic Jasper guests could experience today. The other tours were a visit to the Melk Abbey and afterward a Scenic Sundowner, a new program for 2015 that takes guests to a special location to toast the end of the day. Our Scenic Sundowner took us to Burgruine Aggstein, 12th-century castle ruins that sit high above the right bank of the Danube and is one of lower Austria’s most popular attractions. By coincidence, a Medieval festival was taking place at the castle on the evening we were there. 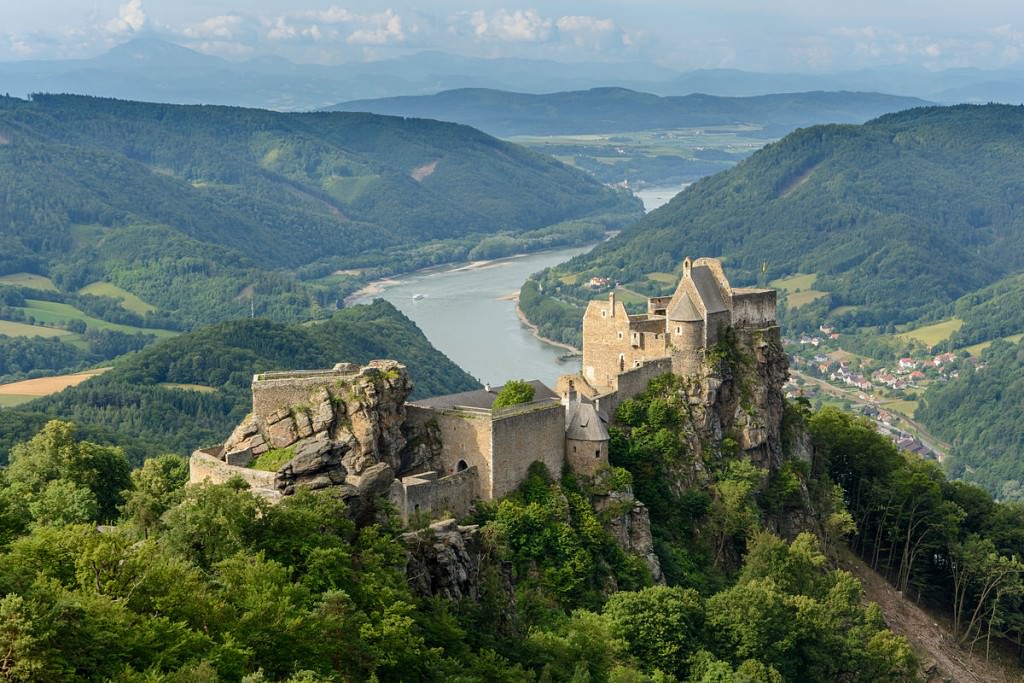 “Ruine Aggstein 02” by Uoaei1 – Own work. Licensed under CC BY-SA 3.0 at via Wikimedia Commons.

I skipped Melk Abbey. The Benedictine Abbey was built between 1702 and 1736 and sits on a rocky outcrop overlooking the town. I had been there several times, and though it’s worth seeing more than once, I chose to spend time sorting out my photos from the bike ride.

So far on this voyage, I’ve felt that I’ve had adequate choices to make the trip my own, thanks to Scenic Freechoice, a program whereby there are three or four choices of guided tours on most days. One of those choices is always a self-guided option using the Tailormade GPS system for directions and commentary. The Tailormade device fits on the bicycles or it can be hand-carried for those doing city tours on foot.

“Of course, there’s also the option of staying on the ship,” says Frank Riapos, cruise director on Scenic Jasper. “We’re often docked in some of Europe’s most interesting cities, so you can stay on board and later take a stroll into town using our Tailormade GPS systems or grab a bike to go for a guided ride.”

Once or twice per voyage there’s also Scenic Enrich, which is an “elevated experience,” Riapos says, exclusively for Scenic guests. Monday night, for example, we’ll attend a concert in Vienna. 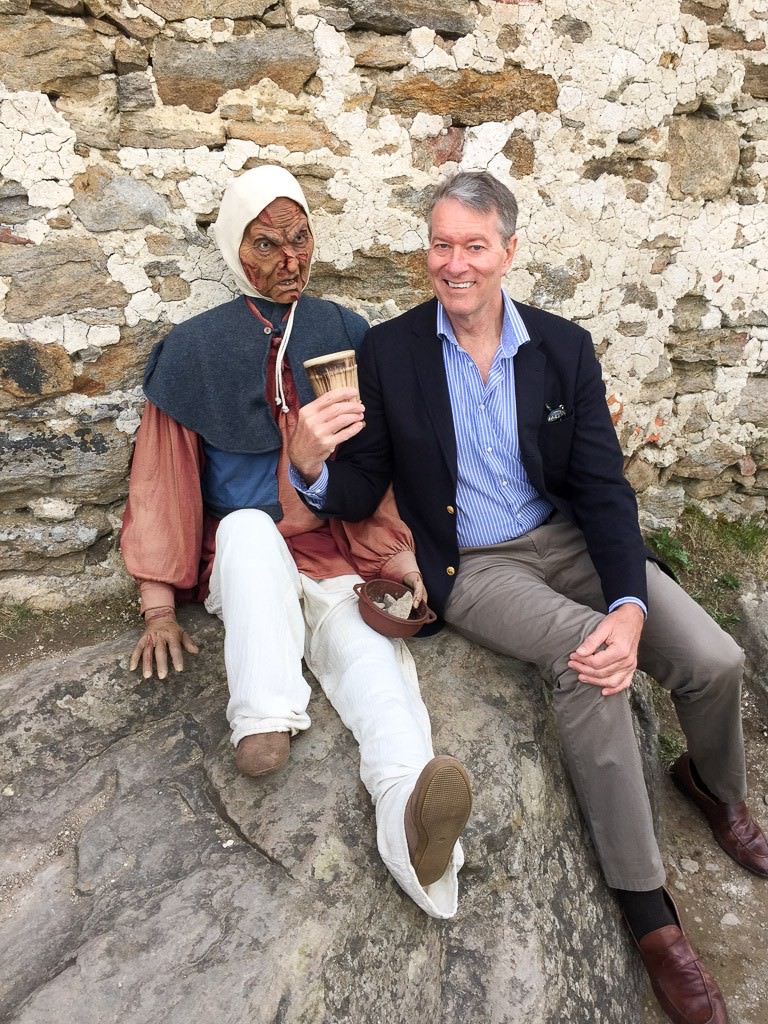 At the Scenic Sundowner, I made a new friend who looks like he’s been here for awhile. © 2015 Ralph Grizzle 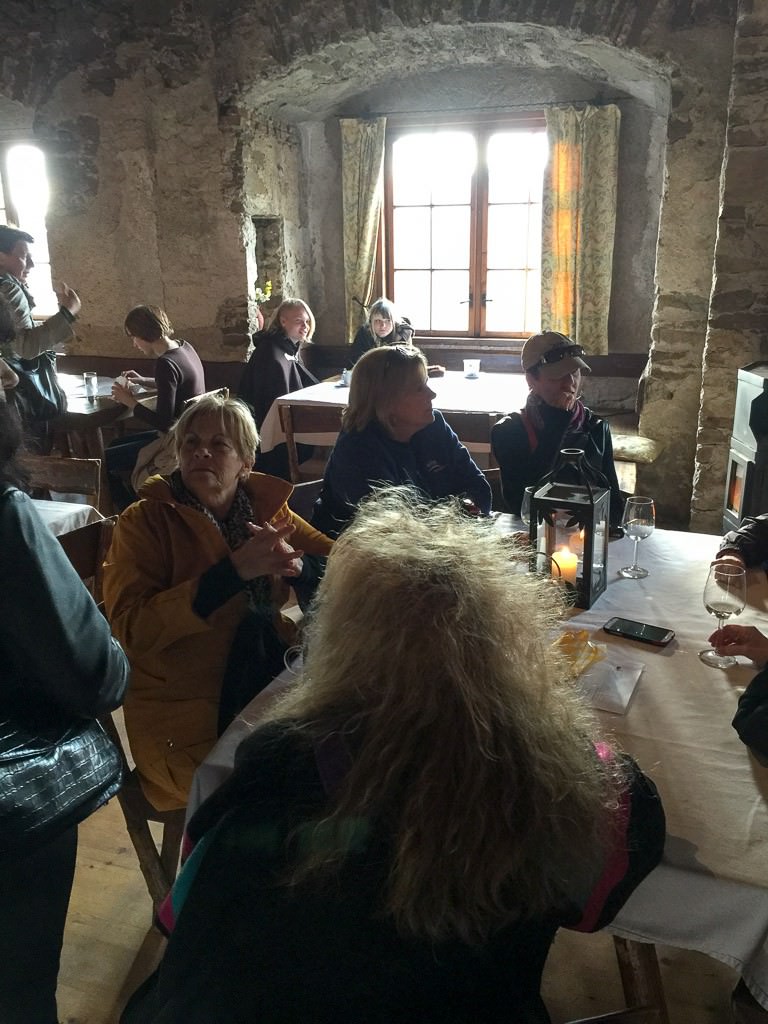 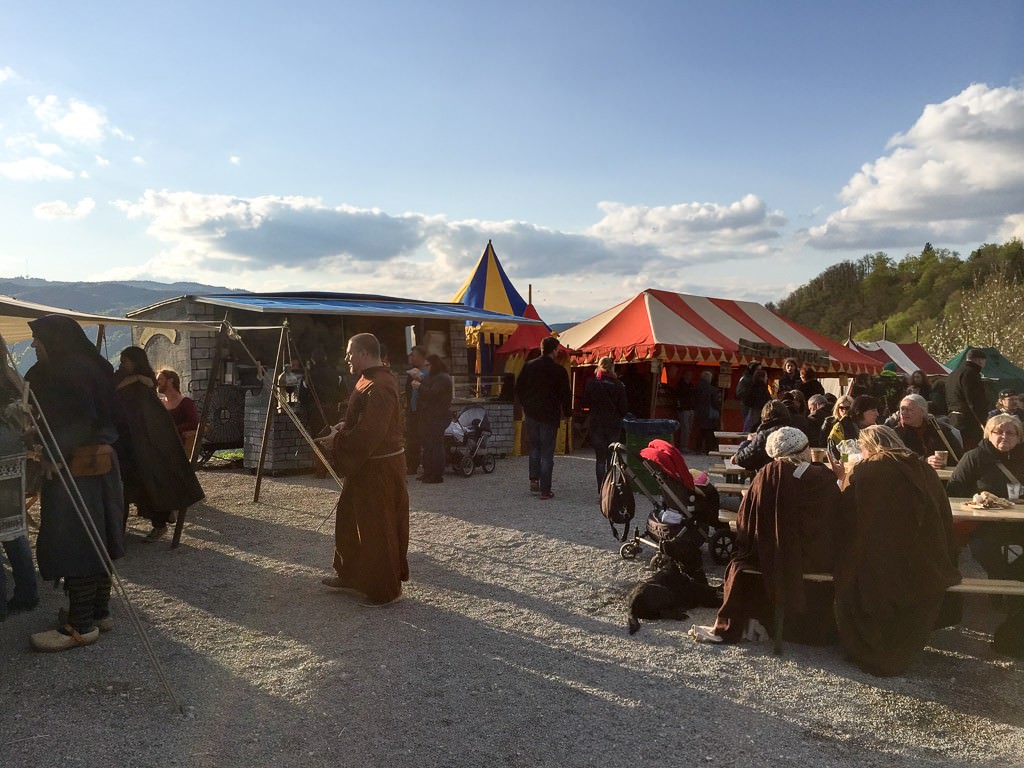 A Medieval Festival was taking place during our Scenic Sundowner. © 2015 Ralph Grizzle 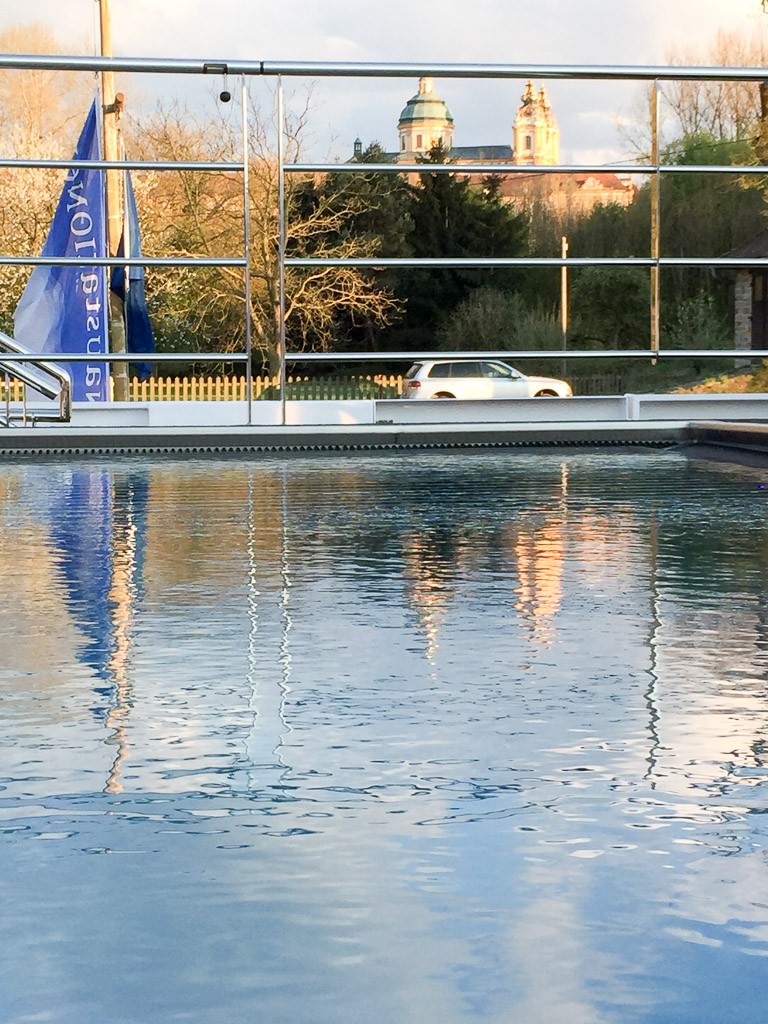 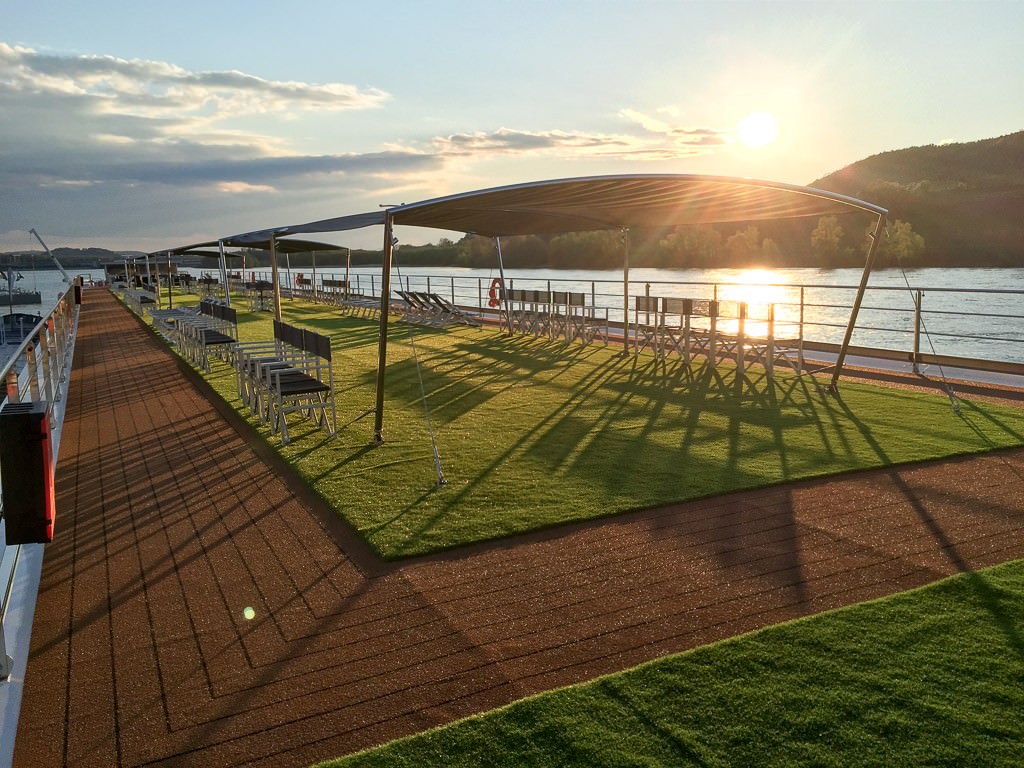 Sunset from the top deck on Scenic Jasper. © 2015 Ralph Grizzle 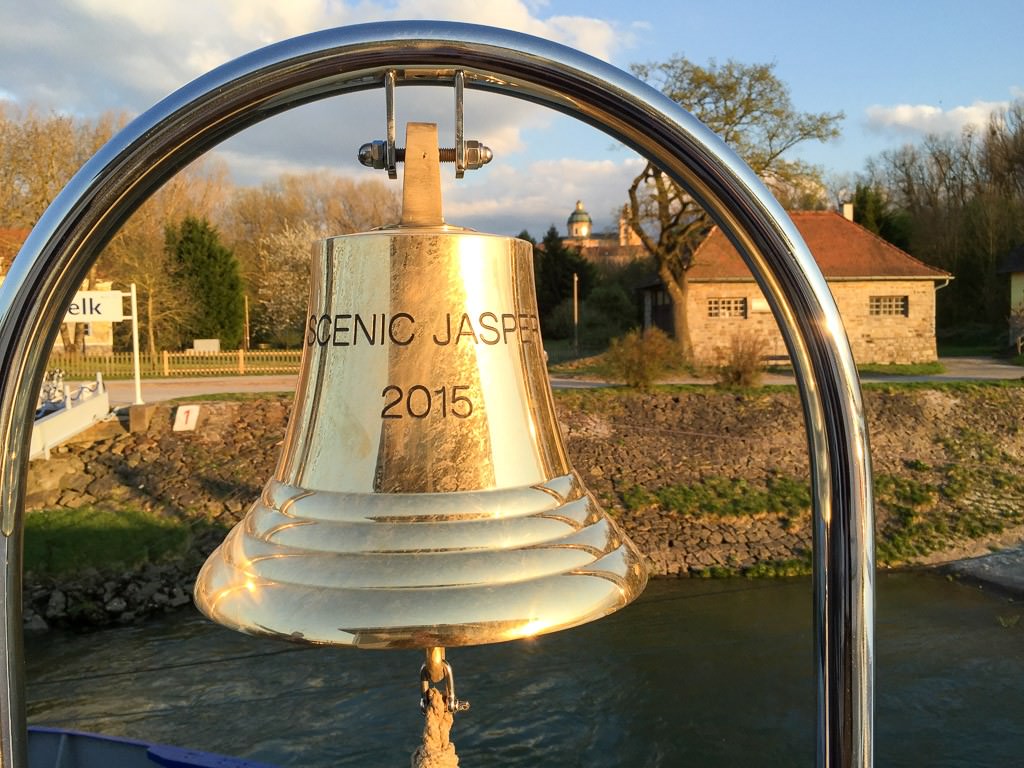 The end of a beautiful day on Scenic Jasper. © 2015 Ralph Grizzle

Get My Help With Your Scenic River Cruise