Live From Amsterdam Aboard Viking Skirnir 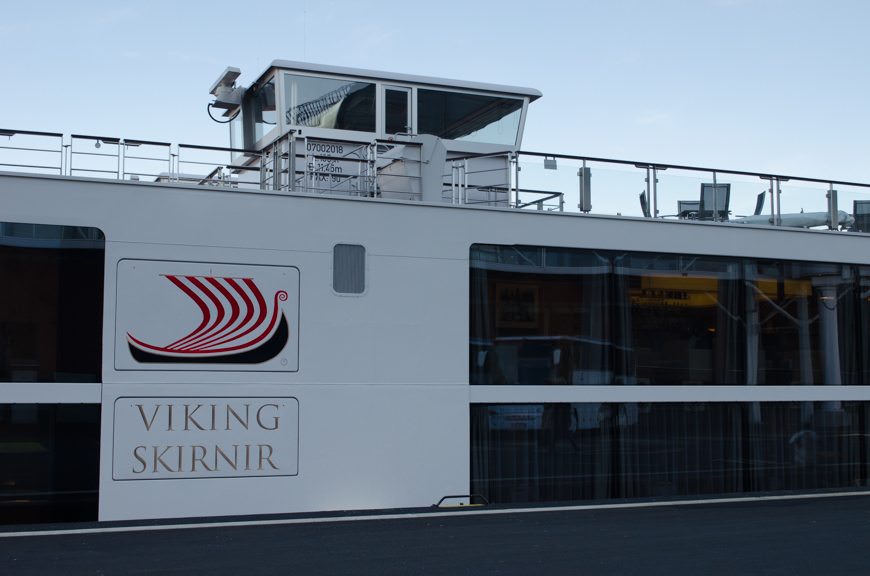 We’re here in the gorgeous Dutch capital of Amsterdam once again for an event that has become something of an annual pilgrimage for us each March: the christening of the newest Viking Longships to join the ever-expanding Viking River Cruises fleet. Our home for the next four nights: the beautiful (and brand-spankin’ new) Viking Skirnir.

This is our fourth go-round with Viking, ever since the first four humble Viking Longships were welcomed into their service career back in 2012. Over the next three years, they would go on became the most numerous river cruise ships currently sailing the waterways of Europe and in turn make Viking River Cruises both the fastest-growing and arguably most-visible river cruise line on the planet.

That’s not a knock against the competition; rather, Viking actually did the entire industry a service. Like a bolt of lightning, they thrust river cruising into the consciousness of the average traveller. Prior to 2012, river cruising was well known – sure. In fact, it had been around for decades. New river cruisers might even be surprised to learn that Viking River Cruises has been around since 1997 – the year that Hong Kong was handed back to China from the United Kingdom; Bill Clinton began his second-term Presidency; and the year when James Cameron’s Titanic was released in theatres.

Last year, I wrote that Viking had effectively become the Kleenex of river cruising. That’s an amazing marketing and branding feat: when people think “river cruising”, they now think “Viking” – even if they’ve never set foot aboard a Viking Longship.

Changes are everywhere aboard the newest generation of Viking Longships – if you know where to look. Shown here is the Viking Lounge aboard Viking Skirnir. Photo © 2015 Aaron Saunders

From the outside, Viking Skirnir looks a lot like her Longship cousins: sleek, white, and emblazoned with an improbably difficult name patterned after a Norse God. But external appearances can be deceiving; don’t think for a second that these vessels are all carbon-copies of each other. Their general arrangement plans and basic integral structure may not change from one ship to another, but the fit, finish, carpets, light fixtures, sink fixtures, shelving, power outlets, materials, headboards, doors, and even pillows sure do. 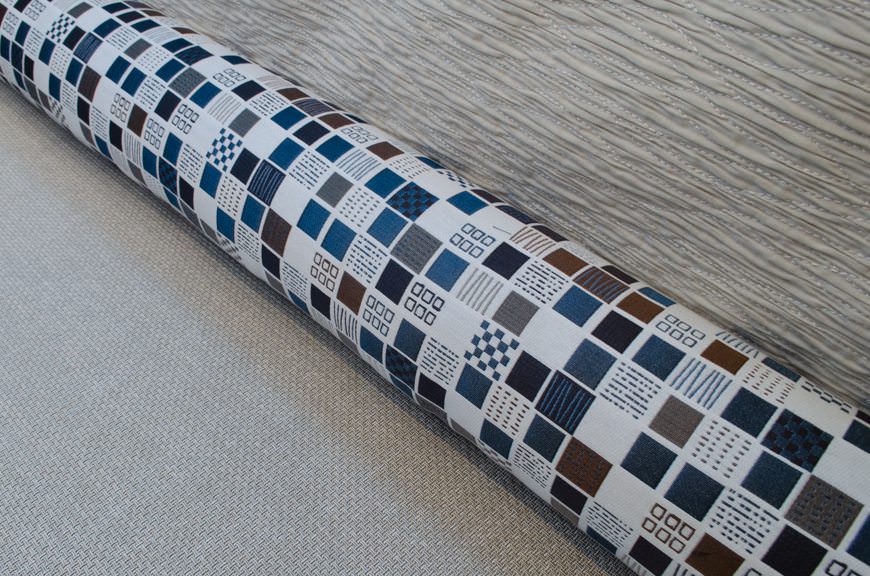 No detail has gone unnoticed on the newest batch of Viking Longships – which boast subtly updated colours. Photo © 2015 Aaron Saunders 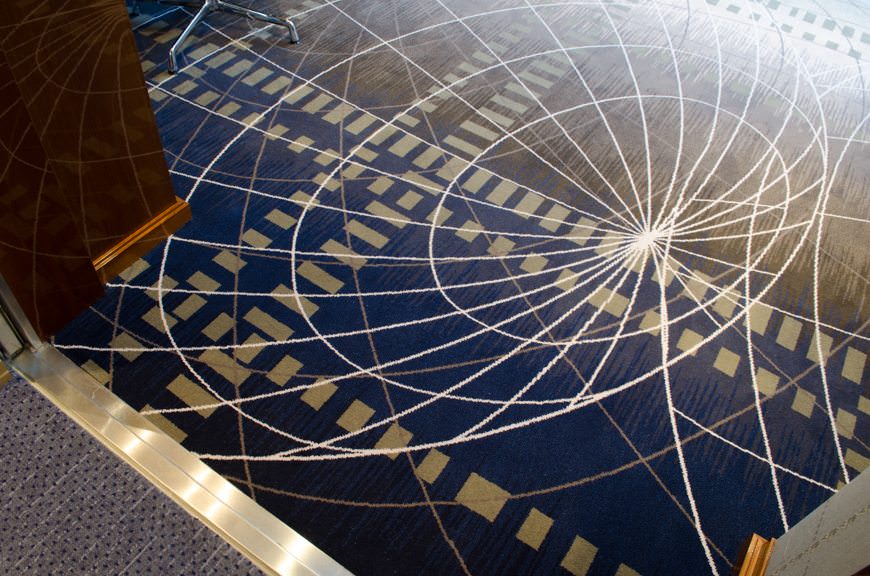 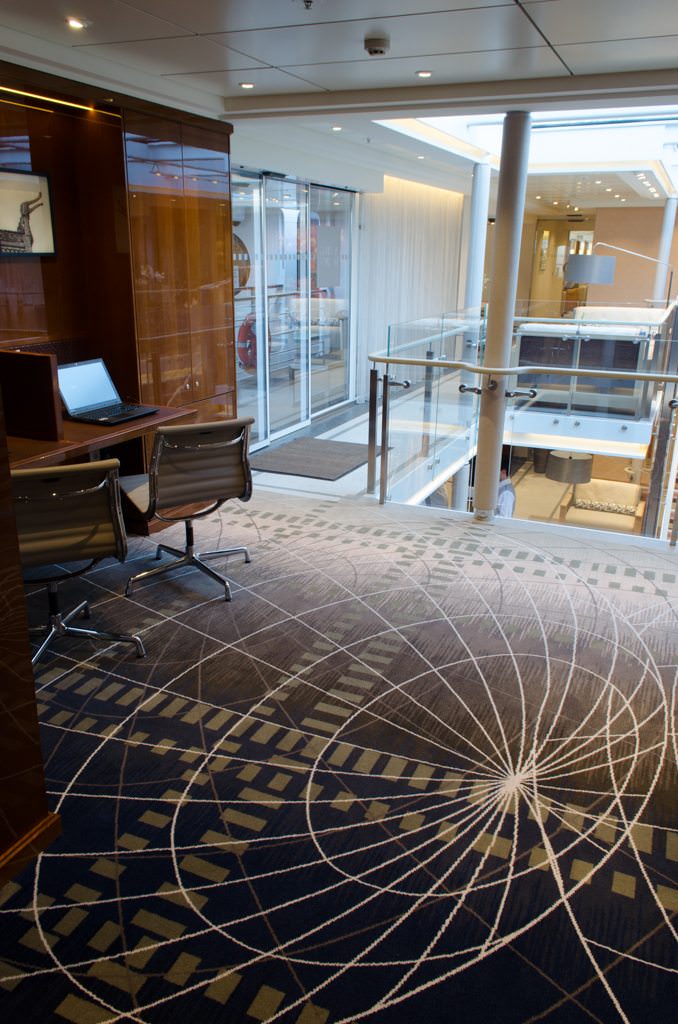 …outside the Library and Internet Center on Deck 3. Photo © 2015 Aaron Saunders

Subtly, almost imperceptibly, Viking has made these changes over a generation of Longships. Together with their shipbuilding partners at Neptun Werft in Rostock and Meyer Werft in Papenburg, Germany, Viking has created another 10 impressively designed vessels for the waterways of Europe – and we’re here to officially welcome them in to the world.

They’re still as technologically-advanced as ever. When the Viking Longships set sail, you barely feel them move. Vibration is nearly imperceptible thanks to special hybrid engines that drive four economically-friendly Schottel STP-200 azimuthing propellers mounted under the stern. Even those guests residing in the spacious (and unmatched) Explorer Suites at the ship’s stern will cruise along in comfort. 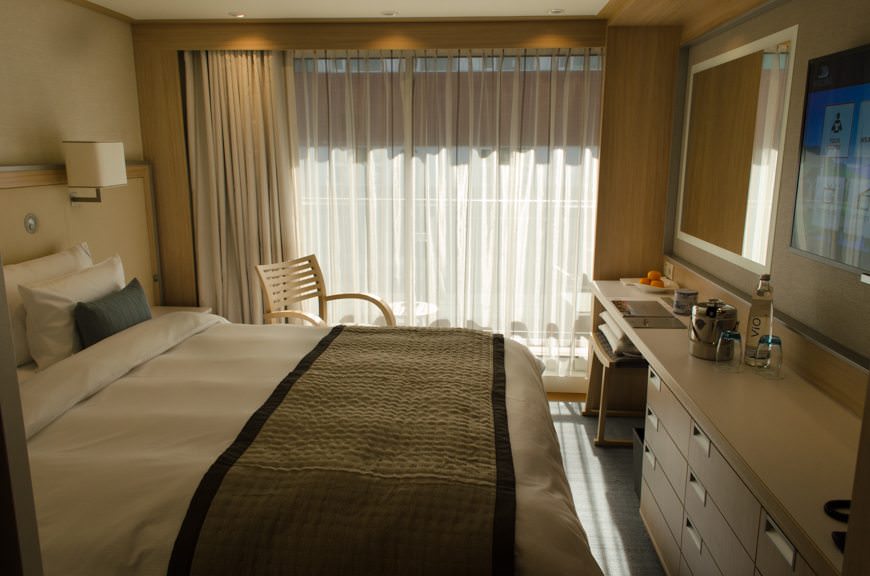 My home for the next four nights: a Category A Balcony Stateroom on Deck 3. Photo © 2015 Aaron Saunders

In my Category A Veranda Stateroom, little has been overlooked in terms of creature comforts. At 205 square feet, each Category A Veranda includes a full Queen-sized bed that can be split into twins; floor-to-ceiling sliding glass doors with a step-out veranda, two chairs and a small table; L’Occitane toiletries; and a 40-inch Sony flat-panel television hooked up to what is my favorite interactive media-on-demand system afloat. 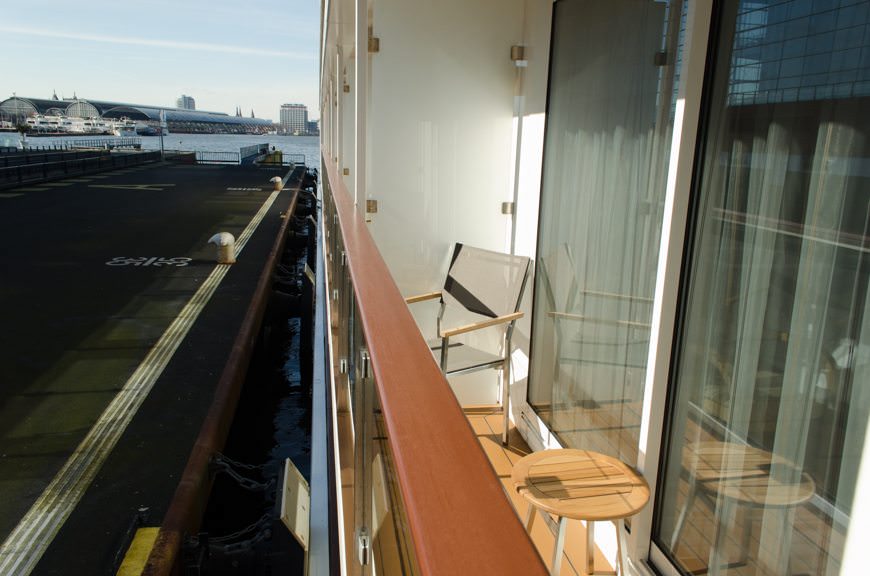 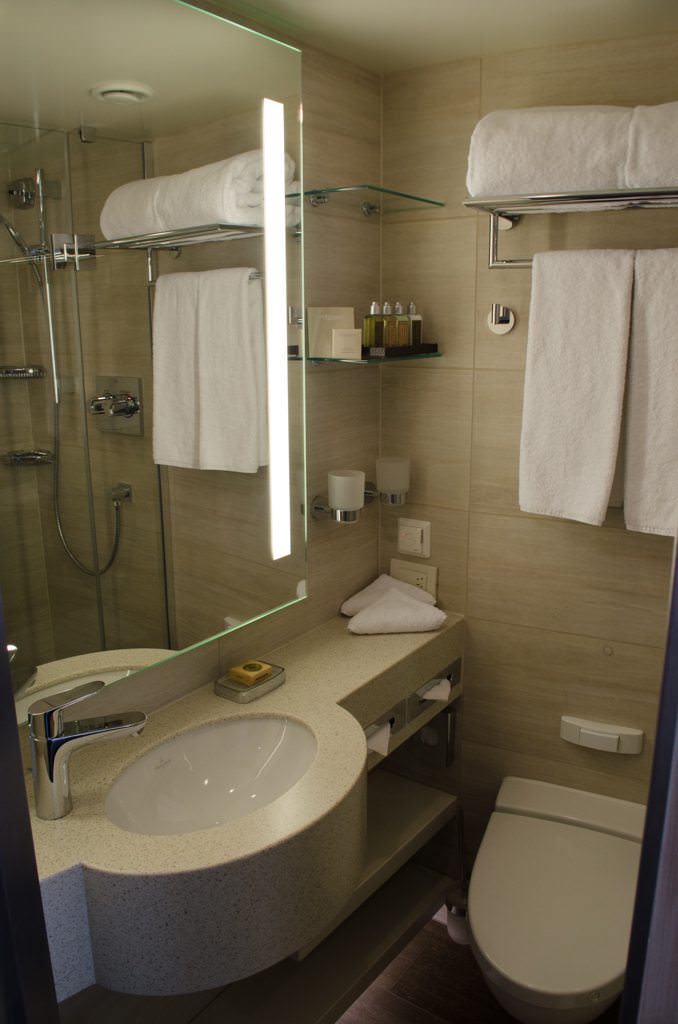 My stateroom bathroom aboard Viking Skirnir. Bathroom design and layout is common across all categories aboard each Viking Longship. Photo © 2015 Aaron Saunders 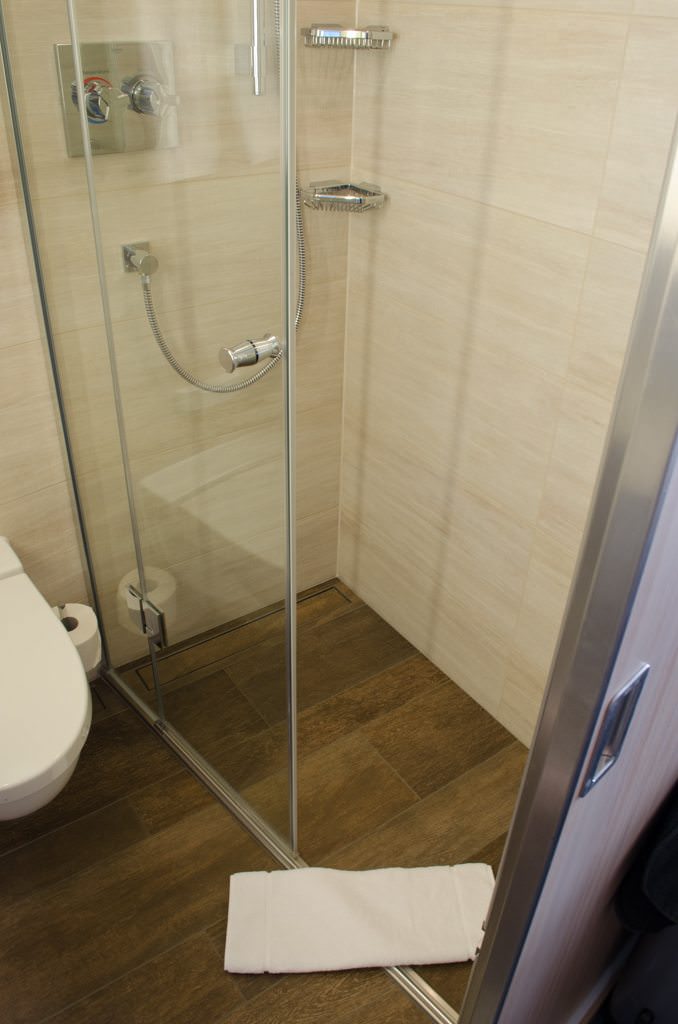 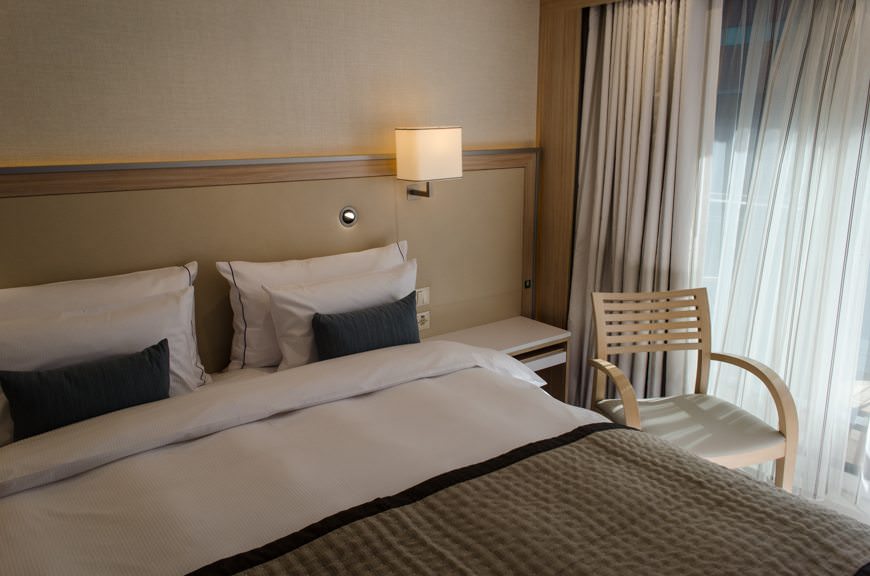 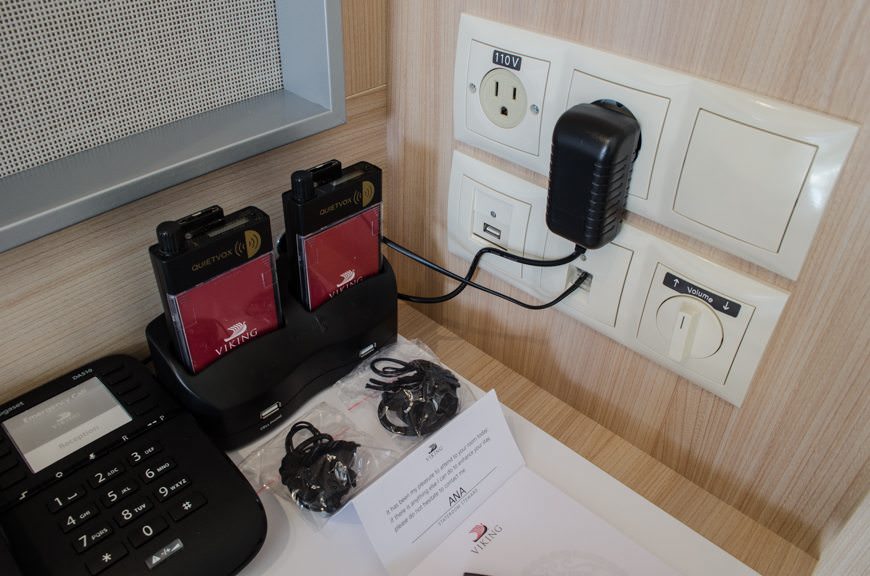 …and are loaded with unexpected conveniences. Note the US, European and USB electric ports on the wall. Photo © 2015 Aaron Saunders

These rooms are also identical to the Category B Veranda staterooms in all but physical location on the ship. If you’re not particular about which deck you’re on, these can shave some money off of your overall fare without reducing any of your space or amenities.

Of course, you could argue that the smartest guests onboard are those that book the Standard Category E and F Riverview staterooms, and you might be right. The most economical accommodations onboard, guests in these rooms get to enjoy the same experience in Europe as those in the larger staterooms and suites, for a fraction of the cost.

Some photos from around this gorgeous new ship: 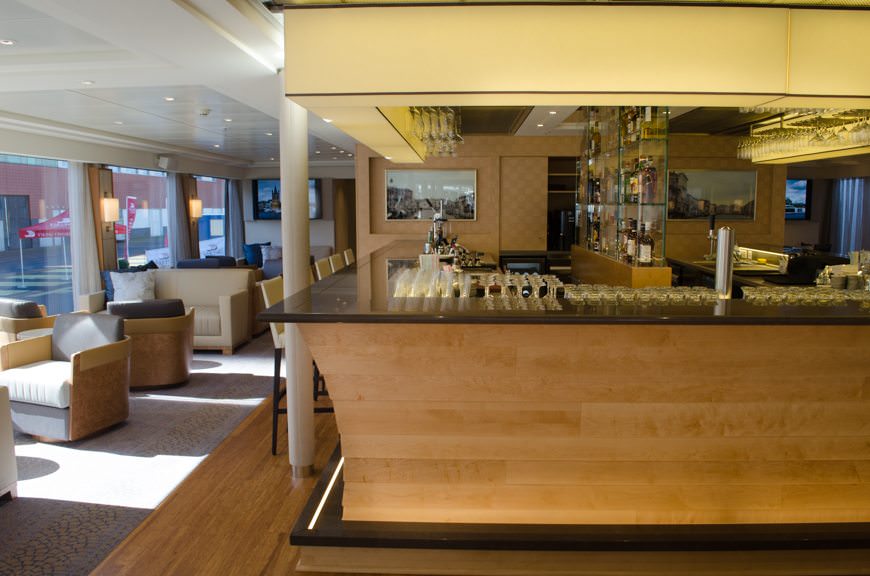 The Viking Lounge; Viking Skirnir. Note the removal of the (formerly) distracting TV’s that used to be at the end of the bar. Photo © 2015 Aaron Saunders 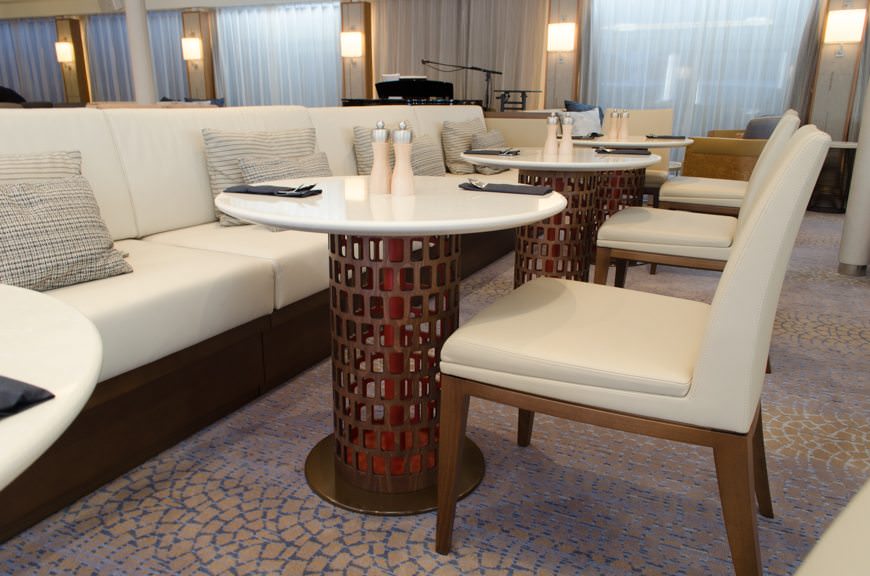 Slight variation in the design of the tables and couches in the Viking Lounge. Photo © 2015 Aaron Saunders 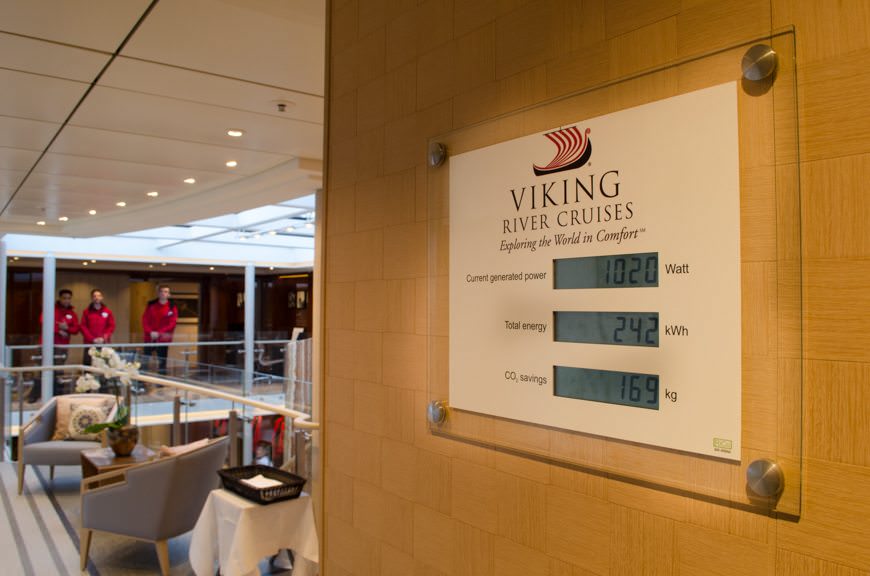 The Viking Longships are also energy-efficient. The energy useage plaque has been moved from a hidden spot on the Deck 3 corridor to a new, more prominent home on the starboard entrance to the Viking Lounge. Photo © 2015 Aaron Saunders 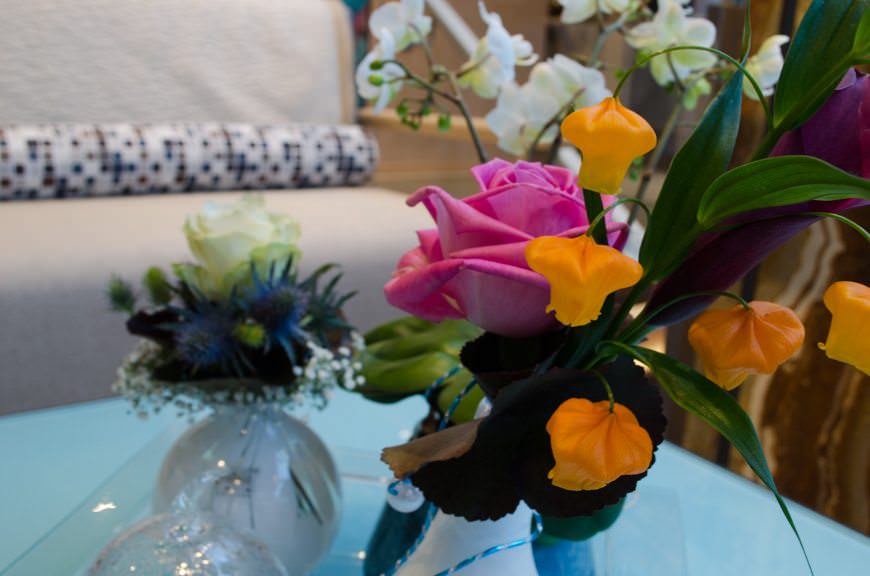 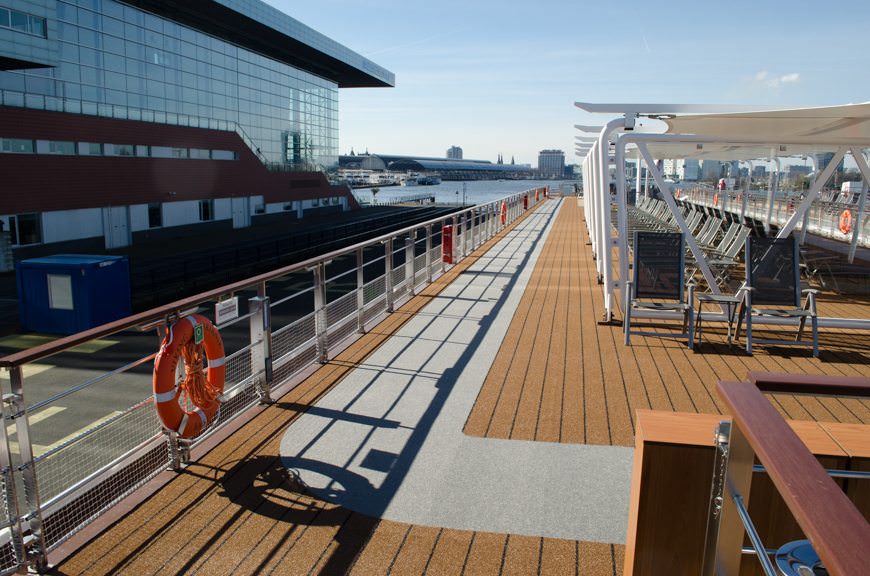 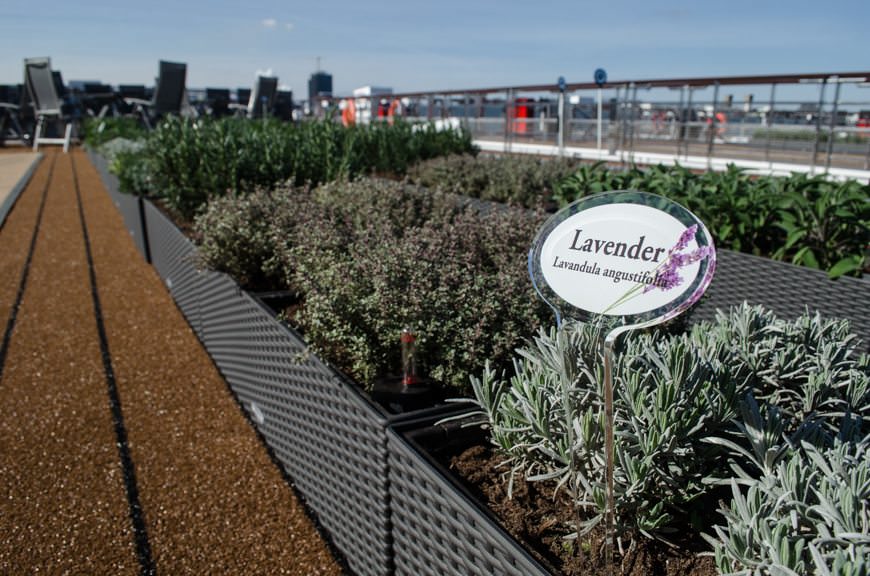 …Viking Skirnir even has her own herb garden! Photo © 2015 Aaron Saunders

Being here onboard Viking Skirnir is a bit like seeing a kid off to college: each successive Longship since 2012 has grown and matured subtly but surely. The first Longships were young, new and shy. The second round were like teenagers: confident, but still very much finding themselves. The third set, launched just last year, continued that progression. This year’s class is the product of years of experience rolled into a single polished product.

Last year, Viking broke their very own Guinness World Record when they christened 16 new Viking Longships in a period of 24 hours: nine in Amsterdam, four in Rostock, and three in Avignon, France. The first-of-its kind ceremony was subsequently certified by a Guinness World Records adjudicator as “The Most Ships Inaugurated in One Day by One Company.” Viking already held the previous record, having christened 10 new ships in one day in 2013.

This year’s ceremonies will be a little more low-key. A little more personal. Viking has nothing to prove, and everything to gain this year. It’s their race to lose. With 10 new Viking Longships, two brand-new ships on the Elbe River, successful sponsorship agreements with PBS MASTERPIECE (including the smashing Downton Abbey), and their first foray into Ocean Cruising, the Viking River Cruises machine is going full speed ahead towards a very bright future indeed. 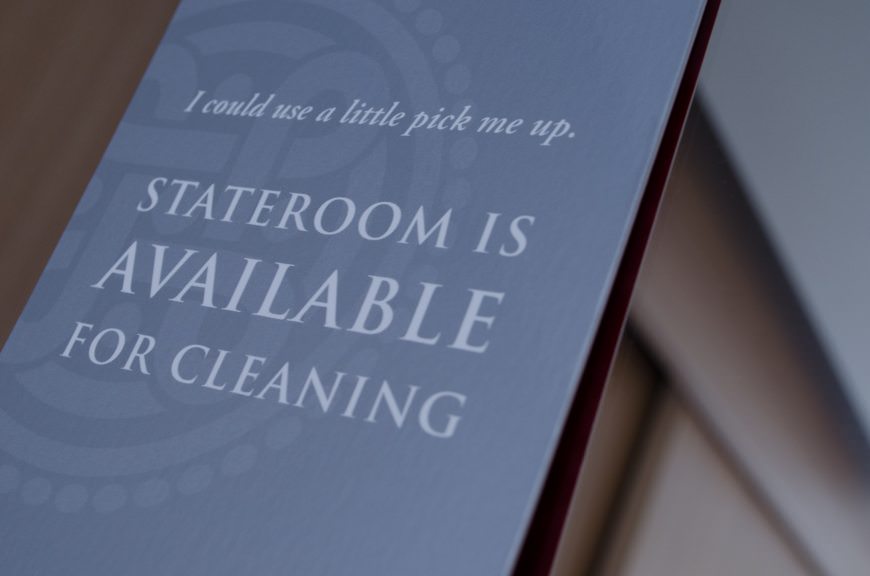 Since we’re here in Amsterdam for this auspicious and decidedly personal occasion, now seems as good a time to any to make a Live Voyage Report announcement: beginning May 12, 2015, join us here for a very exciting Live Voyage Report as we sail aboard Viking Cruises’ Viking Star – Viking’s first oceangoing cruise ship – as we sail from England to Bergen, Norway to witness her Christening Ceremonies!

From the canals of Amsterdam to the fjords of Norway, this could be Viking’s biggest year yet.

Our Live Voyage Report from the 2015 Viking River Cruises Viking Longships Christening Ceremonies continues tomorrow from the beautiful city of Amsterdam! Be sure to follow along on twitter @deckchairblog or the hashtag #LiveVoyageReport.