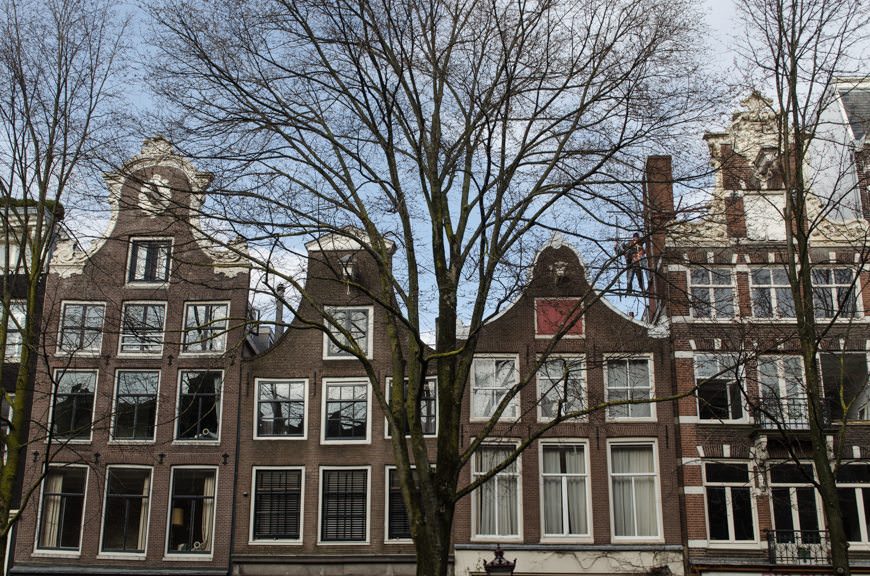 Exploring the real Amsterdam through the eyes of its citizens with Viking River Cruises. Photo © 2015 Aaron Saunders

At the Viking River Cruises christening event in Amsterdam, Netherlands last week, my fellow journalists and I were turned into control subjects for the day, testing out a new program that Viking already offers in Hoorn and in the Slovakian city of Bratislava: Home Visits.

A Home Visit is a special type of shore excursion that actually invites you into the home of a local citizen to learn about their life, their dwelling, and maybe even partake in a drink. Viking doesn’t offer Home Visit excursions in Amsterdam just yet, but they’re cautiously analyzing their itineraries to see where home visits might be popular. So, we set out for the day to road-test Viking’s latest pilot project in Amsterdam. 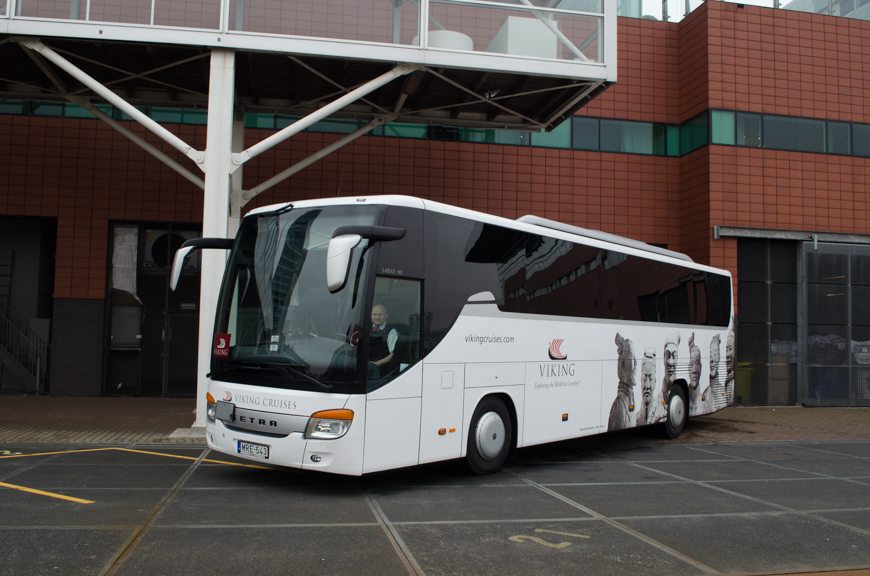 In typical Viking fashion, we boarded a new, logo-branded coach for our day of touring in Amsterdam. Photo © 2015 Aaron Saunders

Our first home visit was a real adventure. At a narrow building located adjacent to one of Amsterdam’s ubiquitous canals, we stood out in the cold for what seemed like minutes on end as we waited for a response to our knock on the door. When Niko, an exciteable chap of about 70 finally did emerge, we immediately saw why it took so long for the door to open: there are no living quarters behind this door; only a murderously steep staircase leading up to the main living area one floor above.

Going up was every bit as challenging as it looked. In North America, where everyone is babied to no end with a safety blanket knit of guardrails and signs and protective barriers, this kind of staircase would represent some sort of Franz Kafka novel come to life. Here in Amsterdam, it’s just a part of daily life, like trams, bikes, and cheese. 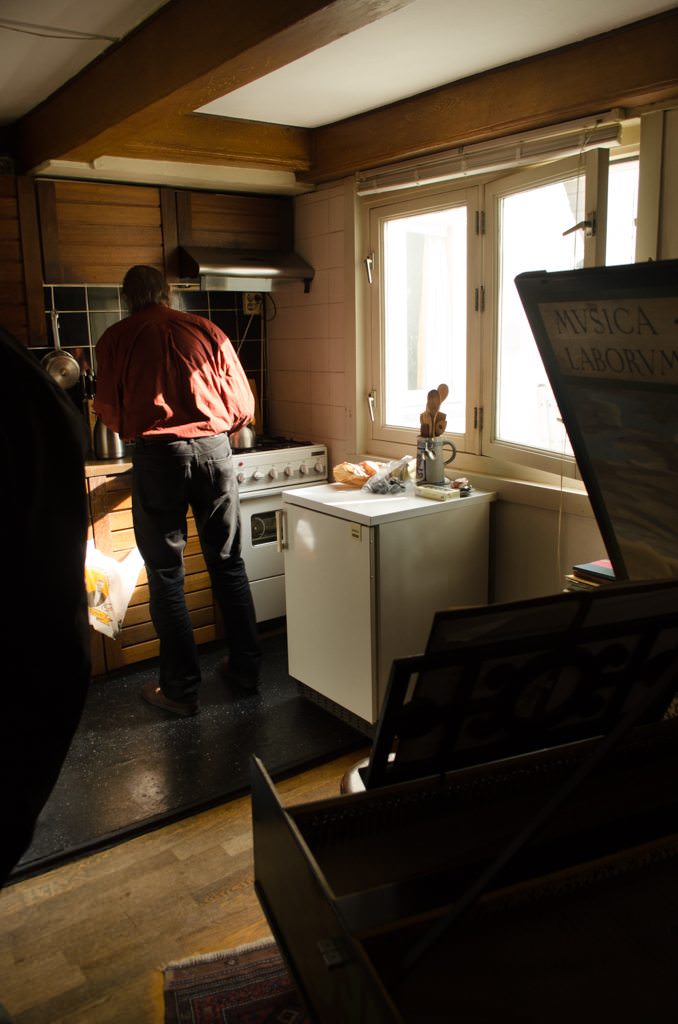 Niko used to work for a record shop, and music is clearly in his blood. He hand-crafted (and hand-painted) the small piano that occupies a massive amount of real estate between his kitchen and the living room. By North American standards, it’s a broom closet. By European standards, it’s cozy and inviting.

The real selling feature is Niko’s view: it’s the postcard-perfect view of Amsterdam, with canals and streets below. It’s almost worth the death-defying acrobatics work it takes to climb up here in the first place. 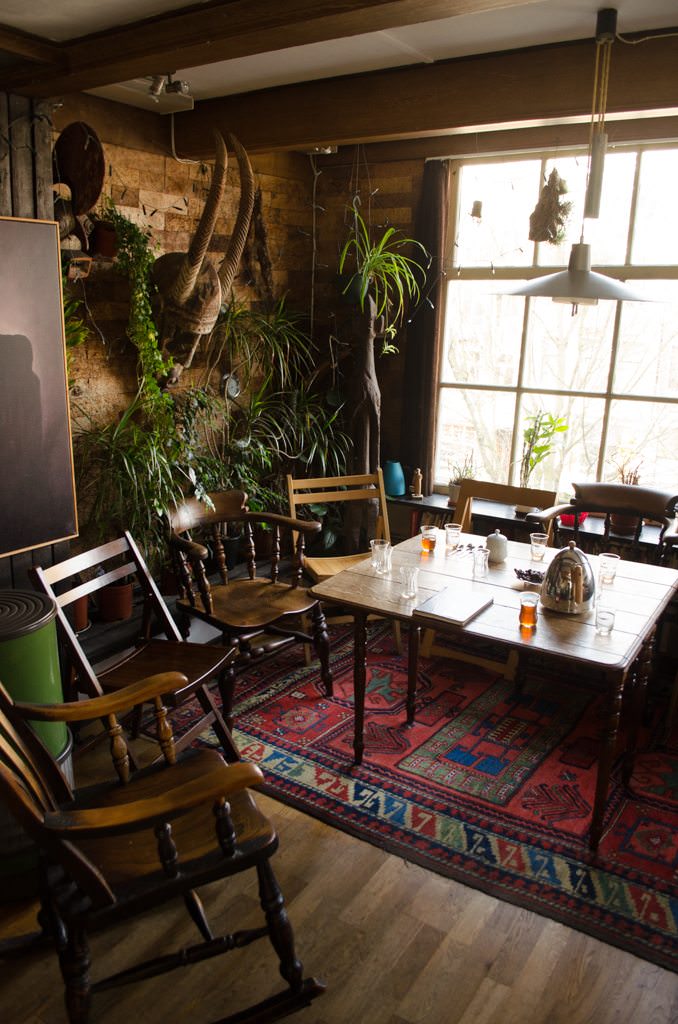 His living room is directly adjacent to the kitchen. Space is tight, but we all manage to sit around a small table – and admire his view. Photo © 2015 Aaron Saunders 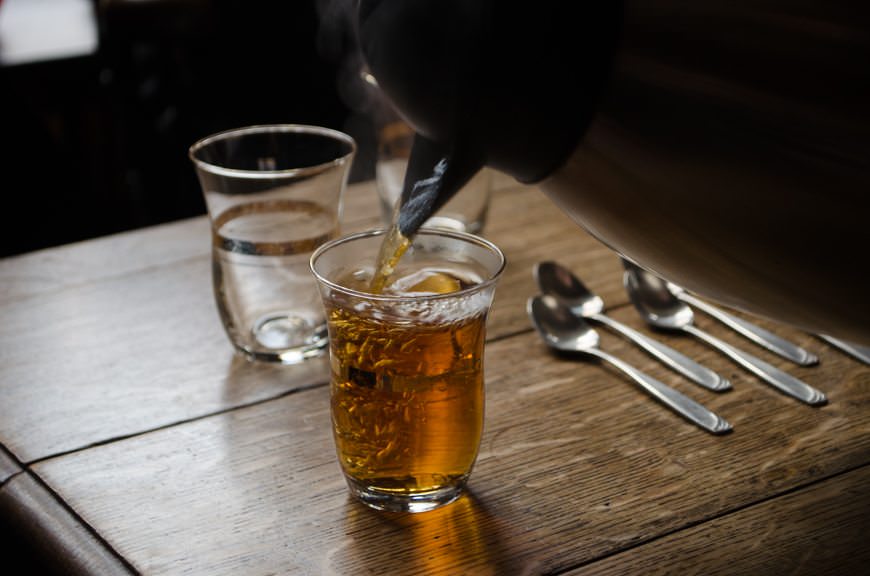 Niko serves us all tea and makes us feel as though we are family. Photo © 2015 Aaron Saunders

Here’s why I love these home visits: they’re a great chance for North Americans to see how much of the world lives. Two-car garages, massive lawns, and sprawling luxury complexes simply don’t exist here. Not that this is any cheaper, mind you: a prime location like this would go for a bundle had Niko not bought at the right time. It’s also an excellent lesson in Dutch hospitality, customs and culture. And that’s something you can’t get from a panoramic motorcoach tour of the city. 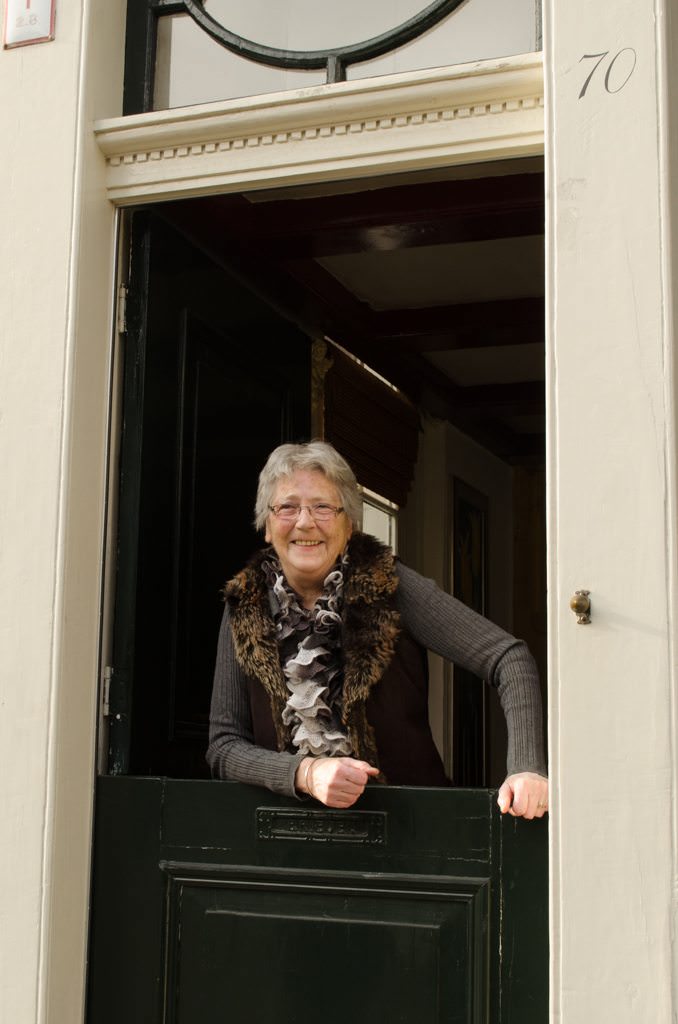 Our second host, leaning out from her Dutch Door…Photo © 2015 Aaron Saunders 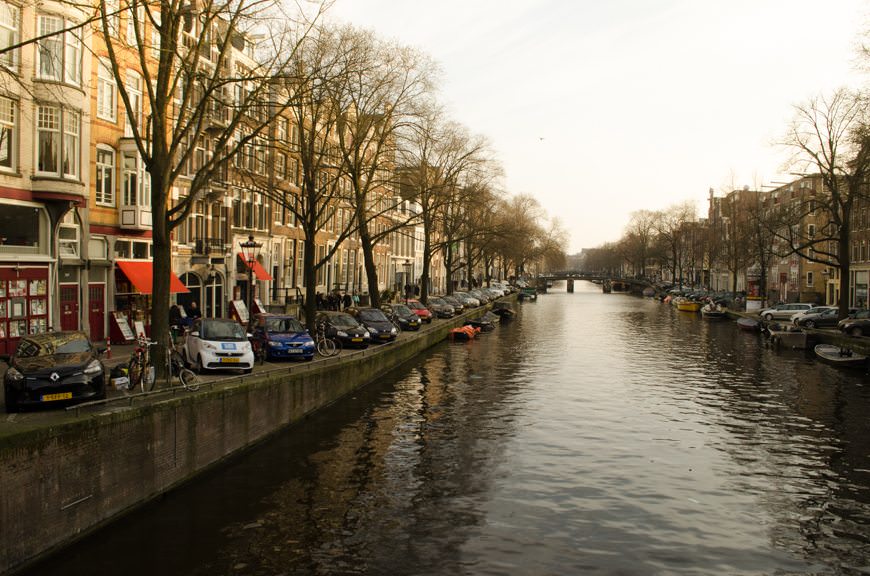 Our second home visit took us a few blocks away, to a kind retired lady that had a flat overlooking a canal and accented by a grey Dutch Door. While the house’s lone staircase requires some very careful navigation, it’s not nearly on the same scale as our first experience.

Our host is a kindly lady, but one who speaks limited English. Our guide translates for her, but she is genuinely pleased that she can share her even her small knowledge of the English language with us. Again, it’s all about contrasts: North Americans take for granted their lack of training in alternative languages, while many Europeans prize their polyglotism. She lives alone, and someone makes the suggestion that we should set her up with the also-available Niko up the street. Perhaps it’s the Fault in Our Stars for the older set. 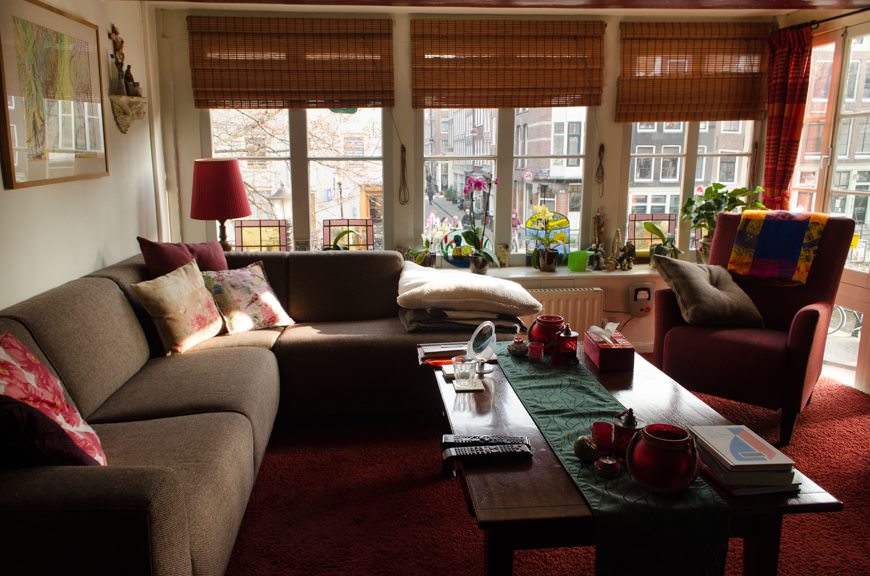 Her living quarters are more elaborate than Niko’s, and she even keeps a spare bedroom set and ready “for when guests come.” Which, I have no doubt, they often do! Photo © 2015 Aaron Saunders

The last home visit was unlike the rest: a Victorian-styled complex not far from Amsterdam Centraal Station that acts as an exclusive domicile for women over 50 years of age. Rented at a rate of €425 per month, it’s a steal of a deal for something so centrally located. It’s also quite beautiful, with the imposing brick façade giving way to an intimate outdoor courtyard with entrances to the residences jutting off around it. You can practically smell lavender and fresh flowers as you walk down the corridor. 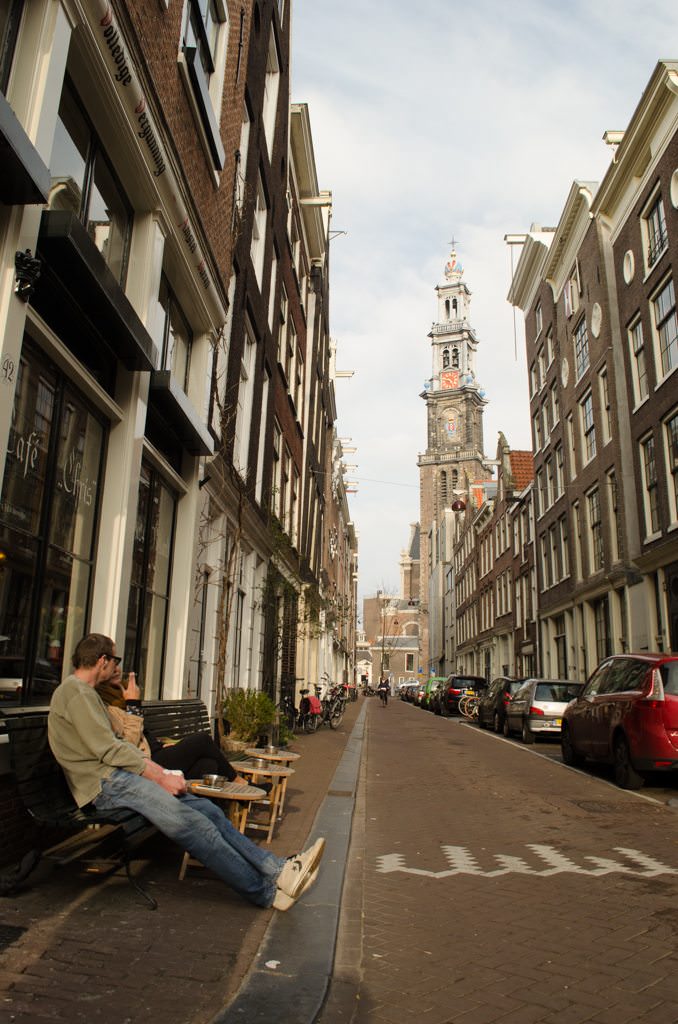 We meet our third host, a woman in her 60’s who has called this complex home for over 20 years. She’s your typical grandmotherly figure, if your grandmother happens to be Dutch. Her apartment is small but highly functional, and her living room has more than enough room for all of us to squeeze around.

Our host tells us that she only got the flat as a bit of good luck, being in the right place at the right time. That’s the polite way of saying she nabbed it before someone else could. 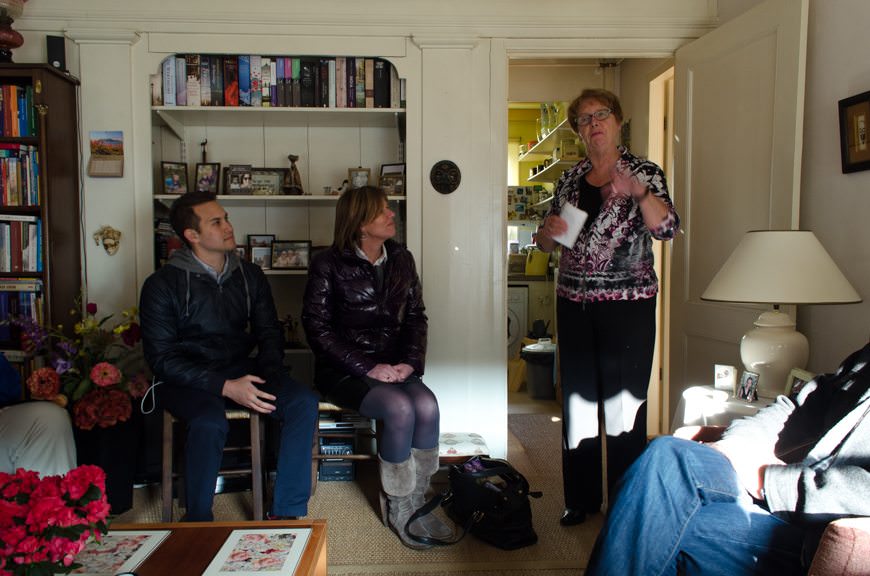 We also learn that men are allowed to visit (or “visit”, if you get my drift) and stay overnight at these residences – but only up to three nights in a row. All I can recall thinking is that the Gossip Mill must be the size of the Hindenburg here. Can you imagine a 70-year old man running a gauntlet of retired ladies poking their noses out of their doors on the morning after?

She also tells us about some of the other residents in the building. Cue the typical journalist lead-in question. “You must have a wonderful community here. I suppose everyone helps each other?”

“No.” Complete poker face. If she’s kidding, she doesn’t let on.

The naked honesty of our host transfixes the room for a moment, until the journalist manages to pick themselves up from the floor and go back in the ring for another match. “So,” he said gingerly, “you wouldn’t look out for each other?” 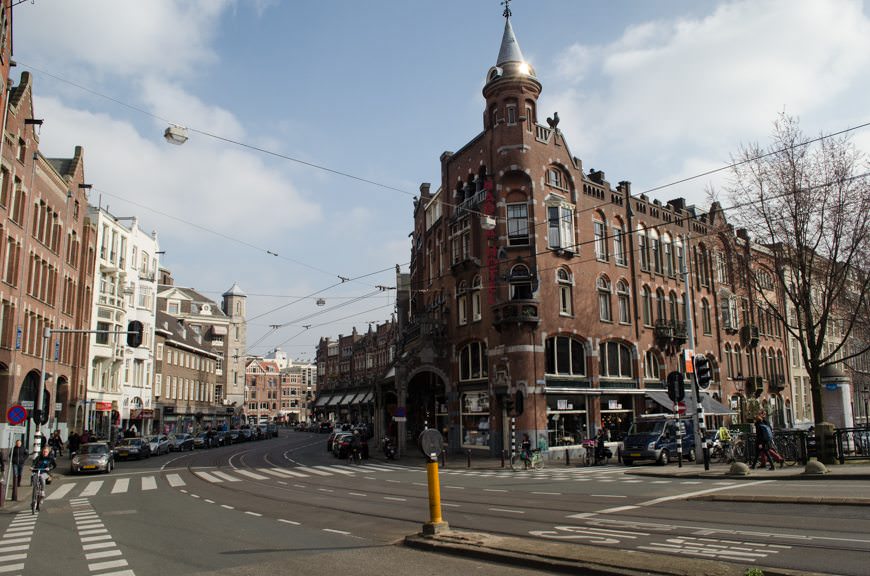 She’s not being mean, merely matter-of-fact. Things are the way they are here in the Netherlands, and people are honest and open-minded. With our host, there’s little time for social pleasantries: she says what she means, and means what she says.

These are my favorite kinds of tours. They give you some perspective on the local customs, culture and way of life of the average person in any given place, and here in Amsterdam I think that is especially important. It’s too easy to lump this gorgeous Dutch capital into shades of Rembrandt, Coffee Shops and Red Light districts. Many people visit Amsterdam; few truly see the city for what it is.

If all goes well, Viking hopes to roll these experiences out to guests in 2016. I hope they do; after six previous visits, I feel I know an entirely new side of this gorgeous city now. 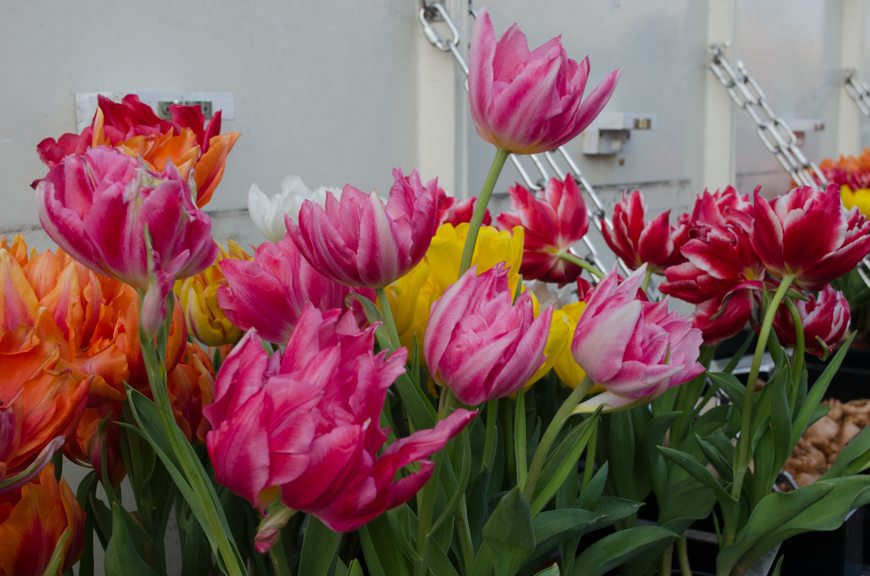