You are here: Home / Destinations / Europe / Live from onboard S.S. Maria Theresa In Amsterdam 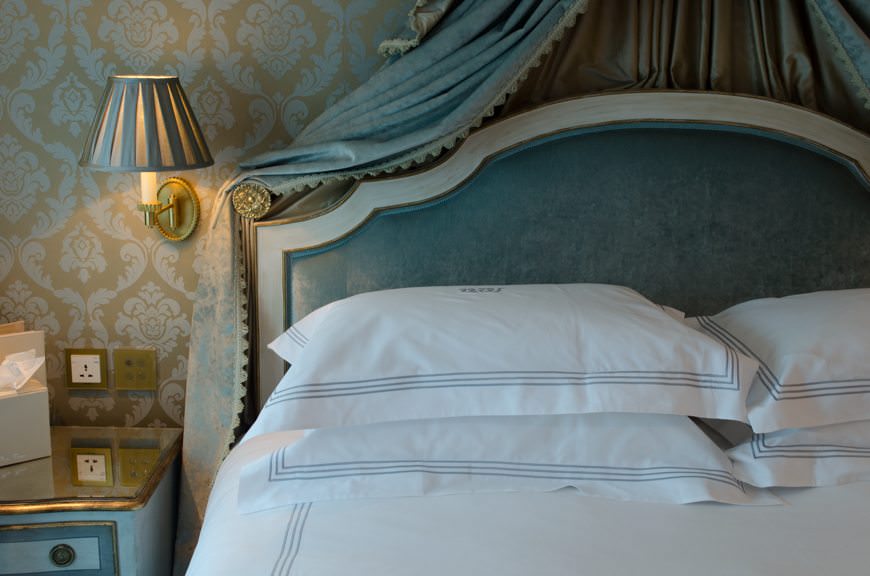 One thing I learned when I woke up this morning is that getting out of bed can be a task in itself aboard Uniworld Boutique River Cruise Collection’s S.S. Maria Theresa. In pictures, the Savoir of England bed in my Category 2 Stateroom looks voluptuous and inviting – and in reality it is exactly that, wrapping you in its Egyptian Cotton-embrace.

The longer I stay in my stateroom on Schonbrunn Deck, the more convinced I am of its ingenuity. Lights (once you figure them out) are surprisingly customizable, with convenient bedside controls that operate with the push of a button. Even the Do Not Disturb sign is electronically controlled, and your keycard acts as a further barrier, alerting the room stewards (who are nothing but kind) that the room is occupied. 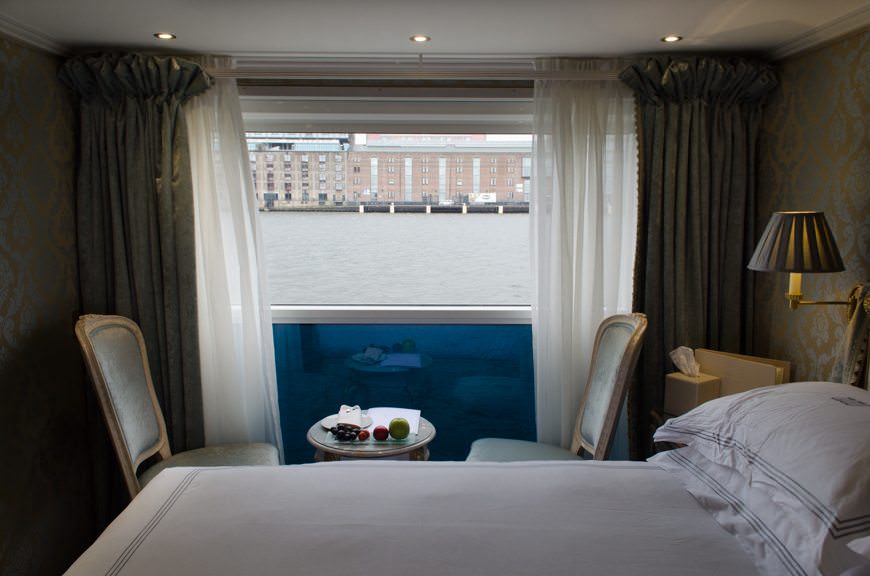 Stateroom Bliss: my Category 2 Stateroom features a French-style balcony that opens with the push of a button. Photo © 2015 Aaron Saunders 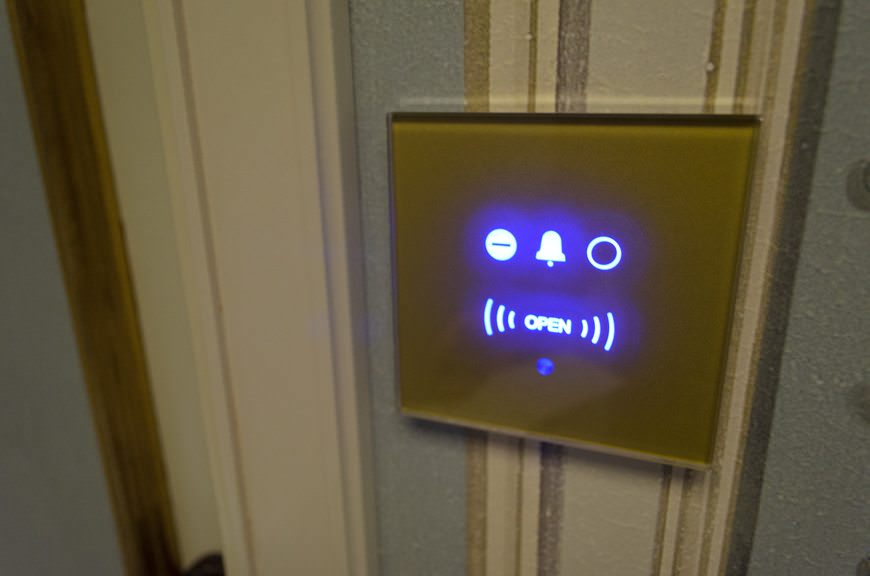 This information panel outside each stateroom functions as your keycard reader and provides valuable instructions for cabin stewards. Photo © 2015 Aaron Saunders

I’ve also spent an inordinate amount of time looking at the fit-and-finish in the room, which is quite spectacular. Even if the whole Baroque, Louis XIV-thing isn’t your bag, there’s no denying this is one meticulously crafted ship. Hand carved woodwork is everywhere, as are elements hand-painted in gold.

Elsewhere, even the elevator shaft – a utilitarian space on any ship – is painted in striking patterned gold leaf. Every door onboard, even crew access doors, are done up like an Austrian palace. Scant traces of modern doors and handles can be found, and I literally found myself crawling along the floor (well, not for long) to figure out where Uniworld had hidden the fire doors in the passenger corridors. Hint: they’re cleverly disguised as wall panels. 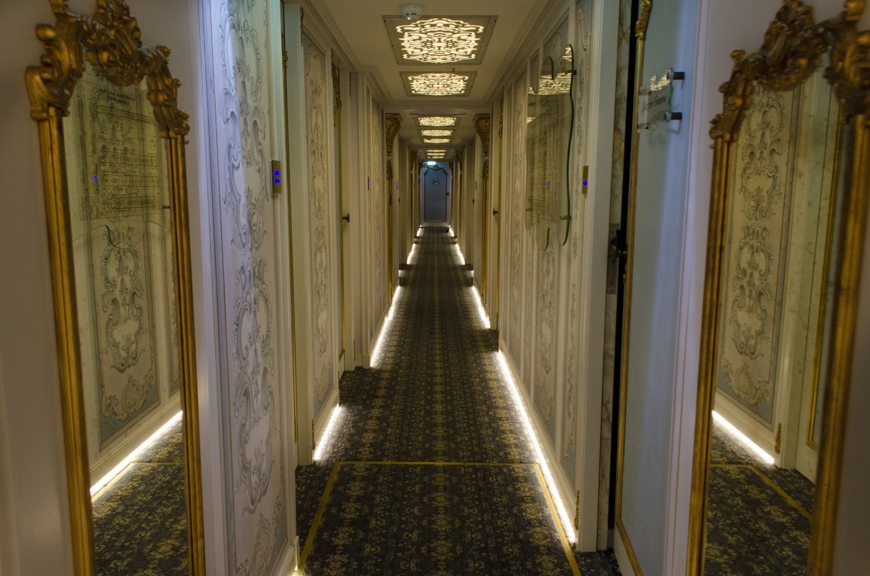 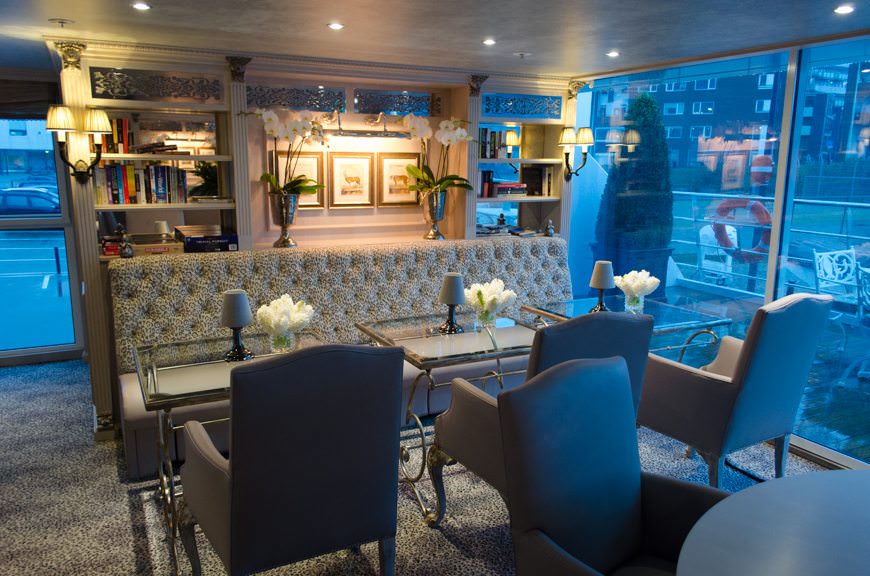 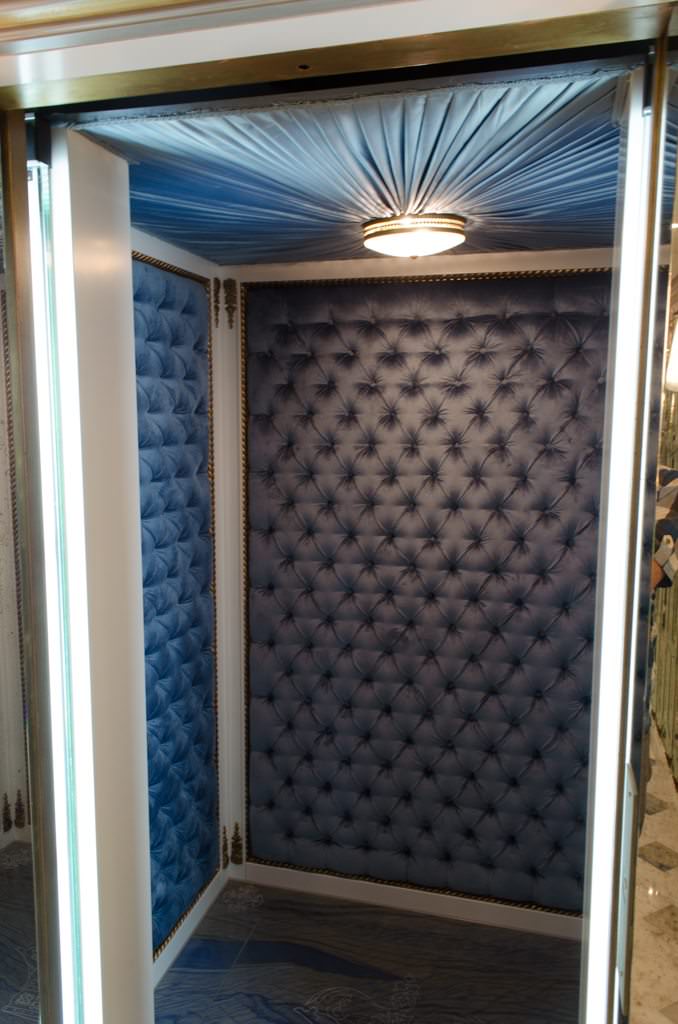 How complete is Uniworld’s decor? Check out the passenger elevator…Photo © 2015 Aaron Saunders 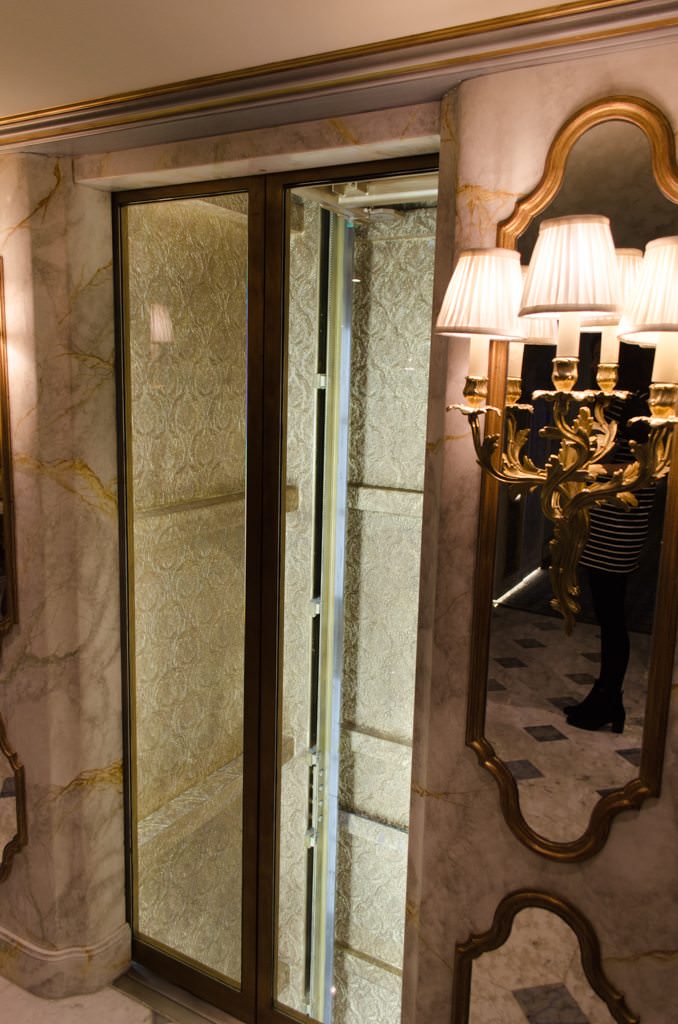 Let me say this: Uniworld’s décor may not be to everyone’s immediate liking. That much is apparent, and there’s not much I can do to convince you otherwise if your tastes run to a more minimalist style. But here are five reasons you might want to put this river cruising pioneer on your radar: 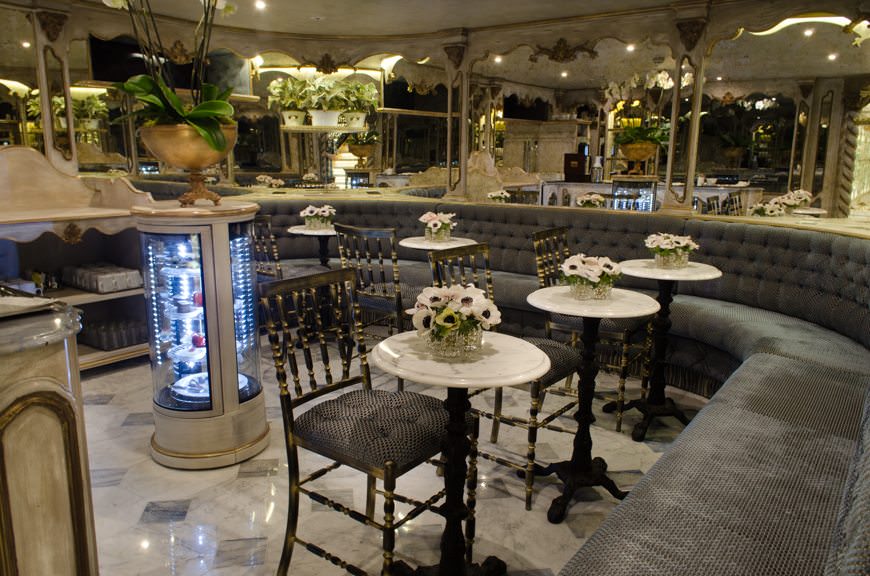 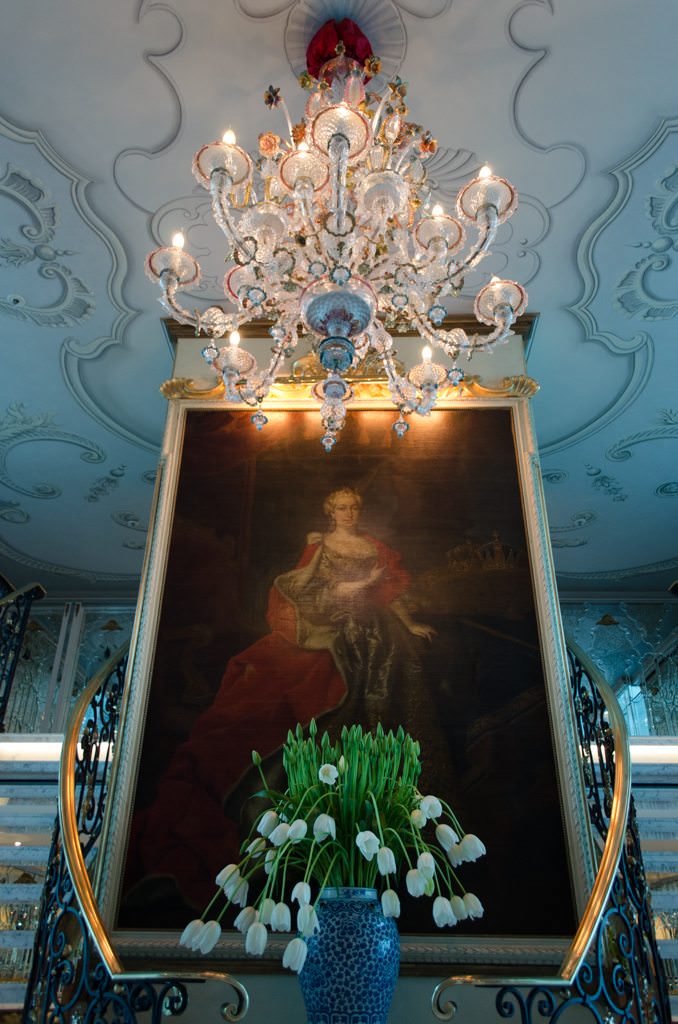 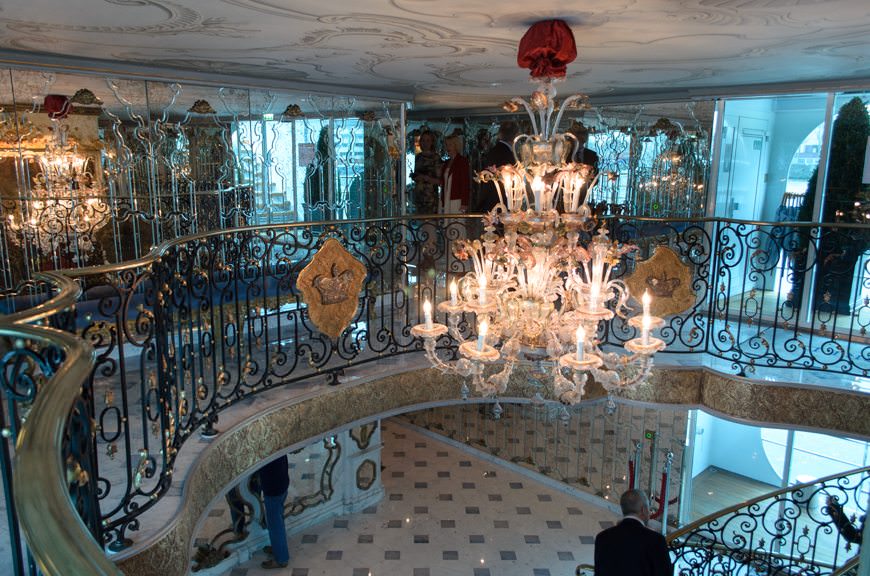 …recalls the grandeur of a bygone era. Photo © 2015 Aaron Saunders 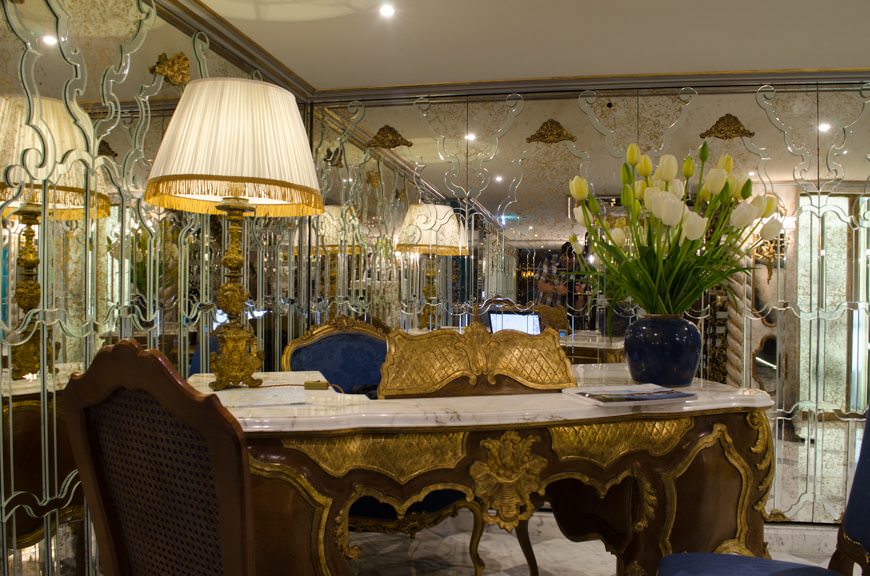 Check out the Cruise Director’s desk at the Reception Lobby. The gold partition rising above the desk hides the laptop computer behind it. Clever! Photo © 2015 Aaron Saunders

I also want to touch briefly on Uniworld’s shore excursion program. I had a chance to get a small taste of it this afternoon when I joined my fellow guests in a private tour of the Anne Frank Museum – a place I have always wanted to visit, but didn’t have the stamina to brave the lines for. 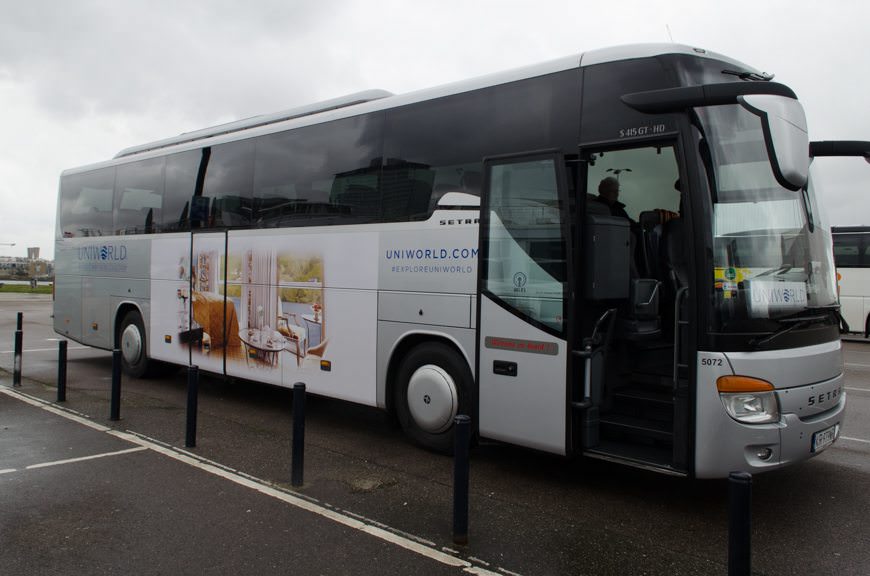 Boarding our Uniworld-branded coach for a private visit to the Anne Frank House in Amsterdam today. Photo © 2015 Aaron Saunders

I was a teenager when I read The Diary of Anne Frank. Growing up as a Canadian, it was a revelation to me: the idea that someone roughly my age was persecuted simply because of their religion. But the concept was too esoteric for my brain at the time to grasp: the idea of having to change countries, move towns, and eventually hide out in your own house just to escape the forces that wished to destroy you.

Wherever you are reading this from, consider this: one day, someone tells you that you don’t fit in. You’re an enemy; a danger to the State. Just think about it for one moment. You can’t, can you? No. Because to think about it is to admit that it’s one of the most horrifying prospects of human nature: those who wish to do you harm often can. 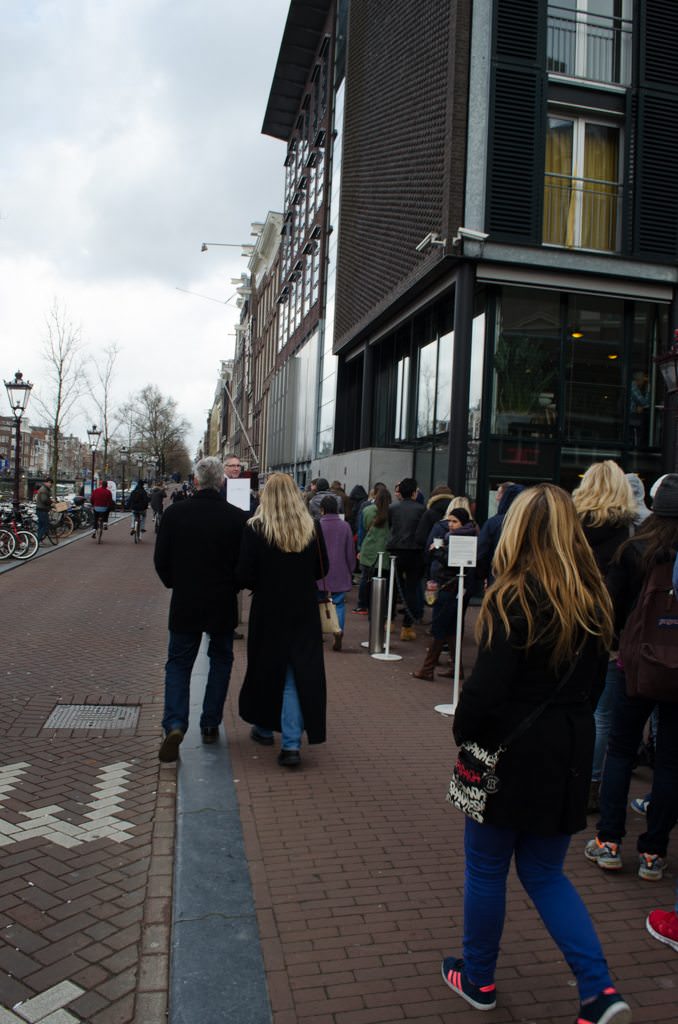 Outside the Anne Frank House in Amsterdam. Our Uniworld tour was able to completely bypass the line on the left. Photo © 2015 Aaron Saunders

Boarding our Uniworld-branded coach shortly after 2:00 p.m., we arrived at the Anne Frank Museum and quickly bypassed the massive admissions line that stretched for a block and a half to the south. This kind of exclusivity is huge: lines at the museum can stretch for three hours or more, and the feeling of waltzing straight past the crowd is a decidedly luxurious one.

We were then invited to a private briefing from a volunteer member of the Anne Frank Museum – a young girl who, despite being in her early 20’s, could have probably passed for Frank as a young woman. This 30 minute briefing was amazingly informative, and essential for those who have not read the diary. But here I will reveal my personal bias: don’t even think of visiting the museum if you haven’t read the diary; you won’t appreciate it in the way that you will if you have read the book. 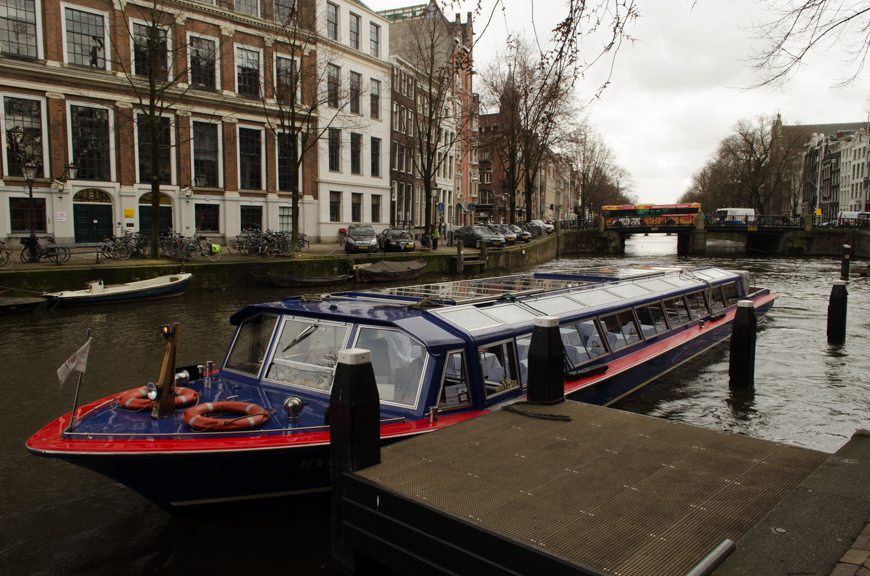 After our moving visit to the Anne Frank House, we took a canal boat back to the S.S. Maria Theresa. Photo © 2015 Aaron Saunders

After that, we were turned loose on the museum, and I must confess: I blew through the first few rooms quickly. Photography isn’t allowed, which is probably a redundant rule: the museum is so packed with people that pictures would be impossible anyway.

No one knows who turned the Franks over to the Nazis. Anne’s ultimately heinous fate was one that she shared with millions of others who didn’t deserve it; men, women and children who only had the misfortune to be born Jewish. Sent first to Auschwitz–Birkenau, she was later transferred to the Bergen-Belsen concentration camp, where she died of Typhoid Fever sometime in March of 1945 at the age of 15. She missed the liberation of Bergen-Belsen by just weeks.

For me, seeing that bookcase reminded me of why I travel: to better understand the world around me, and to attempt to grapple with a human history that frequently is too bizarre, horrifying and accidental to be believed. 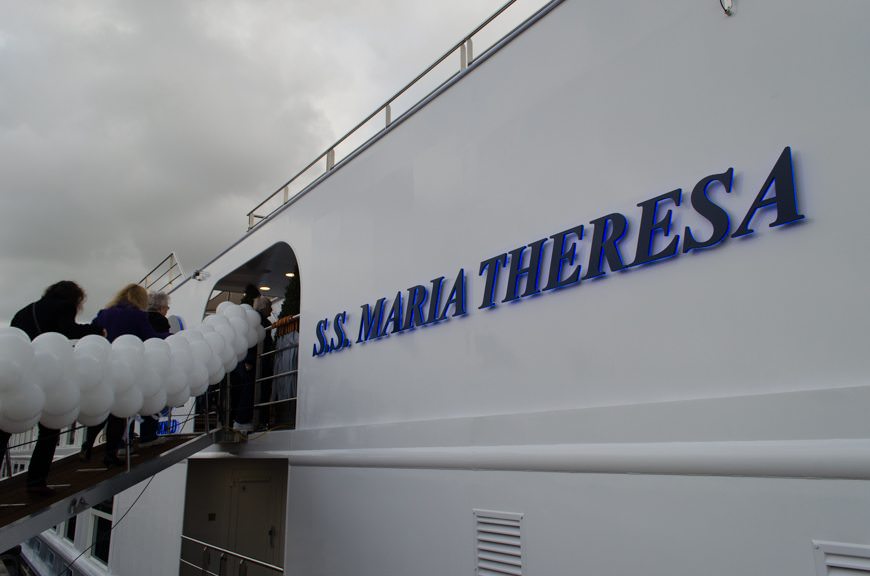 Some may say that Anne Frank died before she had really lived. This is true. But her most enduring gift to us is her uncommonly mature understanding of the human condition, and the knowledge that we, too, have the power to change the world and reverse the damage created by hatred and prejudice. To quote John F. Kennedy, “We all breathe the same air. We all cherish our children’s futures. And we are all mortal.”

My only worry is that now, 70 years after her death, we need Anne Frank more than ever.

Our Live Voyage Report from the christening of Uniworld Boutique River Cruise Collection’s S.S. Maria Theresa will continue with a full photo-tour of this striking ship! Be sure to follow along on twitter @deckchairblog or the hashtag #LiveVoyageReport.