Between its rivers and canals, there is a lot you can see in France traveling along the country’s waterways. And if you have some extra time to travel, Uniworld will begin offering its Ultimate France 22-day package from Paris to Lyon. The itinerary includes travel along six different waterways in northern, western and southern France. It’s the equivalent of taking three different river cruises on one trip to France.

Beginning in 2015, the Ultimate France river cruise will be available from March through October each year. The newly featured trip can be broken down into three different cruises: 1) Paris & Normandy; 2) Bordeaux; and 3) Burgundy & Provence. Each river cruise will last for seven days. When it’s time to head to the next region, you will be transported by high-speed train or by air to begin the next part of your journey.

Your trip will begin in Paris where you will embark on your first ship – the River Baroness. This ship is the smallest of the three vessels you’ll board. It has two decks and carries up to 118 passengers. 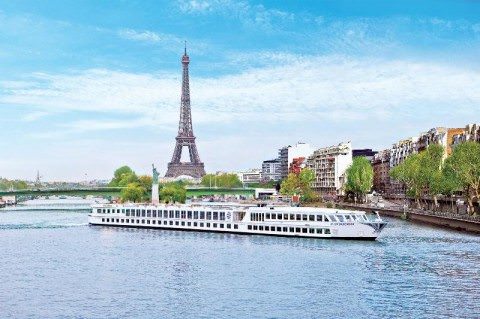 The River Baroness travels on the Seine River from Paris to Caudebec-en-Caux, which is about 30 miles northeast of Honfleur. As you cruise along the Seine River, your boat will dock at cities such as Vernon, Rouen and Caudebec-en-Caux. Some of the tours will be near the Seine. And if you’re on those that are not, you will be transported by motor coach to the featured excursions.

A few of the highlights of this trip are a visit to the Normandy Beaches, a walking tour of Honfleur, a visit to the home of the famous painter, Claude Monet, in the village of Giverney – and, of course, a tour of the magnificent city of Paris.

On the last day  of your Seine River cruise, you will disembark in Paris and head to Bordeaux on a high-speed TGV train. The train travels at a speed of up to 201 mph. Bordeaux is 367 miles southwest of Paris, and the train ride takes about 3 hours.

#2 – A River Cruise in Bordeaux

The Bordeaux, Vineyards and Châteaux itinerary was just added to Uniworld’s collection in 2014. The River Royale was moved from Provence to Bordeaux. Before it began sailing from its new home, the vessel was remodeled and now carries up to 130 passengers rather than 132.

The city of Bordeaux is located on the Garonne River. It is where your cruise will begin and also where it will end in this region. The historic part of the city is one of the UNESCO Sites you will visit in Bordeaux. Two other cities you’ll visit on the Garonne River are Cadillac and Medoc. You’ll have a chance to visit vineyards and sample wines. The city of Medoc is famous for its vintage wines, which are considered to be some of France’s best.

The Gironde Estuary is formed just north of Bordeaux where the Dordogne and Garonne Rivers meet. You’ll visit the city of Blaye, which actually sits between the two rivers. As you travel eastward on the Dordogne, you’ll visit a couple of UNESCO World Heritage Sites – the medieval city of Saint-Émilion and the Lascaux Caves.

The Dordogne River is another wine-producing area. Both Saint-Émilion and Bergerac are known for their vineyards and wines.

At the end of your river cruise, you will fly from Bordeaux to Marseille, which is about 70 miles south of Avignon.

#3 – A River Cruise in Burgundy & Provence

After arriving in Marseille, you will transported by motor coach to Avignon where you’ll board the S.S. Catherine. This ship is the largest and the newest of the three ships. It made its debut in 2014. See Ralph Grizzle’s coverage of the inaugural events and cruise here. The S.S. Catherine has three decks and carries up to 159 passengers. Stateroom size begins at 162 square feet. That’s pretty spacious compared to staterooms on both the River Baroness and the River Royale, which start between 128 square feet and 140 square feet respectively. 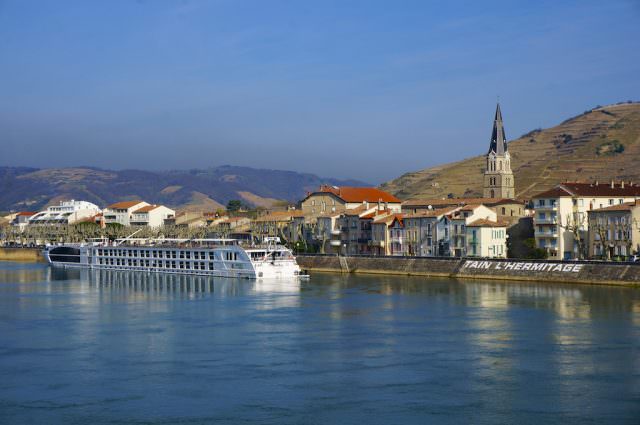 For your third river cruise, you will journey through Provence and Burgundy as you travel along the Rhône and Saône Rivers. The two rivers meet in Lyon, France. Your ship, the S.S. Catherine, will travel northward from Avignon to Lyon. Before you begin sailing toward Lyon, you will have a chance to visit either Arles or Tarascon, both of which are south of Avignon.

The city of Arles and its Romanesque structures were designated as a UNESCO World Heritage Site in 1981. A walking tour of Arles is sure to take you back into history as you marvel at its grand Roman monuments.

Avignon is referred as the “City of Popes” and is also another UNESCO site in Provence. You will be offered a walking tour of the city. Or you may choose a different excursion that will give you a chance to experience another side of Avignon – something that’s called the “Off the Beaten Path” way of discovering other less familiar sites in this historic city.

A few other places you’ll visit include Viviers, and the twin cities of Tournon and Tain l’Hermitage. You’ll be able to take a tour of the Hermitage vineyards and sample its wines.

Lyon is referred to as the Gastronomic Capital of the world. It’s located about 56 miles north of Tournon at the confluence of the Rhône & Saône Rivers. If you enjoy gourmet cooking and gourmet foods, you love the Gourmet Tour of the city.

The last cities you’ll visit on your tour are Chalon sur Saône and Beaune, where you’ll be able to visit the famous Hospices de Beaune and the open-air food market before heading back to Lyon where your 22-day trip will end.

This trip is recommended for people who have the time to take a vacation that is at least 25 days long, who enjoy river cruises, who want to travel to France, and who like the idea of traveling on several different waterways. One of the main benefits of taking this cruise is the money you will save on airfare. If you took these three river cruises at different times, you would have to pay the airfare each time you traveled to France. That alone could save you thousands of dollars. So if you have the time and would like to travel in France, this could be one of your best options – especially if you love river cruises.