Good news out of American Cruise Lines for those who want to sail the Mississippi River: not only has the line announced the name of their newest paddlewheeler, they’ve also given her some very unique voyages that are far longer than the average journey up one of North America’s most storied waterways.

Scheduled to depart on her maiden voyage on March 28, 2015, American Cruise Lines have named their newest riverboat American Eagle. Capable of carrying 150 guests, she’ll offer mainly weeklong journeys along the Mississippi that either depart roundtrip from New Orleans or sail one-way between New Orleans and Memphis. 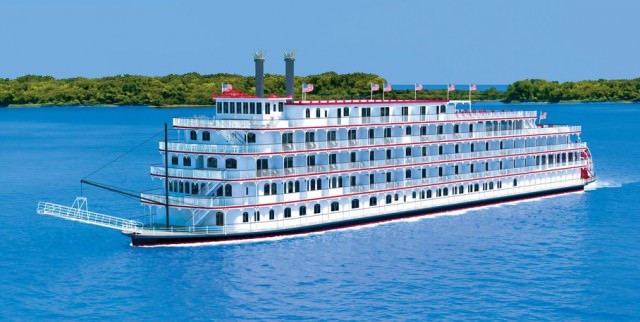 Much like the line’s existing Queen of the Mississippi, American Eagle is being built to emulate the classic days of steamboating along the Mississippi River, as popularized by Mark Twain’s works of literature. She features a traditionally-inspired profile and interior décor, but with all the modern amenities that cruisers have come to expect. These include three separate lounges, including the Paddlewheel Lounge that looks aft out over the ship’s bright red paddlewheel.

American Eagle will also feature a well-stocked Library and Chart Room, as well as complimentary Wi-Fi internet access, a passenger elevator that travels to all decks, and even an outdoor exercise area and golf putting green.

What makes American Eagle truly unique among Mississippi river cruisers, however, are her expanded itineraries that cover the entire length of the famous river in a single voyage.

“It’s been evident that our guests enjoy cruising more than one portion of the Mississippi River at a time, often purchasing cruises back-to-back,” said Timothy Beebe, vice president of American Cruise Lines. “With this new offering, we provide a unique opportunity to travel the entire leg of the Mississippi River and experience the complete history of the western frontier.”