One of A-ROSA’s river cruise ships – A-ROSA Mia – ran into a bit of trouble last week, when it struck a pedestrian bridge on the Jochenstein Locks along the Danube. According to Seatrade, the incident resulted in the ship’s wheelhouse being sheared off. 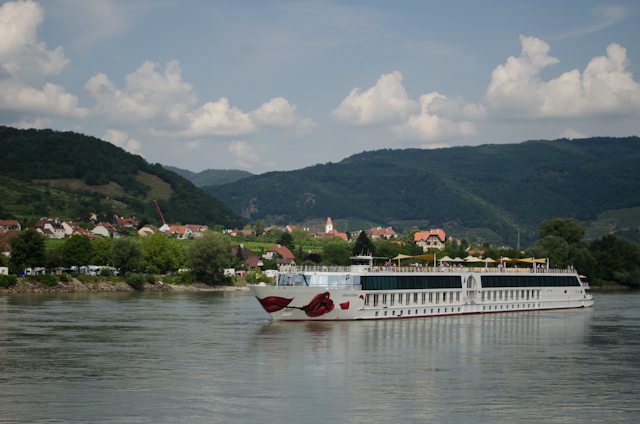 A-ROSA Mia was involved in an accident in the Jochenstein Lock last week. Pictured here is her sister-ship, A-ROSA Donna. Photo © 2014 Aaron Saunders

No passengers or crew were injured in the incident, but the ship was left inoperable and everyone was required to disembark the ship. According to the Upper Bavaria South Police Department, the crew had neglected to lower the wheelhouse before leaving the locks. Damage to the locks was negligible, but Police say an estimated €150,000 in damage occurred to A-ROSA Mia.

Guests were bussed to Passau, and the cruise was cancelled. A-ROSA was also forced to scrap two of the vessel’s sailings. She will return to service on August 25, 2014 after undergoing repairs in Linz, Austria.

Built in 2003, A-ROSA Mia can carry up to 242 guests in 100 staterooms, but was only carrying 192 guests at the time of the accident. Currently, she is not one of the vessels marketed to North American guests. 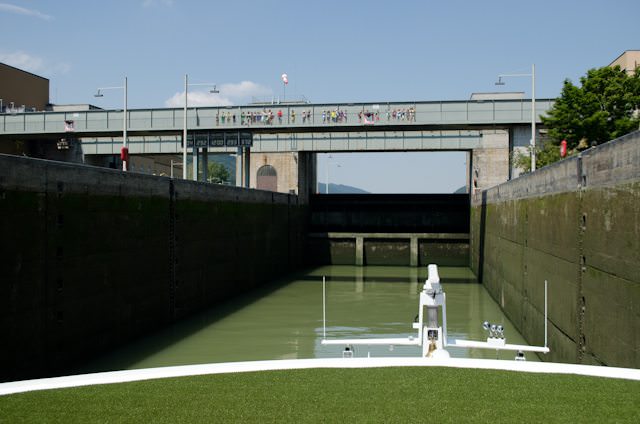 The Jochenstein Lock near Passau, Germany. The pedestrian bridge can clearly be seen in this photograph taken in mid-July onboard another vessel. Photo © 2014 Aaron Saunders

Guests on the affected sailings have been contacted by the line and have been offered replacement cruises, onboard credits, and an additional complimentary voyage with A-ROSA for journeys up to five nights. The original cruise was a five night cruise marketed to European clientele.

We’ll update you on A-ROSA Mia’s re-entry into service as information becomes available.

More information on A-ROSA can be found by viewing our complete profile here on River Cruise Advisor.