You are here: Home / Cruise Companies / Live from Amsterdam: the Maiden Voyage of Tauck’s ms Inspire 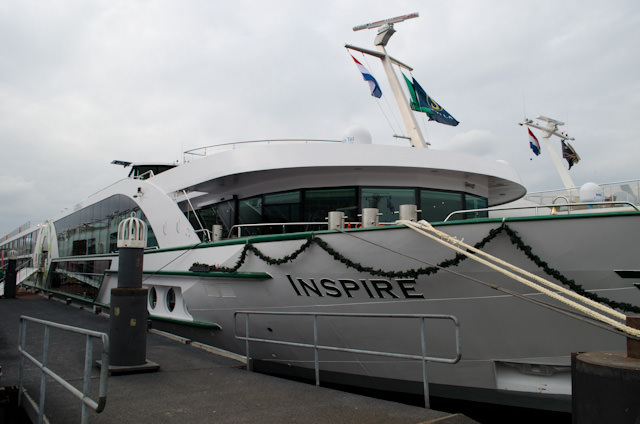 Today, I stepped aboard Tauck’s new ms Inspire for the first time at the Port of Amsterdam. And what a beautiful ship she is!

The ms Inspire still has that ‘new-ship’ smell to her. She’s the largest river cruise ship that Tauck has ever constructed, yet she only holds an additional 12 guests for a grand total of 130. Most ships this size can hold nearly 200 passengers. What you get is a ship that feels far more intimate and spacious than her size would suggest. 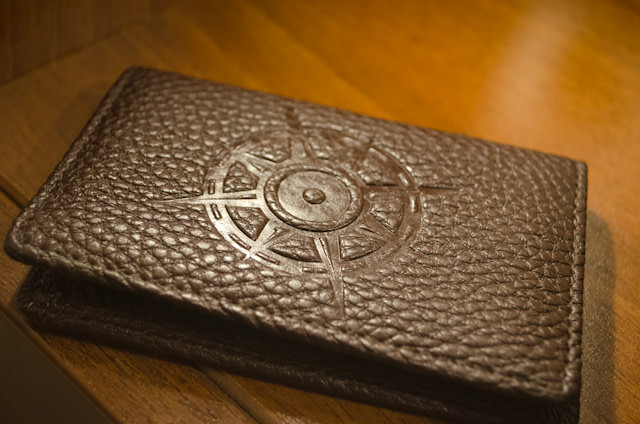 Getting here was, in typical Tauck fashion, a snap. My KLM flight from Vancouver touched down just after 10 a.m. local time, and despite a recent spate of unfortunate baggage accidents, my luggage was the sixth piece dispensed on Carousel 12 at Amsterdam Airport Schiphol.

From there, Tauck’s representatives were waiting just outside the baggage area, and I was whisked to the Inspire along with three other guests. When I embarked the Inspire, there was Arthur Tauck, Jr., greeting guests personally in the Lounge as a light lunch was being served. Enormously friendly and personable, Tauck stated that he loved two things about this exciting new ship: the amazing showers in each stateroom, and the meticulous attention to detail. He was right on both counts. 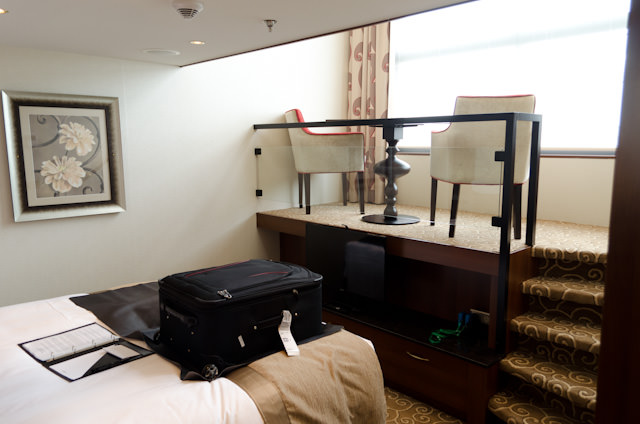 The new Loft staterooms aboard Tauck’s ms Inspire just might be some of the coolest ever designed on the waterways of Europe. Photo © 2014 Aaron Saunders

Simply put, my Loft Stateroom is one of the coolest features I’ve seen introduced in river cruising since Viking pioneered the Aquavit Lounge aboard their Viking Longships in 2012. At 225 square feet, my jaw hit the floor when I entered my Loft Stateroom aboard the Inspire and craned my head up to see the loft seating area, complete with a window spanning a full story in height. 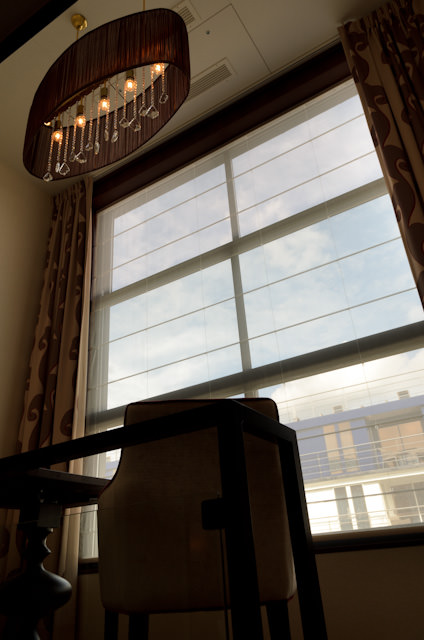 Lofty Views: the Loft windows are some of the largest on the ship. The middle panel can be electronically opened. Photo © 2014 Aaron Saunders

The seating area comes complete with a full-sized table that is, as I type this, perfectly capable of holding two books, several papers, a brochure, my laptop, and a bottle of Coca-Cola. There’s room left over to spare. Two comfortable chairs complete the sitting area, which faces out onto the water. 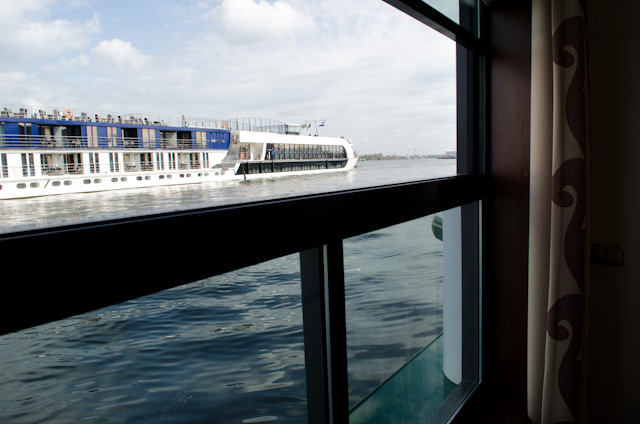 View from The Loft, with partition opened to let fresh air in. Stunning! Photo © 2014 Aaron Saunders

On the far wall are a collection of six switches. Together, they raise the sheer blind up and down electronically; open the window partition electronically to let fresh air in, and open and close the blackout drapes in a mind-blowing three seconds. Which, I suppose, is perfect if you’re sitting here “less than decent” and another ship comes alongside. 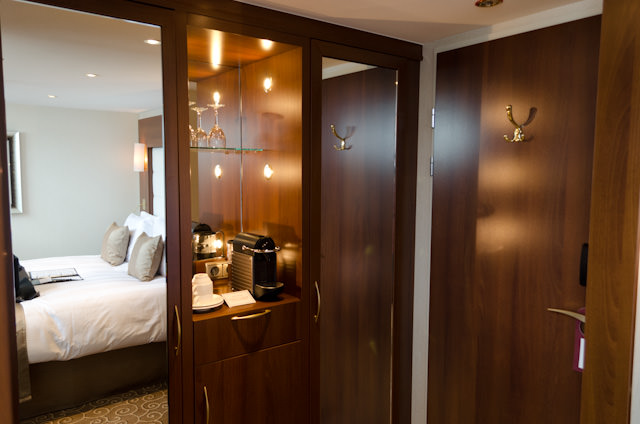 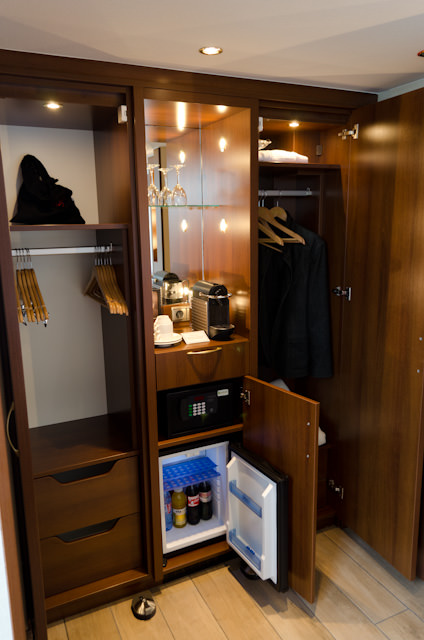 It is the convenience of this sitting area, coupled with the ability to open the middle window partition that makes these eight staterooms on Deck 1 so special. With the flick of a button, the fresh sea air from Amsterdam came swirling into my room, causing the curtains to dance hypnotically.

For a moment, I just stood there, watching another river cruise ship slowly come alongside us.

Letting the fresh air waft in, I set out to explore the rest of the room. The attention to detail is striking. To store my personal effects, my Loft Stateroom boasts two closets, ten drawers, an umbrella rack, and plenty of space under the bed to store a suitcase. Closets are lit on the inside, and feature full-length mirrors on the outside. 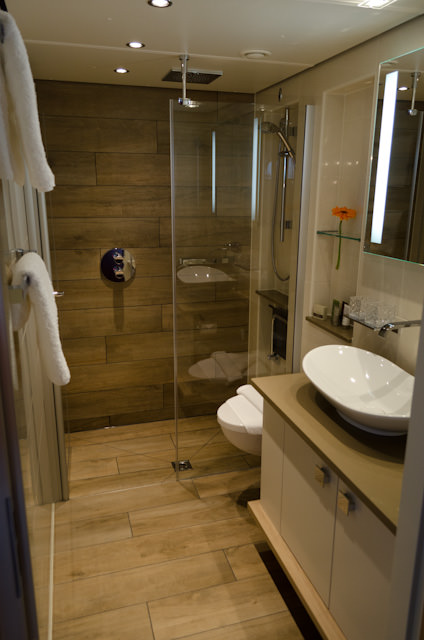 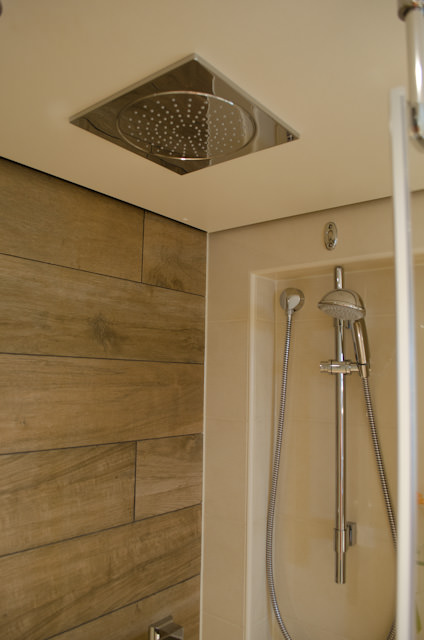 The oversized bathroom is smartly designed and attractively furnished. Molton Brown toiletries; a Villeroy & Boch sink; lit anti-fog mirror surfaces; and a dual function Grohe shower featuring rainforest settings and a standard detachable arm round out the mix. Bonus points for the garbage can attached to the left door that swings out when the door is opened; and for the cleverly-hidden toiletries cabinet behind the mirror.

Our Live Voyage Report from the maiden voyage of Tauck’s new ms Inspire continues tomorrow as we explore the Rijksmuseum and the Keukenhof Gardens in Amsterdam! Be sure to follow along on twitter by following @deckchairblog or the hashtag #LiveVoyageReport.