In an effort to expand its operations in Burma, Pandaw Cruises has announced it is constructing a brand-new class of river cruise vessel that has been designed expressly to go where no others can: deeper into Burma, up the Chindwin and further up the Irrawaddy – year-round.

Pandaw Kalaw will feature a draft of less than 3 feet when she debuts, allowing her to explore more of Burma. Illustration courtesy of Pandaw Cruises.

Pandaw’s new K-class vessels, currently under construction, will feature a draft of just 80 centimeters – less than 3 feet. Draft is the vertical measurement of how much of a ship’s hull exists below the waterline. On an oceangoing cruise ship, it’s not uncommon for ships to have drafts that exceed 25 feet. Most European-based river cruise ships have drafts that hover around the 1.6 meter (or 5 foot) mark.

The decision to create these innovative vessels, named Kalaw Pandaw and Kindat Pandaw, came about because of the increasing congestion on the Pagan to Mandalay run as other operators commence operations in the area, noted for its mysterious history and abundant natural beauty. 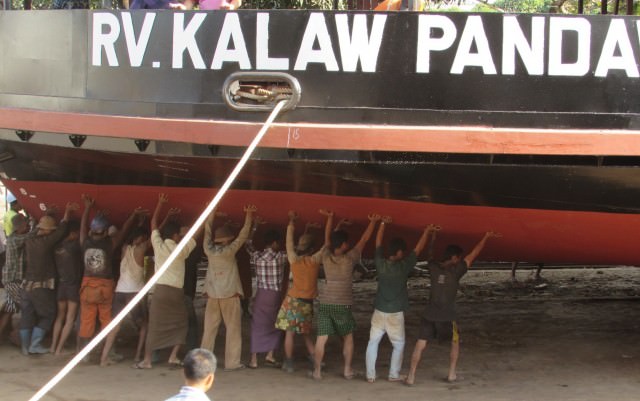 The shallow depth of Kalaw Pandaw’s keel can be seen in this shipyard photo. Photo courtesy of Pandaw Cruises.

Each two-deck ship will feature just 20 deluxe staterooms, along with a choice of indoor or outdoor bistro-style dining, complemented by an interior décor scheme that emphasises traditional motifs. Both vessels will feature the same intimate onboard experience as their other fleetmates.

Outfitting on the first ship, Kalaw Pandaw, is slated for completion in May – well ahead of the ship’s up-river deployment in July. Her sister ship, Kindat Pandaw, will follow three weeks later.

More information on Pandaw Cruises can be found by viewing our comprehensive line profile here on River Cruise Advisor.