We’re moving upriver on the Rhine. Our river cruise on A-ROSA Silva started in Frankfurt (see day one of our voyage), brought us to Heidelberg for a visit to Heidelberg Castle and the Old Town (see day two of our voyage) and landed us today in Kehl, Germany, where the attraction is actually in another country, Strasbourg, which is, of course, in France, and boasts the famous Strasbourg Cathedral. Construction began in the 12th century on Strasbourg Cathedral, which was completed in 1439. © Ralph Grizzle

The cathedral is widely considered to be among the finest examples of high, or late, Gothic architecture. At 142 meters (466 feet), it was the world’s tallest building from 1647 to 1874, when it was surpassed by St. Nikolai’s Church in Hamburg. Today it is the sixth-tallest church in the world and the highest still-standing structure built entirely in the Middle Ages. One of the biggest attractions at the Strasbourg Cathedral is its famous astronomical clock. © Ralph Grizzle

Described by Victor Hugo as a “gigantic and delicate marvel” and by Goethe as a “sublimely towering, wide-spreading tree of God,” the cathedral is visible far across the plains of Alsace and can be seen from as far off as the Vosges Mountains or the Black Forest on the other side of the Rhine. Sandstone from the Vosges used in construction gives the cathedral its characteristic pink hue. The Cathedral was once the World’s Tallest Building, surpassing the Great Pyramid of Giza. © Ralph Grizzle

The distance between the river bank where A-ROSA Silva was docked and the celebrated cathedral, the effective center of Strasbourg, was about six miles. That’s about 30 minutes by A-ROSA’s complimentary bus excursion (due to traffic and the fact that busses can’t park at the cathedral) — but only 25 minutes by bicycle. 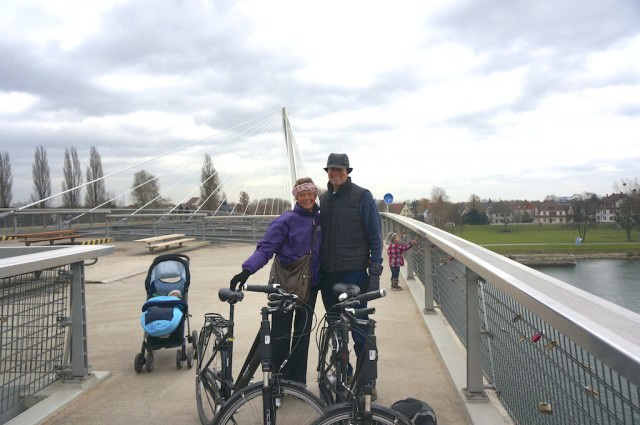 We pedaled across the Rhine from Germany to France and into Strasbourg. @ 2013 Ralph Grizzle

We pedaled using A-ROSA’s complimentary bicycles, following well-marked bikeways and locking our bikes at the cathedral, where one of Strasbourg’s many Christmas Market was in full swing. 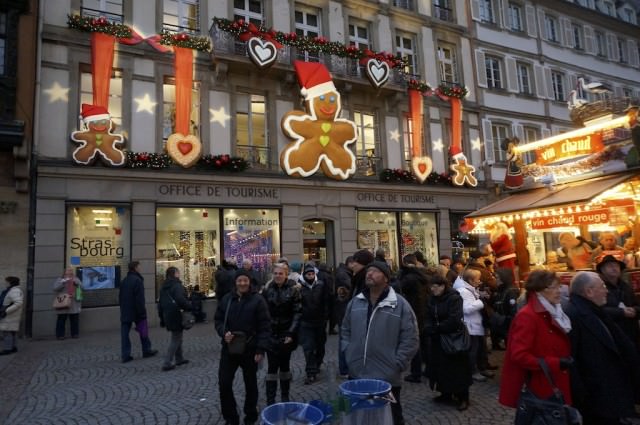 All done up: Christmas Markets in Strasbourg. @ 2013 Ralph Grizzle

By the end of the day, Strasbourg ranked as my favorite city for Christmas Markets. In fact, while there is a sprawling Christmas Market at the cathedral, there are a number of other, smaller markets throughout the city. 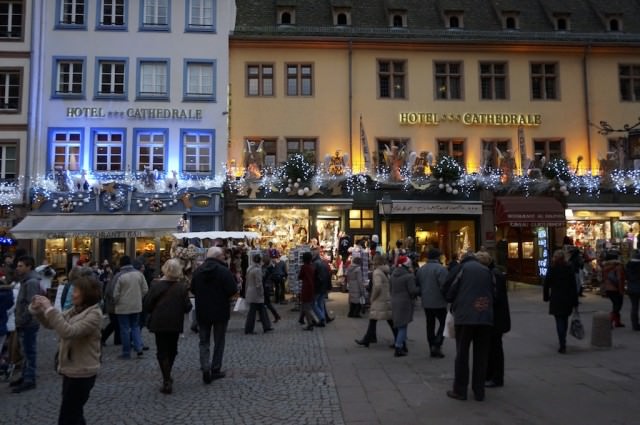 Even the exteriors for the hotels were decorated for Christmas in Strasbourg. @ 2013 Ralph Grizzle

We enjoyed walking around the city, breathing in the festive air (the smell of mulled wine and fresh-baked bredle, a traditional Alsatian Christmas cookie) and admiring the decorations, done up with French flair, different from what I had seen in Germany on this trip and what I had seen in Austria and Hungary on other Christmas Market cruises. Back on A-ROSA Silva the consensus, in fact, seemed to be that Strasbourg was a favorite among the Christmas Markets. 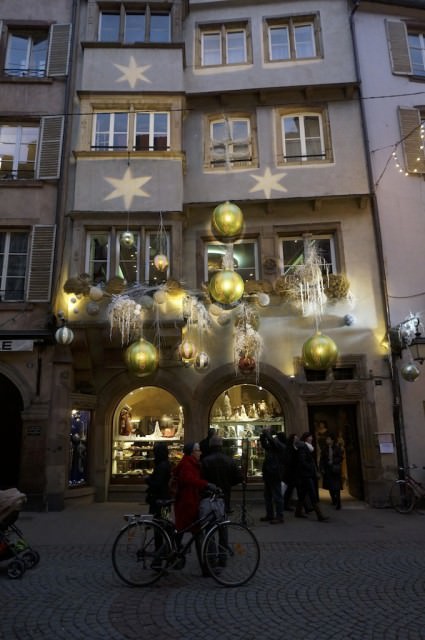 Christmas with a French flair in Strasbourg. @ 2013 Ralph Grizzle 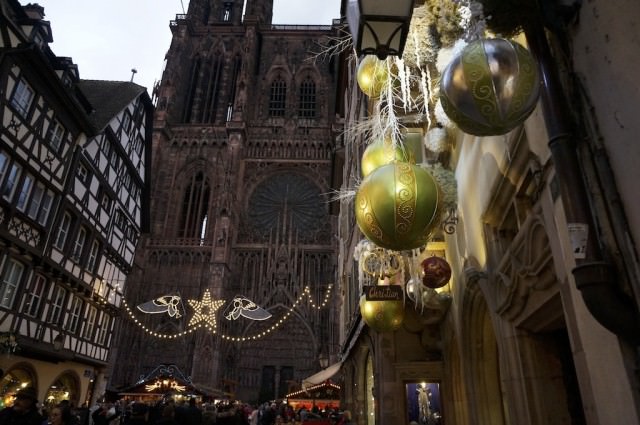 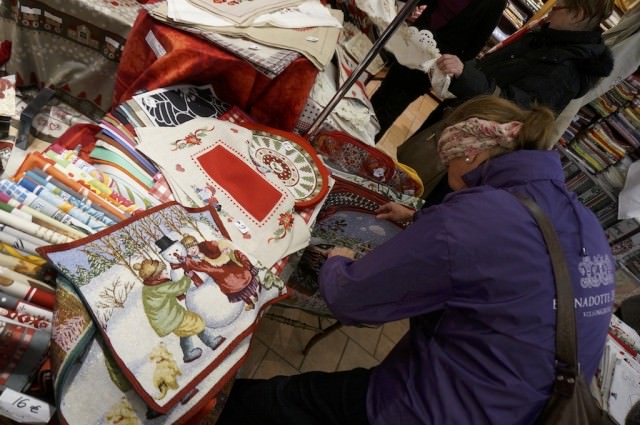 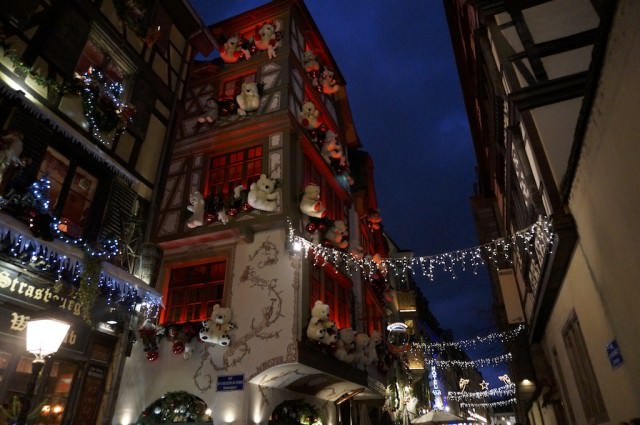 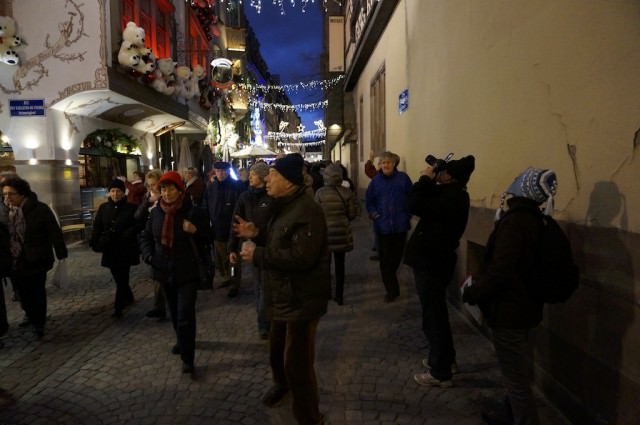 As we’re docked in Kehl, I shouldn’t completely ignore the German city. Kehl switched hands between France and Germany several times, and even switched religions — quite frequently it would seem, between Catholic and Lutheran, which must have been quite a jolt to the congregations who were present on the day on the switch.

Until 1519, Kehl was Catholic, part of the diocese of Strasbourg. Then, Kehl became Lutheran. That lasted until the French occupation in the 1690s when it became Roman Catholic again — only to revert back to Lutheranism later.

In the 1600s, three centuries after the first permanent bridge joined Kehl and Strasbourg, the French seized their neighbor and made it a fortress. By the end of the century, Kehl was returned to Germany.

Kehl and Strasbourg continued their dance, splitting apart and reuniting throughout the years. The fortress was dismantled, however, a port facility was developed, and in 1861, a new railway bridge allowed for the first direct connection between Paris and Vienna. Alas, the French took control of the harbor during the First World War, and during the Second World War, Kehl was turned into a suburb of Strasbourg. In 1953, Kehl went back to Germany — for good, we can hope.

Today, the Passerelle Pedestrian Bridge joins the two cities, and we crossed that bridge on our bikes to get from A-ROSA Silva to Strasbourg — and back. Strasbourg was beautiful during winter. The historic city center, the Grande Île (Grand Island), was classified a World Heritage site by UNESCO in 1988. 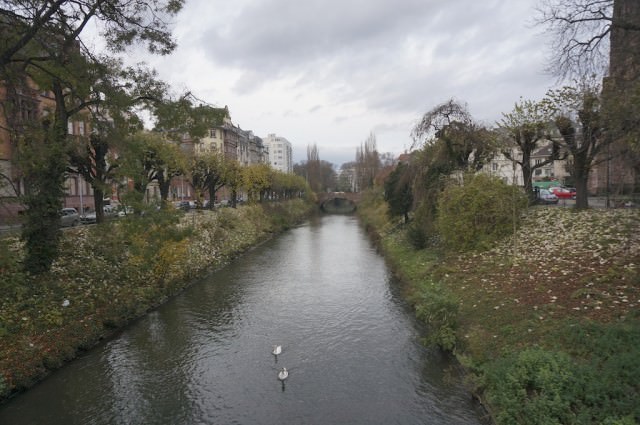 Even in winter Strasbourg is beautiful. @ 2013 Ralph Grizzle

Someone asked me recently to name my favorites places in the world. Europe, I answered without hesitation, and more specifically, France. From Normandy to Nice, from Bordeaux to Alsace, France has all that I need for a lifetime of travel. I particularly love Strasbourg. Maybe it’s the mix of German-French influence, but I suspect it’s something more, something in my blood perhaps.

Though I can trace back my family history for nine generations, the chain is broken in the early 1700s. My ninth-generation grandfather stepped ashore in America in 1722, but we don’t know where he came from. Some in the family have said Alsace, the region over which Strasbourg presides. I’ve visited the city several times searching for my roots. See Searching For Family Ties In Strasbourg: The Story Of A Serendipitous Encounter

I’ve yet to discover if John Grissell came from Strasbourg or the region around it, but if he did, that would be quite okay with me. Strasbourg for me is more than a significant city on the Rhine. It feels a bit like coming home. Perhaps it is. 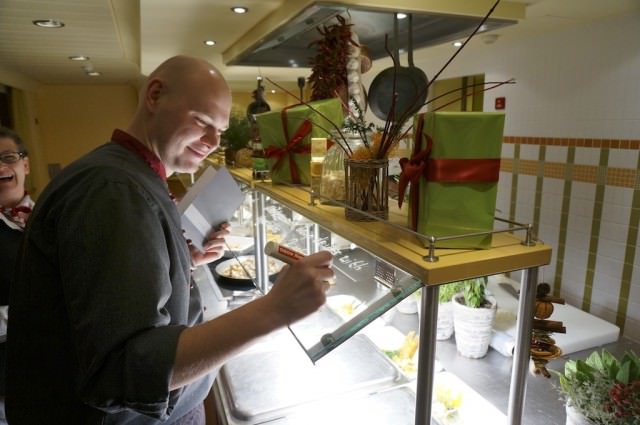 The Ultimate River Cruising Handbook is available in print and digital formats. The book includes 2019 pricing charts for all rivers and all major river cruise companies. Get your copy now.
END_OF_DOCUMENT_TOKEN_TO_BE_REPLACED