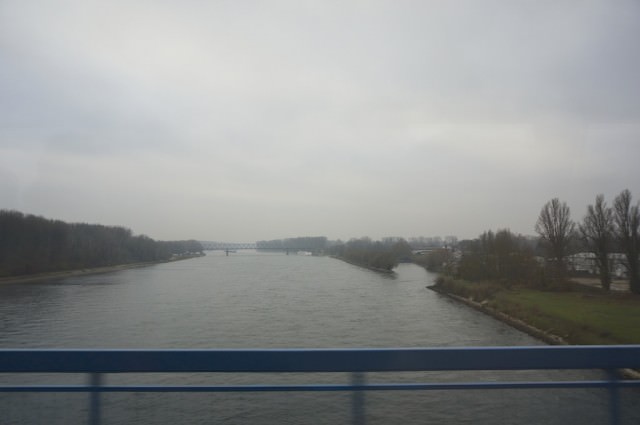 A gray day on the Rhine. A-ROSA Silva is docked at the second bridge, barely visible in the photo. © 2013 Ralph Grizzle

Due to intermittent internet access along the Rhine yesterday, this Live Voyage Report appears one day late.

After leaving Frankfurt yesterday, we cruised along the Rhine overnight. The purr of A-ROSA Silva’s engines and the river lapping against the hull lulled me to sleep. Plus, the healthy after-dinner pour of red wine probably helped to hasten my slumber and keep me fast asleep throughout the night.

Morning, I opened the stateroom blinds to reveal a gray day. The distinction between river and sky was subtle, the two appearing to blend together. The forest across the river was opaque and mysterious in the thick and chilly morning mist. I pulled on a sweater and jeans, laced up my waterproof walking shoes, and Monica and I headed to the restaurant for breakfast.

Breakfast is something to look forward to on A-ROSA Silva. The morning meal is served buffet style, with a cook-to-order egg and omelette station — and other hot selections. I opted for a bowl of muesli, topped with pumpkin seeds, flaxseeds, walnuts, figs, prunes, natural yogurt and a bit of honey. That, along with a glass of juice and a perfectly prepared cafe latte hit the spot. For good measure, I had a couple of fried eggs and some fresh fruits to hold me through the morning, as we’d be touring Heidelberg and would not be back for lunch until 1:30 p.m.

I find A-ROSA’s restaurants to be particularly attractive, with floor-to-ceiling windows that allow diners to enjoy the passing scenery (or stationary scenery if the vessel is docked). Tables are set for eight or fewer, with a few booths for those who prefer intimate settings. The dining room is situated on Deck 3, which allows for higher ceilings and larger windows than you might find on other river cruise ships, where restaurants typically are situated on the lower decks.

We were docked less than an hour away from Heidelberg, in Germersheim and not in Speyer, as had been promised on our itinerary. Captains of river cruise vessels, as well as those who handle the tours, must be flexible, as docking stations can change from time to time on river cruises. We were disappointed not to be in Speyer, but A-ROSA Silva did provide complimentary transfers between the ship and the city for those who wanted to visit this significant city on the Rhine.

For the moment, however, we were preparing to join the complimentary excursion to Heidelberg. We bundled up and stepped off A-ROSA Silva into the gray day and a temperature of 30F (-1C). After about 45 minutes on the bus, as a guide narrated about the region along the way, we reached the outskirts of Heidelberg. Our guide told us that the Heidelberg University (the oldest in Germany) is the largest employer, providing work for 12,000. Roughly one of every five Heidelbergians is a student, he added, noting that of Heidelberg’s 149,000 residents, 35,000 are students. 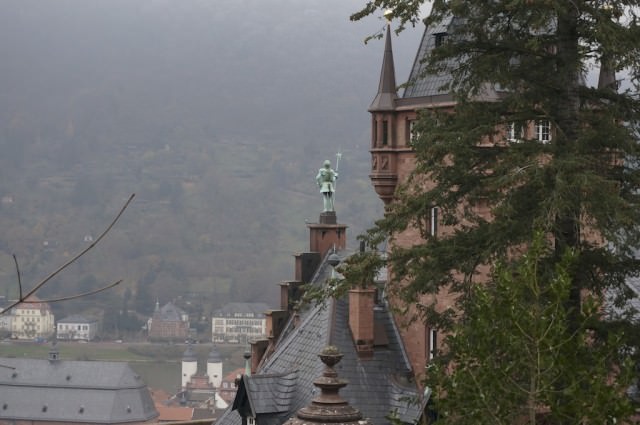 We toured Heidelberg Castle and the baroque style Old Town. We learned that Mark Twain spent time in Heidelberg and wrote of his adventures in “A Tramp Abroad,” a book whose appendix includes one of my favorite essays, The Awful Germany Language. 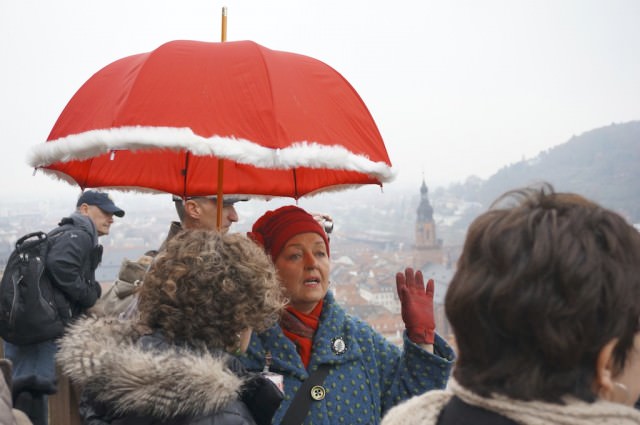 Our wonderful tour guide, Marlies Ida Klamp, informed us and made us laugh while touring Heidelberg. © 2013 Ralph Grizzle

Twain tried to learn German at the age of 15 and tried again 28 years later in preparation for his trip to Europe. His essay expresses the frustrations of an American attempting to learn to speak German. 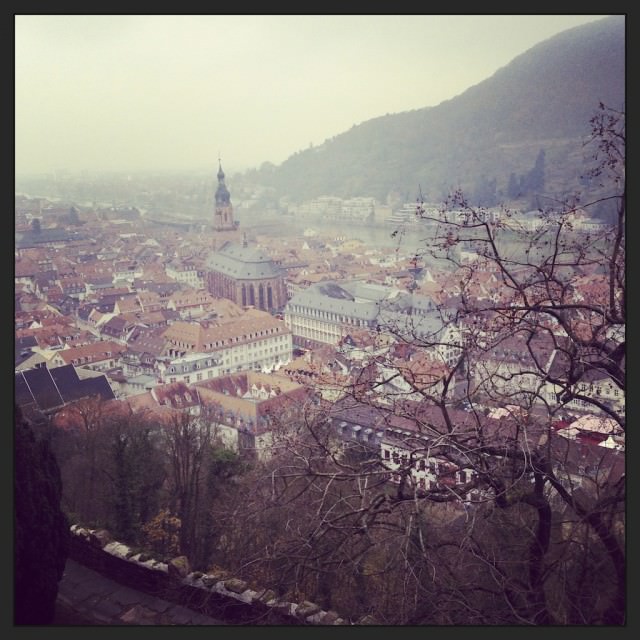 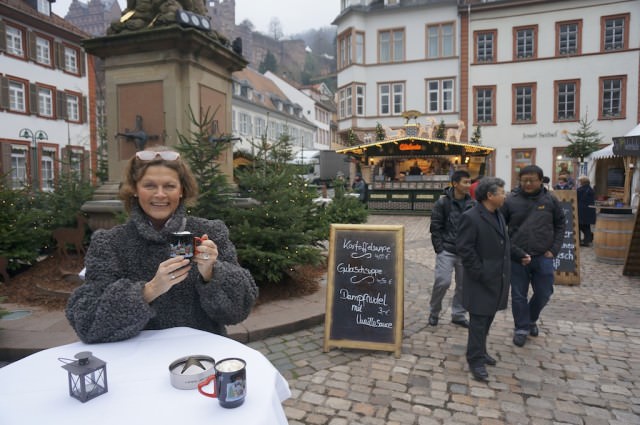 Warming up with a cup of hot chocolate at Heidelberg’s Christmas Market. © 2013 Ralph Grizzle 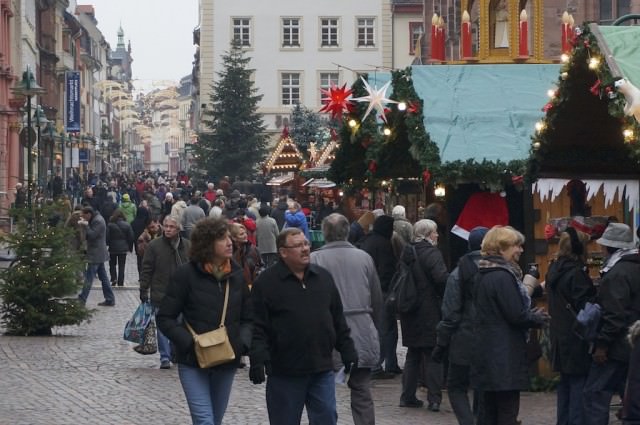 After touring Heidelberg for a few hours, we returned to A-ROSA Silva, still in Germersheim. Again, crew extended a warm welcome back on board and requested that we stick our hands under the hand-sanitizer for a spritz of disinfectant, “extremely important after visiting the Christmas Markets,” we were told. It was good to know that A-ROSA was taking such precautions seriously. No one wanted to contract Norwalk Virus or the flu while there was so much to be enjoyed on this cruise.

Lunch was a buffet once again, featuring fresh salads and a variety of hot items that included delicious Butter Fish, chicken and beef. Again, I was impressed with the friendliness of the crew. Their warmth contributed to an amiable atmosphere on board.

The dining room had been beautifully prepared, with white tablecloths and bouquets of red roses arranged in globe-like shapes (for the dinner service, stemmed white roses were placed in vases on the table). 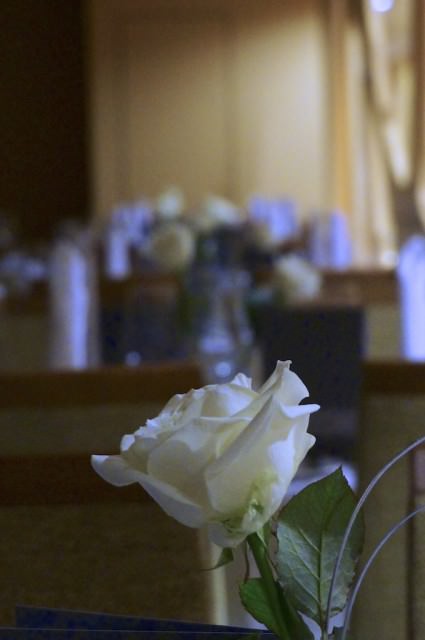 Service at all times was attentive and highly polished. During lunch, when we ordered Pepsi the waiter asked if we would like ice and lemon, then returned with bottles, pouring the Pepsi into our glasses and placing the screw top back on the bottle and giving it a twist — to keep it fizzy he said. It was a small gesture, but one that illustrates the staff’s attention to detail.

It’s clear that A-ROSA is striving for a high level of service, and in fact, the company responsible for marketing A-ROSA in North America, David Morris International, has a history of working with such luxury lines as Crystal Cruises, Silversea Cruises and Cunard Line, and thus is bringing some of the refinements found on luxury cruises to A-ROSA.

I should point out that I am a guest on A-ROSA Silva. I paid my own way to get to the ship, but I was not charged the cruise fare. This is common practice in the travel industry. I am on what is called “an individual press trip,” as opposed to a group press trip. Companies want experienced journalists on board their ships to write about and evaluate the experiences. My goal is to help cruisers make informed decisions by describing the experiences, the good and the bad, to the best of my abilities.

After lunch, Monica and I walked along the Rhine. My Strava iPhone app told me that we logged 2.6 miles in 45 minutes. It was a beautiful walk, with barges pushing upstream and others going with the flow downstream. The naked limbs of trees contrasted against the muted pastel sky, as the sun was beginning to set just just after 4 p.m. Swaths of birds undulated along the river and into the forests. It was a beautiful winter’s day. 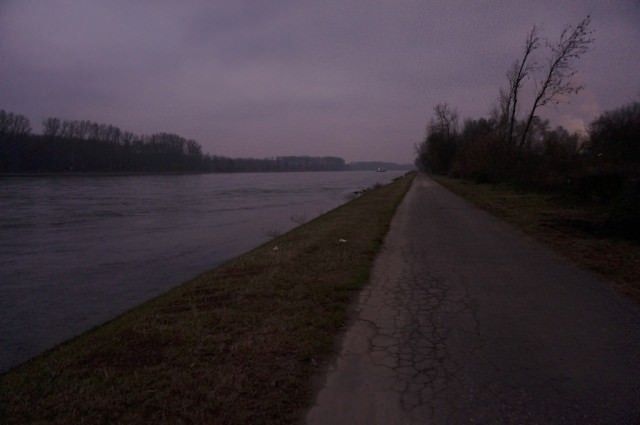 A late afternoon walk on the Rhine. © 2013 Ralph Grizzle

We stepped back on A-ROSA Silva, returned to our rooms and donned our bathrobes. Before dinner we would spend 30 minutes in the sauna, a large and beautiful facility with windows looking out onto the river.

One interesting sidenote relates to the size of A-ROSA Silva’s fitness center. With its sauna, fitness area, treatment rooms and relaxation room, the space occupies considerable real estate, the largest such space on any river cruise vessel (along with its sisters, which feature similar facilities), A-ROSA execs told me. That space, in fact, could have held eight cabins and the revenue that those cabins would bring, execs added. But A-ROSA decided that it would like to offer its guests the relaxation and fitness opportunities that a well-equipped spa and fitness center could provide. A top-deck heated pool complements the fitness facilities so that guests can have a complete spa and fitness experience. 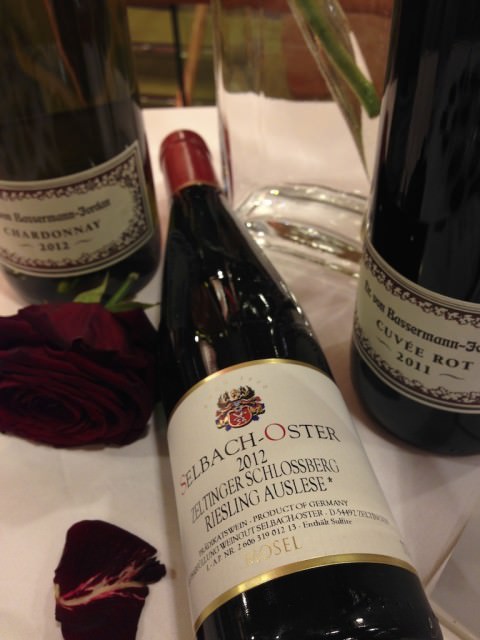 At around 7 p.m., we sat down to enjoy a five-course “Welcome” dinner, with complimentary wines from the Palatinate region surrounding us. Our dinner menu featured Mousse of Risp Tomatoes followed by Tartar of Scottish Salmon with Pan Fried Scallop and Marinated Cress Salad.

Those were delicious starters, and they were followed by a Truffled Beef Bouillon with Morrels. The main course was Veal Loin Wellington with Port Wine Jus Herb Moussline and Glazed Carrot Flowers. The affair ended with American Style Cheesecake with Passion Fruit Sorbet, delicious. 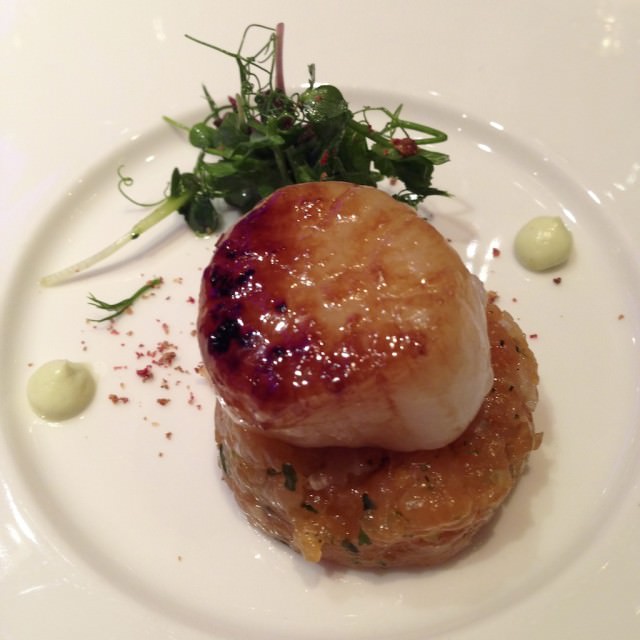 Sufficiently sated, we headed up to the top deck at around 10 p.m. to walk a few rounds before retiring. The night air was cold, the sky, cluttered with stars. It was quiet except for the gentle rush of the river and the purring of the engines. A-ROSA Silva was pushing her way upriver toward Strasbourg and the next day’s adventure.

We could hardly wait to begin a new day.

The Ultimate River Cruising Handbook is available in print and digital formats. The book includes 2019 pricing charts for all rivers and all major river cruise companies. Get your copy now.
END_OF_DOCUMENT_TOKEN_TO_BE_REPLACED