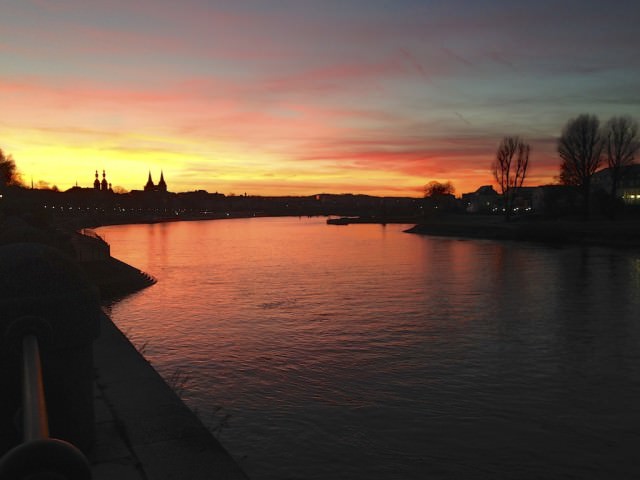 I begin today’s post with the end: a gorgeous sunset at the confluence of the Moselle and Rhine rivers in Koblenz.

The photo does not do justice to a scene that took our breath away as a few dozen of us stood at the Deutsches Eck, the German Corner, named thus because it is at the very tip of where the two rivers meet. I and the others stood there for nearly 30 minutes snapping photos and trying to capture the beauty of what we were witnessing.

It is a task impossible for amateur photographers like me, and I suppose equally challenging for professional photographers. Perhaps that is the thing: You just have to be there and see it for yourself and etch it into the best image capturing device known to man, the human eye, committing the scene to memory, another experience chalked up on what has been one wonderful voyage on A-ROSA Silva. 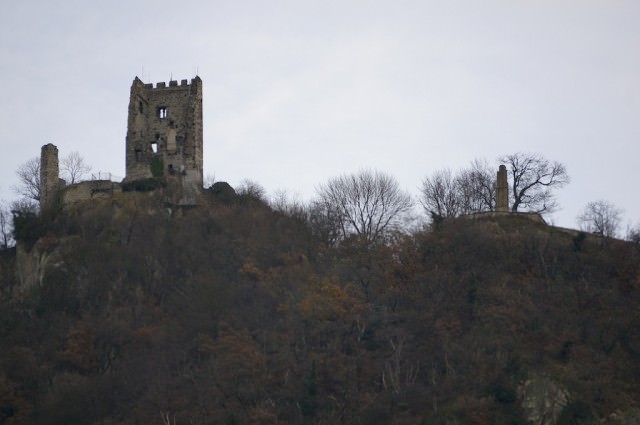 Our day began with an early morning departure from Cologne. Many of A-ROSA Silva’s guests had stayed out late to walk the city past midnight, when the crowds were gone and the cathedral majestic as ever in the evening. Experiences, captured by the human eye.

A-ROSA Silva departed Cologne at 6 a.m. We cruised the Rhine, past castles and fortresses, meandering with the river toward Koblenz. 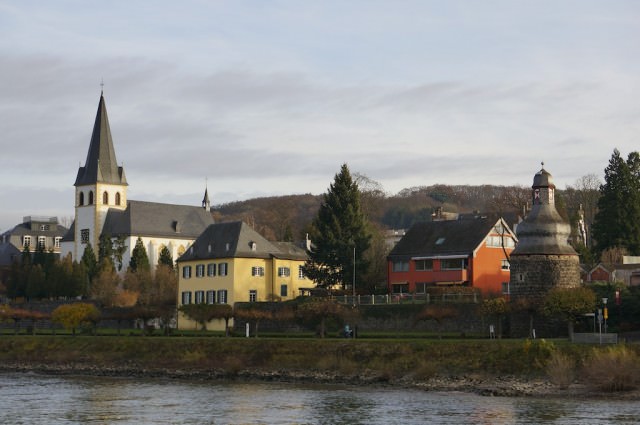 As the gray sky gave way to blue, A-ROSA Silva sailed past charming villages , floating along peacefully and quietly on this beautiful day in December. For those who wanted to learn more about stories along the Rhine, there was a lecture in the morning, followed by something that caught my interest: an Apple Strudel making demonstration — with samples. I don’t think I saw anyone in the packed lounge refuse the small slice of Strudel that was offered. 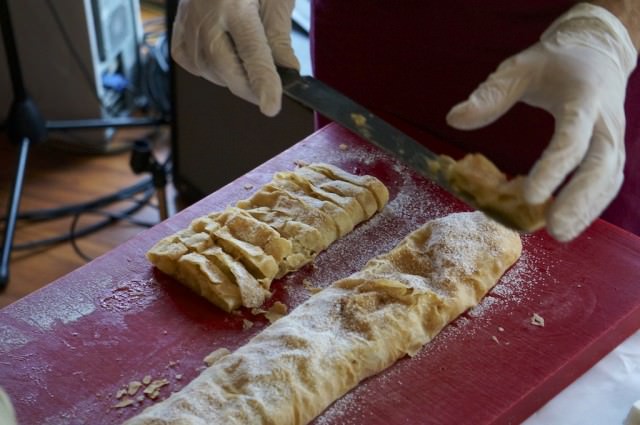 No shake and bake here: Made from fresh ingredients, Apple Strudel. © 2013 Ralph Grizzle 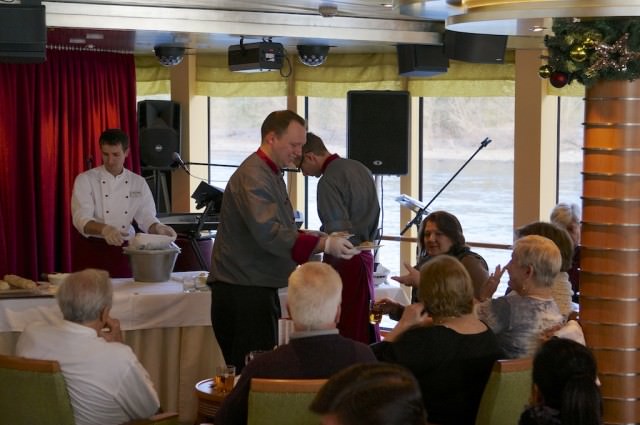 At around 2 p.m., we began our approach to Koblenz, a lovely city situated at the confluence of the Moselle and Rhine rivers. Soon, we were docked within steps of the old town, and groups of guests gathered to join A-ROSA Silva’s complimentary walking tours.

As with the other ports of call on our cruise, I had visited Koblenz several times, so of course I asked for a bicycle so that I could pedal out into the wine-producing region along the Moselle River. 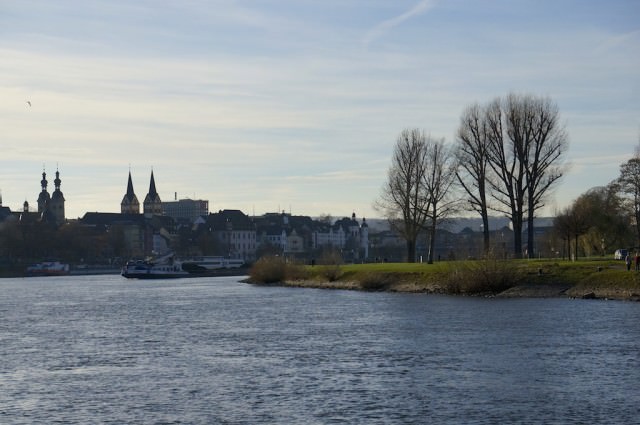 This was the best day of cycling thus far on a trip where I had pedaled in Frankfurt, Strasbourg and Cologne — although those were great bike trips too.

The dedicated bike roads in Koblenz traveled along the river, then meandered through open land and alongside the vertical vineyards along the Moselle. I felt a sense of euphoria pedaling along the beautiful countryside. 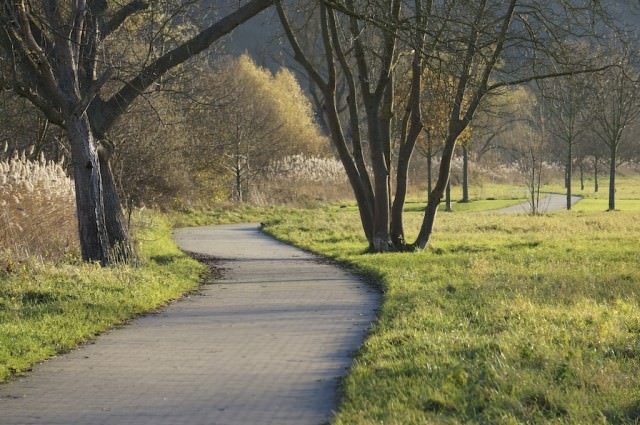 Pedaling along the Moselle. © 2013 Ralph Grizzle

Though I had seen them before during the harvest season, I was surprised at just how steep the vineyard slopes were. Despite the angle of the slopes, however, all the grapes here are hand-harvested here, I was told. I snapped a photo of a trolley-like device on rails that went straight up the mountains, to transport the grapes, I suppose. Whatever its purpose, it was an impressive scene. 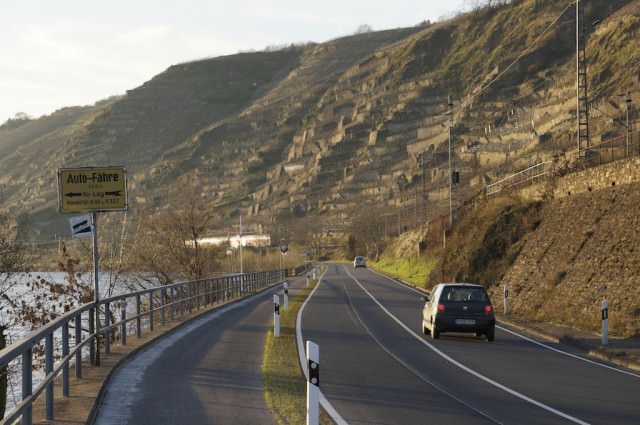 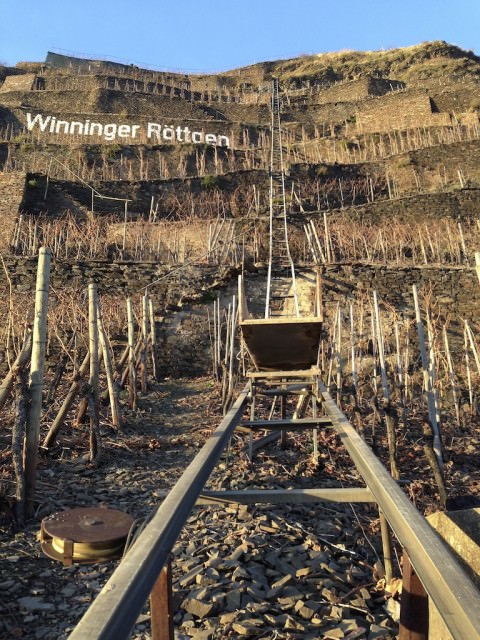 A trolley system for harvesting grapes on the Moselle. © 2013 Ralph Grizzle 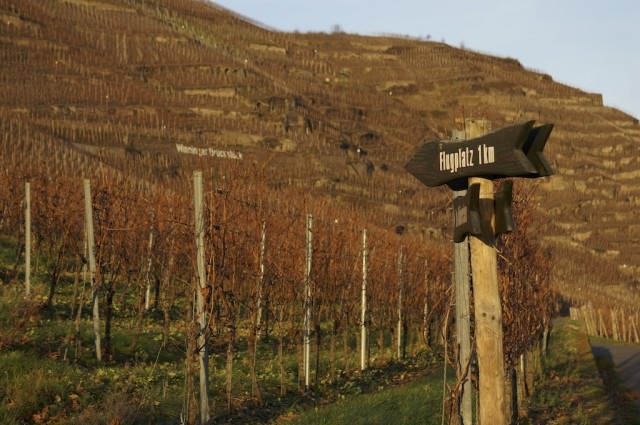 After pedaling for nearly 7 miles (about 11 kilometers) I reached a small town, Winningen, where I stopped for Apple Strudel, my second helping that day — hinting at something akin to addiction.

I was the only tourist in town, I believe, and I had a nice discussion with several of the locals about where I was from and what I was doing — a crazy American out for a bike ride — in December. 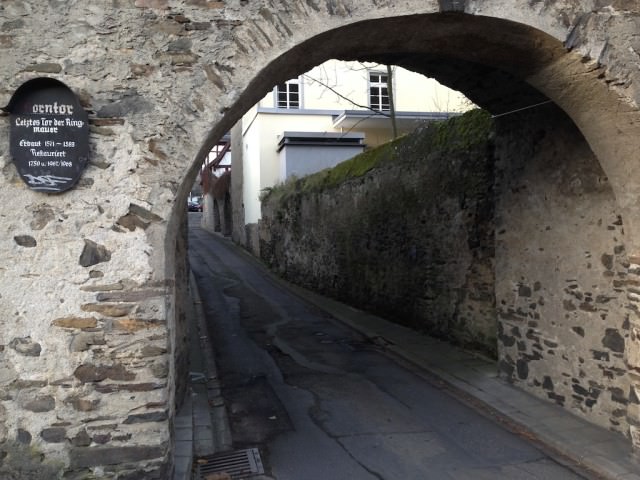 An old town wall on the Moselle. I headed through and into town. © 2013 Ralph Grizzle 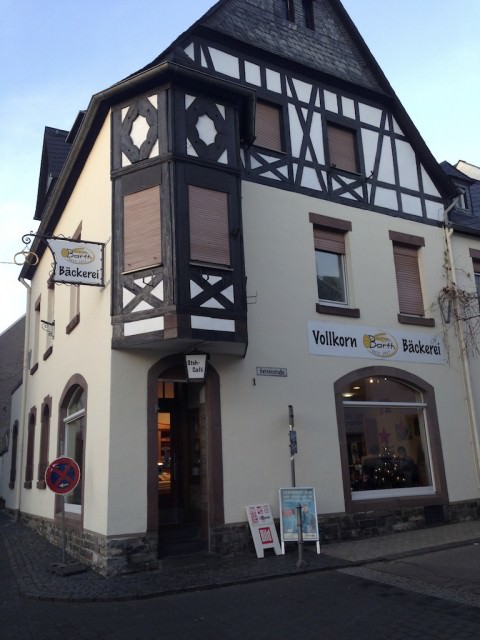 The bakery on the Moselle. © 2013 Ralph Grizzle

All throughout Germany, and most of Europe, there is good signage for bikes, so that getting lost would be something you would need to commit serious effort to. What if I had a flat tire? No problem. I’d simply wheel my bike to a train station, always nearby it seemed, and travel by rail back into town. Worst case, I’d call the ship. The phone number is inscribed on the back of my boarding card. Tip: Always take your boarding card with you when you leave the your river cruise vessel. 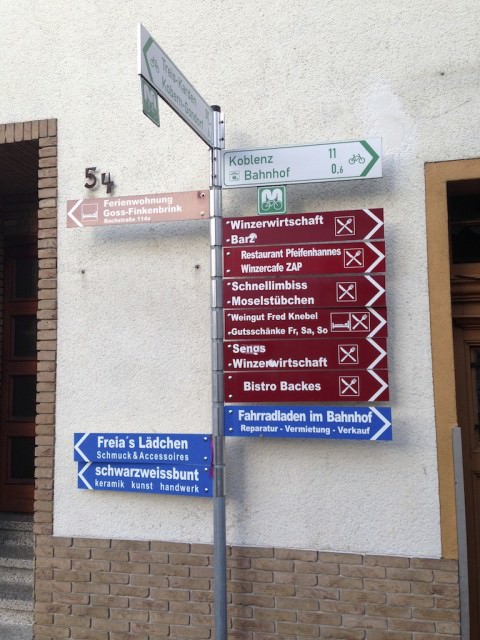 I pedaled for about an hour before arriving back at A-ROSA Silva. Before boarding, I spent time at the German Corner snapping photographs on the sunset, then returned to A-ROSA Silva to shower and prepare myself for dinner, a Bavarian buffet with pretzels, white sausages and more types of cabbage that you could imagine. It was delicious, and I was happy to enjoy food authentic to Germany. All of our dinners thus far have been excellent, paired with wonderful wines, but the “comfort food” on my last night of my cruise was much appreciated. 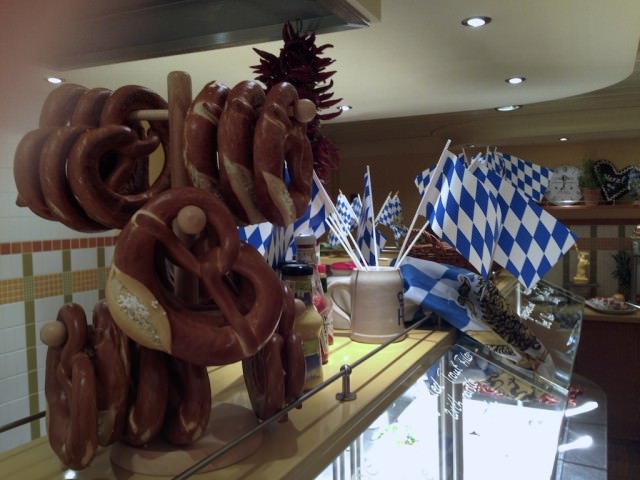 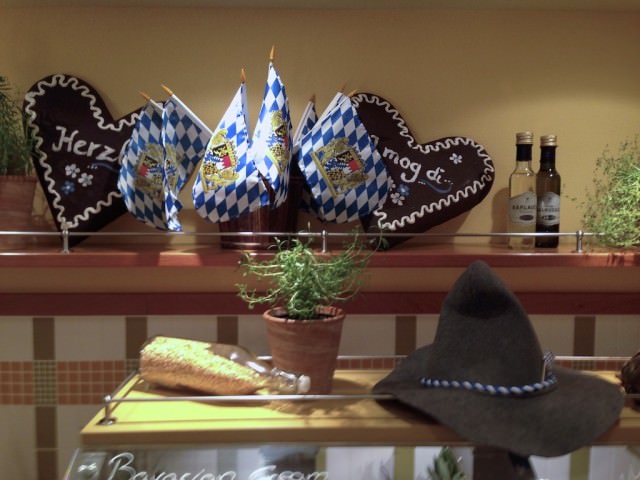 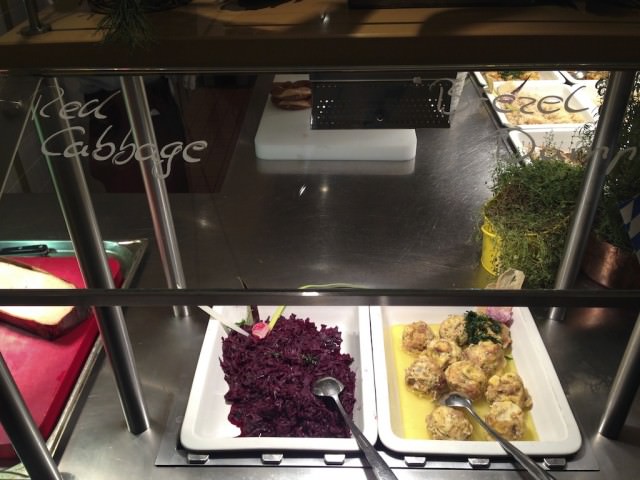 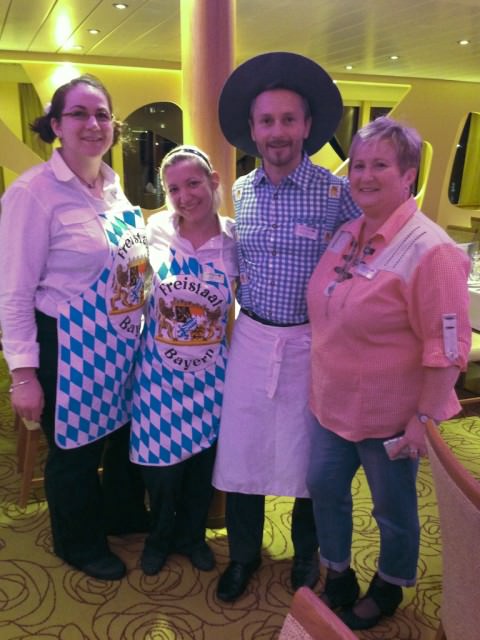 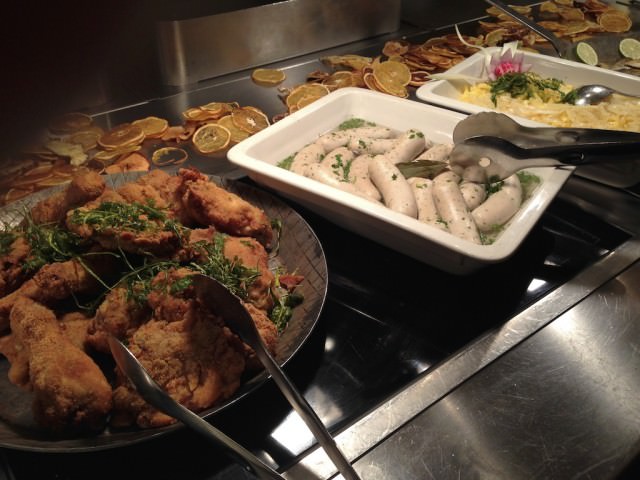 I leave A-ROSA Silva Tuesday afternoon to make my way to Frankfurt airport and my next adventure, to Antarctica. What a change of pace — and of place. No cycling, no easy days along the river, none of the charm of Europe, but something else — raw, extreme, exposed and exhilarating, I am sure.

I am happy that my day in Koblenz ended with such a beautiful sunset. It seemed to be an appropriate ending to a wonderful cruise on A-ROSA Silva along the Rhine River (and a touch of the Main River). The Christmas Markets were fun and festive, but even without them, I love traveling in Europe this time of year, when the crowds are lacking but the festivity of the season bountiful.

I’ll have one more report from A-ROSA Silva tomorrow to wrap things up, but by the time you read it, I’ll be somewhere over the Atlantic, bound for Buenos Aires and a new adventure — a new set of experiences and of images that I will share with you and others that will be impossible to capture.

As best as possible, I will put the experience into words, but, of course, you know that to truly experience the beauty and feeling of such a place as Koblenz or Antarctica, you have to be there for yourself. 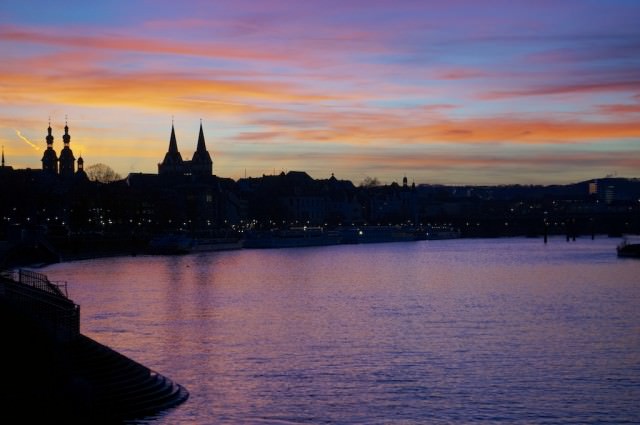