CroisiEurope’s Belle de Cadix isn’t like other river cruise ships. To look at her, however, you’d be hard-pressed to describe the difference. It’s only when you take a look at the line’s Cruise the Guadalquivir and Guadiana Rivers itinerary that the difference becomes immediately apparent. 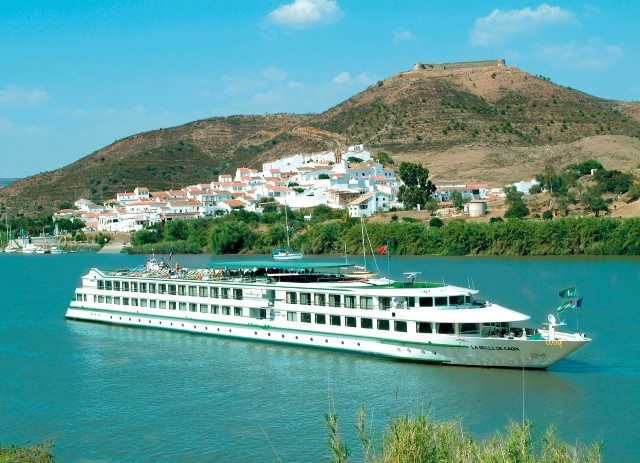 River cruise companies that operate along both the Guadalquivir and Guadiana waterways are few and far between to begin with, but CroisiEurope takes its eight-day journey from Seville to aboard Belle de Cadix to another level by swinging out into the open Atlantic for part of the itinerary.

Beginning in Seville, guests can enjoy an overnight stay onboard the Belle de Cadix before setting sail the next morning, enabling them to take in some of Spain’s legendary nightlife. 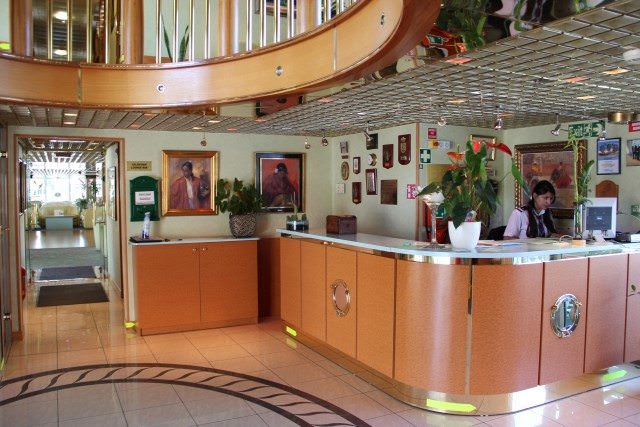 Public areas aboard Belle de Cadix are attractively decorated to create a welcoming environment onboard. Photo courtesy of CroisiEurope.

The next morning, guests will have the opportunity to enjoy guided touring around some of Seville’s most famous highlights – or remain on board, if they chose. Belle de Cadix sets sail in the afternoon, arriving in Cadiz in time for dinner. During this journey, the ship is actually out in the ocean, albeit near the coast line of Spain. If she were a traditional river cruise vessel, such a journey would be impossible. But instead of a long overland journey by coach, guests can sit back and enjoy the views during an afternoon of scenic cruising.

Seville is one of the most photographic cities in Spain. Photo courtesy of Wikipedia / Creative Commons

In Cadiz, an optional excursion is made to Jerez, where a trip will be made to a local ganaderia where bulls are raised. Spain is, of course, famous for the “Running of the Bulls” ceremony that takes place each July in Pamplona.

If bulls aren’t your thing, you can also elect to partake in an excursion to a local wine cellar and join in a tour of Cadiz and Sanlucar de Barrameda, followed by an equestrian show. An evening aboard the Belle de Cadix is remarkably ocean liner-like, as the ship casts off in the evening bound for Alcoutim.

Here, Belle de Cadix turns around and sails the opposite way across the ocean in order to venture up Portugal’s Guadiana River. Once in Portugal, guests will be able to visit and explore Alcoutim and Vila Real de St. Antonio, all on the same day. You can even take an optional excursion to Faro, Portugal – the country’s southernmost city and home to a striking mix of classical and modern architecture.

The streets of Faro. Photo courtesy of Wikipedia / Creative Commons

Another unique feature of this weeklong itinerary is the ability for guests to travel overland on a full-day excursion to Gibraltar that includes a guided tour of the peninsula (complete with its resident Barbary ape colony) and, of course, the Rock of Gibraltar.

Belle de Cadix then returns to Seville for two days of exploration, including a day spent touring Granada, Spain – a picturesque city that has origins dating back to the 5th Century.

CroisiEurope offers this unique itinerary aboard Belle de Cadix on departure dates ranging from April 3 to October 9, 2014. If Spain and Portugal are on your bucket list, this is certainly one of the most unique ways to get to experience the heart of both. 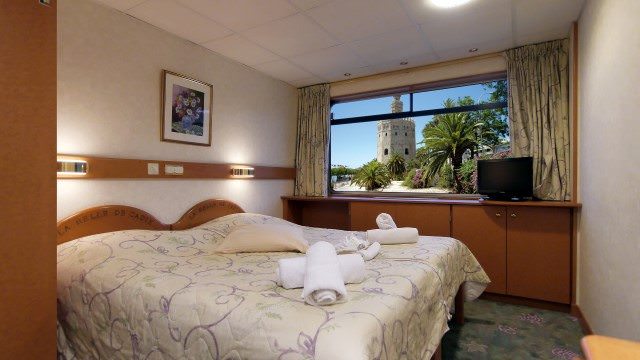 All staterooms aboard Belle de Cadix feature views of both rivers – and the ocean. Photo courtesy of CroisiEurope.

More information on CroisiEurope and Belle de Cadix can be found by viewing our complete CroisiEurope company and fleet overviews here on River Cruise Advisor.