You are here: Home / Lifestyle / Tips & Advice / How Low Is too Low? Assessing Ceiling Heights on River Cruise Ships

The other day, we received a question from a reader. It’s a question that, frankly, we’re surprised hasn’t come up before this, but one which is worth addressing here on River Cruise Advisor:

I am 6’8″ tall, and am concerned that I would encounter too many short ceilings, doorways, etc. on river cruise ships. No one can seem to provide vertical dimensions for rooms, corridors, common areas on these ships. Can you?

If, like me, you stand under 6 feet tall, you’ve likely never even thought about ceiling heights and thresholds before. But for our reader, whose nose is nearly in the stratosphere, it’s a very reasonable concern. After all, unlike regular cruise ships, river cruise ships are heavily restricted in terms of height, length, width and even draft below the waterline. 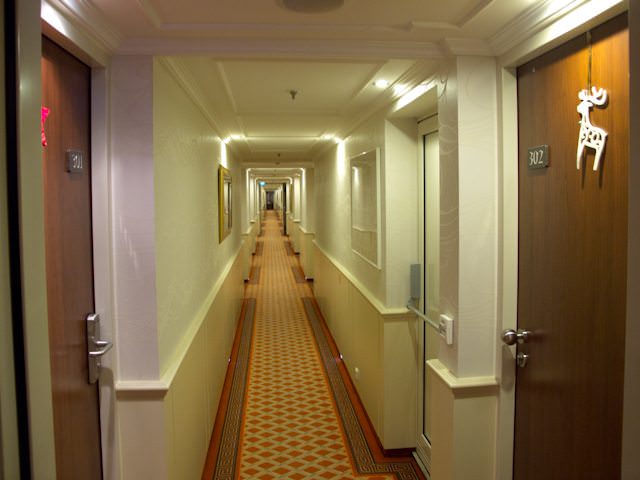 A reader asked how high ceilings are aboard river cruise ships — and we found out. Photo © Aaron Saunders

Our initial research confirmed what he had already discovered: Information regarding ceiling heights is non-existent. Even the PR professional I contacted at one of the river cruise lines admitted she wasn’t entirely sure, and would have to check with the design team.

I did, however, find one quote from the design team that worked on Uniworld’s S.S. Antoinette. They were describing the chandelier that has been a much-remarked on focal point of the ship — and the fact that it stands 2.5 meters in height, or 8.5 feet.

If the quote is accurate — and there’s little reason to think it isn’t — then the average ceiling height aboard most river cruise ships is likely 2.1 meters, or 6.88 feet.

Too low for our reader. 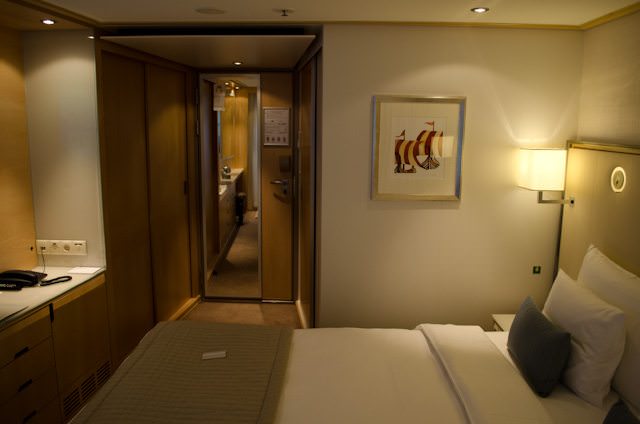 They’re gorgeous rooms, but it’s worth noting that the entryway of staterooms aboard the Viking Longships have a ceiling that drops down an inch or two lower than the main room. Photo © 2013 Aaron Saunders

Even if our reader were content to duck coming in doorways and the like, he may also find other obstructions. As beautiful as Viking River Cruises’ new Viking Longships are, they have a drop-down ceiling in the entryway of each stateroom that conceals the air conditioning ventilation. It’s only a few inches lower than the rest of the stateroom ceiling, but for our reader, that might be a deal-breaker.

We heartily recommend river cruising for everyone, as it’s a spectacular way to see the world. However, extra tall people may feel cramped on some river cruise vessels.

Our very own Ralph Grizzle is 6’5″, and he says he never feels any more cramped on a river cruiser than on any other vessel. He does complain about being clean only “from the nose down” because he can’t get his head under some of the showers on both river cruisers and ocean cruisers, but recently on AmaPrima he was pleased to find a rainforest showerhead that he could stand under with an inch to spare.

We hope our extra tall reader has the same sort of luck on his river cruise.