You are here: Home / Cruise Companies / AmaWaterways / AmaPrima / 12 Things To Like About The New AmaPrima 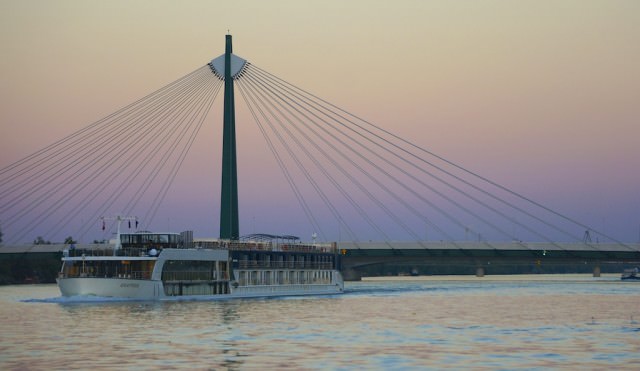 Coming from Bratislava, AmaPrima makes her way to Vienna. I boarded for five days, enough time to discover 12 things to like about AmaWaterways’ newest vessel. @ 2013 Ralph Grizzle

After a much-welcomed thunderstorm last night, we stepped off AmaPrima this morning in Vilshofen, Germany, ending five days on board AmaWaterways‘ newest vessel and temperatures in Austria and Germany that were often above 90F.

The storm started as we were enjoying a gala dinner in Erlebnis, AmaPrima’s gourmet restaurant, situated aft and featuring gourmet cuisine, wonderful wines and panoramic views — all at no extra charge. Indeed, dining in Erlebnis was one of the highlights of our voyage from Vienna to Vilshofen.

It was, in fact, a voyage filled with highlights. Here are 12 that stand out. 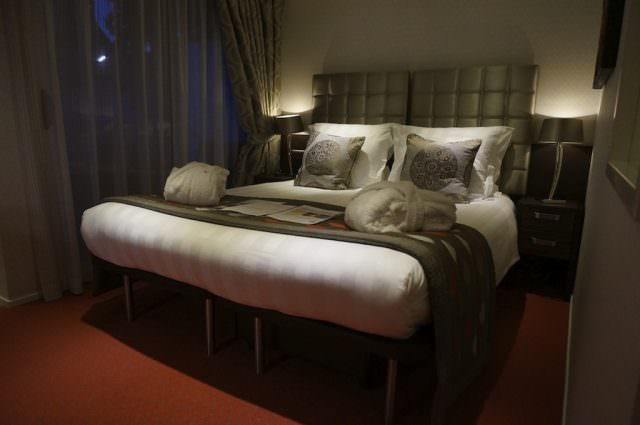 We enjoyed stepping into a spacious stateroom, measuring 235 square feet with step-out and French balconies, and a large marbled bath with rainforest shower. We had plenty of storage space, and enough shelving in the bathroom to avoid clutter — and maintain harmony between couples. 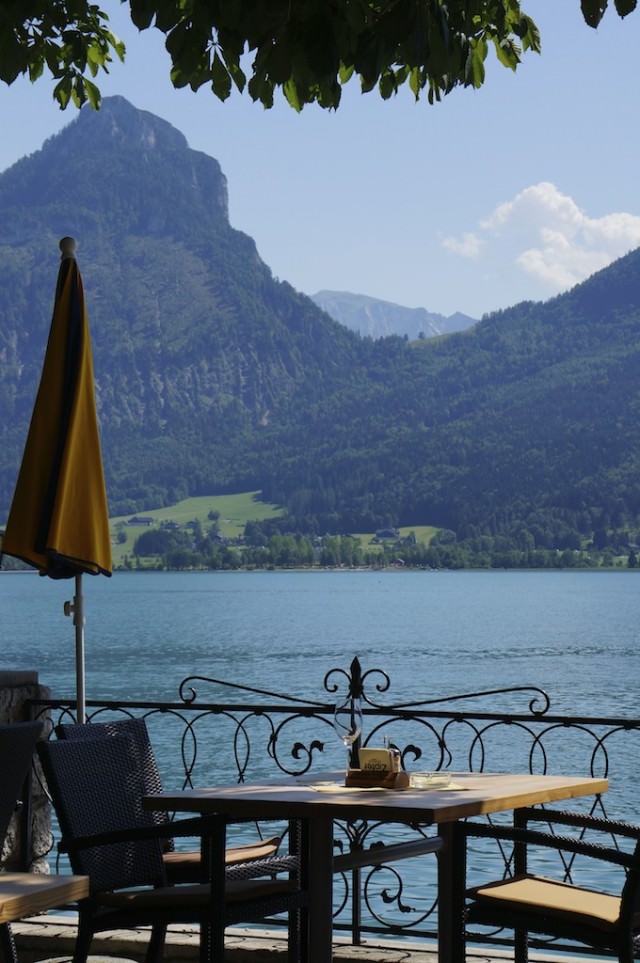 At a table overlooking the Wolfgangsee we had a coffee and Apfelstrudel against a beautiful mountainous backdrop while on a complimentary tour from Linz offered by AmaWaterways. @ 2013 Ralph Grizzle

At every destination where AmaPrima docked, we had the choice of several shore excursions. If we had been on an ocean cruiser, we would have each paid $200 or more for some of these excursions, such as one we did when AmaPrima docked in Linz. There, we visited Austria’s Lakes District, a 7.5-hour tour that you can read about here: Slideshow: Ashore, On AmaPrima – Beautiful Countryside.

3. Bicycles provided at no charge. 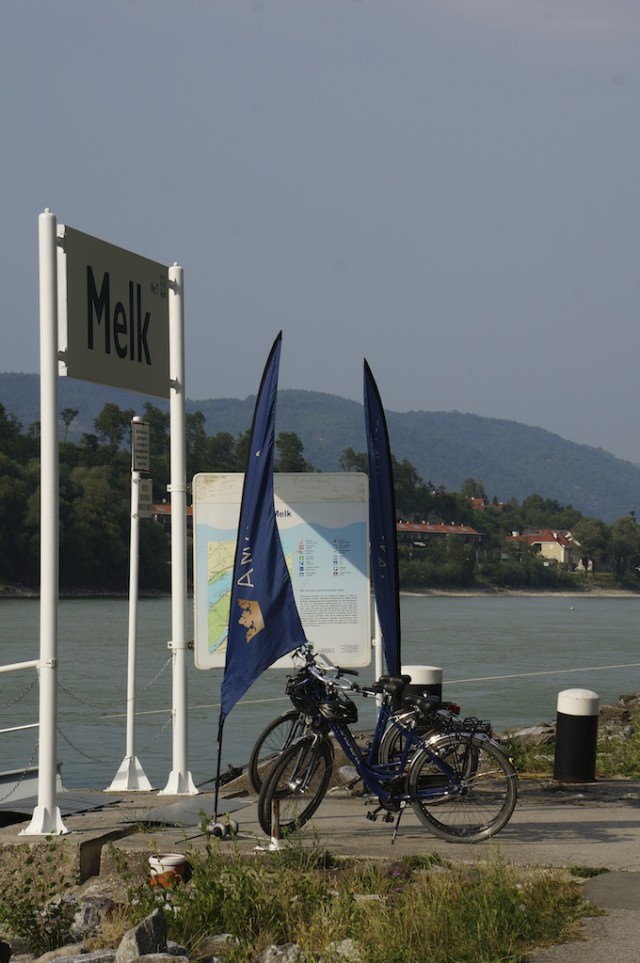 AmaWaterways makes bicycles available at no extra charge. We pedaled every day during our voyage, an active and efficient way to see the attractions and beauty along the Danube. @ 2013 Ralph Grizzle

It was fun to step off AmaPrima, straddle a saddle and go off pedaling bicycles through vineyards and valleys. The bikes were in new condition, with adequate gearing and trustworthy brakes, important when descending hills.

The European bicycling infrastructure is so far superior to that of the United States that any comparison would be ludicrous and embarrassing. We pedaled along dedicated bike roads for most of our journeys ashore. The few times we had to join the highway, we did so with bike-aware drivers. See Ashore, On AmaPrima – Bicycles Free Of Charge

AmaPrima also features a fitness center with stationary bicycles for those who prefer to stay active indoors. 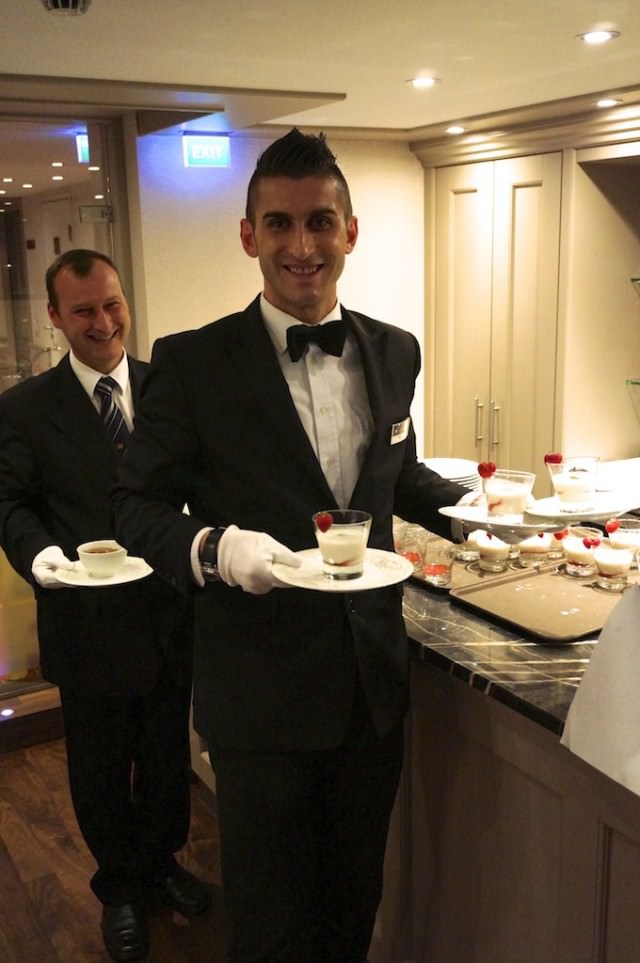 AmaPrima offered two dining options: the main restaurant, situated forward on Cello Deck, and Erlebnis, situated aft, with panoramic views. Neither charged extra for dining, unlike the speciality restaurants on some cruise ships.

Both restaurants featured unlimited regional wine and beer — and this wasn’t the cheap stuff. For example, we  enjoyed sipping on Grüner Veltliner produced in Austria’s Wachau Valley while cruising through the Wachau Valley. It’s hard to imagine getting more local than that.

We also learned from Primus Perchtold, AmaWaterways’ executive chef, that the company sources only the best meat and seafood. Lamb comes from New Zealand, fish comes fresh from the North Sea and beef, well, where else? It comes from the United States, Nebraska to be precise and from a premier supplier, Greater Omaha Packing Company, featuring Certified Black Angus Beef.

Primus has experience as a chef on Cunard Line and Hapag-Lloyd’s Europa, which ranks in some guidebooks as the world’s highest rated luxury line. He’s also the winner of three gold medals at the European Championship of Culinary Art in Nuremberg, Germany, so you can count on a dining experience on AmaPrima.

We also enjoyed Erlebnis, located at the rear of AmaPrima on Violin Deck, just below the Sun Deck. We experienced the type of service, cuisine and wine that you might expect to fine on a luxury cruise ship. 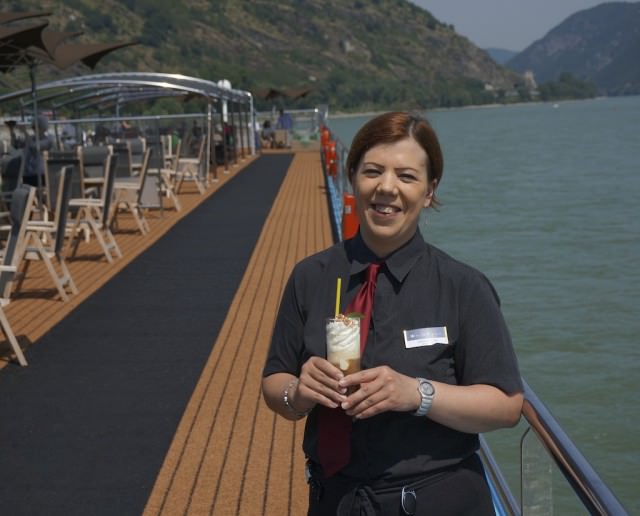 Ever-gracious and friendly, Reka, from Hungary, serving complimentary iced coffee on the sun deck during our transit from Durnstein to Melk. @ 2013 Ralph Grizzle

Kristin Karst, executive vice president and co-owner of AmaWaterways, is quick to praise her staff, and while she notes that every cruise line should be able to say that it has great staff and service, she adds that service on AmaWaterways is something that has to be experienced to fully appreciate. Certainly, the friendly staff and their service were among the things we appreciated while we were on AmaPrima. 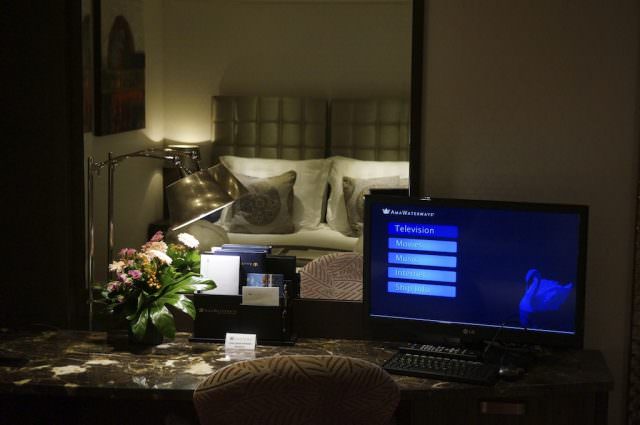 The flat panel television features free movies and internet, while the desk doubles as a dressing table. @ 2013 Ralph Grizzle

I was glad not to have to log in/log out or worry about per-minute charges when using WiFi. Those not traveling with internet-enabled devices can access the web and watch new-release movies on their stateroom televisions, free of charge. 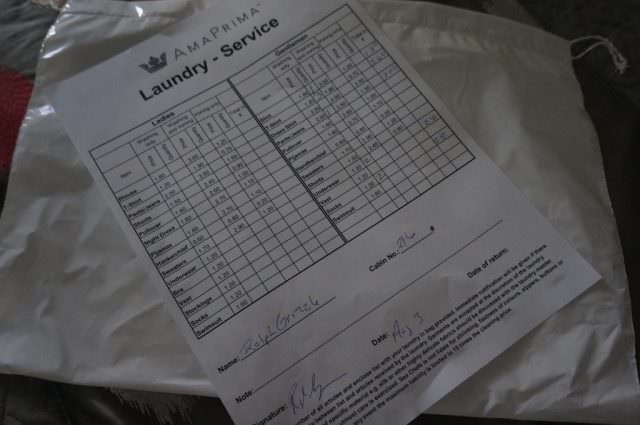 Why can’t ocean cruisers do it this well? Laundry service, cheap and returned the same day, usually in the afternoon. @ 2013 Ralph Grizzle

Some cruise lines charge a small fortune for laundry service. And if you want same-day delivery, you’ll often pay a surcharge on top. AmaPrima’s laundry service in inexpensive and delivered quickly, same day, and often in the early afternoon. 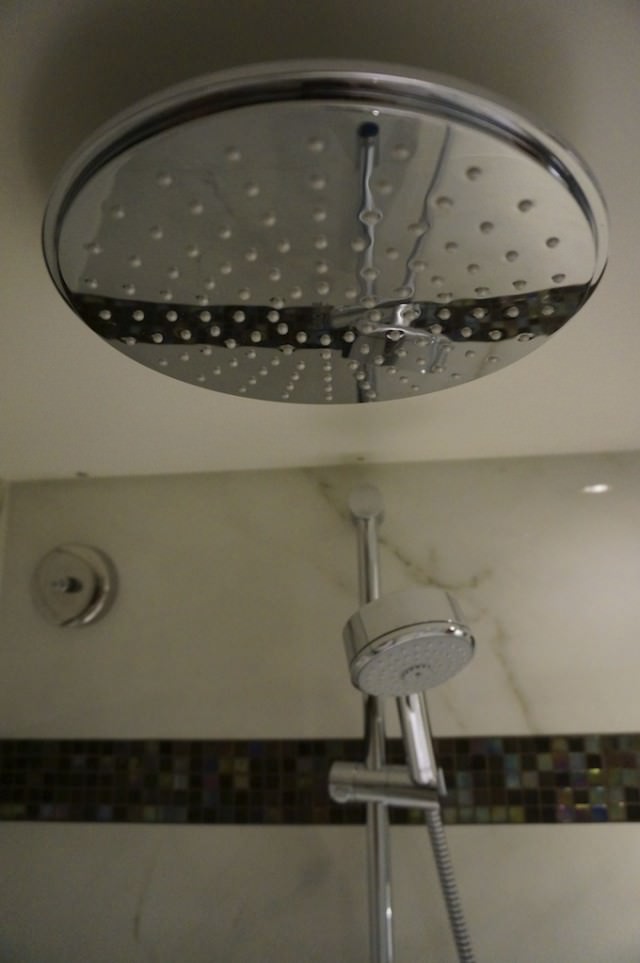 At 6’5″, I appreciate a shower that I can stand under. 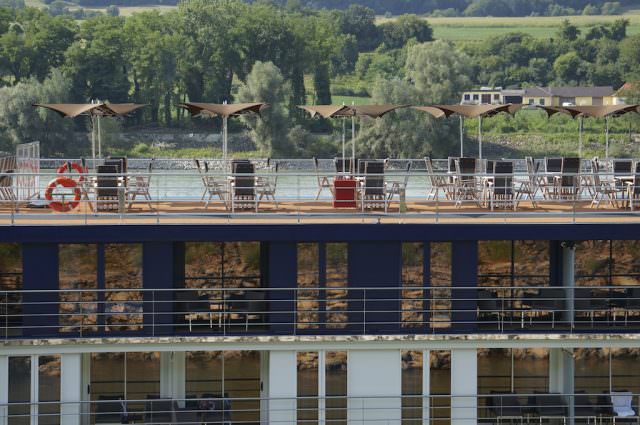 The staterooms on the two decks just below Sun Deck feature two balconies, a step-out balcony and a French balcony. @ 2013 Ralph Grizzle

I’m a big fan of AmaWaterways’ twin-balcony concept. The twin balconies span the stateroom’s entire exterior wall, with one balcony featuring a sliding-glass door and the other featuring a full step-out balcony. The French balcony is simply a glass door that you can open for fresh air and views along the river — and with an interior sitting area. The step out balcony features an exterior sitting area, with two chairs for enjoying the views. 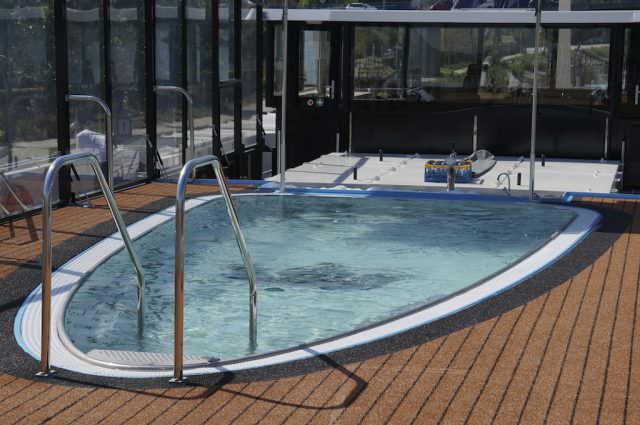 AmaPrima features a pool, not quite big enough for a swim but great for cooling off. There’s even a swim-up bar at one end. 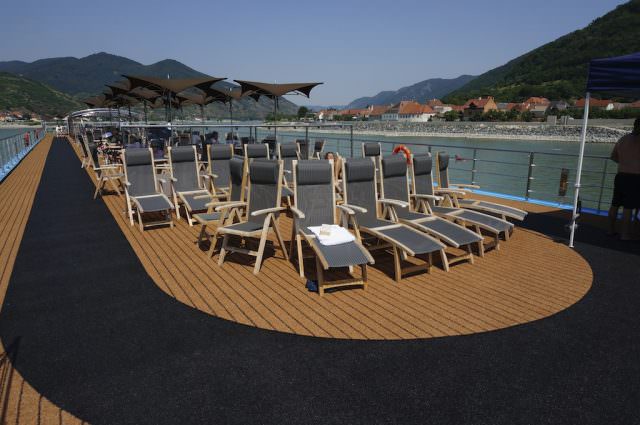 The Sun Deck on AmaPrima features a running track and lots of sitting areas, in sun or in shade. It’s a nice location to be when cruising along the river so that you can watch the landscape of Europe pass by. 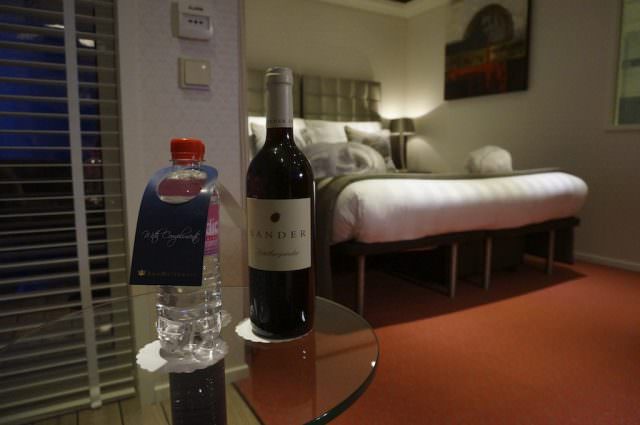 AmaWaterways includes bottled water as well as wine and beer during lunch and dinner. @ 2013 Ralph Grizzle

You won’t pay for much more than your cruise fare on AmaWaterways. Nearly everything else is included: bottled water; speciality coffees, soft drinks, juices, regional wines and beer during lunch and dinner; most tours; WiFi and internet access; new release movies in your stateroom; bicycles for using ashore; dining in the speciality restaurant; and more.

Our time on board AmaPrima felt like river cruising the way it should be done.

You may also want to see: