You are here: Home / Destinations / Europe / Germany / Frankfurt / Five Things To Do In Frankfurt

At some point on your river cruise adventures, chances are you will find yourself in the German city of Frankfurt. While a handful of cruises begin and end here, most visitors will end up connecting through Frankfurt Airport, Europe’s third-busiest.

Whether you have several days here, or merely several hours, here are five of our favorite things to do in this easily accessible city:

The interior of MyZeil, the architecturally stunning shopping center along the Zeil. Photo courtesy of Wikipedia.

One of the busiest shopping streets in the city, the main portion of the Zeil functions as a pedestrian zone that runs between the Hauptwache and Konstablerwache squares. In fact, you can take the U-Bahn train direct from Frankfurt Airport to Hauptwache Station and be walking the Zeil in exactly 13 minutes (we timed it).

Along the Zeil, you’ll find all the shops you could possibly want, along with some of Frankfurt’s strikingly modern architecture. There’s also a wide assortment of restaurants ranging from American chains like Pizza Hut to more, shall we say, fine dining.

The Alte Oper, or Old Opera, was constructed in 1880 as an opera hall but suffered severe damage during bombing raids at the height of World War II. During the next 40 years, it was rebuilt slowly until its opening in 1981.

Today, Alte Oper is worth visiting for the magnificent architecture and sumptuous interior design alone, but if you have the time, consider taking in a concert or performance here – even if it is in German. The experience will be well worth the price of admission.

3. Enjoy Dinner with a View 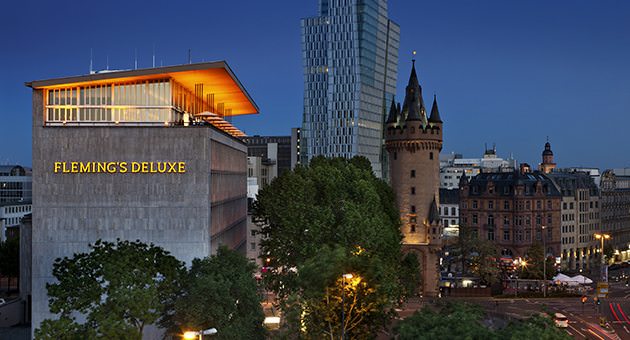 There’s nothing like dinner from the 7th floor of the Fleming’s Deluxe Hotel Frankfurt City. Photo courtesy of Fleming’s Hotels.

Not too far from the Hauptwache station is the Flemings Deluxe Hotel Frankfurt City, a staunch favorite of ours when we’re staying in the city thanks to its spacious rooms and unique, continually operating Paternoster lift.

But the real gem lies on the 7th Floor: the Fleming’s Club Terrace and Bar, which features both indoor and outdoor seating overlooking Eschenheimer Tower, one of the remaining medieval gates erected during the 15thcentury. Don’t have long? Pop up here for one of Germany’s famous beers; you won’t regret it.

4. Head to the Historic Railway

The Frankfurt Historic Railway is a must for train buffs. Photo courtesy of Wikipedia / Creative Commons.

The Historische Eisenbahn Frankfurt is an absolute must for train buffs. Founded in 1978, the Museum is dedicated to the preservation of historic steam locomotives made in Germany. But these are no stationary, showroom-only display models. These steam engines actually run, bringing Germany’s proud rail engineering past to life once again. 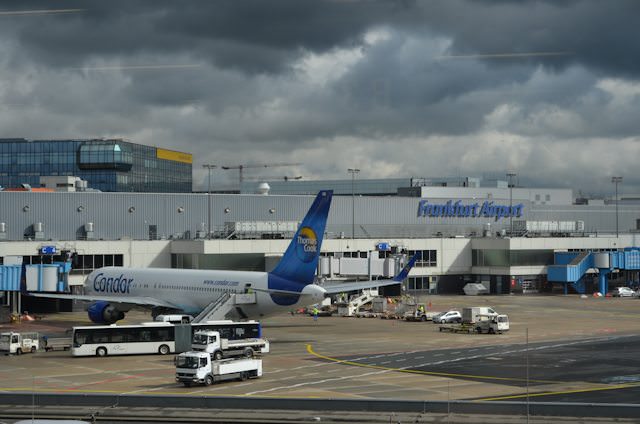 Did you know Frankfurt Airport has a dedicated roofside terrace? Photo © Aaron Saunders

It may sound odd, as most of us want to get away from the airport, but the Visitor’s Terrace at Frankfurt airport is one of our favorite excursions in Frankfurt. Open between April and November, guests can have a close-up view of this busy European hub from the open terrace that sits atop Frankfurt’s Terminal 2.

Admission for adults, 5 euros, with family prices that start at 14 euros.