Although the situation on the waterways of Europe continues to improve, there are some new stumbling blocks as regions affected by the worst flooding seen in centuries begin to clean up.

A stretch of the lower Danube has been closed south of Budapest, and two locks — the Gabcikovo Lock between Budapest and Bratislava, and the Altenworth Lock located between Vienna and Melk, have been closed for repairs. Repairs on both locks are scheduled to be completed by Wednesday, June 19, and Thursday, June 20, respectively, though the time schedule remains subject to change. 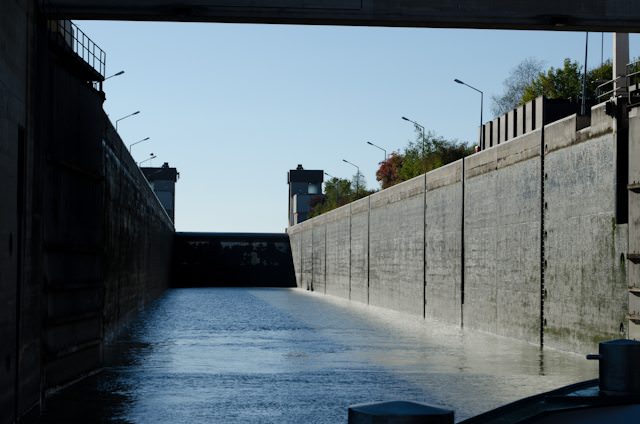 Locks are now the problem along the Danube as the cleanup from some of the worst flooding in recent memory begins. Photo © 2012 Aaron Saunders

A few new updates to pass along today:

Uniworld Boutique River Cruises has been forced to cancel the June 16 sailing of the River Ambassador due to the aforementioned closure of the lower Danube south of Budapest, and the closure of the Gabcikovo Lock that is situated between Budapest and the Slovakian city of Bratislava. The lock is currently undergoing repairs and is scheduled to open again to traffic on Wednesday, June 19.

Because of these closures, Uniworld has no ships it can position to Vienna for embarkation on June 16, which has forced the line to cancel the sailing. Guests will receive full refunds and a $500 credit to use on any European or Russian river cruise in 2013-15.

Uniworld says it is in the process of contacting affected guests.

Meanwhile, the June 16 sailing of the River Beatrice is scheduled to proceed on its Enchanting Danube voyage between Budapest and Passau, though the potential exists for slight deviations from the published itinerary. Uniworld has said it has contingency plans in place, if necessary, to operate this sailing.

Viking River Cruises also highlighted some of the operational concerns it faces in the region, which we have reprinted here verbatim along with a full list of affected sailings:

Austria: Altenwörth Lock According to the Austrian authorities, the Altenwörth lock, which is located on the Danube River between the cities of Vienna and Melk, was damaged during the recent flood. The lock is currently closed for repairs and is scheduled to reopen on June 20, 2013. Depending on sailing schedules, this closure may cause delays for those who are scheduled to be sailing in the area around June 20th, or may require switching of sister ships for those who are scheduled to be in the area before it reopens.

Germany: Danube River Between Regensburg and Passau Conditions continue to improve along the Rhine, Main, Main-Danube Canal, and most areas of the Danube. In Germany, between the cities of Regensburg and Passau, the water levels of the Danube River are still comparatively high. Depending on sailing schedules, this may cause some possible delays in the coming days and we will continue to monitor the situation and make any minor itinerary alterations, as needed.

1. June 14 Cities of Light (Prague to Paris) aboard Viking Prestige — This cruise is expected to proceed as scheduled.

2. June 15 Romantic Danube (Budapest to Nuremberg) aboard Viking Njord — This cruise will now begin on sister ship Viking Bragi (Longship, built 2013). The ship will not be able to reach Budapest, but will be waiting for guests in Esztergom, approximately 30 miles away. Viking representatives will meet all guests at the airport—regardless of whether or not air/transfers were purchased from Viking—and transport guests to the ship. There will also be a representative at the normal port of embarkation near the Chain Bridge in Budapest, along with transportation to the ship’s current docking location. Aside from the necessary change of embarkation port, this itinerary is expected to proceed as scheduled, with minor additional alterations if necessary. Viking is contacting guests of this cruise to alert them of these changes.

3. June 15 Romantic Danube (Nuremberg to Budapest) aboard Viking Idun — Guests will embark Viking Idun in Nuremberg, as scheduled. Depending on water levels there is a possibility that switching to a sister Longship may be necessary later in the week. Aside from the possible ship switch, this itinerary is expected to proceed as scheduled, with minor additional alterations if necessary.

4. June 16 Grand European Tour (Amsterdam to Budapest) aboard Viking Bragi — This cruise will now begin on sister ship Viking Tor (Longship, built 2013). Embarkation in Amsterdam and sailing along the Rhine River will proceed as originally planned. Guests will then spend two nights in a hotel in Nuremberg, Germany before being transferred to their original ship, Viking Bragi. The cruise will then again proceed as scheduled. Viking is contacting guests of this cruise to alert them of the anticipated itinerary modifications.

5. June 16 Grand European Tour (Budapest to Amsterdam) aboard Viking Skadi — This cruise will now begin on sister ship Viking Embla (Longship, built 2013). There is a possibility that the Altenwörth lock will affect Viking Skadi’s ability to continue sailing on the Danube River. It is expected that a ship switch will take place with Viking Skadi on June 26. After which the cruise itinerary will continue as originally planned. We anticipate that a full-day excursion to Heidelberg will take the place of originally scheduled sailing time. While guests are in Heidelberg, their belongings will be transferred to Viking Skadi, to which they will return after the excursion

6. June 16 Danube Waltz (Budapest to Passau) aboard Viking Legend — This itinerary may experience some delays due to the Altenwörth lock closure. If so, some minor itinerary alterations may be necessary.

7. June 16 Romantic Danube (Nuremberg to Budapest) aboard MS Vienna — Guests will embark MS Vienna in Nuremberg, as originally planned. There is a possibility that this cruise may experience some minor sailing delays and/or itinerary alterations due water levels still being comparatively high along the stretch of the Danube between Regensburg and Passau.

8. June 16 Vineyards & Vistas (Nuremberg to Trier) aboard Viking Prestige — This cruise is expected to proceed as scheduled.

9. June 16 Rhine Getaway (Amsterdam to Basel) aboard Viking Sun — This cruise is expected to proceed as scheduled.

10. June 16 Rhine Getaway (Basel to Amsterdam) aboard Viking Helvetia — This cruise is expected to proceed as scheduled.

12. June 19 Romantic Danube (Nuremberg to Budapest) aboard Viking Freya — This cruise will now take place on sister ship, Viking Odin (Longship, built 2012) and is expected to proceed as scheduled.

The following sailings have been canceled:

The line also pointed out how fluid the situation remains, and how diligently its onboard crews, Swiss operations team, and Californian-based people are working on ensuring that cruises operate with a minimal amount of impact.