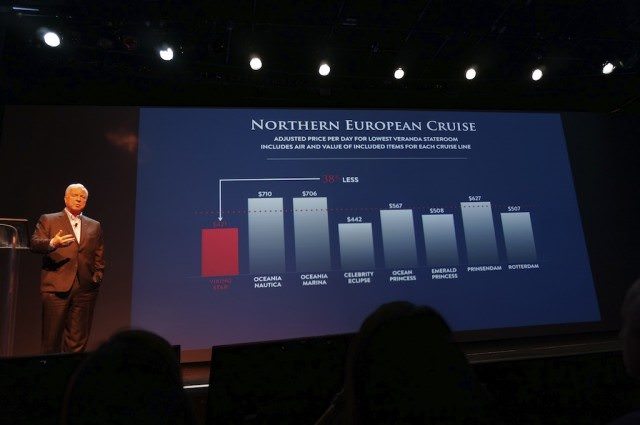 THE BEVERLY HILTON, BEVERLY HILLS, CALIFORNIA — Perhaps the biggest surprise announced last night during the Viking Ocean Cruises’ reveal: lead-in per diems at just under $300 per person with included WiFi, an included tour in each port of call, overnight stays in embarkation and disembarkation ports, and complimentary beer and wine with lunch and dinner.

When bookings open on Friday May 17, the new Viking Star’s 15-day cruises between Bergen and Stockholm will go for $4,499 per person for accommodations in a 270-square-foot Veranda Suite, featuring a king-sized bed, a sitting area, an expansive balcony, and  a large bathroom with a shower spacious enough to bathe in “without touching any of the walls,” says Torstein Hagen, chairman of Viking River Cruises, and, as of last night, Viking Ocean Cruises.

In developing the concept for Viking’s ocean product, Hagen wanted a no-nonsense ship that delivered in seven key areas:

There will be no casino, no charge for speciality restaurants, no formal nights — and no ties. The vessel will carry 928 passengers, all double occupancy veranda staterooms (in several categories and some suites), not family friendly but appealing to “explorers” ages 55 and up.

Speaking from the same stage where the Golden Globe Awards ceremony is presented annually, Hagen displayed renderings to media and some of the nation’s top cruise sellers that showed Viking Star to be innovative — with sliding windows that open in the main dining room for al fresco dining, a spa that features a sauna and snow room, a forward-facing two-level Explorer’s Lounge, an infinity pool with an aft glass wall exposed to the sea, and much more.