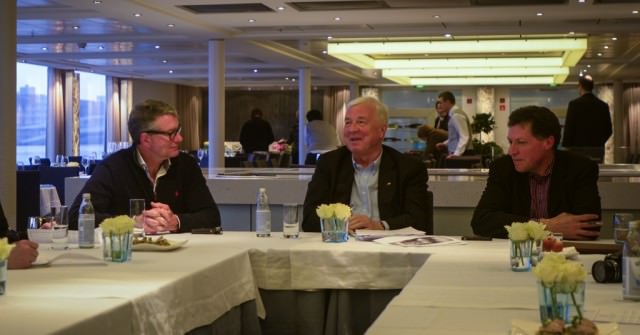 The invitation suggested it was going to be an intimate cocktail hour with Torstein Hagen, the outspoken chairman and CEO of Viking River Cruises, to celebrate the simultaneous naming of 10 Longships (see 100 Viking Longships by 2020? That’s Tor’s Vision. Today, 10 Ships Christened In Amsterdam, A World Record)

It soon morphed into a 75-minute press conference with a 60-minute opening statement by the chairman. Hagen presented detailed evidence to support the case that Viking was not only the biggest and best-run river cruise company, but also offered the finest product at a terrific value. There were suggestions that Viking was not merely dominant but responsible for creating the demand that has made river cruising the fastest-growing segment of the travel industry.

Hagen praised his management team as “the most professional” of any river cruise line and underscored that Viking was “a real company,” with significant assets, 2,500 employees and ambitions to become more involved in capital markets to fuel further growth.

But it also became clear that Viking adheres closely to the personal vision, preferences, tastes and economic philosophy of the man who owns 95% of its equity.

Hagen described his target audience as “people with some curiosity, who have worked hard and earned some money. They haven’t had time to see these places — and not just see, but experience the culture. They’re grown-up people. They speak English. They are 55-plus.”

He’s equally clear about people he is not interested in: “We have no need whatsoever to say we want some younger people onboard. If you have teenagers, then you should go somewhere else. We don’t encourage [inter]generational travel. We market to North Americans, Brits, Australians. Nothing else. No Turks, no Brazilians. They may sneak on a person from Hong Kong or whatever, but the language is English, and it’s the ambience of these types of people [that we strive for].”

And if that’s not clear enough: “It is for people like me who want to have a quiet time and travel with people like myself.”

“I’m a minimalist,” he said. “Because there are a lot of women around, we have to have some decor, some style, but we try to make it simple, because we’re in a very small space. [Due to restrictions on ship size along Viking’s main itinerary, Amsterdam to Budapest, its Longships are built to a length of 443 feet, a width of 37 feet and a height of 20 feet.] And within those parameters, you can innovate as much as you want. But if you clutter it with too many things, the space gives a much smaller impression.”

In sum, he said, “So we are not a boudoir cruise line. If you want to go with a boudoir, you know who you can go with.”

Though Hagen would not clarify the reference, one journalist guessed Uniworld Boutique River Cruise Collection, a line that, most would agree, does not have a minimalist aesthetic. He replied only, “We are clean and tidy in what we do.”

By and large, the river cruise operators adhere to the unspoken rule of the ocean-cruising community: Do not criticize thy competitor on the record. Hagen delights in testing — some might say stretching — the boundaries of this tenet, and when it comes to ocean cruise lines, all bets — and gloves — are off.

Some Hagenisms uttered during his presentation:

Read the rest of Arnie Weissmann’s story as well as comments from other river cruise executives on Travel Weekly.