A representative from Guinness World Records was at the Passenger Terminal Amsterdam today to certify that Torstein Hagen and his Viking River Cruises had staked a new claim in the record books: 10 ships christened at once, a remarkable achievement for a man who told a standing-room-only audience of around 700 that he had lost everything in 1997 and rebuilt from nothing what has become the world’s largest river cruise company.

Like the mythical Phoenix, Hagen rose from the ashes to create a company that now has more than 40 percent market share in river cruising (from 16 percent in 2007). His is an inspiring American-can-do story for a 70-year-old originally from Norway who shows no sign of slowing down.

Perhaps the most surprising proclamation to come from Tor, was that he envisions his company will operate 100 river cruise vessels by 2020, a mere seven years away, we remind you. 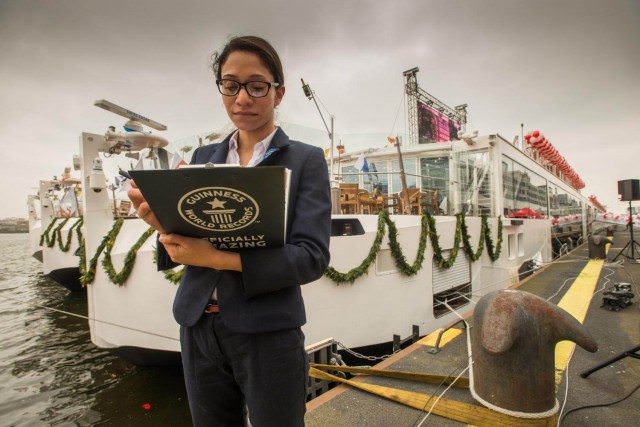 A Guinness World Records’ adjudicator certified today’s christening event as “The Most Ships Inaugurated in One Day by One Company.” photo courtesy Viking River Cruises

Viking River Cruises, along with several other river cruise operators in the United States, created a market that shows huge upside potential thanks to a burgeoning baby-boomer market in search of soft adventure, a product that river cruising delivers exceptionally well.

“It’s about people of some curiosity who have worked hard, earned some money . . .  and haven’t had time to see these place on earth,” Hagen says, referring to Europe and other destinations where Viking operates.

The world record also represents a feather in the cap for the port and city of Amsterdam, a popular hub for both sea-going vessels and river cruisers.

Check out our coverage: