Melk, Monasteries and the Wachau Valley 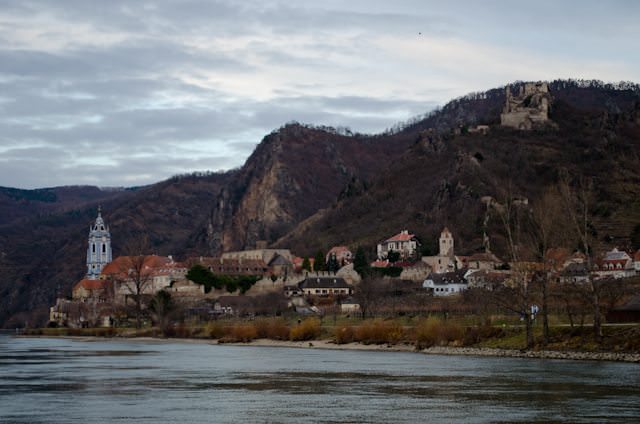 (as originally published on our sister-site, From the Deck Chair)

This morning, the sun managed to peek through the clouds as Viking River Cruises’ Viking Freya made her way through the stunning Wachau Valley, bound for the Austrian town of Melk.

Stretching from kilometer 2004 to 2034 along the River Danube, this part of the river represents scenic river cruising at its finest. Famous for its white wines, the Wachau Valley is littered on both banks with vineyards that step dramatically up the surrounding hills and mountains. Interspersed in-between are storybook towns and villages, all anchored by their own uniquely designed cathedrals. 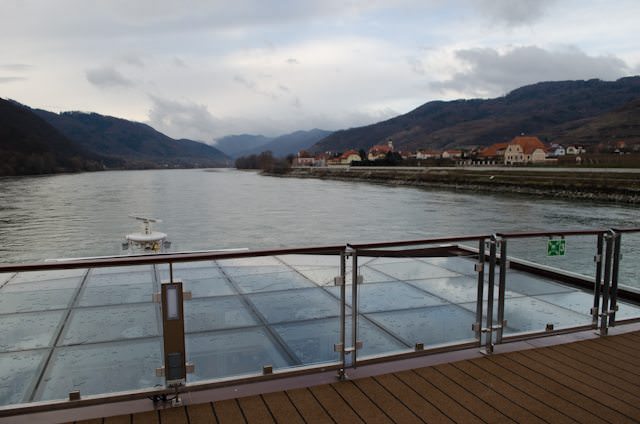 Being winter, smoke can be seen over the hills long before you arrive in a town; a sign of wood-burning fireplaces at work. Much of these are untouched, appearing as they would have hundreds of years ago. Just after 9 a.m. this morning, we passed one of my favorite towns along the Wachau Valley: Durnstein. 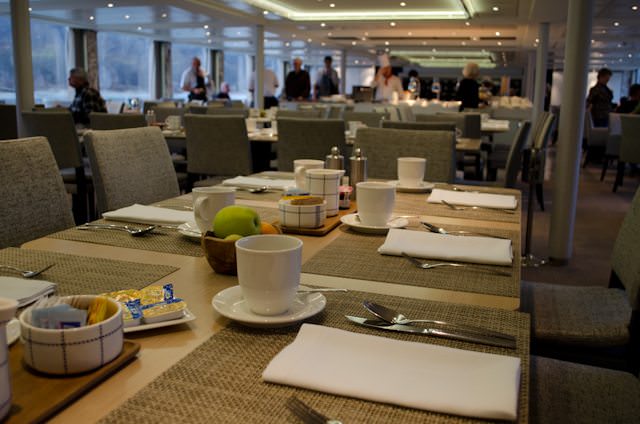 Breakfast in the main dining room aboard Viking Freya; a great start to the morning. Photo © 2012 Aaron Saunders

Durnstein is easily identifiable by its blue-and-white baroque church, but it’s famous for the medieval ruins of Kuenringer Castle, perched on the hillside high above the town. King Richard the Lionheart found himself an unexpected “guest” at the castle, imprisoned here after Duke Leopold V of Austria figured Richard had run his mouth one too many times. The King would have the last laugh, though: The Pope excommunicated Duke Leopold for imprisoning a fellow traveller. Richard was set free, and the Duke vanished into obscurity. 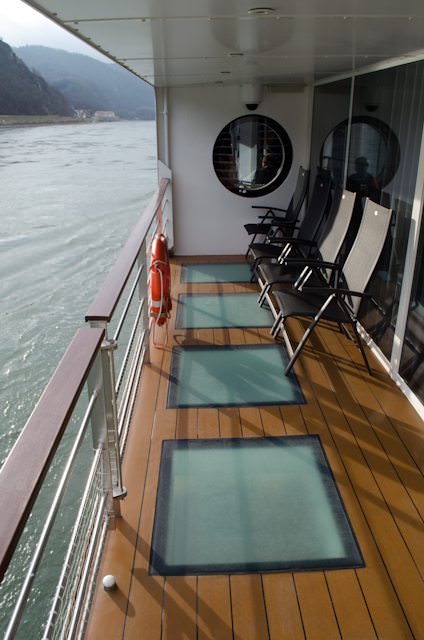 And so on the morning went, with guests taking in the views of each successive town and village from the warmth and festive comfort of the Viking Lounge, or forward on the Aquavit Terrace. A few, including myself, braved the chill in the air to take in the sights on Viking Freya’s open Sun Deck. And it is worth bundling up for: You’ll rarely sail more than 15 minutes in a single stretch without seeing something noteworthy. 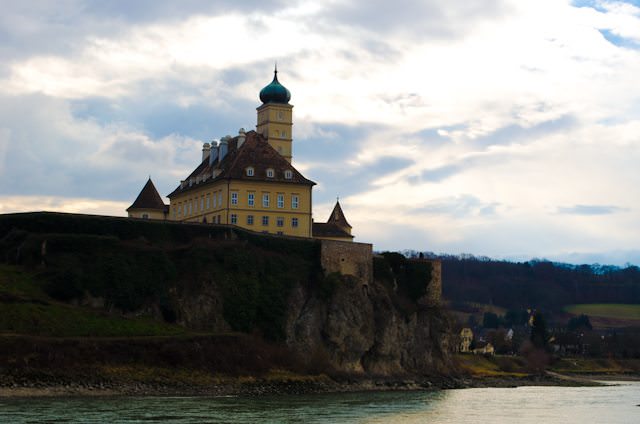 This is my third experience sailing the Wachau Valley – and it’s lost none of its magical pull.

And even though this is my third river cruise down the Danube, I’ve seen something different every time. The repeat value of river cruising is enormous, particularly with so many potential ports of call along the way. My only problem is I wish we could stop at each little town on the way to Melk. 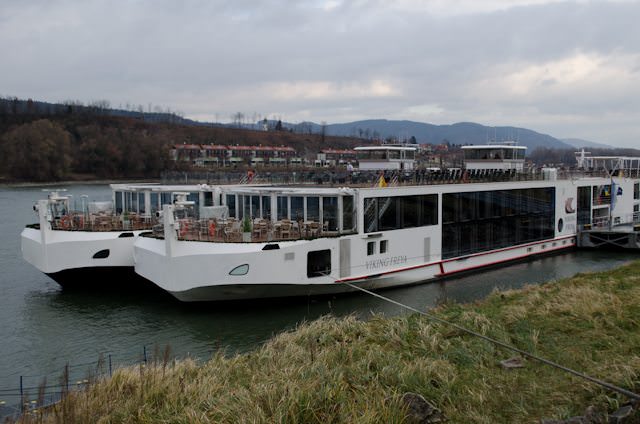 One sight you definitely want to be out on deck for occurs just before you arrive in Melk on these Westbound runs: the sight of Schonbuhel Castle.

Perched high atop a rocky outcropping, the Castle is known as the “Watchman of the Wachau” for its imposing nature. Not only is it remarkably photogenic, it’s also historic: The castle has sat here for the past 1,100 years.

Anchored by the vibrant yellow Melk Abbey, the cozy village of Melk has been home to the Benedictine monks for more than 900 years. The Abbey is breathtaking both inside and out; it is home to both a 85,000-volume Library and spectacular views of the town itself and the Danube that winds its way past the town. 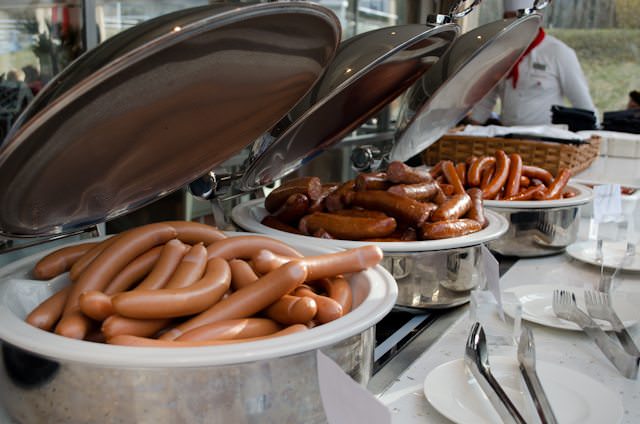 Sausages of every kind. A staple of the Austrian Lunch offered this morning in the Viking Lounge. Photo © 2012 Aaron Saunders

After our 11 a.m. arrival in Melk, an Austrian buffet was held in the Viking Lounge, complete with accordion music performed by a local artist. Hotel manager Cornelia even donned a traditional Austrian dress and served up some tasty Austrian beer. 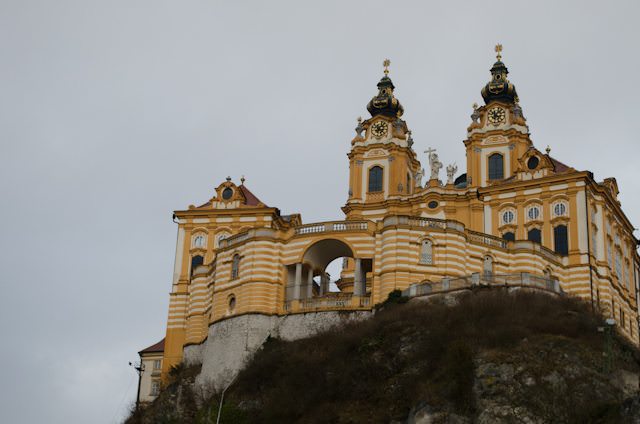 The imposing Stift Melk towers over the town itself. Photo © 2012 Aaron Saunders

On my first river cruise nearly one year ago, I explored the Abbey – and it’s gorgeous, well worth a visit if you’ve never been before. But I wanted some exercise, so I opted to walk to the Abbey and join the tour group there. If you’re up for a 20-minute walk, I highly recommend this. 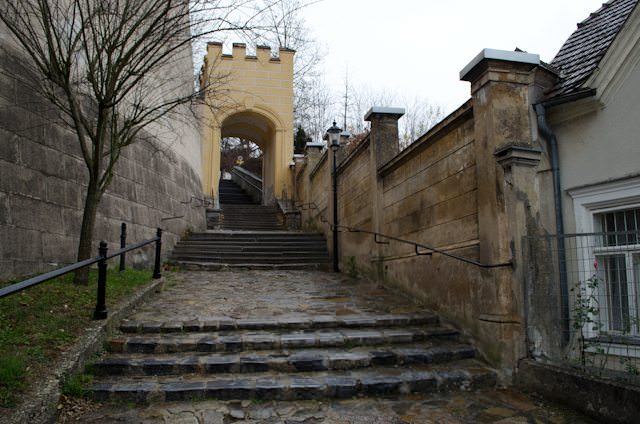 The walk takes you along some beautiful riverbank scenery before arriving in the town of Melk itself, which is charming in a quiet, unassuming sort of way. Just keep walking up the main street until you hit signs that say Stift Melk; you’ll find yourself on a pathway that looks like it belongs to someone’s backyard; it doesn’t – keep going for some remarkable views. 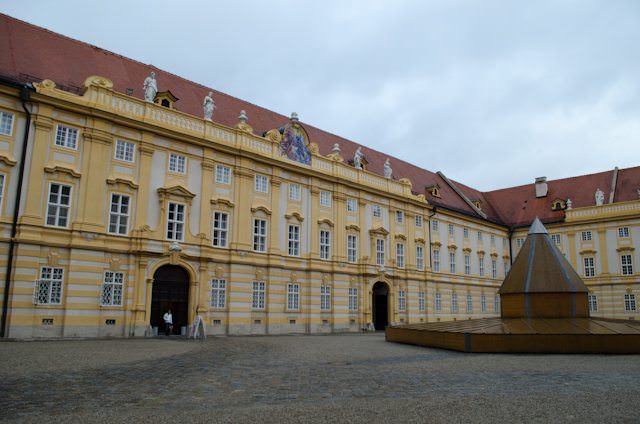 One of the nine courtyards on-site at Stift Melk. Photo © 2012 Aaron Saunders

One of the things that impressed me about the Abbey is just how engaging it is; guides are tremendously knowledgeable about the history of the Monks and the building itself. Even though I was here last December, I still found new things to discover. I also learned that, like my past visit, the Benedictine monks don’t particularly believe in central heating – it’s quite cold in many parts of the Abbey. 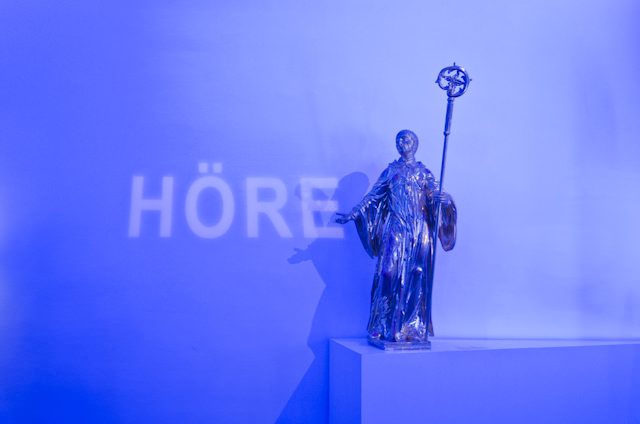 The Abbey’s interpretive center outlines the history of Stift Melk and the Benedictine Monks in a vibrant, creative fashion. Photo © 2012 Aaron Saunders

But the treasures the Abbey contains are immense. Traditional ceremonial cloaks that look like they weigh a hundred pounds; bejeweled scepters, wands and staffs are on display; historic documents and even a working model of a re-useable coffin that featured both a swing top and a swing bottom for easy “disposal.” 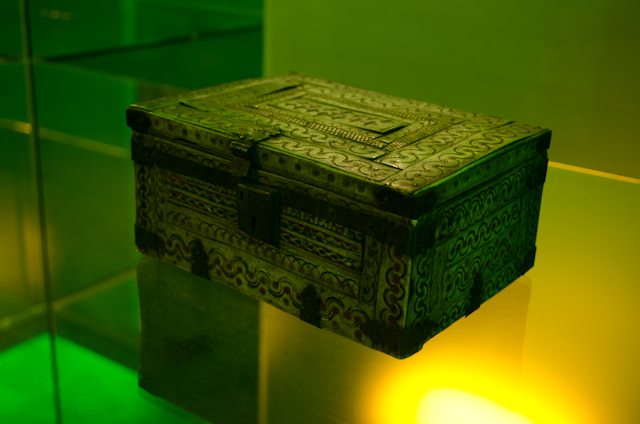 On my way back from the Abbey, I was pleased to discover one of my favorite shops sitting right on the corner. The Wachau Valley is treasured not just for its wines, but also for its exquisite apricots. I first discovered Wieser while in Durnstein in October – a small distillery that has been making fine wines, liqueurs and spirits in a 1,000-year-old house. And its Apricot Liqueur is absolutely stunning – great in a hot cup of tea, or on its own. The shop also has some pretty darn tasty whiskies and gins, along with marmalade and even gummy apricots, which I avoided purchasing this time, as I managed to eat the entire tin of them before reaching Passau last time. 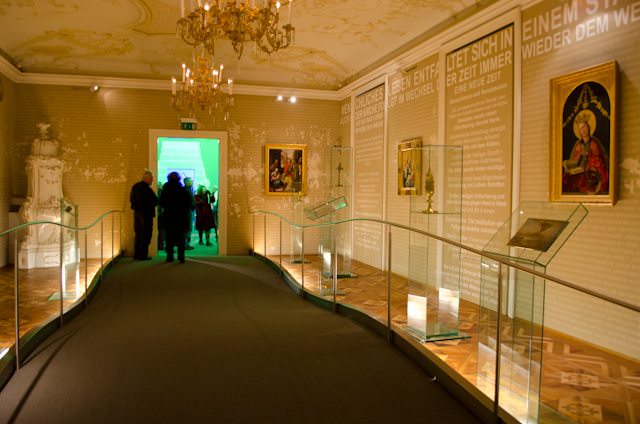 Exhibits are creative, engaging and elegant at Stift Melk – but the best is yet to come. Photo © 2012 Aaron Saunders

But one of the greatest pleasures of river cruising is just that – sailing down the beautiful waterways of Europe. With so much floor-to-ceiling glass used in her construction, Viking Freya and her sisters are uniquely suited to this task. With the exception of the main stateroom corridor, there’s not a single place aboard her where you cannot see the passing scenery. 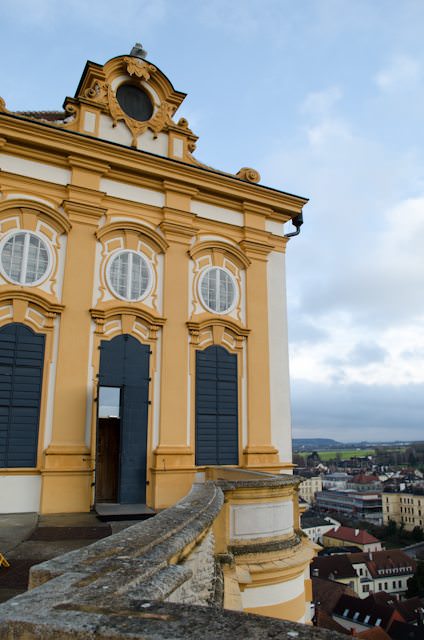 The outdoor promenade of Stift Melk runs from the ballroom to the amazing, jaw-dropping Library featuing over 87,000 individual titles. Photo © 2012 Aaron Saunders

If you’re a first-time river cruiser, Viking Freya sets the bar high. It’s not that the more traditional river cruise ships are bad; far from it. But Viking River Cruises and the Norwegian design firm of Yran & Storbraaten really pulled out all the stops when constructing Viking Freya and her Longship sisters. 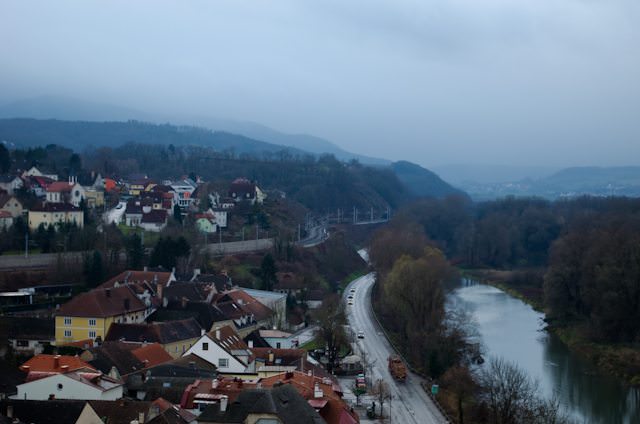 Looking out over Melk and the surrounding Wachau Valley. Photo © 2012 Aaron Saunders

To start with, the architects shifted the cabin corridor off the centerline and over to the port side of the ship by one meter; this allowed them to effectively design staterooms that featured a step-out balcony without having it cut into the available square footage, while allowing them to “rotate” the staterooms on the port side to create true suites with two separate rooms. Suites on many river cruise ships are simply a much larger room that lacks the standard divisions many guests – particularly from the cruising world – have come to expect. 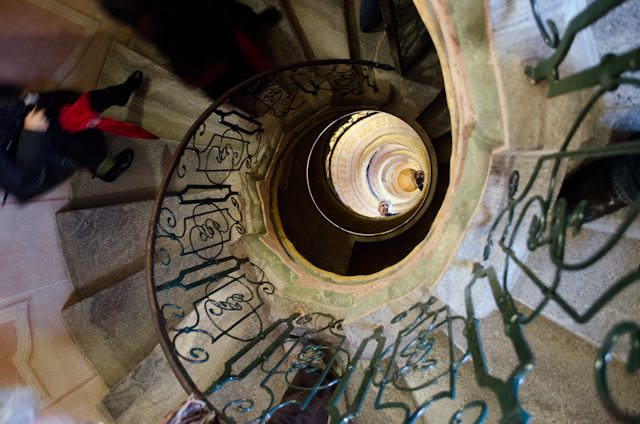 The spiral staircase leading down to the Cathedral in Stift Melk. Note the optical illusion at the bottom of the stairwell … Photo © 2012 Aaron Saunders

Finally, this arrangement also let Viking create two expansive “Explorer’s Suites” located all the way aft on Deck 3. If you’re unimpressed by these massive spaces, which include a dual-vanity bathroom with rainforest shower; a separate bedroom; an entertaining area; and even a wraparound balcony, I feel sorry for you, because there’s truly nothing else on Europe’s waterways like them. 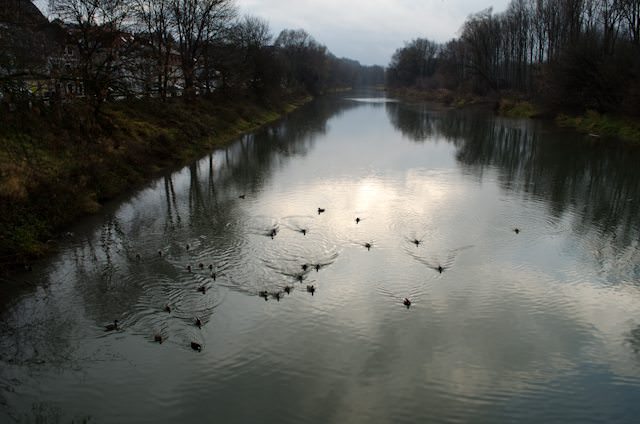 Ducks float along one of the canals near Melk, Austria. Photo © 2012 Aaron Saunders

The décor in all staterooms and suites is gorgeous; it’s modern and soothing, but never overbearing. I’ve never seen so many lighting options in a single room (there’s six different sets of lights in each room, including overhead ones on a dimmer switch) and even a digital thermostat that looks like one of the first-generation iPods.

Finally, if you’ve never river cruised before, you’ll take the dual European & North American power outlets for granted. These are rarer than rare; most ships feature just European plugs. Ditto for the gorgeous Viking Restaurant; half-height windows – or smaller – are common in the dining rooms on the majority of river cruise ships. 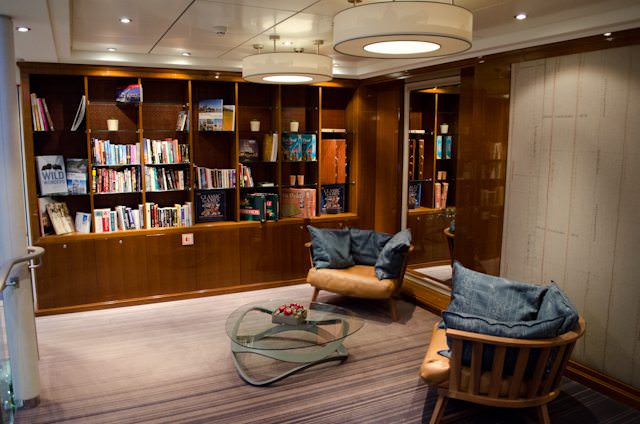 A small onboard Library is packed with books on the Danube and the Wachau Valley. Photo © 2012 Aaron Saunders

Viking Freya is equipped with solar panels on her upper deck. She also has her own onboard herb garden, and her hybrid drive diesel electric powerplant is eco-friendly and whisper-quiet. Curiously, the Longships lack a hot tub and gymnasium and spa facilities. Having never used either on my previous river cruises, I’m not too upset about that, though a dip in a hot tub would be nice, given the chilly weather. 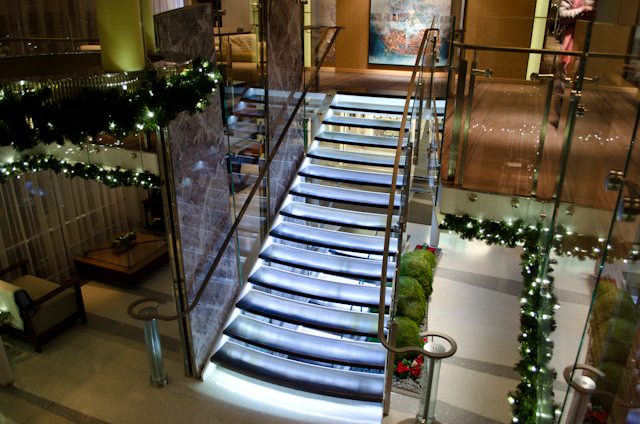 The beautiful staircase aboard Viking Freya at night; arguably one of the most stunning locations onboard. Photo © 2012 Aaron Saunders

What I really love about these ships is that Viking was willing to go out there and try something big, bold and different. Did everything work right the first time? Of course not; the changes between Viking Embla and Viking Freya indicate that the line is consciously tweaking the design ever so slightly, relocating light switches, adding power outlets, and making improvements to wall treatments, soft furnishings and fixtures. In fact, that’s the biggest change I notice between these Longships and the other, more traditional river cruise ships I’ve been on: Viking isn’t just tweaking the ships; the company is tweaking the entire river cruise experience.

After three full days onboard, I like where Viking is heading.

As I started to type this, it has begun to snow. Not just a few flakes, either – it’s a full-on snowstorm topside. We’re in a lock, with the beautiful Viking Embla next to us. Both ships are lit up like a festive tree, and these enormous flakes of snow are absolutely raining down upon us, coating the Sun Deck with a thick layer of snow.

I couldn’t be happier. 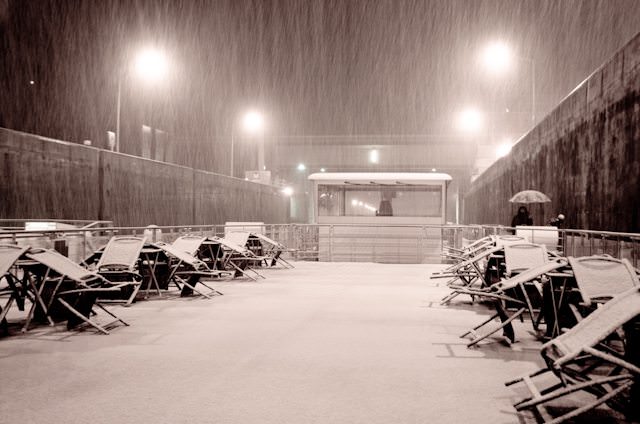 Our Live Voyage Report from onboard Viking River Cruises’ Viking Freya continues tomorrow as we trade Austria for a day of exploration in the German town of Passau.