It’s happened to all of us at some point: You’re touring in a large European city on your river cruise, turned loose in the shopping district or at a major historical site. Your guide points to her watch and says emphatically, “Meet back at the coach in an hour.”

Being the good traveller, you explore, learn, laugh, discover. And you return to the motorcoach park at the designated time —∂ƒ only to discover row after row of busses. Which one is yours?

Usually, you can locate your motorcoach by looking for the little cruise line sign in the windshield, but sometimes even this won’t help narrow your choices down. This happened to me recently in Budapest, as we were sightseeing at the Hero’s Square monument. I returned to the coach part to discover — to my horror — that there were about 30 different coaches there; a far cry from the dozen or so that had stopped when we initially got off. 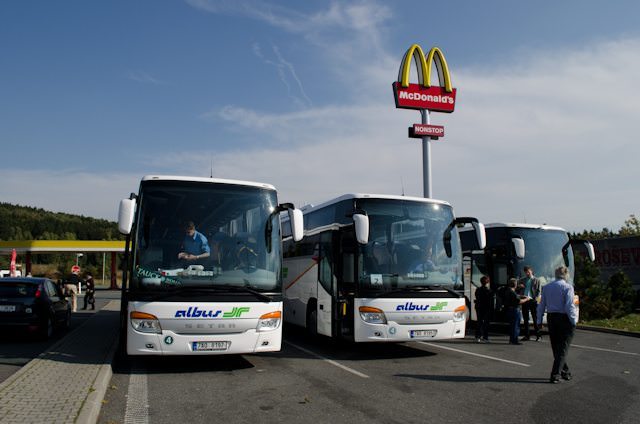 Dude, Where’s My Coach? Finding your touring bus can sometimes be a challenge. Photo © 2012 Aaron Saunders

For the most part, they were all white, all new, all built by the same manufacturer and operated by the same bus company.

So how did I find my bus? Well, I had some help — I spied our guide standing next to one of the motorcoaches and made a beeline for her. But had she not been there, I could have been in real trouble.

That was when I started taking a photo of the bus when I got off. 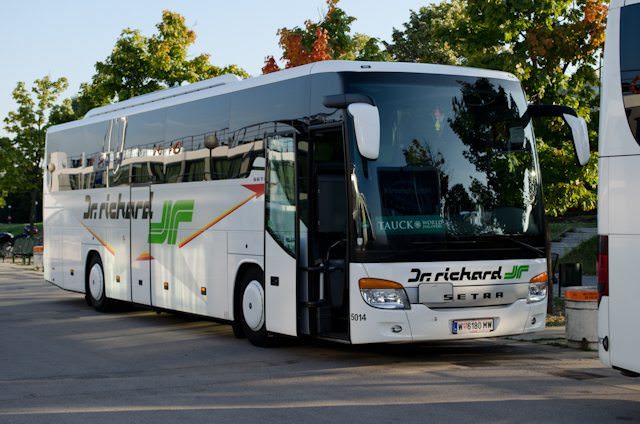 Now, I’d like to think I’m a pretty smart guy when I travel, but math was never my speciality, so memorizing the license plate was out of the question. But being an avid shutterbug, I began taking a quick snap of my assigned coach before getting on. And it proved to be hugely useful.

For starters, a bus can be identified by its license plate, but that can be long and confusing to quickly remember. Instead, I preferred to take a snap of the actual bus fleet number, which is almost always painted on the front or the side by the door. That way, if the river cruise line sign should fall off the window it’s mounted on (it’s been known to happen!), I’m still covered.

I started talking to my fellow guests about how they remember which coach they’re on. A few of them memorized the last few digits of the license plate number, but here’s a trick: In Europe, don’t bother trying to memorize the first few letters; more than one vehicle can have those, as they denote the city it is registered in. 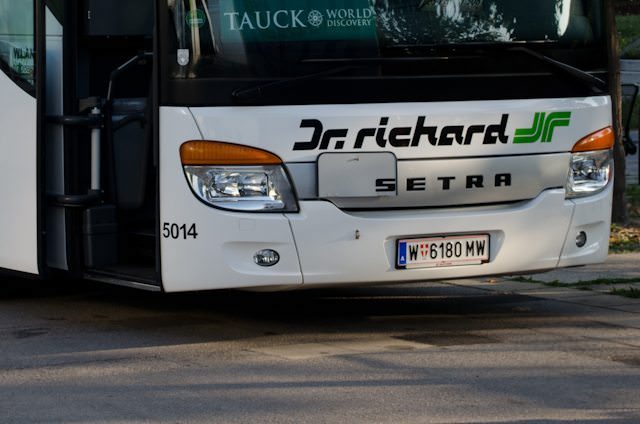 Both the bus fleet number, on the left, and the license plate can be an enormous help in quickly identifying your motorcoach while on tours ashore. Bonus question — can you tell what city this bus is from? Hint: the “W” in the license plate is a clue. Photo © 2012 Aaron Saunders

A few guests looked for some defining feature on the bus, but this doesn’t work so well in Europe where busses tend to be new and impeccably maintained.

But, with nearly every single passenger carrying a camera of some sort — be it traditional or mounted in an iPhone or iPad ‚ nearly everyone can take a quick snap of the coach number before stepping on or right after stepping off.

For me, taking a quick photo of the bus allowed me to refer back to it when entering busy motorcoach parking lots, and helped me to quickly find my coach every time.

So give it a try on your next river cruise; you might be surprised how much easier your touring can be.